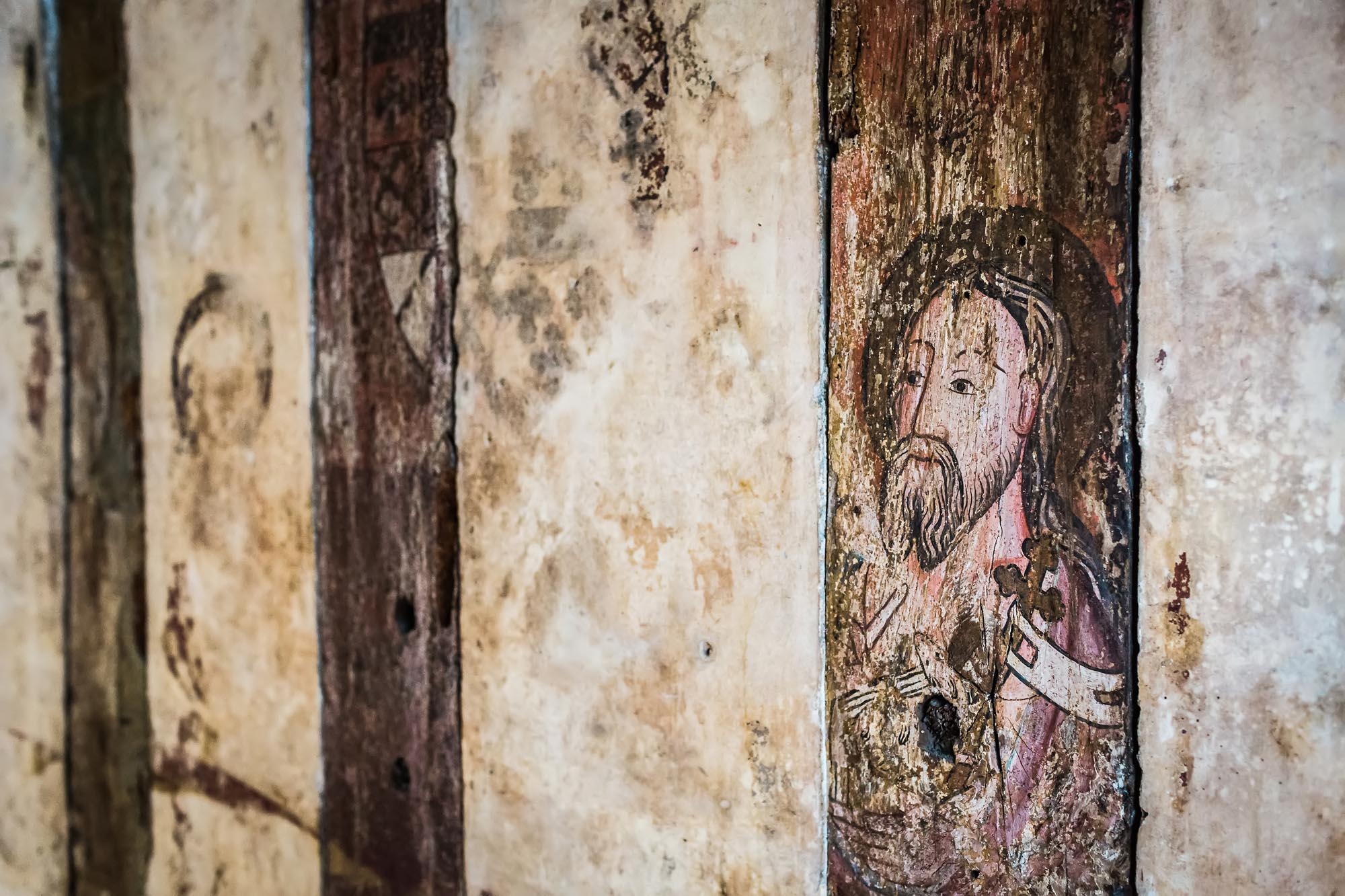 Close up of John the Baptist section of wall painting. Courtesy Shakespeare’s Schoolroom and Guildhall Trust

Ronnie Mulryne, professor emeritus at the University of Warwick and Trustee of Shakespeare’s Schoolroom and Guildhall, on their uncovered John the Baptist wall painting

It is extraordinary for a mediaeval painting to survive in so fresh, clear and lifelike a way.

It’s life-size and painted in a way which brings out some of the human characteristics of John the Baptist, conveying posture and the manner in which he glances with an enquiring look in his eyes towards the Throne of Mercy painting, the centre of the great Trinity painting dominating the middle of the wall.

The Guildhall itself, dating back to the early years of the 15th century, is an unusual survivor among guildhalls, in that it is very much the same as it has been over the centuries. We knew the wall paintings were important, so we had conservation work done on them in 2004, which underlined their significance.

We later employed a firm of conservators, Perry Lithgow, to work on what we could see of their remains and during the course of the work a conservator, Mark Perry, made a remarkable discovery – the emergence of the figure of John the Baptist which had lain hidden for centuries on one of the studs to the right of the paintings. 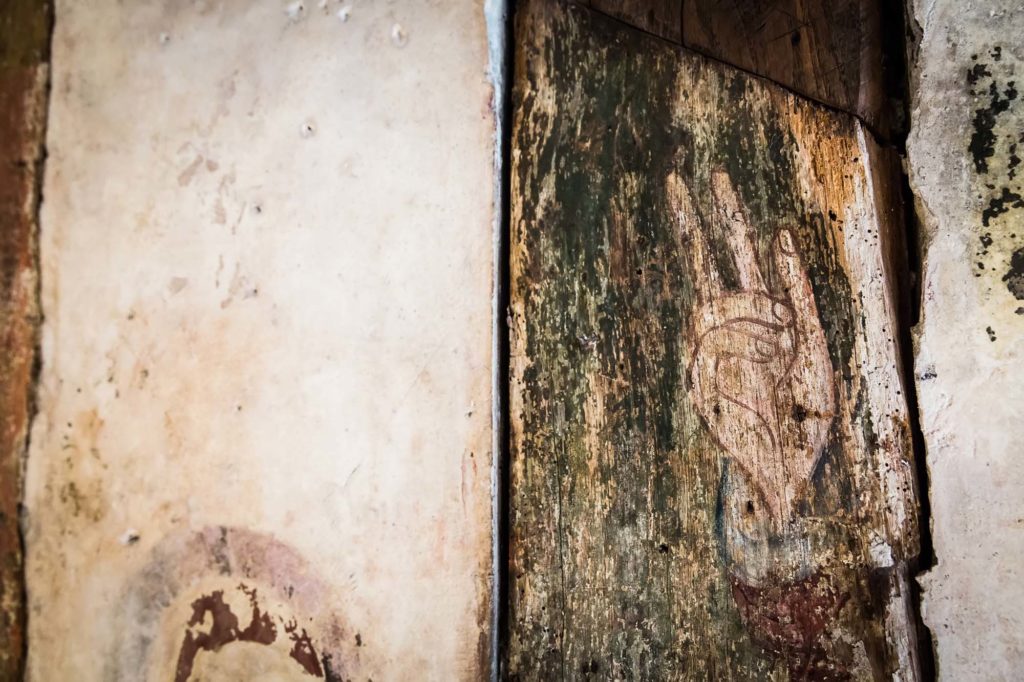 A close up detail of the medieval wall painting. Courtesy Shakespeare’s Schoolroom and Guildhall Trust 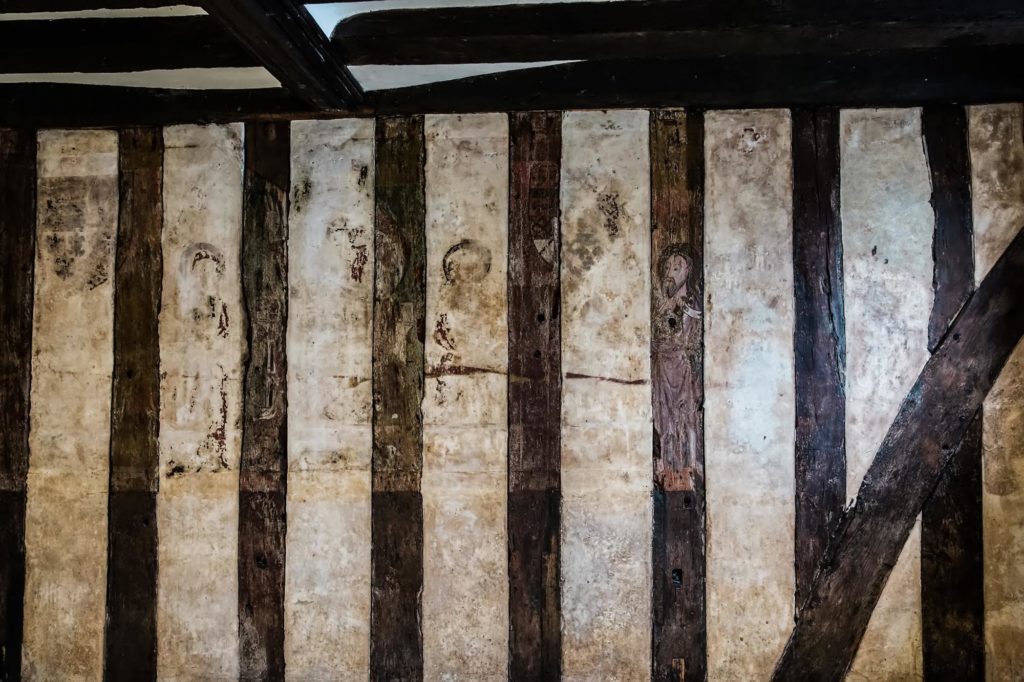 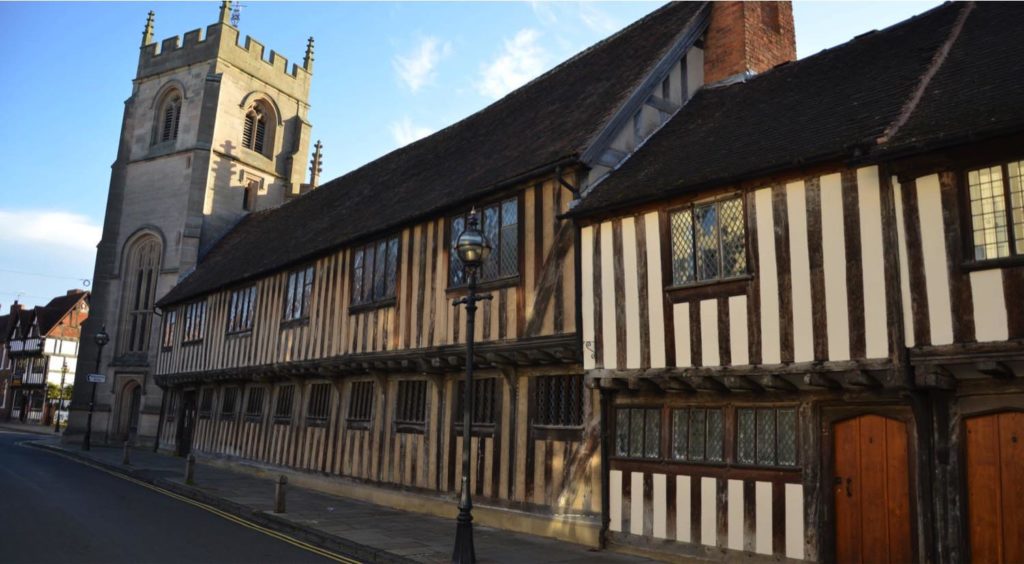 The Guildhall served as the headquarters of the religious Guild of the Holy Cross, which before the Reformation had responsibility for a great deal of the civic life of the town. We did a lot of documentary and archaeological research on the building and one of the discoveries was that the southern end of the lower Guildhall was in fact a priest’s chapel. The paintings on the gable wall formed a ‘reredos’ for the altar in the chapel.

In John the Baptist’s case he can be identified by the book he holds together with a cross and a lamb. These correspond to his association with his phrase, Ecce Agnus Dei, ‘behold the lamb of God’.

On either side of this central ensemble are the royal arms of England and France quartered. In the 15th century when these were painted, England laid claim to sovereignty over France.

An interesting point is that the quarters have been transposed so that the English lions appear where France’s fleur-de-lis should be, and equally the other way round. How that mirror image came about we don’t know. 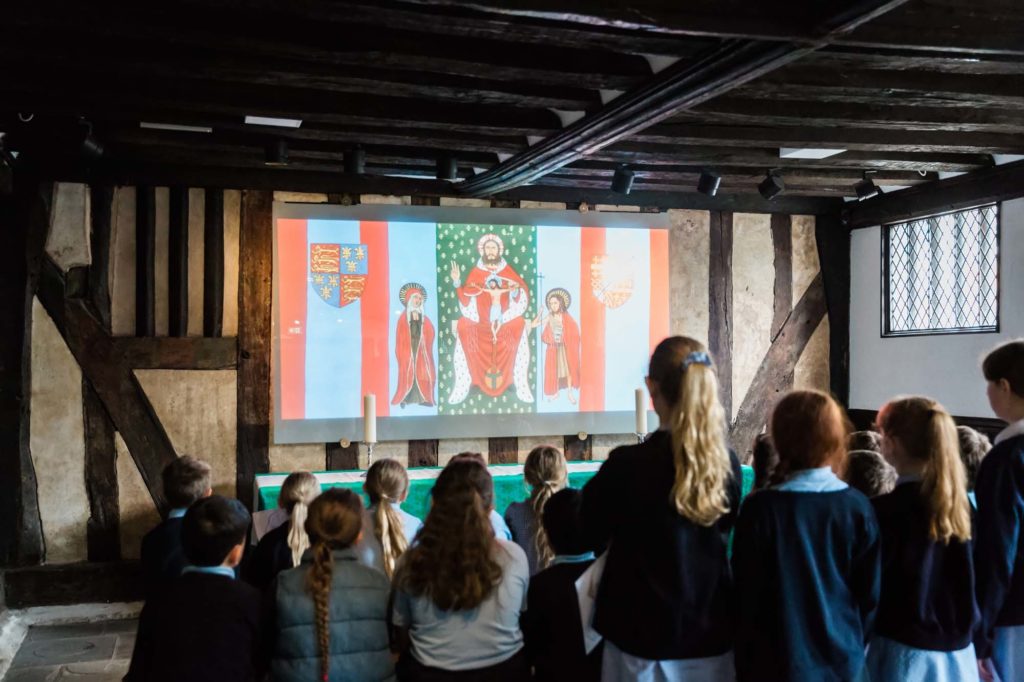 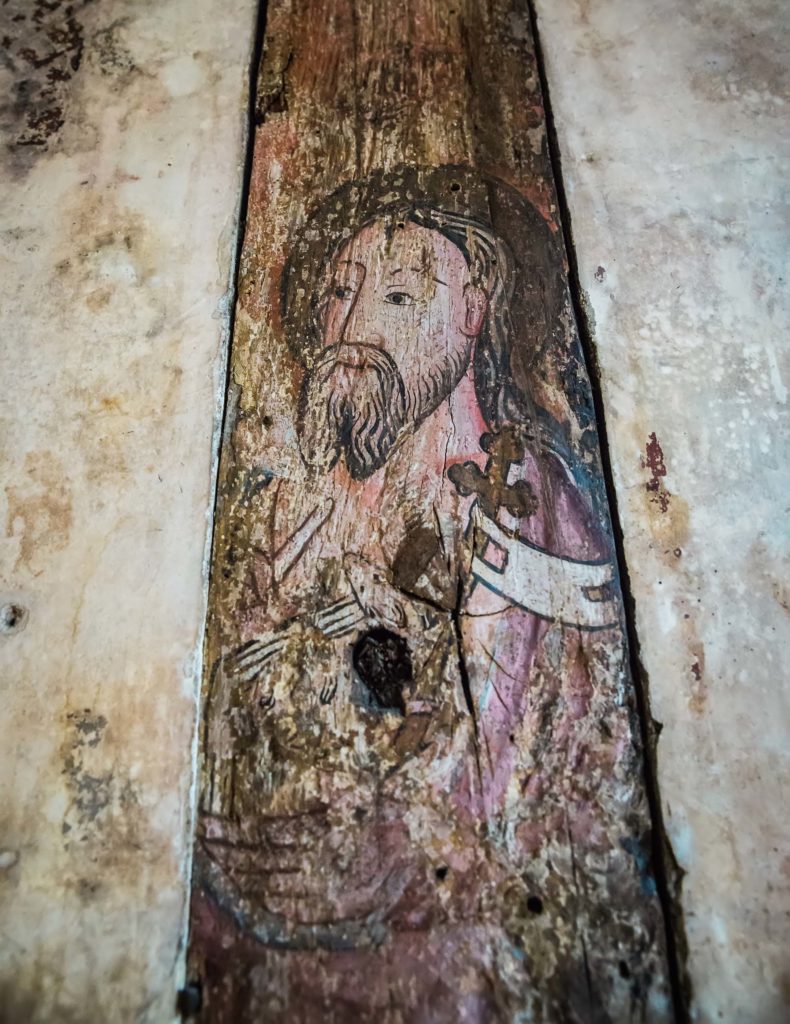 Close up of John the Baptist section of wall painting. Courtesy Shakespeare’s Schoolroom and Guildhall

On the right-hand side of the painting as we look at it are the arms of the Beauchamp – Despenser family. The Beauchamp family included the famous Earls of Warwick, who were so very influential in the town of Stratford and its area.

What you have, therefore, is a religious painting flanked on either side by a political acknowledgement of power in the form of the royal arms and the arms of local magnates.

We’re not sure when the painting was covered over, but it’s very likely that it was concealed in some way during the Reformation and may have been lime-washed in 1547 when the Guild of the Holy Cross was dissolved – at the same time as the College of Priests at Holy Trinity Church.

“The reveal when the screen is raised is quite remarkable.”

We use a retractable screen to protect the wall paintings from the light falling on them, which has damaged them over the centuries. We can’t expose them for more than a short time, but the form in which they would originally have been seen is projected on to the screen, the outcome of brilliant work by Dr Kate Giles and other members of the archaeology department of the University of York.

The reveal when the screen is raised is quite remarkable. The figure of John the Baptist is the one that really comes out vividly and strong – the conservation work has made it so very clear. It’s on a stud, an upright timber, which has probably helped to preserve it. If it had been on one of the fragile intervening panels that run between the studs of the south wall, it would probably be in a deteriorating condition similar to the other paintings. 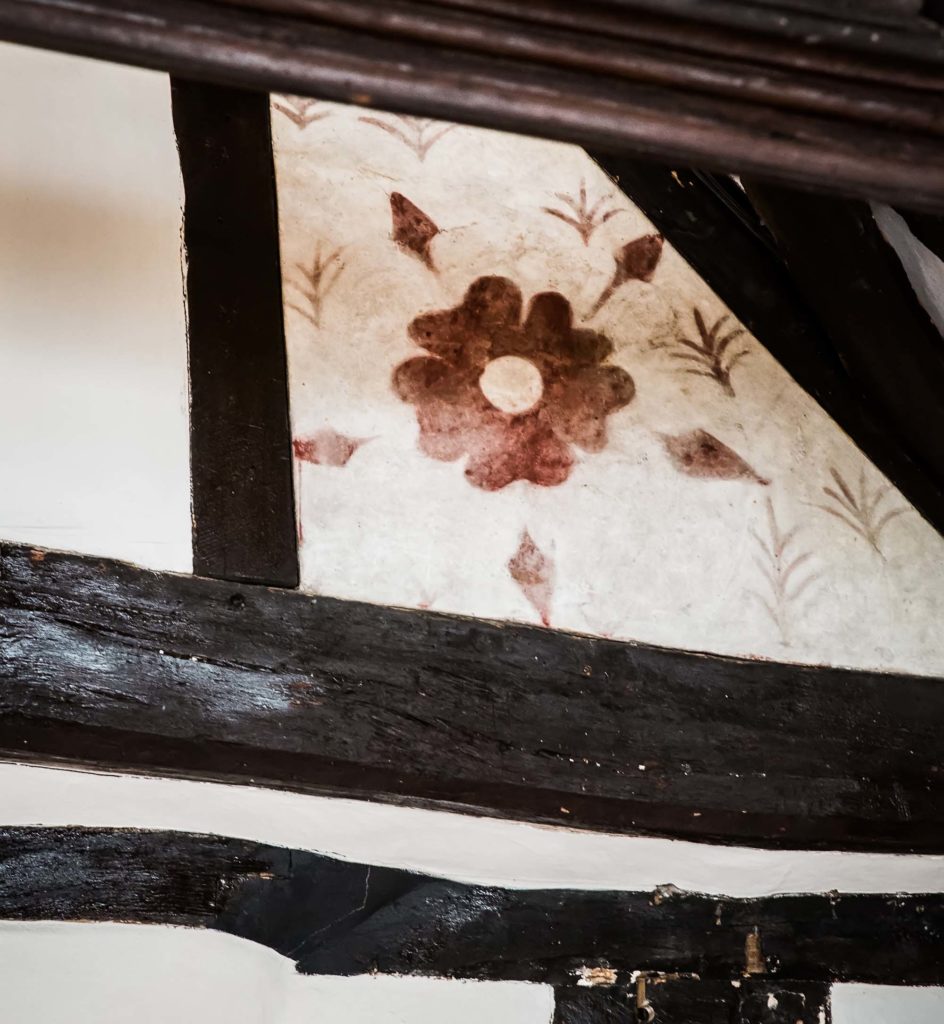 Tudor Rose decoration that appears around the building. Courtesy Shakespeare’s Schoolroom and Guildhall 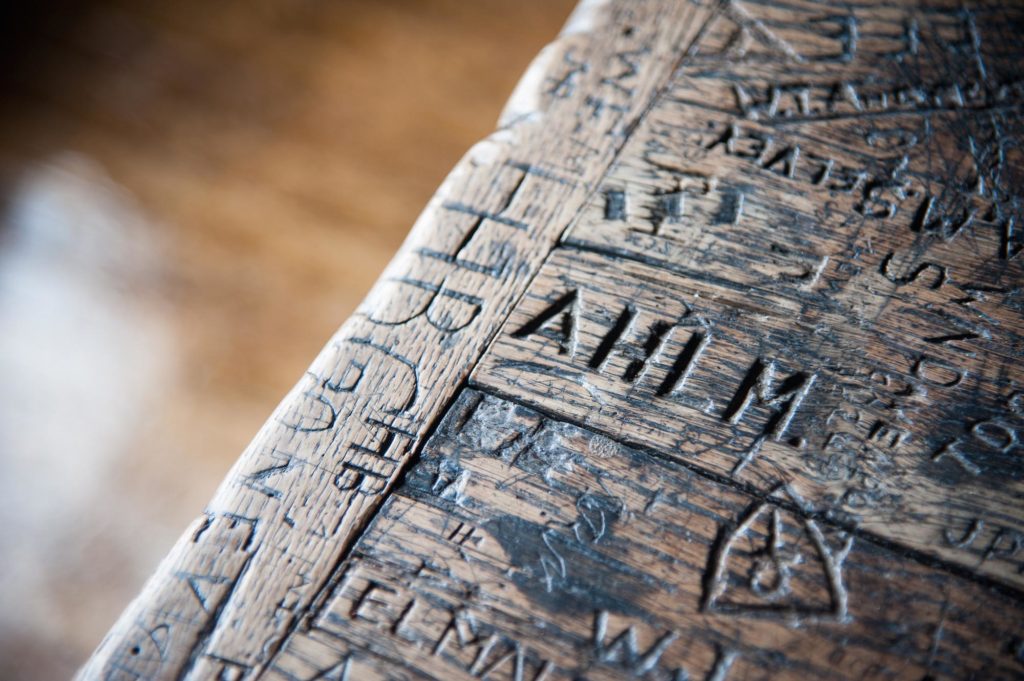 Etchings made by generations of students into the desks in the Georgian Classroom. Courtesy Shakespeare’s Schoolroom and Guildhall

Shakespeare was at school in the same building. His schoolroom, which we’ve recreated, is directly above the priest’s chapel. He was at school from about 1571 to 1579, a regular period of schooling in those days. We’re convinced he was inspired to become a playwright in the schoolroom – part of the curriculum were Latin plays by authors such as Plautus and Terence, which the boys performed.

There are still new things to be discovered in the building. The so-called Master’s Chamber, upstairs next to the Schoolroom, has Tudor roses from the beginning of the 16th century, and wall paintings showing symbols referring to the ragged staff motif of the Earls of Warwick. We believe they may extend right round the Master’s Chamber, but they have been covered by subsequent painting. We don’t have the resources at the moment to uncover them, though no doubt there will be a time when we do.

The Guildhall is a relatively small space; it was after all a guildhall in a relatively ordinary town in the middle of England, a town of about 2,000 people at the time. But my goodness it’s packed with history.

Find out more about Shakespeare’s Schoolroom and Guildhall at www.shakespearesschoolroom.org