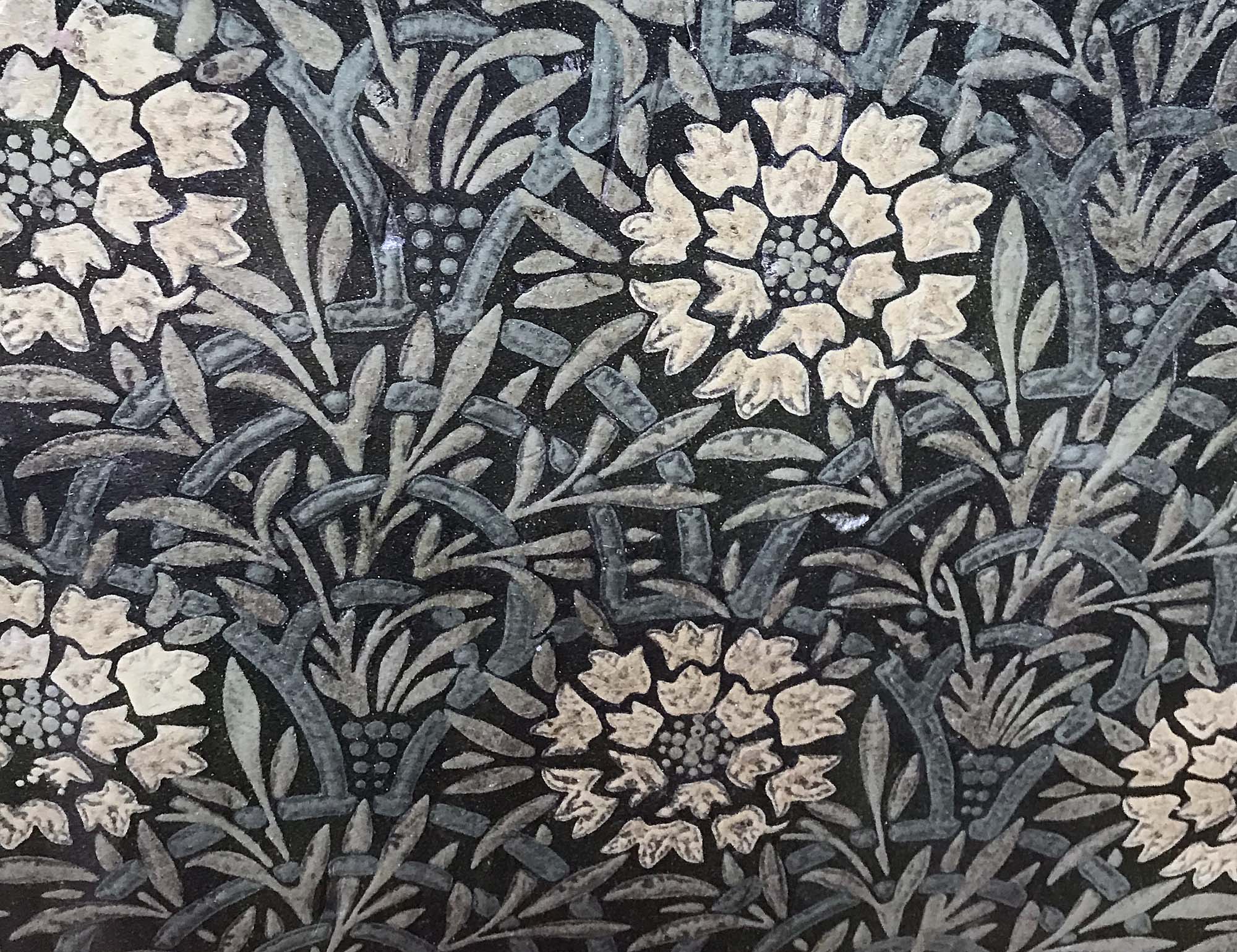 This is the original and only linoleum produced by William Morris. In the Morris & Company catalogue it’s called corticine floor cloth and has a kind of arched marigold design – arches with marigolds.

It was a very popular and affordable floor covering, but now it’s become incredibly rare. Obviously, because it was used as a floor covering, it got walked on, it became dirty and damaged, and consequently when it was beyond repair in a lot of cases it was just thrown away. So that means there are very few survivors.

At Emery Walker’s House we have one of the few remaining survivors still in situ; when you come in to the entrance hallway, you’re walking on the original lino that was there. In the adjoining reception room we’ve recreated a modern version, which is almost identical to the original, as part of the Arts & Crafts Hammersmith project. 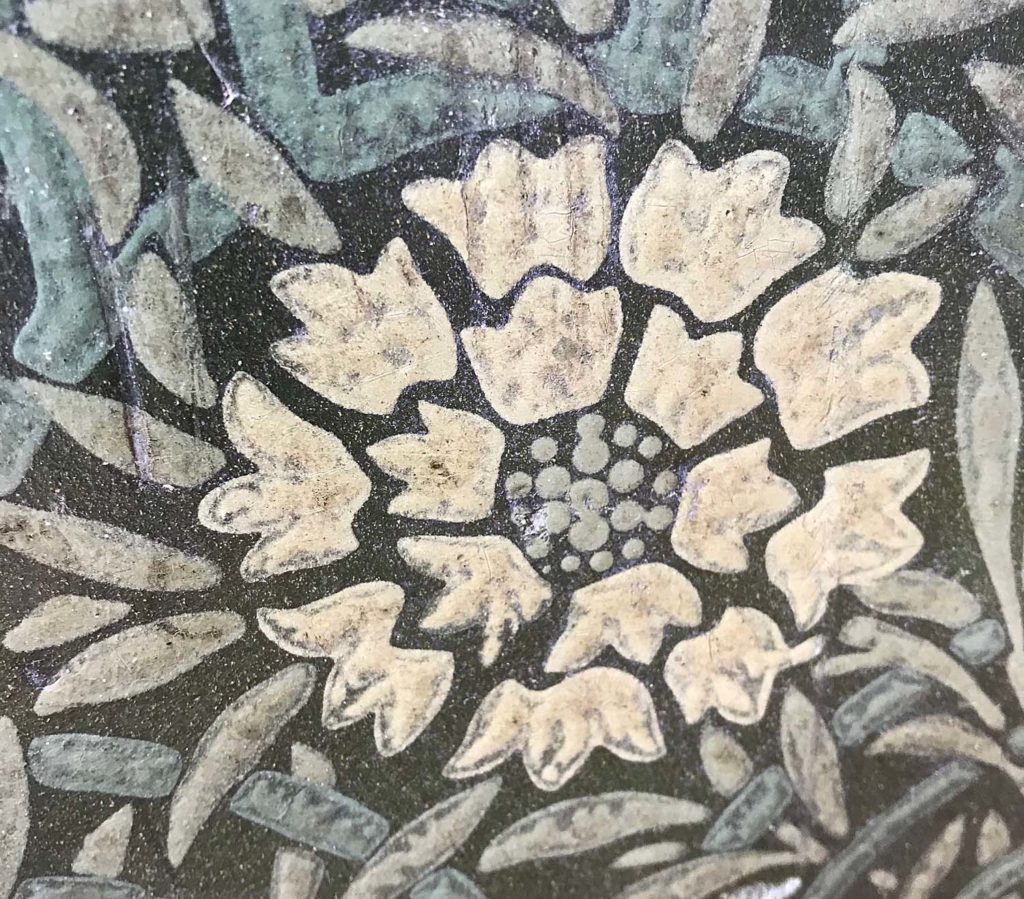 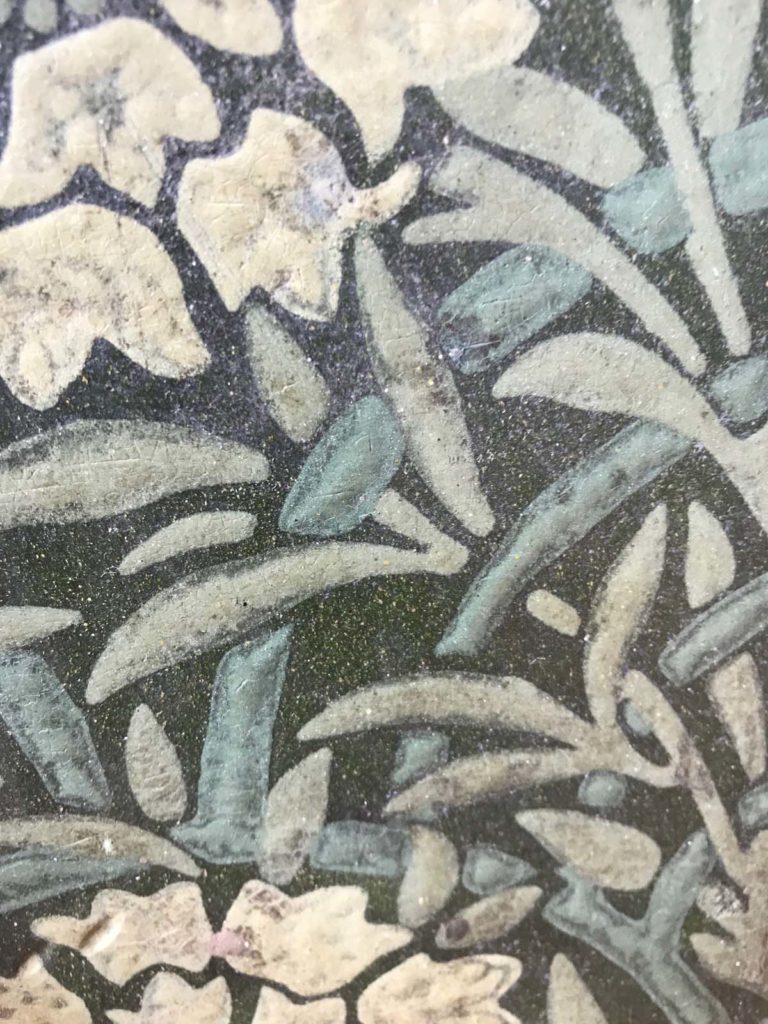 Despite its popularity Morris only made one design for lino – in two colourways. Nobody has ever seen the other version, only this green and yellow one, and because the Morris & Co catalogue is all in black and white we don’t know what the other colourway was. So if anybody ever sees a Morris lino in this design in another colourway it would be incredibly exciting.

Lino was a Victorian invention, it’s composed of linseed oil with a canvas backing and it soon became a very popular floor covering for many Victorians as it was a lot more affordable than the carpets Morris was producing.

“Many people are surprised that William Morris designed lino”

You could buy machine carpets but Morris also created hand woven Hammersmith carpets, which were hand-knotted by the women of the company on big looms in the room here at Kelmscott House. Some of these Hammersmith carpets have survived in good condition, largely because people used to hang them on the walls instead of walking on them, to not wear them out.

Many people are surprised that Morris designed lino, partly because you just don’t see it anywhere, it’s really rare. Morris & Co didn’t actually create and manufacture the lino themselves; they did as much as they possibly could in-house, like the dyeing and block-printing of the fabrics, but some things like wallpaper printing, and the manufacturing of lino, they outsourced. 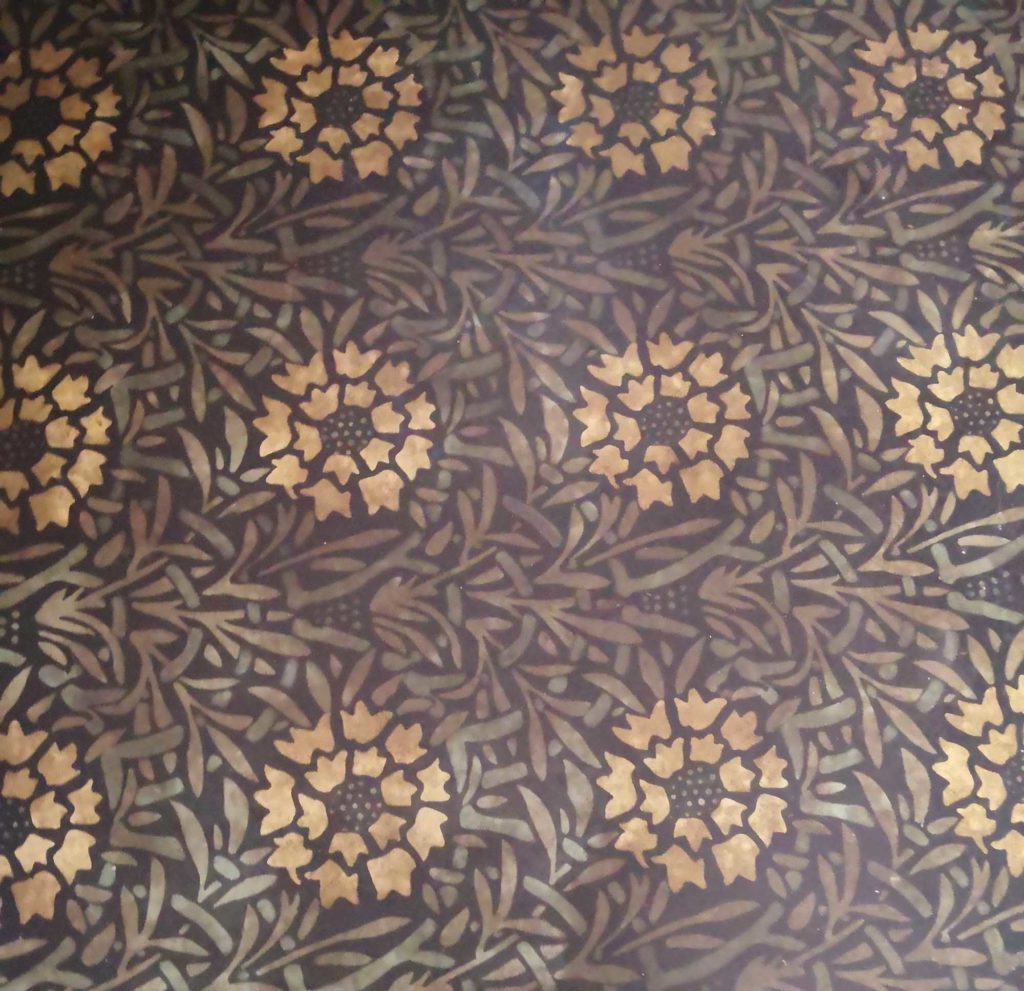 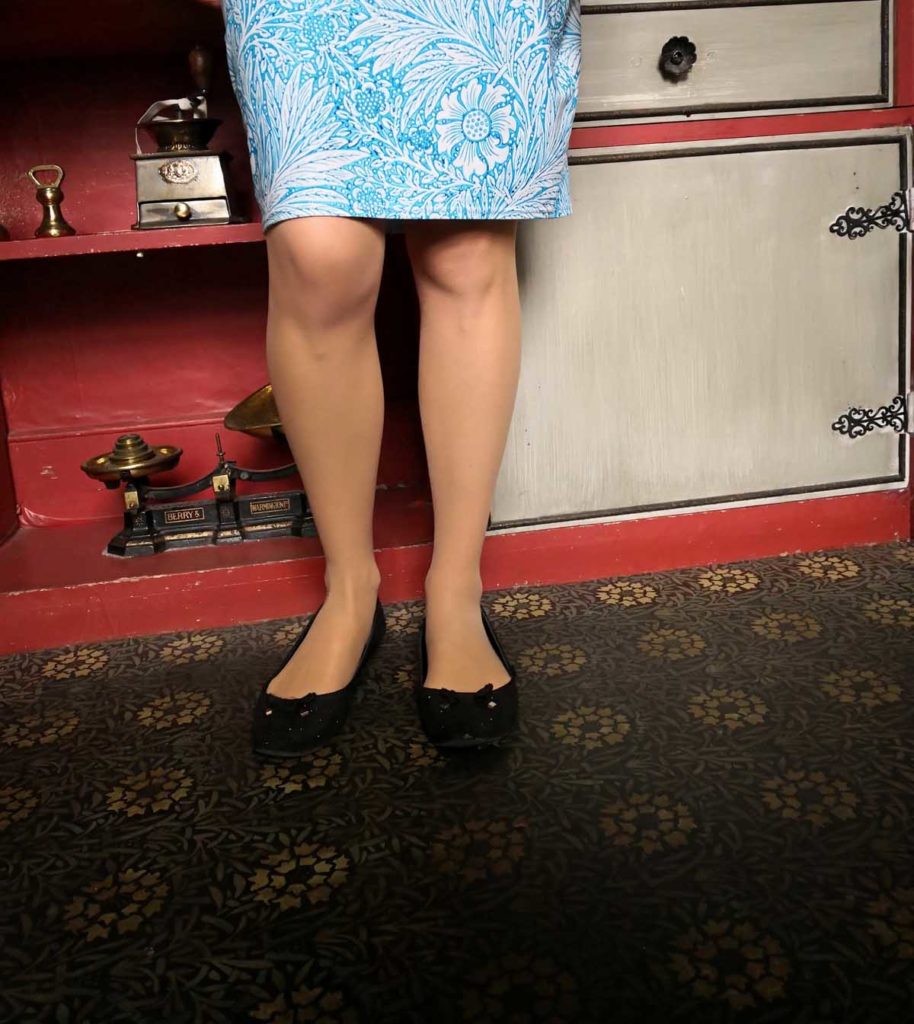 In the kitchen at Emery Walker’s House. Photo Lucinda MacPherson.

We think that this was created in Kirkcaldy because that was the lino capital back then, but unfortunately there are no records surviving of the companies now.

We’ve had this example in the collection for many years now, and to be honest it’s completely dried out and gone hard and brittle. But then a few years ago somebody was clearing out her house, she had a skip outside and was ripping up the Morris lino in the kitchen and she rang up and asked if we wanted some more examples.

So we actually now have some more examples of Morris lino which is still flexible! It’s been looked after, oiled regularly and kept in in a stable condition because we don’t want it to dry out. We’ve been trying to find a conservator to advise us on the storage and proper treatment of it, but there isn’t such a thing as a lino conservator.

Because it’s got a kind of canvas backing we’ve tried oil painting conservators, textiles conservators, and nobody seems to have dealt with it so it’s quite an interesting query we’ve got there. 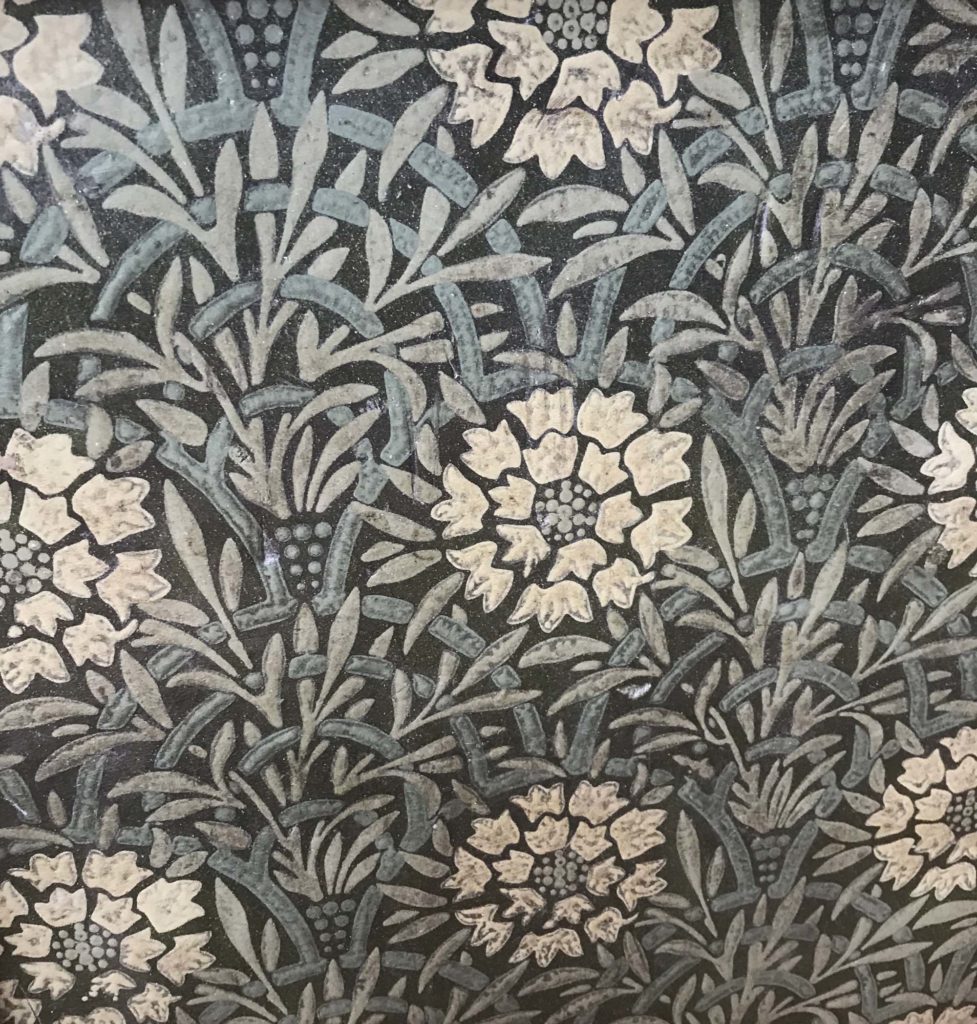 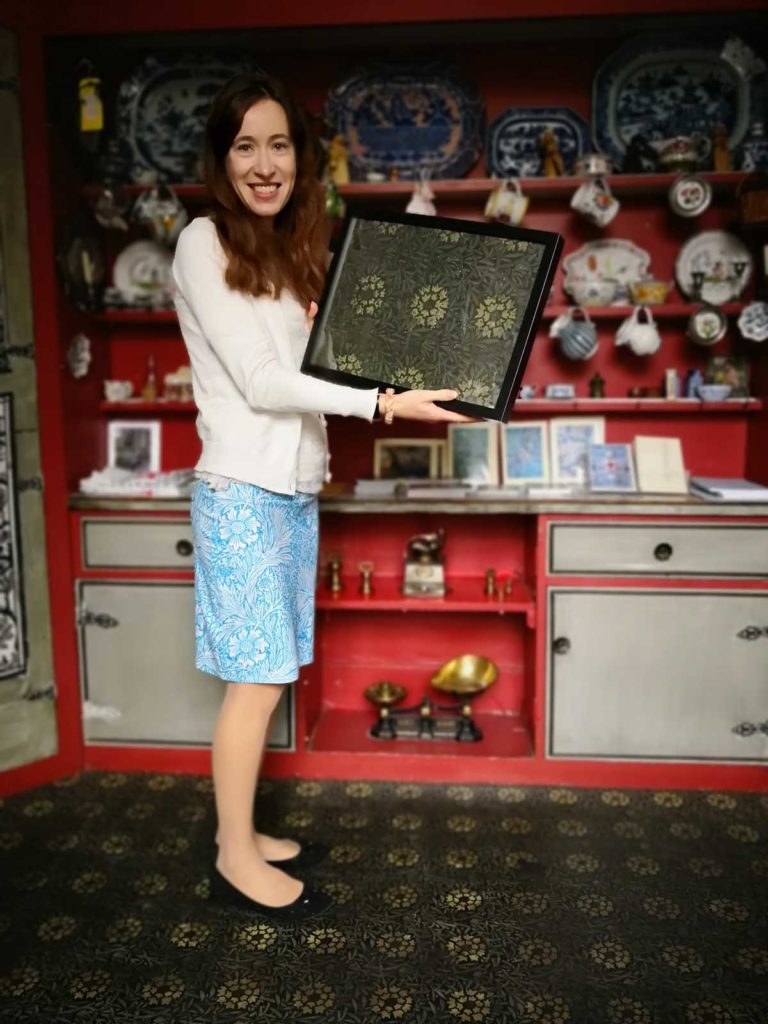 Kelmscott House was William Morris's home from 1878-96 and is close to the premises of his Kelmscott Press, founded in 1890.

One comment on “The last surviving scraps of William Morris and Co. Lino”