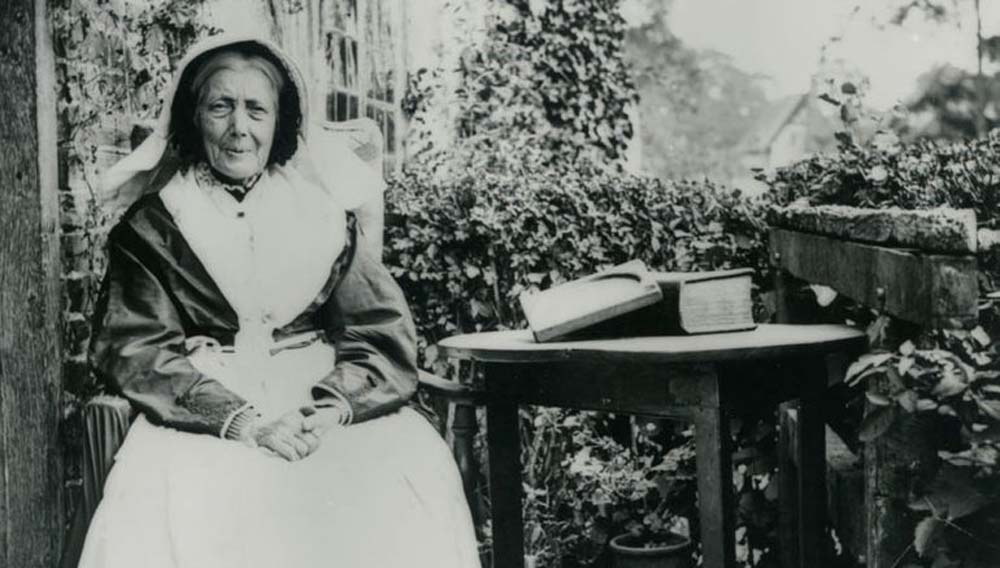 Before moving to my current role within the collections department of the Shakespeare Birthplace Trust, I was based for about five years at Anne Hathaway’s Cottage, the childhood home of William Shakespeare’s wife. It was certainly an enchanting place to work, and I often got comments from envious visitors telling me how lucky I was to be surrounded by such beauty every day.

Born in 1812, Mary Baker, or Mary Hathaway Baker as she sometimes called herself, lived in the cottage during the 19th century. She was a direct descendant of Anne Hathaway’s older brother Bartholomew. Bartholomew Hathaway took over the running of Hewlands Farm, as the cottage was then known, on the death of his father and the property was handed down the generations.

Unfortunately the Hathaways were forced to sell the cottage in 1838 due to financial difficulties, but they remained living there as tenants. In fact, when the Shakespeare Birthplace Trust bought the cottage in 1892, the Hathaways still stayed on as tenants and acted as custodians on behalf of the Trust. It wasn’t until 1911, almost 400 years and 13 generations later, that the Hathaways finally left the cottage, although many descendants still live in the local area today. 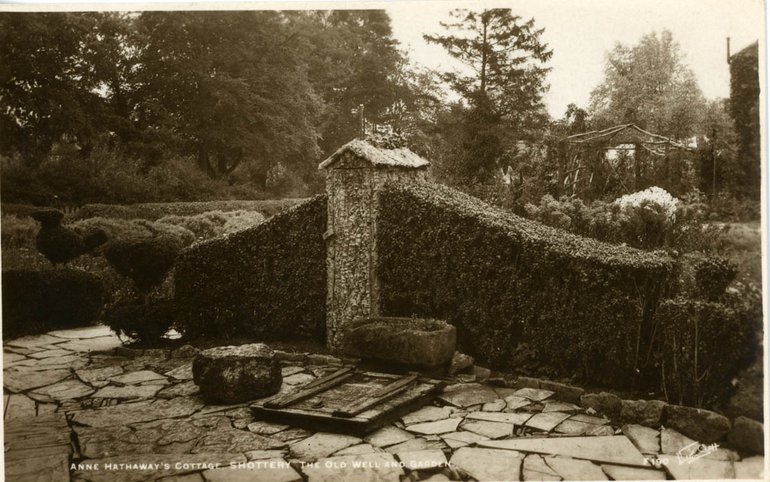 The earliest account of tourists visiting the cottage dates from 1742 when the famous Shakespearean actor David Garrick visited along with his brother George and fellow actors Charles Macklin and Denis Delane. After Garrick’s 1769 Stratford Jubilee, a festival to celebrate Stratford and all things Shakespeare, the cottage started to gather more interest from Shakespeare tourists. However, it wasn’t until Mary that the house became a properly established tourist attraction which received visitors from all around the globe.

A visit to the cottage in Mary’s time would cost just sixpence, and for that you could be expected to receive Mary’s undivided attention and a personal guided tour from a true descendant of the Hathaway family.

She would offer visitors tea while she showed them her family heirlooms, some dating back to Shakespeare’s time. Guests looking to derive inspiration were given the opportunity to drink from the old well, as Shakespeare would have done, and were sent away with a small selection of flowers from Mary’s own cottage garden.

Visitors to the cottage were particularly interested to hear about the romantic courtship of Anne Hathaway by Shakespeare. Mary would not disappoint them and would use a fair bit of artistic licence to conjure up images of the young lovers. Mary had an old wooden settle in her parlour next to the fireplace; the so-called ‘courting settle’.

She claimed that Shakespeare and Anne would sit together on the bench when they were courting and he would whisper sweet-nothings in her ear. Visitors were encouraged to sit together on the courting settle and recreate the romantic scene. Any tourist hoping to leave with a souvenir would not be disappointed. Mary offered visitors small slices of the settle that she would cut away with a knife, for a further sixpence of course.

Mary received tourists from all over the world and she made sure that every single one signed her visitor books. These visitor books are cared for by the Shakespeare Birthplace Trust and make for fascinating reading. It’s incredible to discover that people were travelling to England from as far away as Australia in a time when the journey by ship would take well over a month.

The visitor books even reveal that Mary received a lot of famous visitors in her time. They hold within their pages the signatures of many notable people such as literary figures Charles Dickens and Mark Twain, American presidents Ulysses S. Grant and James Garfield, artist Dante Gabriel Rossetti and his muse Lizzie Siddal, and even the Queen of Hawaii.

But what was Mary actually like? Luckily for us, Mary was such an integral part of a visit to Anne Hathaway’s Cottage that many first-hand narratives of encounters with her survive. She was referenced multiple times in newspapers, magazines and travel guides of the time and these writings give us valuable insights into what Mary was like from people who actually met her… a historian’s dream! 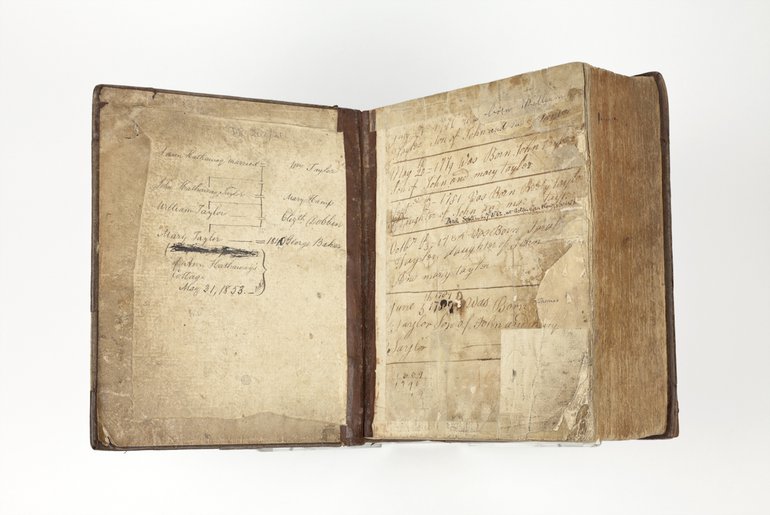 The Hathaway family bible with the family tree recorded inside. Finding number DR202/21

Mary was described as chatty, cheery and cordial. One rather lovely account from 1892 can be found in All the Year Round, a weekly literary magazine that was founded by Charles Dickens with various other contributors:

‘Mounting the little flight of irregular stone steps, we knock at the oak door with its long hinges of rusty ironwork, and entering the flagged passage, are ushered into the chief living-room by the venerable custodian, Mrs Baker, a pleasant dame of eighty years, with kindly face, and low, clear voice, and deliberate utterance.’

In this account Mary brings out an old tinder box and shows the author how it was used. She gets out the old family bible which has the family tree drawn out inside. She explains how the Tudors used trenchers (wooden plates) and board tables, and finally she shows the writer her visitor books, containing the signatures of Henry Wadsworth Longfellow and Alfred Lord Tennyson among others.

Another account from 1885 reveals to us how the growth of Stratford’s tourist industry affected Mary’s tours at the cottage. She remarked to one journalist how she ‘used to make a cup of tea for her visitors, yet now there are so many, and she an old body, she couldn’t be bothered wi’ it.’

The journalist, persuaded by Mary’s no-nonsense attitude, found himself obediently ‘taking this hint that the audience was over, and with it a Michaelmas daisy she pressed upon me, I stepped out again into the quiet lane and said good-by to the hamlet.’ (A Summer Day at Stratford-on-Avon, Popular Monthly, E Poingdestre, 1885). 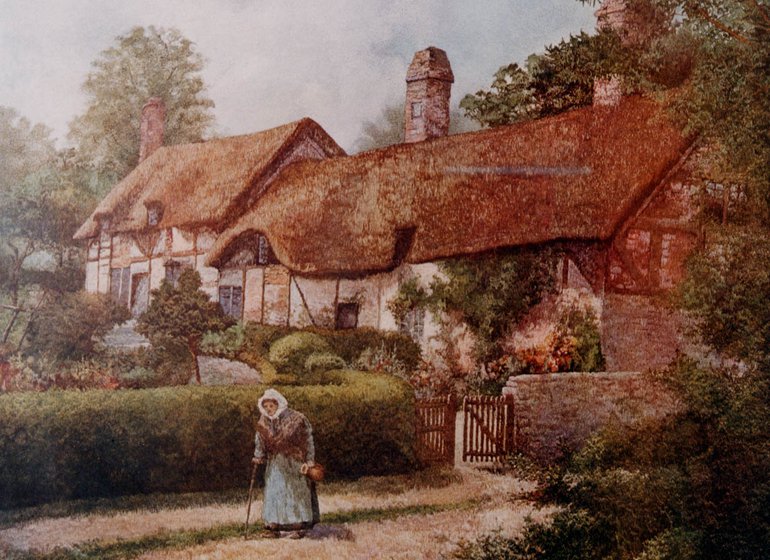 It’s fair to say that Mary and the cottage came as a pair. Photographers and painters hoping to capture the beauty of the cottage often asked Mary to model for them standing at the door of her home or sitting within the parlour.

Copies of these photographs can be found on display in the cottage today, meaning that modern day visitors can still, in a way, look into the eyes of the cottage’s first official tour guide. (These photographs can also be explored on our online catalogue at collection.shakespeare.org.uk). One thought I’ve often had, as well as many of our visitors, is whether or not the features in the faces of Mary and her family are shared with those of her famous ancestor. Although it is pleasant to imagine, we unfortunately will never know.

After 70 years of leading tours of her ancestral home, Mary died in 1899 after slipping on one of the stone steps in the cottage. Her death was felt across the Stratford community, and was even reported on in some national newspapers. One report from the Stratford-Upon-Avon Herald read:

‘In the minds of most visitors, Mrs. Baker’s personality was indissolubly associated with the cottage. She was posed in it by photographers, painted in it by artists, snap-shotted in it by amateurs, described in it by writers, seen in it by everyone. There can hardly be a town in the kingdom where hearts will not be touched by the news of her sad end.’ 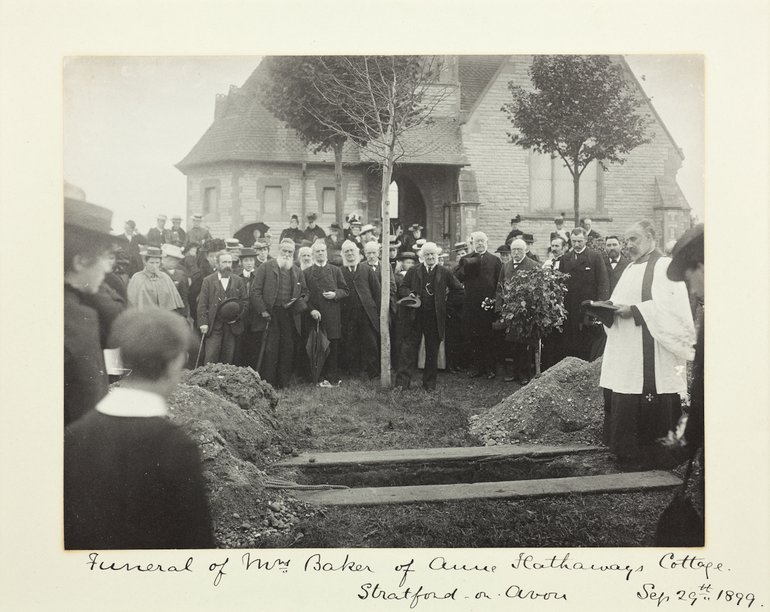 Her funeral was heavily attended, not only by her circle of family and friends, but by many local dignitaries and residents of Stratford.

Modern day visitors to the cottage are always fascinated to learn about Mary. I imagine she would be surprised to learn that she has become part of the attraction herself! I was often asked if I was in any way related to her or the family. ‘Not as far as I know’ I would disappointingly reveal.

That was part of the attraction of Mary: not only was she an attentive and captivating guide, but she provided a tangible and authentic link to Shakespeare. Never arrogant about her lineage, she created an emotional connection to Shakespeare, not only through the romantic rituals she encouraged her visitors to perform, but also from simply being in her presence. 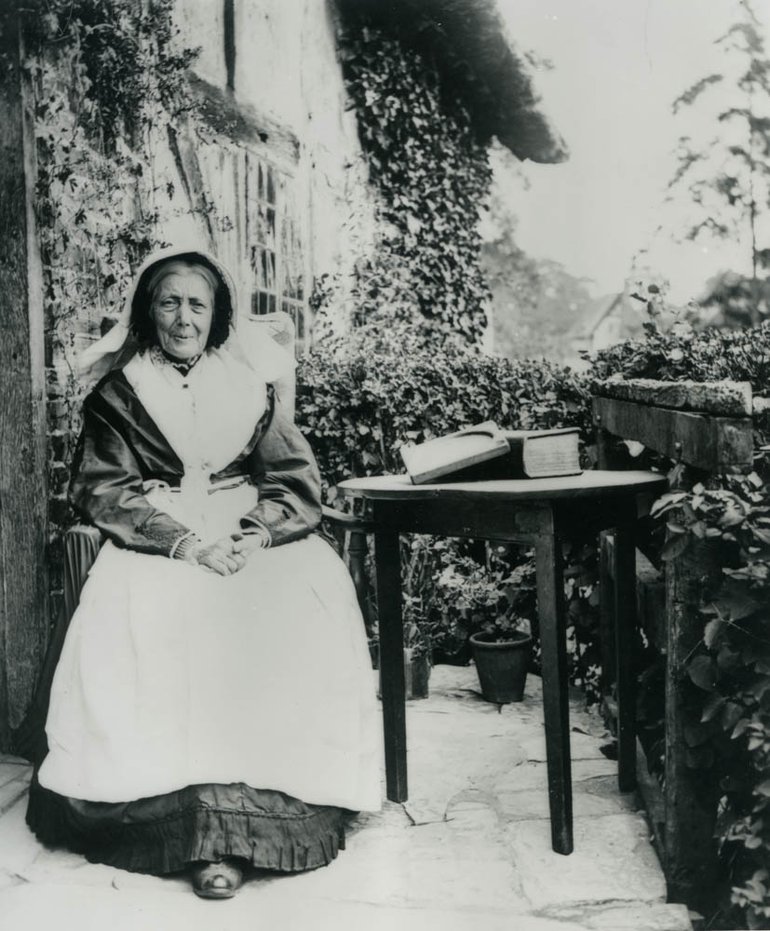 Her transformative powers left an immovable impression on the cottage. Before Mary the cottage was difficult to find, rarely visited. She turned it into a shrine to romance, a reputation that it still holds today.

The legacy of Mary still lives on at the cottage. Her presence can be felt most in her parlour, which is virtually untouched from her time. Plenty of the family furniture, such as the Hathaway bed and courting settle, still resides in the cottage. Mary shrewdly sold these items to the Shakespeare Birthplace Trust when they purchased the cottage in 1892. Even the well is still visible outside in the garden having recently been uncovered. 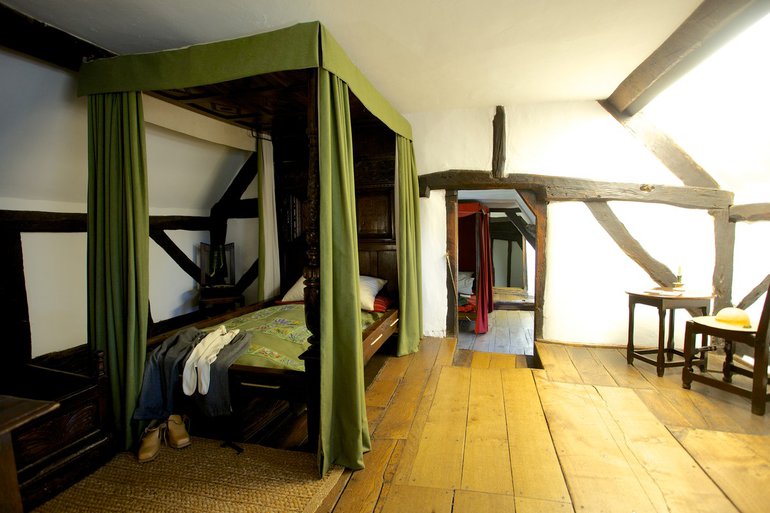 No matter where my career takes me I will always look back fondly at my time at Anne Hathaway’s Cottage. It was a privilege and an honour to step into Mary’s shoes and guide visitors around her fascinating ancestral home.

Anne Hathaway's Cottage is in Shottery, a hamlet within the parish of Stratford but just over a mile from the town centre. Today much of the land between the hamlet and town has been built over, but in Shakespeare's day they were two very distinct settlements, separated by open fields.…