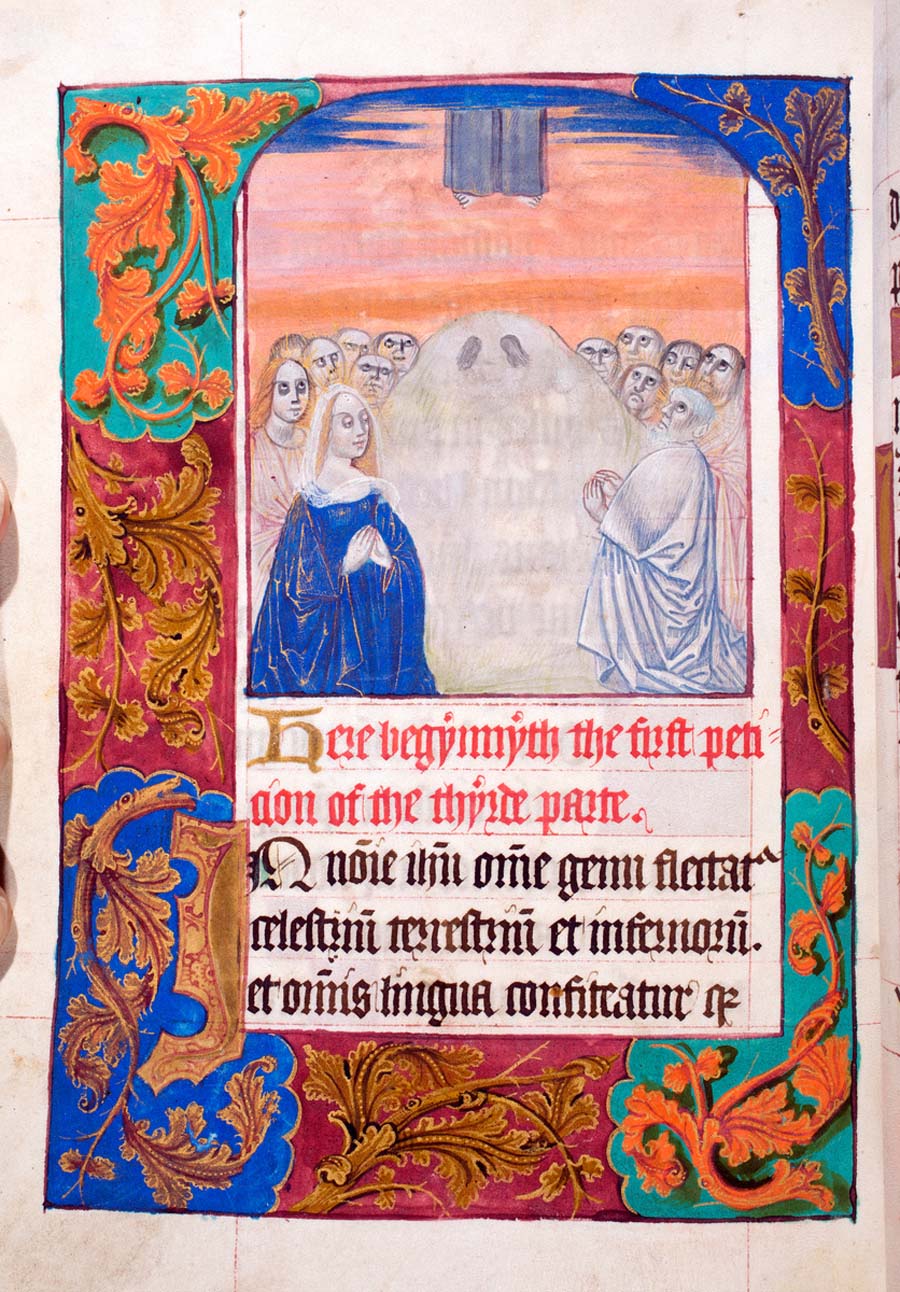 Matthew Payne, Keeper of Muniments at Westminster Abbey, on a fascinating illuminated personal prayer book that belonged to the grandmother of Henry VIII

An extremely pious and powerful figure, and a lynchpin of the House of Tudor, she was regularly referred to as the king’s mother and was closely involved in getting Henry VII – the first of the Tudor monarchs – on to the throne in 1485.

The volume may not have been made specifically for her. It may have been made for her fourth husband Sir Thomas Stanley who died in 1504 and presented it to her. His coat of arms is found painted in some of the initials.

As was usual, it’s covered in all the symbols you would expect – the coats of arms and heraldic badges; there are lots of Beaufort portcullisses, for example, which became a Tudor symbol and is now used by Parliament. 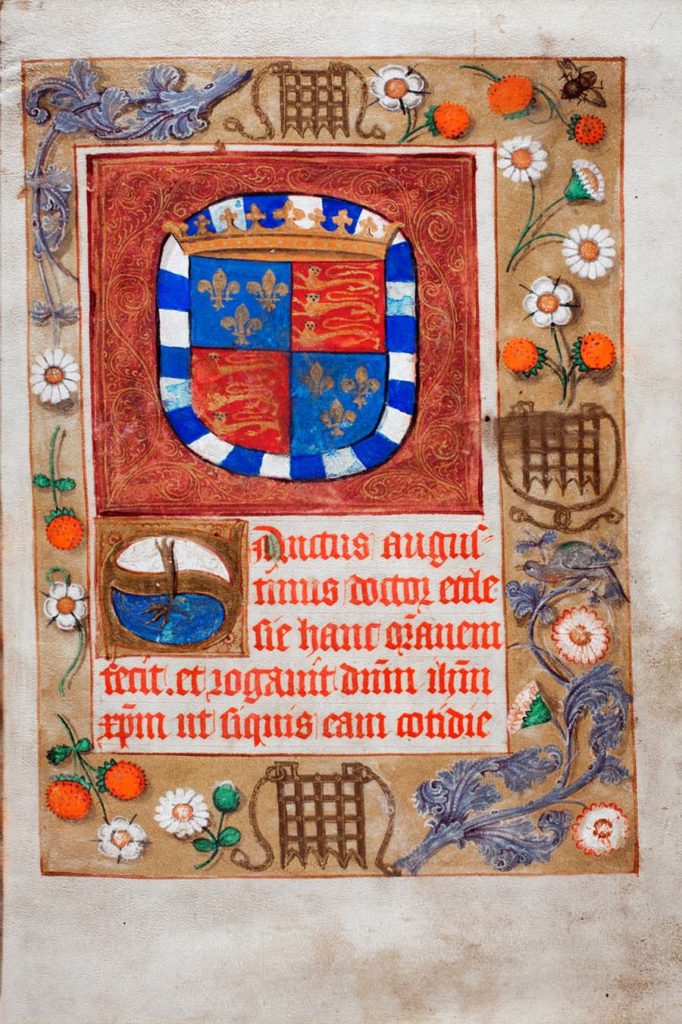 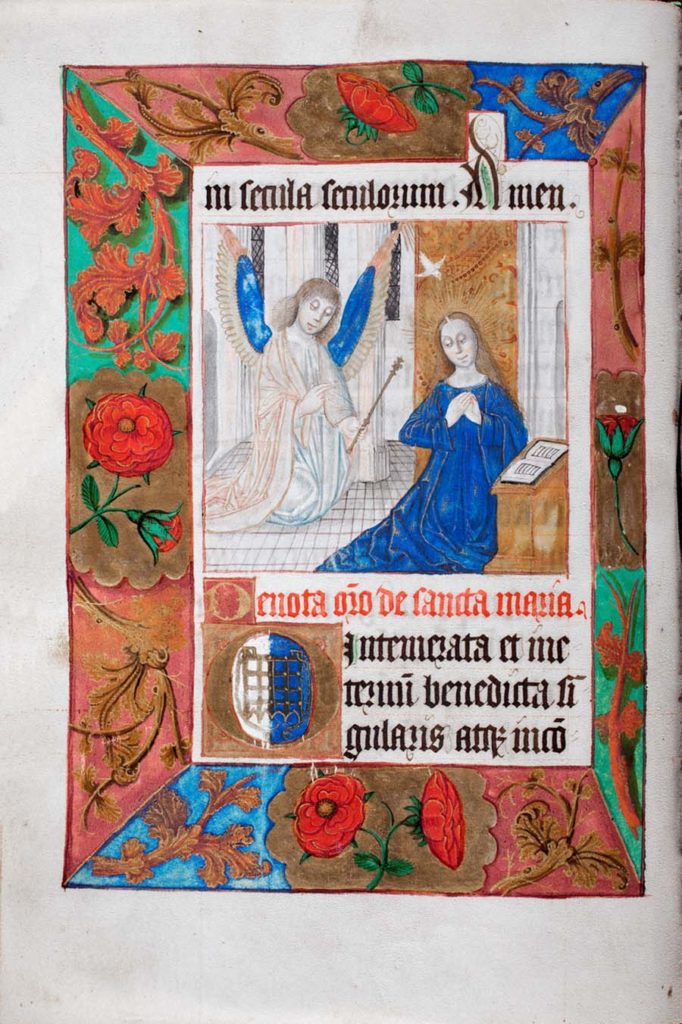 The book is evidence of that devotion and piousness that she displayed very strongly and it is very much a personal prayer book. It’s about ten inches high and was clearly for her to use and hold in her hand rather than a display object to put on a lectern. And it’s as simple as it claims to be – it’s a collection of prayers for her private use, focused on her personal favourite saints and the Virgin Mary that she might use at different times of the day and in different circumstances, presumably with her chaplain.

Like her son Lady Margaret Beaufort was something of a hypochondriac. She was terrified of the plague, so she was very keen to venerate saints that might protect her and her family from plague, pestilence and sweating sickness – diseases that were killing huge numbers of people in England at the time.

The book is a lovely little object, beautifully bound, and relatively typical of its age, although, as Lady Margaret and Sir Thomas were very wealthy, they could afford a pretty sumptuous example. If you were an average London merchant, for example, you would probably have had a much more primitive affair, probably little more than a commonplace book. Only the powerful and wealthy would have splashed out on a personal book like this.

Even so, it’s not the most lavish of prayer books as you can see from the illustrations, which are somewhat naïve. The Holy Ghost is a rather cartoonish character, so iconographically it’s very interesting. If you look at some comparisons of a similar sort of date that Dutch and Flemish artists were producing, there are some incredibly sophisticated and beautiful things. This isn’t perhaps one of quite that quality. 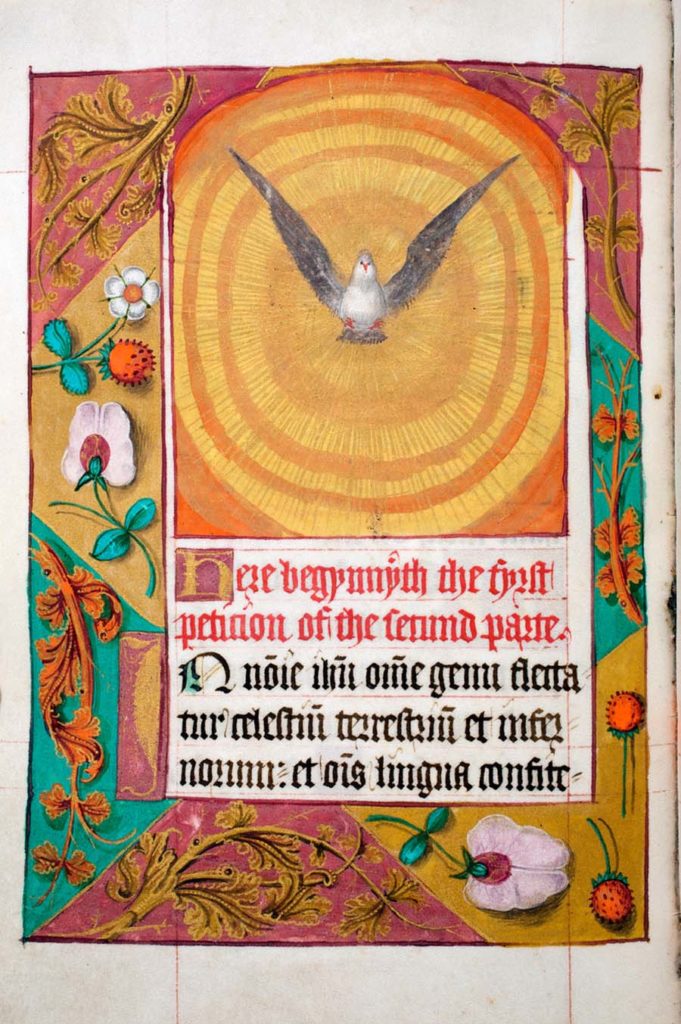 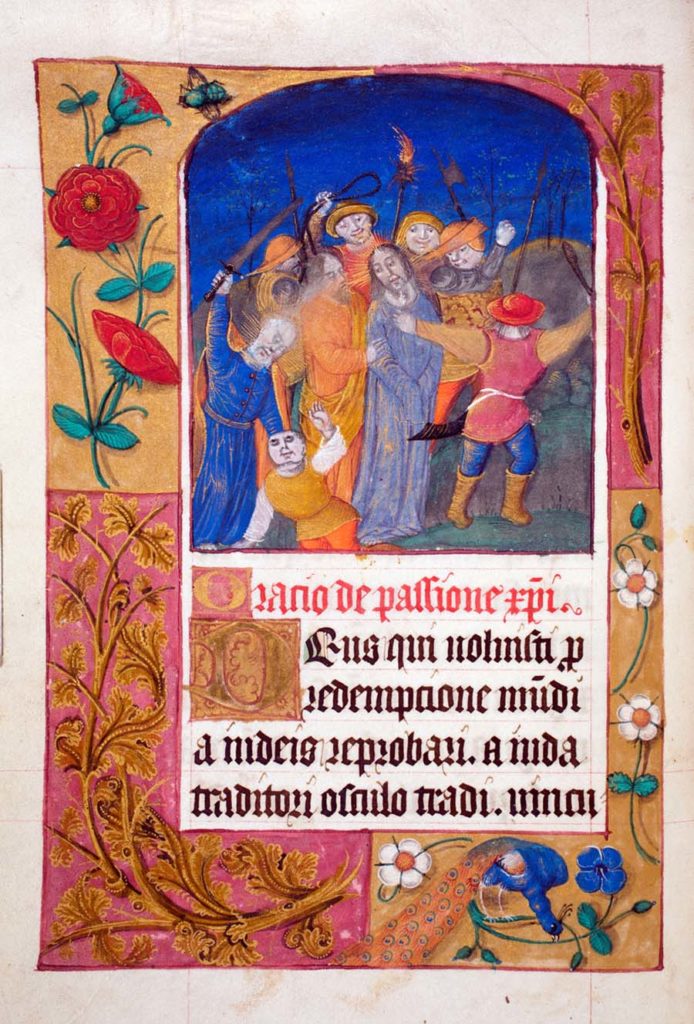 Lady Margaret was a learned woman of the times, in the sense that she was very supportive of scholarship (she founded Cambridge colleges and professorships), but she seems to have had a limited grasp of Latin. She would read prayers rather than necessarily understanding the intricacies. There is evidence that she read mainly in English so some of the prayers in the book are in English and some are in Latin.

This was not uncommon; Latin in an erudite form was largely the preserve the clergy and scholars; she preferred to read in English and so had to have some books translated for her. There’s a record in her accounts for a payment for a translation of Virgil, suggesting that she couldn’t read the Latin but wanted to read this important work, which is quite enlightened for someone in the first years of the 1500s. But as a lay book, one not being used by the clergy, it was perfectly common to have a mixture of both languages.

So I think the prayers in English are likely to be the ones she would have been most attached to, but her piousness meant the Latin, as the language of the church, was very important and her chaplain would doubtless have steered her through them.

It’s interesting that saints feature pretty heavily – saints that would not have survived the 1540s and 1550s when their cults were destroyed as being popish and blasphemous. After that point, whoever owned this manuscript was either secretly catholic or historically interested in it as an important object. Many surviving examples are defaced in some way, often the mentions of Thomas Beckett and various other saints are crossed out, for example.

At this date, the Abbey would have had masses and masses of grander and more formulaic liturgical books, but they were pretty much all destroyed during the Reformation. We don’t have any of them anymore. Those that did survive were probably taken for private collections, and have now ended up in libraries such as the British Library and the Bodleian. In the 16th century the Abbey was ransacked of almost all of its books. 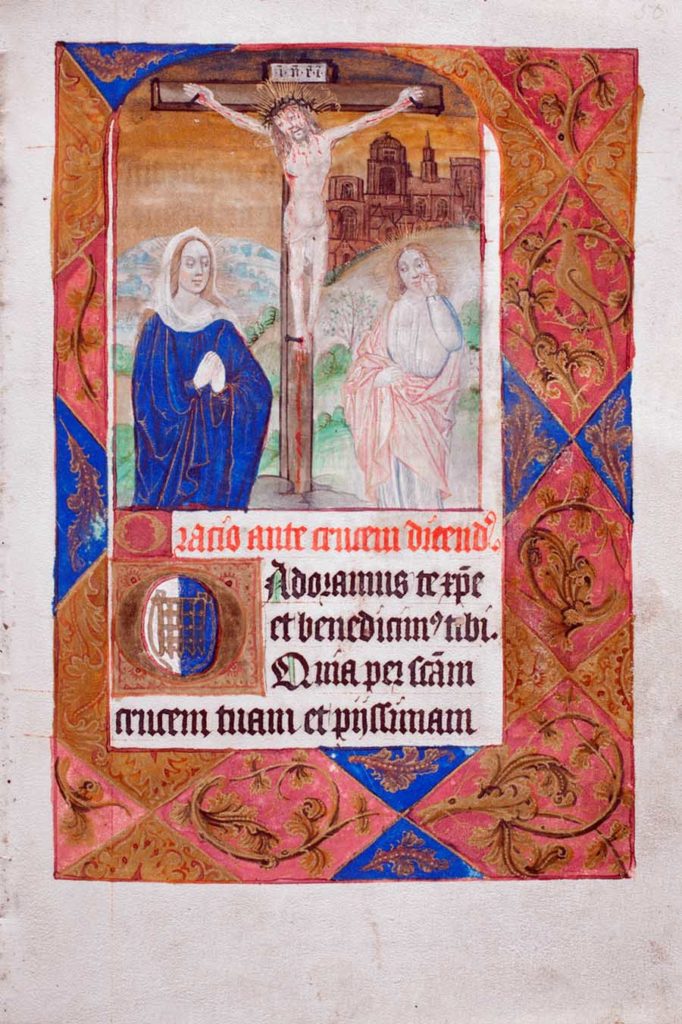 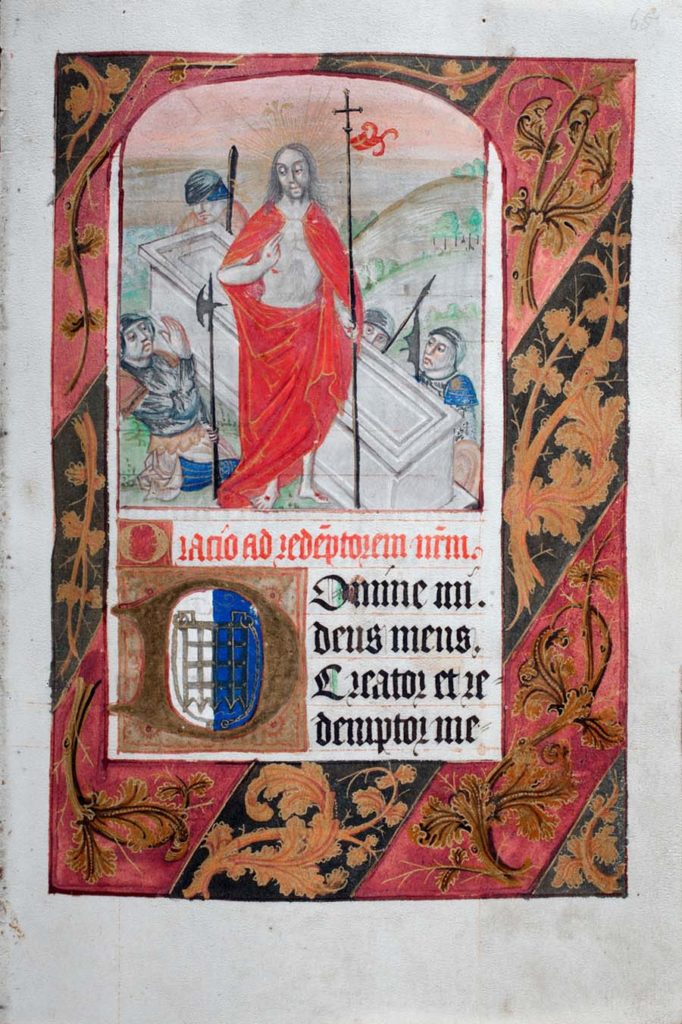 Lady Margaret Beaufort prayer book. MS. 39. By kind permission of the Dean and Chapter of Westminster.

I’m sure many such books and manuscripts would have been disposed of under Edward VI, but for some their Royal associations probably protected them more than if they were sitting in the library of a nobleman in Wiltshire, nervously looking over his shoulder.

The Royal Library, the contents of which were a foundation collection of the British Library, has several examples of them. There must have been a recognition that they were artistic objects of value – and if they had been Henry VIII’s that would certainly have helped them survive.

The connection with Lady Margaret Beaufort would have certainly helped preserve her prayer book. She was a major figure and of interest to historians of the day, so it’s not entirely surprising that someone hung on to it, although we don’t know very clearly its provenance thereafter, before it was presented to the Abbey in the 19th century.

“The Master of the Dark Eyes”

There is a note of an ownership in the seventeenth century, when apparently it was in the possession of a woman, so its association with Lady Margaret, it’s size, the fact it was a very personal object and the way it is decorated, may all have been factors in its survival.

Another difficulty with working with illuminated manuscripts like this is identifying the maker; you would expect that in the various accounts and papers somewhere there would be recorded the name of the person who was paid for making something like this, but it rarely occurs.

This artist is simply known as ‘the Master of the Dark Eyes’. It’s not entirely evident here as it is on some of the other examples of his work, but the artist had a style of darkening the eyes in the sockets. In fact, it may have been a little studio of artists doing this style of work, or it may have been just one person, but they or he have never been identified. He was likely Flemish, possibly from Bruges and he was probably based in London at the time, so we still live in hope of tracking him down.

200 years prior to this, prayer books of this kind would have been produced in monastic scriptoria, but by the date that this was produced there was a professional class of scribes who made them, and it took a whole cohort of people to put such books together. You needed a scribe to write the text; a limner to paint the illuminations and a binder to bind it up. It might all be made and bound within one studio or whoever commissioned it might receive the book unbound before sending it off to a binder themselves. 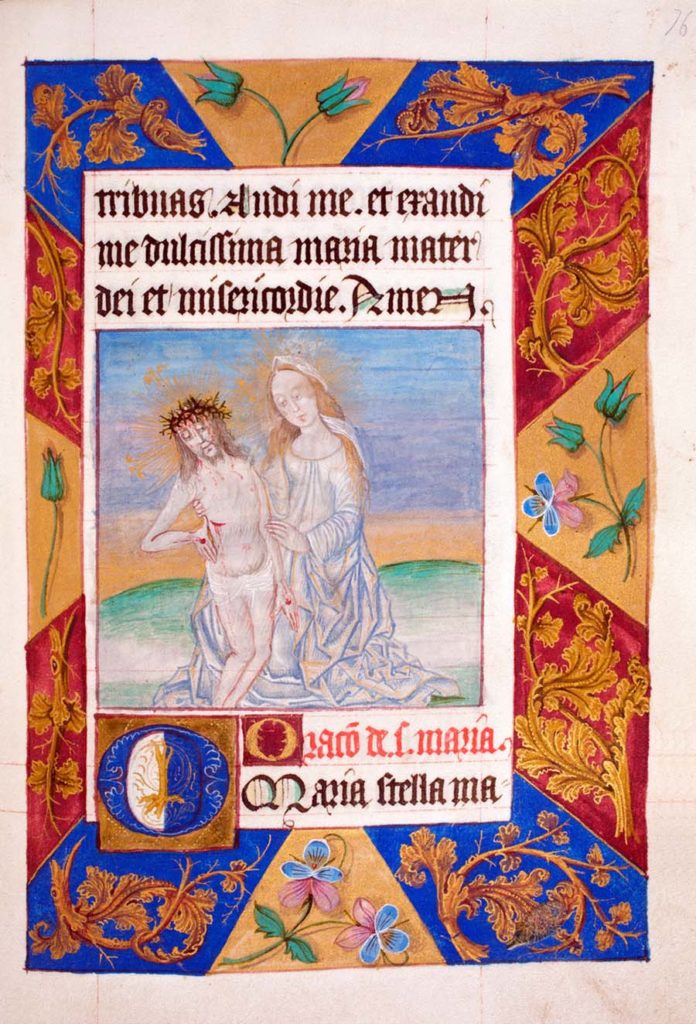 Lady Margaret Beaufort prayer book. MS. 39. By kind permission of the Dean and Chapter of Westminster. 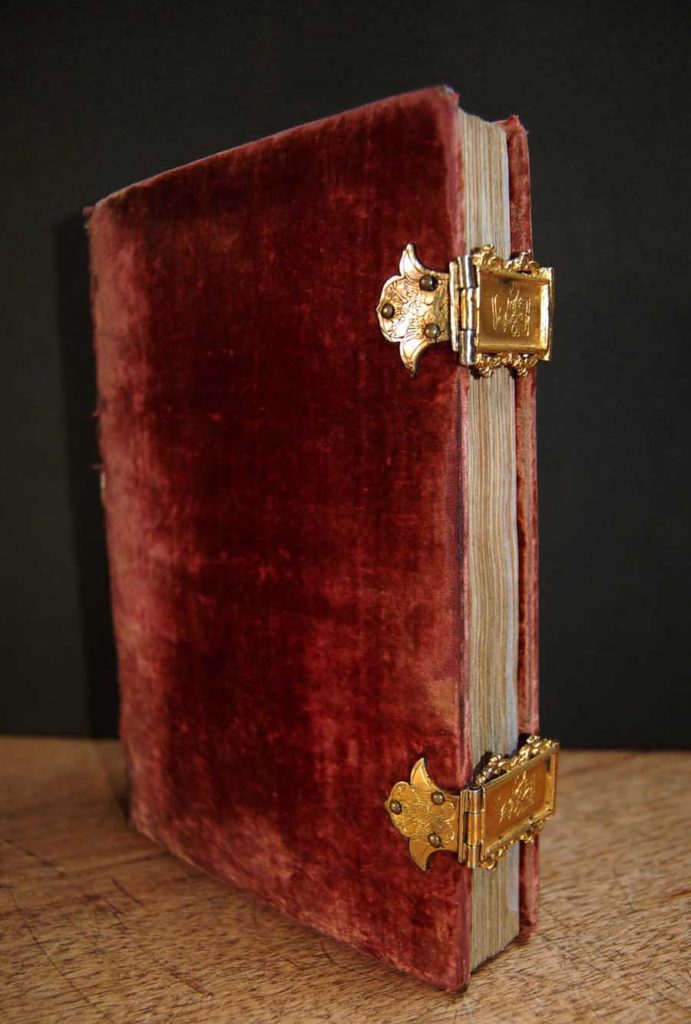 It was a whole little industry and there’s still more to be done to pin down where these people were operating, who they were, and what work they were doing. Archivally there’s not much information to go on as they didn’t record a lot of this. Did they come across the channel and do this work? Were they based in London? Did Lady Margaret order it through an agent? Or did they come to her house? Her coat of arms and the Stanley coat of arms are present in it, so it is clearly very specific to her.

From an Abbey point of view the prayer book is particularly important because Lady Margaret Beaufort died at the Abbey, for which she had a special attachment, and was buried there in the newly-built Lady Chapel. She had been staying in part of the Abbot’s house, Cheyneygates, having gone there for the funeral of her son Henry VII and to wait for the coronation of her grandson Henry VIII. She died five days after the coronation, and she may well have used this book in her private prayers while she was here.

It’s on display in the Queen’s Diamond Jubilee Galleries and will remain there. We turn the pages occasionally, so you get to see different illuminations.

2 comments on “The Master of the Dark Eyes: The prayer book of Henry VIII’s grandmother”