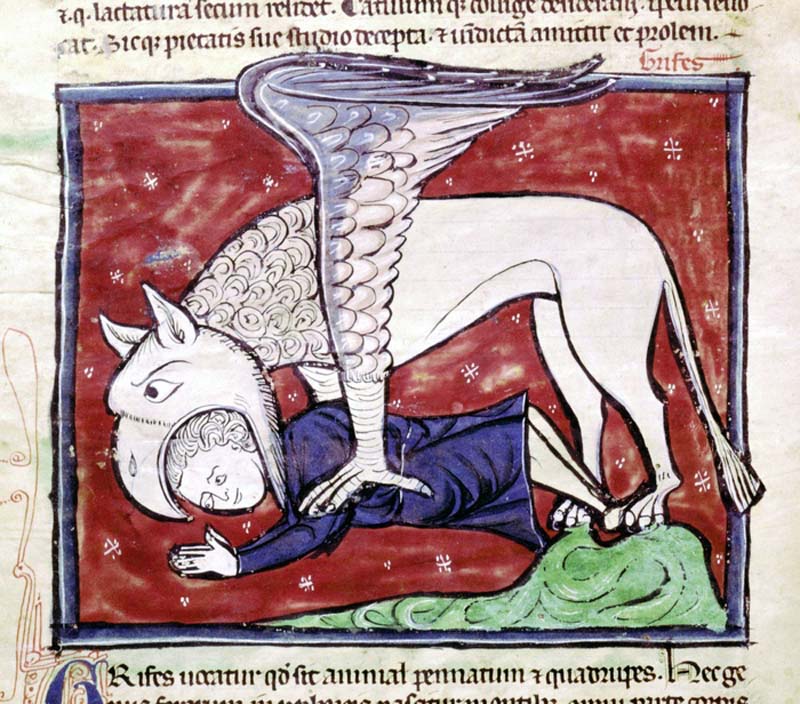 A dog that solves murders, a manticore with a lion’s body, human head and venomous tail, and Adam naming the animals – these are just some of the wonders you might find in a medieval bestiary.

Looking at Westminster Abbey’s gloriously bonkers version (dating to c. 1275-1290) of these colourful treasuries of godly and otherworldy instruction – it’s easy to see why they were popular in the Middle Ages.

Offering both devotional inspiration and literary enjoyment the Westminster Abbey bestiary is packed with the usual mixture of known species and exotic animals – including wild beasts, birds, fish, snakes and insects. But it is the mythical creatures including a triple-headed dog, a griffin devouring a man, a chimera and a rather fine dragon that grab the attention.

The text accompanying these mythical beasts, written in the customary Latin, is deeply religious and often uses the creatures as a means of moral guidance or as allegorical devices for Christian teaching. 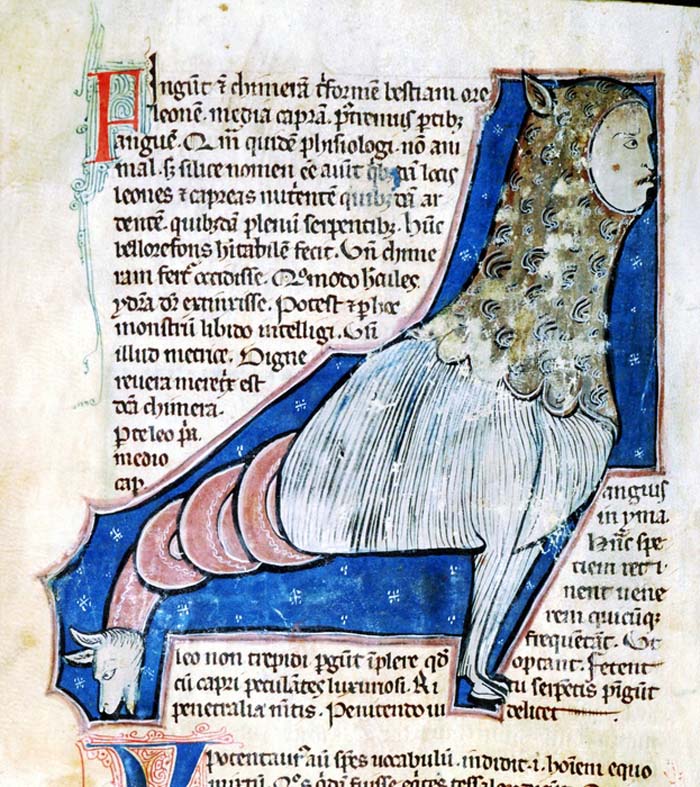 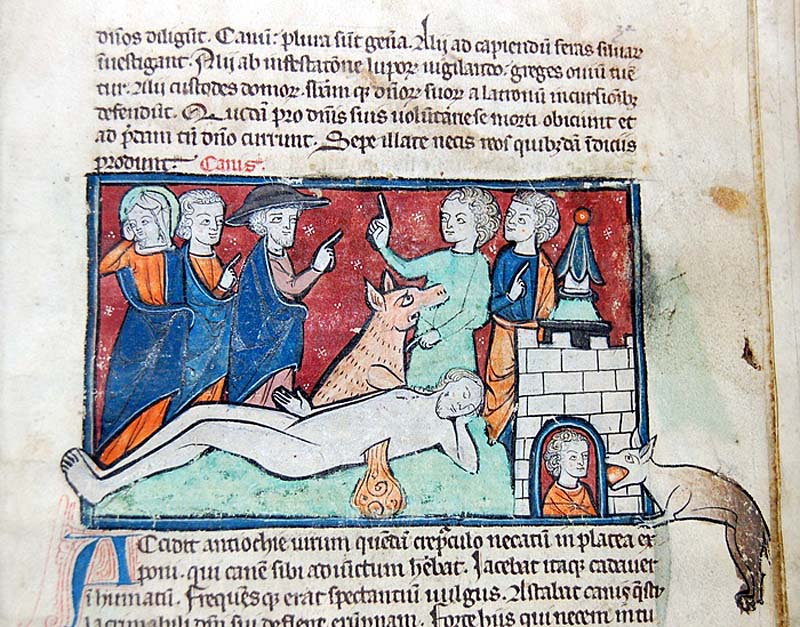 A dog detecting a murderer and bringing food to a prisoner. Westminster Abbey Library © Dean and Chapter of Westminster 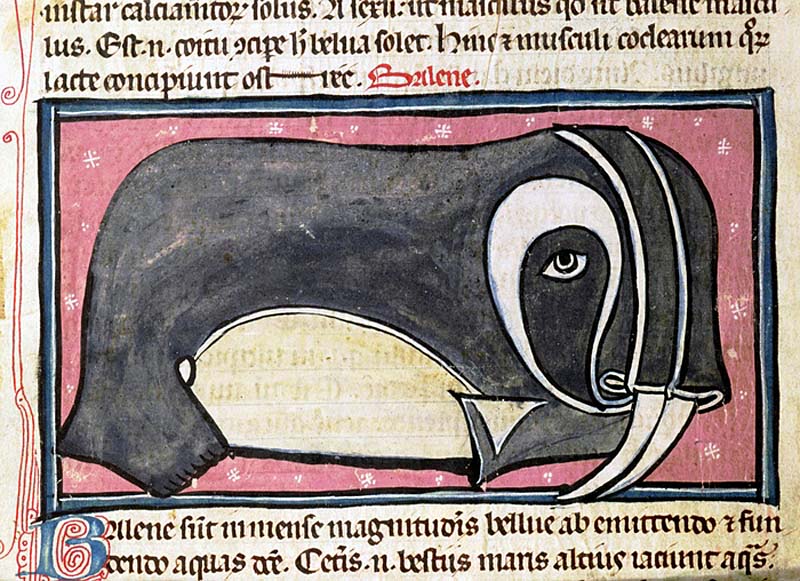 The Westminster Bestiary is thought to originate in York where the scribe clearly knew well the elements that secured the bestiary its reputation as one of the most engaging forms of medieval illuminated art. The book is currently on show at the Getty Museum in LA where 100 examples, representing around a third of the world’s surviving medieval bestiaries, are being displayed.

“The bestiary’s images can be seen as the medieval equivalent of contemporary memes,” says Elizabeth Morrison, senior curator of manuscripts at the Getty Museum. “They served as memorable and engaging snapshots of particular animals that went viral in medieval culture.

“The bestiary, in fact, still impacts how we talk about and characterize animals today. The very first line of the medieval bestiary introduces the lion as the king of beasts, an idea we take for granted even if most people don’t know its origin.”

However, another aim of the stories and illuminations was not to impart factual information or visual accuracy but rather to convey the wonder, variety, and hidden meaning found in the natural world.

One of the most common arrangements to be found in these medieval treasures are quadrupeds, birds, serpents and sea creatures. Then elephants, eagles, sirens, hippos and dragons – each accompanied by its own description and associated morality tale. Readers might be assailed by unicorns – or marooned on the back of vast whales masquerading as ocean islands in order to lure unwary fishermen into the watery depths. 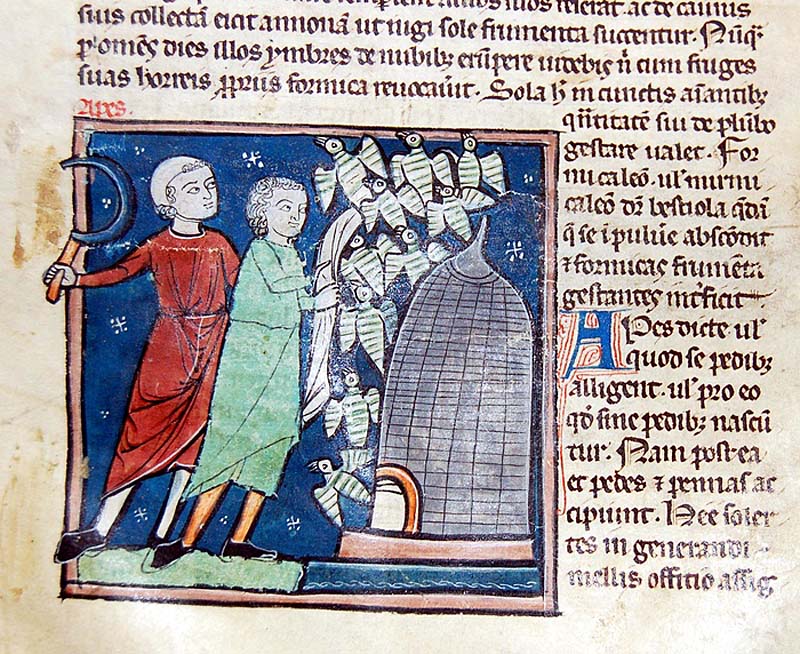 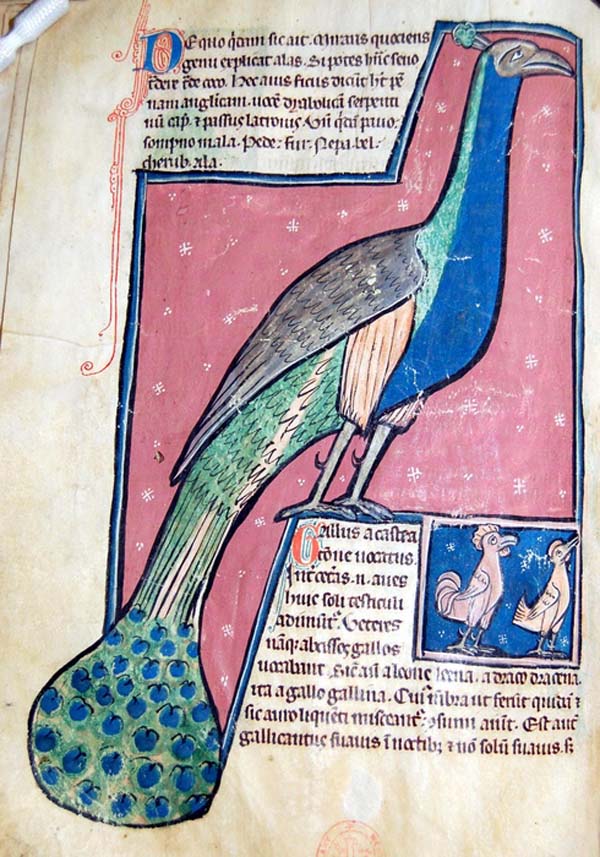 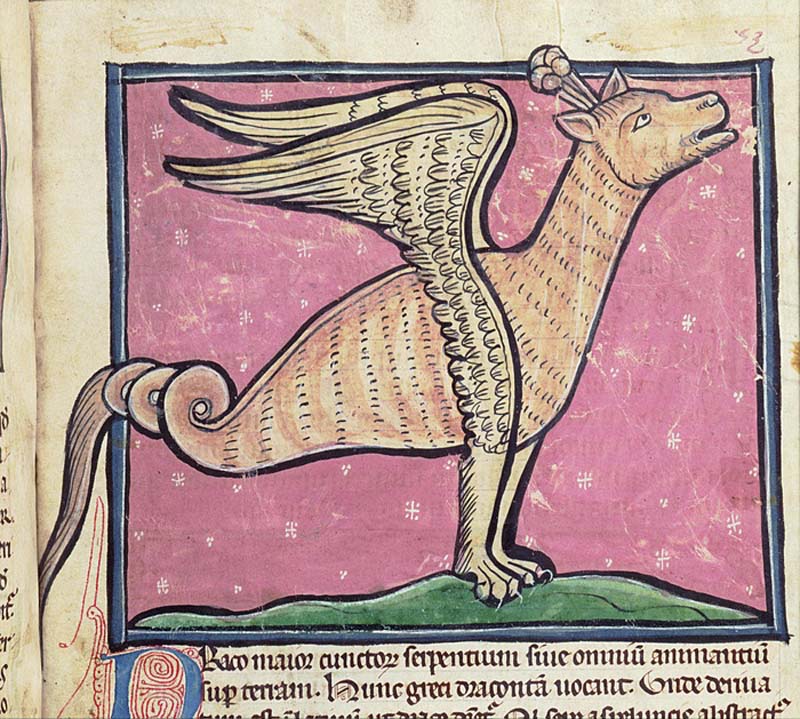 “Many of the illuminated manuscripts produced in the European Middle Ages centred around stories from the Christian Bible,” adds Timothy Potts, Getty Museum director. “Less well known, however, are the various genres of writing and illustration that celebrate and ornament aspects of worldly life and popular belief.

“Both for their artistic inventiveness and for the insights they provide into the fertile medieval imagination these works are one of the most engaging aspects of medieval art’.

Yet, even though the medieval bestiary was never intended as a scientific work, much of its lore was eventually incorporated into the nascent field of natural history and the period of the bestiary’s greatest popularity corresponded with a movement toward the creation of encyclopaedia intended to gather together all knowledge.

Many of these included a section devoted to animals, which relied heavily on the bestiary but often stripped away the Christian symbolism. At the same time, the European conception of the world was being broadened by a growth in trade and travel that increasingly linked the West with other parts of the globe. The stories popularized through the bestiary continued to influence natural history texts and images well into the sixteenth century.

The Westminster Bestiary is one of around 60 medieval manuscripts in the Abbey’s collection, which also holds the Liber Regalis (‘Royal book’) containing ceremonial instructions for the coronation service; and the Litlyngton Missal, a 14th-century service book made for the Abbey’s high altar. 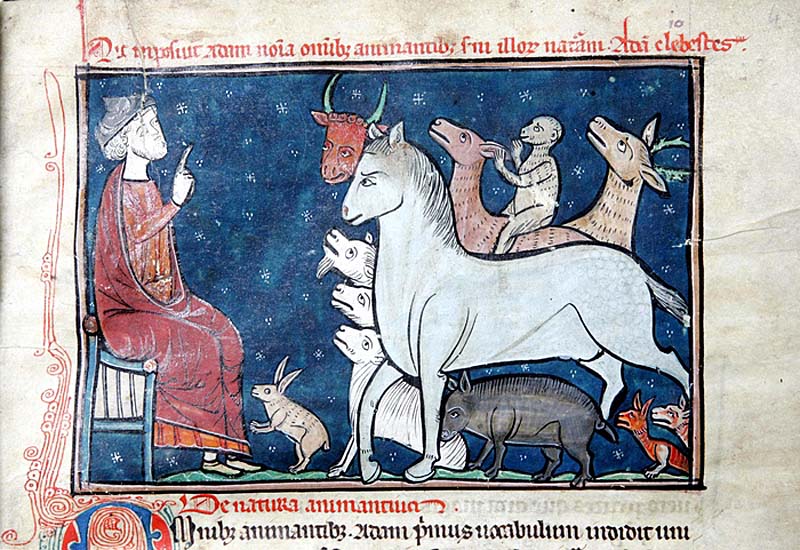 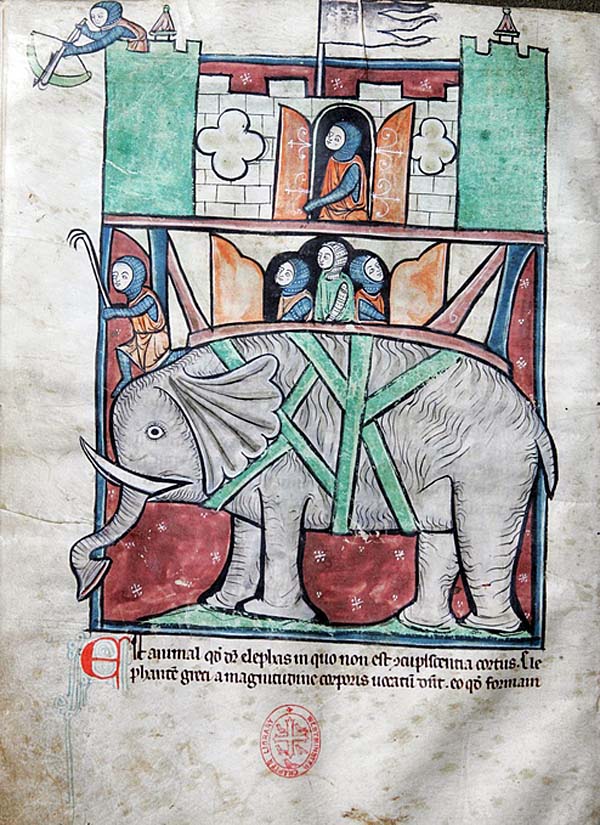 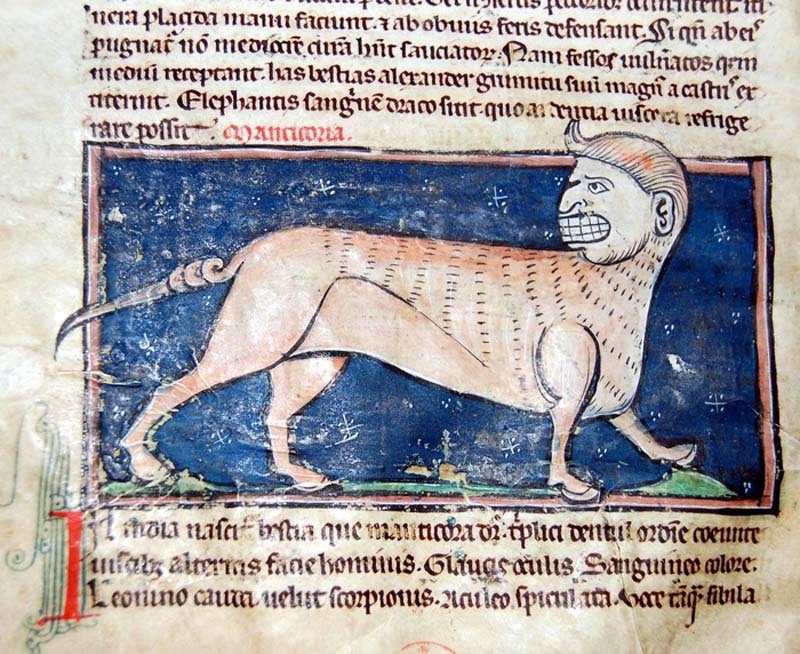 Manticore with a human head. Westminster Abbey Library. © Dean and Chapter of Westminster

Westminster Abbey itself boasts a history stretching back more than a thousand years with the shrine of Anglo-Saxon king and saint, Edward the Confessor, at the heart of the building. Since Edward’s death in January 1066, his successor monarchs have come to the church for their coronation, and seventeen of them lie buried within its walls.

Book of Beasts: The Bestiary in the Medieval World, runs at the J. Paul Getty Museum, Los Angeles, until August 18 2019.

One comment on “The medieval beasts of Westminster Abbey”