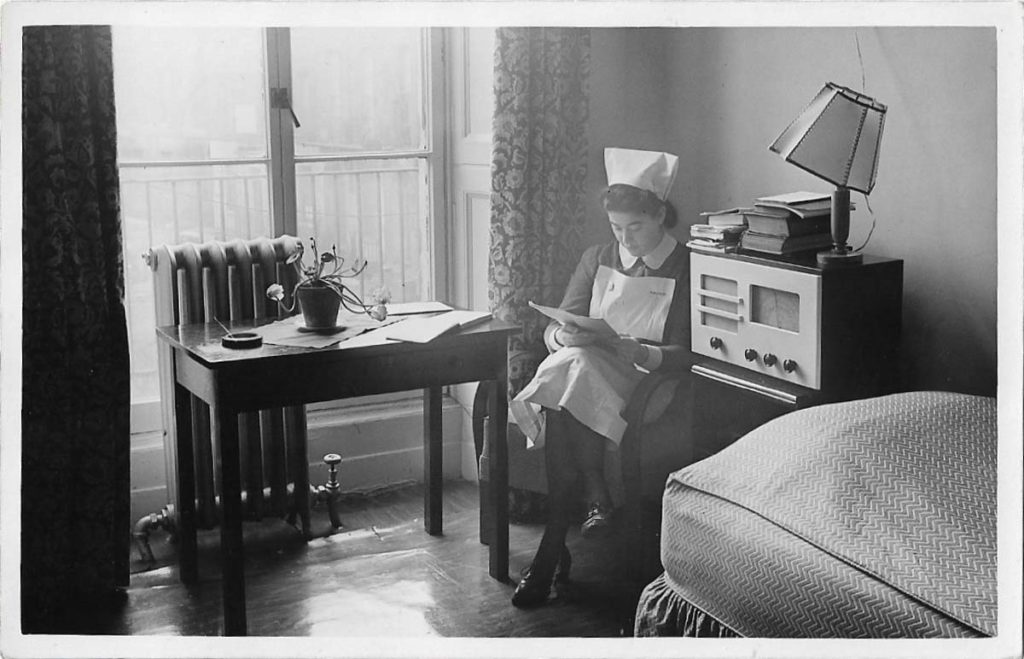 Heart of the Nation is a new multimedia exhibition that tells the story of migrants and the NHS through oral histories, archival materials, art and animations

The story of the migrants who have played a key role in the NHS ever since its creation in 1948 is not a new one. But it has largely been ignored.

Yet around a quarter of NHS staff are non-British nationals or from a minority ethnic background, rising to around a third of nurses and health visitors and almost half of doctors.

Many of them have found themselves working on the frontlines of the Covid-19 pandemic, which has highlighted not only the importance of the NHS in all of our lives but also its reliance on people from all over the world; a disproportionate number of whom have lost their lives.

And we often know very little about the personal stories of our care givers, or the individual and institutional challenges they face, which is why the Migration Museum has launched this online exhibition to shine a light on the stories and experiences of people who have come to Britain to work in the National Health Service over the past 72 years.

The Museum explores how the movement of people to and from Britain across the ages has shaped who we are – as individuals and as communities. Their intention is to eventually open a physical museum with a collection, but for now people can visit their displays in their pop up exhibition space in the Lewisham Shopping Centre, and explore their exhibitions online – like this latest NHS focused project.

Highlights include dozens of stories contributed by people who have come from all over the world to work at all levels of the NHS from the 1940s to the present day. There are also opportunities for people to submit their stories – to be added to the exhibition on an ongoing basis. 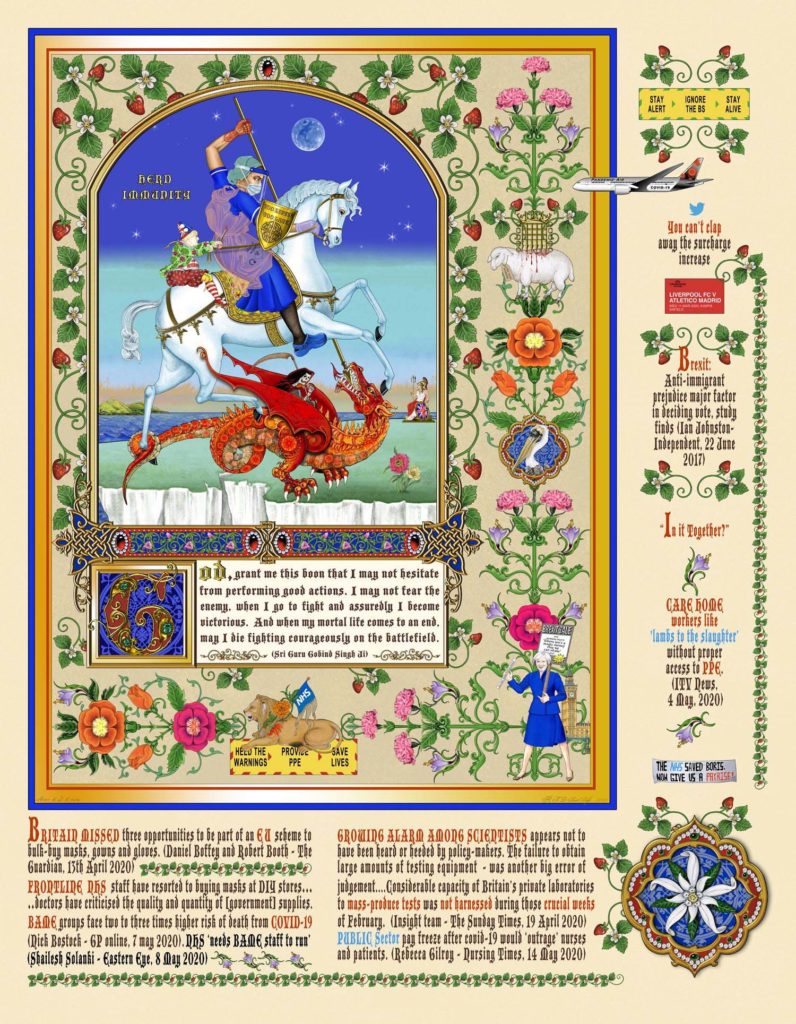 NHS v Covid Fighting on Two Fronts by The Singh Twins, from the Migration Museum’s Heart of the Nation exhibition

It’s an extensive online project but as Aditi Anand, head of creative content at the Migration Museum and curator of the exhibition explains, the project came together very quickly.

“It’s really been a very rapid response to the pandemic,“ she says. “When we came up with the idea of doing this we had a strategy and plan to do an exhibition about the NHS in 2023, which would look at the 75th anniversary – and then Covid happened.

“So the project has come together in the last three months from start to finish. We’ve been reaching out through personal networks, as well as museum and local community networks – casting a broad net asking for contributors, asking for people to share their story.”

The project was says Aditi, “keen to get a very diverse set of stories and experiences”.

“Some of the stories are quite proud and celebratory but others are about the kind of difficulties people have faced,” she explains. “And there’s a much bigger story than Asian doctors and Caribbean nurses.”

A map in the exhibition illustrates this bigger part of the story by revealing the countries where people came from and their nationalities.

“People from 200 countries work in the NHS. And yet we don’t often hear stories reflecting this diversity,” says Aditi. “For example, there are over 22,000 Filipinos working in the health service, and yet previously I hadn’t come across many of their stories. So I thought it was really important to reflect the diversity of the NHS today.”

The online exhibition also includes a newly-commissioned animation by visual storyteller Tribambuka, narrated by acclaimed author and poet Michael Rosen who himself was hospitalised during the Covid-19 pandemic, together with artworks by The Singh Twins and EVEWRIGHT and photographs by Charlie Phillips, Chris Porsz and Rankin, alongside personal and archival photos.

“As the outpouring of affection during the Covid-19 pandemic has shown, the NHS is a source of national pride and is often painted as a distinctly British success story,” says Aditi. “Yet the NHS simply wouldn’t exist without the generations of people from all over the world who have built, grown and staffed it.”

“Heart of the Nation highlights the vital role that migrants have always played in the NHS and the extent to which, just like the NHS, migration is central to the very fabric of who we are in Britain – as individuals, as communities and as a nation. Now more than ever, this is a story that needs to be told.”

Read some of the personal stories from the exhibition:

“In 1938 with the situation deteriorating for Jewish people in Europe, my aunt Lotte was sent by her family to study as a nurse in Manchester. She was 17 and came here on her own. She had only been in Britain a few months when she found out that her brother was in the Sachsenhausen-Oranienburg concentration camp. She went and knocked on doors to find someone who would agree to sponsor him so that she could get him out. In my father’s words, ‘she saved my life’.

Later when Britain entered the war, suspicion fell on immigrants and she was forced to leave her job and interrupt her training. She became a children’s nanny for a time. Eventually she was allowed to work again, and she became a nurse for the NHS and then a psychiatric social worker.”

“I went to Dow Medical College in Karachi. Our education was all in English. Our medical college was based on the British standard. All our teachers had gone to Britain to get their postgraduate qualifications. So all of us wanted to come to Britain.

Those of us who came from India and Pakistan could only get jobs in district general hospitals, which were not as good or sophisticated as they are now. It was virtually impossible for us to get a job in a teaching hospital. And once we became registrars, that was the ceiling. You couldn’t get any higher than that. The applications I sent were rejected just because of my name and where I got my degree. Any interview that I went to, bar one, I got the job. It was a question of getting to the interview stage.”

Mae Appleton, nurse, arrived in 1969 from the Philippines 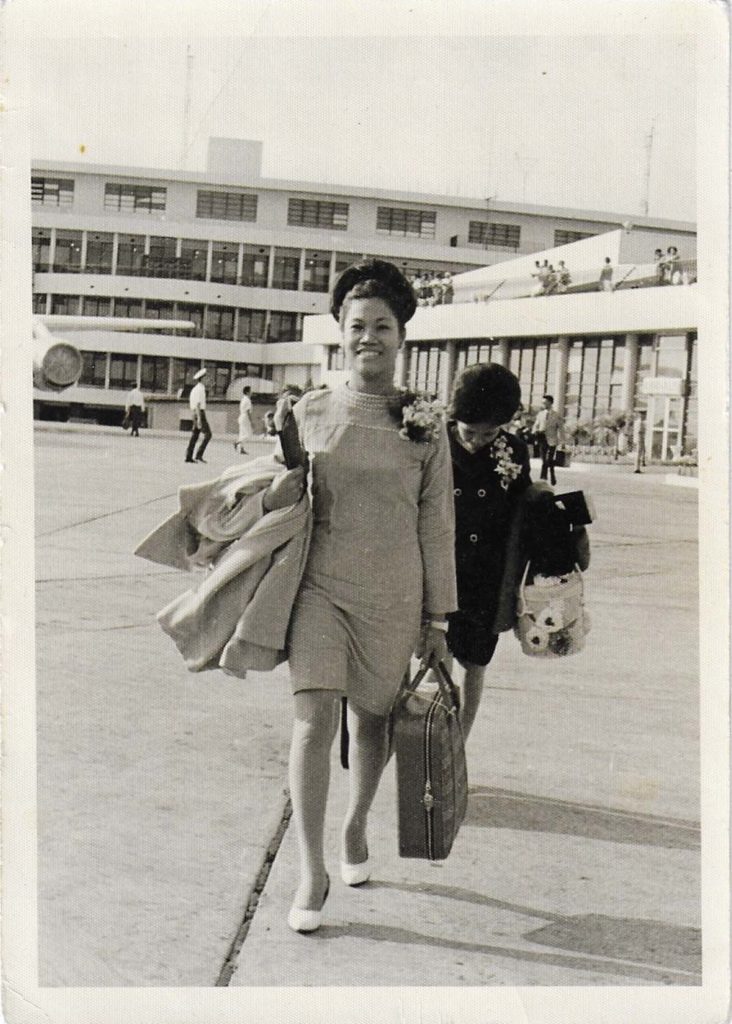 “My friend Tanny and I arrived at Heathrow and had to make our own way to the hospital. We didn’t know anything about England or the currency. When we got to the hospital, we found out that Park Prewett was a psychiatric hospital. We thought it was a general hospital! And Tanny and I looked at each other and thought, ‘we don’t have a clue about psychiatry’. We were both midwives.

We had our own room but we couldn’t sleep because it was very cold. We left the Philippines in the 30s and 40s and we came in here and it was below zero or something like that. I was crying because I couldn’t get warm and then I had to wear socks, pyjamas and a hat and gloves in bed.” 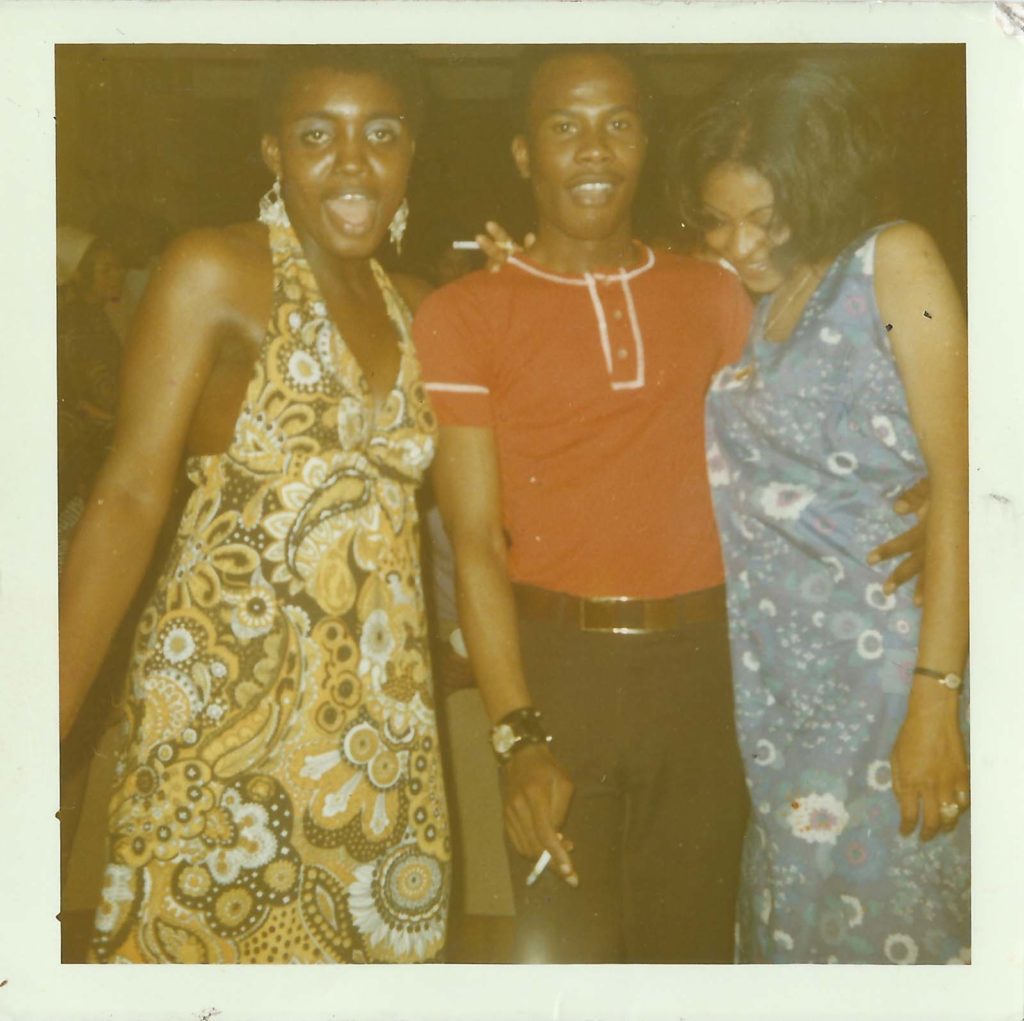 When we worked late on Saturday night and early on Sunday morning, we still went out. We would party all night and return to the nurses’ home about 6am, shower and then go on duty for 7am.

We got dressed up to the hilt when we went out. We often picked clothes for each other. I came with suitcases of clothes that my Mum made for me. My fashion statement was wearing a wig which I set with rollers in different styles. We listened to music all the time, especially when getting ready to go out, as it got us in the party mood.” 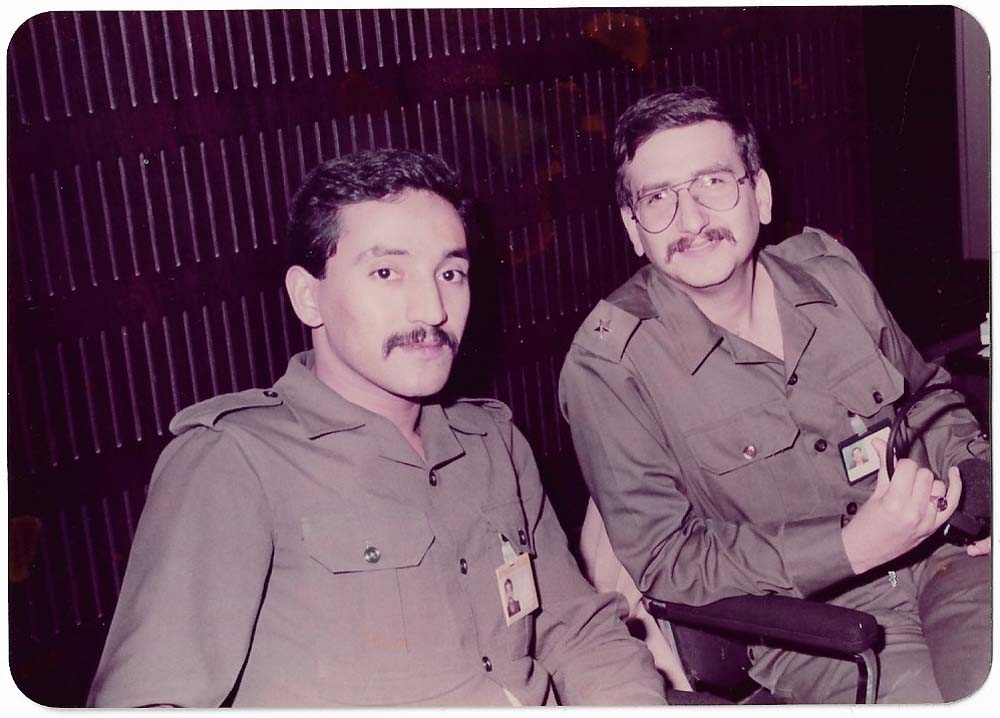 “All males in Iraq are conscripted into the army. In 1980, I joined as a junior medical officer. Within one month, Saddam Hussein started the war with Iran. Having had a bit of neurosurgical training, I ended up in a big hospital doing a lot of war neurosurgery – young men who had been shot, shrapnel wounds to the brain. It was very unpleasant, messy work.

The first job I applied for in the UK, I was interviewed by three senior consultant neurosurgeons and they asked me about my previous experience and I was telling them I did trauma neurosurgery in Iraq during the war. They all three went quiet for a minute. And they said: ‘You have more experience in trauma neurosurgery than the three of us put together’. Those were the skills I brought with me from a warzone.”

Chris Porsz, Behind the scenes at Peterborough General

Vince Howlett circa 1983 by Chris Porsz, from the Migration Museum’s Heart of the Nation exhibition. Image Chris Porsz

“In 1974 I dropped out of my university sociology course to become a hospital porter in Peterborough. Instead of writing long boring essays, I turned my camera on society and colleagues at work.

My mother was a Holocaust survivor so knew exactly what hatred leads to and my images are a tribute to that generation and the sacrifices they have made for us in our NHS.”

Explore the exhibition online at:  heartofthenation.migrationmuseum.org/ 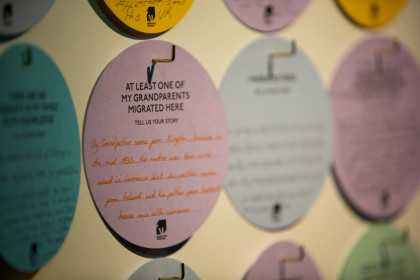 The Migration Museum explores how the movement of people to and from Britain across the ages has shaped who we are – as individuals and as a nation. Come and visit us at our new home in the heart of Lewisham Shopping Centre, share your story and explore how it…