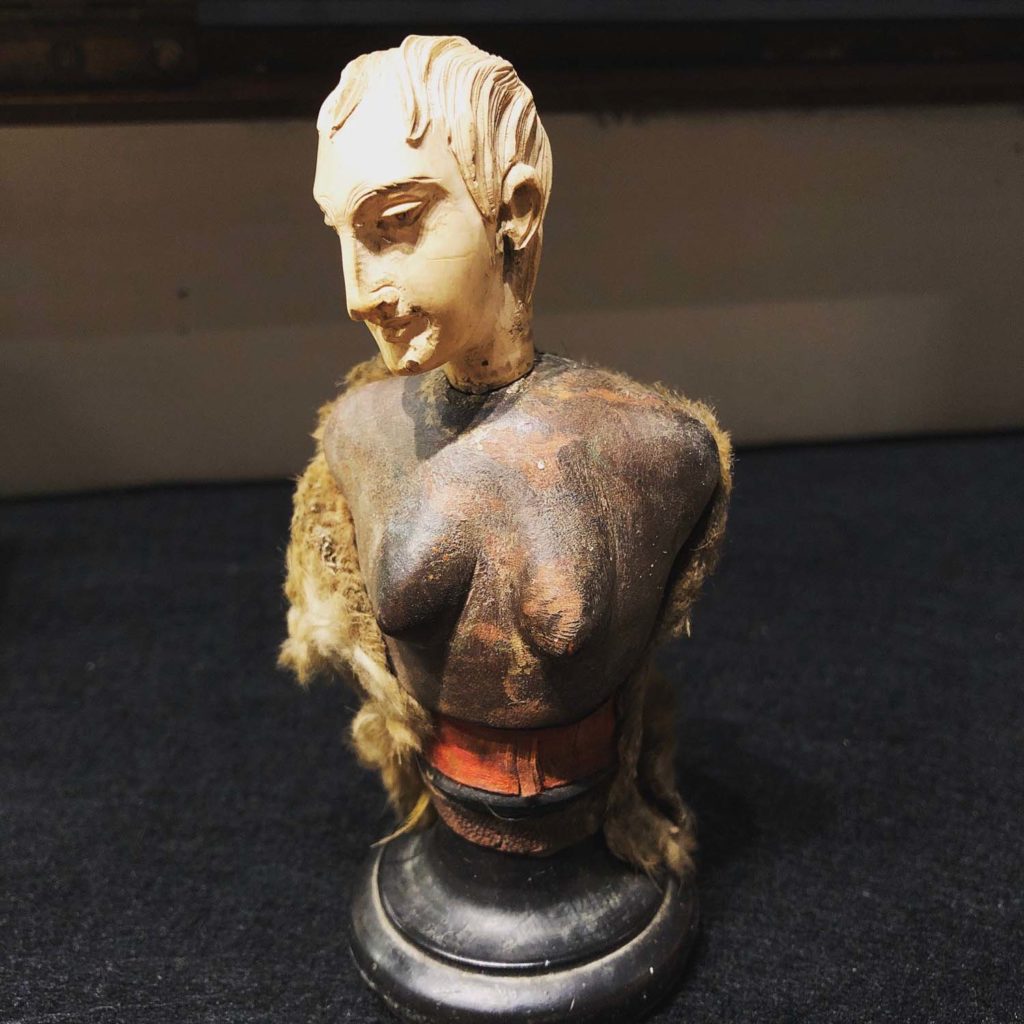 This odd little figure consists of a female torso along with a refined male head carved from bone. A piece of fabric has been attached to the back. The museum’s founder, Cecil Williamson, had it listed as a ‘Homosexual Love Charm’. Cuurent museum director Simon Costin says: “I imagine it was a more complex meaning personally.”

As the Museum of Witchcraft launches a memory book and other innovative projects during the Covid-19 crisis, we talk ‘fizzing’ objects and magical practice with Museum director Simon Costin

Like many museums in 2020, the Museum of Witchcraft and Magic has had to adapt to survive. Currently closed until visitors can safely enter the small, snug building that houses the best occult collection in the world, the museum in Boscastle is more than ever working creatively in response to Covid 19.

The first edition of an already-sold out quarterly fanzine, Conjuration, has been launched and they’re currently working on merchandising and publishing projects, based on themes from the MWM archive and collection. The Museum’s popular Instagram feed has also come into its own as an effective way of talking to their worldwide audience – and for selling their products.

The latest creative project to emerge out of this magical and creative hub is a book of visitors’ memories, which will be published next year as the Museum of Witchcraft & Magic celebrates its 70th birthday – having first opened its doors in 1951 on the Isle of Man.

Tucked away on the north Cornwall coast, with the nearest train station at Bodmin, it is perhaps unsurprising to learn that almost 80% of the visitors who make the pilgrimage to Boscastle come from the vast influx of tourists during the summer season. But, says Museum Director Simon Costin, there is also a die-hard cohort of magical practitioners and academics with an interest in all things occult. 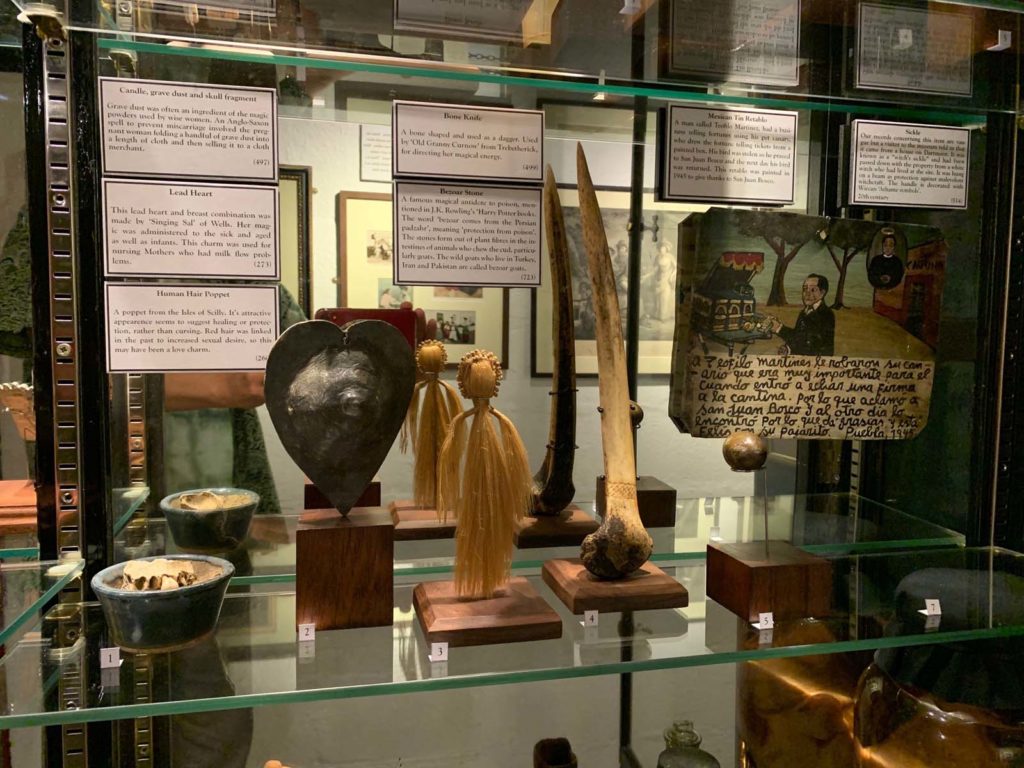 One of the recent re-displays from the Folk Magic section of the museum. This particular cabinet looks at many of the pieces in the collection which deal with diﬀerent forms of magical practice across the world where forms of sympathetic magic are used. 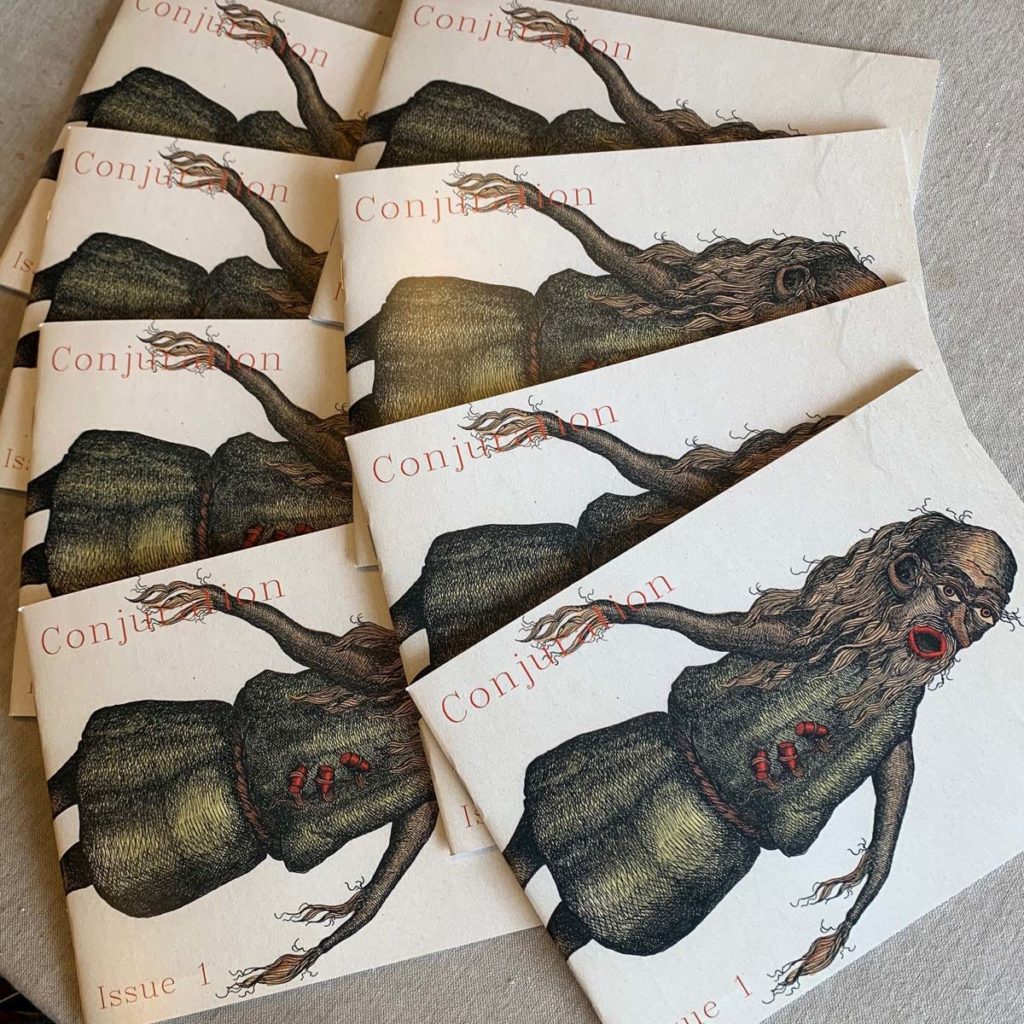 The conjuration fanzine has been a runaway success for the Museum. 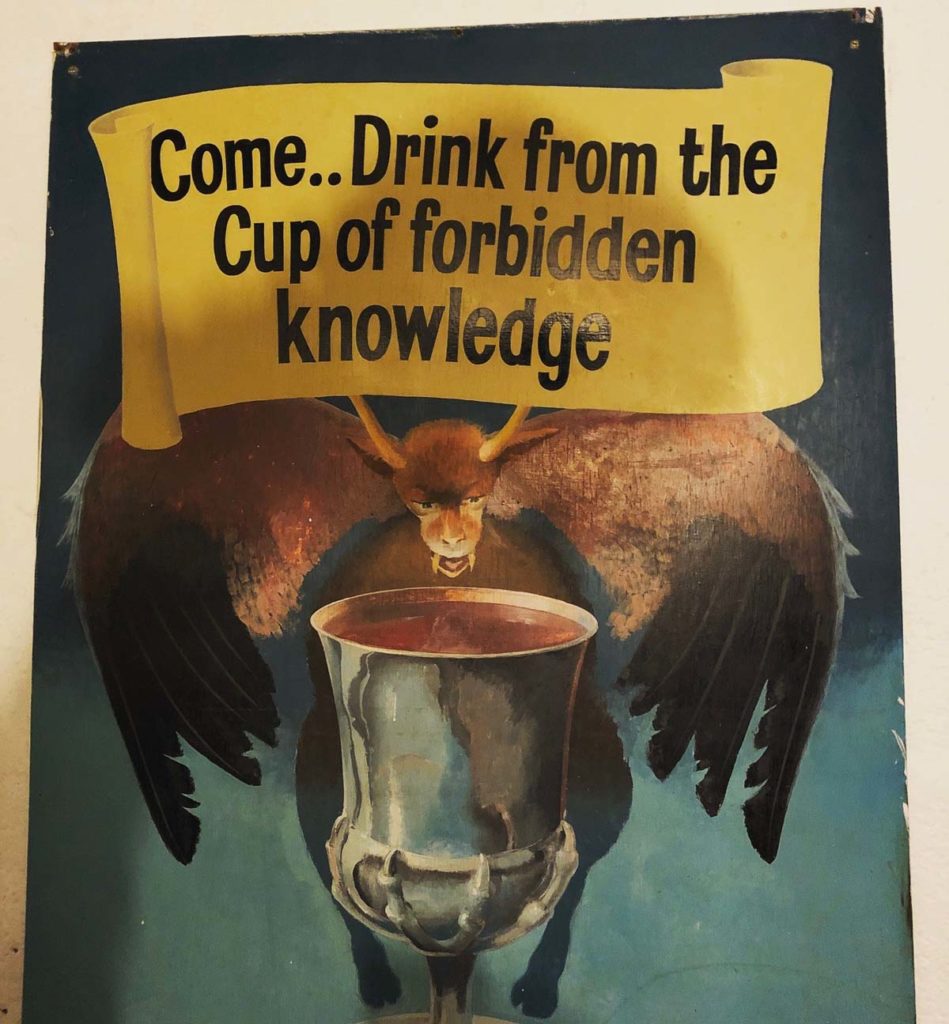 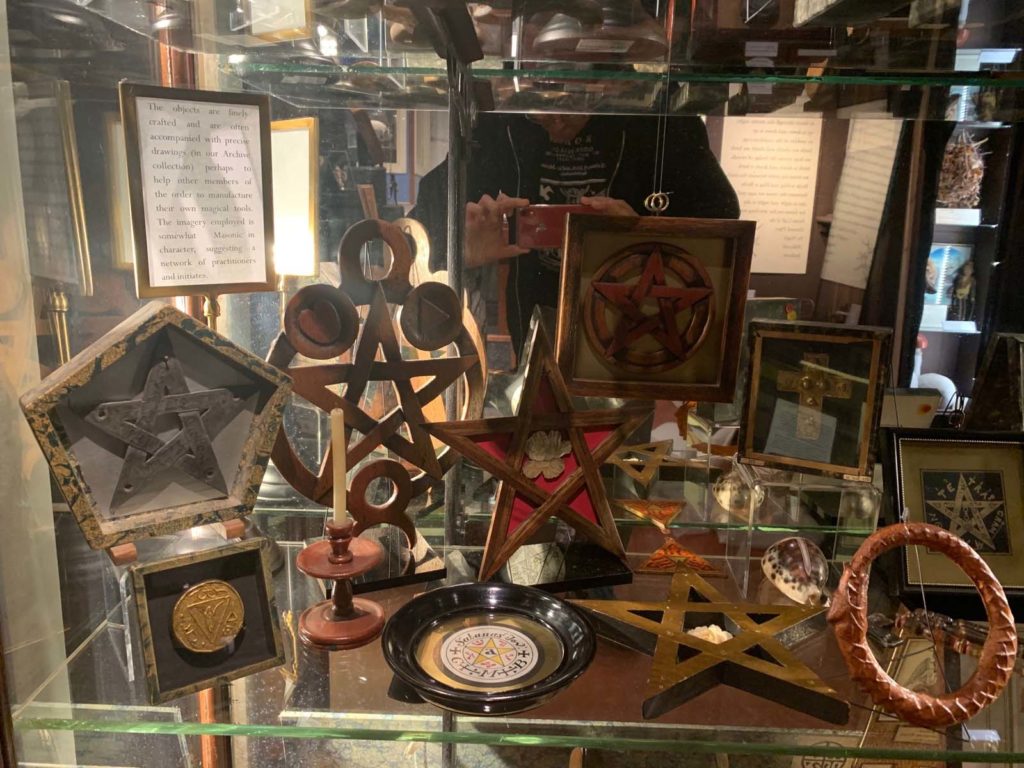 Items from the Richel-Eldermans Collection. All of the pieces in this collection were handmade, either by Bob Richel himself or his father J. H. W. Eldermans and represents one of the most enigmatic sexual magic collections in the world.

“About 20% are magical practitioners or academics who have a deep interest in the occult,” he says. “The large summer footfall is due to people on holiday which is why our seasonal opening hours reflect that. We normally open on April 1 and then close around Halloween. We open a little bit around Christmas and New Year because there’s quite a lot of people down here then as well.”

Costin’s own journey to Boscastle really began in August 2004 when, like many others, he turned on the TV as reports came in of the devastating flash floods in the Cornish village.

“I thought ‘oh no it will probably be washed away and irrevocably damaged’” he recalls of seeing the eight-metre surge of water that overwhelmed the village and its museum.

“But of course that wasn’t the case because as the flooding took place over a number of hours [then director] Graham King and his team were able to remove quite a lot of the objects from the ground floor and very little was actually lost to the flood.”

As he was thinking of ways he could help, Costin’s friend, the artist and writer Jane Wildgoose, introduced a contact at the Geology Museum in London, who were then decommissioning a batch of beautiful, Victorian mahogany display cases.

As the mammoth clean-up progressed, Costin spoke to Graham King who gratefully accepted the cabinets to replace all of theirs on the ground floor, which had been smashed to pieces by the floods. 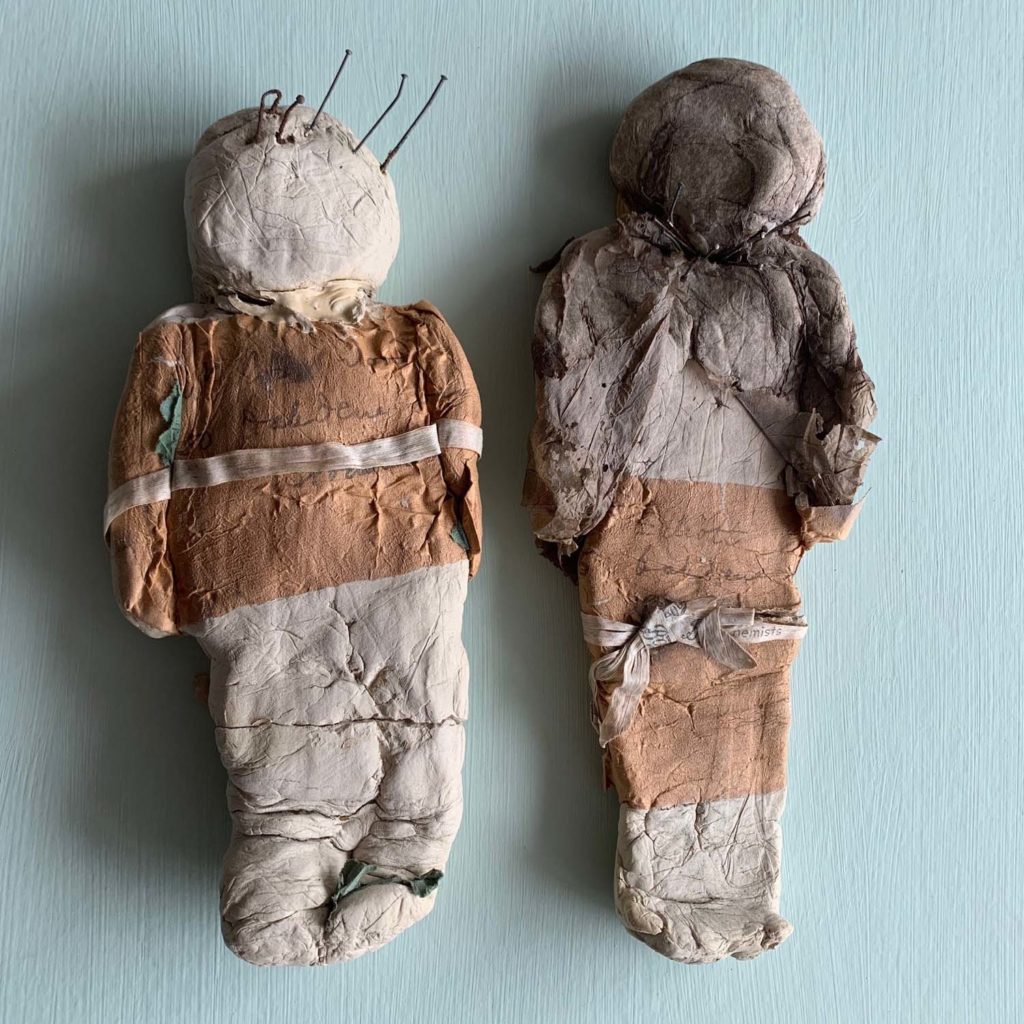 Two poppets made by a jilted builder, who’s wife ran away with another woman. The bindings give their addresses in Brockham, Surrey and research undertaken by Dr Louise Fenton discovered who they were but not their fate. Likely to date from 1954, when the two women moved in together. 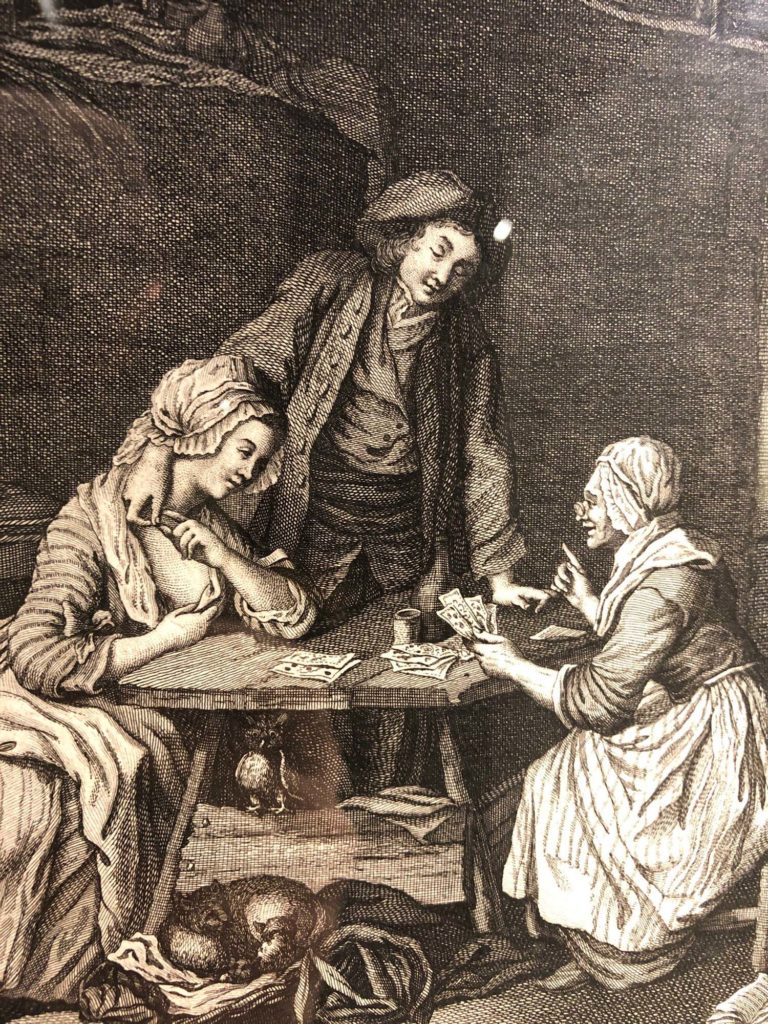 A 19th century print showing a couple having their fortune told by a Pellar or ‘Cunning’ woman. 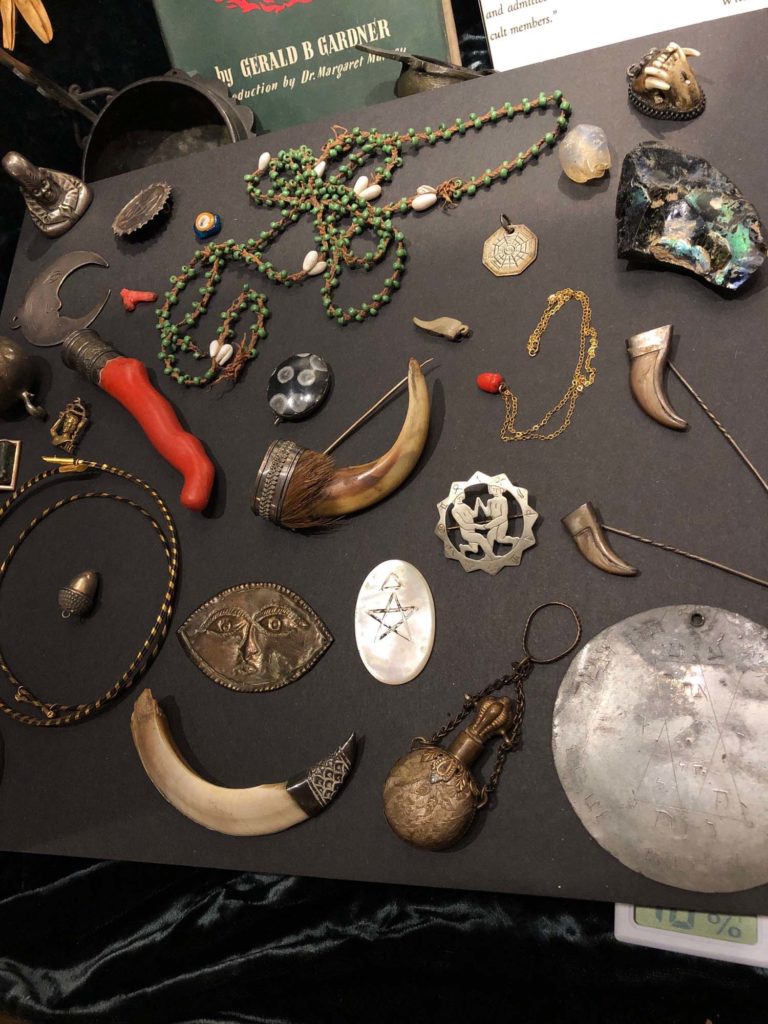 A selection of charms, amulets and talismans from Gerald Gardner’s collection that were shown at the Isle of Man incarnation of the museum. 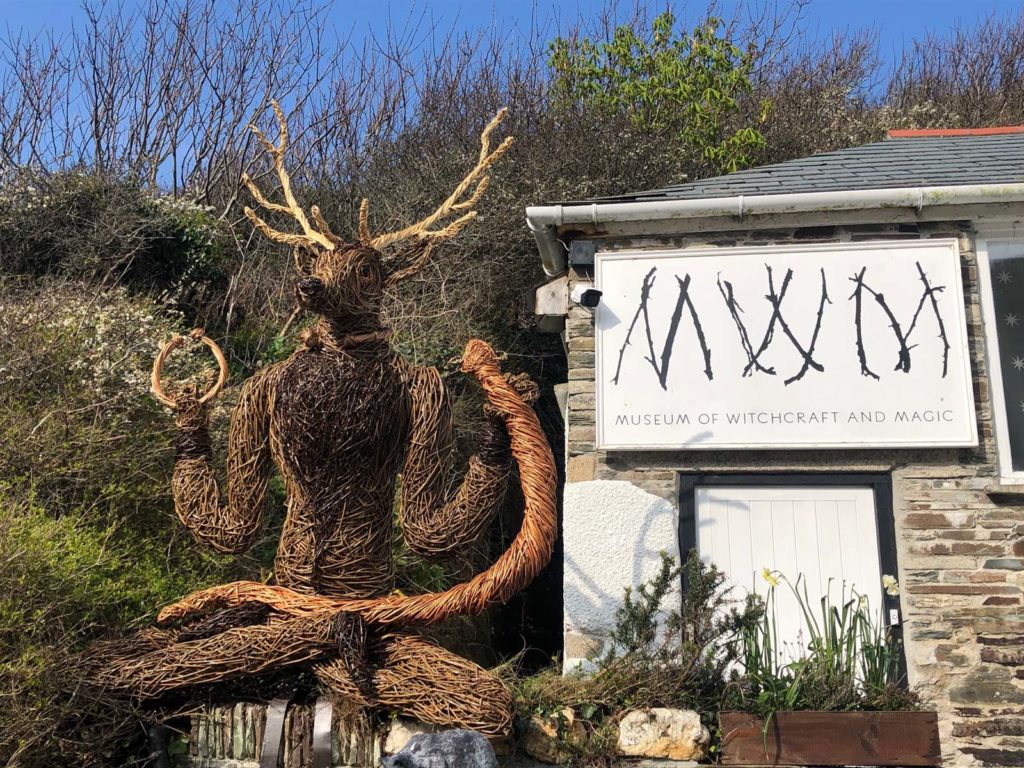 Outside the Museum of Witchcraft and Magic. Courtesy MWM

That cemented the relationship and Costin became a regular visitor, immersing himself into the world of occult lore, becoming increasingly involved with the Museum until he eventually took over as owner and director in 2013.

So, having recently launched an appeal for visitor impressions and memories, what were his first impressions of the museum and its collection, which he finally encountered for the first time in 2005?

“It’s a similar kind of reaction I get in any kind of ethnographic museum,” he says, “in that the objects are still very potent, because a lot of them have been used in a ritual or magical context – they’re still fizzing – if that makes sense?

“They have a potency to them and because of the huge amount of objects in the museum (there are literally thousands of objects crammed into a relatively small space) it can be quite overwhelming.”
As anyone who has visited the museum will know, visitors are pitched headfirst into a magical realm of objects, which are all competing with one another on different levels. Not just the physical but the spiritual as well.

“That was really intriguing to see because I’d only ever experienced it at places like the Museum of Mankind that used to be in London, or the Pitt Rivers in Oxford” adds Costin of his first encounters with the size and depth of the collection. 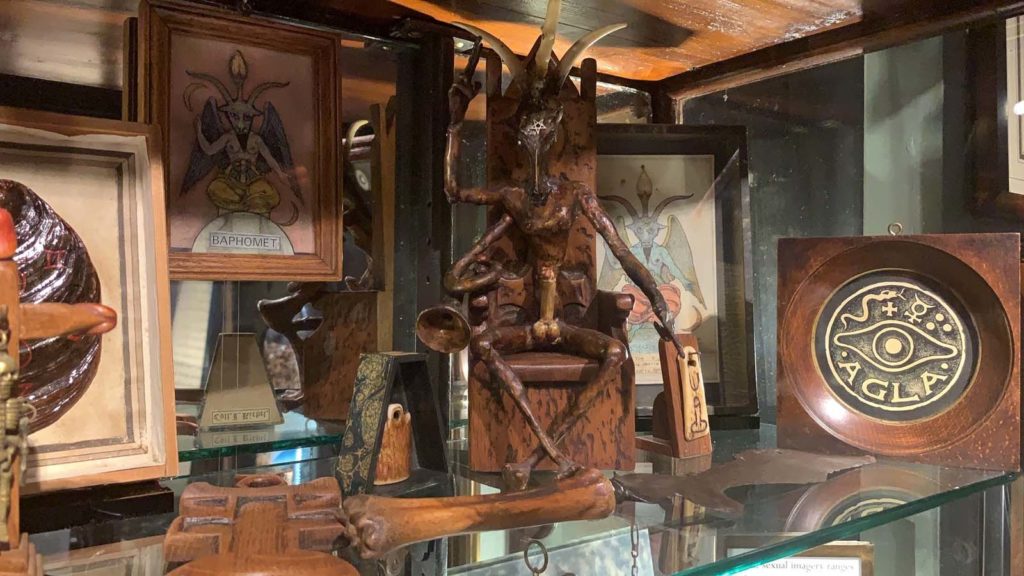 Items from the Richel Collection including watercolours and a fgure of Baphomet, thought to be the deity that the Knights Templar worshiped. 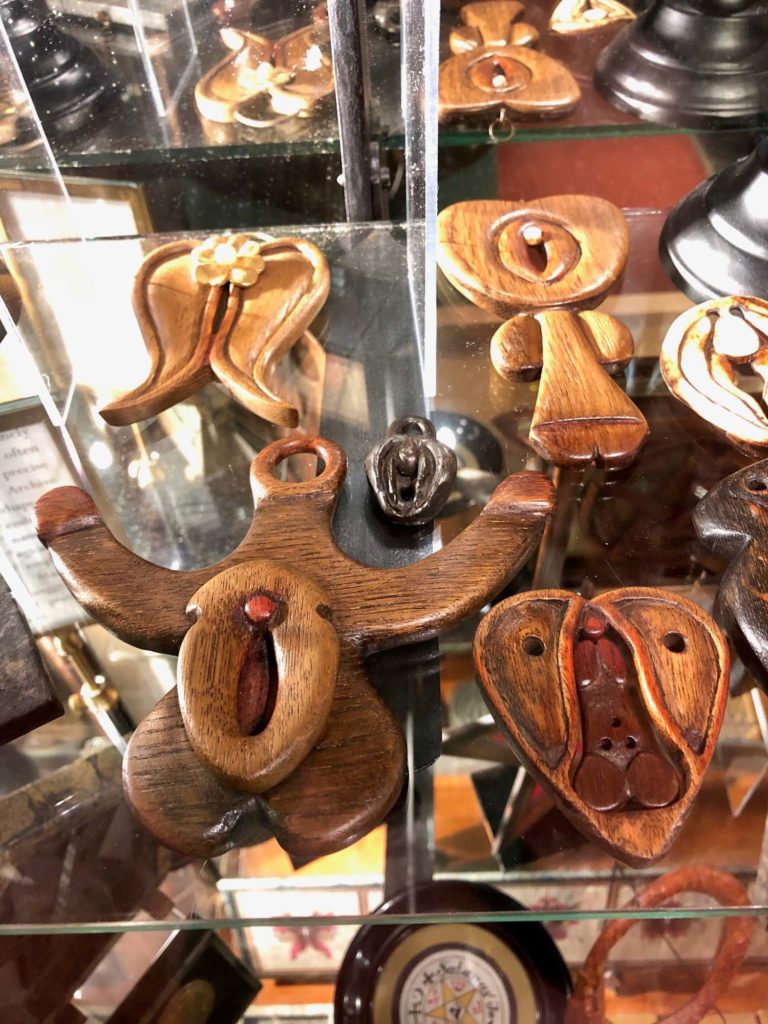 Many of the artefacts held in the Richel Collection relate to various forms of Sex Magic. The purpose is unknown due to the index having been burnt before the collection was acquired. They mostly date from the mid 1960’s onwards. 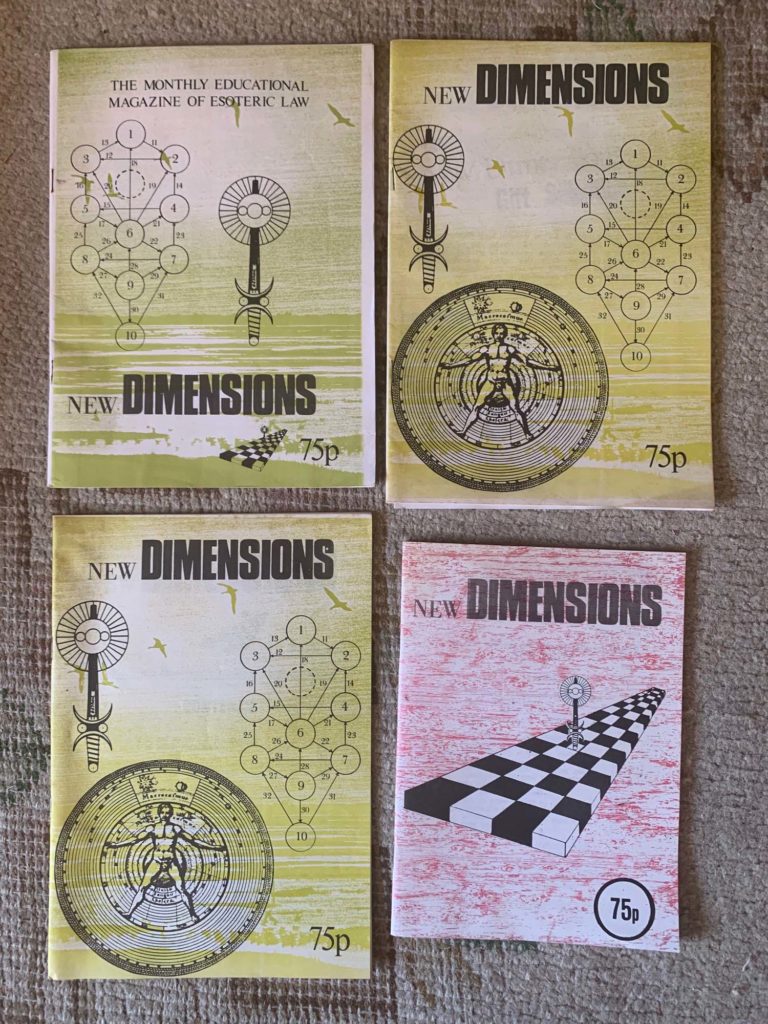 Part of the Museum’s extensive archive houses a complete run of the New Dimensions magazine. ‘New Dimensions’ was a periodical founded by Carl Llewellyn Weschcke of Llewellyn Publications in 1963 at the very start of the late twentieth century revival of interest in the occult. From the outset its editor was Basil Wilby (most of whose works were published under the pseudonym Gareth Knight) a British esotericist and occult author who began his esoteric training in 1953 as a member of the Fraternity (later Society) of the Inner Light, the magical order founded by Dion Fortune. Writing in the first issue of ‘New Dimensions’ Wiley observed “Our ideal is to promote a wider understanding of what occultism stands for – and to open the way to unity of purpose among all esoteric schools.” 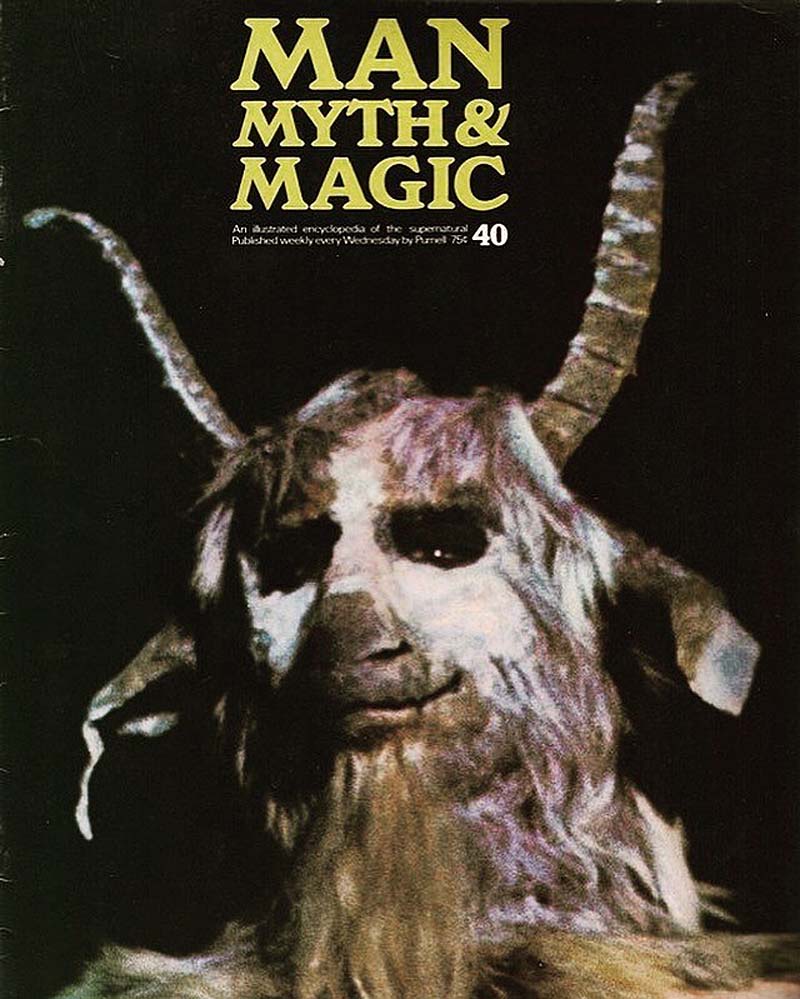 All museums are filled with objects that have the power to entrance but most of the ones you encounter at the Museum of Witchcraft and Magic are made from natural materials like wood, hide, hair, teeth and bone – and they all seem to carry a power in them. Within contemporary witchcraft there is an emphasis laid upon the handmade and the designing and making of your own magical working tools, which effectively means the bond people create with those objects – the tools of their trade – is that much stronger.

Yet for years these powerful objects were left to speak for themselves. Since the founder Cecil Williamson set up camp in Boscastle in 1960 with his magical collection of occult objects, visitors were largely left to their own devices. Costin is in the process of unpicking the existing loose thematic narratives to make connections and draw comparisons between different beliefs around the world.

“For instance we have a blackthorn blasting rod, which is quite a powerful object,” he explains, “it’s used for cursing basically and is a potentially nasty thing in a way, but sitting alongside that in a new display will be a version of the same thing but from Japan. So these beliefs carry across.

“Prior to this there was a taxonomy in place that categorised things into sections, a healing section, a cursing section and so forth… But for me it’s like trying to measure a cloud with a ruler; it’s virtually impossible to categorize magical objects because they defy categorisation; one thing that could be used for cursing could also sometimes be used for healing.”

In this subjective realm of objects and their meanings, it’s often the visitors – particularly the magical practitioners – who prove to be an invaluable source of information, especially when objects come into the collection that the museum knows very little about.

“Magical objects – especially if they are handmade by an individual who wasn’t practicing within the Wiccan framework (which is quite defined) – can differ greatly from person to person,” explains Costin. “That’s what’s wonderful about magical practice – you make your own rules to an extent. There are no rule books saying ‘thou shalt not do this, that and the other’. You use your own intuition, and your personal history and development is so important.” 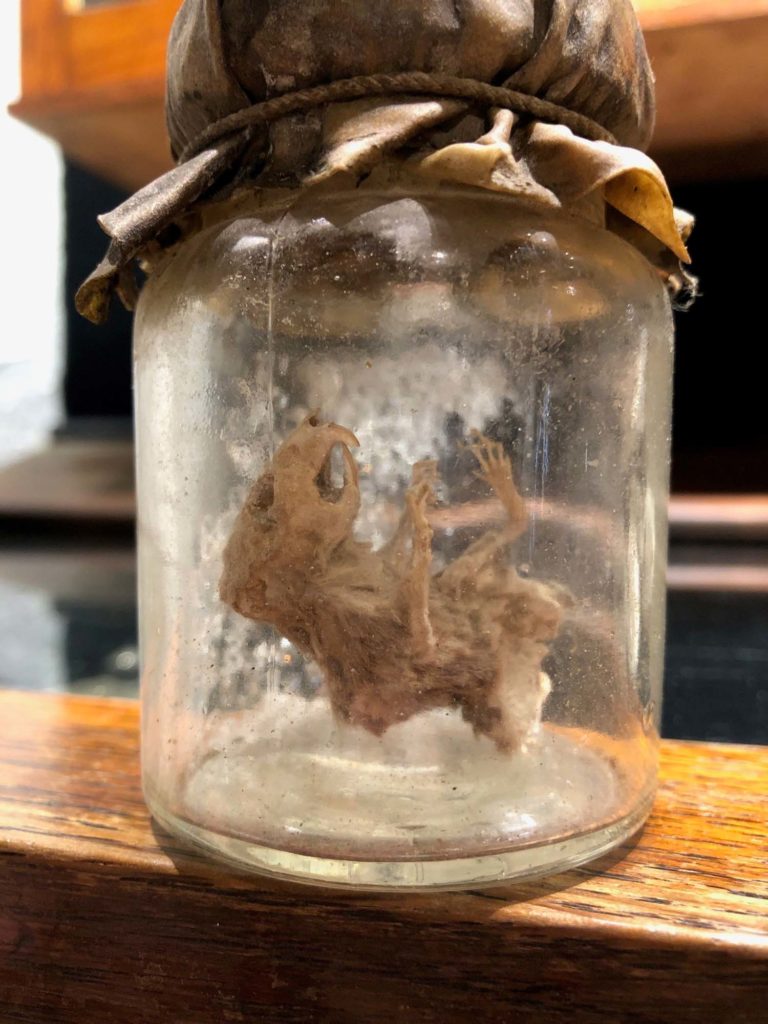 Original text by Cecil Williamson: ‘Poor little Mick Mouse, done to death in a nasty old jar, well, this is real west country stuﬀ, in this case a mouse is caught befriended and fed for a while, then death is induced and the death house jar is placed in the barn or store suﬀering from the inroads of a plague of mice. What then happens is that the dead mouse’s spirit has words with its kith and kin laying havoc in the barn and one presumes that it says, “look here you chaps, enough is enough. Push oﬀ and nibble some place else, over and out”. Simple as that. The strange thing is that it does work, and what is more so long as Micky’s jar remains in the barn they do not come back no matter how tempting the stock held in store. 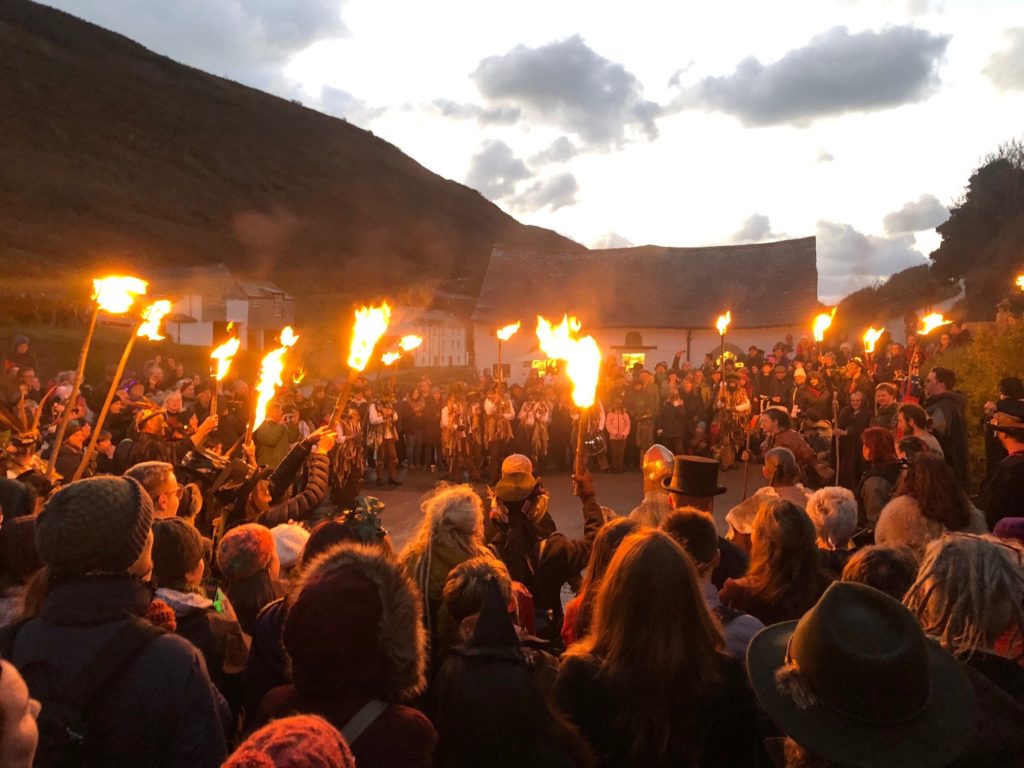 The museum also opens at Halloween and New Years Eve. 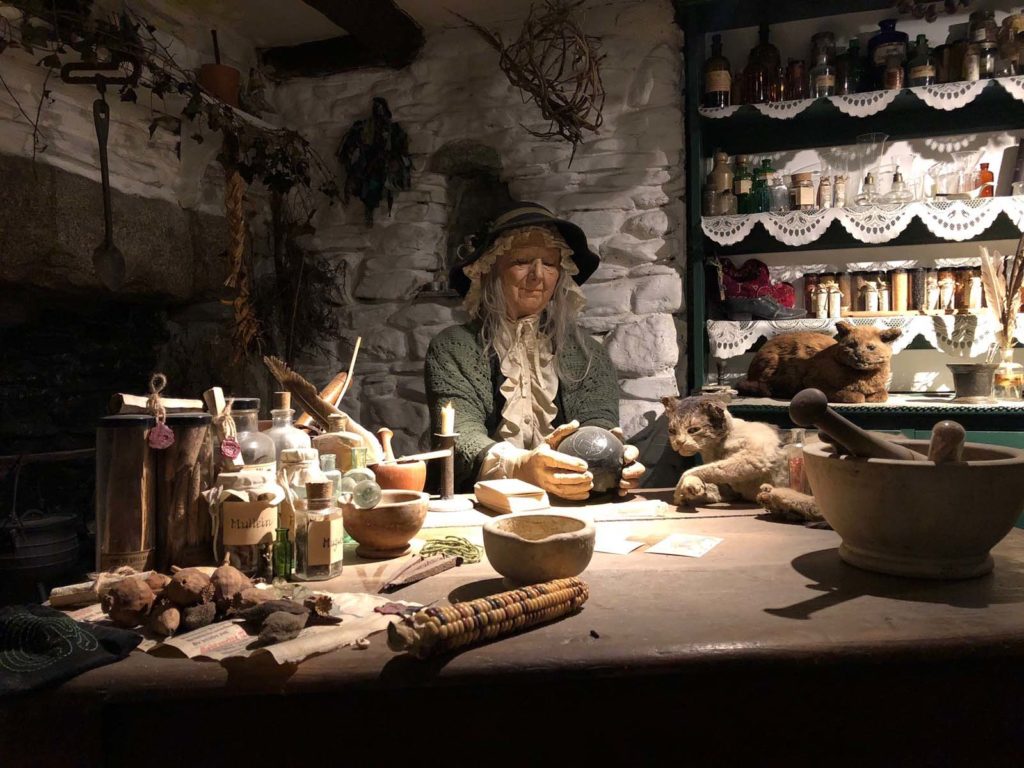 The witch mannequin was found amidst all the silt after the flood. 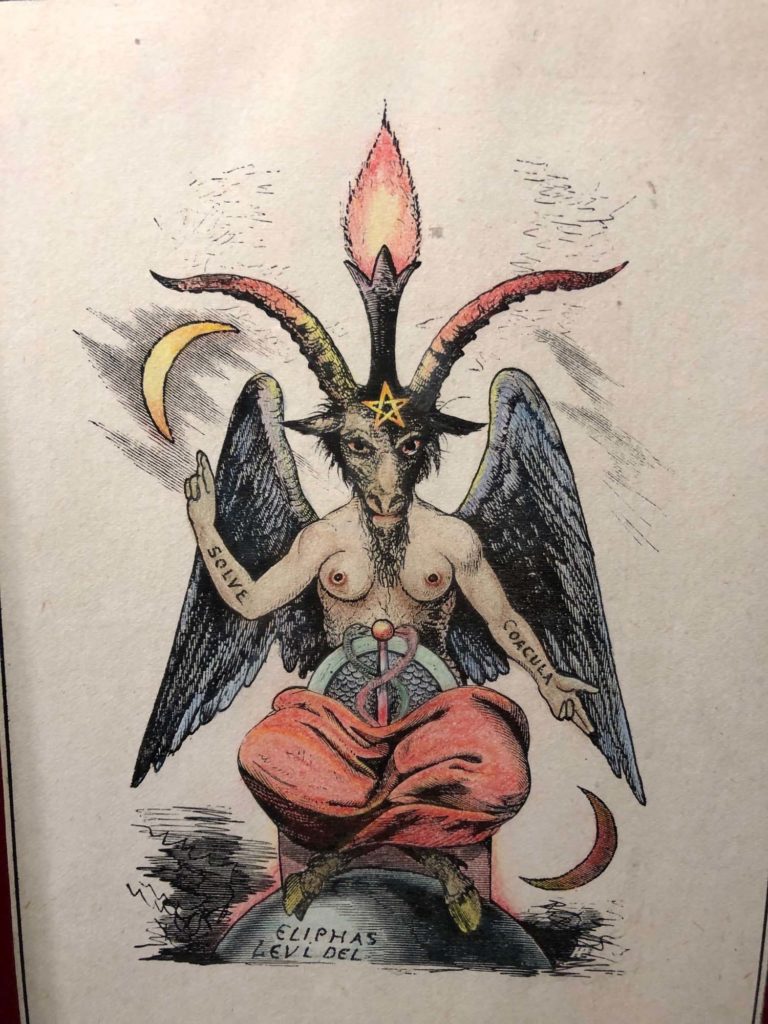 But the latest book project is not just about people with deep, magical knowledge, says Costin. “We had a woman in her forties who came when she was 18 and said the museum changed her entire life. The way she described certain objects and found them empowering as a woman was really beautiful. But then we have also had magical practitioners who have said this is the largest repository of occult knowledge in the world. Whereas places like the Pitt Rivers Collection, which deals with quite a lot of UK-based magical objects, tend to finish in the nineteenth century. We are working on a 21st century display, looking at where magical practice is currently, and where those beliefs overlap.”

The new gallery display looks at groups such as the politically active Satanic Temple in America, the Goddess movement through the 1990s and the increasing interest in Heathenism and the way that’s been co-opted by the far right.

“So it’s really interesting to see what people are doing now,” he adds. “It’s become far more political. We represent UK magical belief as it has been and as it is, but we also draw comparison between world magical beliefs by not only using the views of academics but also the views of magical practitioners themselves.”

To be part of this story and contribute to the history of the Museum of Witchcraft and Magic, head to – museumofwitchcraftandmagic.co.uk/photos/mwm-70/

The Museum of Witchcraft houses the world's largest collection of witchcraft related artefacts and regalia. The museum has been in Boscastle since 1960 and is one of Cornwalls most popular museums. Attached to the museum is library which has over 7500 occult related titles, and can be accessed by appointment,…