The Horniman Museum’s World Gallery features artefacts from the museum’s world-renowned anthropology collection. One of the most significant in the UK, the diverse collection comprises around 80,000 objects from all around the world. We take a look at a few of the marvellous masks on display. 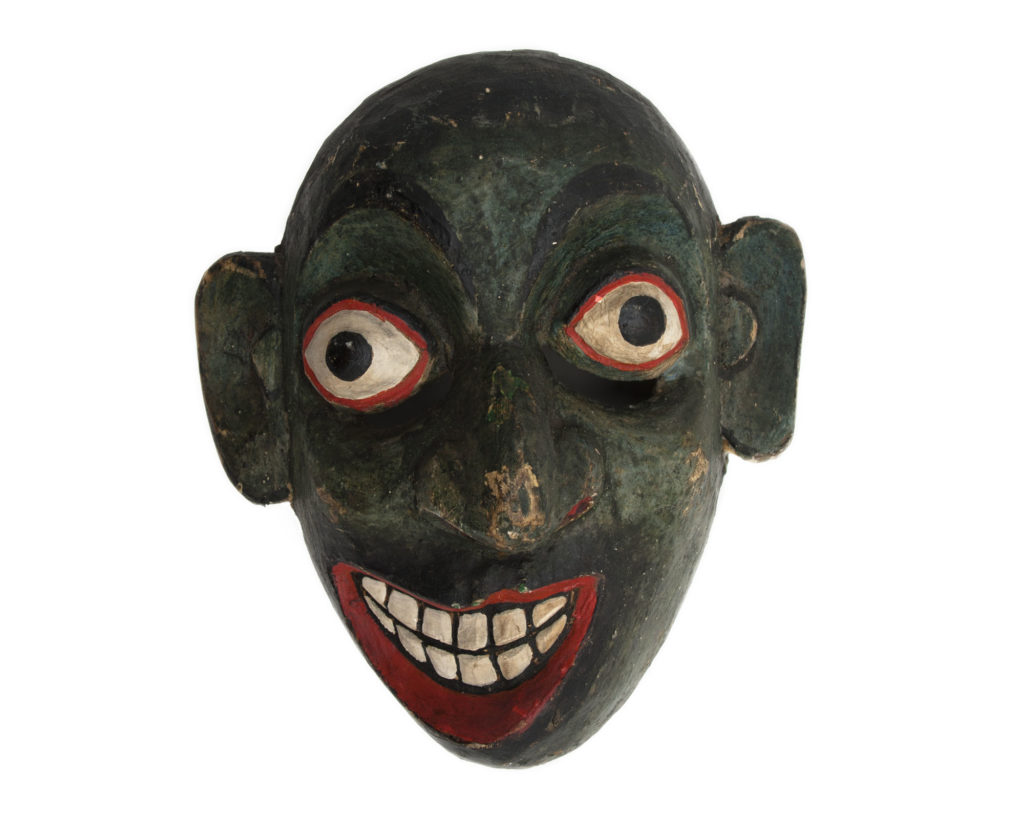 Sanni Yakuma is a traditional ritual performed in Sri Lanka. It is an exorcism ritual, or tovil, designed to confront and banish a number of demons, representing diseases of the body, mind and spirit, from a patient.

Common diseases and complaints that are typically confronted in this ceremony include malaria, insanity, deafness, cholera and even nightmares about snakes. This particular mask represents a demon named Kora Sanniya, who brings lameness and paralysis to its victim; this demon is depicted with an off-centre mouth, suggesting a stroke.

The ritual, which involves dancers performing complicated dances accompanied by drumming by the healer, sees the once-ferocious sickness demons humiliated and their disease banished. 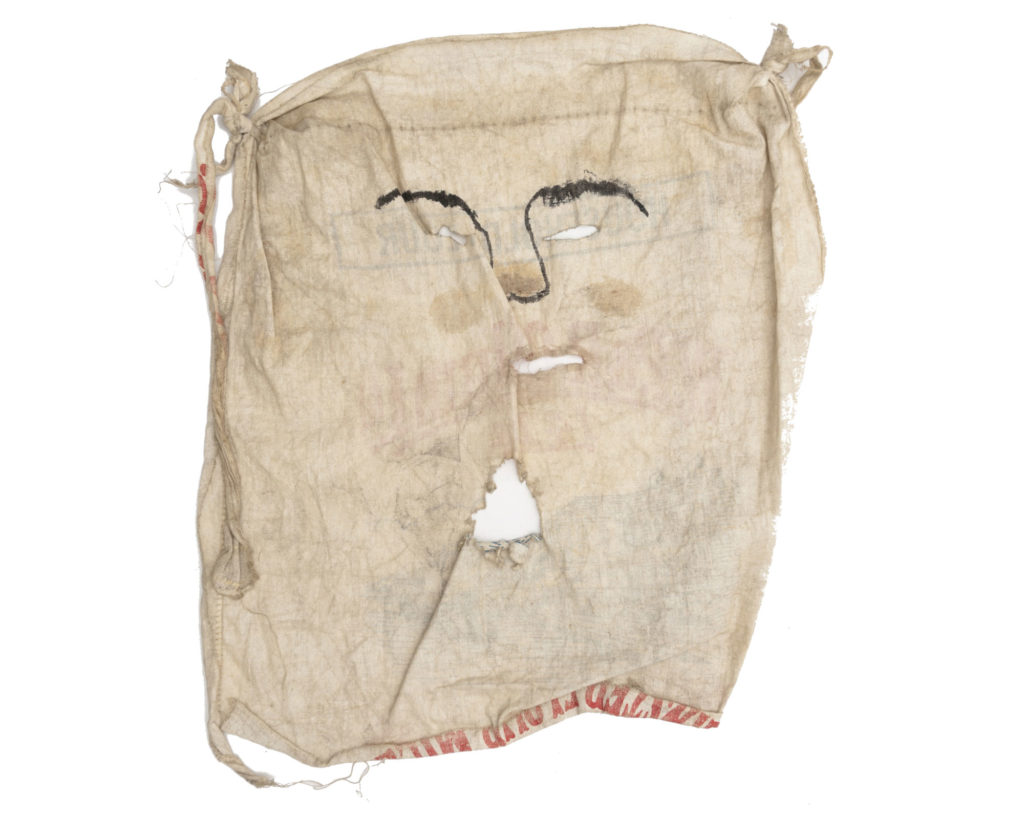 This mask, dating from the first half of the 20th century, is made from a piece of cloth from a flour sack. It was used to celebrate Halloween in Ireland, where the holiday has its roots in the Celtic season festival of Samhain.

Samhain signified the end of the pastoral cycle, and the start of the new year; it was also a time when the spirits of lost friends, family and foes would return to visit their former homes. The practice of visiting your neighbours while wearing frightening masks and costumes started in the 16th century. Masks were also used to bewilder spirits and disguise you from any malevolent otherworldly visitors. 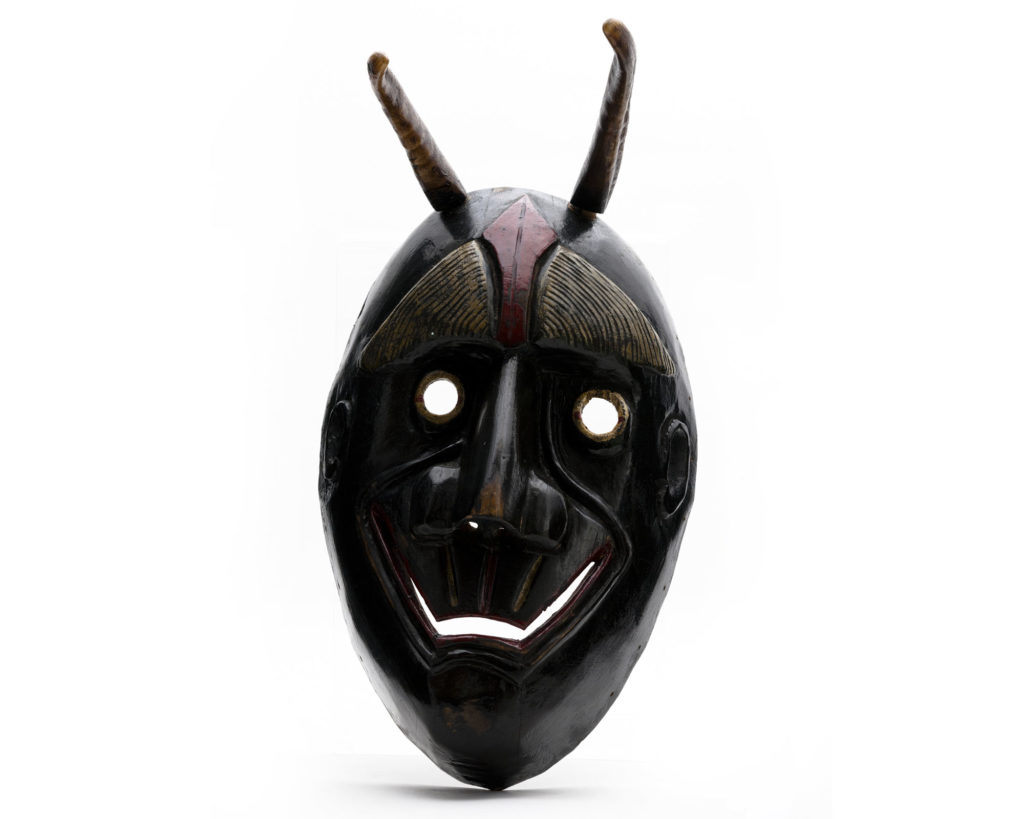 This is a Swiss mask, depicting a kind of winter demon – it would have been used during a winter festival or ceremony. Switzerland has a colourful heritage of folklore and mythology, comprising a whole host of mythical beings, fairies, spirits and demons.

Its diverse culture is one Switzerland’s most prominent qualities, and its society and traditions are influenced by Italian, French, German and Romansh cultures. This diversity, and its spectacular Alpine landscape, have led to Switzerland’s rich folklore and folk traditions.

Winter festivals mark the long and bitter Alpine winter, and are associated with several folkloric characters including the Urnäsch Silvesterkläuse, who wish families prosperity while dressed in their elaborately-decorated outfits; the mischievous Tschäggättä, who chase after women and children in the streets; and the terrifying Krampus – the Christmas devil. 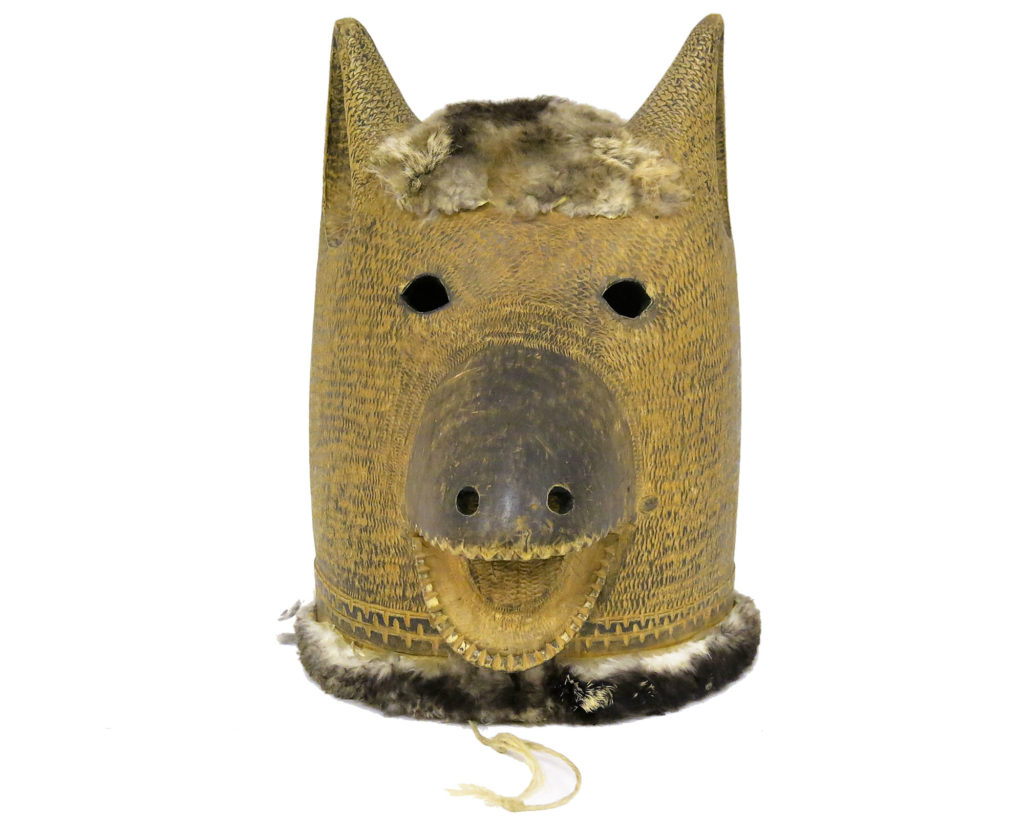 This magnificent bear mask was made in Slovakia, and would have been used in Christmas celebrations and during the Slavic carnival of Fašiangy – a raucous festival marking the transition between winter and spring, which is followed by a 40 day fast.

The bear mask would have probably been worn with a fur coat and belts covered in bells – the menacing costume was designed to scare away evil spirits. The bear symbolises strength and, because they go into hibernation and are seemingly reborn in the spring, can also symbolise rebirth and new life. 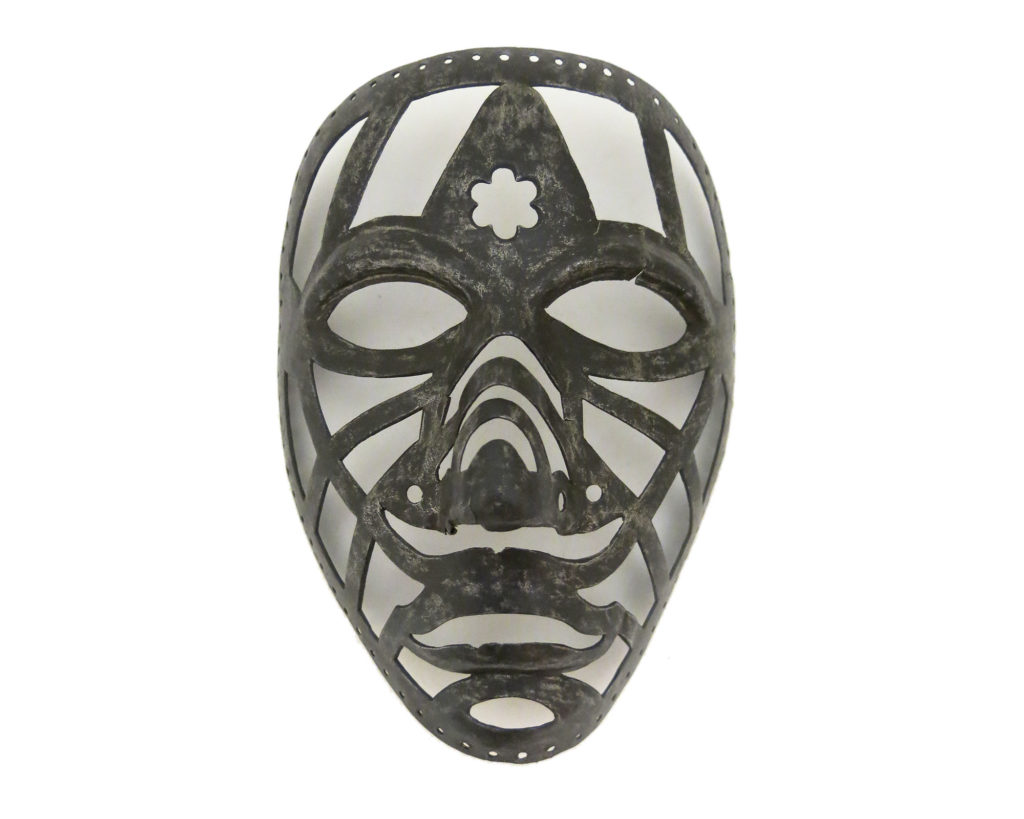 This intriguing mask is something of a mystery. While it’s known to have originated from Italy in the 16th-17th century, its purpose is unknown.

When it was sold at auction at Sotheby’s in the mid-50s it was described as a rare executioner’s mask, but it’s now thought that it is more likely to be a kind of armoured face mask, perhaps used to protect a horse rider’s face when riding through wooded areas.

Whatever its intended use, the mask’s striking open ironwork design clearly piqued the interest of American businessman, newspaper publisher and politician William Randolph Hearst. The mask came from his collection at the medieval St Donat’s Castle in Wales, which he purchased as a gift for his lover, the American actress Marion Davies.

A ceremonial mask from a remote Melanesian island 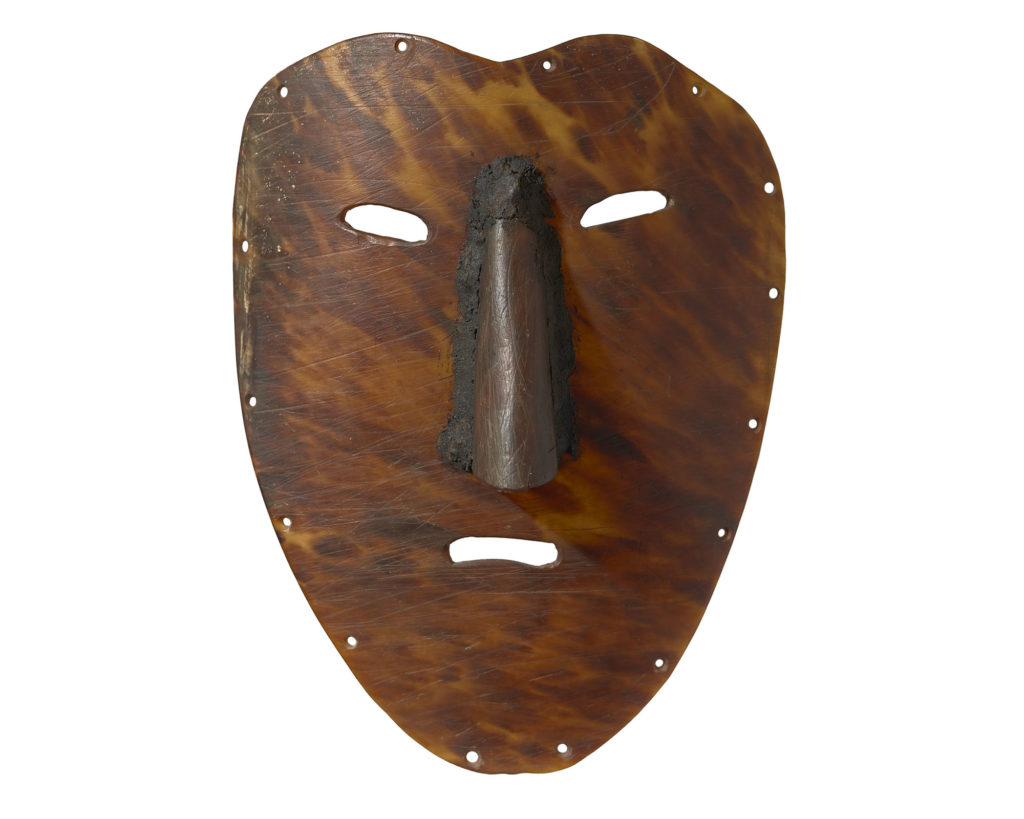 Originating from the Torres Strait Islands – a group of around 300 small islands in the strait between Australia and Papua New Guinea – this ceremonial mask is characteristic of this part of the world.

It’s made from two plates of hawksbill turtle shell which have been softened with boiling water and shaped over a wooden form. The holes around the edge would have held feathers, possibly from the notoriously dangerous cassowary bird.

Masks such as this would be used in island rituals and ceremonies, including funerals and increase rituals, which are performed to increase the numbers of animals and fish available for hunting.

These masks, and many more cultural treasures are on display in the Horniman Museum’s World Gallery.