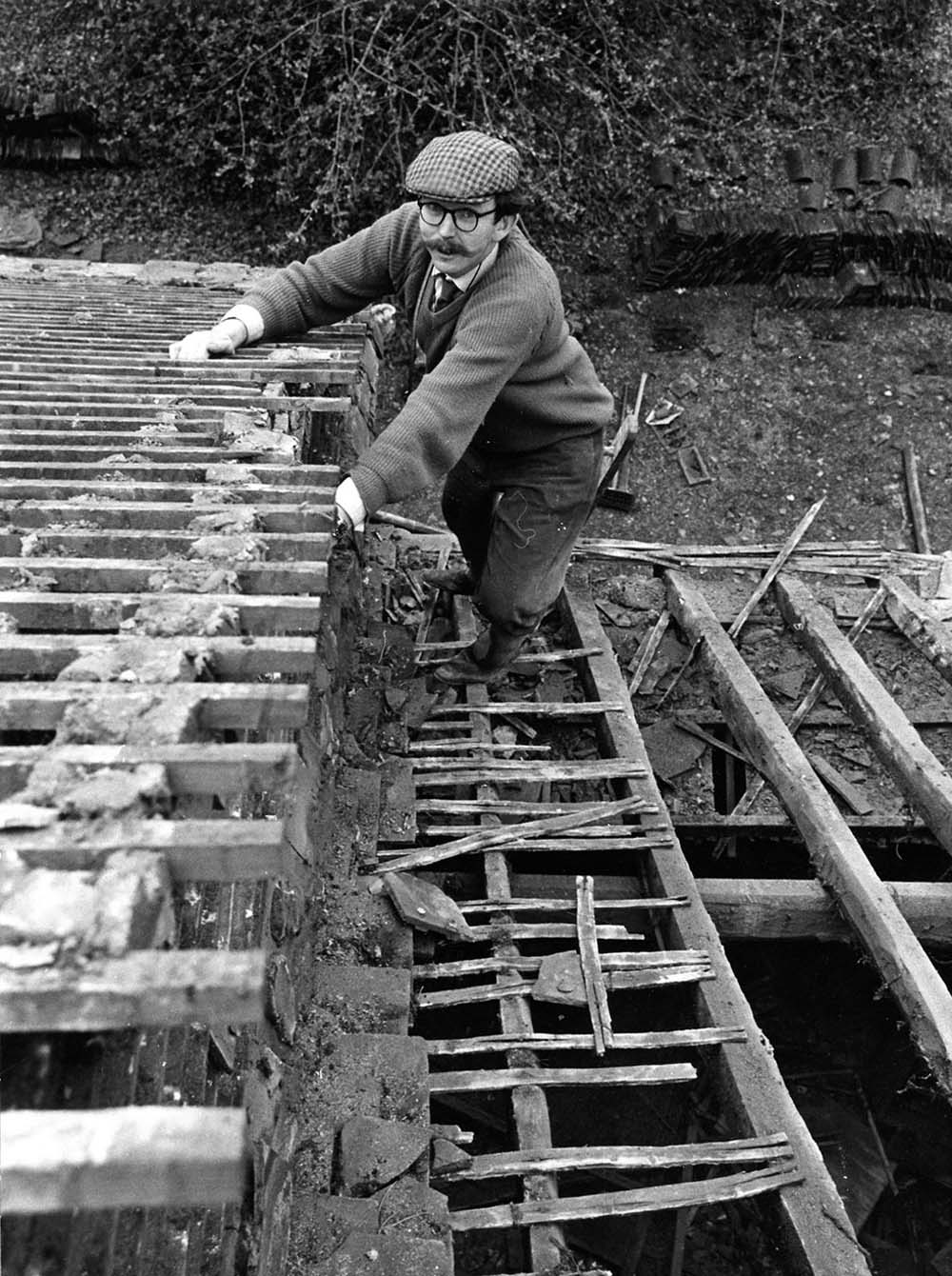 What he found inside was wonderful. It was like a time capsule – the pottery had been shut down very abruptly and inside there were still pots and tiles lying around everywhere and various things in cupboards like labels and books that nobody seemed to have taken any notice of for 20 or 30 years.

In our picture archive we have some wonderful photos of him as he worked to save the contents of the old pottery – it was documented very well by photography. So as well as incredible interior scenes, crammed full of pots, there are pictures of him smiling for the camera as he straddles the exposed roof timbers, so somebody else must have been with him to take these photos, as in those days I presume you couldn’t take a selfie as you can today.

Yet Goolden remains a mystery – and there’s been very little written about him personally, which I find very strange. 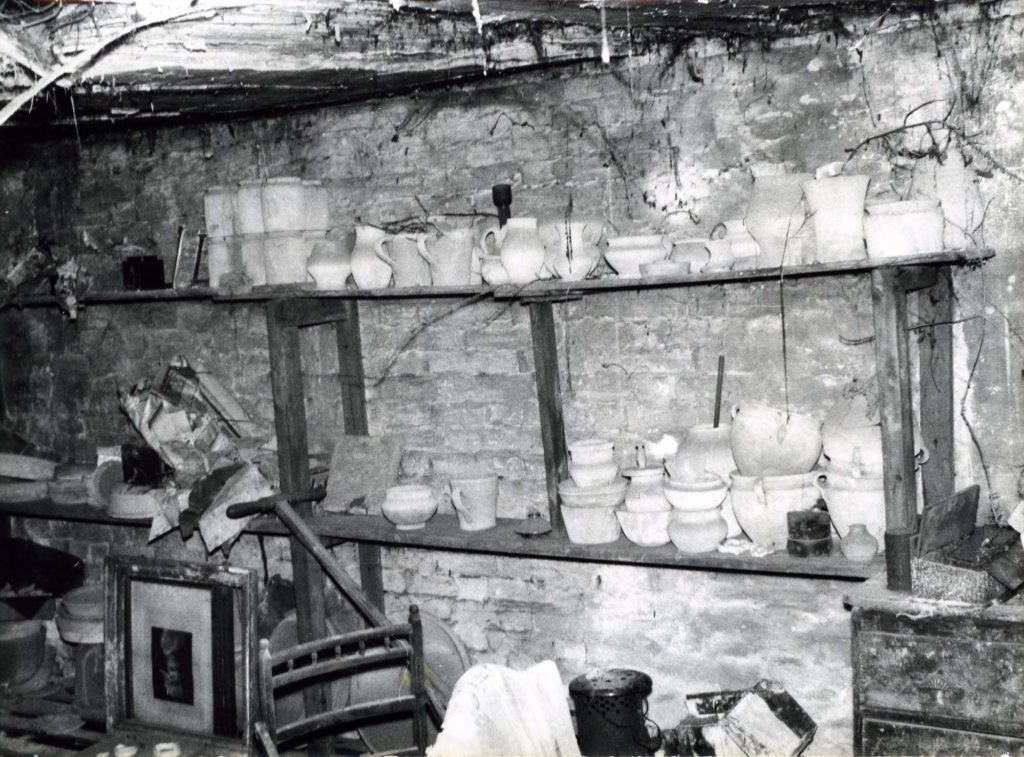 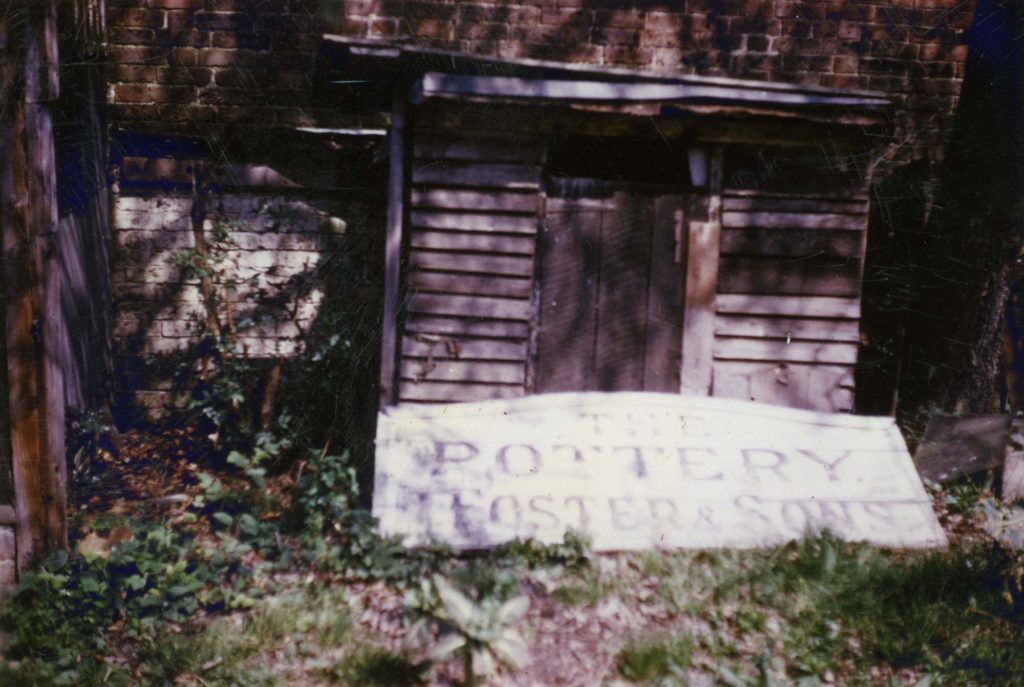 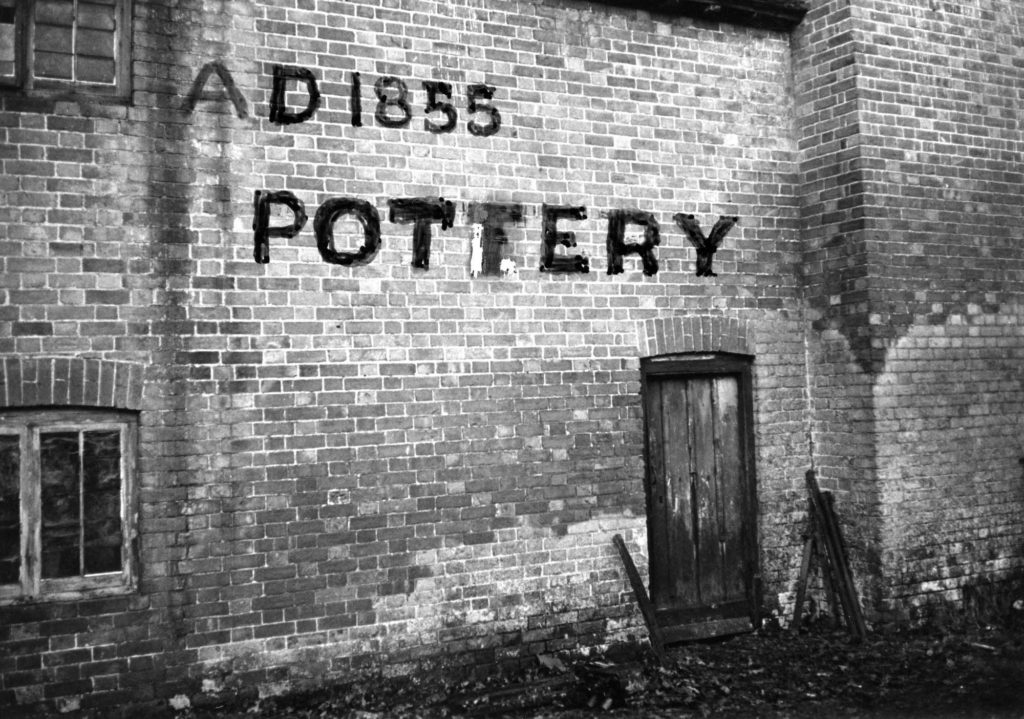 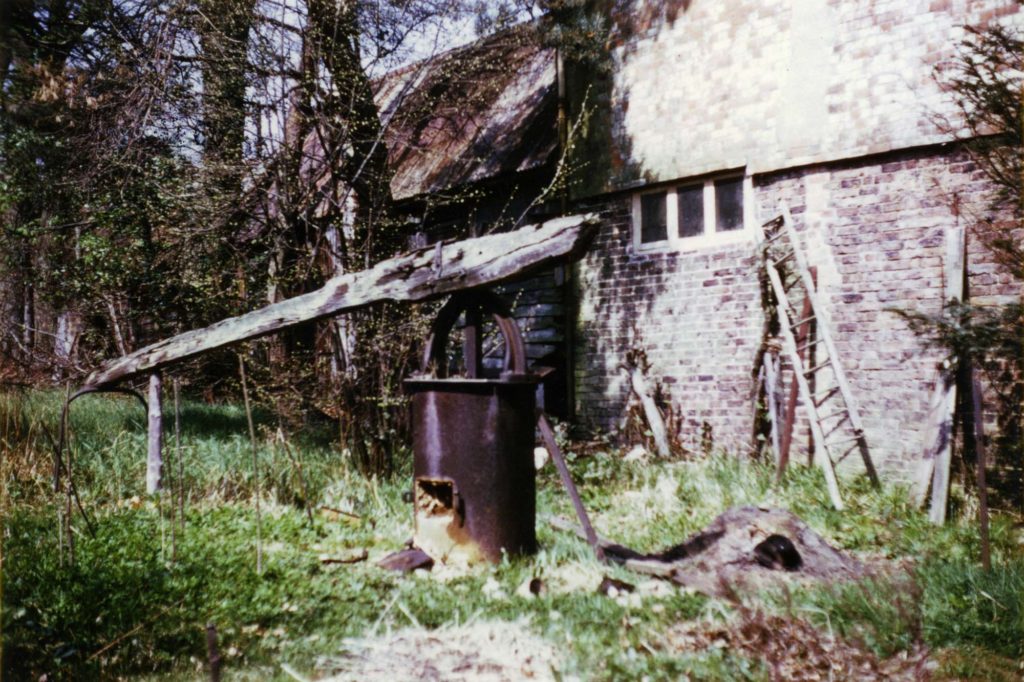 Thanks to him I’d say we have about 200 pieces from the East Grinstead Pottery in the collection – and of course you can still see a lot of the finials and the tiles on the older buildings around the town. There’s a particularly nice wyvern on the top of one of the buildings in the London Road and if you walk around the older part of town, a lot of the buildings are decorated with the tiles they made and they are quite decorative.

The pottery in East Grinstead was established in 1855 by somebody called George Lynn and then the Foster family took it over in 1875. There is a flask in the V&A which is marked on the bottom ‘TH23 1865, EG/HFFoster’ so we think Foster was an employee of Lynn and took over the business. It was with the Foster family until it closed in 1942.

In its heyday it employed a lot of people producing mainly domestic and functional pottery – everything from finials and tiles and fancy things for buildings, to bread and butter things like chicken feeders, dog dishes, plant pots and garden ornaments.

Apparently they designed things according to their customers’ requests, so if someone wanted something with a special rim or decoration they would turn it out for them.

But the pottery closed during the war in 1942 because the kiln fire couldn’t be damped down hard enough to make it undetectable from the air – they were worried that it was going to be a target for enemy bombers. After the war nobody seemed to pick it up again and it fell into disrepair, becoming more derelict until it was eventually sold as a building site. It’s around this time that Goolden started his investigations. 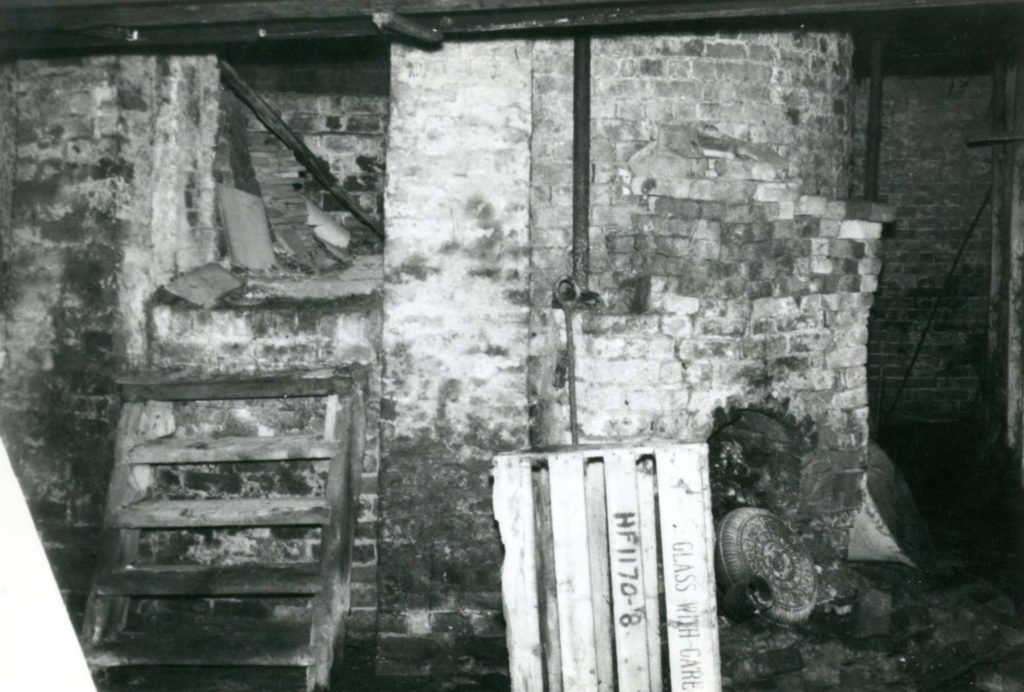 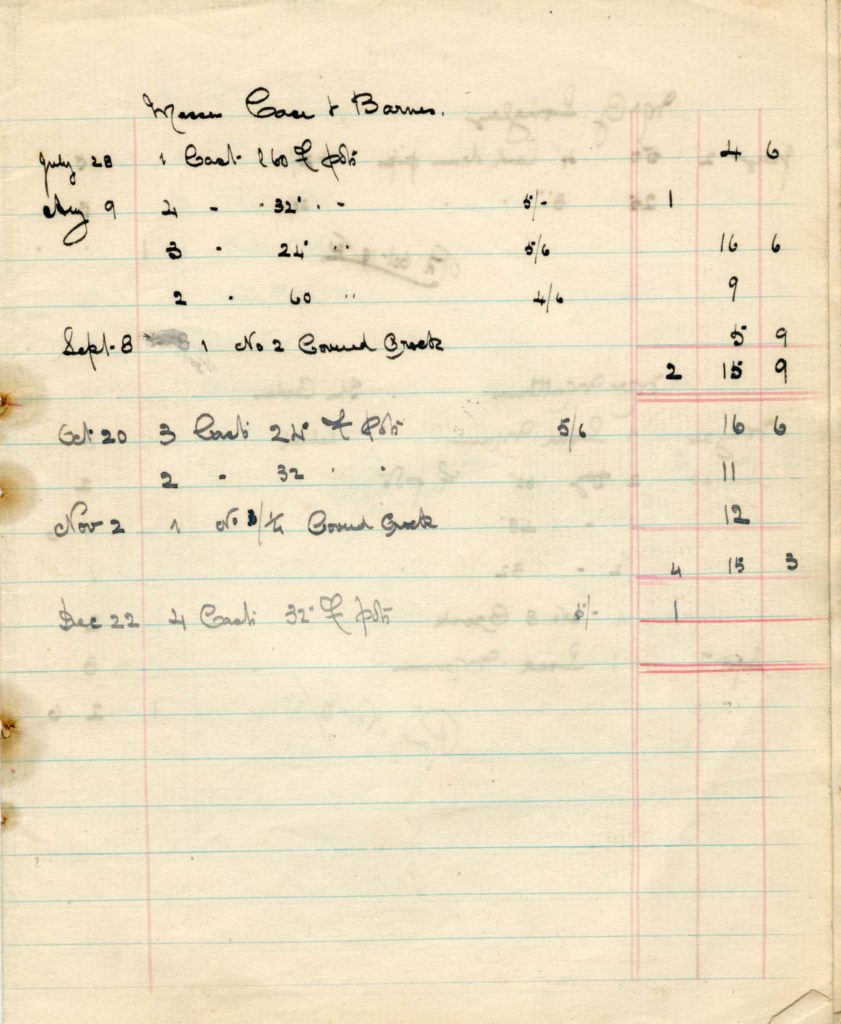 A page from an old ledger rescued from inside the building. Courtesy East Grinstead Museum 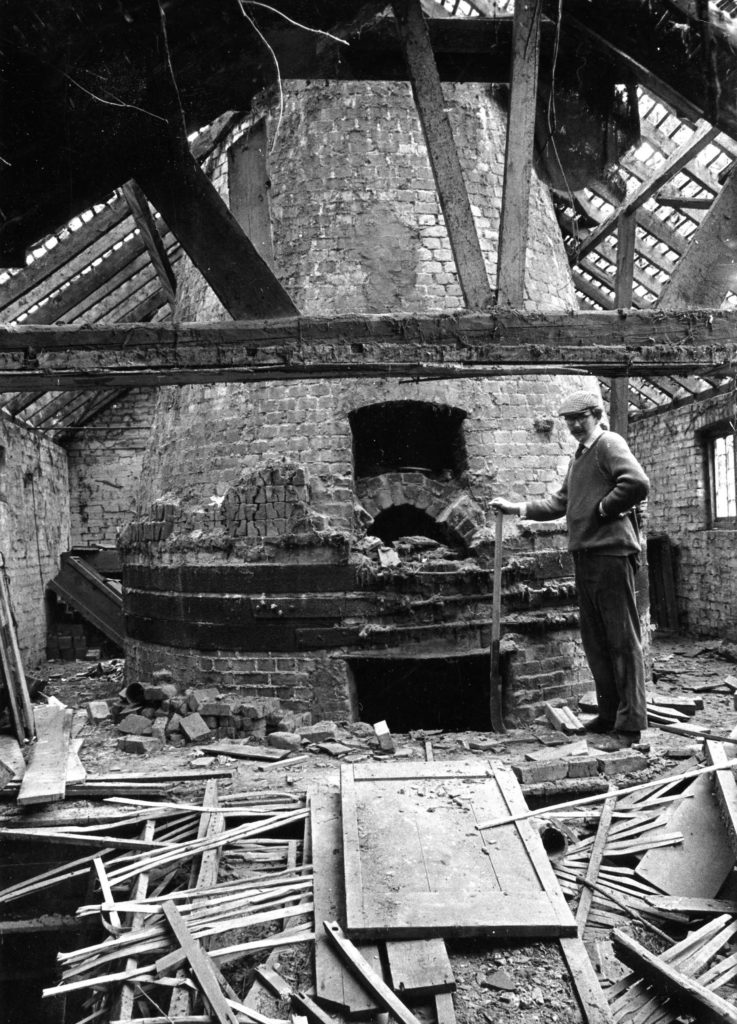 We have found out that he died in March 1981, but there are two versions of his birth date – 21st May 1939 and 21st April 1939, which means he wasn’t very old when he died. Yet the people who were likely to have known him personally are very thin on the ground now.

I did contact somebody who must be coming up to 90, who used to work in the auctioneers here, and although she was very knowledgeable about local people, she couldn’t remember much about him, beyond that he was rather an eccentric character – that’s about all she could say.

“Nobody seems to know anything about him personally.”

We have pictures of him making cheese at a Rudolph Steiner school in East Grinstead, but nobody seems to know whether he was a teacher there or if he just went in and did crafts lessons. It really is quite baffling.

We do know he had quite a big house in Park Road, which is one of the oldest parts of East Grinstead, and I think he had a large garden – which he would certainly have needed just to keep the many objects he rescued from the pottery. He obviously had a great interest in history and he belonged to the East Grinstead Society, which was formed to save parts of the town that were being demolished – they eventually made part of it a conservation area so he was obviously passionate that sort of thing.

But nobody seems to know anything about him personally. 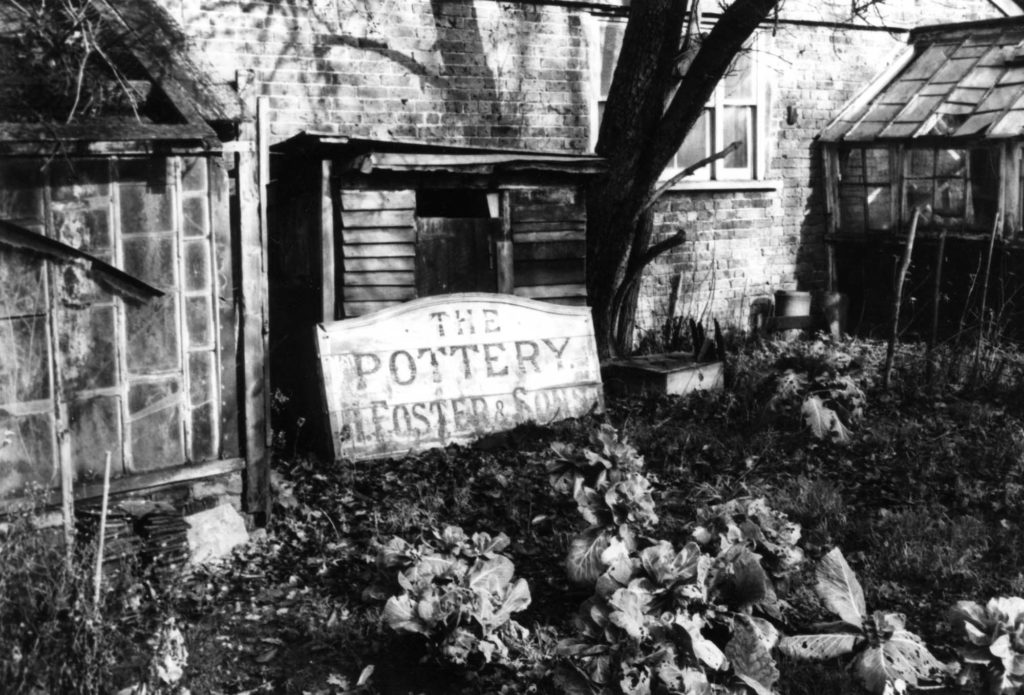 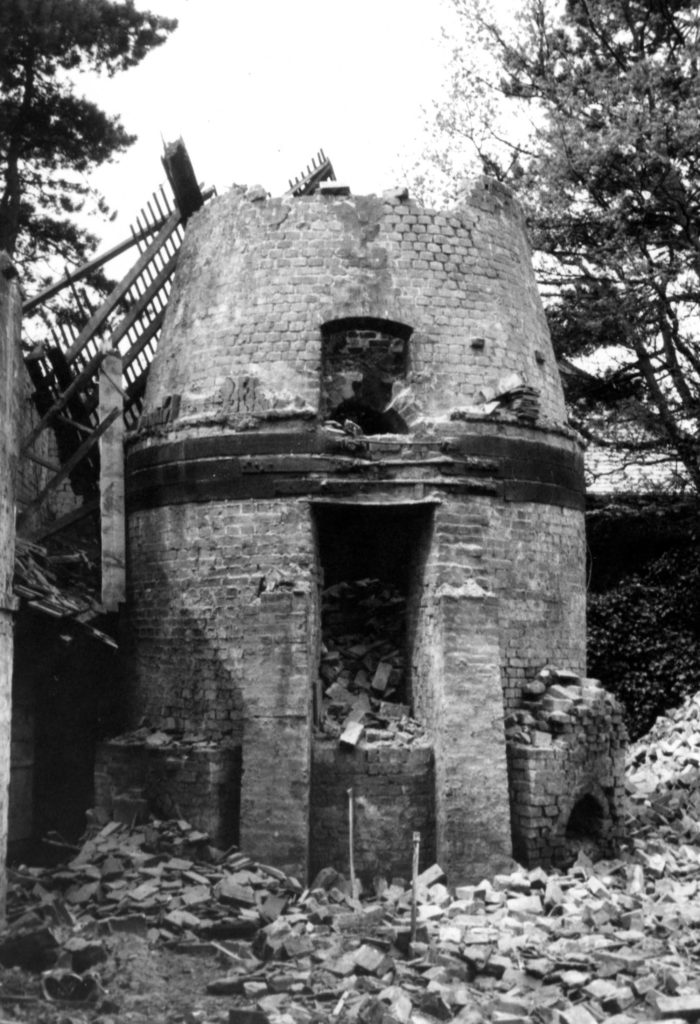 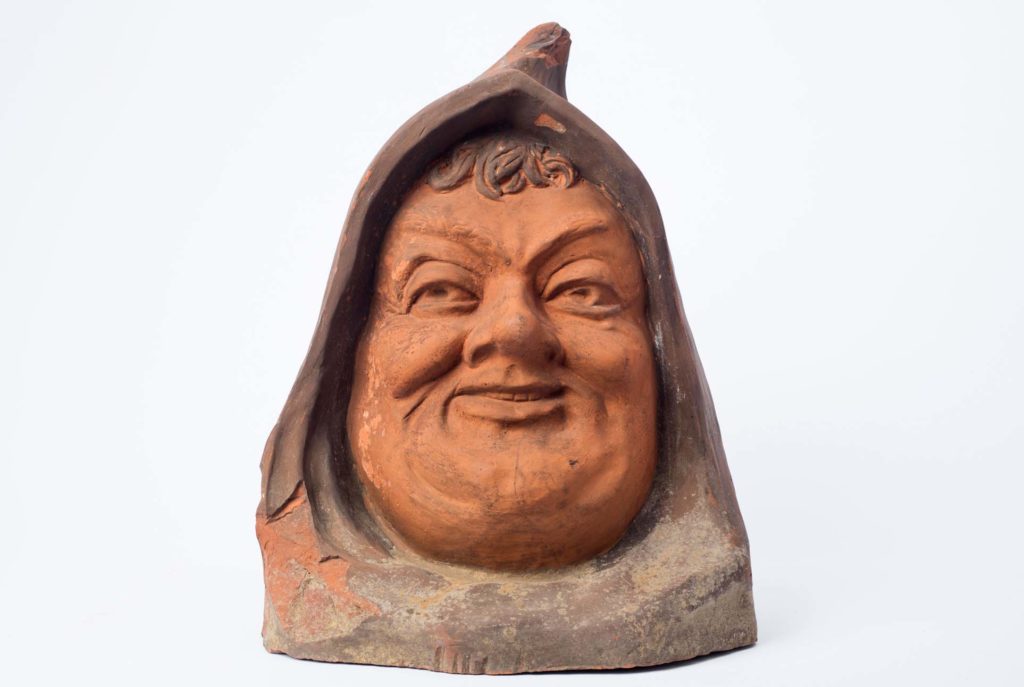 A monk’s head made by the East Grinstead Pottery

He loaned quite a lot of material to the museum in the early days and then when he died it all came to us. What’s interesting is how much he saved; he didn’t just take one sample or one example of one particular thing – he rescued the lot. We’ve got dozens of flower pots for example, so I think he just went in there and literally rescued everything he could lay his hands on.

Thanks to him we have a beautiful monk’s head in the collection – again its function is a mystery although I suspect it was made as a garden ornament and we have tobacco jars as well as the tiles, pots and feeders.

We also have the photos, including some early photography of workers quite possibly dating to the late Victorian period and early twentieth century, but again we don’t know who they are.

There are so many stories waiting to be discovered about the East Grinstead Pottery, but if it wasn’t for Charles W Goolden we wouldn’t know very much about it at all.

If you have any information about the East Grinstead Pottery or Charles W Goolden contact the museum at info@eastgrinsteadmuseum.org.uk

Interesting and varied displays trace the history of the town and surrounding area. Artefacts and memorabilia are interspersed with interactive touch screens and film. East Grinstead's association with WW2 Guinea Pig club and Sir Archibald McIndoe's pioneering work in plastic surgery is commemorated. The Museum's photographic collection, one of the…