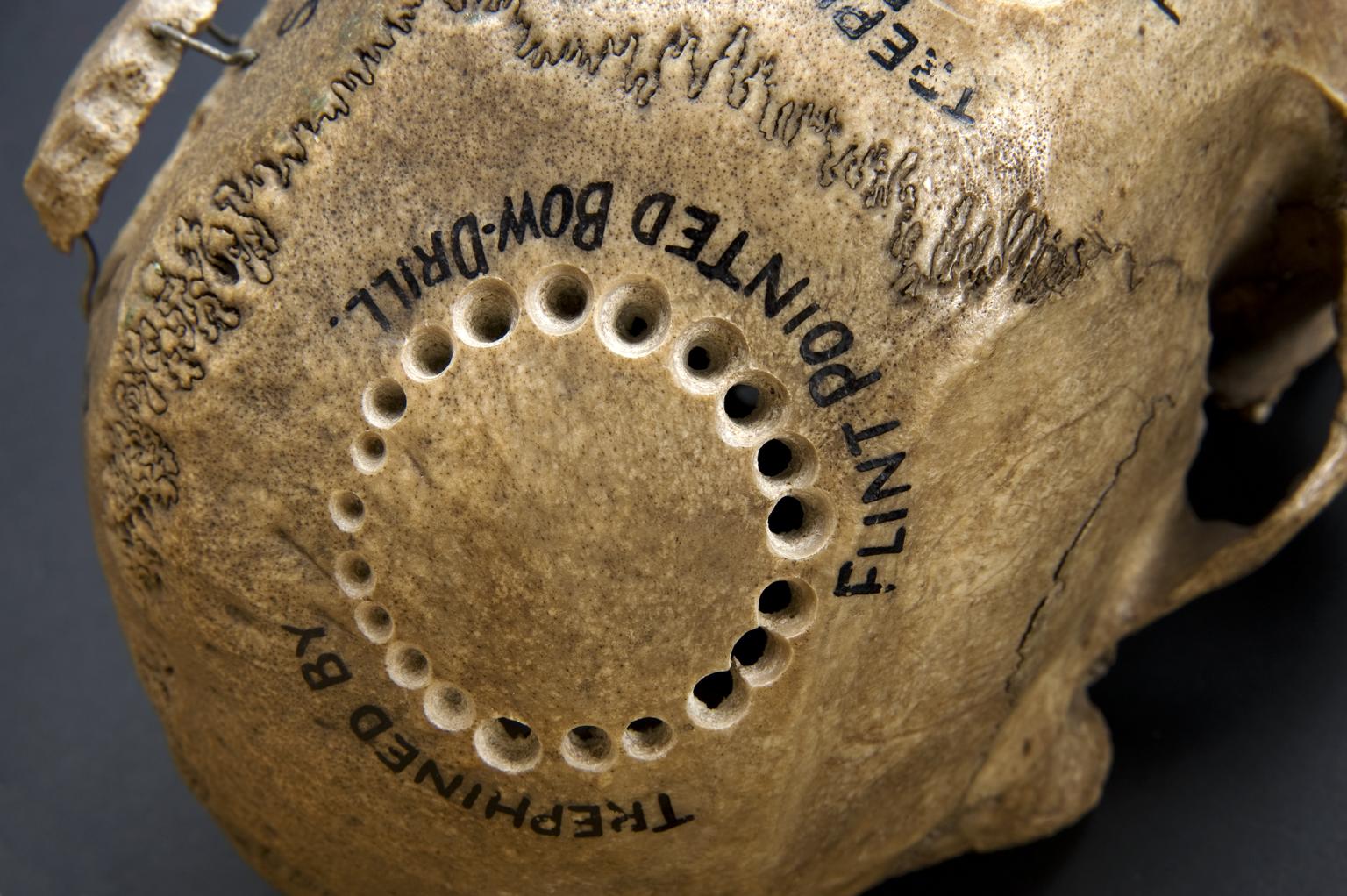 Archaeologists might not be able to agree on the reason why our ancestors made holes in their skulls, but what they can agree on is that humans on every continent have done it at some point in history, suggesting the seemingly-bizarre practice developed independently across multiple civilizations.

To date, thousands of skulls with trepanation holes have been unearthed at archaeological sites around the world.

Trepanation, also known as trepanning, trephining or trephination, involves creating a hole in the skull of a living person to expose the brain’s outer membrane and allowing the skin to heal over it.

The earliest skull bearing marks of trepanation dates to approximately 7,000 years ago, making it the oldest surgical procedure for which we have evidence. 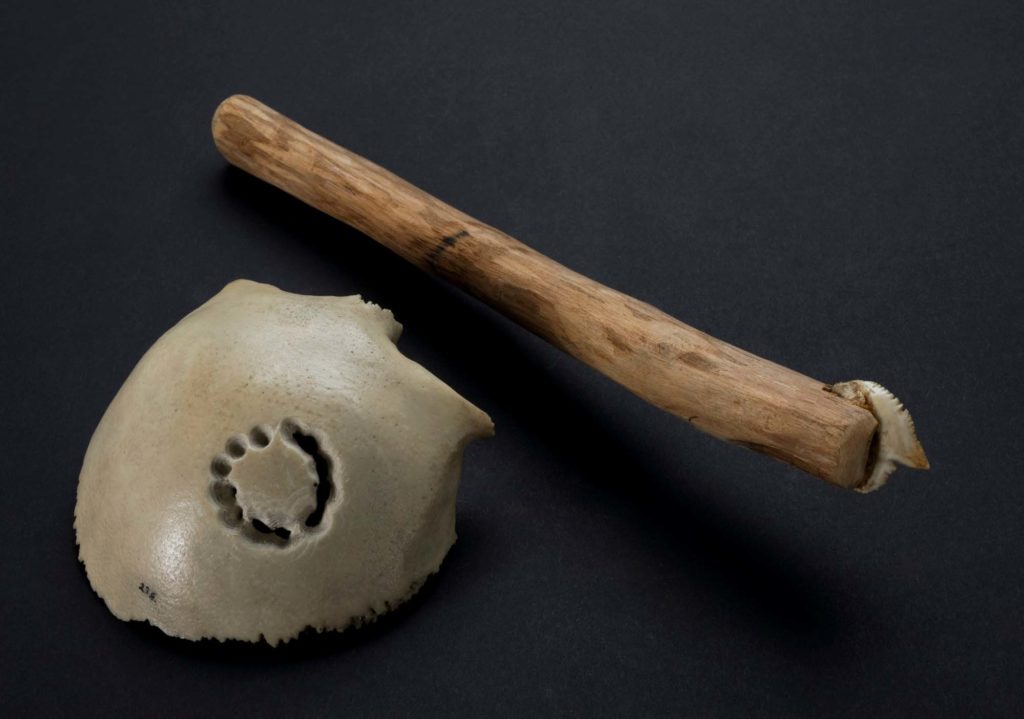 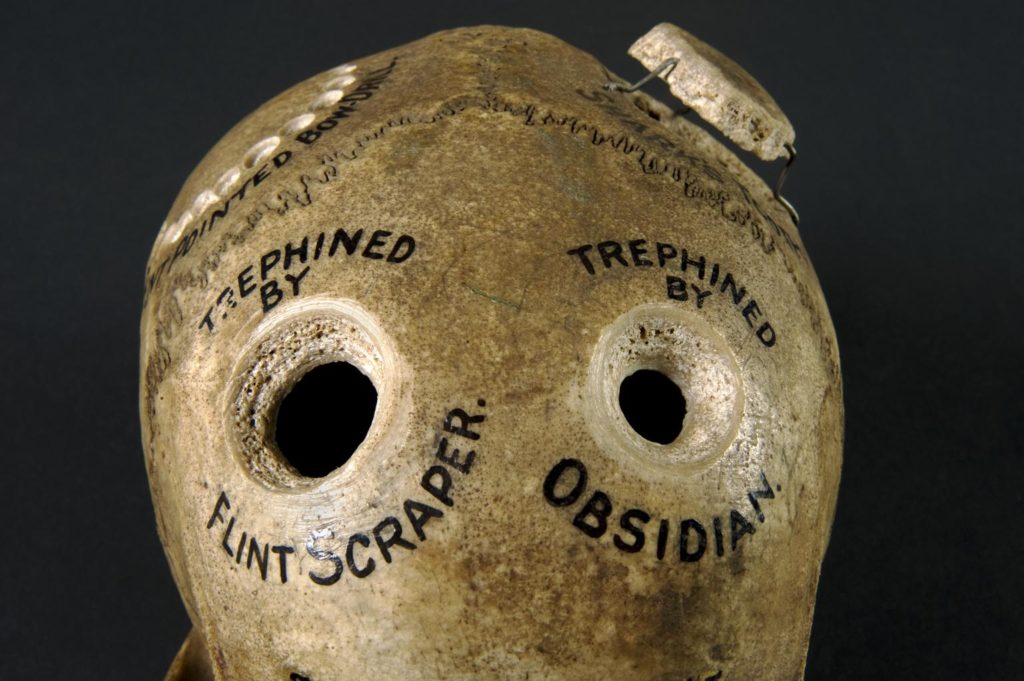 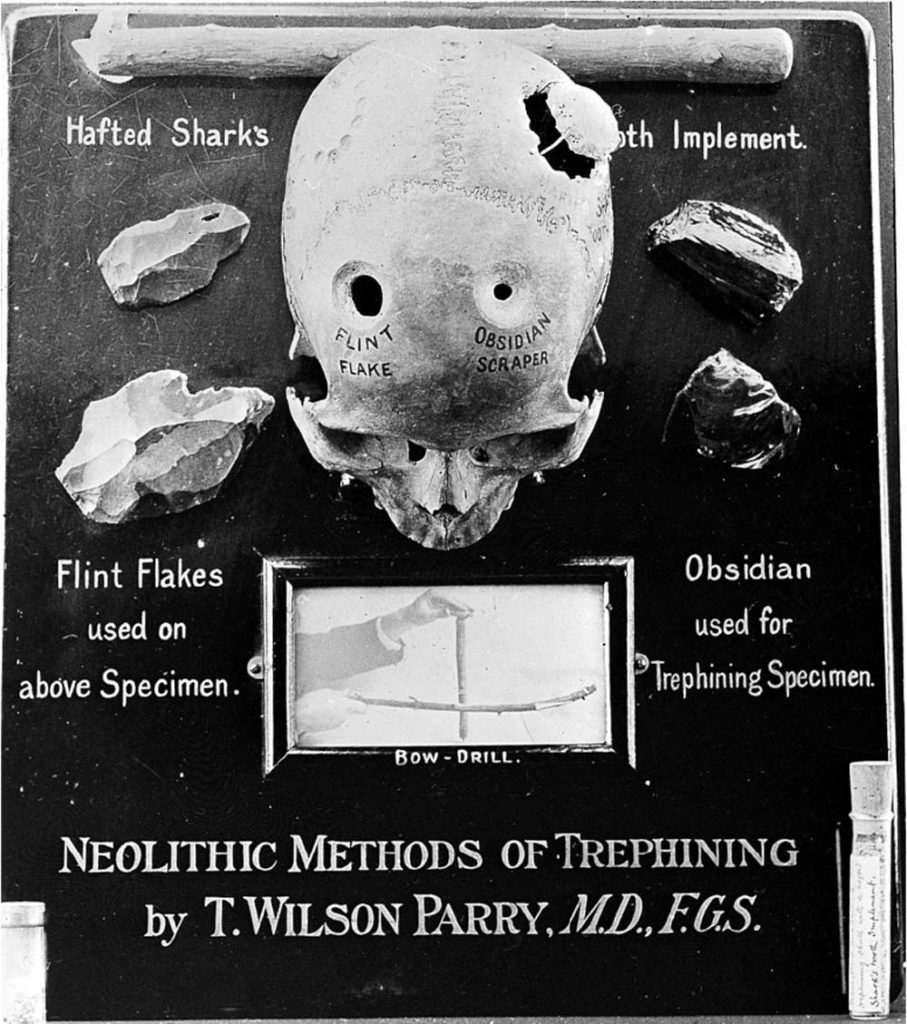 Throughout the early 20th century he conducted his own experiments into what implements Neolithic tribes would have employed, using whatever skulls he could lay his hands on and making his own equipment out of flint, obsidian, glass, shell and shark teeth – the results of some of which are pictured.

In 1918 he even published a humorous poem about the prehistoric custom, titled Surgery of the Stone Age: A Ballad of Neolithic Times, describing the trepanation of an epileptic man.

Parry identified four main methods of ancient trepanation: scraping; boring or drilling; the ‘push-plough’ method which involves scraping a circular furrow until you can prise a piece of skull out; and the fourth and most difficult practice in his opinion, sawing in straight lines to lift out a piece of skull, which was common in ancient Peru.

If all of this is making you feel queasy then you might ask why anyone would undergo trepanation.

Anthropological evidence from cultures which practiced the tradition up until the 19th century (such as parts of Africa and Polynesia) suggests it was used to treat an array of neurological and physiological conditions, from the aforementioned epilepsy to migraines and skull fractures. 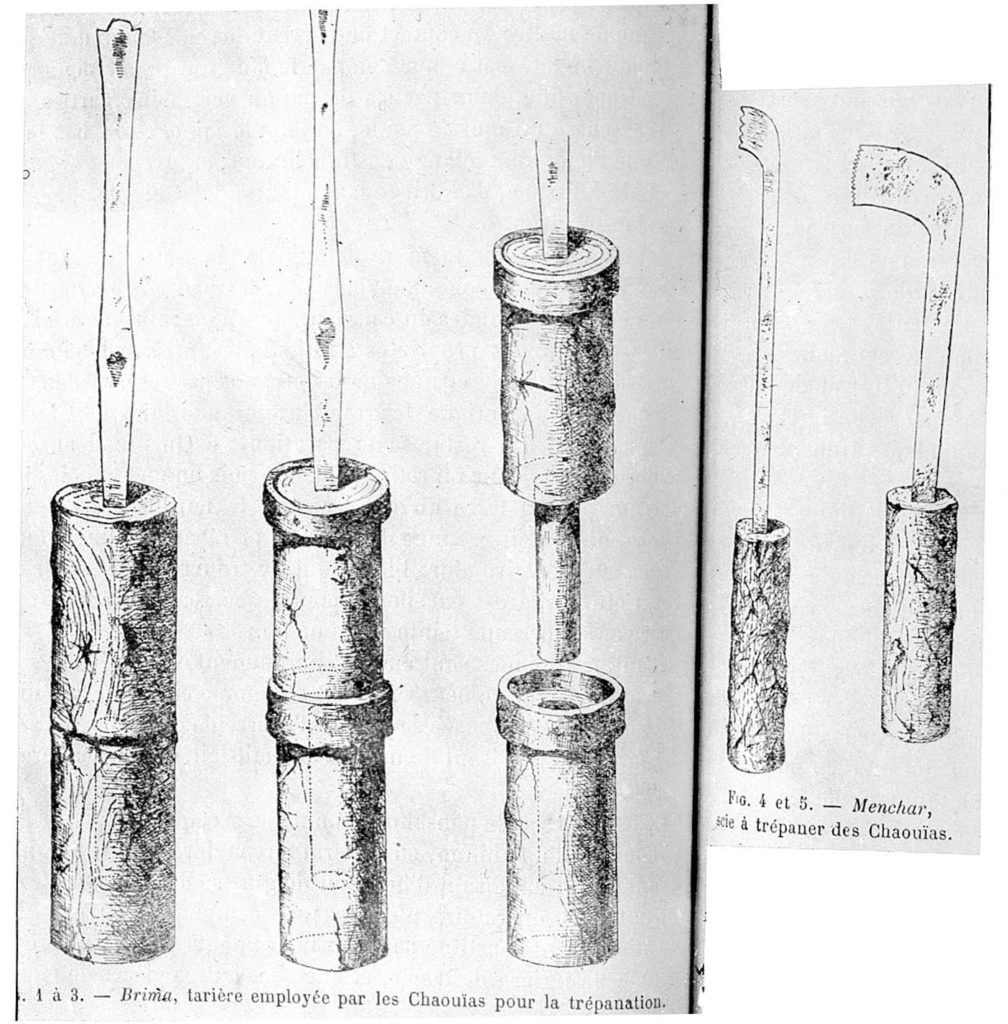 ‘Primitive surgical instruments used by the Chaoulas, from the slide collection of T. Wilson Parry, No. 3978’ . Credit: Wellcome Collection. CC BY 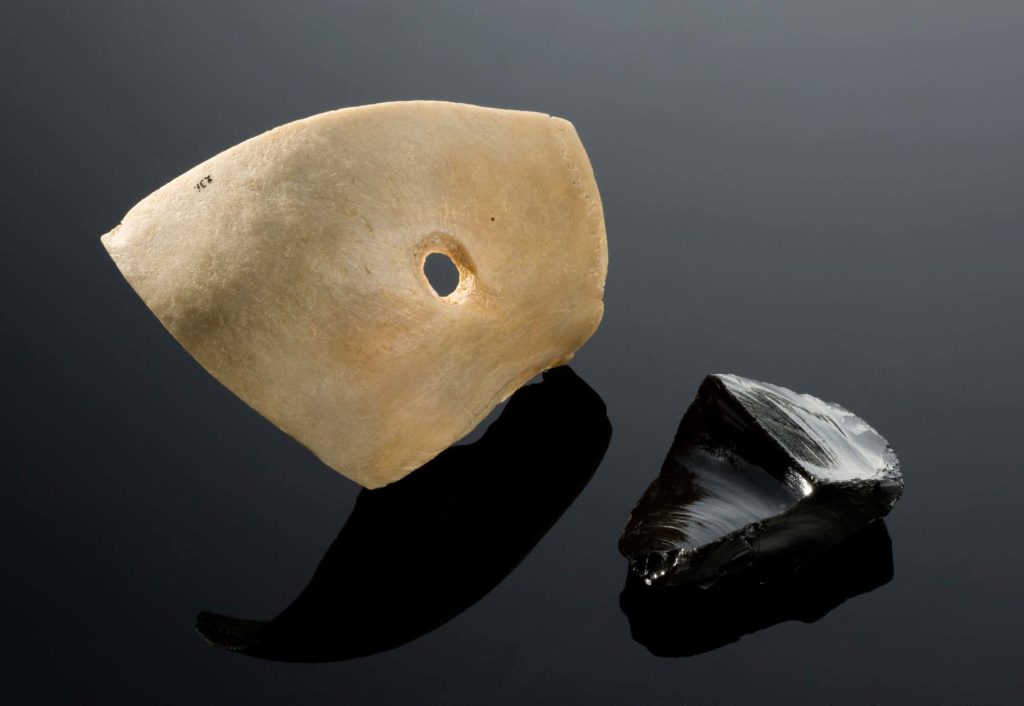 It is however, impossible to say for certain why ancient peoples would have performed this procedure, which – from the evidence of healing found on unearthed trepanned skulls – had a fairly high survival rate.

Some archaeologists believe it may have been used in rituals to allow the passage of spirits into or out of the body, perhaps as a cure for demonic possession or as part of an initiation rite, and it’s this supposed effect of engendering an altered state that more recent trepanners (yes, really) were searching for.

As unlikely as it seems, trepanation enjoyed a brief modern-day renaissance in the 1960s and early 70s when advocates like Bart Huges, Joey Mellen and Amanda Feilding championed it as a means to heighten consciousness.

The theory went that it increased blood flow in the cranium and allowed more room for the brain to swell and subside with the heartbeat, the way it does in infants before their skull bones knit together. This, they claimed, returned you to a state of childlike perception and higher consciousness.

While their hypothesis is totally unsubstantiated by science, recent research by Russian neurophysiologist Yuri Moskalenko (in collaboration with Feilding’s Beckley Foundation) has shown trepanation could potentially have a positive effect on patients with Alzheimer’s by increasing blood flow to the brain.

As for Parry’s investigations, he recorded that the average time it took him to perform a trepanation by the scraping method on a fresh adult skull was half an hour, although one record shows he managed it in a mere 13 and a half minutes using a “large and robust shell.”

And after all his experimentation he eventually concluded his favourite tool for boring holes into skulls was his hafted shark’s tooth – just the right combination of sharpness and strength to pierce a human head.

Explore the collections of the Science Museum at collection.sciencemuseum.org.uk

A free museum and library exploring health and human experience. Located at 183 Euston Road, London, it explores the connections between medicine, life and art in the past, present and future. The venue offers visitors contemporary and historic exhibitions and collections, lively public events, the world-renowned Wellcome Library, a café,…