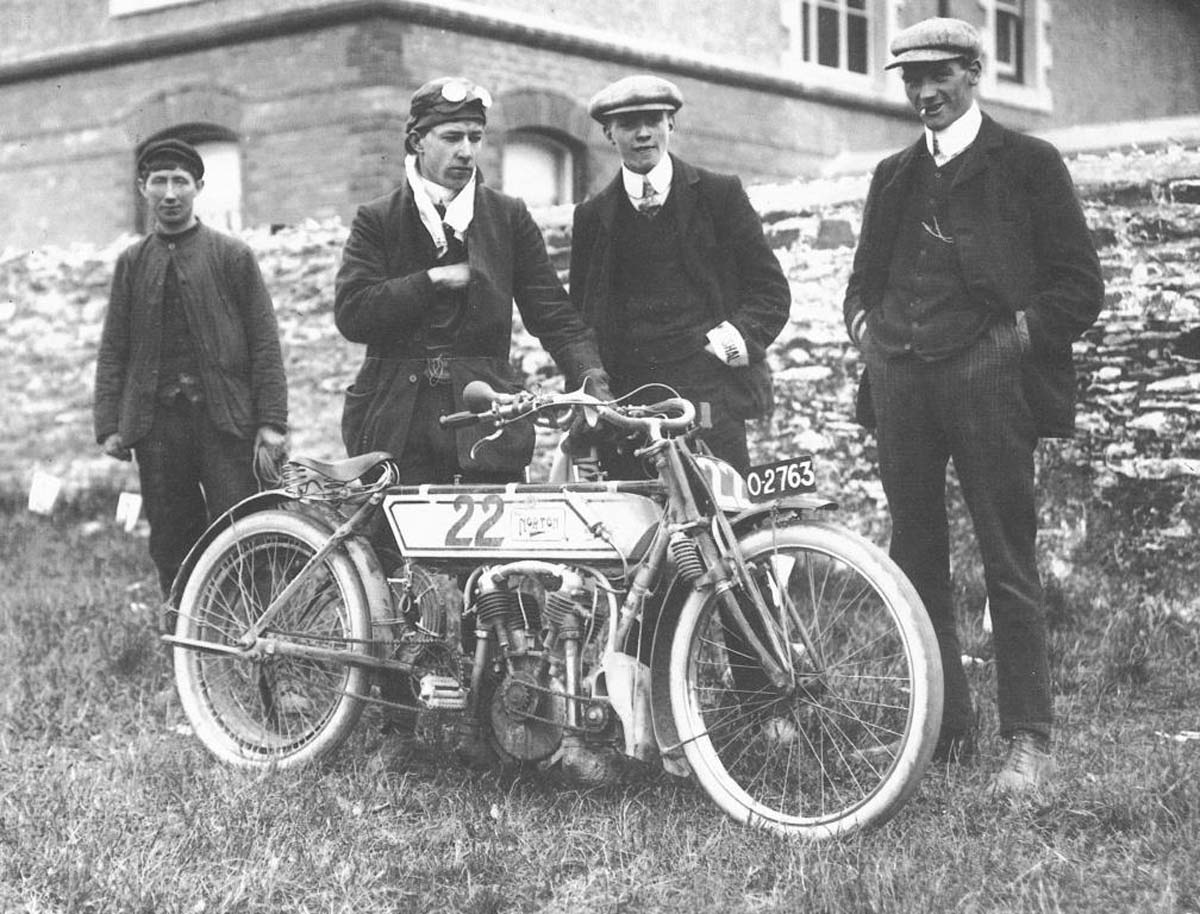 Manx National Heritage has secured an important new object for the national collections, the silver hip flask awarded to Rem Fowler for his win in the first ever TT race in 1907

This is Harry Rembrandt Fowler (1882-1963), popularly known as ‘Rem’, alongside his famous Peugeot-powered Norton motorbike, upon which he won the first ever Isle of Man Tourist Trophy (TT) on May 28, 1907.

In those days TT racers pretty much wore their everyday clothes – in this case a suit jacket held together with a piece of string – with the leather gauntlets, hat and a pair of goggles seemingly the only concession to the rigours of motorcycle racing. Nevertheless, machines and outfits like these were just enough to see the 27 competitors of 1907 through ten bone-shaking laps of the 15-mile circuit across the Isle of Man’s public roads.

In 1911 this ‘short’ circuit was replaced by the 37½-mile Mountain Course and a few years later the course changed again to follow the route which still forms the 37¾-mile circuit for today’s races.

But in 1907 the roads of the TT circuit were often little more than rutted cart tracks, meaning that Rem and his fellow competitors faced a trial of skill, reliability, speed and fuel economy that made the TT a testing ground for road-going motorcycles – and their riders. 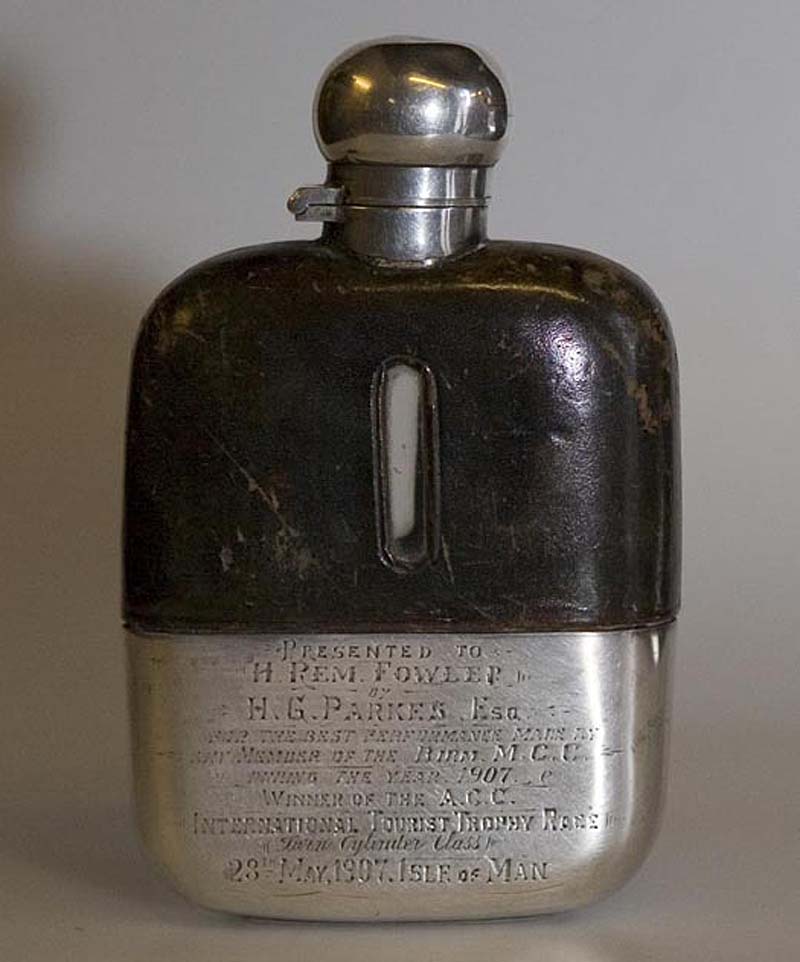 Rem stopped ten times during the race. He had to change an inner tube and two spark plugs; he fell off twice then wired up a mudguard and also wired up the advance spark lever. Then he dropped his pump and had to pick it up. He also stopped twice to take up slack in his drive belt.

Despite all of this he won in a time of 4 hours 21 minutes 52 seconds, averaging 36.32 mph. For his daring exploits he was given an engraved silver hip flask.

“this engraved flask is the only known piece of material culture”

Rem remains a legendary figure among motorcycle fans and memorabilia relating to him and the first Isle of Man TT race are extremely rare. So when his winners hip flask came up at auction, Manx National Heritage moved heaven and earth to obtain it.

“There were no individual trophies, no medals awarded and no specialist racing equipment,” says Matthew Richardson, MNH’s Curator for Social History, of the very first TT race. “Apart from the St Mars Trophy, which is still awarded for the Senior TT, this engraved flask is the only known piece of material culture.” 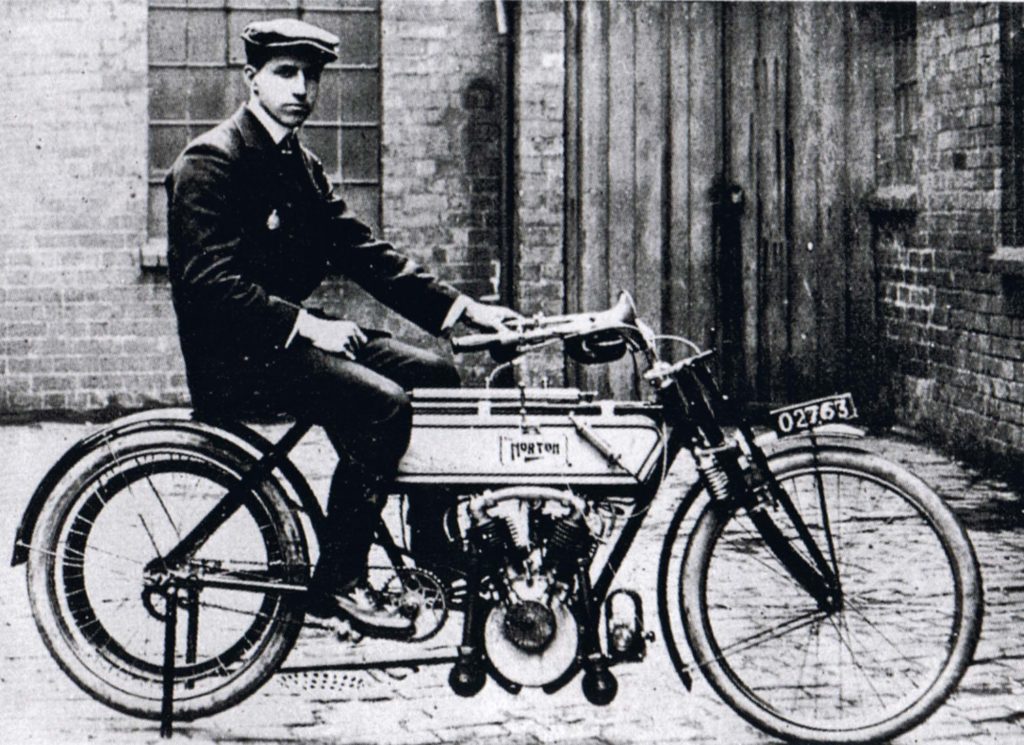 Rem Fowler on the Norton powered by a Peugeot engine that won the 1907 TT.

Unsurprisingly the sale of the hip flask generated a great deal of interest amongst collectors both in the UK in America and MNH curators were worried that it might leave the British Isles never to be seen by the public again.

The flask had previously been loaned to Manx National Heritage in 2007, when it was displayed as part of an exhibition called Staying the Course, celebrating 100 years of the TT. As well as giving curators a chance to examine it closely, it was one of the star objects of the exhibition and featured as an illustration in the souvenir catalogue.

“A friend of mine fetched me a glassful of neat brandy. This had the desired effect and I set off full of hope and Dutch courage”

But apart from its rarity, the significance of the object is enhanced by Fowler’s memoir of the first TT race, of which he writes:

“I was in no fit state to ride for I was in a very run down and nervous condition… A friend of mine fetched me a glassful of neat brandy tempered with a little milk. This had the desired effect and I set off full of hope and Dutch courage”.

The Museum has now added the flask to a growing collection of TT memorabilia that includes archive imagery, film and photographs, news articles and objects from previous race years including racing gear and trophies. 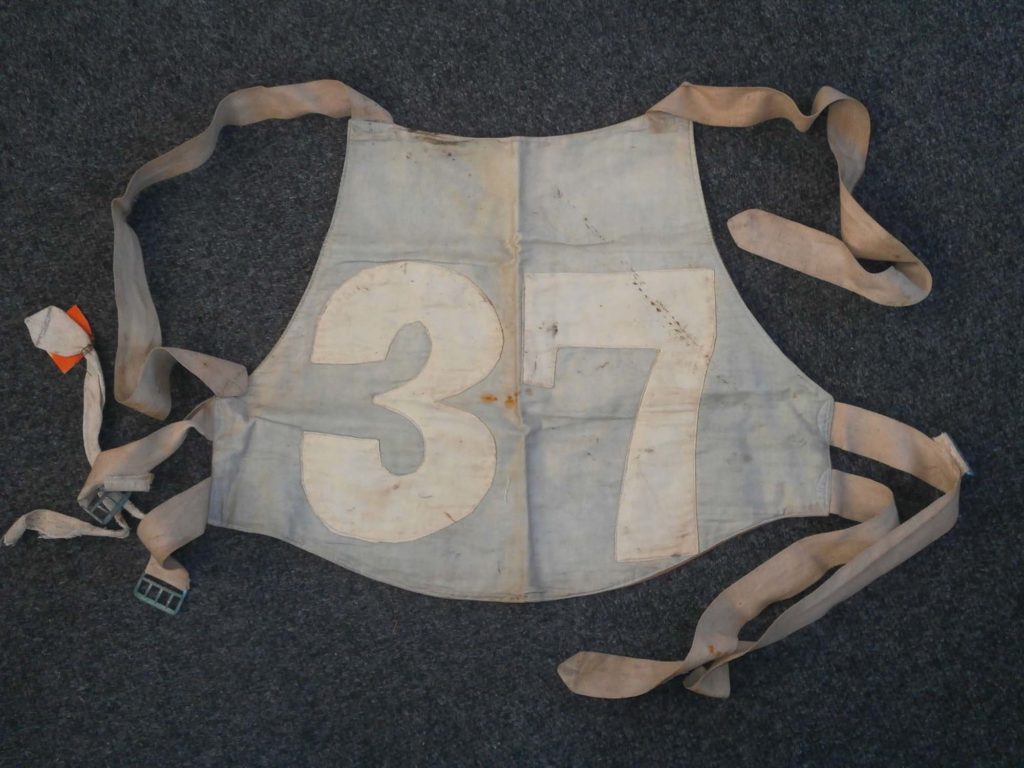 Back bib worn at the 1914 TT by Laurence Boston. He served in the army in WW1, and survived Gallipoli only to be killed in a motorcycle accident at Aldershot. Courtesy Manx National Heritage 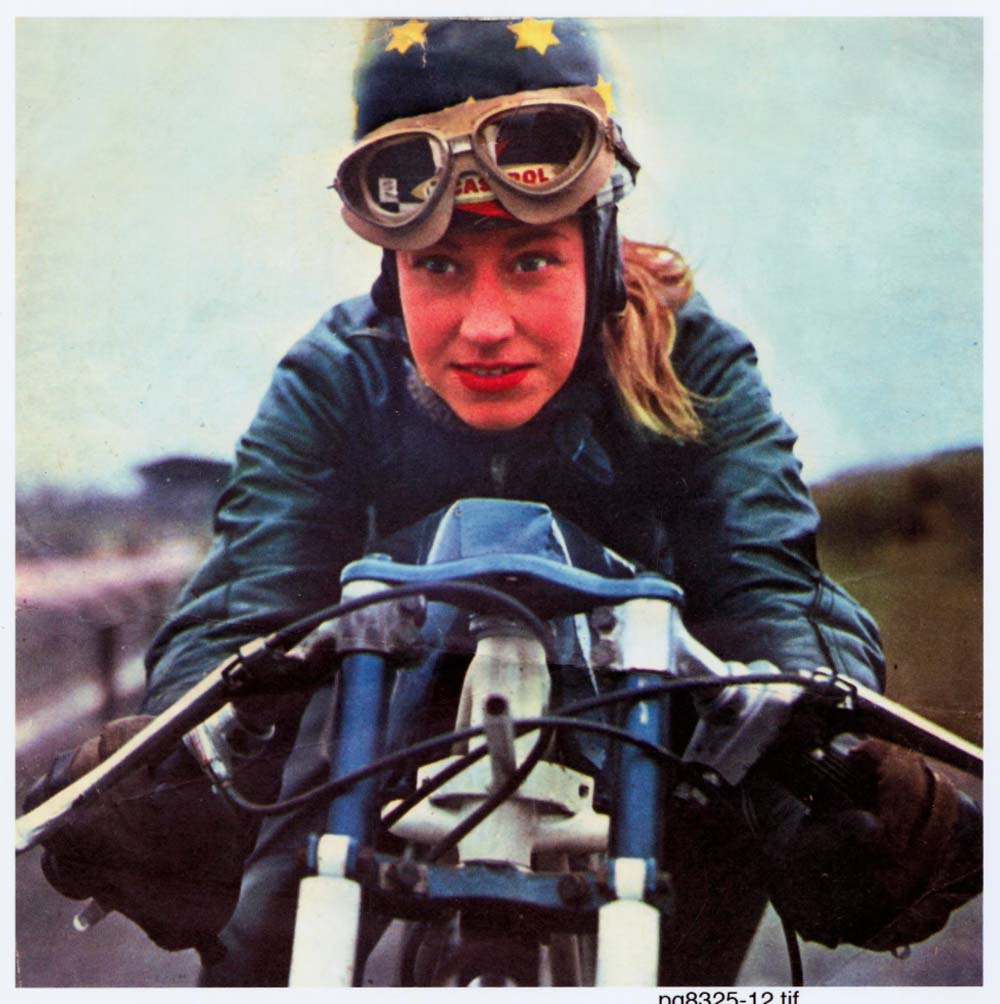 Beryl Swain – Beryl was the first woman to compete as a solo rider at the TT. After her 1962 appearance her racing licence was revoked by the FIM. She later became a branch personnel manager for J.Sainsbury. She died in 2007 aged 71. Courtesy Manx National Heritage 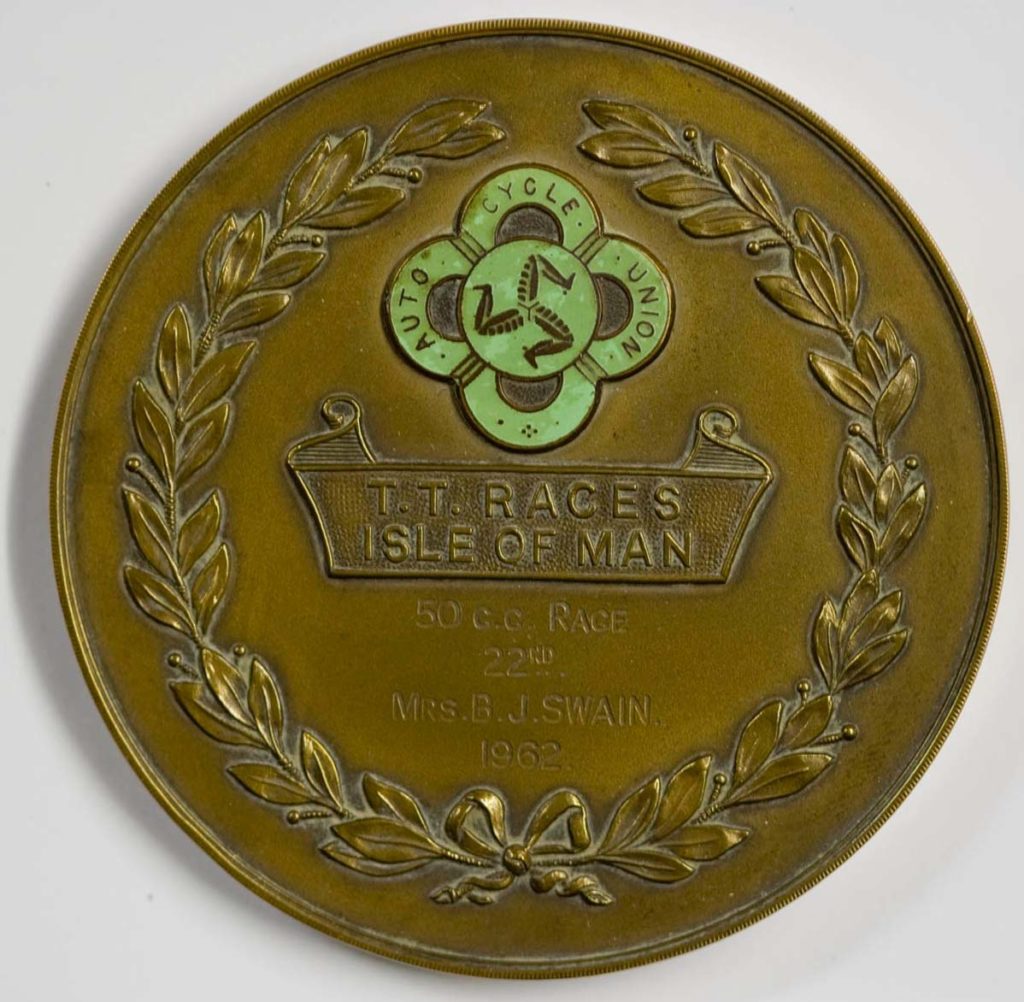 Among them are the leathers, helmet and 1962 finisher’s medal awarded to the first woman to race the TT, Beryl Swain, who competed in the 50cc race in 1962. Swain’s motorbike-racing exploits were however short-lived as the Federation Internationale de Motocyclism (FIM) withdrew her racing licence on the grounds that racing was unsuitable for women. She has however joined other great names like Carl Fogarty, the late Joey Dunlop and Giacomo Agostini in Manx National Heritage’s collection remembering the greats who raced the TT circuit.

Another early TT rider, Laurence Boston, served in the army during the First World War and survived Gallipoli only to be killed in a motorcycle accident at Aldershot.

Other stories that emerge from this varied holding include that of the paramilitary riders of the National Socialist Motorized Transport Corps sent by the Nazis to contest the 1939 TT and thus prove Aryan superiority. That year the Senior race was won by the German Georg Meier, who became the first non British rider to win the race, on his supercharged BMW.

The TT races came about through a 1904 Isle of Man law that allowed roads to close for the Gordon Bennett car trials. Because laws about road closures and speed limits prevented a British motorcycle to race on roads in the UK, the Auto Cycle Club decided to organise a race on the Isle of Man in 1907.

It has grown over the years to become the most famous (and one of the most dangerous) motorcycling road race series in the world and thousands of enthusiasts come each year from across the globe to watch them.

MNH hope to showcase the flask and other new acquisitions in time for the 2019 TT. A new TT gallery at the Manx Museum is also in the early stages of development. 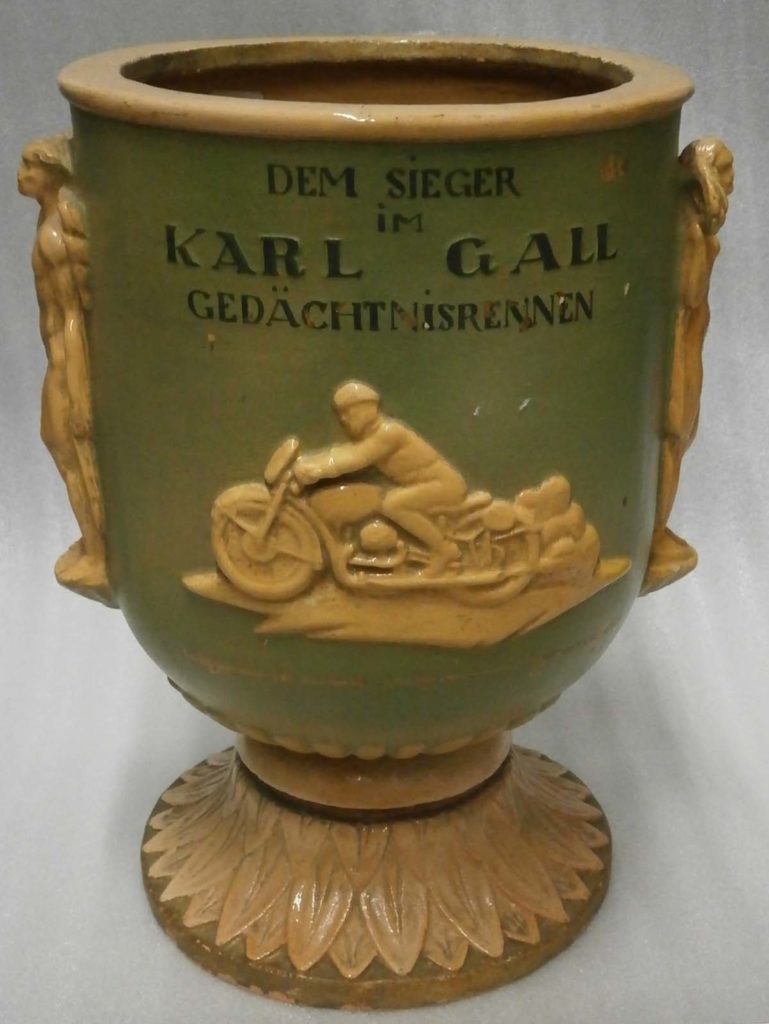 A memorial urn for Karl Gall, one of the paramilitary riders sent by the Nazis to contest the 1939 TT. Gall crashed during a practice lap and later died of his injuries and pneumonia. Courtesy Manx National Heritage

Manx National Heritage is keen to hear about significant items of Isle of Man TT heritage. If you know of any objects, stories or collections contact: Matthew Richardson, Curator of Social History on 01624 648053 or matthew.richardson@gov.im