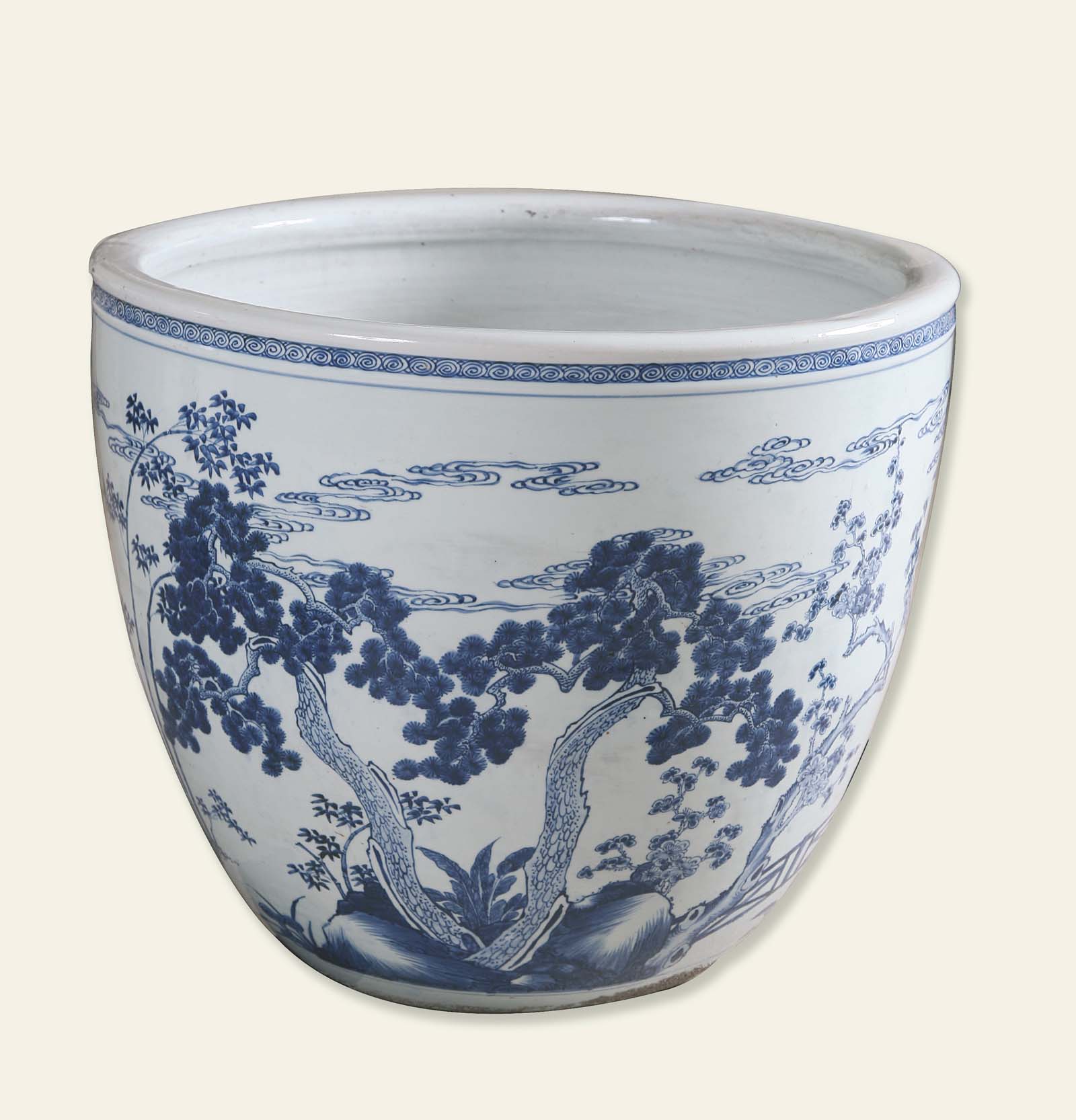 When Horace Walpole’s cat Selima drowned while trying to catch the goldfish he kept in one of his large antique Chinese ware bowls, it was of course a sad occurrence. But in the hands of a man whose skills and interests ranged from writing Gothic novels to antiquarian art and politics the poignant episode became something of a literary event.

Not content with burying Selima under a bush in the garden Walpole employed the skills of one of the foremost emerging poets of the day – Thomas Gray (he of the Elegy Written in a Country Churchyard) – to write an ode ruminating on the unfortunate feline’s demise.

The resulting Ode on the Death of a Favourite Cat Drowned in a Tub of Goldfishes was a mock-heroic affair, and published in a slim volume of Gray’s other works with tasteful engravings, and verse that was full of lofty classical allusions that tipped their hat to Homer or Virgil.

Now the surviving object behind this literary endeavour goes on display at Walpole’s sumptuously restored home, Strawberry Hill House in London’s Twickenham, when the 18th century Chinese porcelain vase in which the cat drowned, begins the house’s new series of Under the Spotlight displays showcasing interesting objects and their stories. 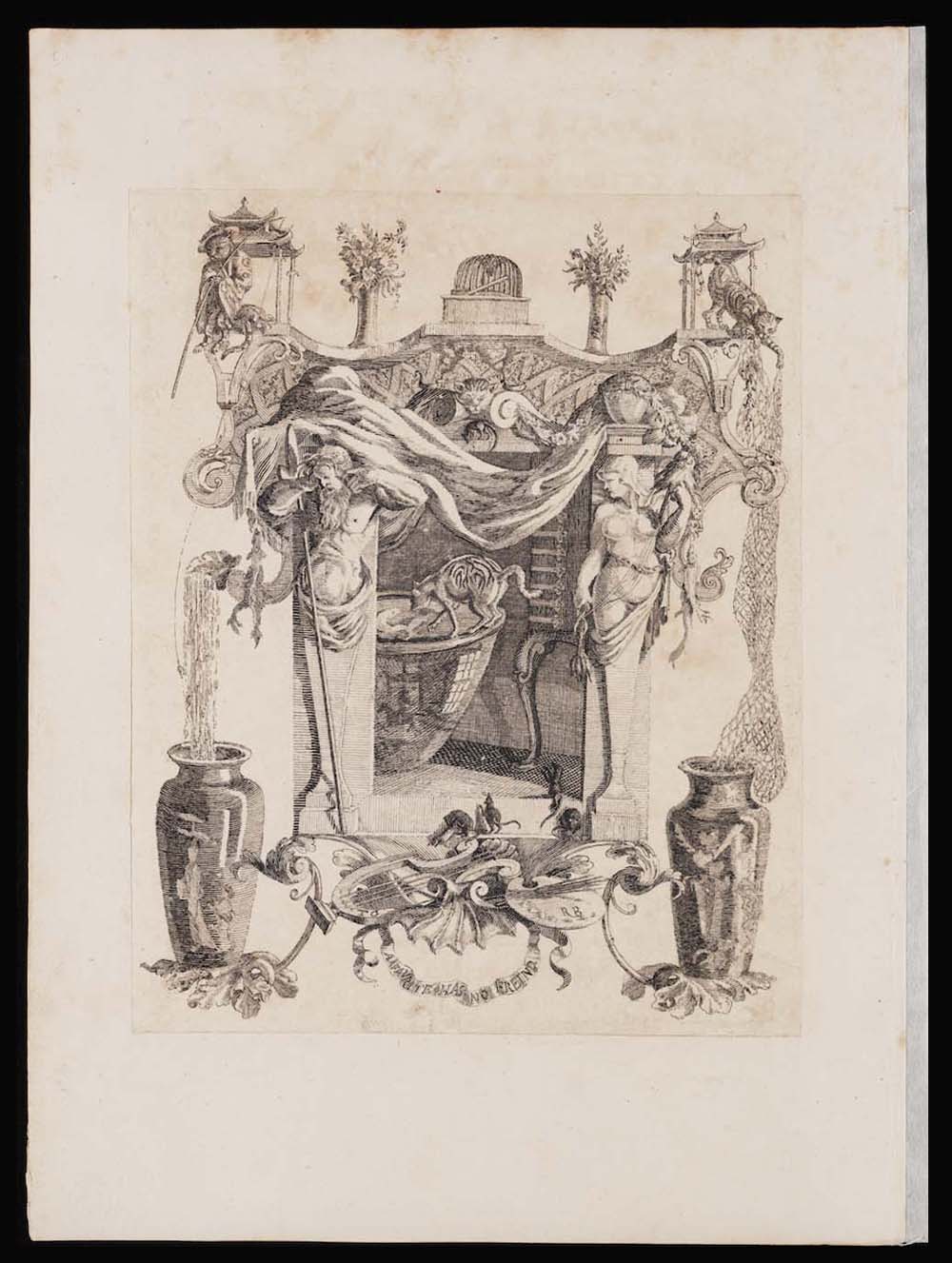 Frontispiece to ‘Ode on the Death of A Favourite Cat’ in Designs by Mr. R. Bentley, For Six Poems by Mr. T. Gray. Courtesy of The Lewis Walpole Library, Yale University. 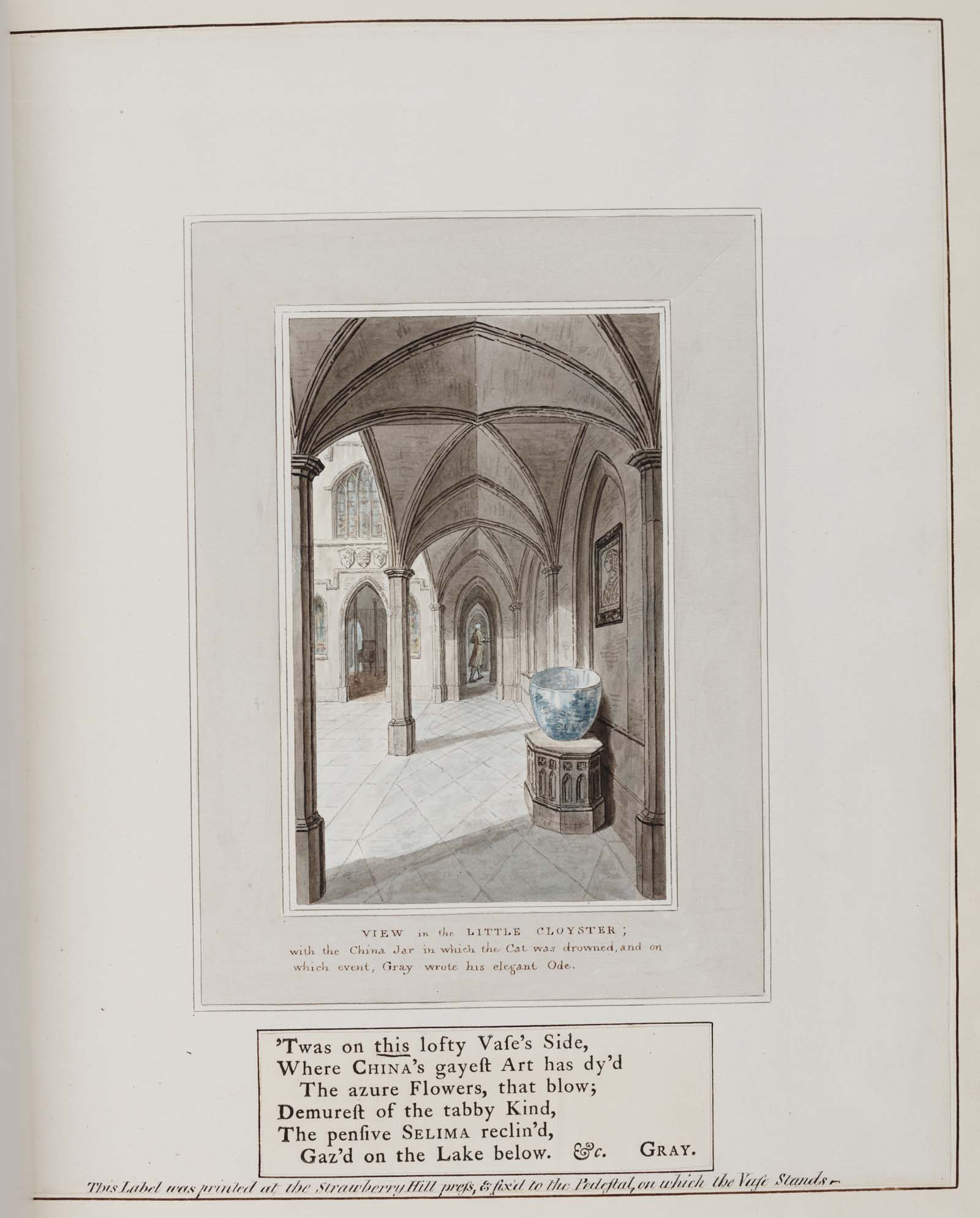 John Carter, View in the Little Cloyster with the china jar in which the cat was drowned, and on which event Gray wrote his elegant ode. c. 1790. Courtesy of The Lewis Walpole Library, Yale University.

As part of the mid-1700s craze for all things Chinese, especially porcelain, Horace Walpole amassed a collection of around 300 pieces but the most (in)famous was the large blue and white goldfish tub, which is goes back on loan to Strawberry Hill from the Earl of Derby’s collection.

In accordance with Gray’s desire, the Ode was initially published anonymously in 1748, however the author’s true identity was soon discovered, giving Walpole the idea to publicly celebrate his friend’s talent. The two had been companions on a grand tour and Walpole published his friend’s poems in an elegant quarto volume, illustrated by another friend, the draftsman Richard Bentley (1708-1782).

The book was finally published in in 1753, and a copy can be seen in the display.

The cat accident happened in 1747 in Arlington Street, Walpole’s London house but the deadly bowl, along with many other works of art, was moved to Strawberry Hill sometime in the 1760s. In 1773, Walpole commissioned a Gothic-style pedestal for the tub and a label to be affixed to it with the first stanza of the poem.

After 1778 it was moved to the Little Cloister, outside of the house, with an 1784 description describing the new location thus: “On a pedestal, stands the large blue and white China tub in which Mr. Walpole’s cat was drowned and on a label of the pedestal is written the first stanza of Mr. Gray’s beautiful ode on that occasion.”

“‘Twas on this lofty vase’s side, Where China’s gayest art has dy’d. The azure flow’rs that blow, Demurest of the tabby kind, The pensive Selima reclin’d, Gaz’d on the lake below”.

This location is documented in John Carter’s (1748-1817) pen and ink drawing designs of the hall and the cloister (1788) which are also in the display.

Some believe the the pedestal may have been an effort not to see further misfortunes happen to his pets – however Walpole had an unfortunate record as an animal owner, and Selima was not the only one to die in tragic circumstances.

In 1739 his dog, Tory, was killed by a wolf on Monte Censio in Italy. Another dog, Bettina, died falling from a balcony in Florence whilst his spaniel, Rosette, died in a room fire. To compensate for his numerous losses, the Marchesa Grifoni gave him a new dog, Patapan, a Roman spaniel who fortunately managed to die of natural causes. 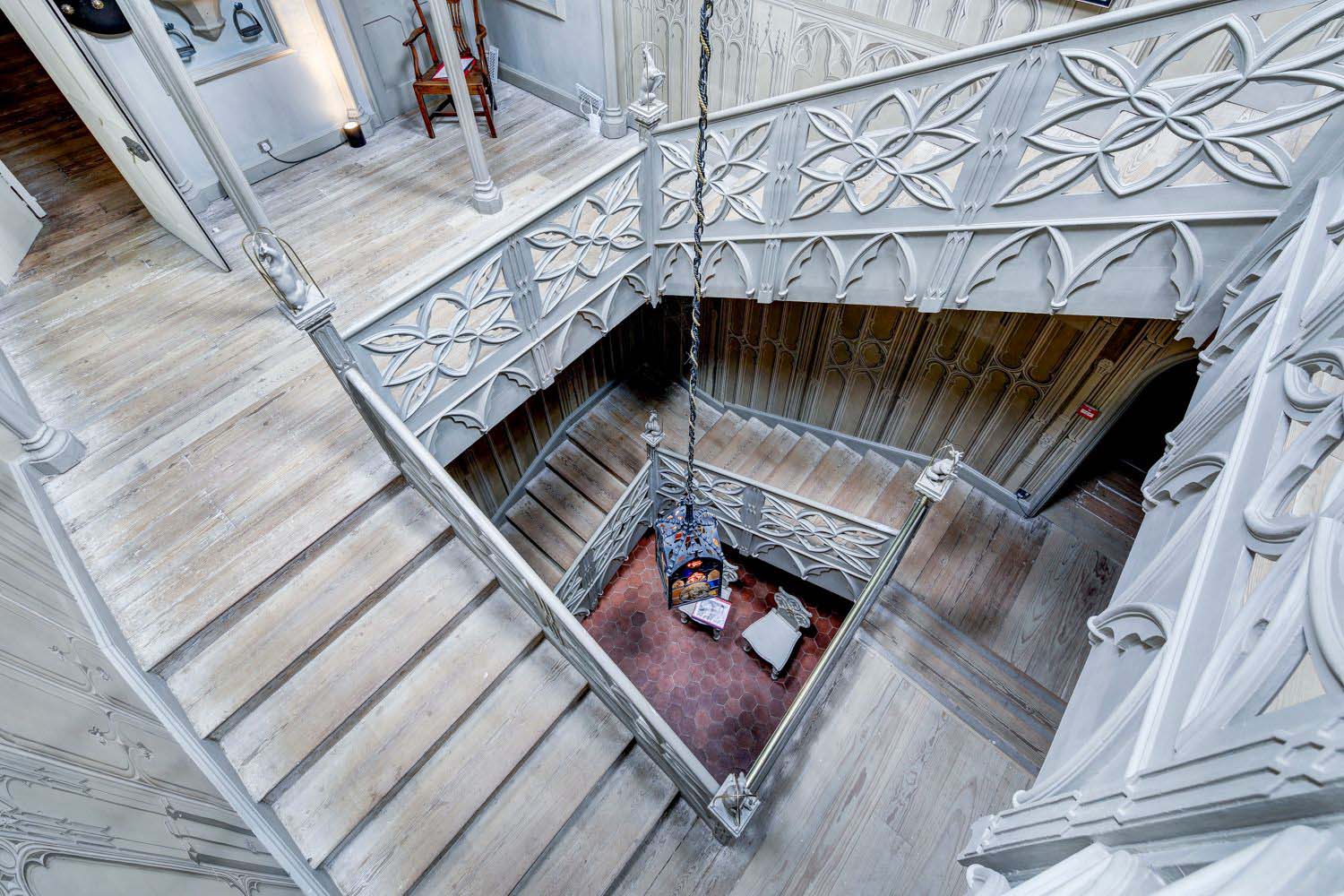 The famous staircase at Strawberry Hill seen from above. Photo Matt Chung 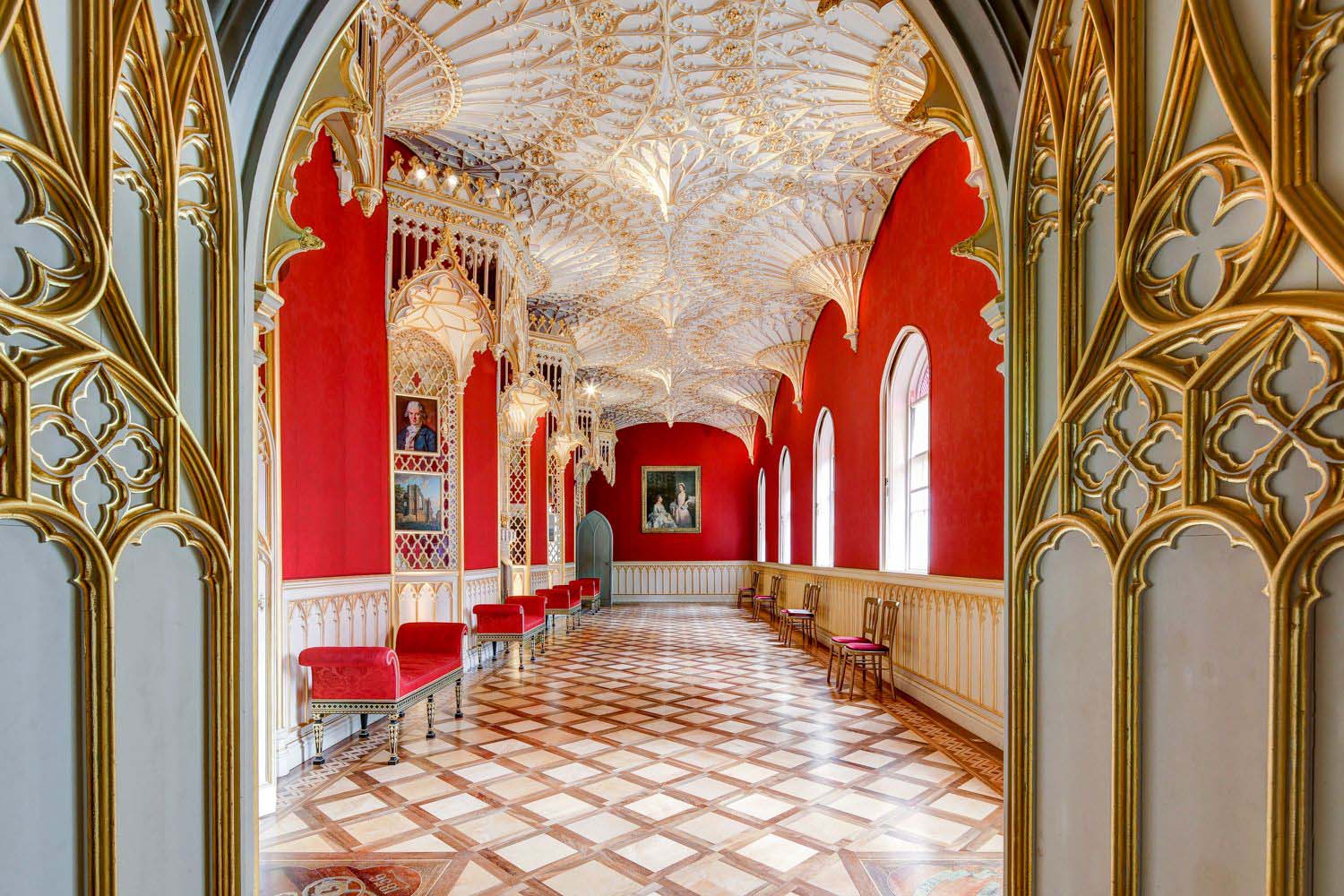 Little wonder that Walpole had his very own pet cemetery situated behind his own Chapel in the Wood (that today sits in the grounds of St Mary’s University that neighbours Strawberry Hill on Waldegrave Road).

“Walpole once said, “my buildings, like my writings are of paper, and will blow away ten years after I am dead”, says Dr Silvia Davoli, Curator at Strawberry Hill House. “Walpole was wrong about their frailty, but certainly right about the paper.

“The history of the goldfish bowl perfectly exemplifies the close relationship that Walpole established between the house, the collection and the written word. Like in a pop-up book, Strawberry Hill emerges from Walpole’s collection of architectural prints, while, conversely, a domestic accident and a real object are forever immortalized thanks to their descriptions on paper.”

In Focus: Goldfish Bowl can be enjoyed at Strawberry Hill House from July 6 – September 30 2021

Created by Horace Walpole in the 18th century, Strawberry Hill is internationally famous as Britain’s finest example of Georgian Gothic revival architecture. It also inspired the first gothic novel The Castle of Otranto. The Strawberry Hill Trust, supported by the Heritage Lottery Fund, has recently undertaken a £9 million repair…