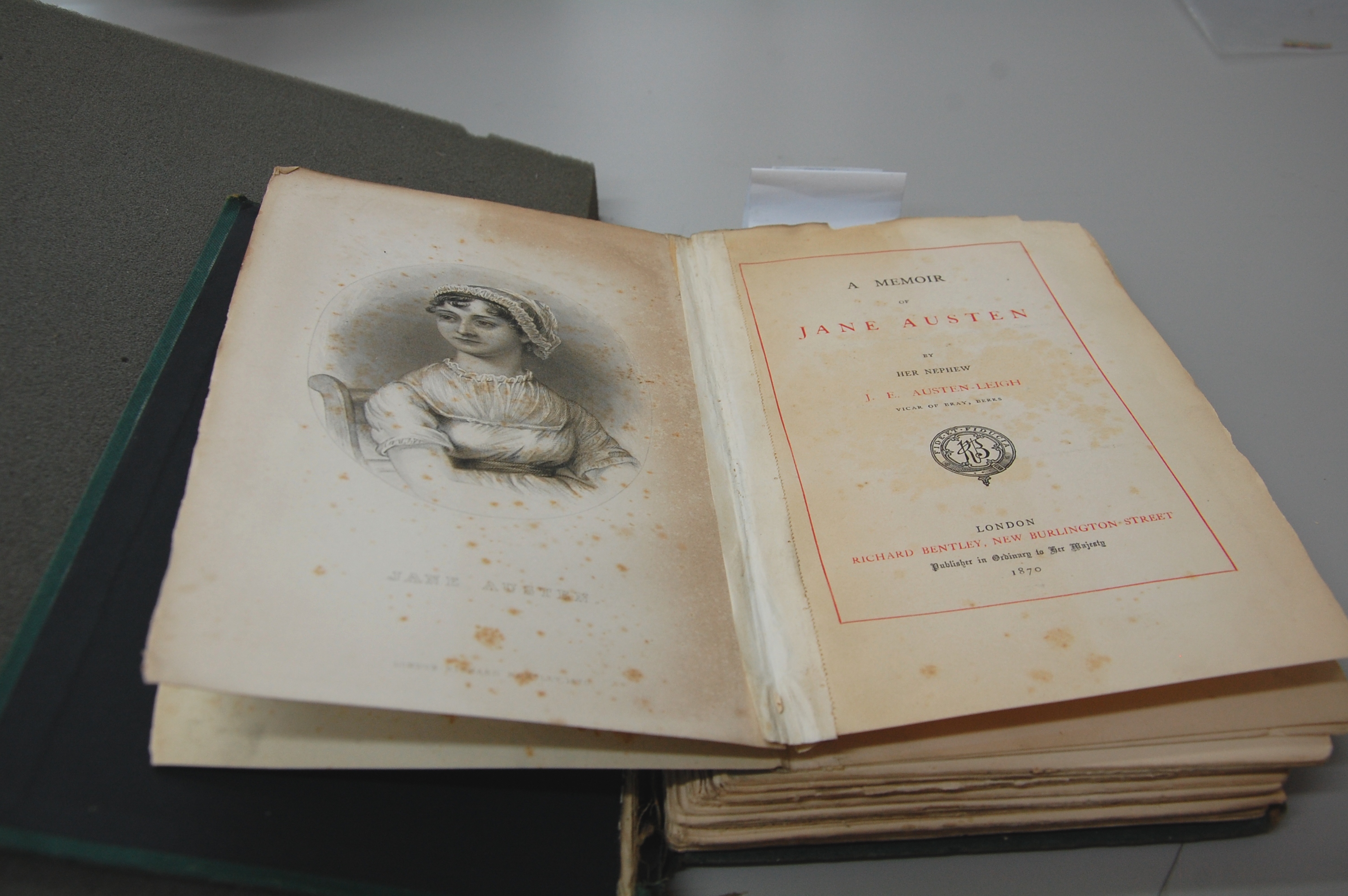 Jane Austen scholars found a note – and got very excited

Such is the worldwide interest in Jane Austen and the dearth of handwritten manuscripts relating to her novels that any newly discovered piece of writing is pored over for insight into the workings of the great novelist.

In May 2014 conservators from West Dean College, working for Jane Austen’s House Museum in Chawton, revealed a rare piece of text, handwritten by Austen in 1814, which could throw light on her thought processes relating to her great morality novel, Mansfield Park.

The small piece of paper, pasted into a letter written by her nephew, James Edward Austen-Leigh, and attached to a First Edition of his Memoirs of Jane Austen (1870), has been revealed as containing part of a sermon copied in Austen’s own hand in 1814.

It is known that Austen often assisted her brother, The Revd. James Austen, in copying his sermons. 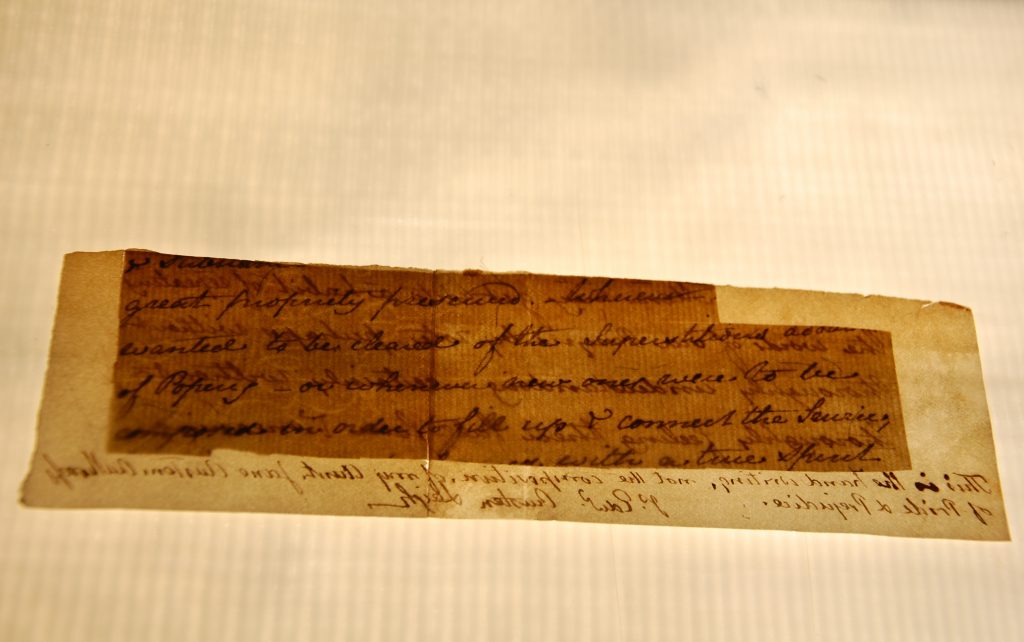 After a painstaking process involving the introduction of small amounts of humidity, the shadow of further handwriting, which could be seen on the reverse of the paper but not read, has now also been revealed, which reads:

wanted to be cleared of the Superstitious [address?] |

of Popery – or whenever new ones were to be |

composed in order to fill up & connect the Services, |

… with a true spirit” 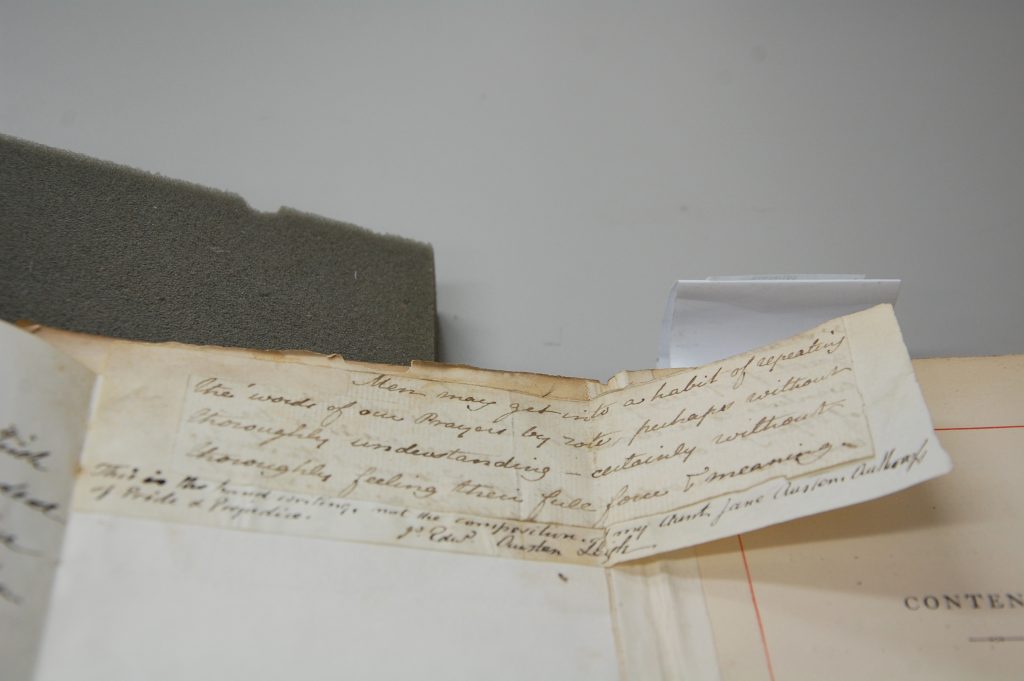 These mysterious fragments of writing were tacked on to the letter, dated 1870 and addressed by Austen Leigh to a friend in the clergy.

The discovery had scholars pondering its significance in relation to Mansfield Park, which touches on themes of religion and morality and was published the same year in 1814.

“If Austen-Leigh’s dating is accurate, the four line passage easily read on the recto (front) of the scrap holds echoes of a discussion in Mansfield Park, Chapter 34, on the ‘art of reading’ and its importance to the modern clergyman,” said Professor Kathryn Sutherland, a trustee of Jane Austen’s House Museum.

“The scrap raises the possibility that the novel inspired James’s sermon and even demonstrates the cross-fertilization between Jane Austen’s creative writing and the wider life of her family.”

Professor Sutherland said the newly revealed fragments on the reverse were “especially intriguing”.

“The temptation is to link them to the religious agenda for national revival outlined in Mansfield Park and referred to in Jane Austen’s letter of 2 September 1814, where she writes: ‘I place my hope of better things on a claim to the protection of Heaven, as a Religious Nation, a Nation inspite of much Evil improving in Religion.’

“Certainly topics of such high seriousness were under discussion among the Austens in 1814.”

The Memoirs of Jane Austen, containing the letter and rare piece of text, was recently purchased by Jane Austen’s House Museum with the aid of funding from the Jane Austen Society.

The museum commissioned West Dean College to carry out the conservation work ahead of a new exhibition later this year to celebrate the bicentenary of Mansfield Park.

Jane Austen's House Museum, Chawton, Alton, Hampshire. Jane Austen spent the last eight years of her life in this unpretentious cottage in the small pretty village of Chawton from 1809 until 1817. It was in this house that Jane’s genius flourished and where she was free to write. It was…