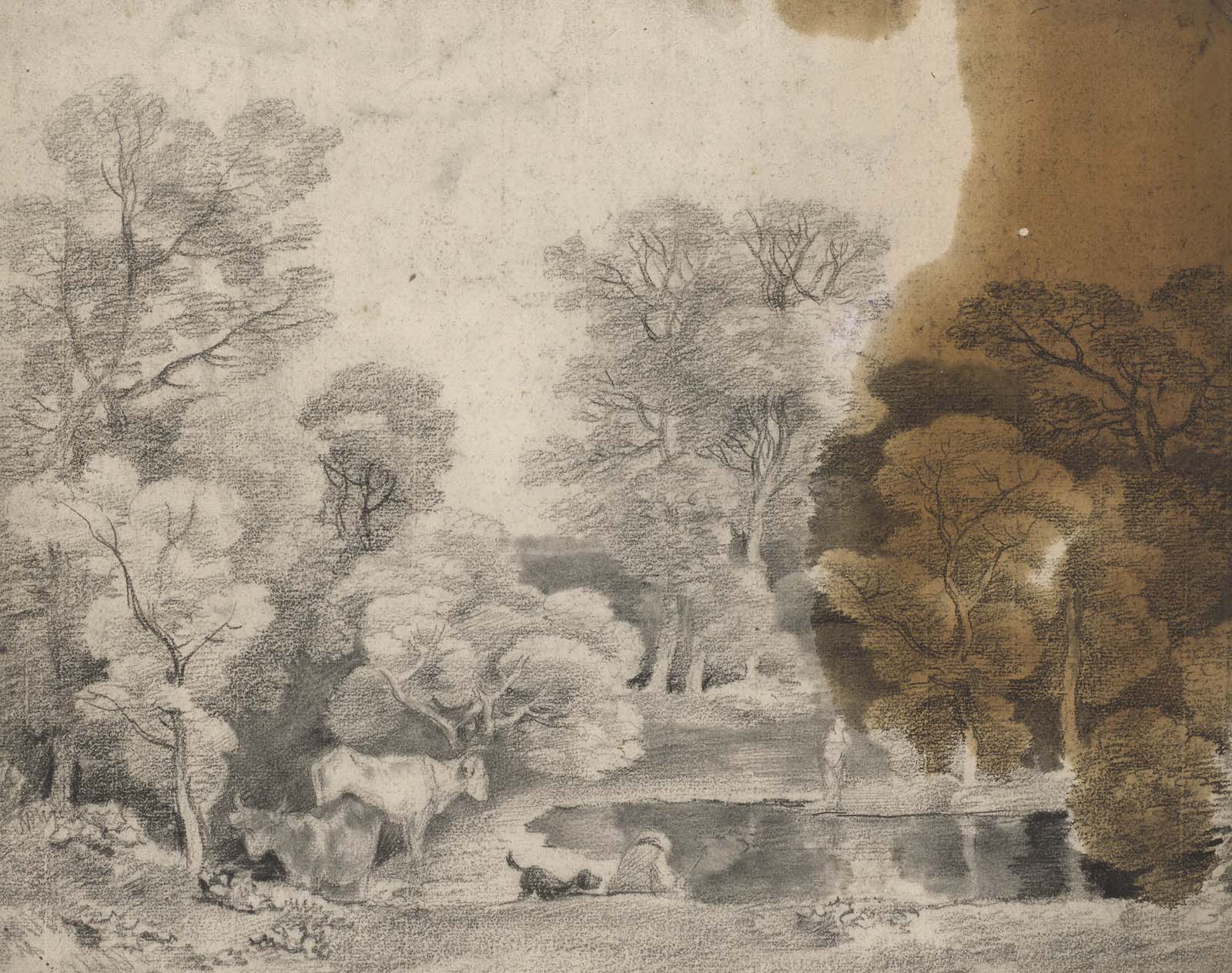 One of the most famous names in British art history, Thomas Gainsborough is well known as a society portraitist, and as was the custom in the late 1700s his portraits allowed him to take up residence in Pall Mall where he could easily serve the needs of the aristocracy. But he is also recognised as a landscape painter whose own candid letters reveal his love of the England’s bucolic charms.

Around this time he wrote to his friend William Jackson: “I’m sick of Portraits and wish very much to take my Viol da Gamba and walk off to some sweet Village, where I can paint Landskips and enjoy the fag End of life in quietness and ease”.

As the Morning Herald noted in its 1788 obituary of Gainsborough, ‘nature was his teacher and the woods of Suffolk his academy.’

The genesis of this talent for capturing England’s bucolic charms can be explored in these recently discovered sketches in the Royal Collection. 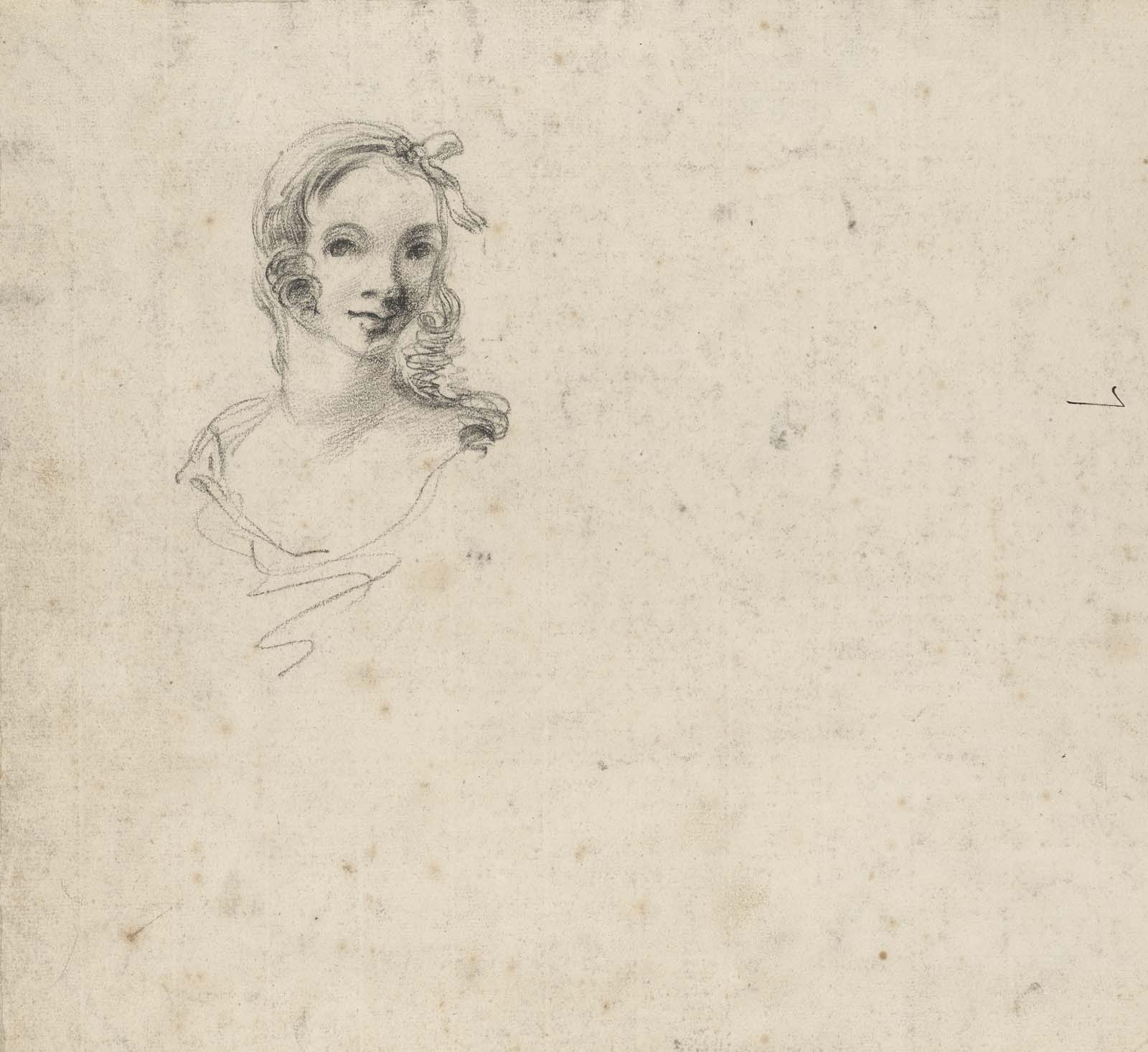 The reattributed drawings by Thomas Gainsborough were contained in an album titled ‘Sketches by Sir E
Landseer’. The drawings were misattributed to Landseer for over a century. Royal Collection Trust / © Her Majesty Queen Elizabeth II 2021 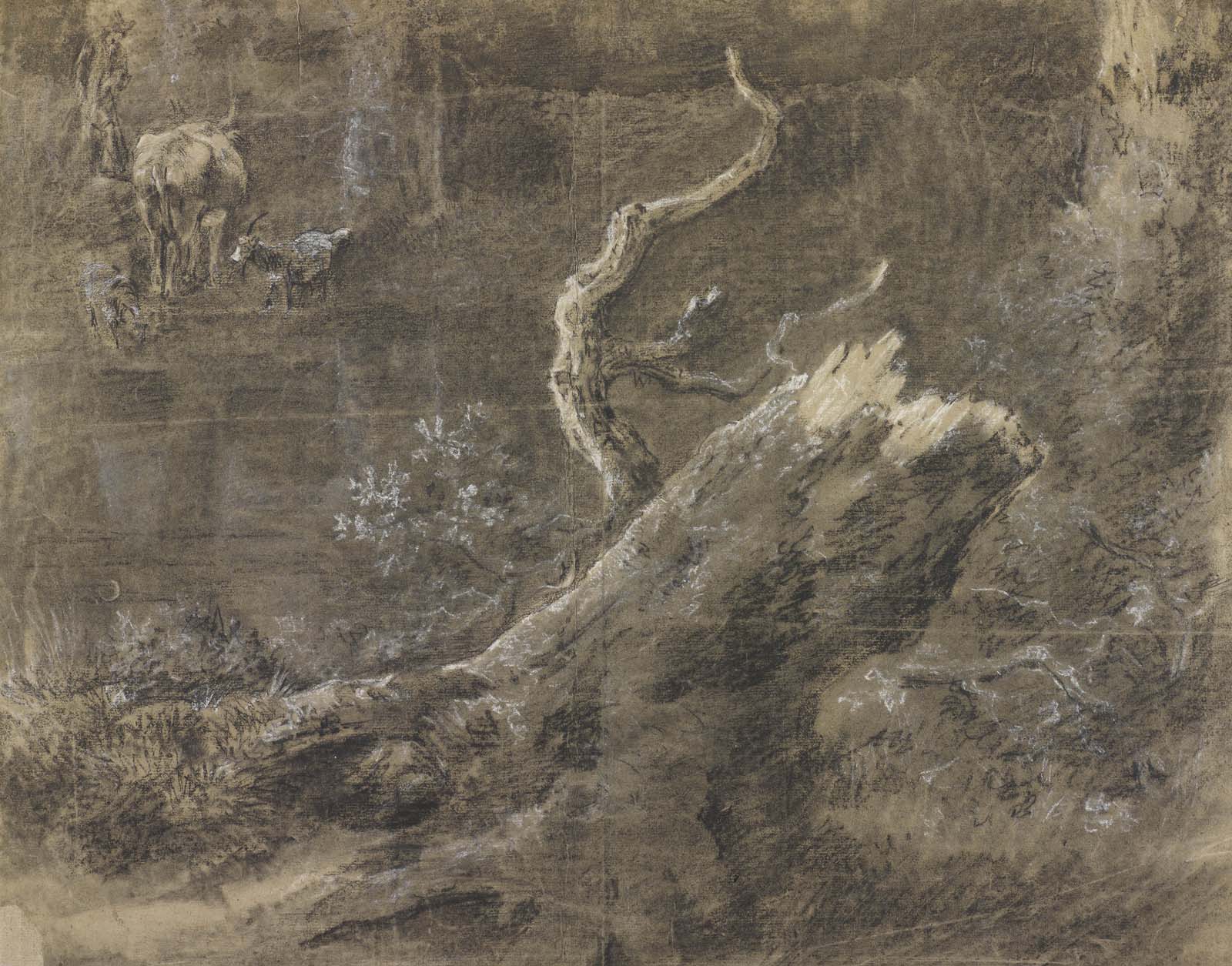 The drawings, produced in the late 1740s when Gainsborough was in his early twenties, were previously believed to be by the painter Sir Edwin Landseer, having been acquired by Queen Victoria from his studio in 1874.

They were then housed in the Print Room at Windsor Castle, bound in an album titled ‘Sketches by Sir E Landseer’.

Offering an intimate glimpse into the early career of one of Britain’s best-loved artists, their discovery represents a major contribution to the understanding of Gainsborough’s work as a draughtsman, and dramatically expands the number of known drawings from this early part of his career.

For those who have not seen it before, his study for one of this most famous landscapes, Cornard Wood, will be a revelation. Hanging alongside the finished painting, newly conserved and loaned by The National Gallery, London, the painting and its preparatory drawing are united for the first time since they were last together in Gainsborough’s studio.

The drawing offers a fresh glimpse into Gainsborough’s creative process. He ruled a squared grid over the preparatory drawing, a common technique that allowed an artist to transfer (and enlarge) a composition square by square from a study sheet onto a larger canvas.

Numbers pencilled along the lower edge of the sheet allowed him to keep track of the transfer process, while tantalising traces of oil and paint suggest he had the drawing close to hand while working on the painting in his studio. 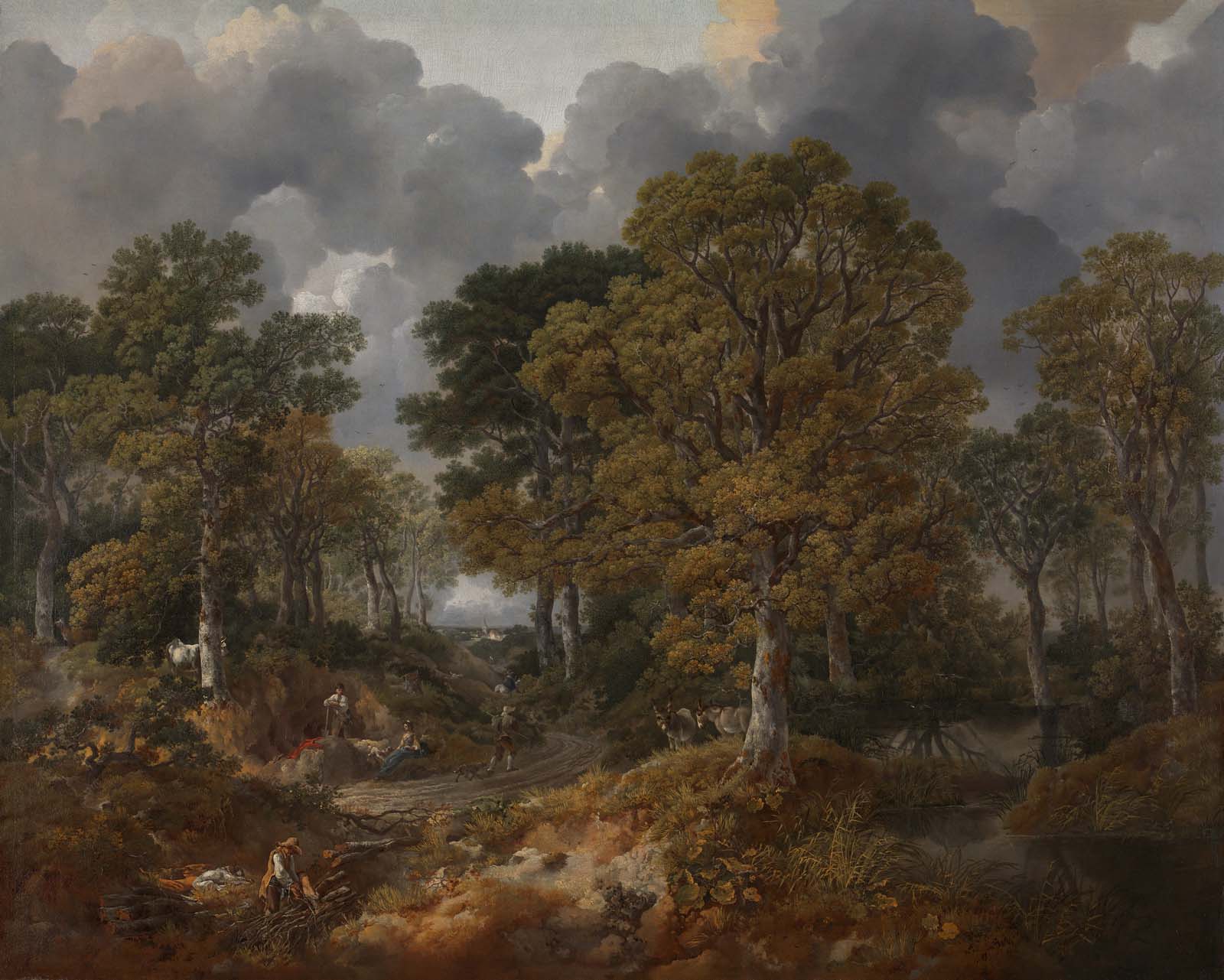 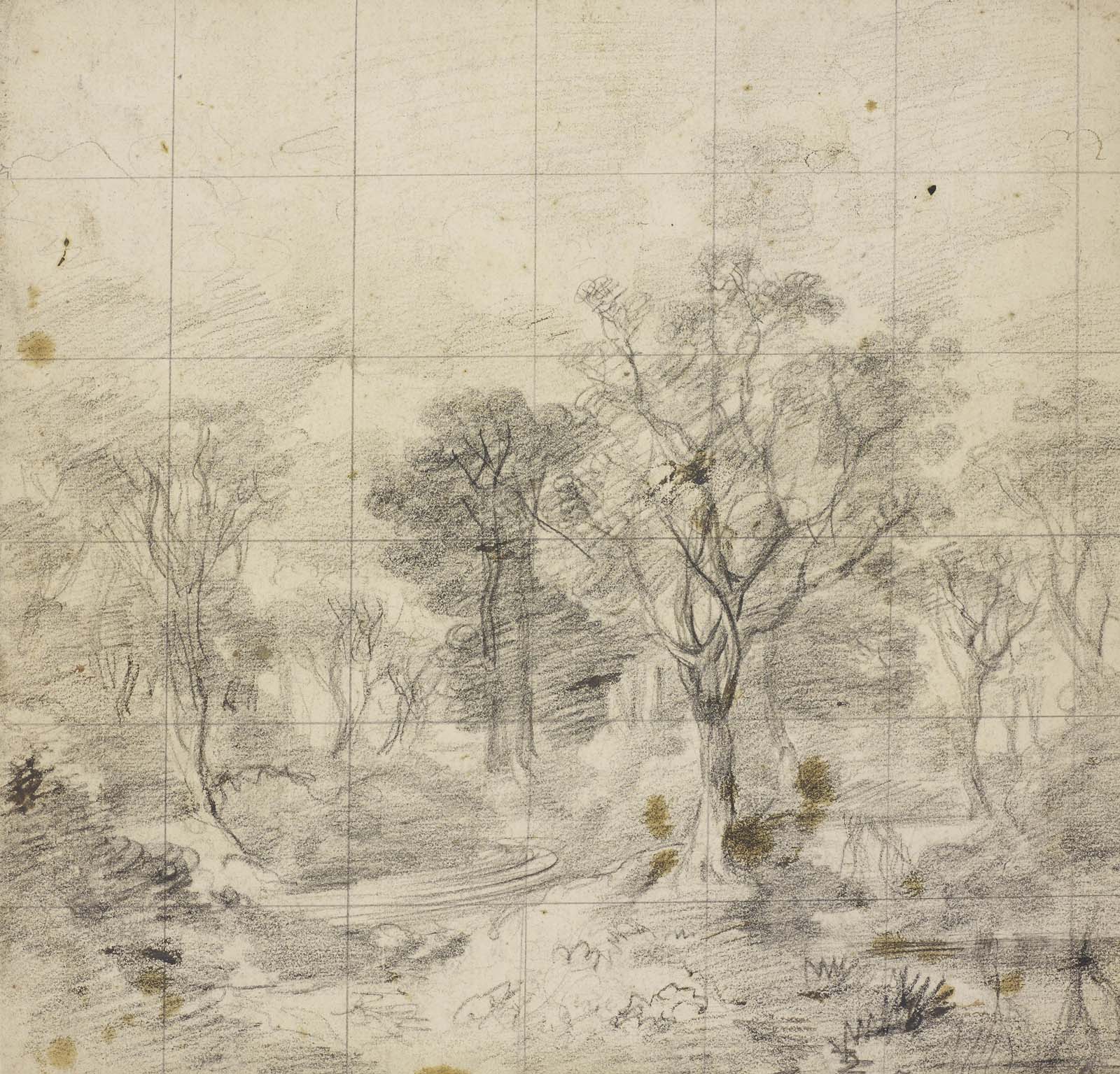 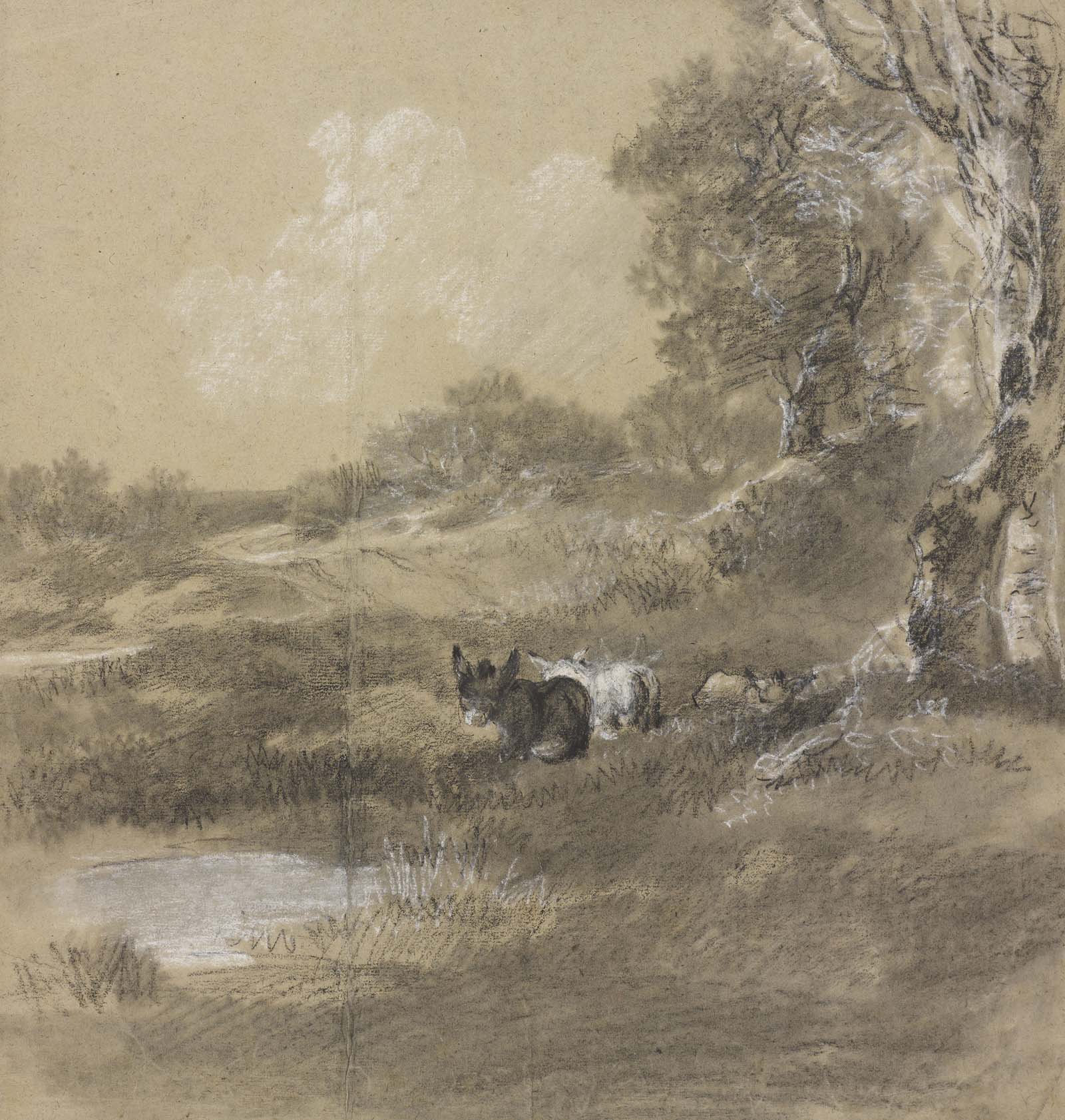 In contrast to his formal society portraits, which tended to depict landed gentry within their private estates, the subject here is the common land and woodland near Great Cornard, about two miles from Gainsborough’s childhood home, bustling with local people gathering wood and grazing animals. The richly coloured and affectionately painted scene reflects both Gainsborough’s observational skill and his deep love of the Suffolk countryside.

Further revelations from within the collection were revealed when conservators at Windsor Castle removed the drawings from their album in preparation for this exhibition. Four of the sheets were discovered to have further drawings on the reverse, where Gainsborough used both sides of the paper to experiment with compositions.

One is a small study of the head of a young woman, in the slightly naïve figure style of Gainsborough’s early portraits. The sheet is displayed double-sided in the exhibition, encapsulating the fluidity with which Gainsborough switched between – and often combined – portraiture and landscape as he sought to make his mark on the British art scene.

But it’s the landscape that dominates the narrative flow of the exhibition, which also points to the decisive formative influence that Dutch landscape painting had on the young Gainsborough. Having been employed by an art dealer in London to restore and copy works by 17th-century artists such as Jacob van Ruisdael and Jan Wijnants, the similarities between these Dutch scenes and the flat Suffolk countryside must have been a revelation to the young painter.

He admired the naturalistic approach of Dutch artists and emulated their depictions of brooding skies, dense foliage and fallen trees, evident in his Landscape with a Pool (c.1746-47), on loan from the Fitzwilliam Museum, Cambridge.

Ruisdael’s A Pool surrounded by Trees, and Two Sportsmen coursing a Hare (c.1665), on loan from The National Gallery in London, clearly shows the influence that this artist had on Gainsborough’s approach to composition and detail. 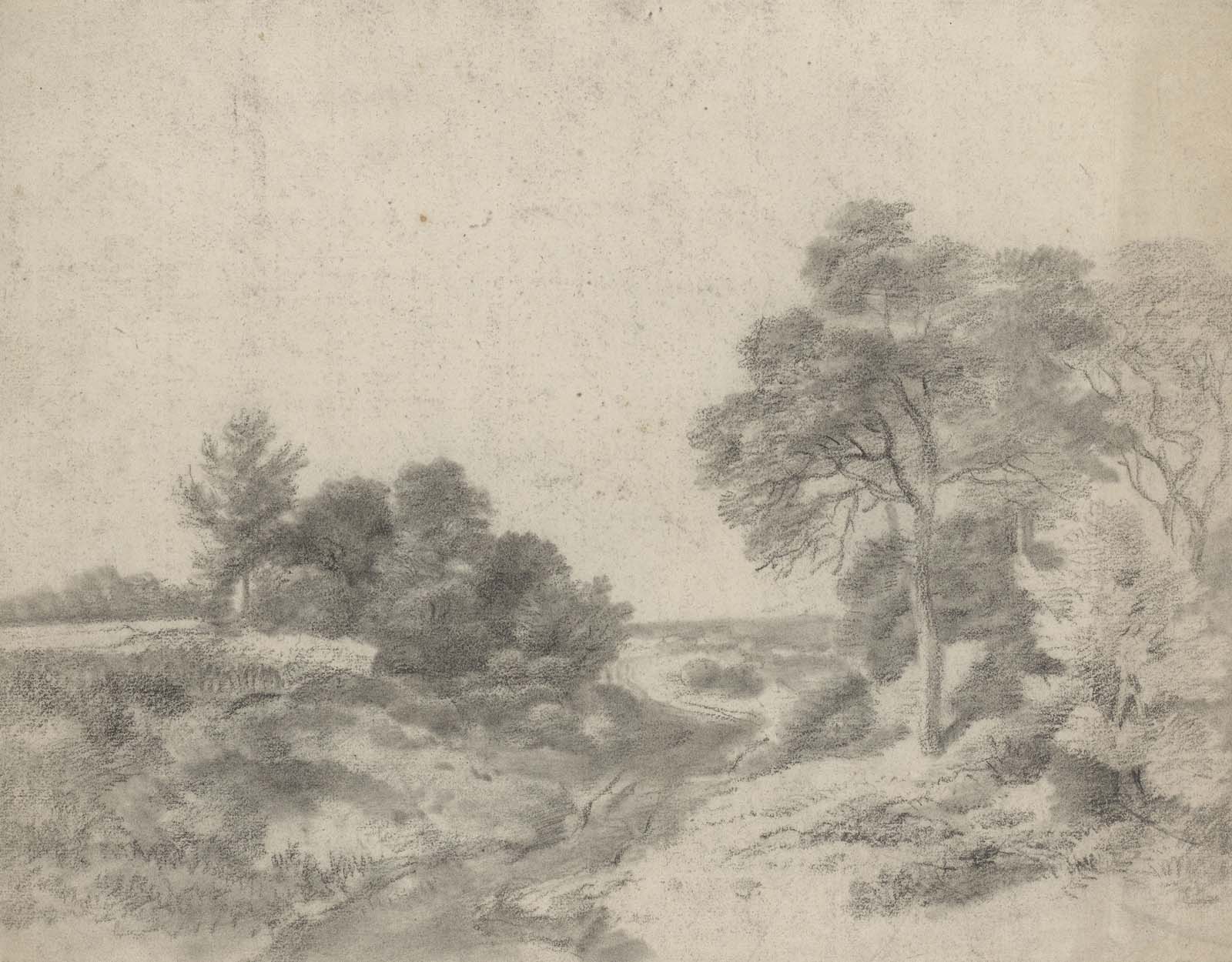 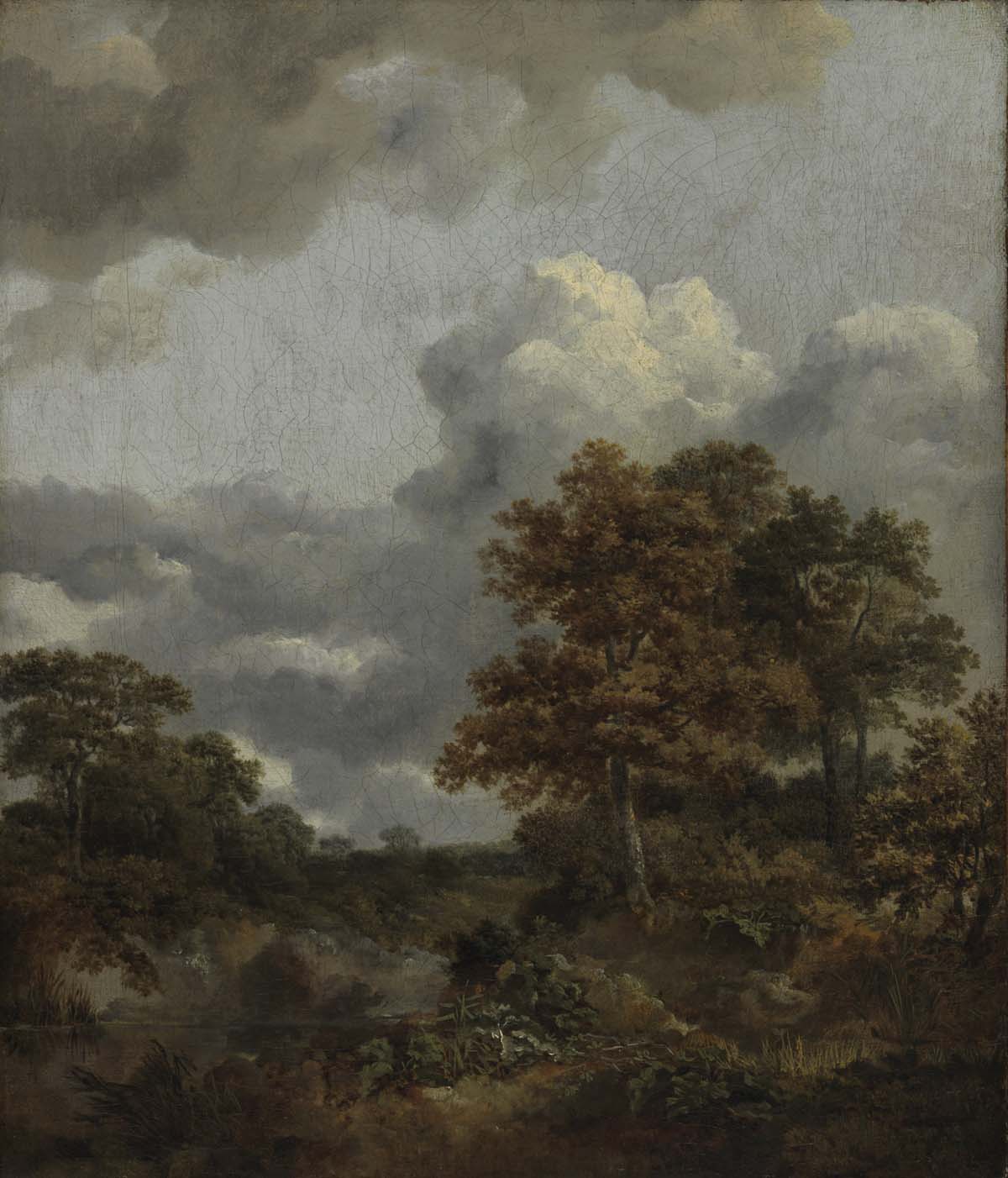 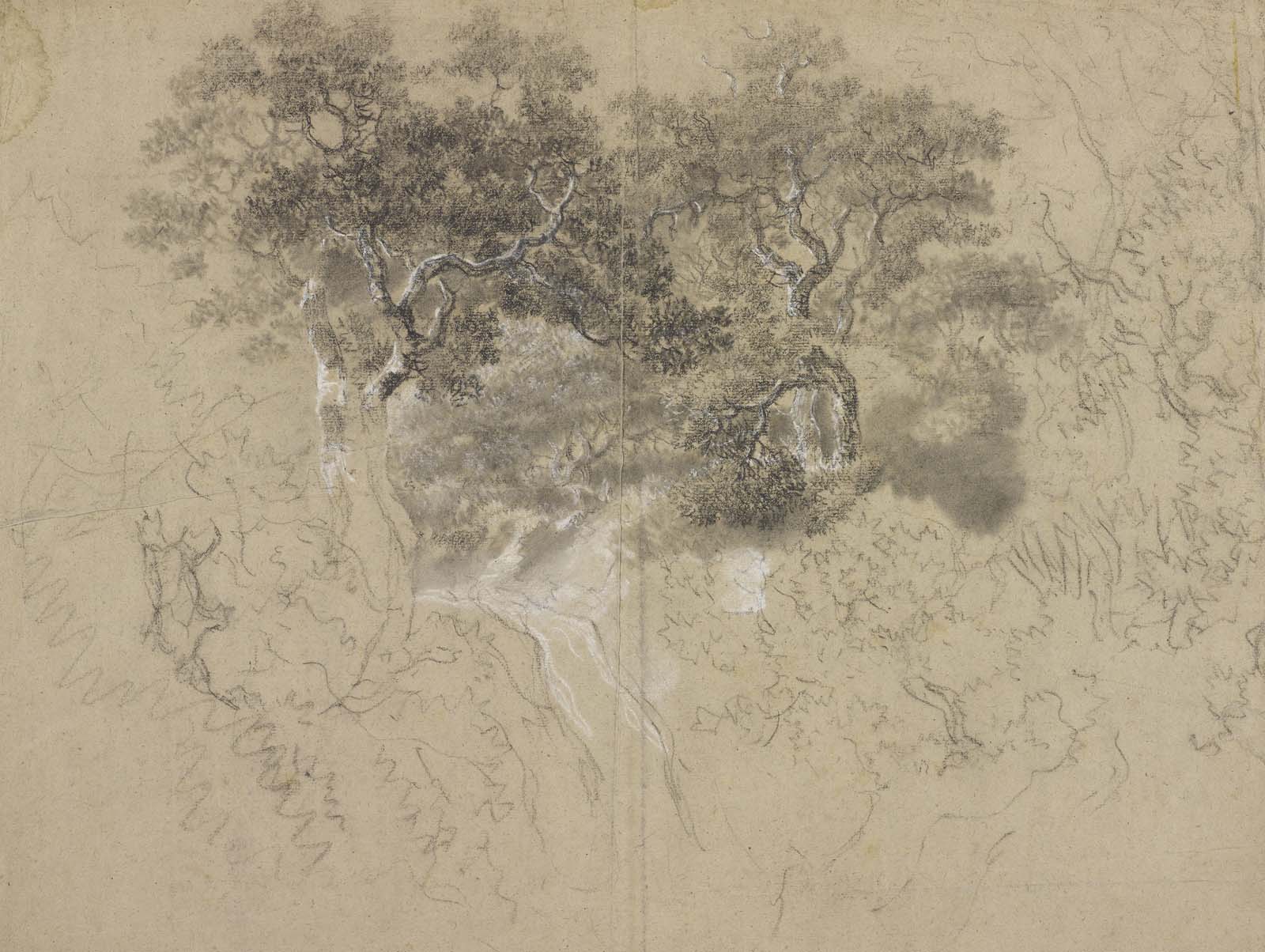 Intriguingly, most of the drawings are on coarse paper imported from France, usually used for wrapping and packing. This cheap paper presumably appealed to Gainsborough as its rough surface provided good friction for drawing in chalks, while its grey tone meant he could experiment with using both black and white.

His chalks were held in a split-stick known as a porte-crayon and blended onto the paper using a wad of tightly rolled leather called a ‘stump’, to create subtle light effects and gradations in tone. By contrast, seven of the drawings are on a fine white artists’ paper, which came from the Netherlands, its smoother surface allowing for detailed foliage drawn in sharp black chalk, as seen in Trees beside a path winding into the distance (c.1748-50).

Three of the drawings feature large brown oil stains, suggestive of an accident in the studio where a jar of linseed oil was knocked onto a pile of drawings.

The condition of the paper also offers evidence of how Gainsborough sketched outdoors. Pin holes visible in the corners of several drawings suggest that he pinned the paper to a portable drawing board.

These open-air (plein air) sketches, such as Trees beside a descending path (c.1746-48) reveal Gainsborough’s drawing process, which began with outlining trees and foliage in black chalk, before working up more detail from the centre outwards.

He also made observational studies of individual plants and animals, such as A study of a tree, possibly a sycamore (c.1746-48), which would later serve as stock motifs to be drawn upon when composing studio paintings.

Gainsborough’s painterly experiments in landscape are now seen as being particularly innovative; these delicate sketches are a valuable glimpse into the genesis of that aspect of his genius. 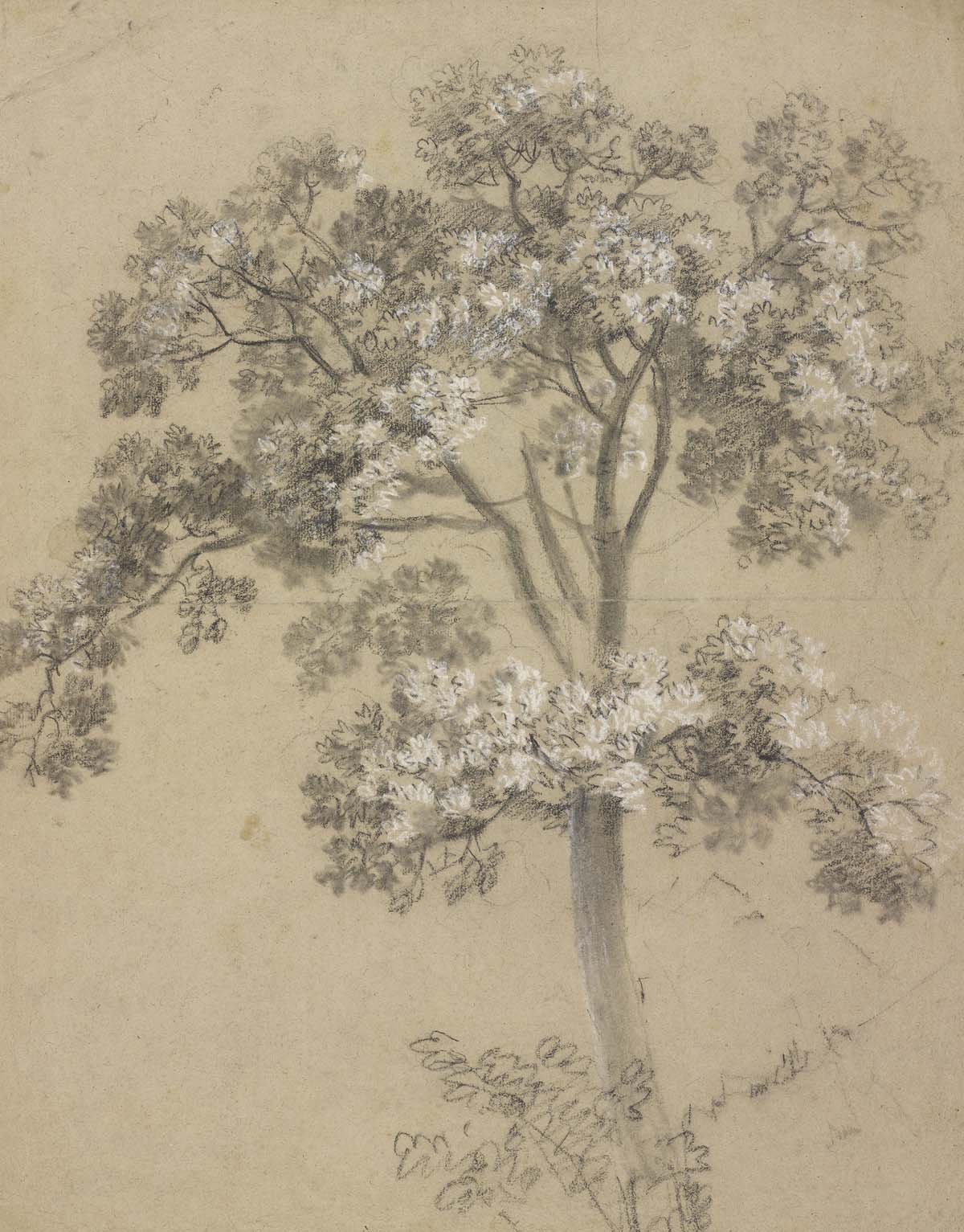 New commissions, Old Masters and more than 2000 ceramic works can be found at the multi award-winning York Art Gallery. Spot the Picasso, David Hockney, L.S Lowry and Grayson Perry and see the largest collection of British Studio Ceramics in the world in the Centre of Ceramic Art. With a…