David Keen, Access and Learning Manager at the Royal Air Force Museum London, on the museum’s Battle of Britain Spitfire

This Spitfire is lovely. It’s a MK1 Spitfire, which was active in the Battle of Britain and claimed a half share of a shot down Junkers 88. It carried eight guns with a total of 2,400 rounds of ammunition, which would last for a mere 15 seconds.

The wing is amazingly thin when you consider that it not only had to support the weight of the aeroplane – the engine alone weighs three quarters of a tonne – but also the considerable weight of the guns and absorb their recoil.

And yet RJ Mitchell and his colleagues, notably Joe Smith at Supermarines the designers, came up with a wing that combines great strength and the right degree of flexibility. The lifting qualities give the aircraft the performance it needed yet it is very thin so as to induce the minimum amount of drag.

This is why with the Spitfire we were able to get greater performance from the same engine than Sydney Camm was able to do with the Hurricane. 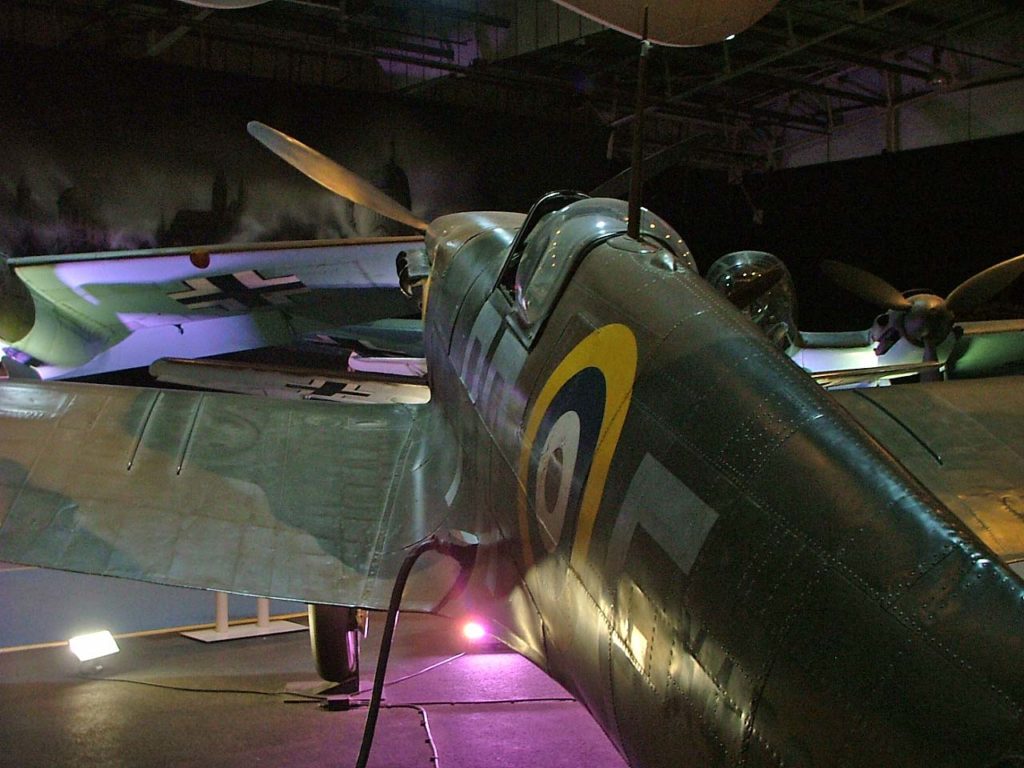 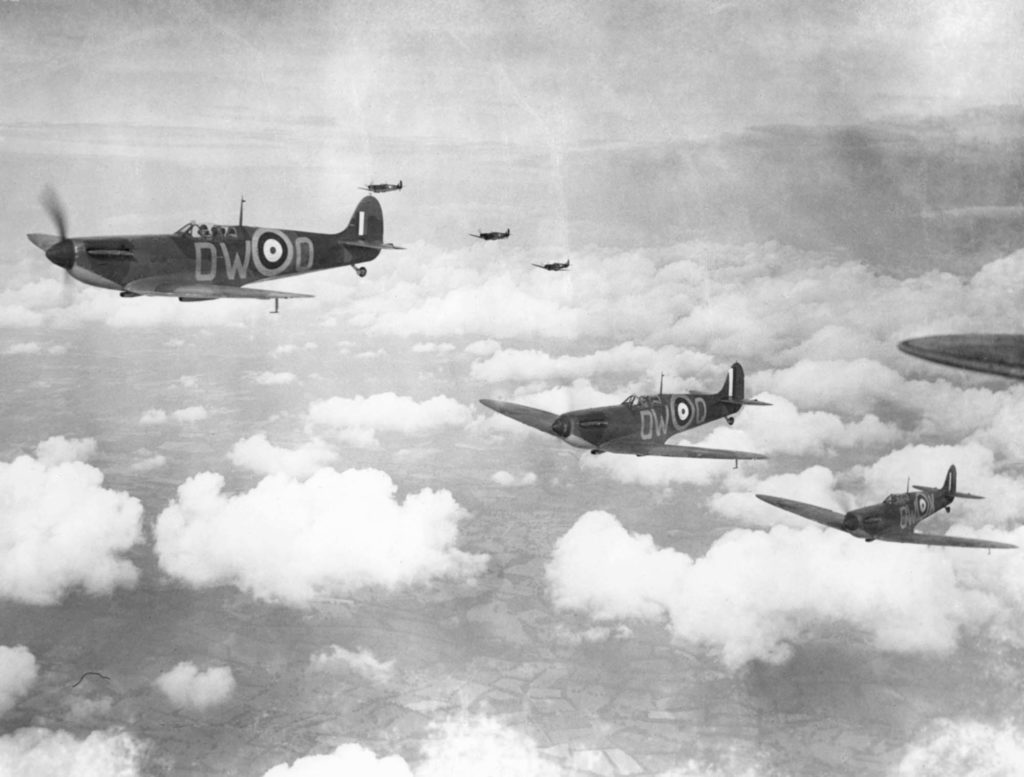 Spitfires in formation during the Battle of Britain. Courtesy RAF Museum

The Spitfire is often compared with the Hurricane and the Messerschmitt BF109 – and I suppose it’s fair to compare it with the Messerschmitt – but the Hurricane was the last of the previous breed of aircraft constructed of a framework with a lot of fabric covering over the top. The Spitfire is all metal. Its strength comes as much from the skin on the outside as from any structure underneath.

Which of the three was the better aeroplane? It is something that can be argued about, but in fact it’s really the wrong sort of question. A skilled pilot in any of the three could outperform mediocre pilots in either of the other two.

At the moment, looking at it here in the Battle of Britain Hall, we can perhaps understand how difficult it was for a pilot on the ground in the Spitfire. He’s seated well back in the airframe, in front of him is a tiny windscreen, which is obscured by the gun sight. The nose of course contains, first of all immediately in front of the pilot, the fuel tanks and then the Rolls Royce Merlin engine. Looking straight ahead there’s not a great deal to be seen.

The distinctive Spitfire wing is this lovely elliptical oval shape but on the ground it does mean that when you look out to the side you can’t really see very much at all. It was all too easy to collide with other objects – including other aircraft – especially during those scramble scenes where you have several aircraft taking off at the same time.

The cockpit fits very snugly around the pilot and it’s not a place for the claustrophobic, but pilots love it because you feel as if you’re wearing a Spitfire. You’re part of the machine and that’s the kind of thing pilots like.

When things start to happen in a Spitfire it all does happen very quickly. The merest forward pressure on the stick raises the tail and then you have to be careful not to get that propeller digging into the runway. But once air speed is reached the aircraft really floats off on its own. You don’t have to do too much and it’s very responsive. Merely by pinching the control column with your thumb and finger you feel as if you’re steering it. It’s a very agile aeroplane. I’ve not yet met any Spitfire pilot, or anyone who has flown a Spitfire, who doesn’t enthuse about it. 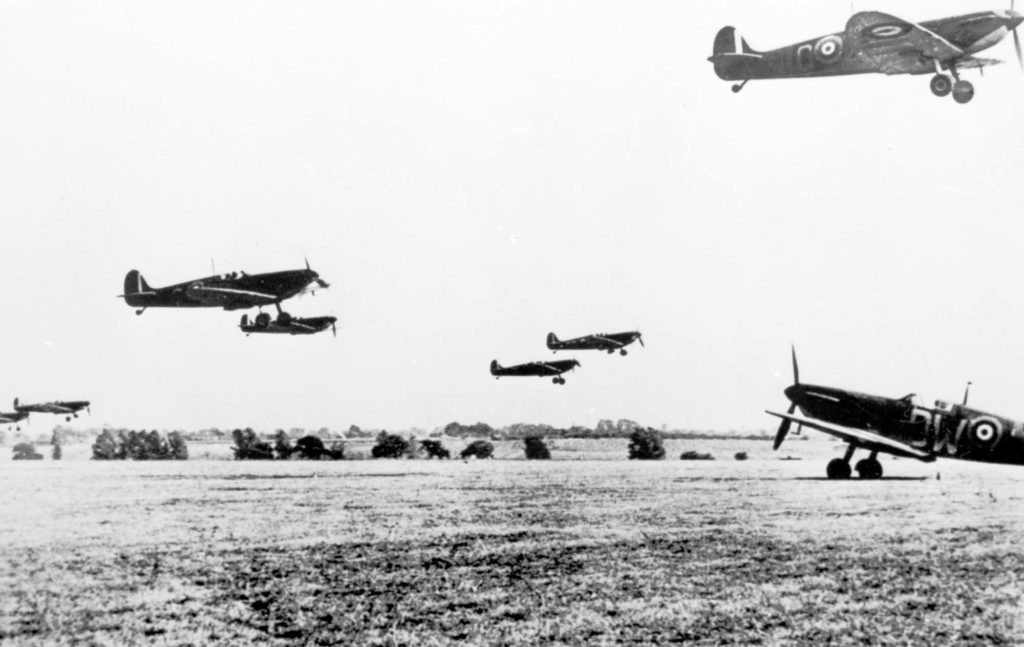 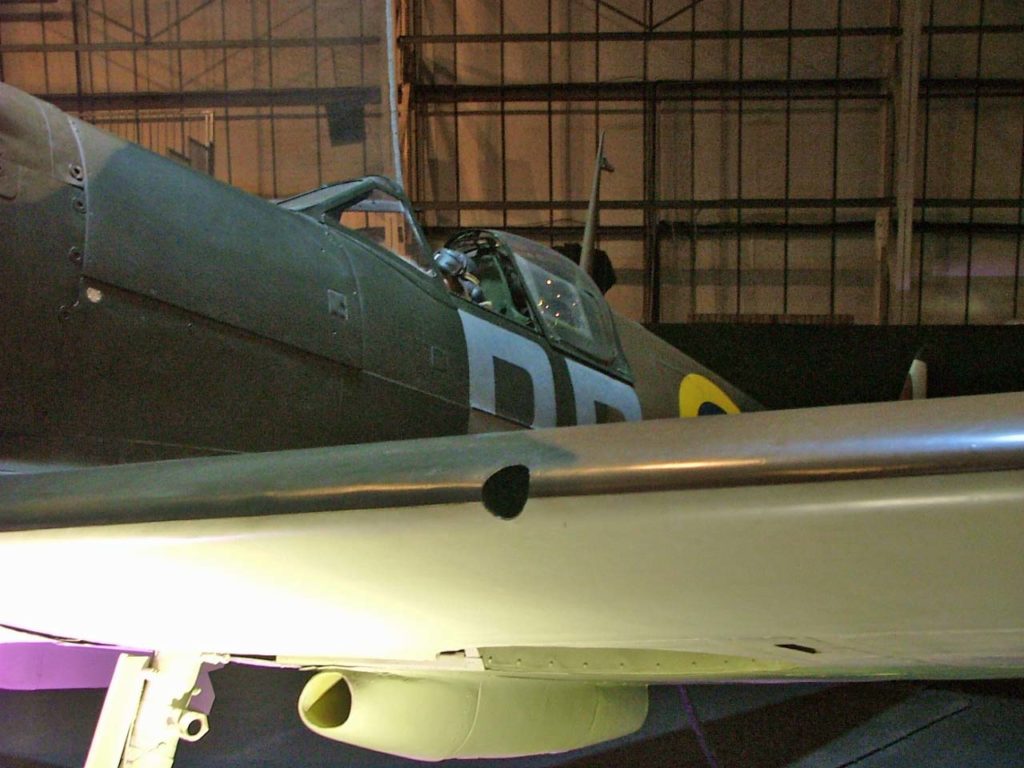 In the Battle of Britain more German aircraft were destroyed by Hurricanes than by Spitfires, but we needed both in 1940. We actually needed more of both than were actually available at the start of the Battle.

All we can say is that the Spitfire had a fearsome reputation as far as the Germans were concerned. If they bailed out and were captured they wanted to know “was it a Spitfire?” because there was no shame in being shot down by a Spitfire. So I think that gives an indication of it.

“In the end it was frightened, tired young men in Spitfires and Hurricanes that actually made the difference.”

It’s one of those bits of machinery that looks right, it had this legendary reputation right from the start and it endeared itself to pilots, who still enthuse over it. A pilot in a Spitfire had that kind of confidence. Perhaps it was that which enabled them to commit themselves to battle more readily than might otherwise have been the case?

As to being the weapon which won the Battle of Britain? It is only part of that. In the end it was frightened, tired young men in Spitfires and Hurricanes that actually made the difference.”

Visit the Royal Air Force Museum page for this Spitfire at www.rafmuseum.org.uk/research/collections/supermarine-spitfire-i/

Get ready for take-off and wing your way over to a wonderful collection of aircraft, interactives, medals, uniforms, film shows and memorabilia on display and trace the story of the RAF and aviation itself. The Royal Air Force Museum’s purpose is to tell the story of the RAF through is…