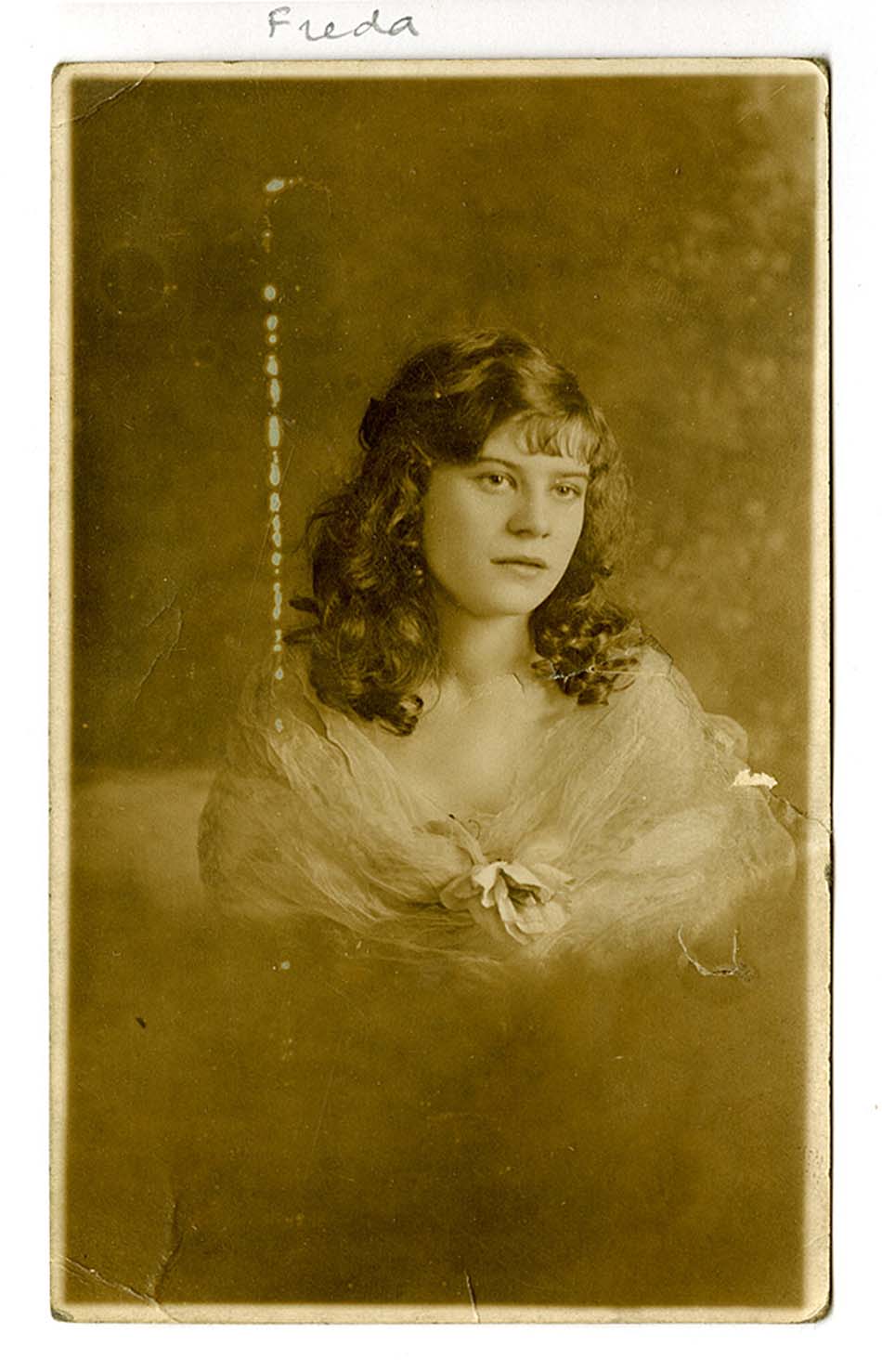 Lynsey Slater, Assistant Museums Officer at Doncaster Museum, on her quest to uncover the story of Freda Hooper, a remarkable woman who was a child entertainer and fundraiser for the troops during the First World War

Among the vast collection of The King’s Own Yorkshire Light Infantry Museum, which is part of Doncaster Museum, there is a simple letter of thanks written and signed during the First World War by a group of soldiers from the 1/5 Battalion.

Sent from the front line in France, the soldiers wrote: “Thank you for the gift of tobacco and cigarettes from the money raised by the sale of your photograph.” But all it has identifying the recipient is “Miss Hooper”.

When I first discovered the letter I immediately thought; “who is Miss Hooper?” She must have been a well-known entertainer or a local person of note for people to want to buy her photograph. But who would have the leverage to do something like that?

The letter contained a long list of men’s names and had been sent while they were on serving fronts. The 1/5 was the local territorial battalion of the regiment, which got me thinking that Miss Hooper must be a well-known Doncaster person, because a huge percentage of the men that served in that battalion were from Doncaster as well. 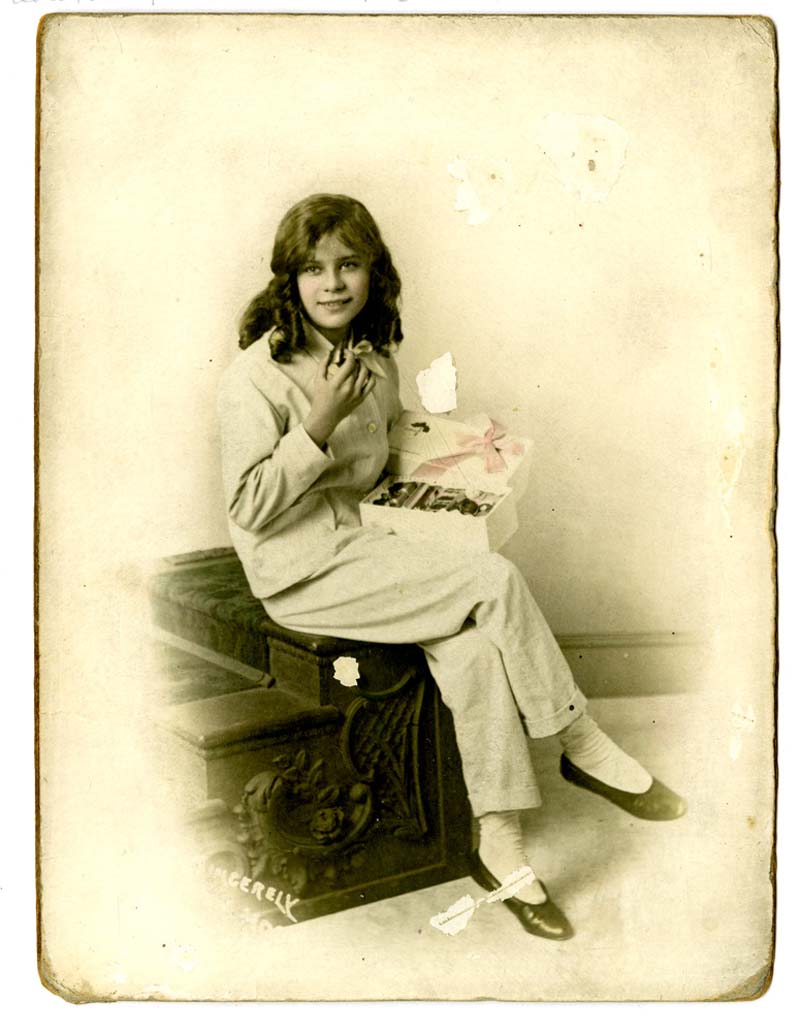 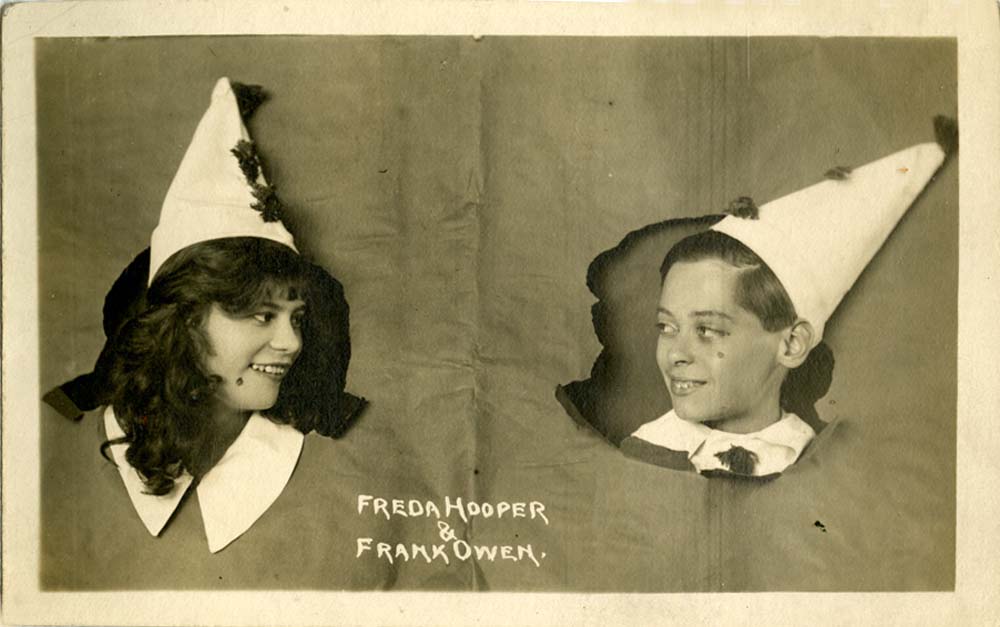 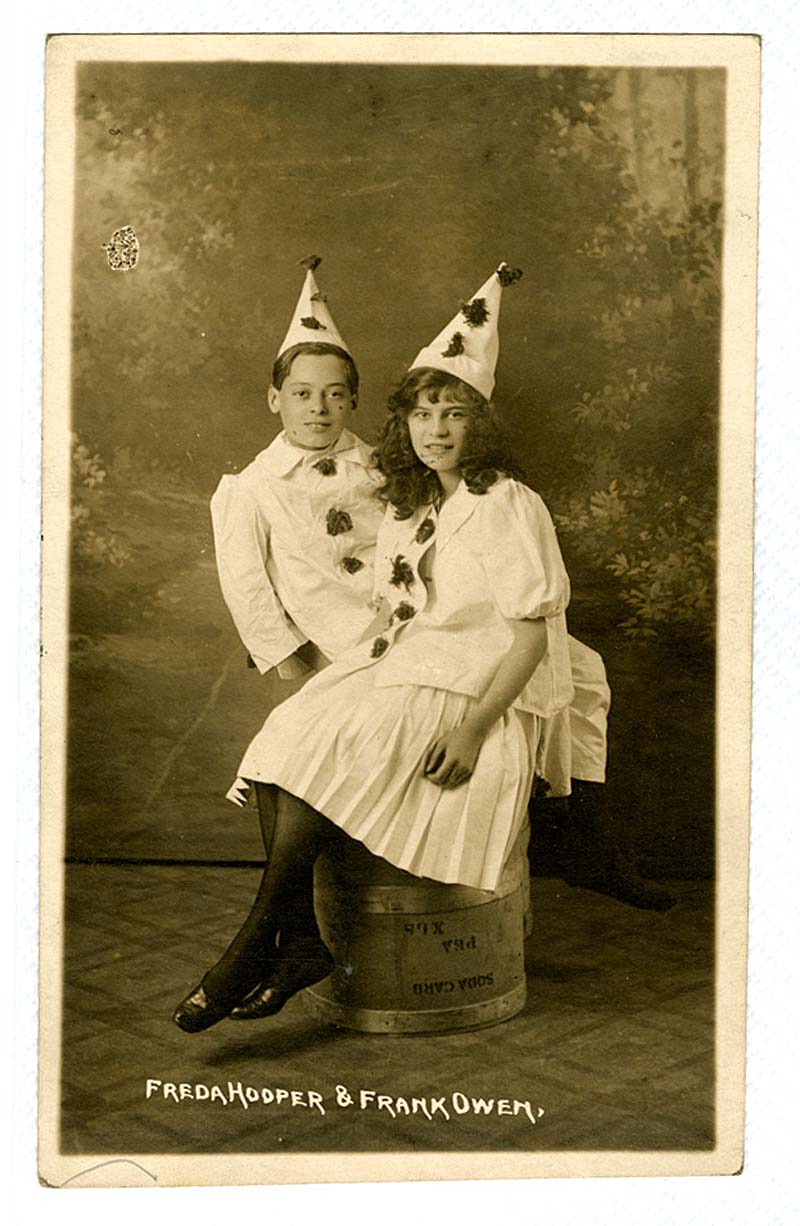 I scoured the census and the only Miss Hooper I found was a teenager. Her dad was a master butcher and the family lived above the butcher’s shop on St Sepulchre Gate in town. I thought, it can’t really be her because she’s very young to be undertaking a big, fundraising programme. She sent three pounds of tobacco and 1,000 cigarettes, which is no small feat, so she must have been able to sell a fair few copies of her photograph to fundraise that amount of money. The thank you letter was sent in 1916, which meant she was only 14!

Then I moved on to some other research about entertainment in the town and I just happened upon a reference in a newspaper to a Miss Hooper doing a show at the workhouse during Christmas 1915. It said that Miss Freda Hooper and the son of the family that ran the workhouse had entertained the inmates and soldiers billeted there.

Around this time we also loaned a huge collection of paperwork from the family who own Hooton Pagnell Hall, which was a hospital during the First World War and in one of the little envelopes there was a photograph and a business card. The photograph was marked “Miss Hooper in memory of entertaining the troops at Hooton Pagnell.” The business card had the St Sepulchre Gate address I had found on the census. It had to be her.

I managed to find out that she was married in 1928, to an Albert Cooper and there was a son also called Albert. I just thought “I’ve got to try and find her family” so I began sending out letters hoping that somebody would eventually get in touch. 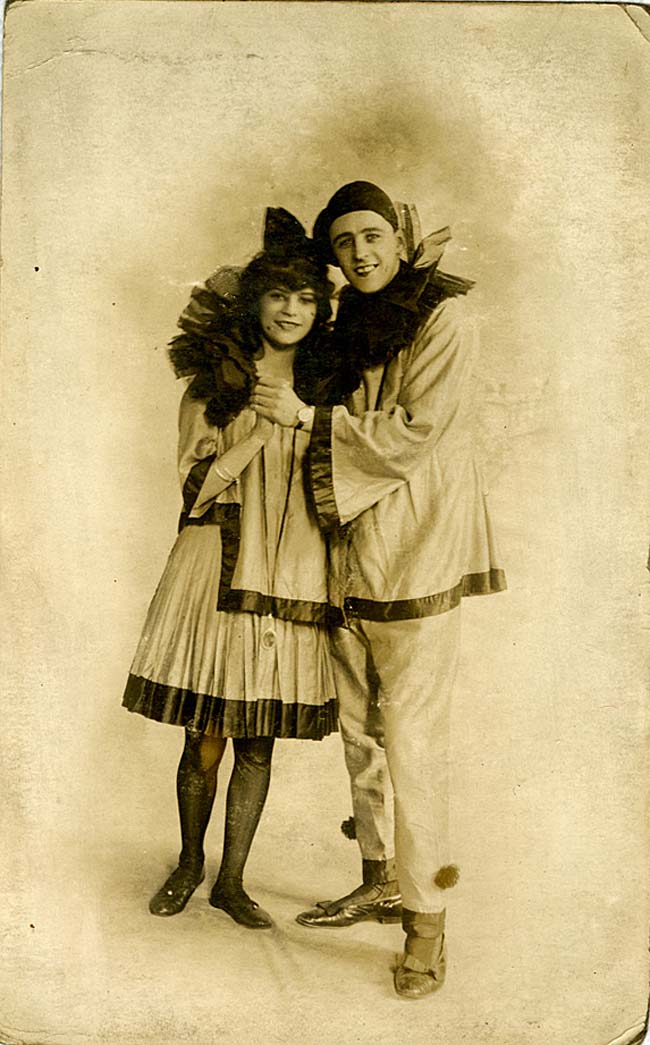 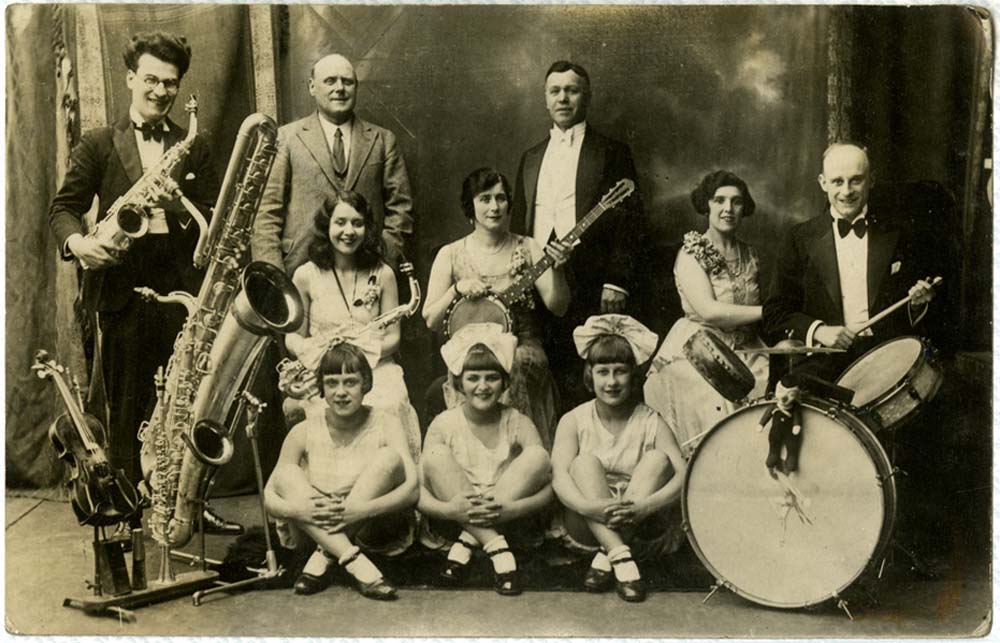 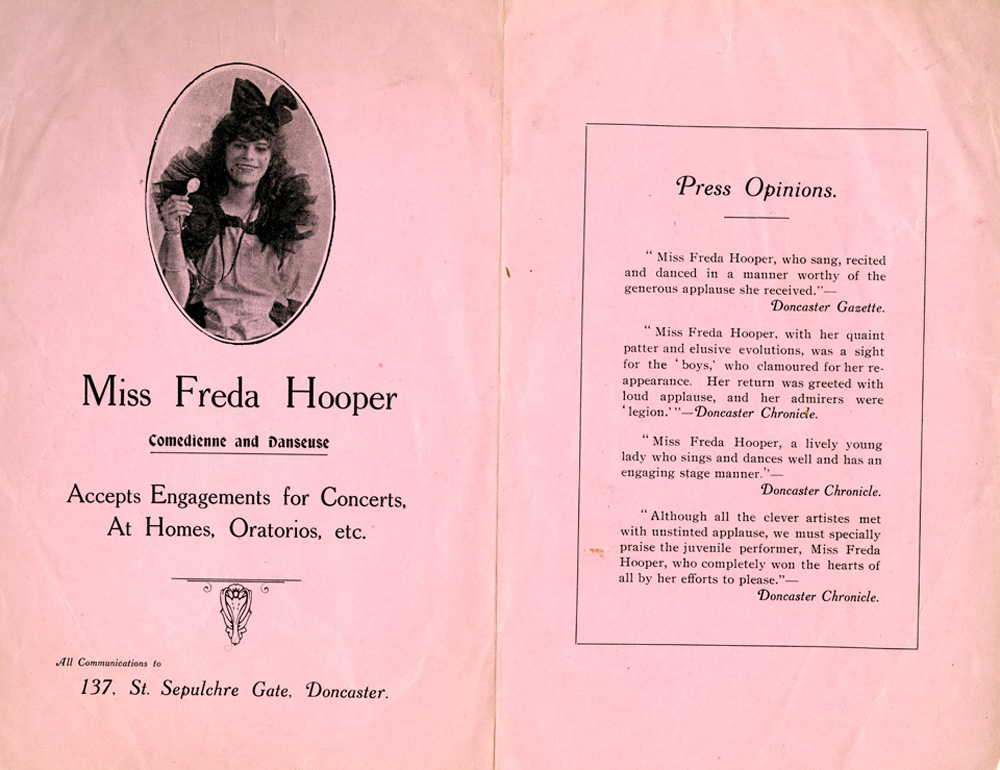 Then one day I got a phone call from a chap who said, “my sister said that you’ve sent her a letter. My mum was Freda Hooper!” He offered to bring his family photo album to the museum.

The photo album is a treasure trove. It contains lots of pictures of Freda in her various costumes and they are all amazing. There’s a photo of her and Frank Owen, the son of the family that ran the workhouse, and there’s a programme from 1911 or 1912, when they did a concert and dance to build the new hospital. She’s listed on that as the “juvenile entertainer” which I enjoy as a description because the other performers are described as “Comedian from Dewsbury” or just “Comedian” or “baritone violinist”. So clearly she was known for being the youngest one on the bill.

There’s also a programme for The Nobodies, which was a troupe that Freda was a member of, and as far as I can tell, their specialism was hospital entertainment.

Leafing further through the photo album the consistent person who pops up all the time is Stanley William Milan.  who was a soldier from Doncaster who had been treated in a local hospital for a severe injury to his leg and invalided home.

There is a wonderful photo of him dressed up in a clown uniform, but he’s wearing a military cap and holding a swagger stick. The card says “I’m on the staff” so he was obviously very orientated towards the entertainment of troops. 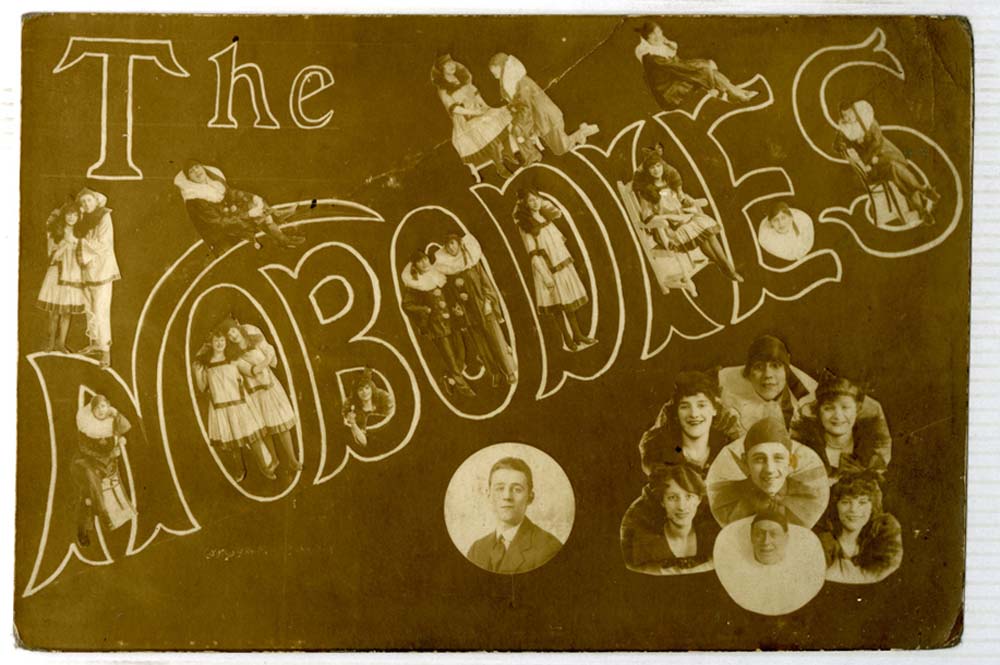 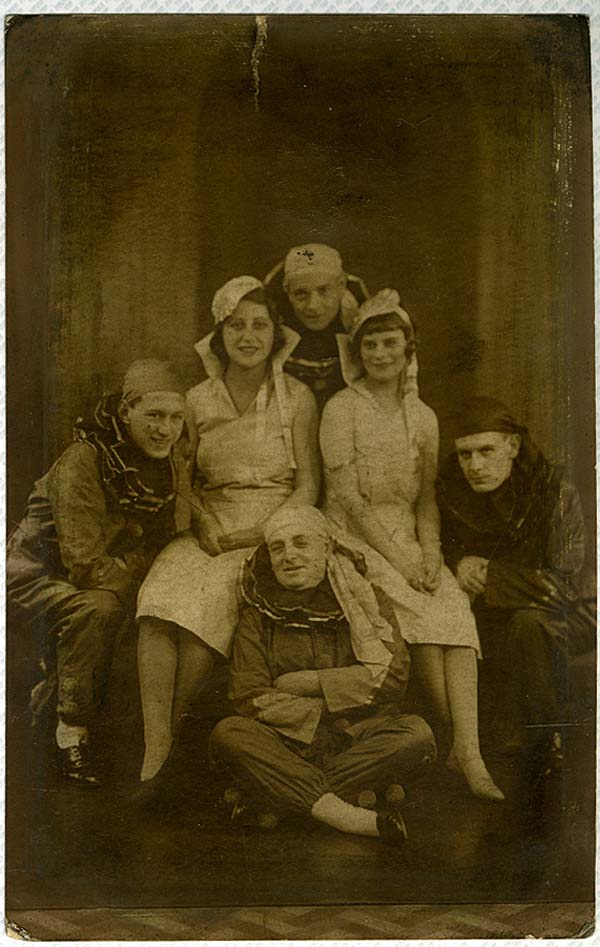 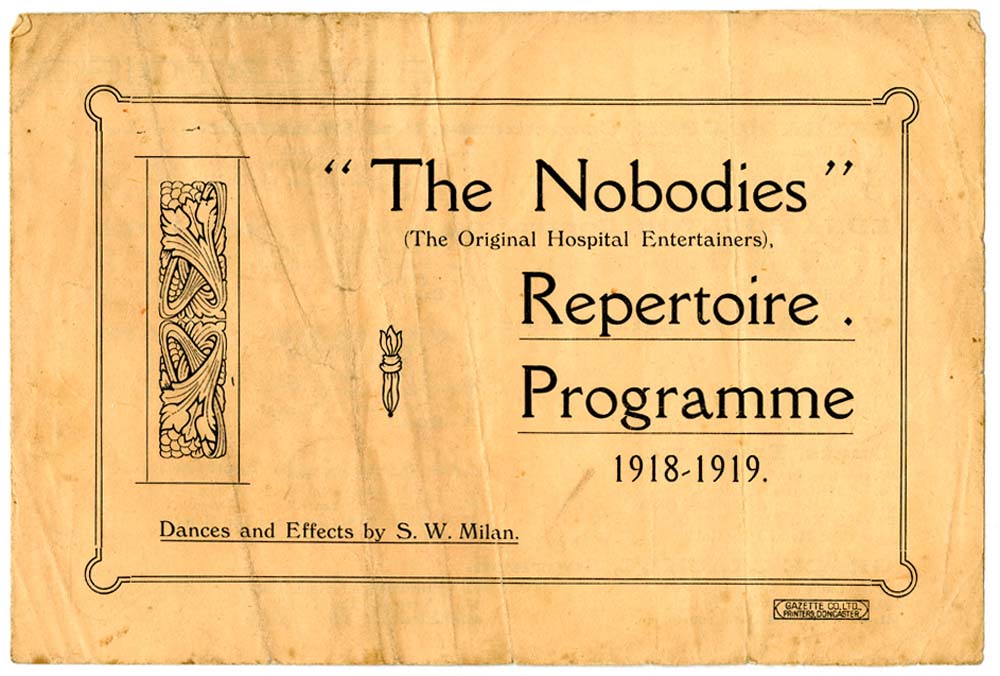 According to her son, Stanley became Freda’s song and dance duet partner and they worked together for many years.

The Nobodies seemed to have been organised by Stanley Milan and it really got me thinking about all the other women in the troupe. A lot of them looked very young ; they were teenage girls basically, running these entertainment shows in Doncaster for the troops.

“Miss Freda Hooper has sung, recited and danced in a manner worthy of the generous applause she received.”

The photo album also contains various different business cards for Freda, photos of her with other duet partners and at concert parties. She just lived and breathed entertainment; she was a singer, a comedienne, a compere, a dancer and after she married she set up her own dance school called the Kingsway Studios. She carried on teaching there for pretty much the rest of her life.

There are many programmes and cards for “The Kingsway Troupe” and “The Kingsway Varieties”, and she’s listed as the principal. My favourite one is a pink booklet, with press reviews on the back that reads: “Miss Freda Hooper has sung, recited and danced in a manner worthy of the generous applause she received!” So she was obviously very well-known in the area.

When she married, the newspapers reported on her wedding; one article said that she was offered the opportunity to become a child film star, but she turned it down. On the 1939 Register she’s actually listed as a Teacher of Dancing and when the Second World War broke out her students became the soldiers’ entertainers. So she followed that tradition of troop entertainment into her later life.

Freda was also close friends with Nellie Stagles, another well-known Doncaster dance teacher. Nellie was actually godmother to one of Freda’s daughters. On a personal level having grown up in the Doncaster dance scene and doing dance competitions since I was a kid, I know that everybody knew Nellie Stagles. In Doncaster we have a new theatre called Cast and the road that runs up to the back of it has been named Nellie Stagles Way, because she was so well known. 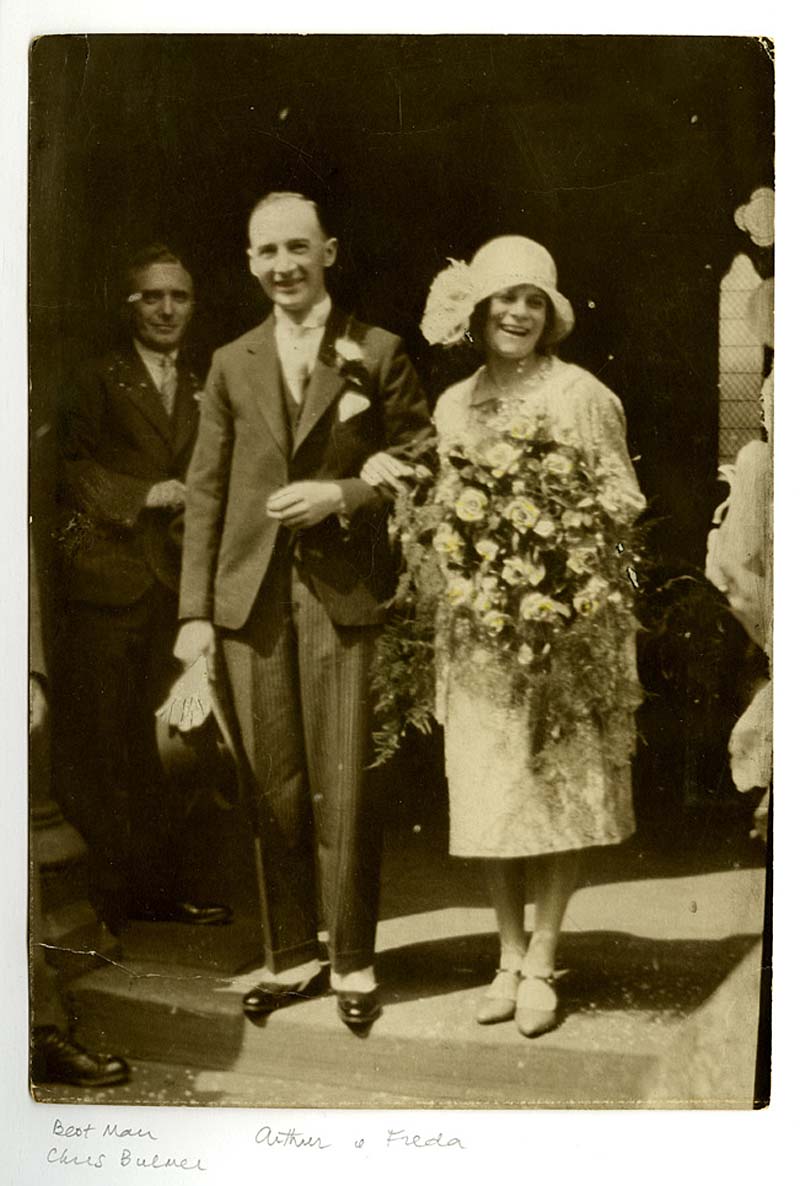 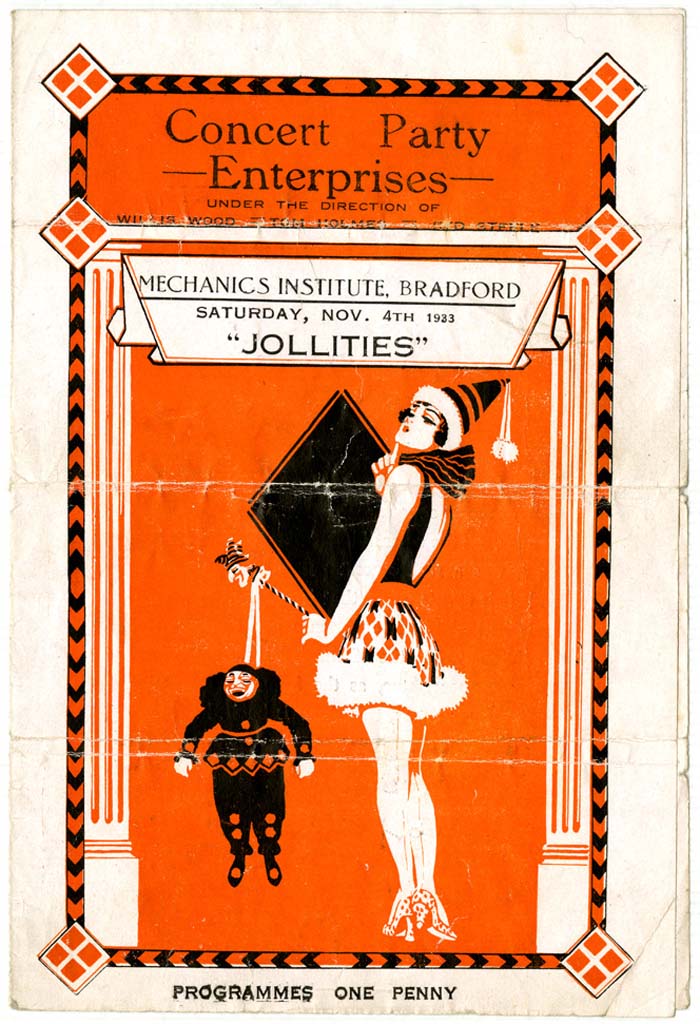 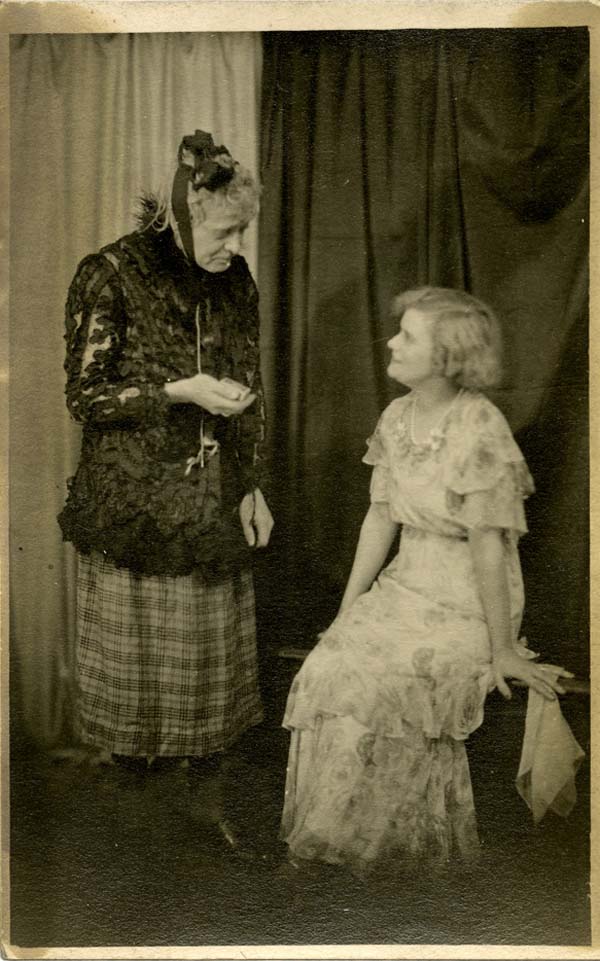 Chatting further to Albert, he said Freda used to run lots of different entertainment troupes. One of them was called the Jollities which I quite like. And then she died in the early 1970s when she was only 68.

She died relatively young, but Albert said that she carried on being involved in that local entertainment and dancing scene right up until the end. There’s a photograph of her when she’s an older woman, in the garden of her house, which is just lovely because you can just tell it’s her. Her face is just so recognisable. When you look at the photos when she’s an older woman you can tell that she’s a dancer, the way she just carries herself, it’s very indicative of her as an entertainer.

From a very personal perspective what I really love is the dancing costumes; they’re not that different to what I used to wear when I was a kid doing competitions and shows.

But my favourite photo is the one of Freda with her curly hair and white taffeta scarf around her shoulders. That was the photo in the Hooton Pagnell collection and I wonder if that’s the photo that she sold to raise the money to send those cigarettes and tobacco to be the troops.

To be honest we can’t be 100% sure that she was the one that did that cigarette fundraising, but I think there’s so much indicating that it was her. And when I said to Albert, “what do you think?” He said “That’s got her written all over it, that’s exactly something that she would have done.” 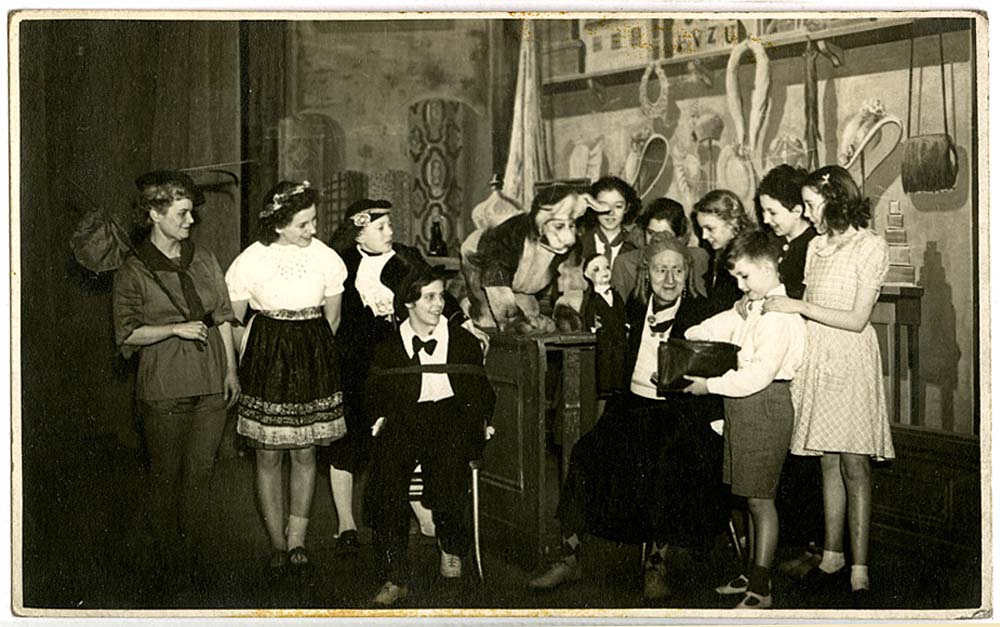 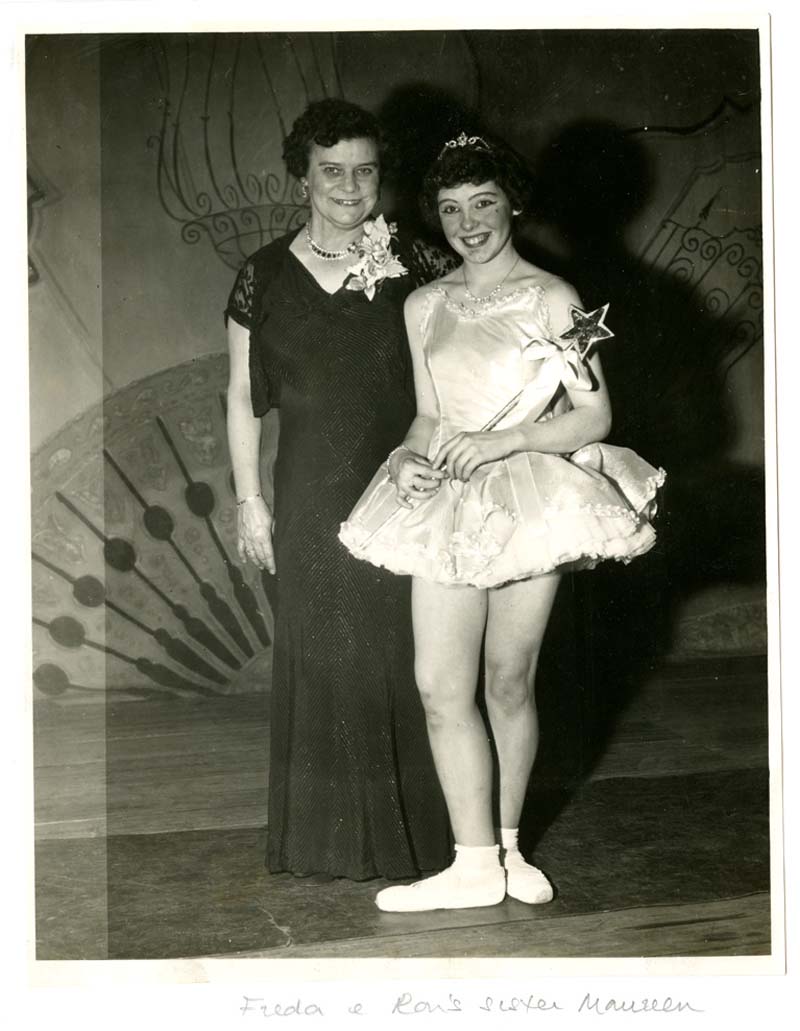 Freda as dance teacher with one of her pupils. Courtesy Doncaster Museum / Hooper Family 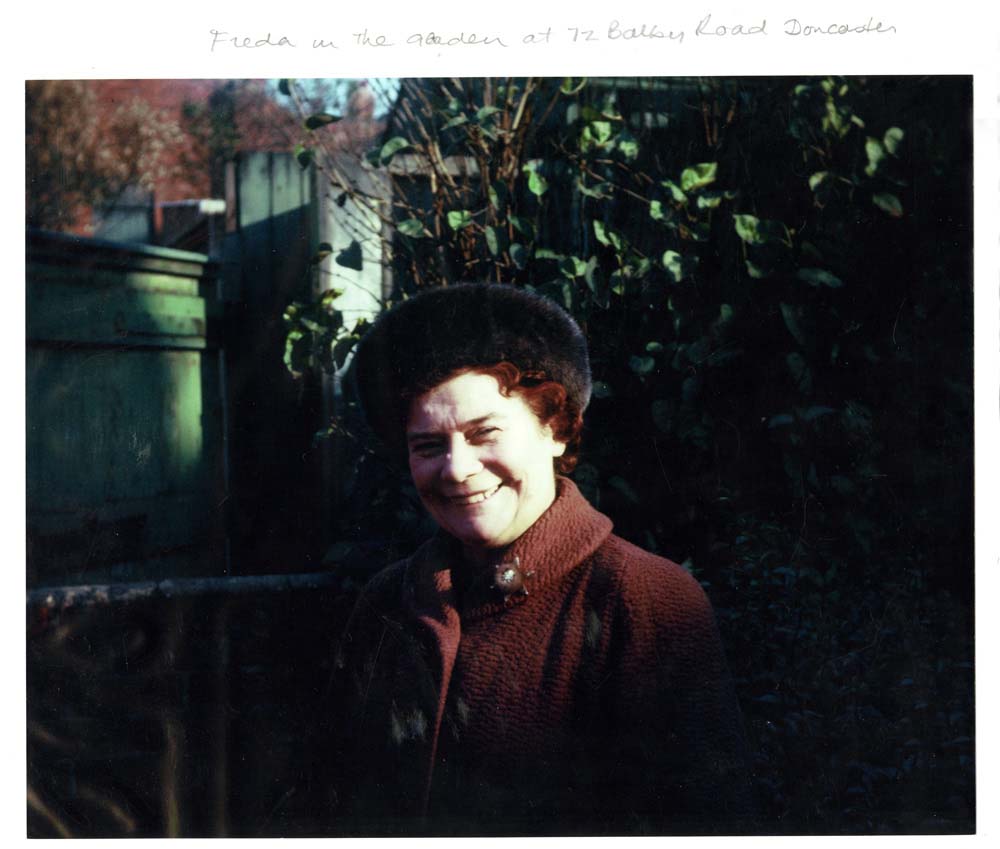 Doncaster 1914-18 was generously supported with a grant of more than £900,000 by the National Lottery Heritage Fund during the four-year project.

For Museums at Night on May 15 2019 internationally renowned singer-songwriters Findlay Napier, Greg Russell and Bella Hardy present an intimate evening of storytelling and song, inspired by stories from the Doncaster archives and Doncaster 1914-18. See the Museums at Night website for more details.

Doncaster Museum is full of exciting collections depicting various aspects of natural history, archaeology, and local history. Visitors are invited to take a journey around the museum by the ‘River and Road' route and discover the history of one of England's oldest towns. Our Museum Education service provides school workshops…