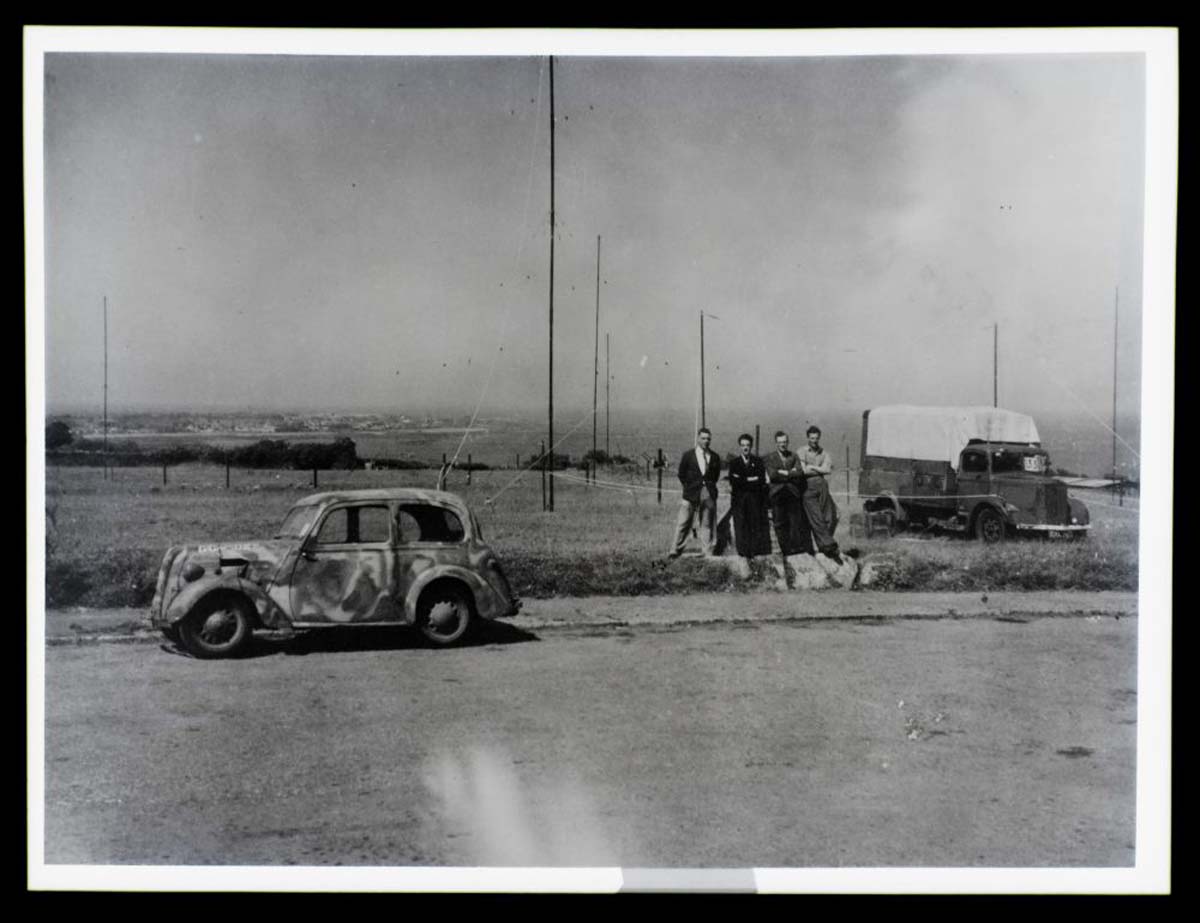 Anne Archer, Heritage Collections Manager at the BT Archives, on how a recent archives acquisition reveals the story of two telecom engineers trapped on the Channel Islands during World War Two

In July 1940, all communications with the Channel Islands ceased for the rest of the Second World War following the German occupation. Two telecoms engineers were stranded for the duration – one on Guernsey and one on Jersey. Some recently discovered papers, which have been donated to BT’s Archives, reveal what happened.

As war clouds gathered in 1939, communications between the Channel Islands, France and Britain were strengthened. It was known the islands were of great strategic importance, and once war was declared there was a frantic effort to complete the laying of a cable that would connect Dartmouth with Jersey, Guernsey and St Lo in France.

Submarine cables, completing the operation, landed in Guernsey and Jersey in May-June of 1940. Working on the islands at this time were eight Post Office staff, three on Jersey and five on Guernsey, partly needed to operate the 24 hour radio station.

The records show the events unfolding dramatically from the end of June 1940. Staff were evacuated from the islands, and only two remained: P.G. Warder in Jersey, and L. Le Huray in Guernsey. From the reports and letters, written by PO telecommunications staff on the mainland, we can trace what happened: 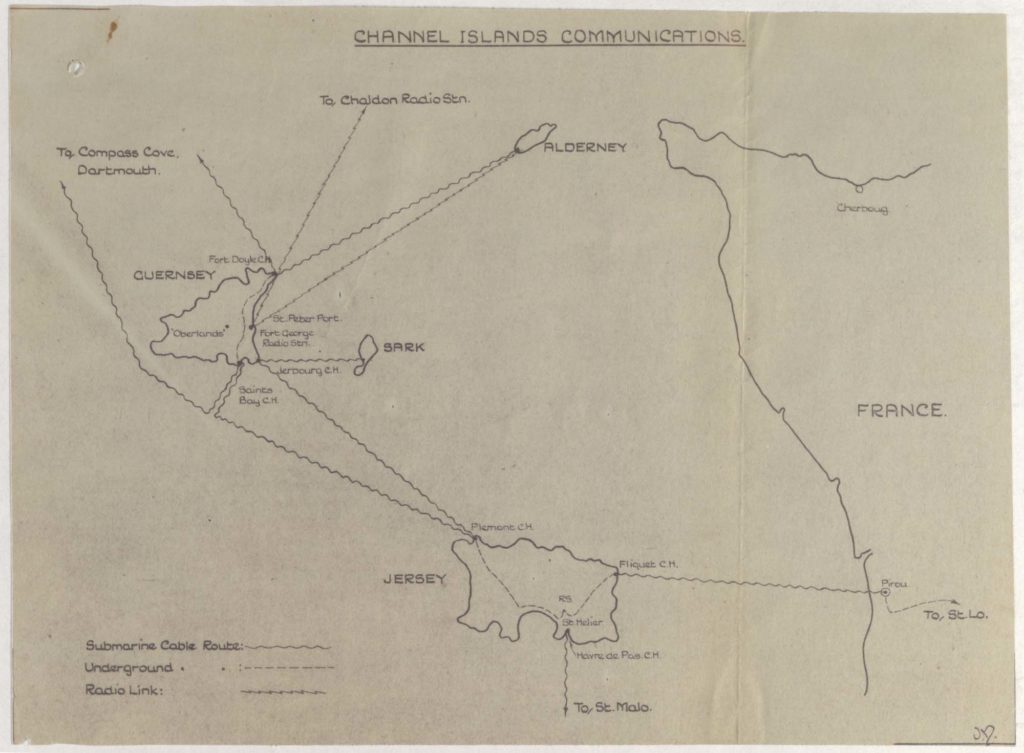 ‘Mr Le Huray Guernsey was spoken to at 10:45 today and stated that the position in Guernsey had become much more serious. German planes were now repeatedly flying low over the island and the population were in a state [of] alarm. Le Huray expressed a wish to be evacuated if possible.’

“These two men have fallen victims to their duty”

Urgent rescue mission by RAF launch and flying escort sent to the Islands, but failed to contact the men and returned – losing two pilots during an attack.

‘These two men have fallen victims to their duty; on two occasions they were instructed to leave the Islands by Headquarters…Each time the decision was reversed after representations had been made by the Island authorities; and finally they were trapped on the Islands by the enemy.’ 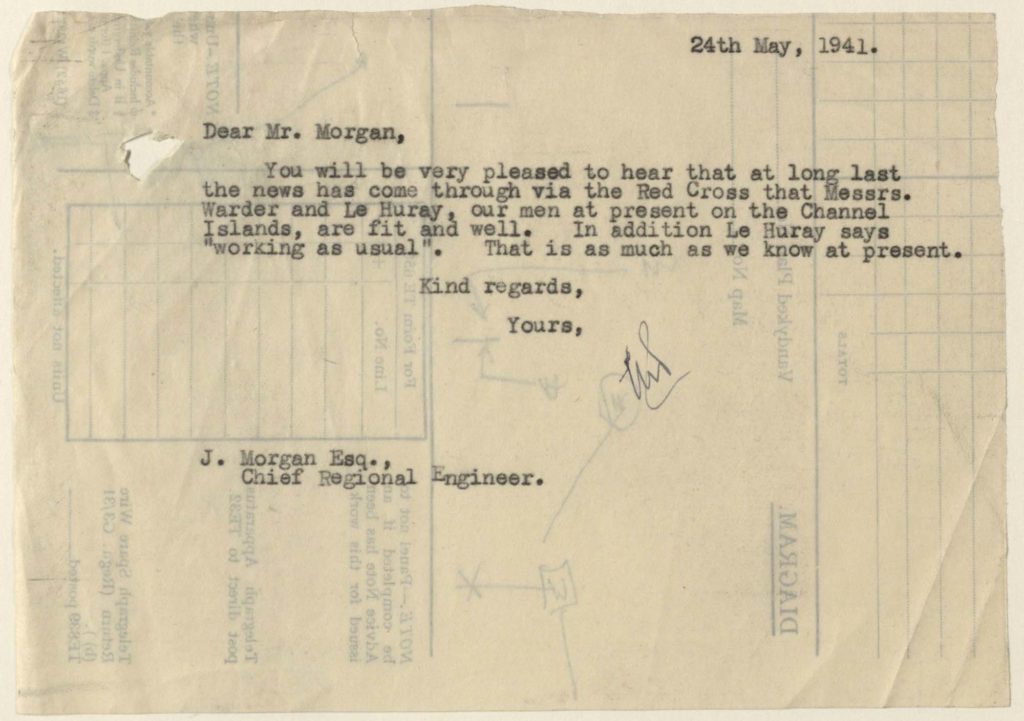 Note dated 24 May 1941 confirming that the two men stranded on the Channel Islands were well. Courtesy BT Archives

‘You will be very pleased to hear that at long last the news has come through via the Red Cross that Messrs Warder & Le Huray our men at present on the Channel Islands are fit and well. In addition Le Huray says “working as usual”. That is as much as we know at present’.

For the next three years, there was little contact. Then, on 12 July 1944, a slightly cryptic telegram dated seven months previous, and thought to hint at a hope that the climate of war might change, was received from Mr Warder:

On VE Day, 8 May 1945, although the islands hadn’t been officially liberated, Mr Warder went to the repeater station and told the guard he was taking over the building on behalf of the British Post Office. The officer clicked his heels, saluted and said, ‘Very good Mr Warder’. The liberation party landed at St Peter Port, Guernsey, on 12 May 1945.

The Chief Inspector’s report of 29 May 1945 comments on the health of the two men: ‘Mr Warder and Mr Le Huray have, definitely, had a rough and unpleasant time. Both have lost a considerable amount of weight but with the increased rations they are gradually improving.’ 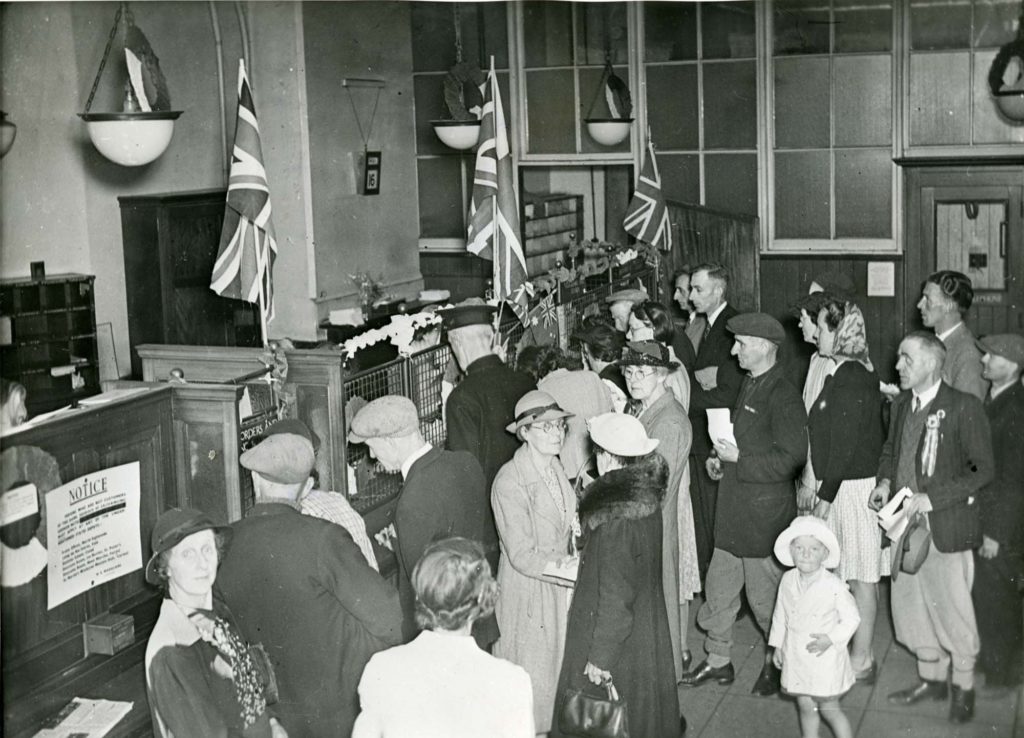 Le Huray’s report reveals that he was interrogated on several occasions by the Gestapo on the subject of transmitters, but was able to convince them that all transmitters on the island had been impounded by the British authorities.

Warder sent back a letter from Jersey asking for his wife to be transported to him at the earliest opportunity, and for some annual leave – as he hadn’t taken any for the past five years, he explained.

Mr Dickenson, the responsible officer for the Channel Islands, who had monitored progress of his two stranded staff, wrote a long report after the war. After five years of enforced absence, he ends; ‘the Islands are a charming place and I’m going back one day.’

BT Archives preserves and gives access to BT’s heritage, dating back to 1846. The Channel Islands papers were donated by a retired BT Engineer. The material had originally been stored in a BT exchange building in Bournemouth. Explore the BT Archives online.