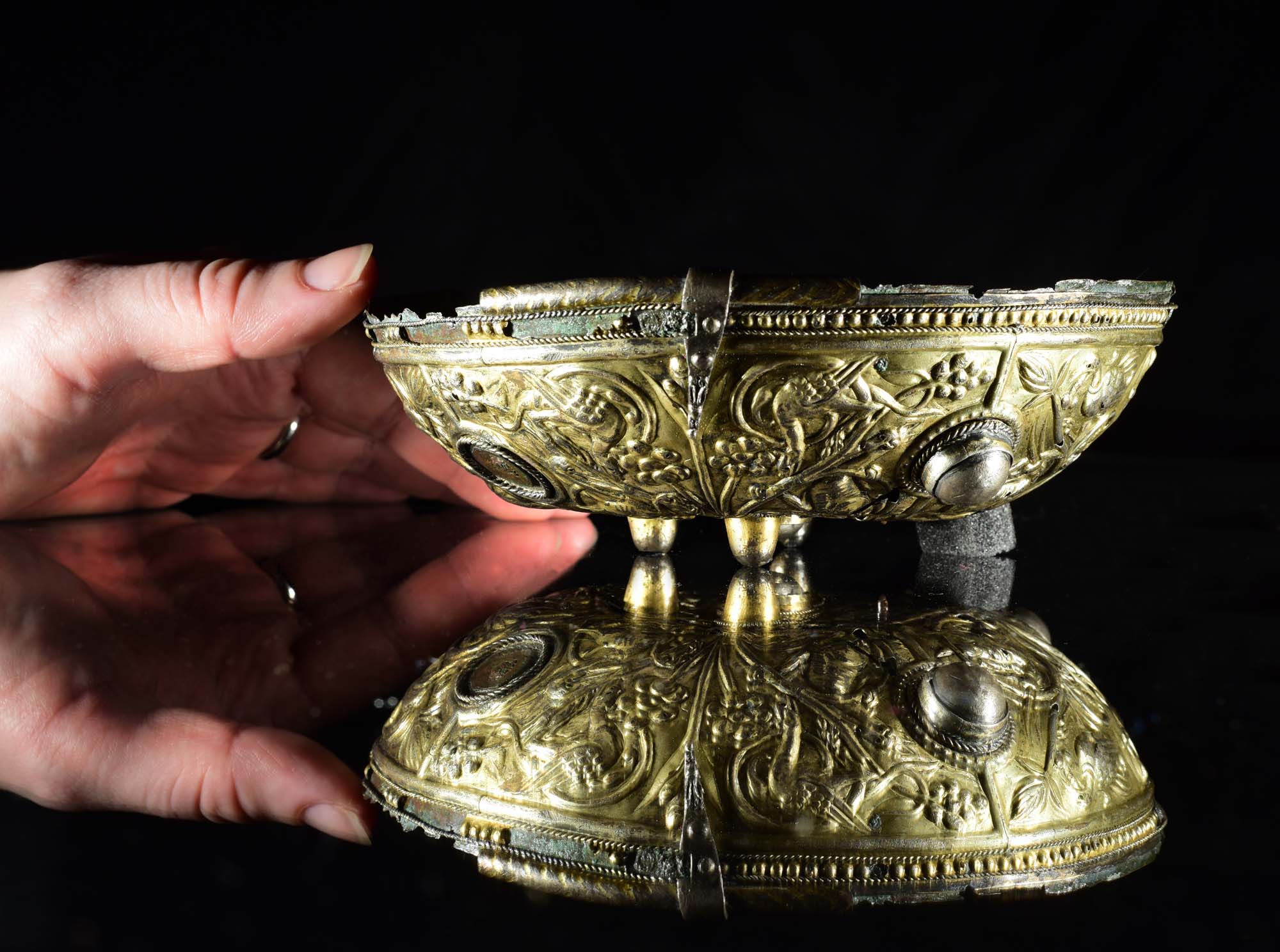 A major new exhibition by the Yorkshire Museum in partnership with the British Museum explores the world of the Vikings. Here are some of the treasures about to be revealed in Viking – Rediscover the Legend

Probably made in Trondheim, Norway, about AD 1150-1200, the Lewes Chessmen were discovered in a sand dune at Uig on the Isle of Lewis in the early 1830s. With enough pieces to furnish four chess boards, experts believe they were likely buried by a Viking trader on his way to Ireland.

They are made of finely worked walrus ivory and whales’ teeth in the forms of stylised seated kings and queens, bishops, standing warders and pawns in the shape of obelisks. This example is one of the knights on his mount. 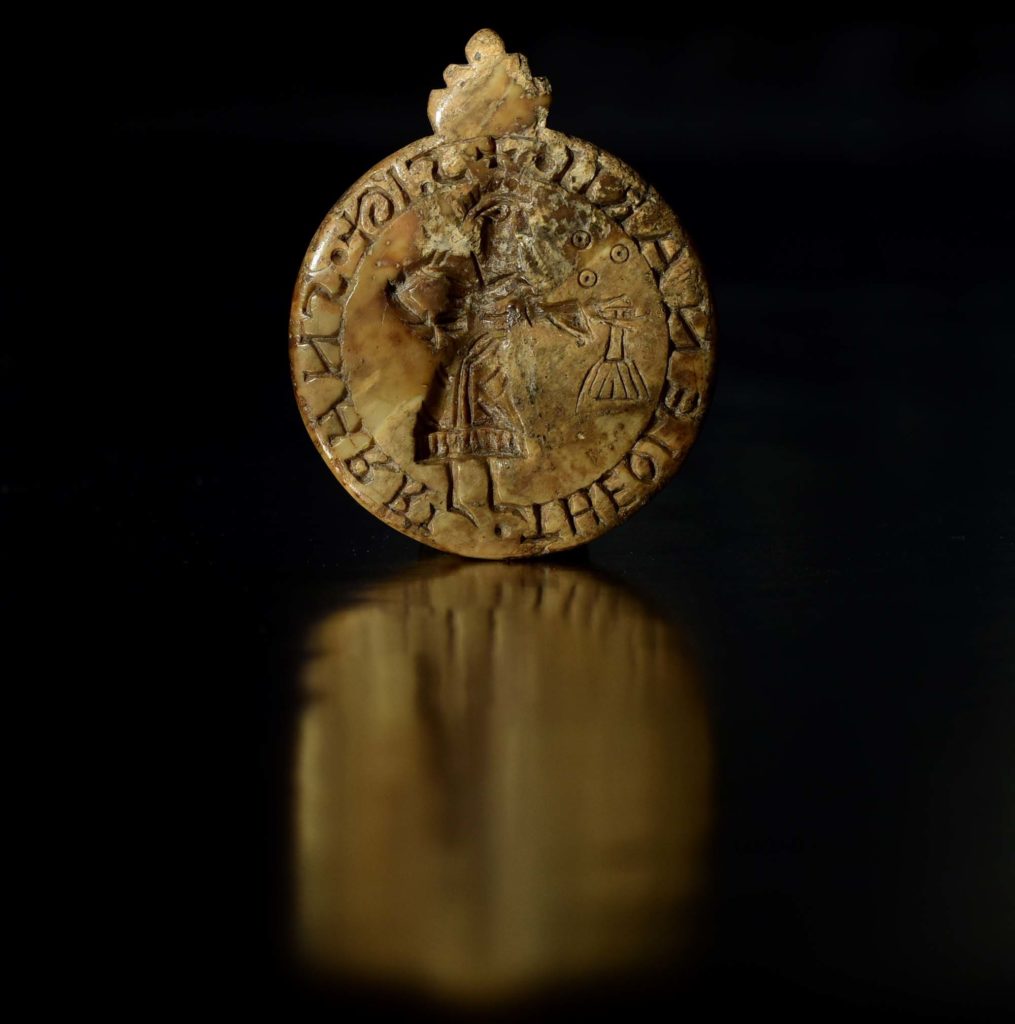 The ivory seal of tax collector Snarrus, which is the Latinised version of a Viking name that survived into the Norman period, shows Snarrus wearing a long tunic and dropping coins into his purse. The Scandinavian version of the name Snare or Snorri, which is known both as a forename and a nickname, means “shrewd”.

Dating to between 1100AD and 1199AD the seal, which is made of walrus ivory, suggests that Snarrus was a wealthy resident of early medieval York. The inscription around the edge translates as ‘The seal of Snarrus the toll collector’. The name Snarrus appears in York from the time of the Domesday Book (1086). 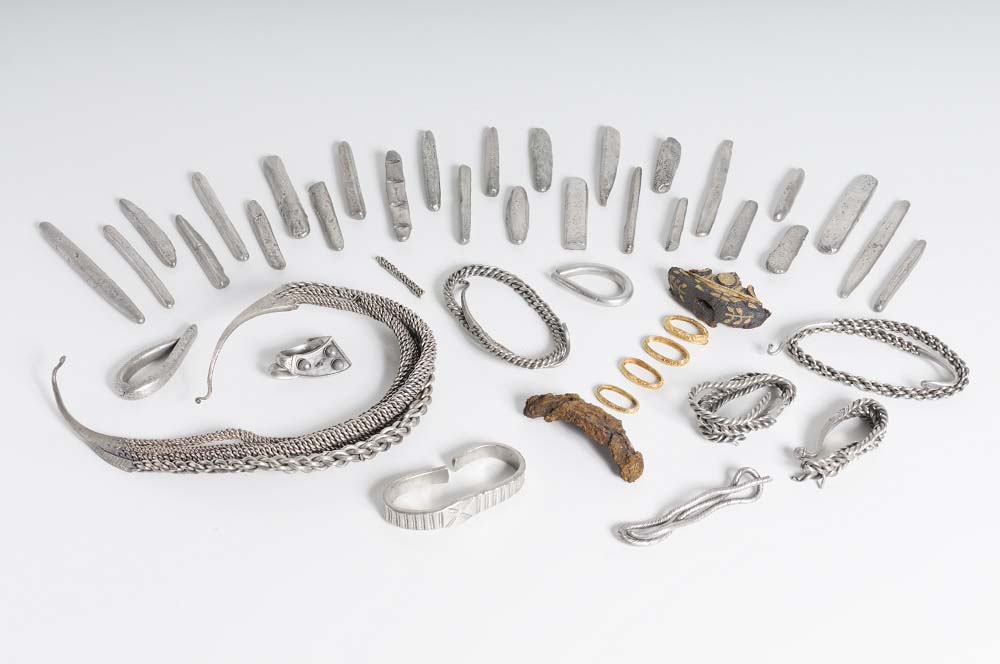 A hoard of 48 silver and gold items dating from the late 9th to early 10th century AD, experts believe the Bedale Hoard belonged to a wealthy Viking as it includes necklaces, arm-bands, a spectacular sword pommel, hacksilver and ingots.

Close inspection of the twisted neck rings shows how one has been halved into “hack silver”, with the split revealing an unusual west Viking variant. The hoard also contains a Permian ring of Russian design and a flat arm-ring made by Vikings in Ireland using a Hiberno-Scandinavian design.

The Cuerdale Hoard ® The Trustees of the British Museum

This massive hoard of more than 8,600 items, including silver coins, English and Carolingian jewellery, hack silver and ingots was discovered on a river bank near Preston Lancashire in 1840. Experts believe the Hoard was buried between 903 and 910 by Vikings retreating from Dublin.

It contains coins from three sources; the majority come from the Viking kingdoms of eastern England with others from Alfred’s Kingdom of Wessex as well as Byzantine, Scandinavian, Islamic, Papal, North Italian and Carolingian mintings. This has led to conjecture that they are the plunder from the Viking raids of 898. 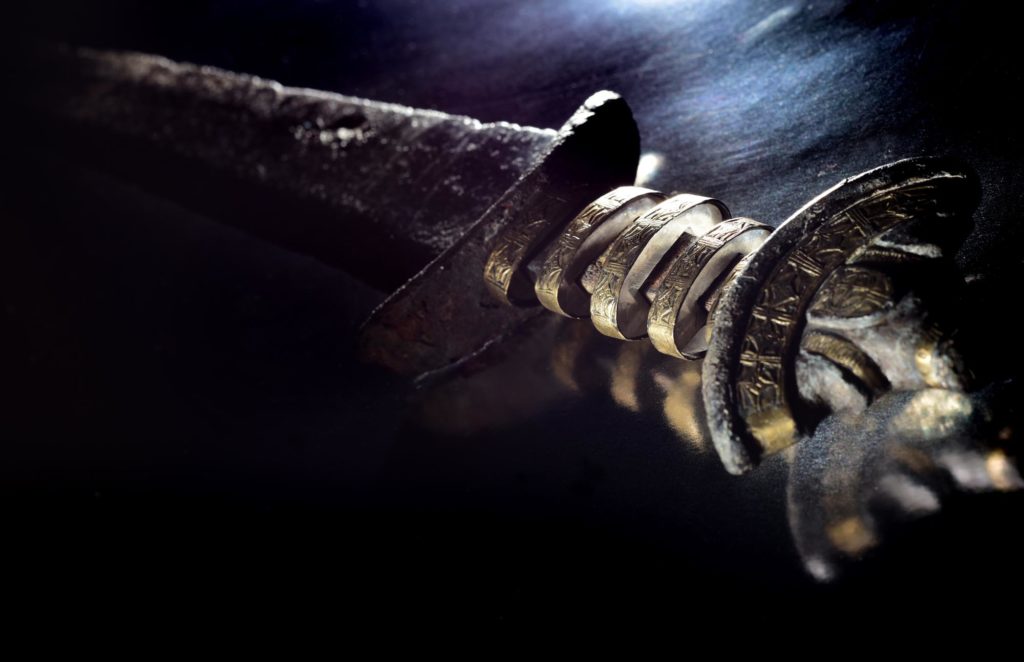 Spotted by a nine-year-old boy playing in a stream near Richmond in Yorkshire in 1976, this two-edged Anglian sword of iron dates from the ninth century and boasts a handle decorated with silver with a combination of geometric and plant designs.

Anglian and Viking warriors were often buried with their swords, and a number of them have been discovered in Viking burials in North Yorkshire. Other swords of this date have also been found in rivers and it is thought that weapons of defeated armies may have been thrown into them. 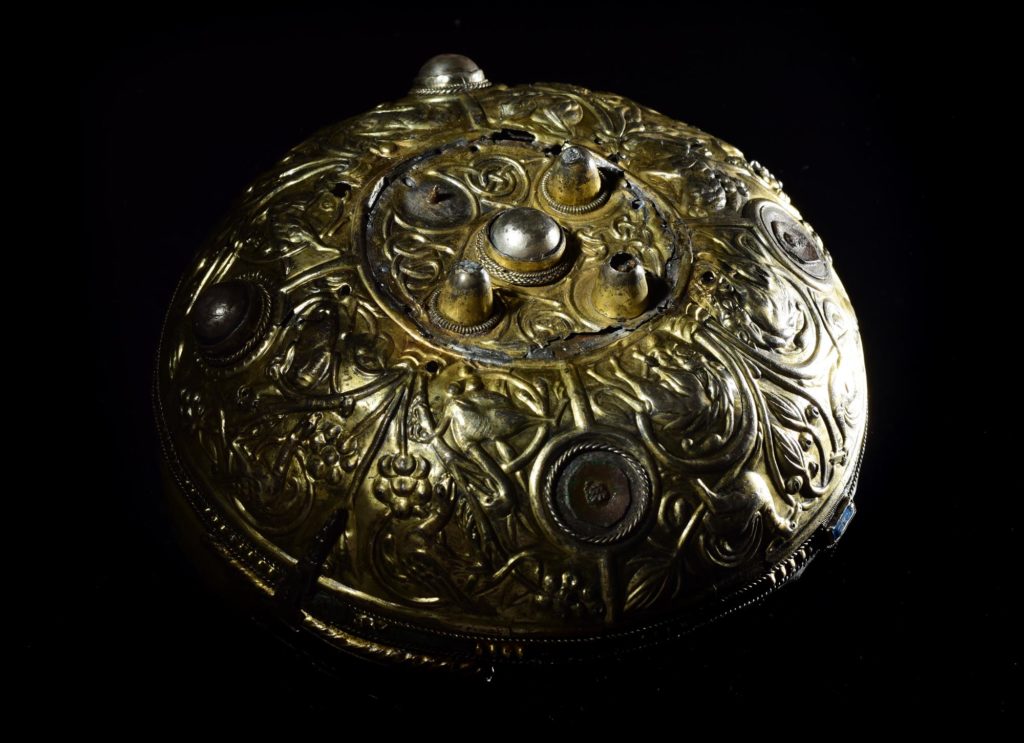 Made from gilt-bronze and riveted with studs of blue glass and silver with an internal bowl featuring 16 circular pieces of glass within a ring of cloisons, the Ormside Bowl dates to the mid-8th century and is an Anglo Saxon made object.

Although the circumstance of the find in 1823 are not very well recorded, it was discovered in a churchyard in Great Ormside, where the grave of a Viking warrior was also discovered. One theory goes that the bowl was looted from York by the Viking warrior and then buried with him in his grave.

The Raven Penny ® The Trustees of the British Museum

This penny bearing a raven image is from the reign of Anlaf Guthfrithson, a member of the Norse-Gael Uí Ímair dynasty and King of Dublin from 934 to 941. He succeeded his father, Gofraid ua Ímair, who was also briefly king of York in 927 but was expelled in the same year by king Æthelstan of England.

Minted between 939-941 it bears the inscription “King Anlaf” in a version of Old Norse rendered in Latin. The use of Norse language and the raven image, associated with the Norse god Odin, are said to be strong indications that the Vikings were declaring their independence in the British Isles at this time.

The Vale of York Hoard 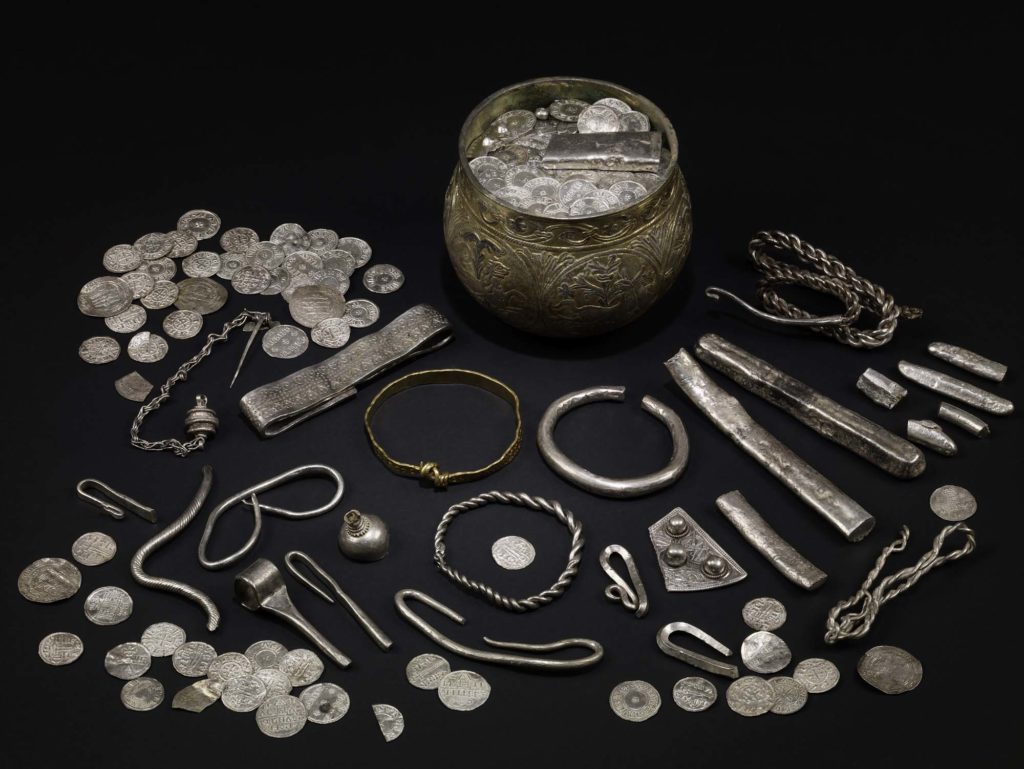 This 10th-century Viking hoard of 617 silver coins and 65 other items, found near the town of Harrogate in 2007, is one of the most important finds of its type in Britain since the Cuerdale Hoard was discovered in Lancashire in 1840.

The most spectacular single object is the gilt silver vessel, made in what is now France in the first half of the ninth century. It was apparently intended for use in church services, and was probably either looted from a monastery by Vikings, or given to them in tribute. As well as the coins the container also held a gold arm-ring, complete ornaments, ingots (bars) and chopped-up fragments of hack-silver. 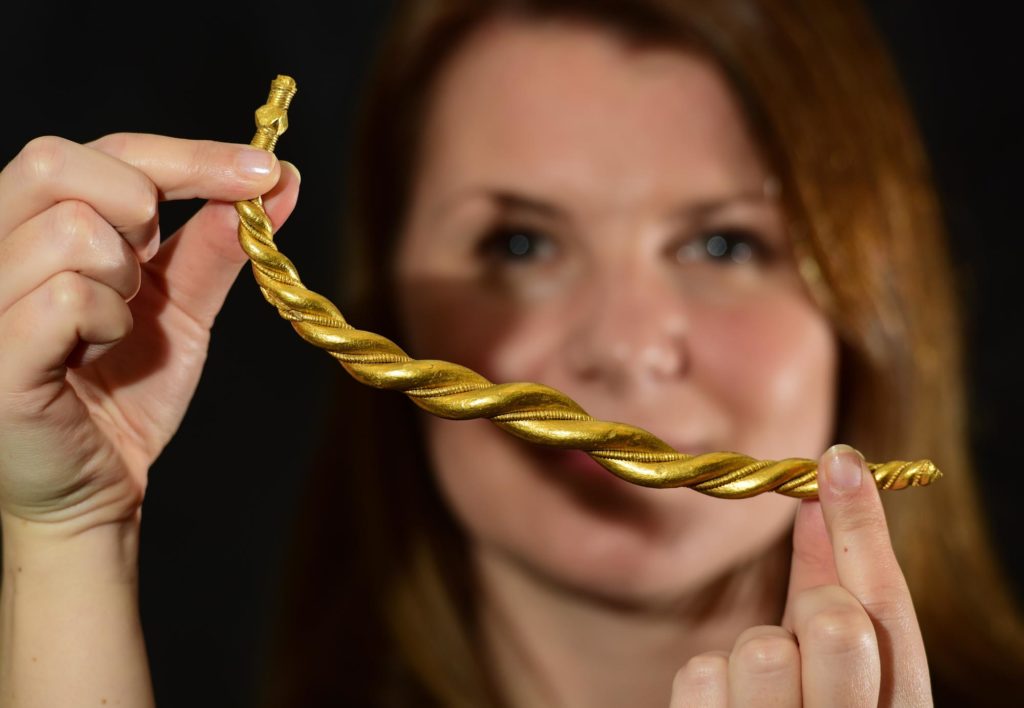 Made of 95% gold and weighing over 300 grams this gold arm ring was discovered in the possessions of a York builder after his death. Brought to Yorkshire Museum by his children it was declared treasure and purchased by the museum in 2006.

Comprising three strands of intertwined gold, the bracelet dates from the ninth or tenth century and would have been worn on the arm to show the wealth of the owner. Vikings may also have cut such pieces of jewellery up into pieces to use as currency – and would have buried them at times of danger. 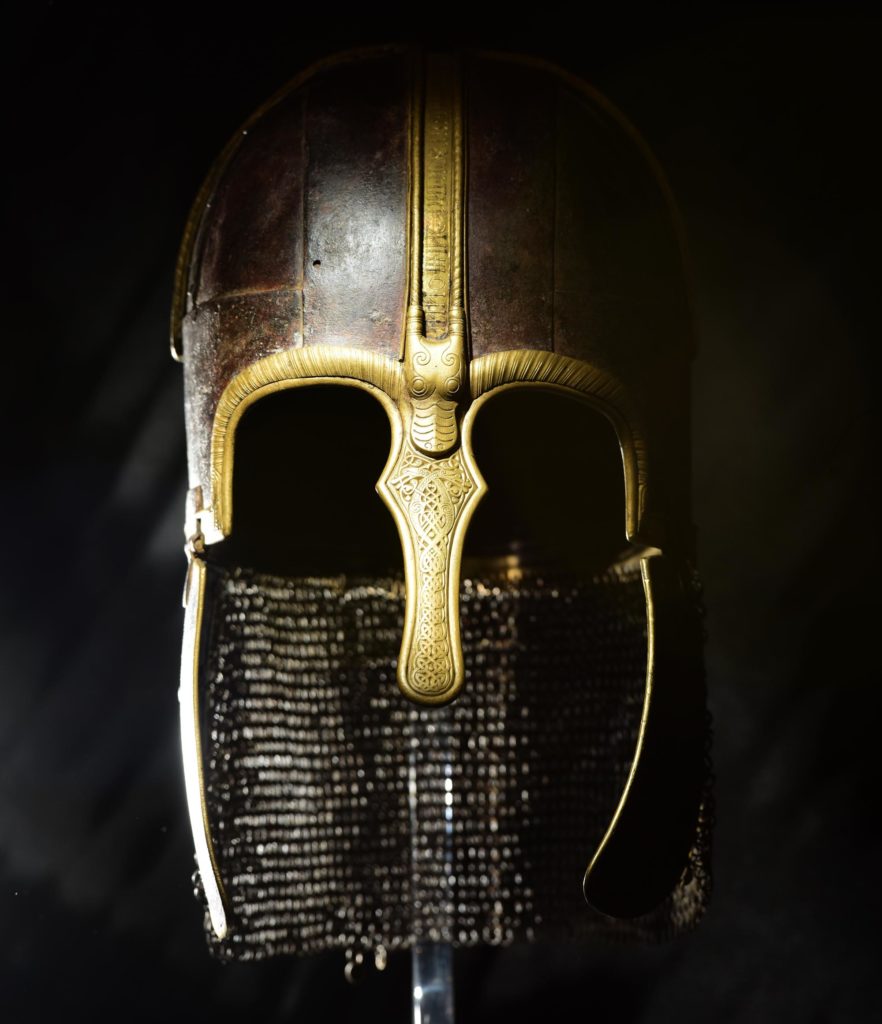 The helmet was in a wood-lined pit together with fragments of antler, stone, glass and iron, close to the site where archaeologists had earlier found the remains of Viking settlers. Made of iron and copper alloy, it dates to the second half of the eighth century and is stylistically Northumbrian with many unique details.

Viking – Rediscover the Legend runs from May 19 – November 5 2017 at Yorkshire Museum. It then tours to the University of Nottingham Museum; The Atkinson, Southport; Aberdeen Art Gallery and Norwich Castle Museum.

The Yorkshire Museum sits in the heart of York Museum Gardens, in the centre of York. The museum was opened in 1830 by the Yorkshire Philosophical Society and was one of the first purpose-built museums in the country. Housing some of the finest collections of archaeological and geological finds in…