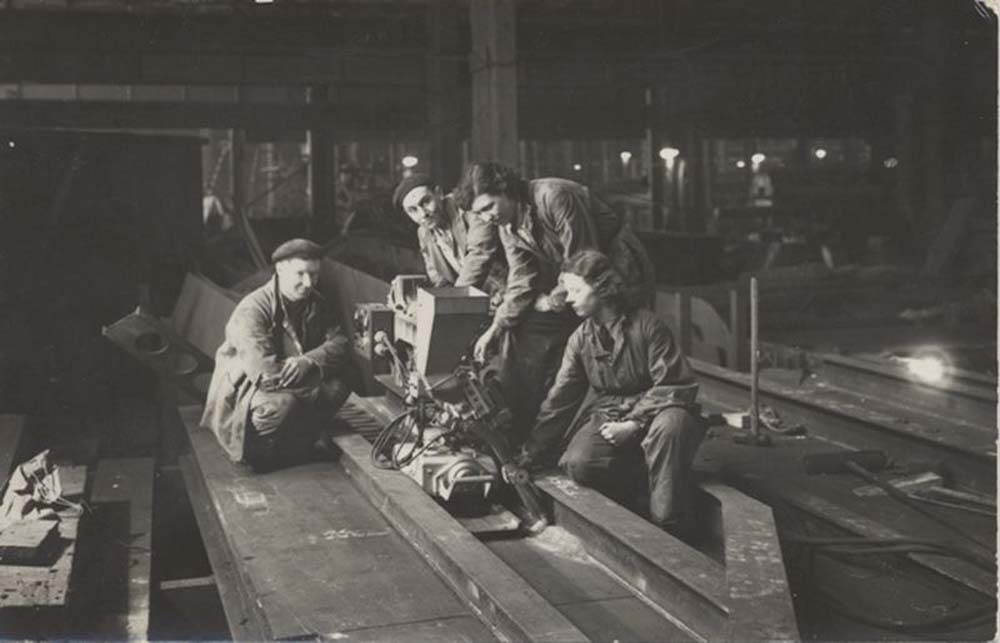 For centuries, the sea and the life of a sailor was seen as a male domain and women were not integrated into the Royal Navy as fully fledged sailors until as late as 1993.

However, during the Age of Sail an astounding number of women did go to sea in warships and the Napoleonic period is awash with real life stories of stowaways, transvestism, and a crew of extraordinary women who set sail into a male dominated world.

These and other stories abound in this rich exhibition at Chatham Historic Dockyard which also reveals the behind-the–scenes stories from the pioneering female workers of the Dockyard’s own Spinning Room and Sail and Colour Loft.

The exhibition uses a mixture of photographs, fascinating archive materials, extraordinary objects and soundscapes to challenge preconceptions and reveal the variety of roles women have played on land and at sea. 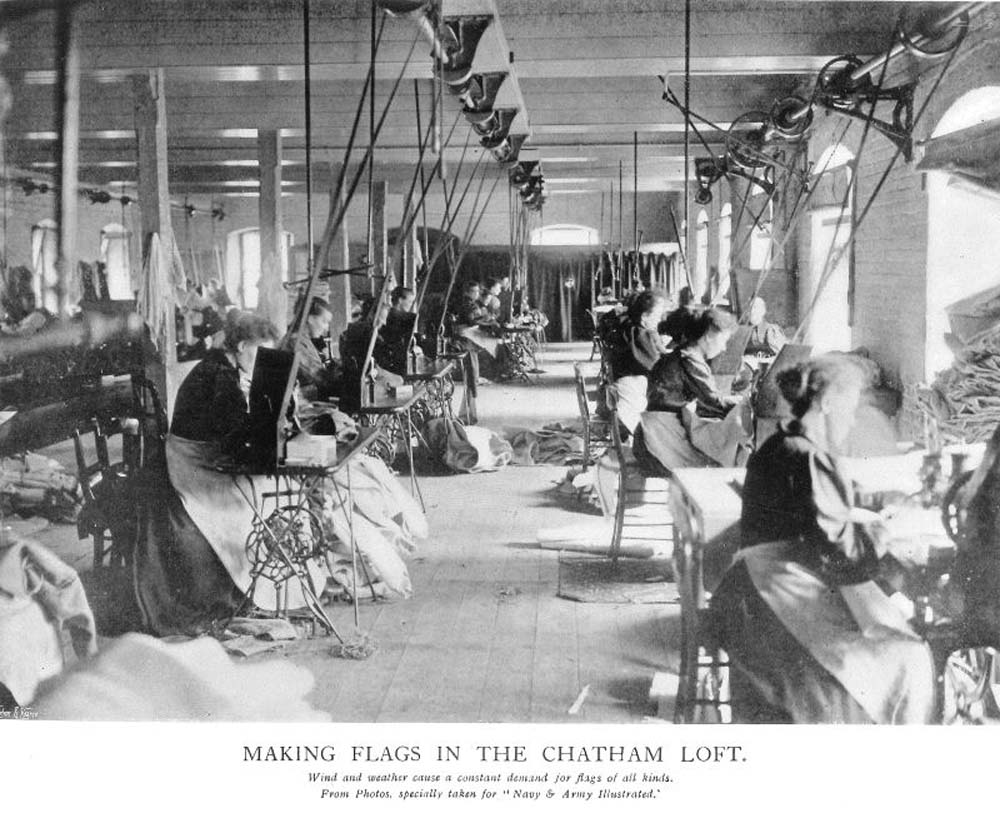 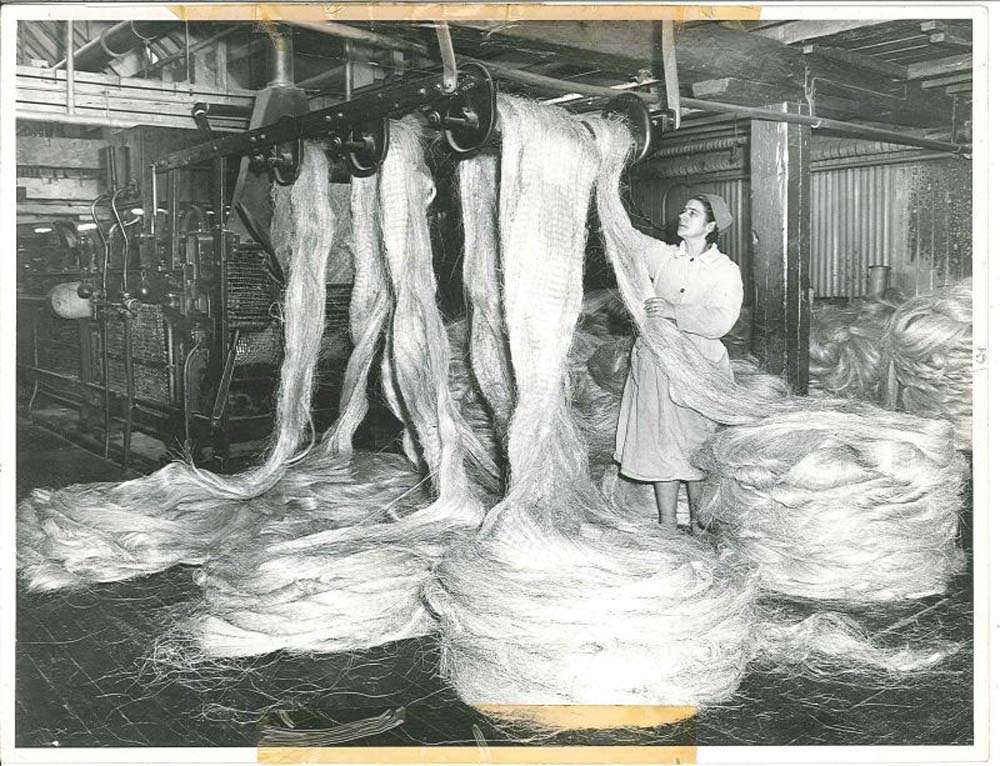 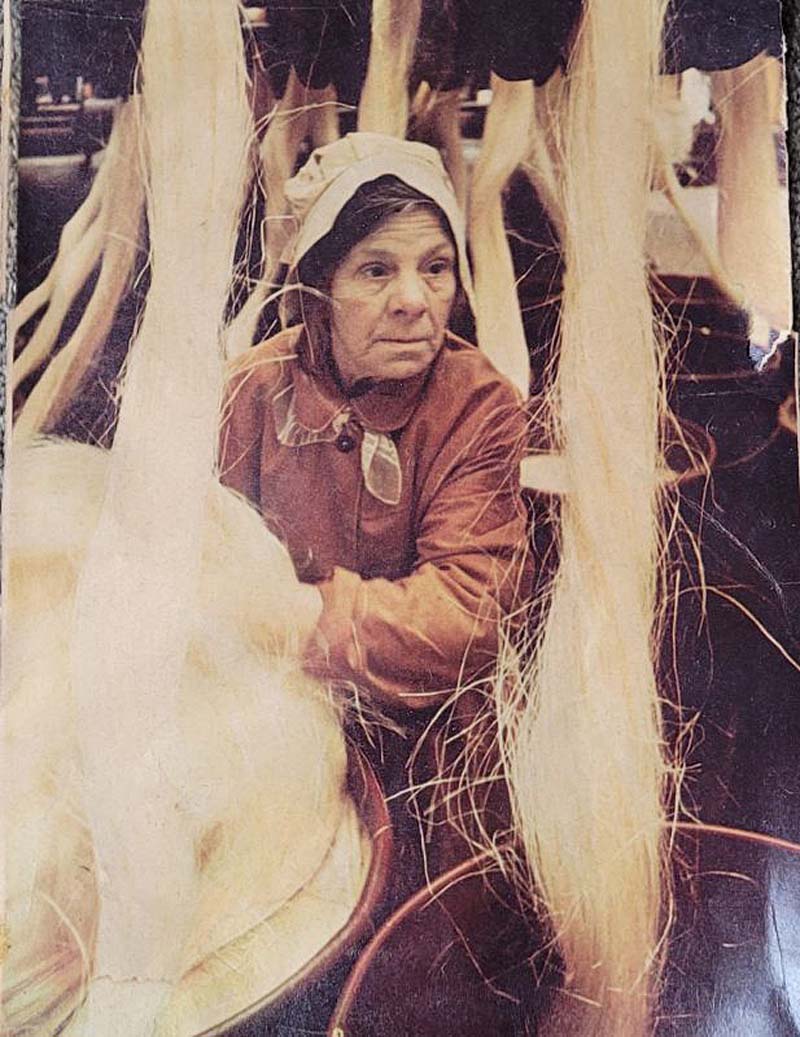 Inside the ropery. Courtesy The Historic Dockyard Chatham

Chatham Dockyard has its own stories to share about the changing role of women at work; as far back as 1803, facing a shortage of skilled men after fighting the French Revolutionary War (1793-1803), the Royal Navy Board granted permission for women to be recruited to help the Dockyard’s workforce repair ships’ flags that had been damaged in the conflict.

Six ‘colour women’ were initially employed to make signal colours from old material, and in 1806 the first Union Jack flag was sewn at Chatham.

By 1816, following the conclusion of the Napoleonic Wars, their contribution to Britain’s war effort was deemed (albeit patronisingly) ‘unproblematic’ and ‘nimble fingered’, while they were also ‘more contented with their pay’ than their male counterparts. Consequently, women received permanent employment, pay above that of a labourer and their numbers quickly expanded.

The women initially worked 12-hour days in the Sail and Colour loft, from ‘Breakfast time to Bellringing Nights’, with half an hour break for lunch.

However, despite being recommended to join the men in the Ropery in 1810, it was not until 1864 – and the mechanisation of the spinning process, which made the work less arduous and ‘suitable for women’, that they were given the opportunity to become rope makers.

At its height 120 people were employed to work in the Ropery, but today just eight people maintain this tradition in the Royal Navy’s sole surviving Ropeyard. 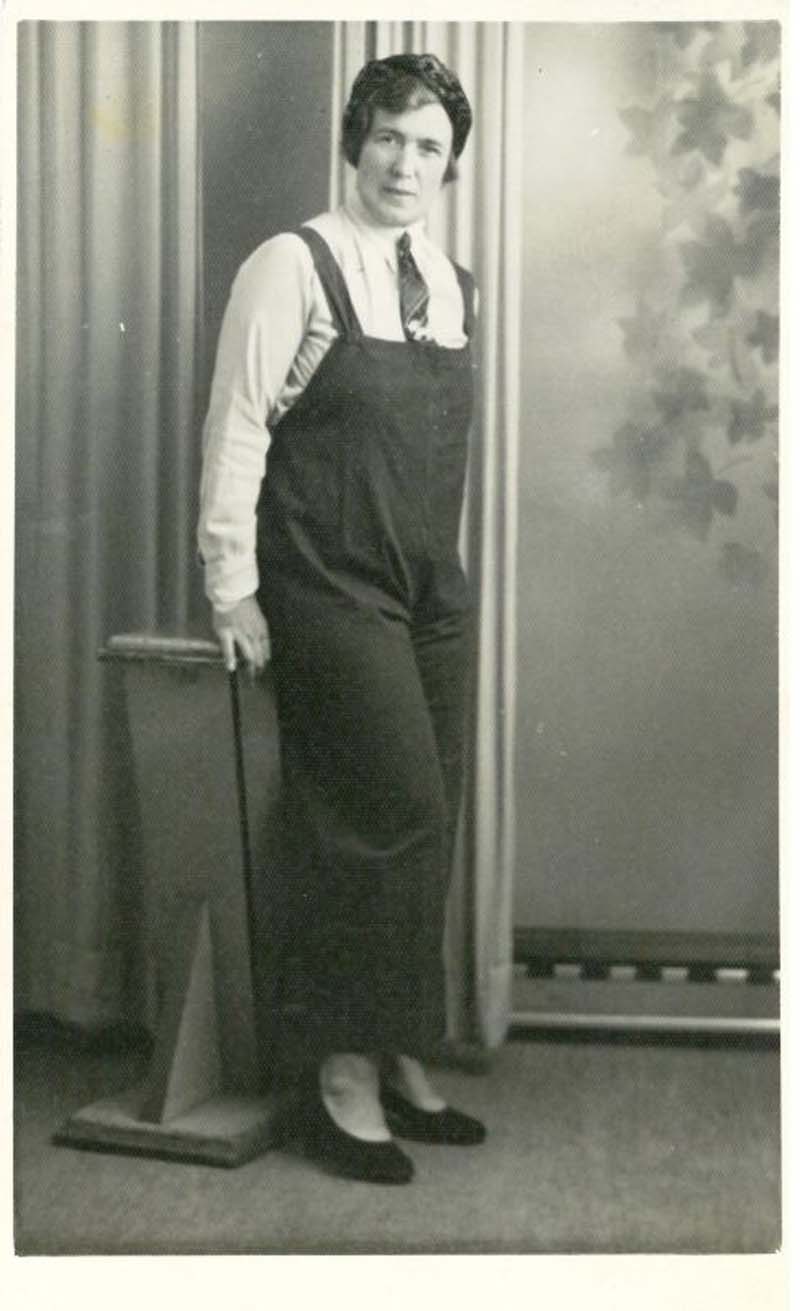 Constance Huggett was one of many women drafted in to replace the men during the First World War. She first worked in the No.5 Machine Shop. Courtesy The Historic Dockyard Chatham 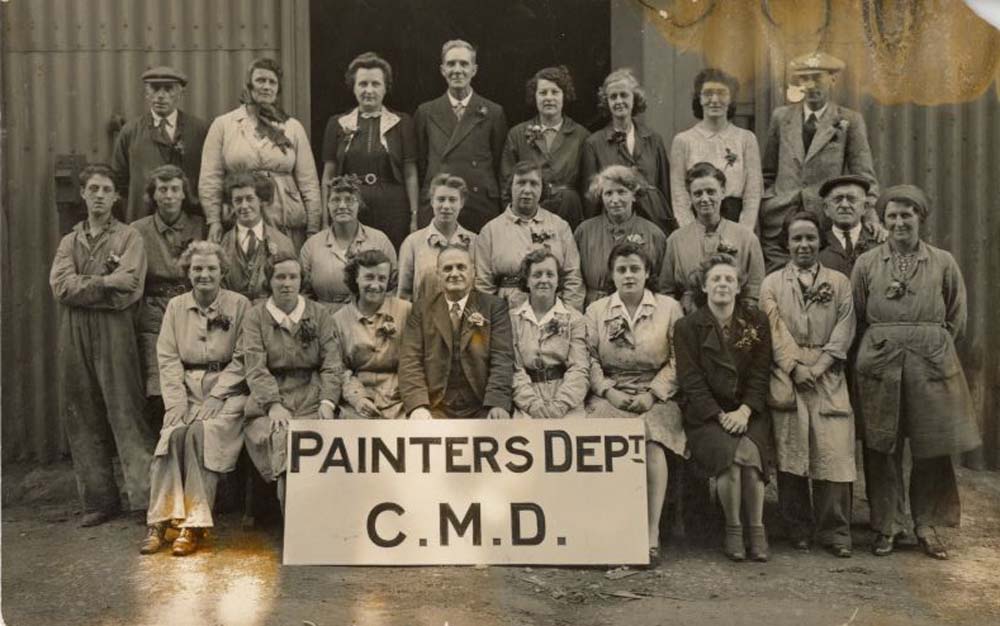 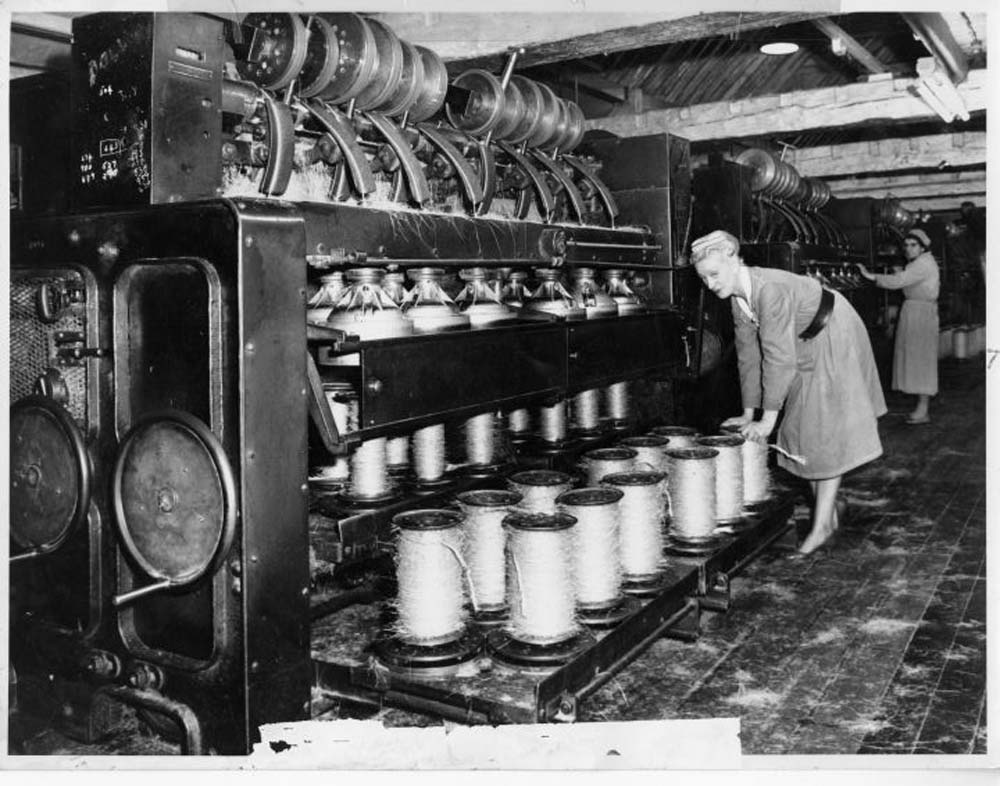 Inside the spinning room of the ropery (post war). Courtesy Historic Dockyard Chatham

During the Victorian era, the Admiralty was concerned about preserving the women’s moral welfare and went to great lengths to keep the sexes apart in the Dockyard.

A new staircase was built, a separate mess room created, and the women’s working day was half an hour different to the rest of the dockyard. However, despite these efforts many romances blossomed, although if a woman decided to marry a colleague she faced being sacked.

The First World War (1914-18) saw the lives of women again overturned, as they replaced men in the workplace to support the war effort. At Chatham, women were employed in warship construction and repair for the first time. Although dockyard workers were protected from conscription, such was the social pressure – and during its early stages, the zeal – to ‘fight for King and Country’ was strong, creating the need for 2,000 women to fill a multitude of roles.

By the time of the Second World War (1939-45) severe labour shortages meant women were actually conscripted to work in industry, or in the auxiliary services, from December 1941. Even more women joined the dockyard workforce.

However, it was not until 1971 that the Dockyard employed its first female apprentice, Zandra Bradley.

Zandra had initially been rejected when she applied to become an apprentice engineer, instead being recommended to join the clerical department. Undeterred, she persisted and attended night school to ensure she would pass the entrance exams. Her perseverance paid off and she eventually joined the Dockyard as an electrical fitter.

She later transferred to a technician apprenticeship but as pictures from Periscope, the Dockyard newspaper, attest, she and another Dockyard colleague, Linda Brown (who today is a Learning Facilitator at the Historic Dockyard) were something of a novelty in the 1970s. Zandra is photographed wearing a short dress posing with a huge wrench on board a Royal Navy warship.

The exhibition concludes with memories of the Dockyard’s sad closure in 1984, and with it the end of over 400 years of shipbuilding and naval tradition for both local men and women.

Zandra Bradley as she appeared in the Dockyard newspaper Periscope in the 1970s. Courtesy Historic Dockyard Chatham 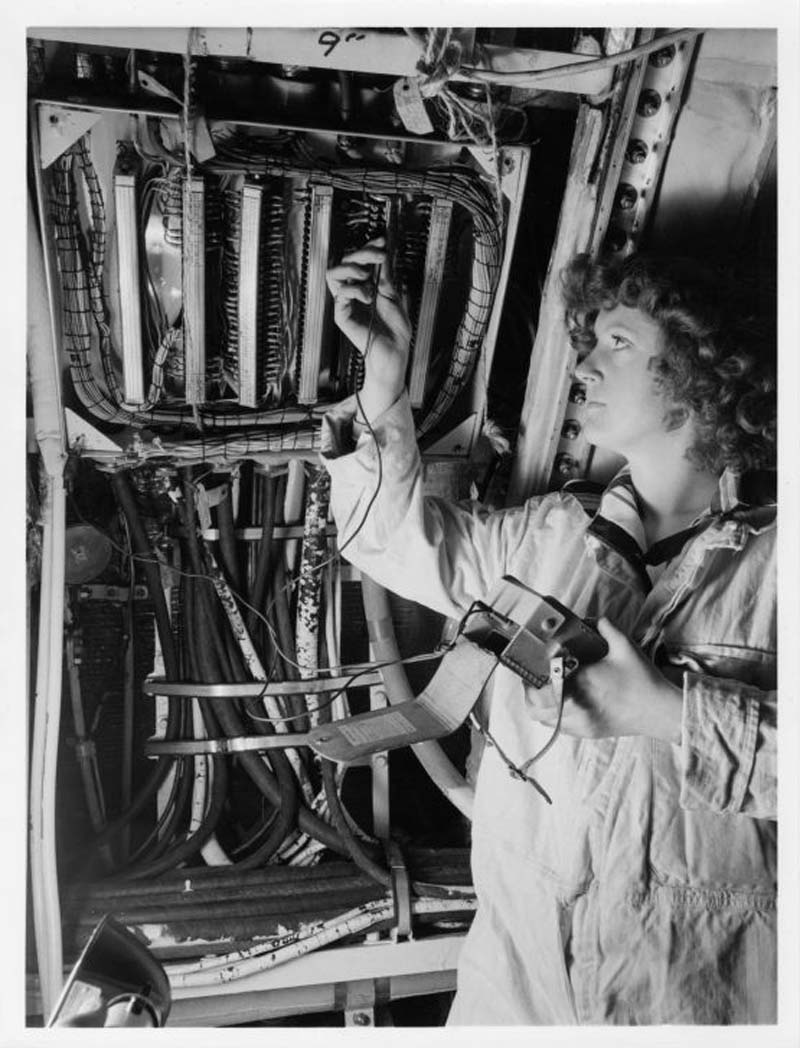 Recent years have seen a proliferation of stories emerging from the archives about female sailors and their adventures – often dressing in men’s clothes and working alongside sailors for months, sometimes years, without revealing their gender. Others were the wives or girlfriends of the captain or other officers.

Reporting on the Bombardment of Algiers of 1816, Admiral Edward Pellew, Viscount Exmouth wrote: ‘British women served at the same guns with their husbands, and during a contest of many hours, never shrank from danger, but animated all around them.’

Indeed, wives were regularly present during naval battles, taking on the strenuous and nerve-wracking role of carrying powder to guns and nursing the wounded.

It is thanks to the letters of Fanny Palmer Austen (1789-1814), wife of Captain Charles John Austen – the youngest brother of novelist Jane Austen – that we have a series of rare and honest accounts of what it was to be a young wife living at sea with her daughters.

Fanny often sailed with her husband whilst he served on the North American Station of the British Navy and later lived with him onboard the 90-gun Namur when stationed off Sheerness, Kent as the Napoleonic War drew to an end.

A fascinating insight into the role of women and upper middle class life at sea, it emerges that the Austens took servants on board with them, redecorated and converted Charles’ quarters into a home and that Fanny embraced the new challenge of household management, education and nurturing her children.

In some ways mirroring the lot of a Regency lady on land, it appears she spent her time furnishing the cabins, finding the best sources of food, planning meals, keeping the accounts, undertaking needle work, and occasionally attending formal dinners with the ships’ officers in the wardroom.

The letters also reveal a close connection to her literary sister-in-law and it is thought they were an inspiration for the naval wives in Jane Austen’s novels, notably in Persuasion. 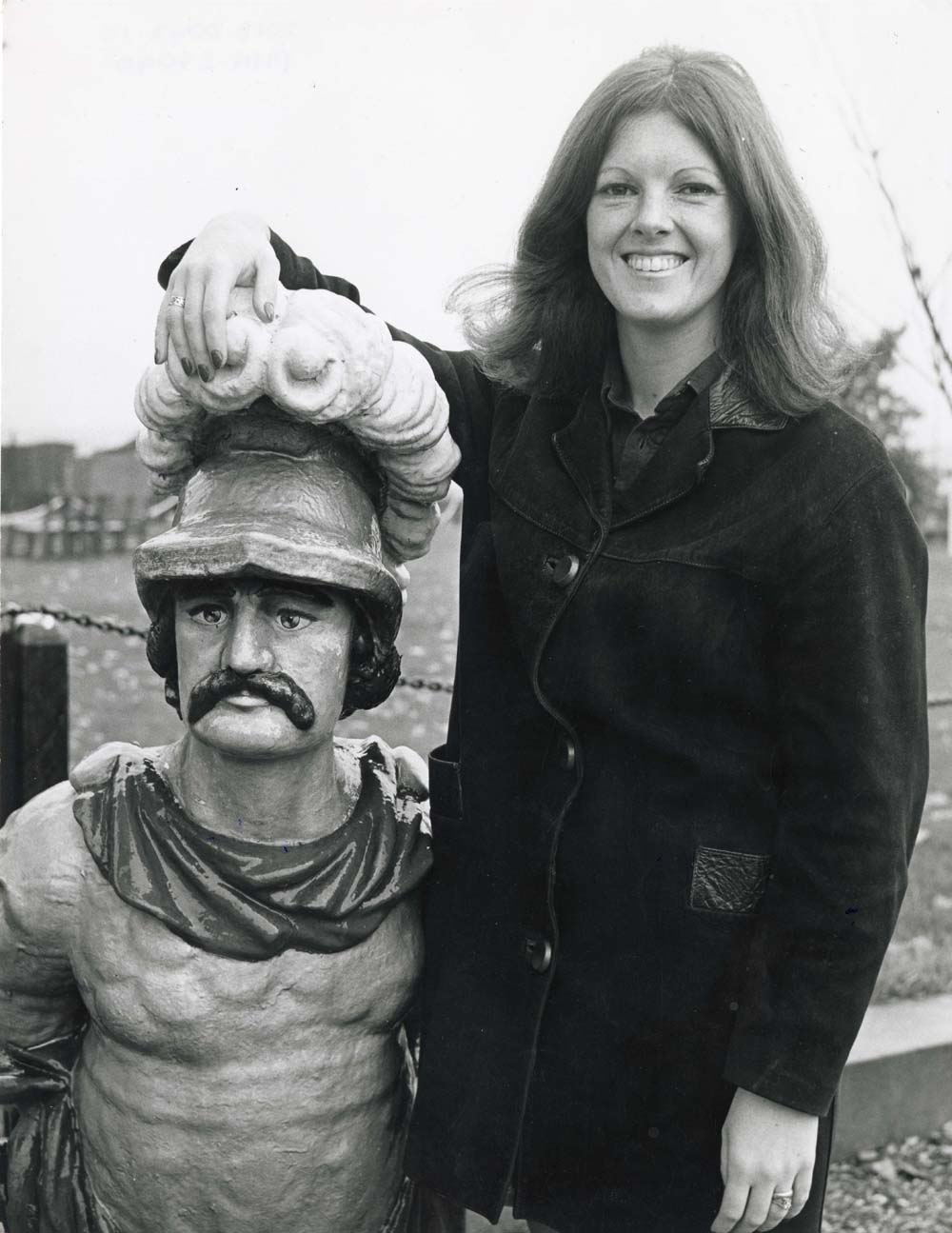 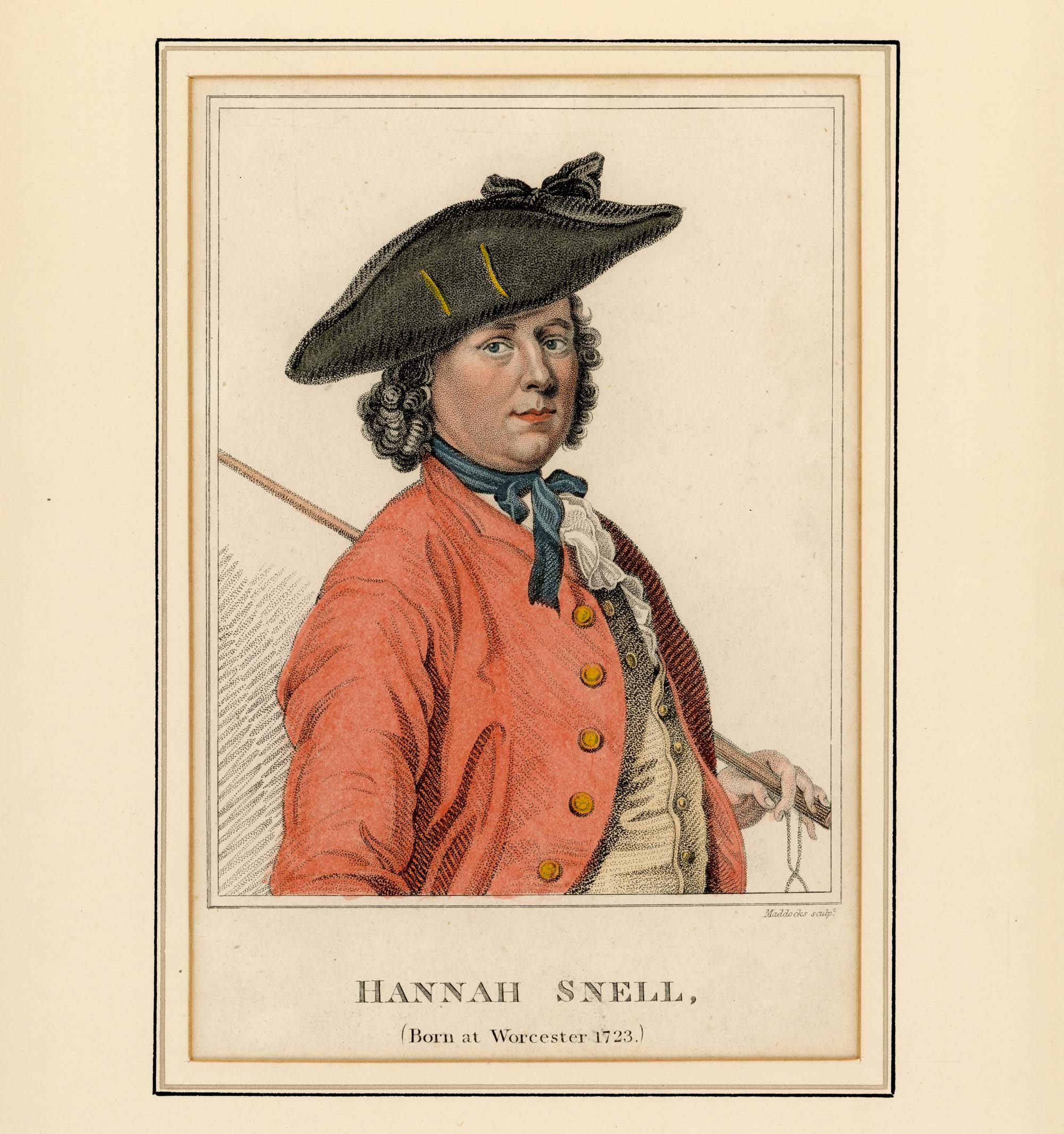 Hidden Heroines also reveals two remarkable stories of sailors in disguise. Hannah Snell achieved a kind of ‘celebrity’ status during her own lifetime after spending several years dressed as a man. In 1747 she joined the marines, sailed to India onboard HMS Swallow and took part in the Siege of Pondicherry.  during which she was shot and wounded in her right leg, left arm and groin. At the hospital, she allowed the surgeons to treat the gunshot to her leg and arm but was said to have extracted the musket ball from her groin herself.

In 1750, aged 27, she became one of two women to receive a pension for her injuries from the Royal Hospital. The other being Christian Davies, aka Christopher Welsh, who was discovered by army surgeons after an injury at the Battle of Ramillies in 1705.

‘William Brown’ is the first known Black female to serve in the Royal Navy. She spent over a decade on British warships and showed incredible nerve, strength and ability as she rose up the ranks to become Captain of the foretop. Here she led a team of sailors in all weathers to set the sails on the foremast. At over a hundred feet high this was a demanding and dangerous job.

A married woman, she joined the Royal Navy around 1804 to escape her husband, but it wasn’t until 1815 that she was discovered and her story made the papers, but this did not affect her naval career and she returned to serve on HMS Queen Charlotte. Sadly, it is not known what happened to this remarkable woman after 1816.

However, within London’s Annual Register (c.1794) comes this tantalising portrait of ‘William Brown’. “She is a smart, well-formed figure, about five feet four inches in height, possessed of considerable strength and great activity…”

Yet despite this famous and covert history of women among its ranks it was not until 1993 that women were integrated into the Royal Navy as fully fledged sailors alongside men.

“As Hidden Heroines clearly demonstrates, the Royal Navy has progressed from women having to dress as men to gain opportunity to go to sea to being named one of the UK’s top employers of women,” says Hidden Heroines Curator, Alexandra Curson. “The exhibition serves to celebrate the success of women in the workplace, which was made possible by some of the amazing women highlighted in Hidden Heroines, who bravely broke down barriers, challenged gender roles and paved the way for others.

“Visitors today will certainly see and experience how Chatham Historic Dockyard Trust has moved the museum forward from gender segregated roles to an inclusive culture.

“Women make up 57% of our workforce and are represented across all departments. They have the responsibility to champion the heroines of the past and through learning more about their stories, the Trust pledges to promote further equality and inclusion in its workforce, empowering future generations.”

Hidden Heroines is at Chatham Historic Dockyard from May 29 – October 31 202.

A unique, award winning maritime heritage destination with a fantastic range of attractions, iconic buildings and historic ships to explore, PLUS a fabulous programme of temporary exhibitions at No.1 Smithery. Make rope on the Victorian Ropery Tour; be gripped by stories of life aboard our Three Historic Warships, see BIG…