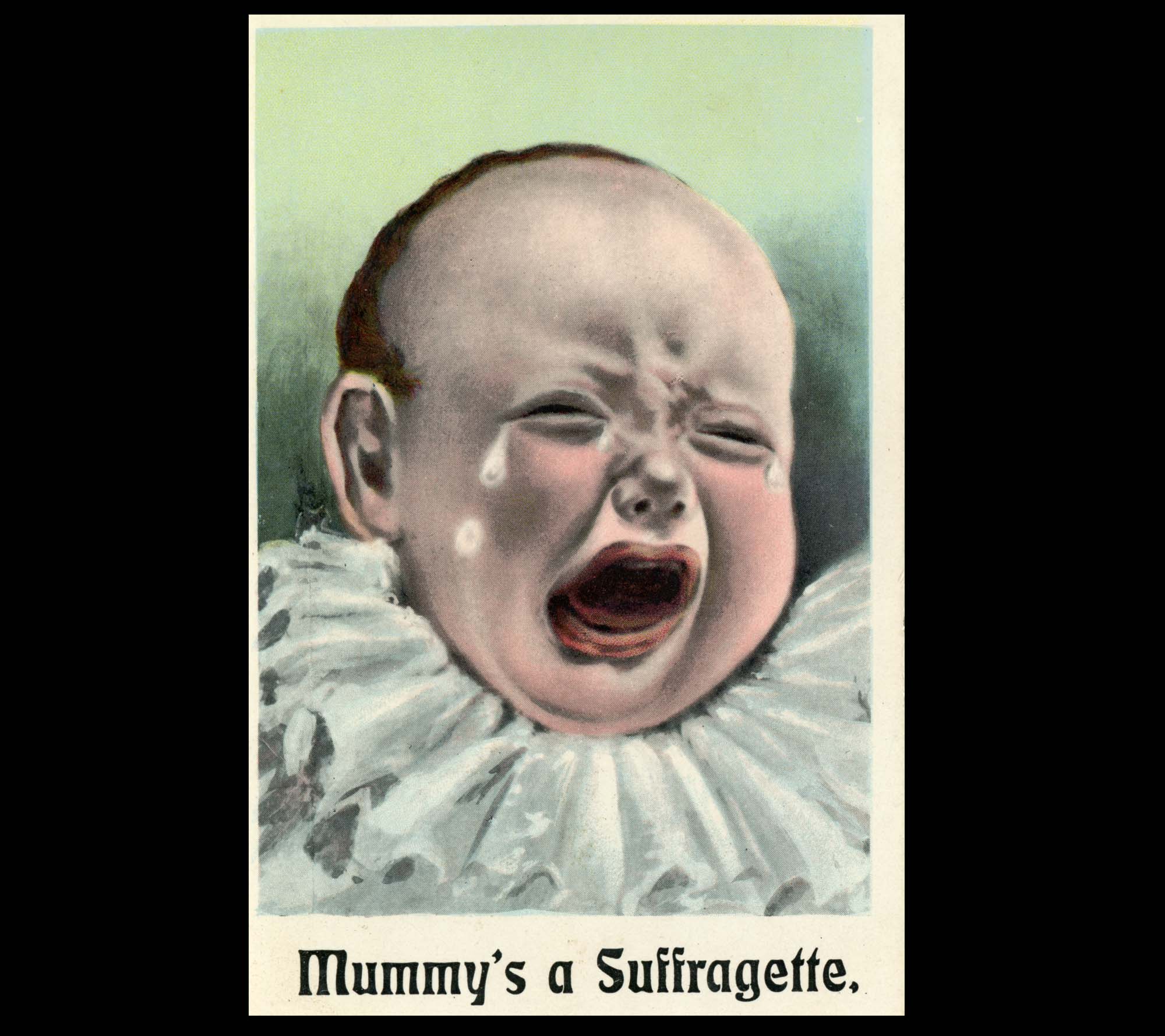 Glasgow Women’s Library, based in Bridgeton in Glasgow’s East End, holds a treasure trove of historical and contemporary artefacts and archive materials that celebrate the lives, histories and achievements of women. The only Accredited Museum in the UK dedicated to women’s history, and a designated Recognised Collection of National Significance, both the museum and archive collections contain a fascinating assemblage of material relating to the Suffragette Movement.

2018 marks the centenary of The Representation of the People Act 1918, which introduced the franchise to women over the age of 30 who met a minimum property qualification. While not constituting the franchise on an equal basis with men, the Act of 1918 is widely accepted as having been a significant precursor to the eventual Representation of the People (Equal Franchise) Act of 1928.

The GWL collections feature a wide variety of books and objects relating to the Suffrage movement but our range of postcards is arguably the most visually arresting. Both for and against women’s suffrage, they have pictures and slogans that are often shocking and grotesque. What makes these objects even more fascinating is that they were used for their intended purpose and many feature messages of greeting on the reverse. Several of the images that follow depict violence against women. 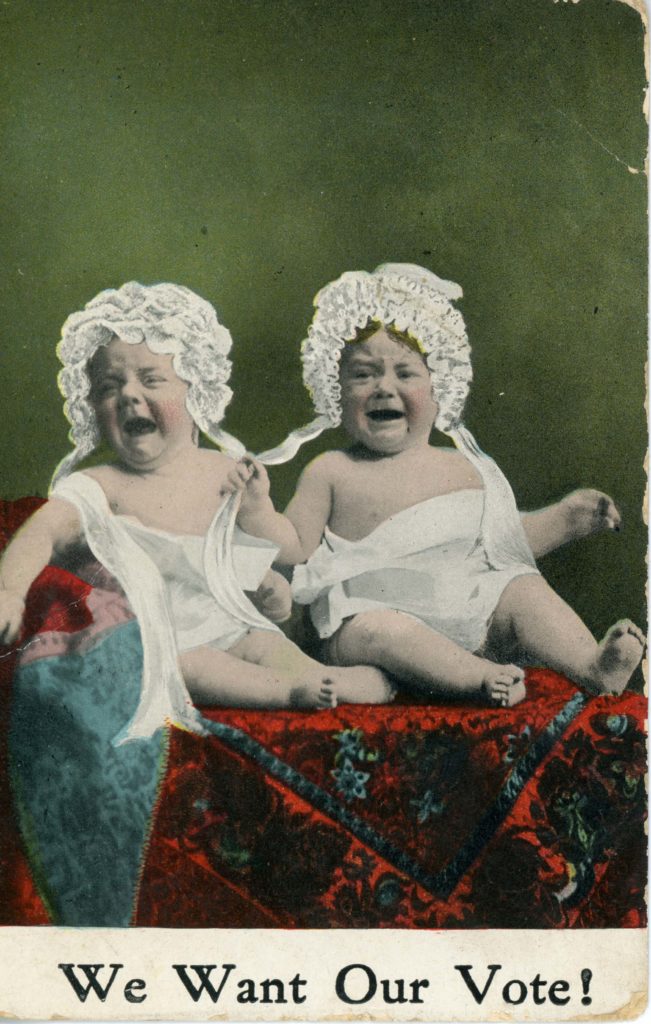 Babies and children appear often on the anti-suffrage postcards and are used to infantilise Suffragettes or remind the public of women’s traditional role of mother and caregiver. Other such postcards show husbands having to care for the children and even having to take responsibility around the house.

Of course, these images are always accompanied by captions that show how a woman who is a Suffragette will only bring ‘suffering’ on her family. 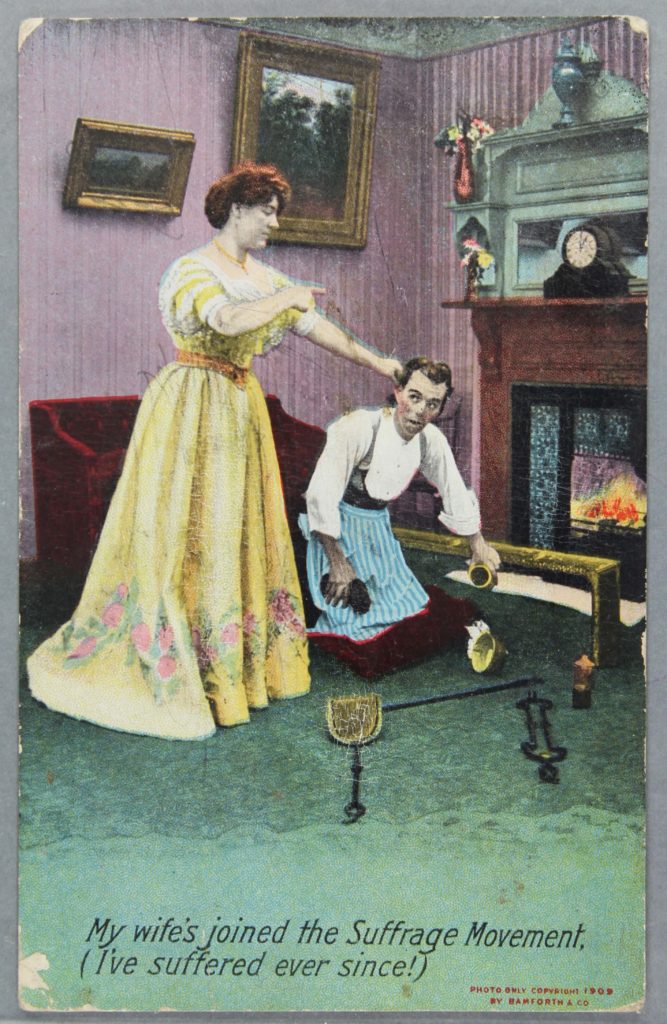 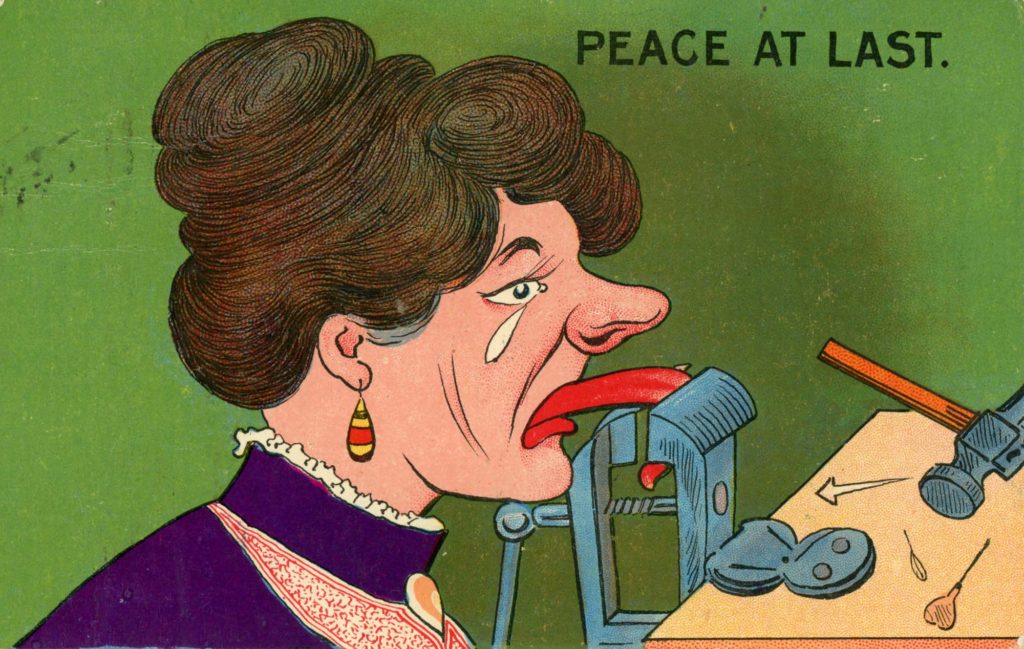 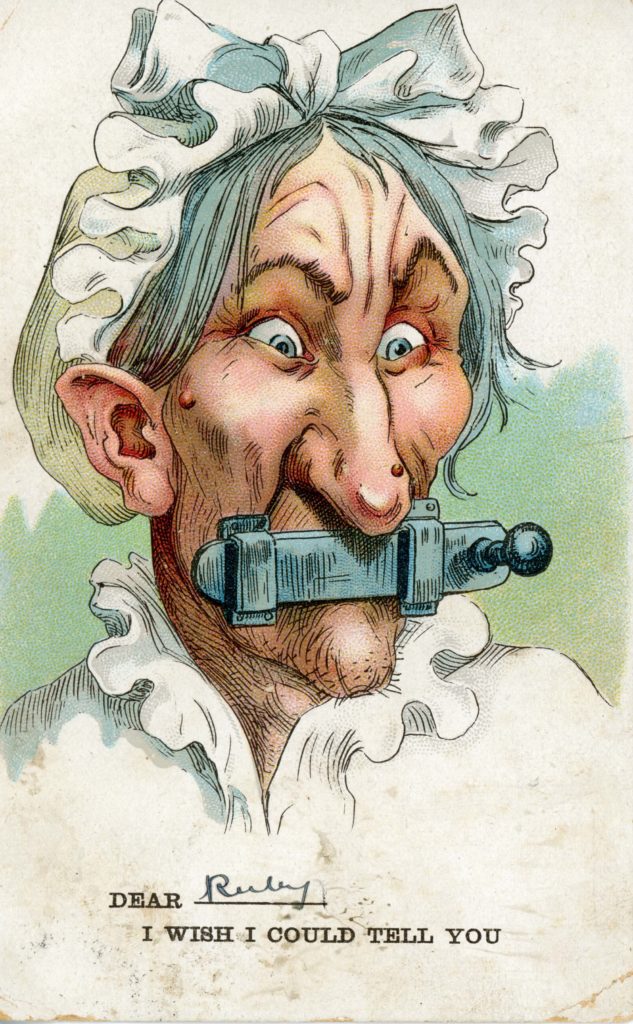 Physically holding or harming a woman’s tongue or forcibly keeping her mouth shut is a common theme in the anti-suffrage postcards we have in the Glasgow Women’s Library collection. Some aren’t obviously related to the Suffrage movement – though there are small nods to it, like the purple of the woman’s dress in the postcard above, which is reminiscent of the Suffragettes’ purple, white and green colours – but appeal more to the desire to keep women in their place and keep them quiet.

These very visceral depictions of silencing women are sometimes at odds with their cheery messages of greeting, as shown below on the reverse of the ‘Dear Ruby’ postcard. 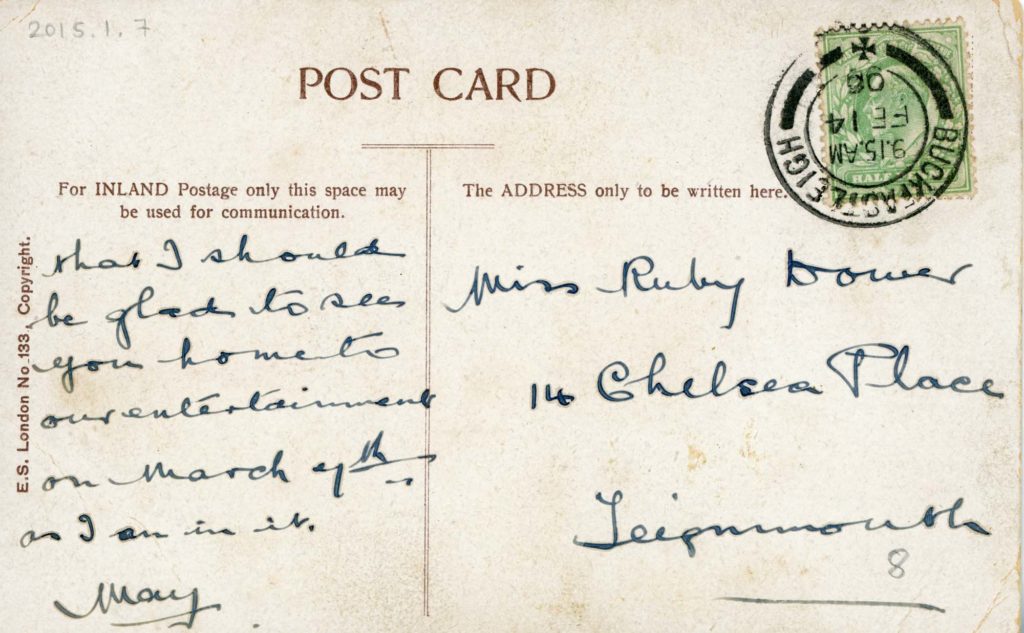 The text on the reverse of this postcard reads: ‘That I should be glad to see you home to our entertainment on March 7th as I am in it. May’ 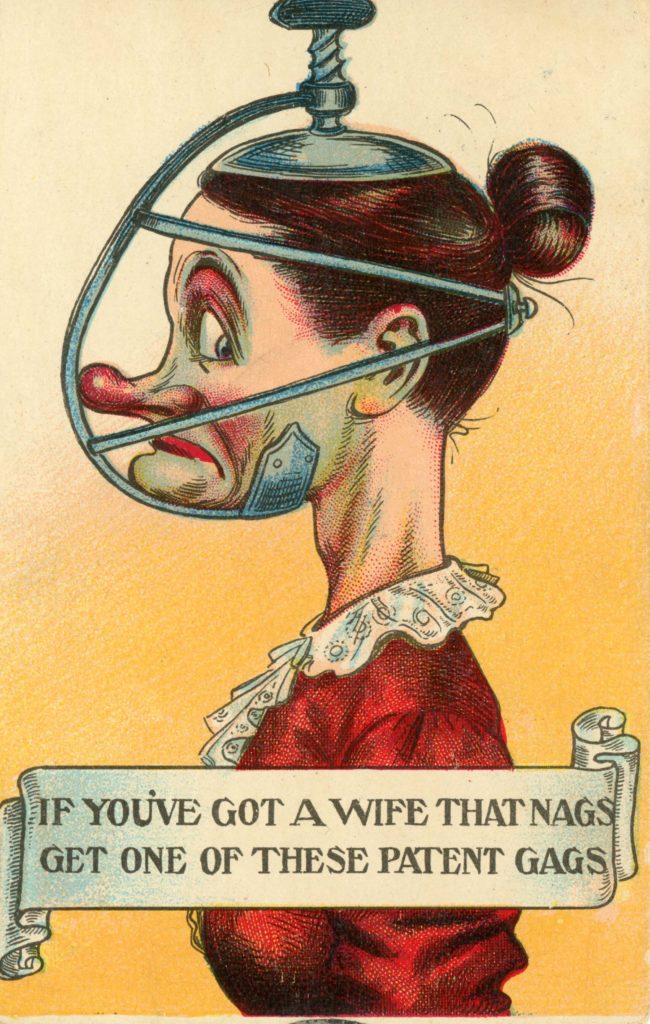 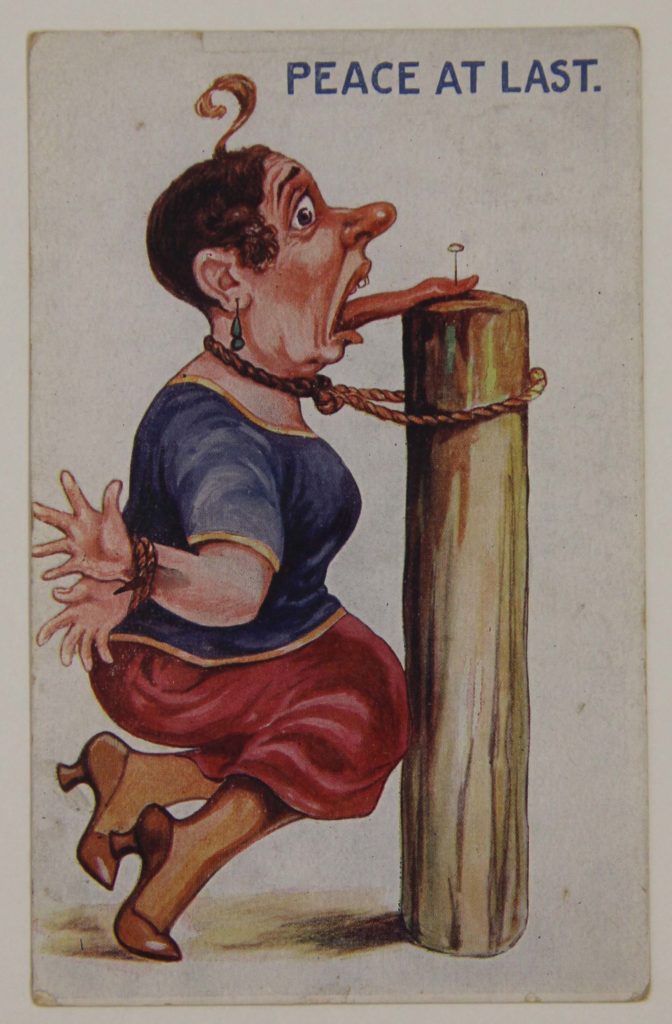 In the early 20th century, postcards were a quick, cheap and easily accessible form of communication. At the time many of these postcards were delivered, there might be up to four deliveries of mail a day in the countryside and as many as eight in the cities, so postcards and letters were a much used means of communication and faster than we might think of today.

The women are frequently depicted as ‘ugly harridans’ on these postcards – the implication being that they are only Suffragettes because they can’t get a man, and, therefore, fulfil the traditional role of ‘The Angel in the House’; the creators of these postcards would hope to communicate that their ugliness and their ideology are interrelated. This would have been to discourage women from joining the cause and to encourage mockery of those who were already Suffragettes. 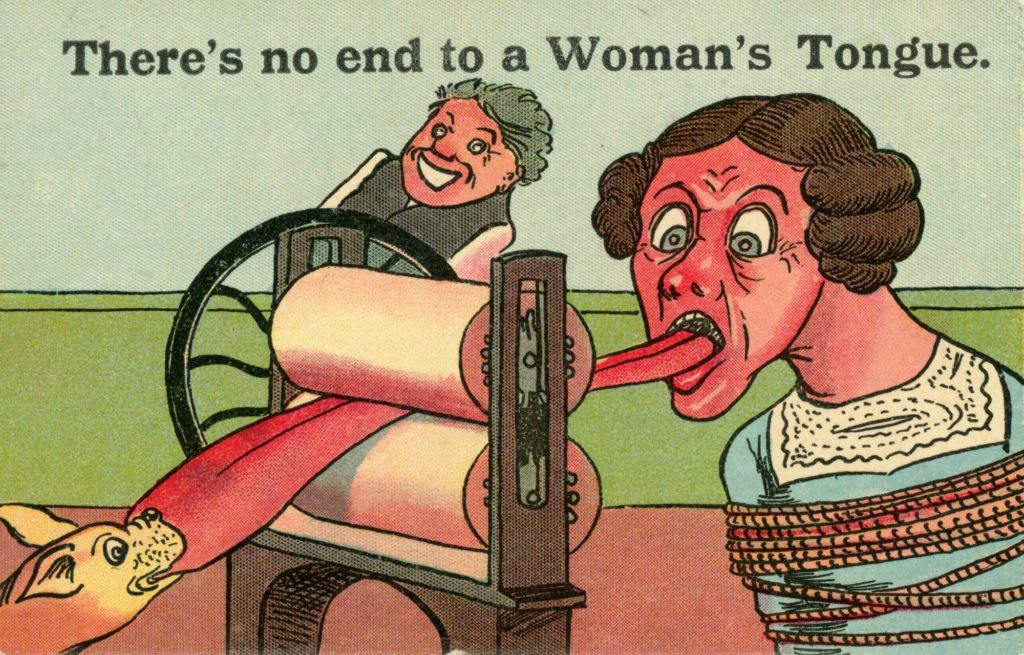 Some of the postcards, such as the one above, were sent to addresses without any messages of greeting. We can’t say for definite why the sender would leave the correspondence section of the postcard blank but the simplest explanation is that they sent the card to draw the recipient’s attention to the image on the front of the card.

Whether that was because they agreed or disagreed with its sentiment, we will never know. Ambiguity is a common theme when looking at these artefacts. 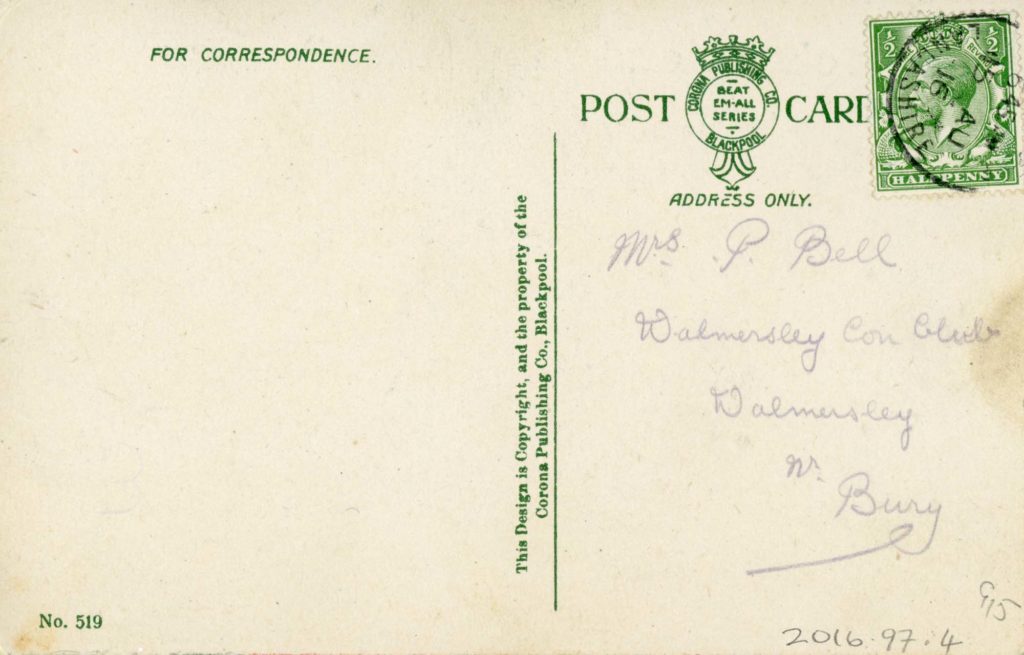 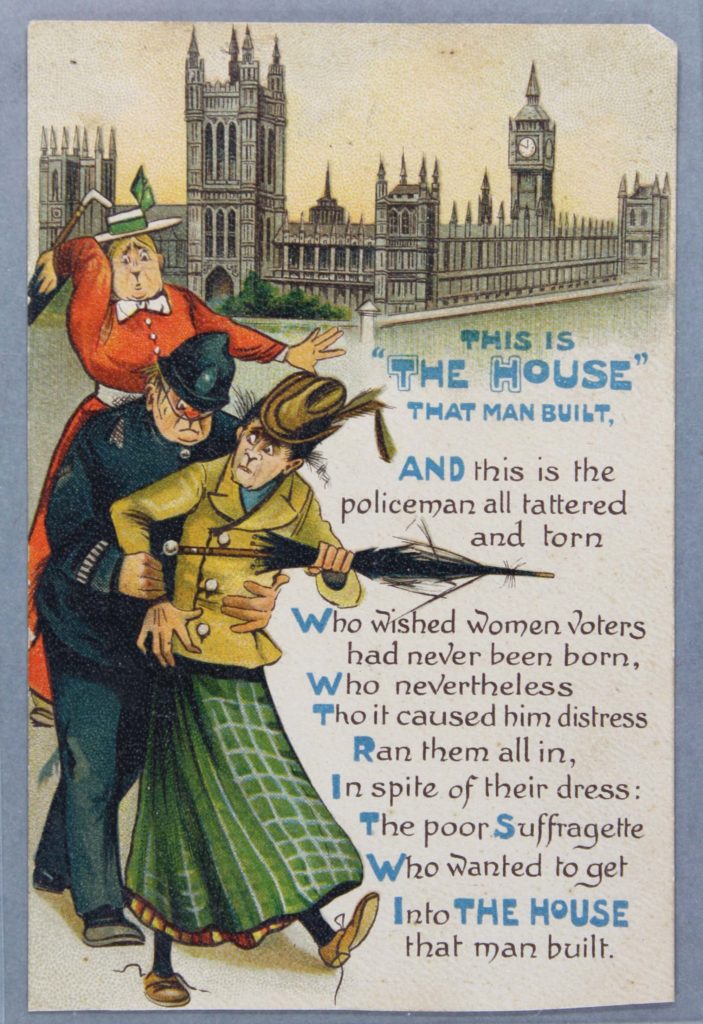 This is the house that man built. Courtesy Glasgow Women’s Library. 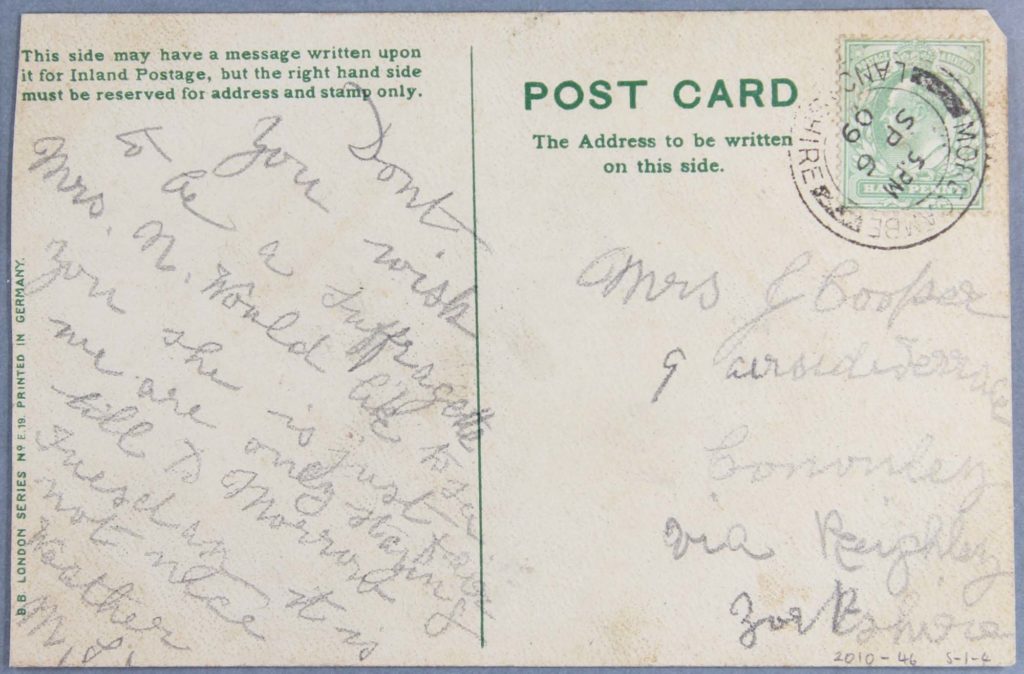 Some of the postcards directly address the suffrage movement. The greeting on this postcard reads: ‘Don’t you wish to be a Suffragette. Mrs N. would like to see you… We are only staying till tomorrow, Tuesday – it is not nice weather.’ Once again, the meaning of this statement is ambiguous.

Is the writer telling the receiver not to think about becoming a Suffragette? Or is she herself dreaming of becoming one? 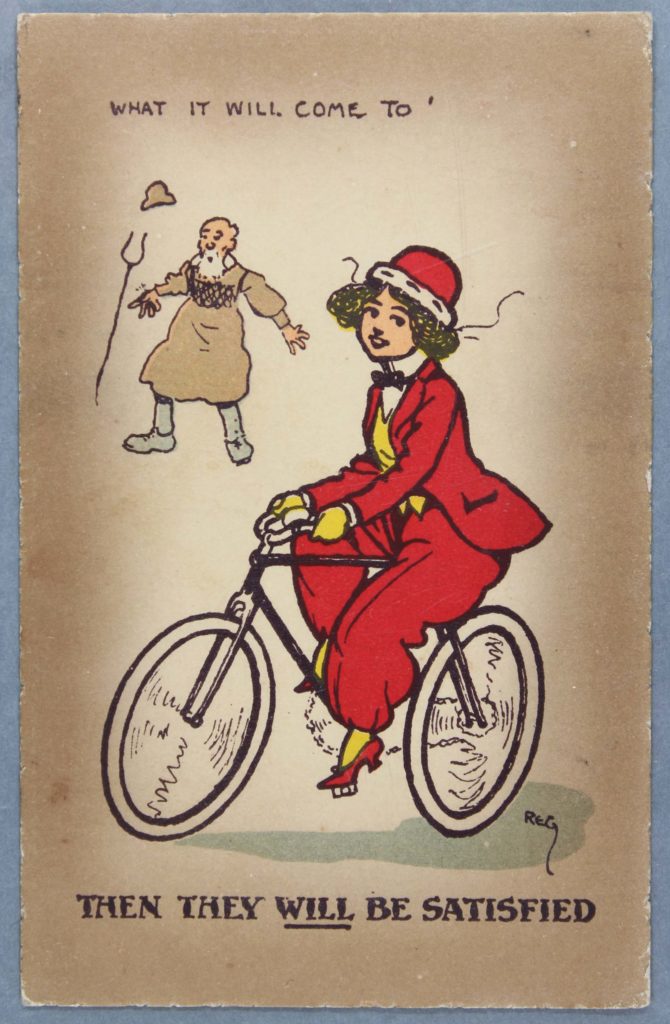 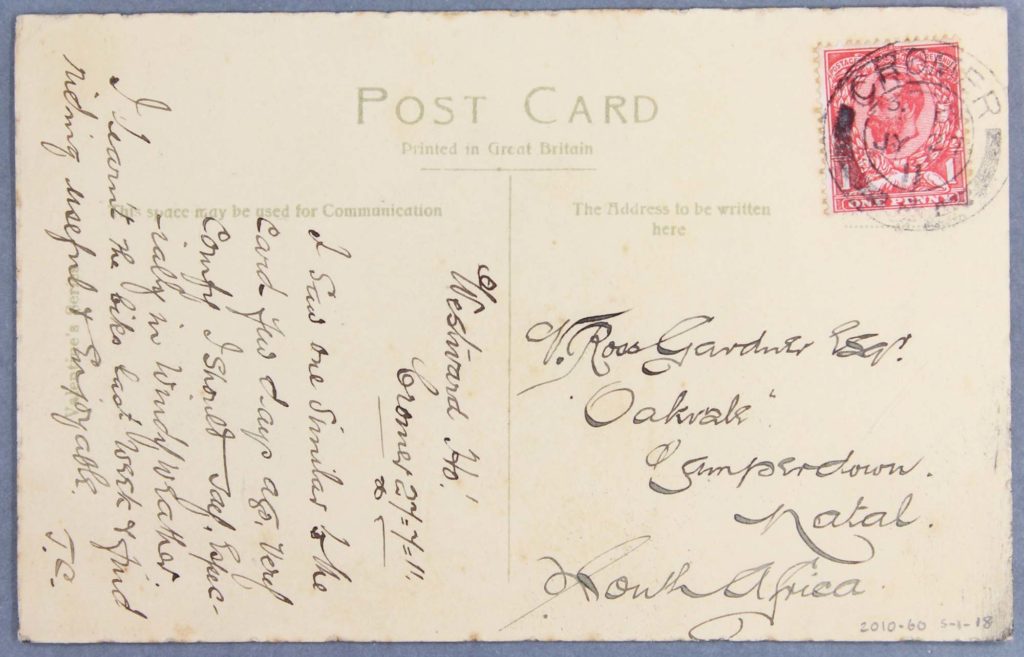 Sometimes the use of the postcards actually subverts the message intended from its imagery. For instance, this postcard portrays a woman on a bicycle with an anti-suffrage tone but the message on the back recounts one woman’s experience of learning to ride a bike and how useful and enjoyable she’s found it. So these postcards were likely used in all sorts of complex ways.

The text on this postcard reads: ‘I saw one similar to the card few days ago, very comfy I should say, especially in windy weather. I learnt the bike last week & find riding useful & enjoyable.’ 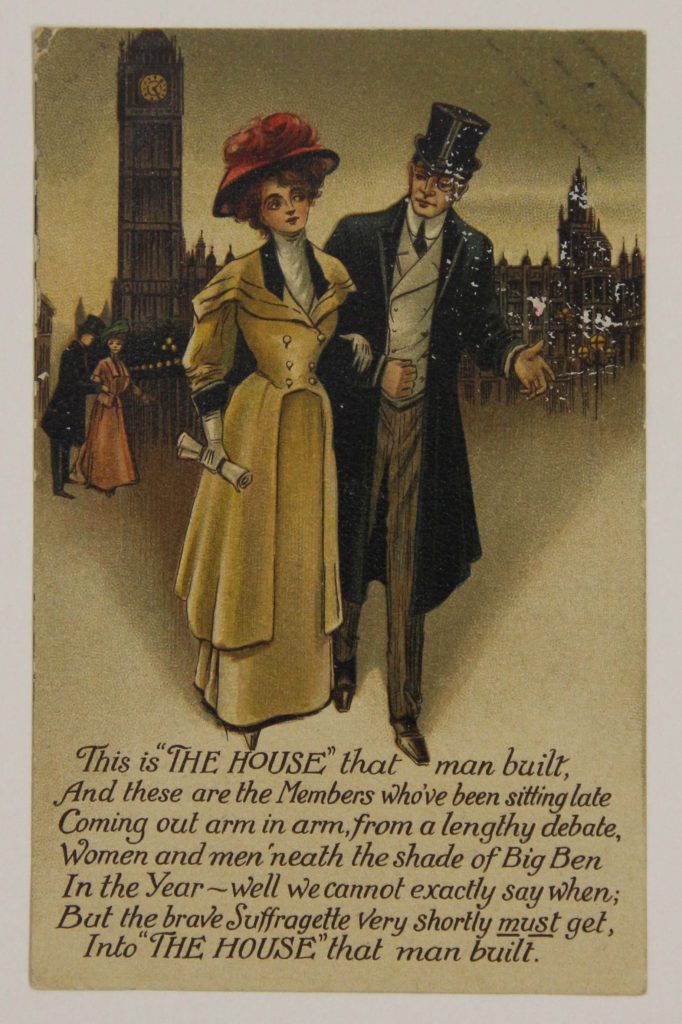 Although a large portion of the postcards in the Glasgow Women’s Library collection express anti-suffrage sentiments, we also have postcards that were produced by Suffragettes and pro-suffrage campaigners that counter the violent and grotesque imagery of the anti-suffrage materials.

The postcard above is a response to the anti-suffrage postcard above that begins with the same line. This card instead outlines the desire for an equal opportunity to participate in politics and shows a man and a woman arm in arm. It ends with the lines, ‘In the Year – well we cannot exactly say when; But the brave Suffragette very shortly must get, Into “The House” that man built.’ 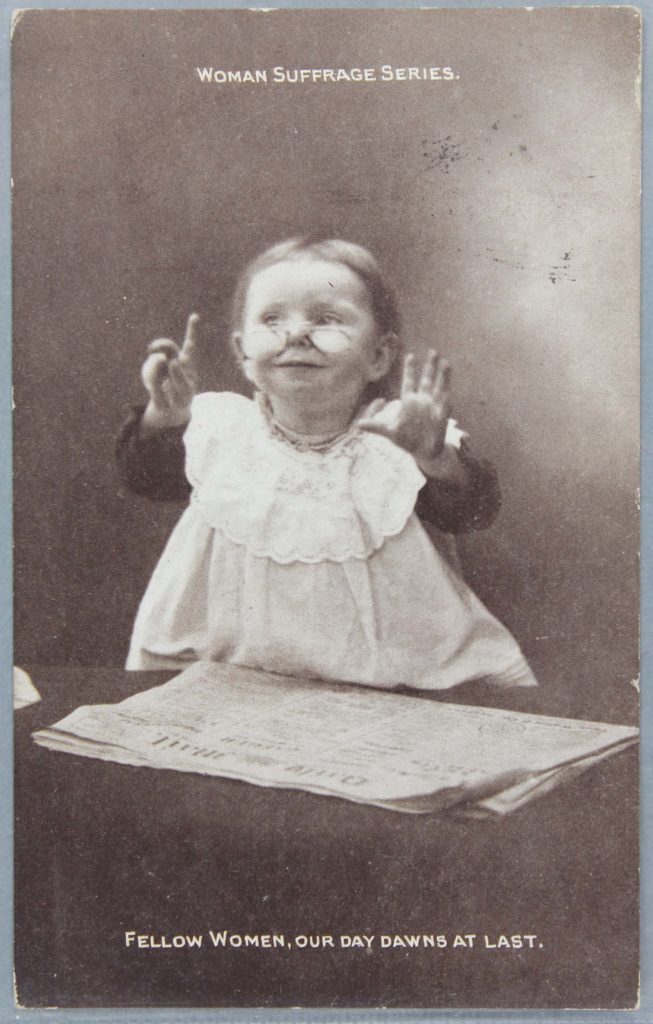 These postcards illustrate just how hard both sides fought for and against women’s suffrage and the postcards shown here reflect only a small proportion of the Glasgow Women’s Library collection. Although the fearmongering from the anti-suffrage campaigners ultimately lost out, it’s important to look back at these artefacts and observe how society has attempted to subdue and silence women.

In 2018, as we celebrate the centenary of the 1918 Act, we should also reflect on ways in which modern culture and society continues to perpetuate these ideas.

Explore the collections of Glasgow Women’s Library at womenslibrary.org.uk/explore-the-library-and-archive/

Glasgow Women's Library is a provider of information by and about women. It is a popular meeting place for women and its creative, supportive environment acts as a catalyst for projects, friendships and laughter.