Photograph of a Roma man, thought to be Jozef Kwiek, in Belzec concentration camp in German-occupied Poland, 1940. Romani families in the background sit in the fenced off part of the camp. Courtesy Wiener Holocaust Library Collections

The genocide carried out against the Roma and Sinti communities of Europe by the Nazis and their collaborators during the Second World War – a vicious persecution and murder of as many as 500,000 people – has been referred to as ‘the forgotten Holocaust’ by the Holocaust historian Professor Eve Rosenhaft.

After the war, survivors and relatives of victims struggled to gain recognition and compensation for the persecution and losses that they had suffered. In Britain and Europe today, prejudice and discrimination against Roma and Sinti remains common.

At the Wiener Holocaust Library, which is the world’s oldest Holocaust archive and Britain’s largest collection on the Nazi era, a new exhibition explores the Nazi persecution of the Roma and Sinti in Germany and Austria prior to the Second World War, and the genocidal policies that started in German-occupied Poland in 1940.

Yet it’s true to say the Roma and Sinti, who had arrived in Germany from the Indian Sub-Continent in the Middle Ages, were always persecuted in some way or another, even during the Weimar period, but when the Nazis came to power in 1933 the persecution became more systematic.

Roma or Sinti girl imprisoned in Auschwitz. Pictures taken by the SS for their files. Courtesy Wiener Holocaust Library Collections 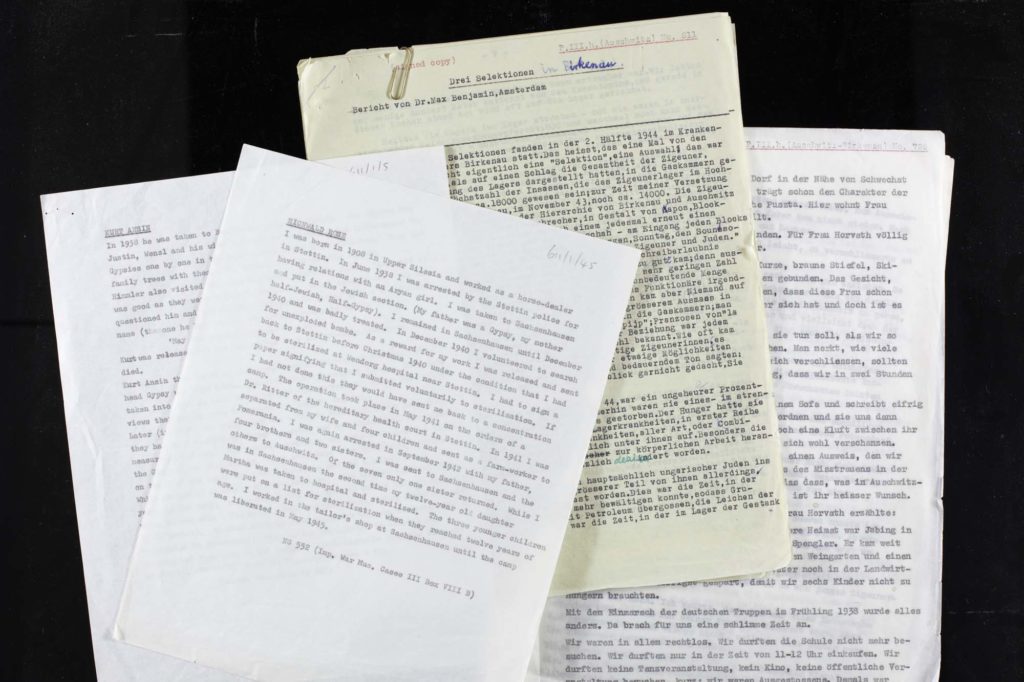 Unpublished accounts collected in the 1950s as part of The Wiener Library’s project to gather eyewitness accounts of the Holocaust. Wiener Holocaust Library Collections

“It started before the Holocaust with persecutory measures being introduced and also a development through the 1930s in Germany of racist ideas and pseudo-scientific racist ideas about Roma,” says the Wiener Holocaust Library’s exhibitions officer Dr Barbara Warnock.

“Initially you could say the Nazi regime targeted Roma on the kind of spurious basis that they were criminal or anti-social but then from the mid to late thirties racist ideas and a targeting of Roma and Sinti in Germany and Austria became widespread because of an idea of racial inferiority.”

There was an escalation in 1936 at the time of the Berlin Olympics, with mass internment in camps just for Roma and Sinti across Germany run by local police and from 1938 there was more intensive action against them in Germany and Austria.

“During the war, prior to the Holocaust, there were still areas in some ghettos which were areas for Roma, there were people working as slave labourers in labour camps, there were people in concentration camps and then increasingly central European and western European Roma and German Roma were sent into camps in Poland and into Auschwitz in particular.”

In Auschwitz in 1943 a specific section of the camp was designated the ‘Gypsy camp’ and about 23,000 Roma were deported into this camp, of whom 21,000 were murdered.

The collection charting this terrible history includes accounts from the Library’s eyewitness testimonies collection, which was part of a research project that the Wiener Holocaust Library staff launched in the 1950s to gather eyewitness testimonies to the Holocaust from across Europe and which saw a number of Romany survivors interviewed. The Library also has possession of the Kenrick Collection, which contains a wealth of material relating to the persecution of the Roma and Sinti under the Nazis, collected and compiled in 1968.

Both of these collections sought to gather and preserve testimonies soon after the end of the Second World War.

“There is one very striking testimony that we’ve used in the exhibition by a Romany woman from Austria, Hermine Horvath,” says Warnock, “she actually accounts all of her experiences, including in Auschwitz, and the sexual violence that she experienced and witnessed at the hands of Nazis there, so it makes it a very interesting and obviously disturbing testimony.”

The Wiener Holocaust Library’s eye witness accounts of the Gypsy camp at Auschwitz show that conditions were brutally poor. But at this point people deported there were not being murdered on arrival, but were being forced into slave labour. It wasn’t until August 1944 on Himmler’s orders that the Gypsy camp at Auschwitz Birkenau was actually liquidated. On the 2nd August 1944 about 2,900 people were murdered in the gas chambers.

“It’s worth pointing out that the inhabitants of the camp did offer some resistance; they did fight,” says Warnock, “but ultimately they were unsuccessful.”

As well as the harrowing accounts and testimonies, the exhibition also features documents from the Nuremberg war crimes trial that were entered in evidence there, although crimes against Roma weren’t prosecuted at Nuremberg. 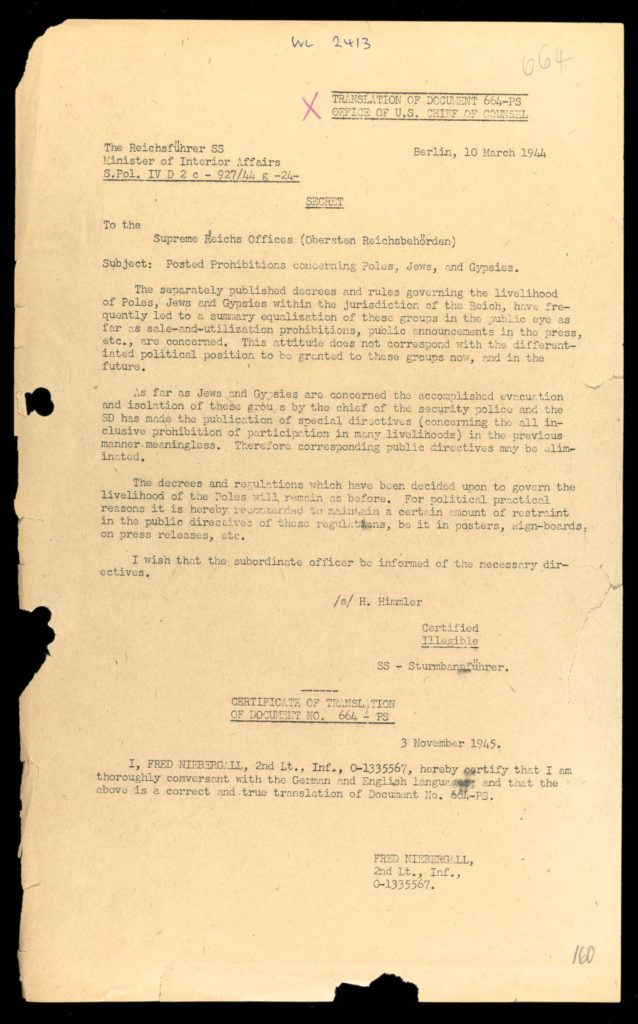 One chillingly bureaucratic piece of evidence is a translation of a document written by Reichsführer Heinrich Himmler relating to the employment and restrictions of Poles, Jews and Gypsies.

“What is so chilling about the document, which is written in March 1944, was that Himmler basically says that in terms of the prohibitions, Poles, Jews and Gypsies are being presented in the public eye to the German public as equivalent groups, when essentially Poles are different,” says Warnock.

“He then he lumps Jews and Gypsies together and says prohibitions against them are no longer necessary because of the “accomplished evacuation and isolation”. It’s a chilling phrase that means their removal from Germany and their deaths.

“The genocide against Roma and Sinti wasn’t carried out as systematically as that against Jews. It wasn’t a priority in the same way and it took longer to get going but nevertheless by 1944 I think you can safely say that this is a policy of genocide.”

The exhibition also examines the difficult post-war lives and legacies for Roma and Sinti and reflects on the situation in Britain and Europe today, considering why these communities are still the ‘forgotten’ victims of genocide.

Theresia Reinhart, whose daughter was taken from her and murdered during the course of a medical experiment, later ran a Sinti organisation in West Germany campaigning for recognition of genocide and two brothers, Vinzenz and Oscar Rose, campaigned in Germany post-war and set up organisations and memorials.

“There was a fight that went on to try and gain this recognition and acknowledgement from the German authorities,” explains Warnock.

“Initially they were quite resistant to the idea of restitution and argued through the 1950s that Roma and Sinti were not targeted for racial reasons but were targeted essentially for being criminal and were therefore not eligible for restitution.

“It was only in 1982 that Germany officially recognised that genocide had been committed, so it took a long time to get that recognition.”

The Library’s international tracing service collection tells part of this story of recognition and draws on the documentation gathered towards the end and after the war to trace those lost and missing in the war and the Holocaust. It also chronicles the fates of Roma people sent to camps. 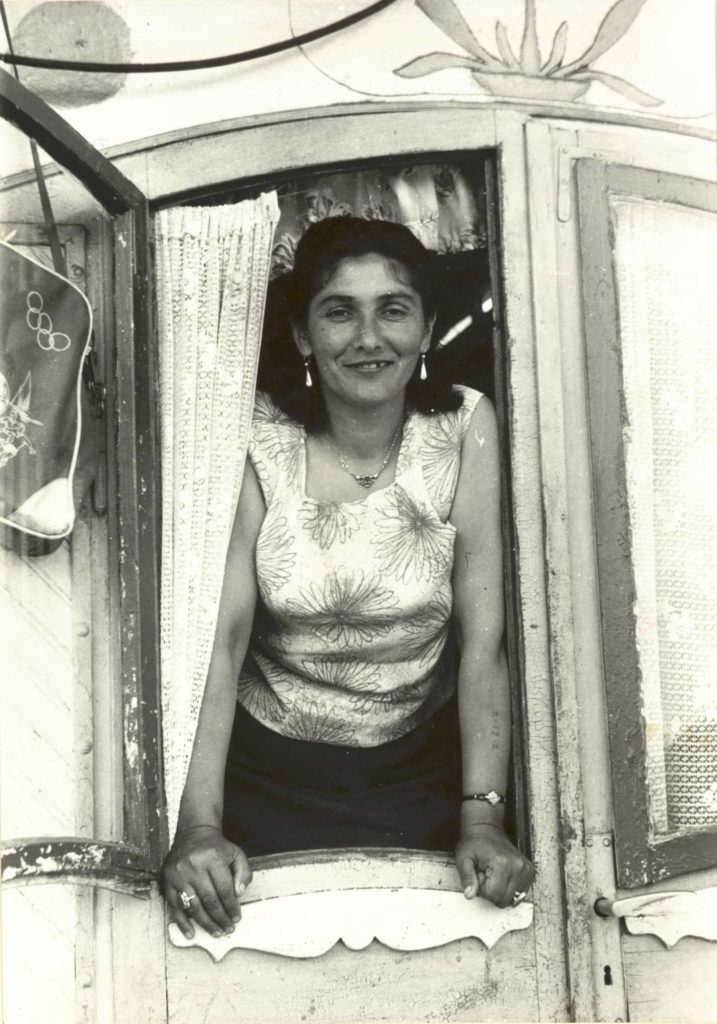 Margarete Kraus, a Czech Roma, was deported as a teenager with her family to Auschwitz in 1943 and experienced the horrendous conditions of the Gypsy camp where she contracted typhus.

Her own account of her experiences together with information from the international tracing service collections about her, reveal that she was subjected to forced medical experiments in Auschwitz and that her parents were murdered there. She survived because she was transferred to Ravensbruck Concentration Camp as slave labour.

The photograph of her smiling from the door of her caravan with her Auschwitz camp number tattoo clearly visible on her arm, was taken in East Germany where she was interviewed by a journalist who was investigating what had happened to her.

“We want to give people more information and to understand more of the story and highlight how, even if Jews were more of a priority for persecution for Nazis, similar racist ideas did apply,” adds Warnock. “Looking through our collections, what we found were the many individual stories, so it’s also about bringing to light these stories of the individuals affected by these terrible events.”

The Wiener Holocaust Library is committed to ensuring that the suffering and injustices that these communities suffered are not forgotten and these unique and vital collections are available for users to access digitally in the Library’s Wolfson Reading Room.

Forgotten Victims: The Nazi Genocide of the Roma and Sinti is at the Weiner Holocaust Library until March 11 2020.

The Wiener Holocaust Library is one of the world's leading and most extensive archives on the Holocaust and Nazi era. The Library's unique collection of over one million items includes published and unpublished works, press cuttings, photographs and eyewitness testimony. It provides a resource to oppose antisemitism and other forms…