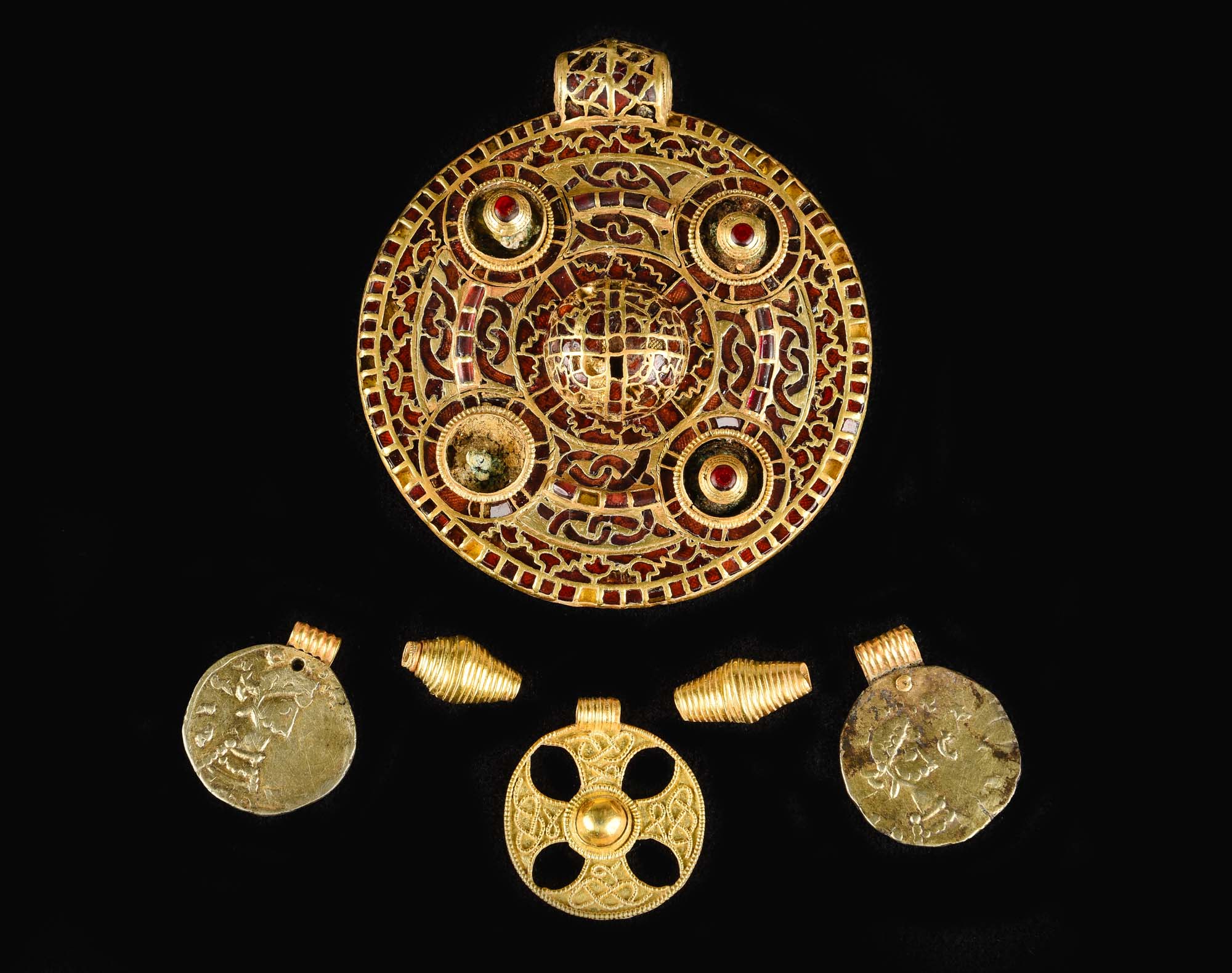 Dr Tim Pestell, Senior Curator of Archaeology at Norwich Castle Museum and Art Gallery, on the recently acquired seventh century Winfarthing burial treasures and what they tell us about Anglo-Saxon East Anglia

Everyone goes “wow” over the pendant, but it is actually one component of a fascinating burial assemblage from the grave of a wealthy female dating to the seventh century. As much as the wonderful pendant stands out, the real story is as much about what we didn’t know about the Anglo-Saxon period at that date in East Anglia.

The find is also an example of really good metal detecting practice. A history student from UEA had been doing a lot of metal detecting on this particular farm in the parish of Winfarthing and in December 2015 he heard a fantastic signal. He dug down and realised that the bronze bowl he had found was beneath the plough soil.

Instead of digging it out he left it and covered it back up, understanding that a bronze bowl like that was most likely to have been buried in a grave. He then contacted Gressenhall, which is where our Find Identification Recording Service is based.

With a bowl like that, the chances are it’s buried at the feet of an east/west burial, and sure enough, they found the rest of the grave and with the bowl was a whole series of other grave-goods. 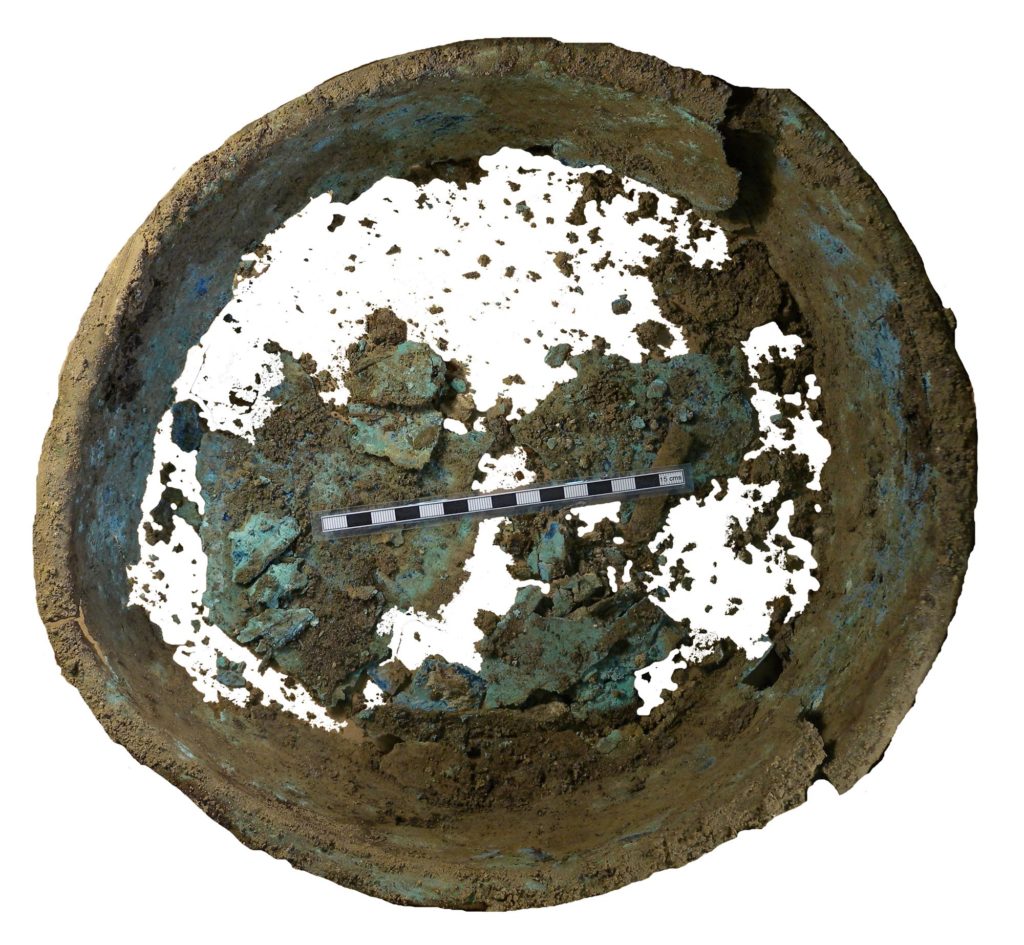 Remains of a copper alloy bowl constructed from a single piece of sheet-metal. The Portable Antiquities Scheme CC BY-SA 4.0 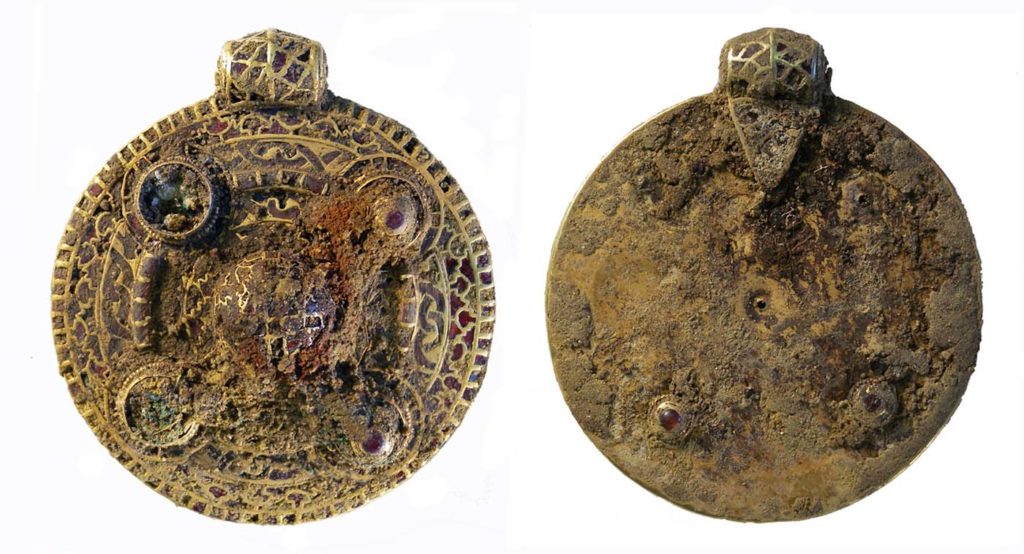 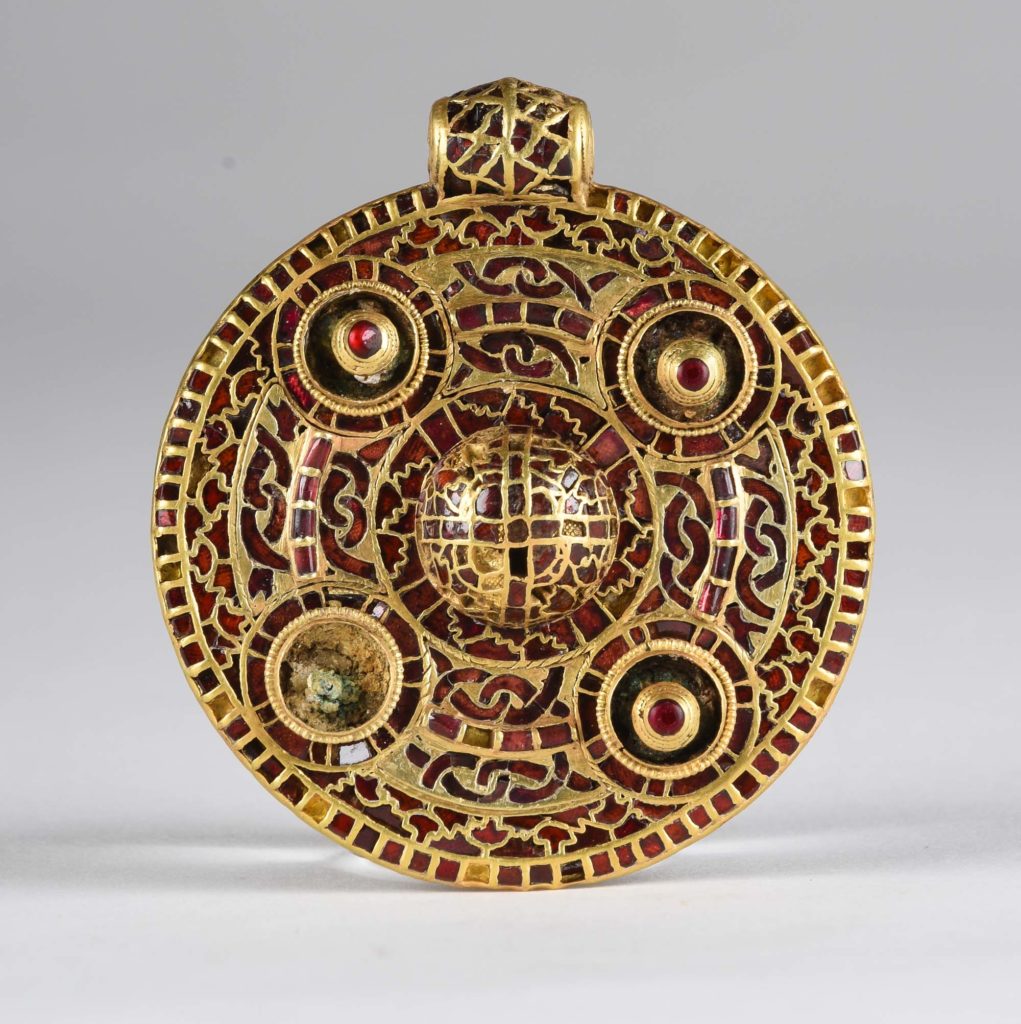 Remarkably for Norfolk the skeleton also survived in part; we have a lot of very large Anglo-Saxon cemeteries in the county but a lot of the time they are found in quite acidic sand or gravels, which means the bone dissolves. So this is quite nice in having some of the bones, which have been sexed and aged showing the person to have been a young adult female – an Anglo Saxon queen or ‘aristocrat’.

With the Helps of the Friends of Norwich Museums, the Art Fund and the National Heritage Memorial Fund, we acquired the complete contents of the excavated grave and one find from nearby, which was a small gold and garnet seventh century pendant.

The star object is undoubtedly the large garnet inlaid pendant, which is about 70 mm in diameter and of a design which is more normally found in brooches from that date. Instead of having a pin assembly on the back it has a suspension loop, and unlike most pendants of the time, which have a straightforward metal loop of ribbed gold, this one is actually inlaid with garnets with a rear escutcheon at the base of that loop, which is also inlaid with garnet.

There are wonderful little things like the two animals running in bands around the central boss with eyes inlaid in them that are half a millimetre in diameter and equally ostentatious is how the bosses on the front are attached with rivets that go through to the back of the plate, which are covered with garnets as well.

There are no sumptuary laws to say that you would need to be of a particular status to wear such a thing, but such jewellery is exceptionally rare. The standard of workmanship is particularly high and therefore it would have been an expensive commission and affordable by only someone at the highest level of society.

One of the things that you see in the 7th century is a drying up in the number of grave-goods buried with the dead and those that do have them are often slightly wealthier individuals. So how you define Winfarthing Woman? A queen, a princess, an aristocrat or a lady? It’s very difficult to give an exact title to someone like that, so we’ve just been using the word ‘aristocrat’.

Yet arguably just as important as her large pendant is a smaller pendant and the associated suite of jewellery, the central pendant of which features a cross. 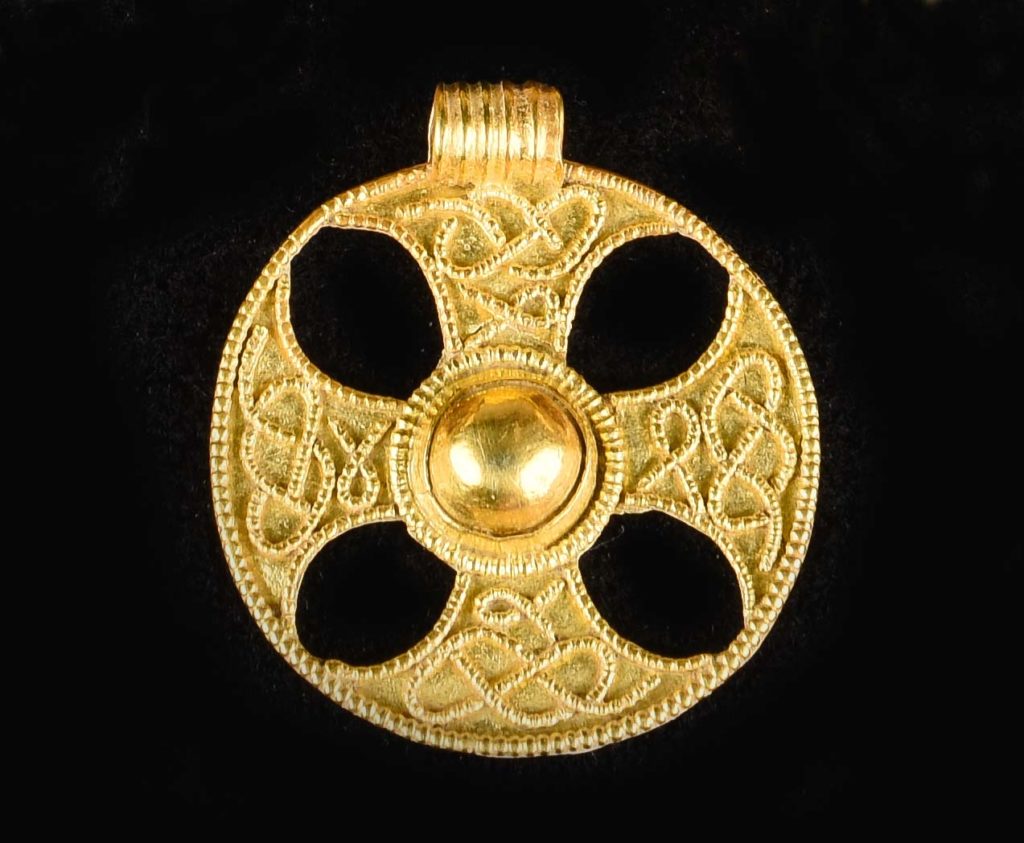 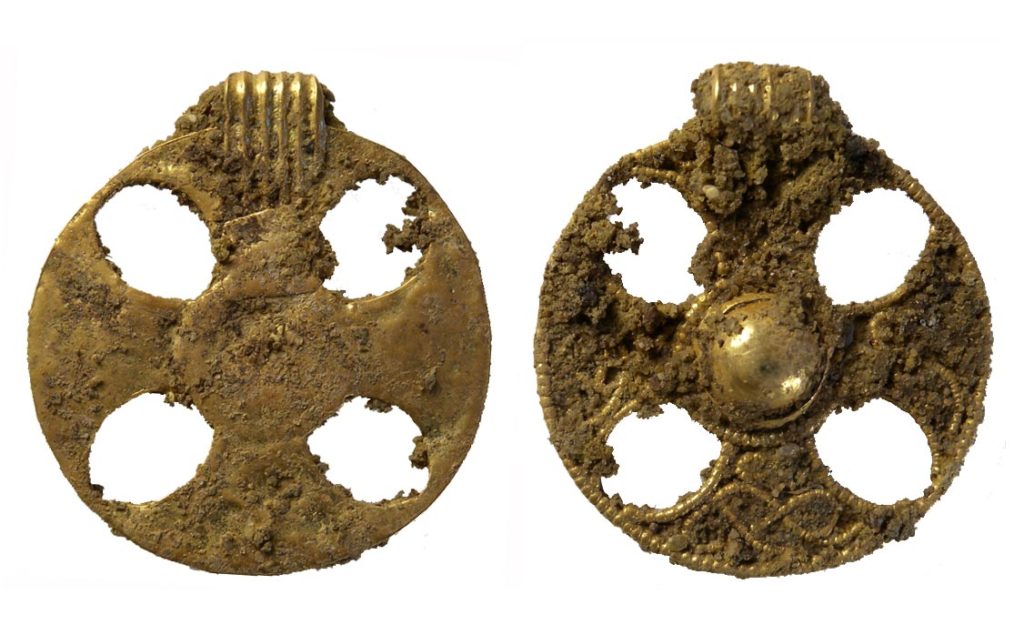 So you’re immediately talking about the Christian period and almost certainly a Christian buried in a cemetery that is not associated with a church building, so far as we can tell.

We’re in that period of the first converts to Christianity who are not yet buried inside churches or even around a cross in a churchyard – it’s that first period of Christianisation in the kingdom.

Taken with the other items it also helps us to link the grave to other ones in the region. For instance, we’ve got two coins that have been turned into pendants. These are coins of Sigebert III, who is a Frankish king between 633 to 656.

This very continental name was given to an East Anglian king who took shelter in the Frankish Court at one point although we don’t know the exact internal politics of what was going on in the kingdom at the time, nor do we know why this East Anglian king was known by a Frankish name. Was he some sort of half-Frankish person? Was there a political marriage? We simply don’t know.

But it’s rather suggestive that you have someone called Sigebert that comes back, introduces Christianity, which he’s picked up on the Continent and then we find two coins of Sigebert, mounted as pendants and then buried with this early Christian lady from Winfarthing.

“you’ve got these lines of insight into the early kingdom”

There are two similar coins mounted as pendants on another suite of jewellery from another very early Christian or conversion period grave found at Boss Hall near Ipswich. That particular grave just happens to have a most amazing garnet encrusted brooch as well.

Apart from Sutton Hoo treasures, there are three really nice, known brooches or pendants from the seventh century in East Anglia: one is from Winfarthing, one is from Harford Farm in Caister just outside Norwich and one is the one from Boss Hall just outside Ipswich, which was to become the central emporium of the kingdom of East Anglia, politically and financially while Caister by Norwich had a trading site just outside the Roman town wall. That means you’ve got an explicable reason for these two high status graves to be where they are.

But we don’t have a similar explanation for the burial at Winfarthing. It suggests that our archaeological models of what and where is important in the seventh century in East Anglia are wrong. It’s not that the grave is in the wrong place, it’s that we don’t understand why it is the right place.

This means you’ve got three East Anglian women, all buried with equivalent pieces of high status jewellery, two of whom have coins of the same king mounted in the same way.

And while it’s speculation, it does suggest that these women are part of the same sort of aristocratic circles and, who knows, they might even have been related to each other? I think that they could certainly have known each other in life, even if they were a generation apart, so you’ve got these lines of insight into the early kingdom. 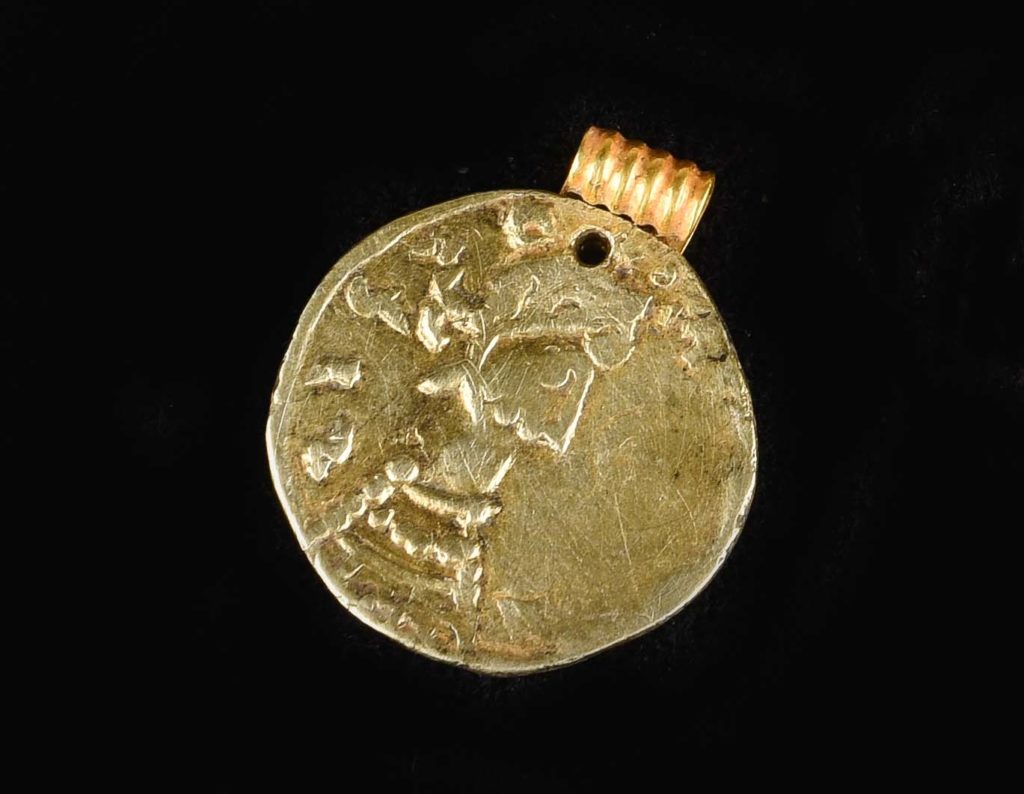 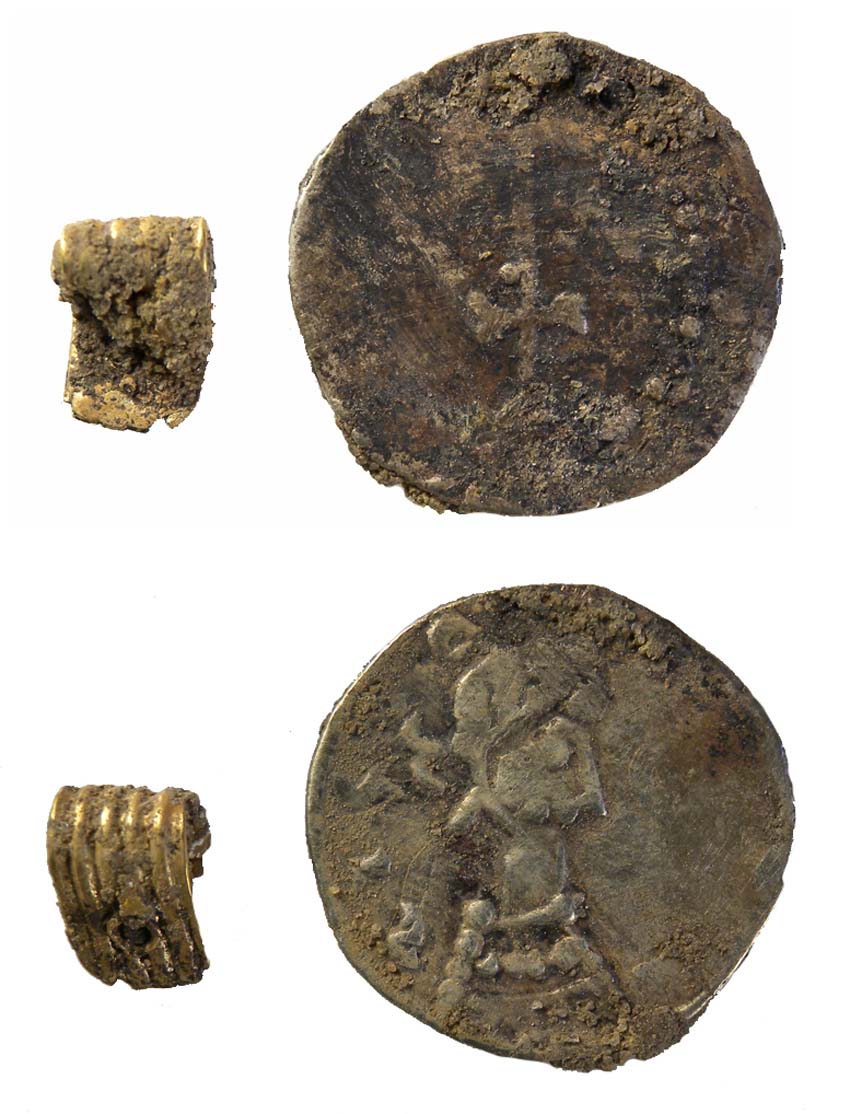 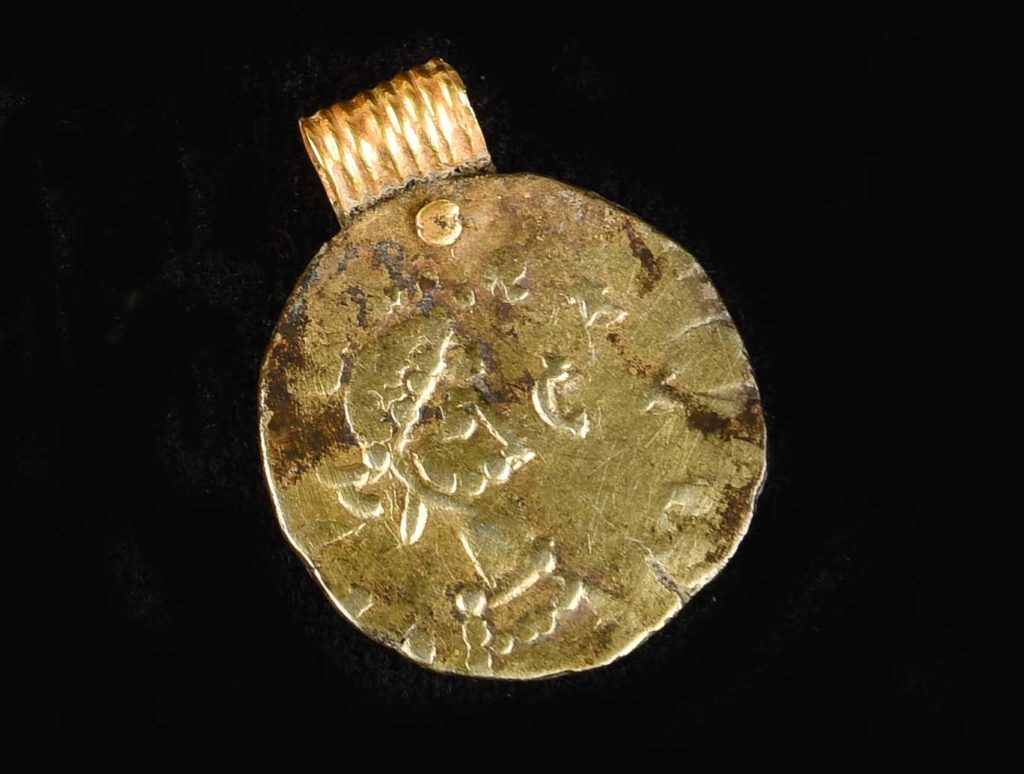 The Anglo-Saxon kingdoms of England are something that there’s been a lot of time and effort expended on trying to understand.

In the sixth century we begin to see a gravitational pull towards certain areas of the country, with people that describe themselves as kings emerging. This is something that Bede gives us a lot of information about.

In the seventh century we can see the process of Christianisation of those kingdoms – a so-called heptarchy of kingdoms, except instead of there being seven, there’s actually more of them. A lot of kingdoms become sub-kingdoms – it’s what Steve Bassett, lecturer at Birmingham, has called the FA Cup knock-out model where you get smaller kingdoms being knocked out by the bigger kingdoms which become even bigger.

Effectively a number of kingdoms became exceptionally powerful – like Mercia and Wessex, alongside Northumbria. But we also know that there are kings that Bede calls “Bretwaldas” or “wide rulers”. Victorian historians thought of this as some sort of hereditary position amongst the kingdoms, but people nowadays believe it’s a description by Bede of someone who was immensely powerful and probably subjected other kingdoms to their hegemony.

We know that Rædwald is the Bretwalda in his period of time. He is at first baptised and then he goes back to East Anglia and renounces his Christianity – almost certainly because Christianity and Christianisation is a cypher for being subject to another king and another kingdom. You’re made to convert just as Guthrum was made to convert under Alfred the Great. So he gets back to his kingdom, he renounces it and basically he’s saying that “I’m my own boss”.

This is the time when you get the East Angles being ruled by their own king, but it is one of those kingdoms that is never quite powerful enough, so for a lot of the time East Anglia is either subject to Mercia or in direct competition with it. East Anglia is too big to be gobbled up completely but never quite strong enough to maintain its independence. And there are some pretty powerful Mercian rulers, in particular Offa of Mercia, as in the famed dyke.

So when the Vikings come along they are able to skittle through a whole series of kingdoms that are at each other’s throats, and that probably helps them. When the West Saxon kings are able to push the Vikings back, it’s not that they’re re-conquering the Danelaw, they are actually conquering it, because it never belonged to them to start with.

This is why burials like this are so important, because they’re literally rewriting how we understand the political relationships that are undertaken within those kingdoms; it’s almost certain that there were rival factions even within the East Anglian royal family.

They’re probably based ultimately on tribal areas from the fifth and sixth century. Winfarthing is giving us an insight into that because it’s in an area that is effectively not that fertile, because it’s on the central clay lands, which aren’t somewhere you would associate with a rich powerbase. 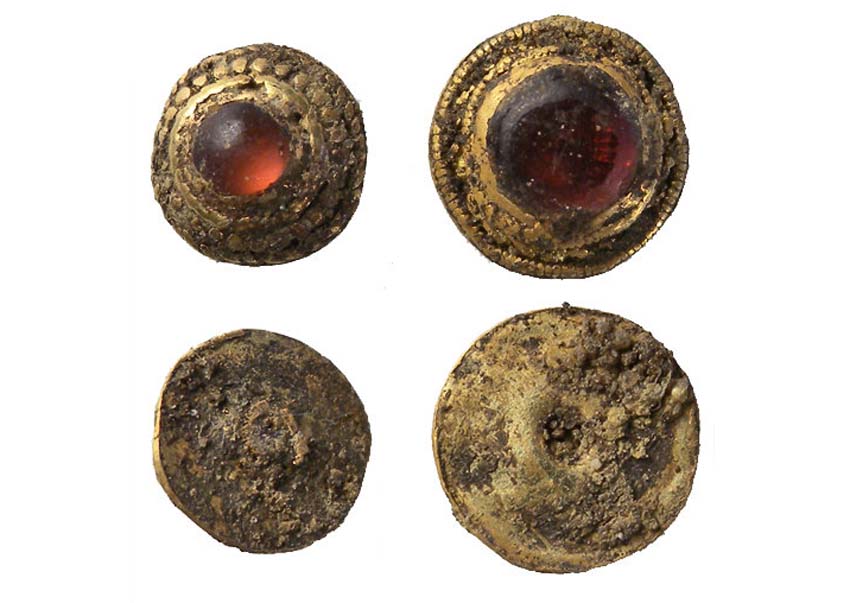 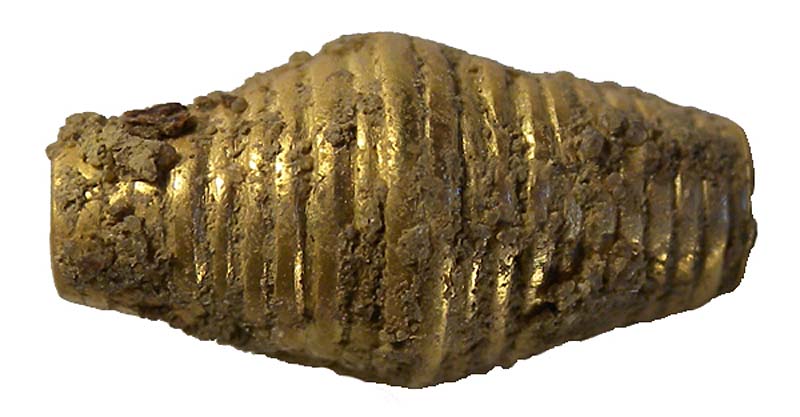 The finds also go well with our archaeology collections. The Anglo-Saxon collection we have is one of the best in the country, certainly outside the nationals and this latest acquisition is the most amazing piece of gold and garnet work and technically the peer of anything in the Staffordshire Hoard.

The whole assemblage also builds on the Continental connections that we can see elsewhere in our collections because the bowl from the grave is not of a standard English type, and there was also a crushed Frankish pot of the type associated with high status burials.

So very clearly this is the sort of person who would have had connections with the Continent, possibly even a person who is as intimately related and tied to the continent as to England.

We have to remember that there’s an enormous amount of mobility, especially in the upper classes. East Anglia is the first place you bump into when you sail off from the continent.

People tend to forget that now because we’re in a post-industrial revolution society, but before then that is why East Anglia was so rich with fantastic farmland and fantastically connected through the sea.