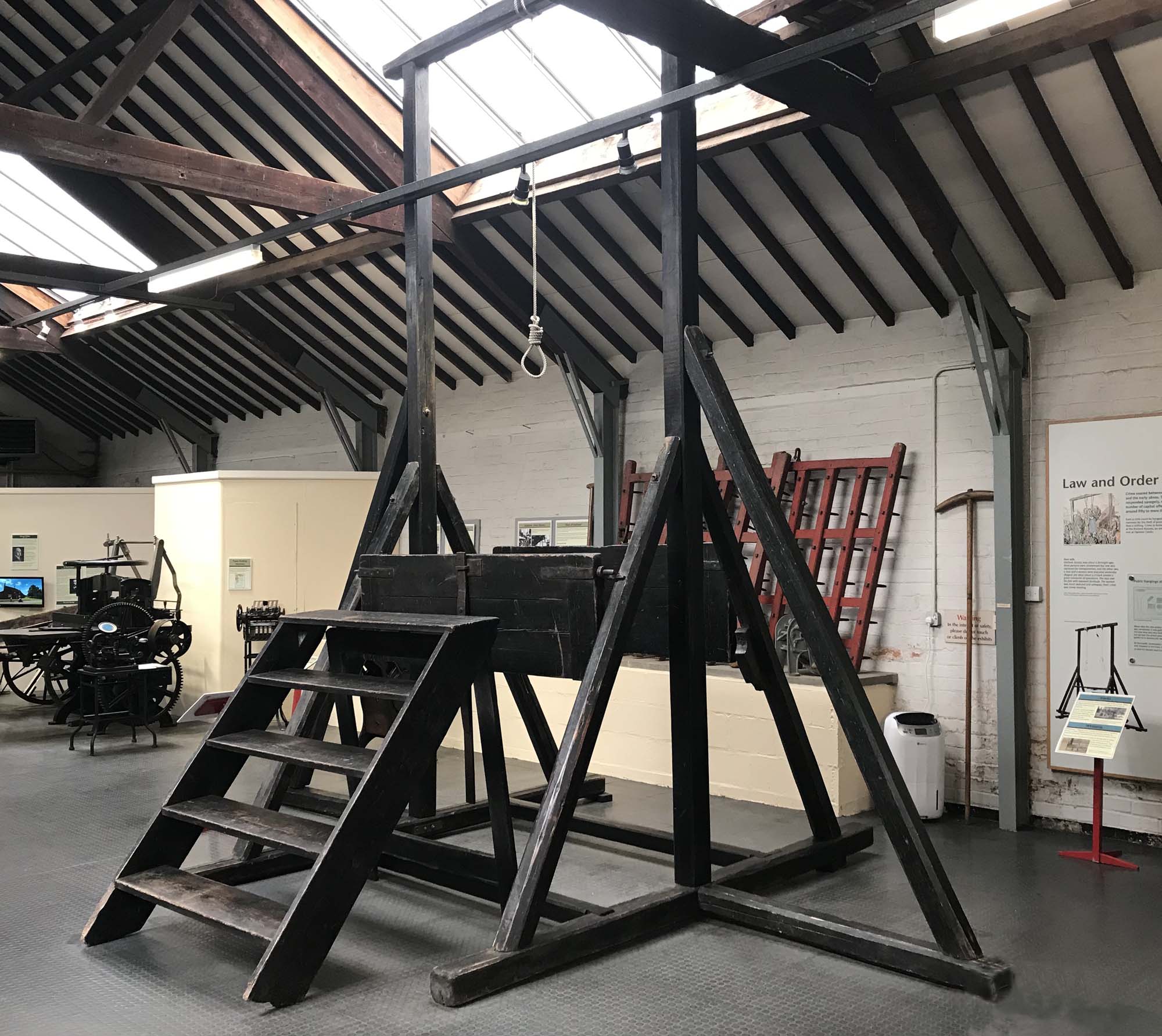 These gallows are what’s known as the New Drop, a very early type of drop gallows and are the only surviving set in the country. They are built of Baltic Pine, which some consider to be unusual as gallows were generally made of oak.

They are often referred to as short drop gallows because once the platform trapdoor was knocked away there’s only a three-foot drop, insufficient to break the neck, so death would not be instantaneous.

This short drop would often tear the muscles in the neck and shoulders causing muscle spasms lasting several minutes while the condemned was left to suffocate. As a result these gallows were viewed as a really cruel means of execution.

The spasm was called the hangman’s jig and at some execution sites family members would often run forward and pull on the body of those executed to try and bring about their death more quickly. These gallows, however, were used at Oakham Gaol in the early nineteenth century, mounted above the gatehouse so the public couldn’t get close to them, and the authorities had better control of the crowds that always gathered at executions. 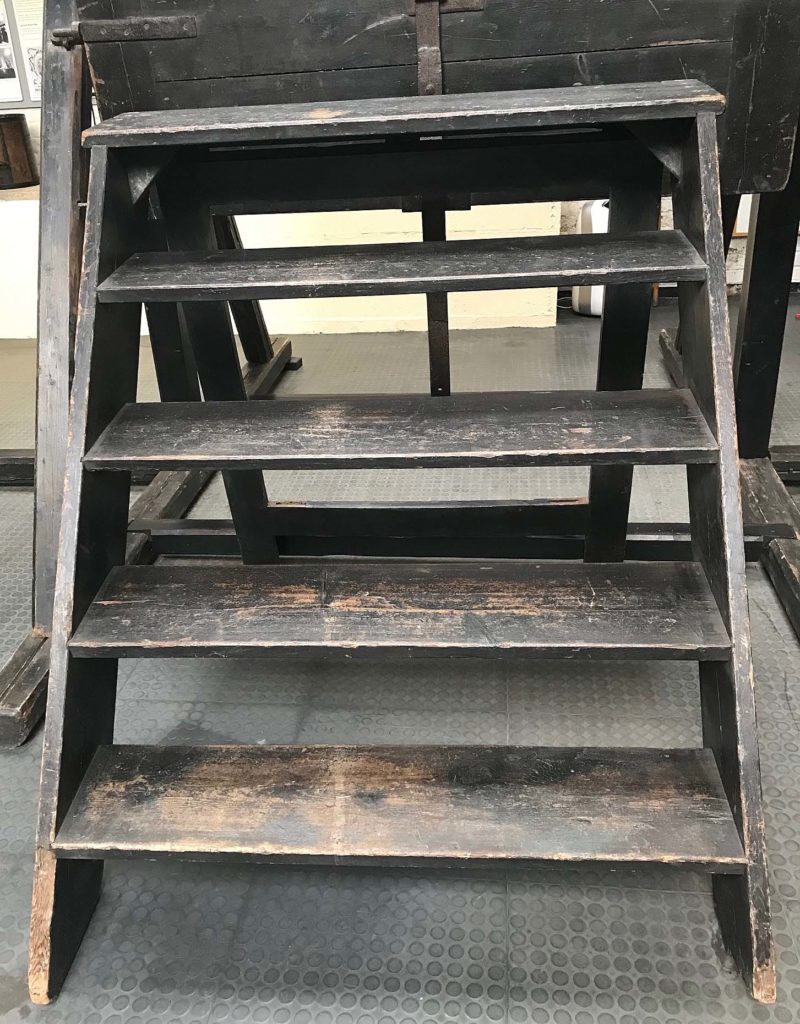 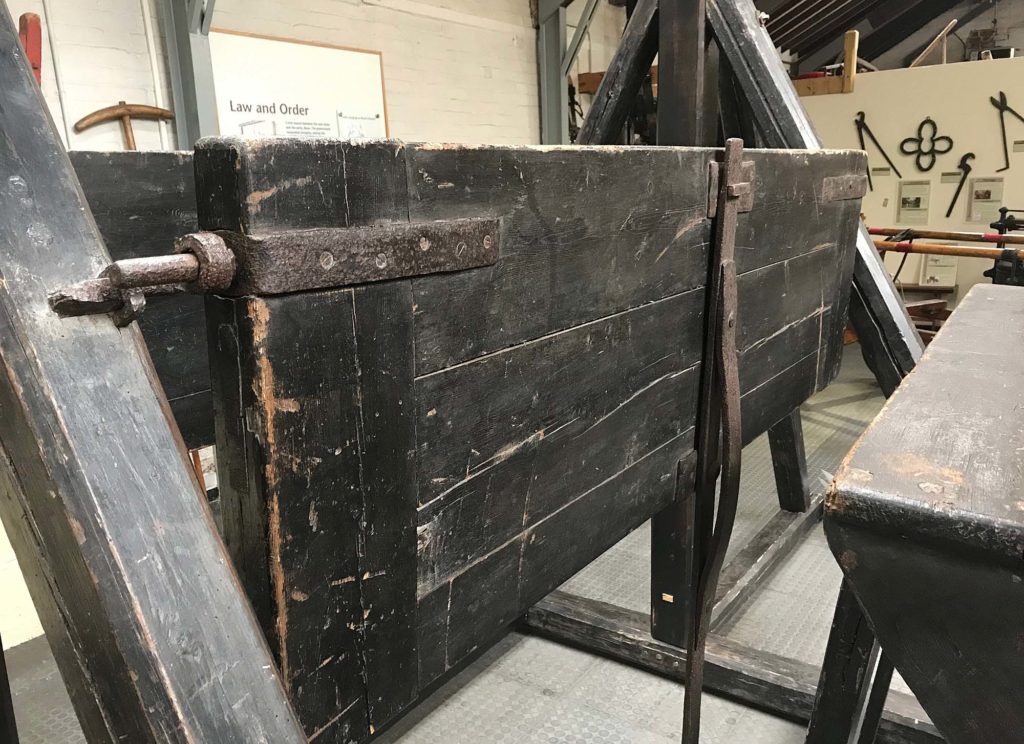 There are three holes in the crossbeam – for three ropes – so we believe they were made for a particular execution at the new gaol, which opened in Oakham in 1810.

In 1813, at the Assize court held at Oakham Castle, three men were sentenced to death by hanging. Only two were executed – William Almond and John Holmes – because the third, Henry Millington, turned evidence against his co-accused and his sentence was commuted to transportation to Australia. So on this occasion only two of the three ropes were used.

Almond and Holmes were convicted of burglary, “feloniously and burglariously” breaking and entering. Almond and his accomplice Millington stole pewter and silver plate from the dwelling of the Rev. Richard Lucas and Holmes had removed drapery goods at another robbery. With previous convictions it was likely they’d be sentenced to death. People were hung for much lesser crimes; in a rural area like Rutland for example crimes involving theft of livestock were considered to be serious capital offences.

“Dr Doncaster encouraged boys to go, to teach them what happened to those who broke the law”

In 1824, about 11 years after Almond and Holmes, a 70-year-old Irish hawker and traveller named Patrick Duffy was convicted of raping Elizabeth Robinson on the Great North Road within the county of Rutland and was sent to the gallows. Two years later in 1826 Jacob Bozolander, alias William Welsh was executed. He was convicted of assault and highway robbery on Mary Waters at Barrowden, both being capital offences.

There are several accounts of the Oakham executions in local newspapers and a couple of broadsheets were produced particularly for the Almond and Holmes execution. They describe the moment the prisoners were brought out from the gaol, their conduct on the gallows and their mood.

There’s also a published account of a hanging in the memoirs of an old schoolboy which appears in the Oakham School Magazine of 1892. Apparently the headmaster of the time, Dr Doncaster, used to encourage boys to go, to teach them what happened to those who broke the law. The account’s author wrote that “perhaps the good Doctor was right in letting us go, for it certainly made a serious impression upon some of us”. 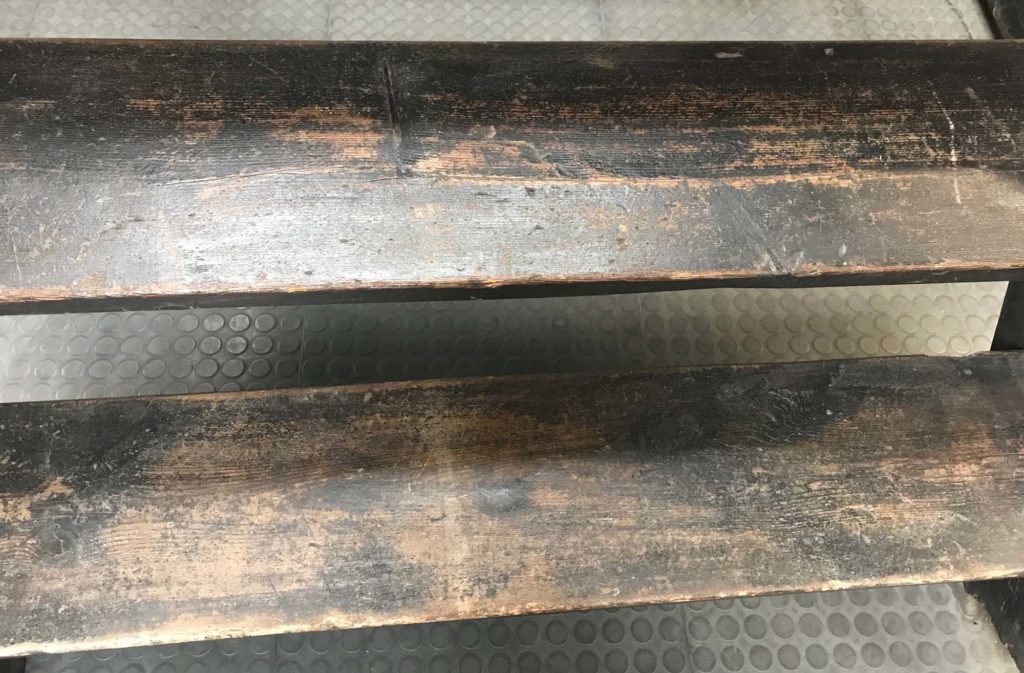 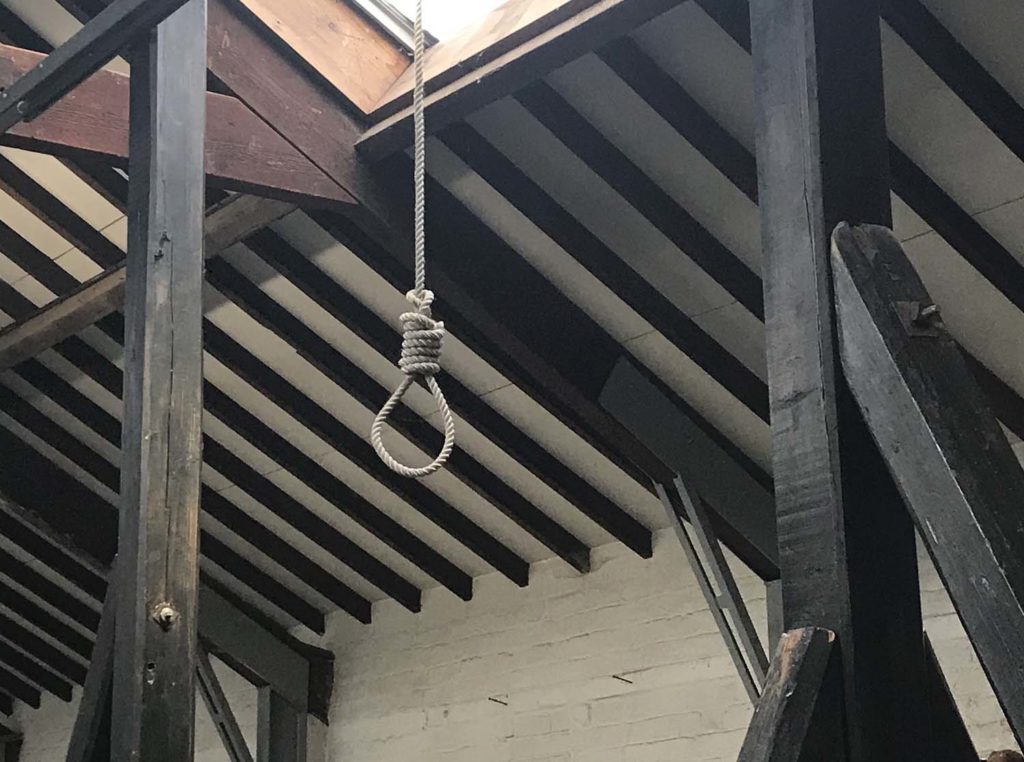 Executions were a public spectacle and thousands of people would often watch. For the execution of John Perkins in 1833, the last on the New Drop gallows, the weather was particularly bad and the local newspaper reported that not many people turned up – ‘probably only several thousand’ – which makes you wonder how many turned out on a good day?

Thankfully only five executions took place on these gallows in Oakham and although many were sentenced to be executed, their sentences were generally commuted and most were transported to Australia. Public executions happened in Britain until 1868, after which people were executed inside gaols, but there were no executions in the county of Rutland after 1833.

The gallows were donated to us in 1973 by a family called Smith who had a long connection with the town of Oakham. Several generations of Smiths were caretakers at Oakham Castle which is where prisoners at the gaol were brought for the Assize Courts. When the gaol closed in 1878 the Smith family bought the gallows along with manacles, chains, handcuffs, leg irons, pistols and cutlasses once used in connection with Oakham Gaol. Why they had an interest in that kind of thing I do not know, but I did have an opportunity to speak to the granddaughter of the donor and she said her grandfather was a real collector who “used to store a lot of things at Oakham Castle”.

After restoration in 1997 the gallows became the centrepiece of a temporary exhibition, after which they were taken down; they were always designed to be demountable, like a flat pack, to be put up as and when required at the gaol. 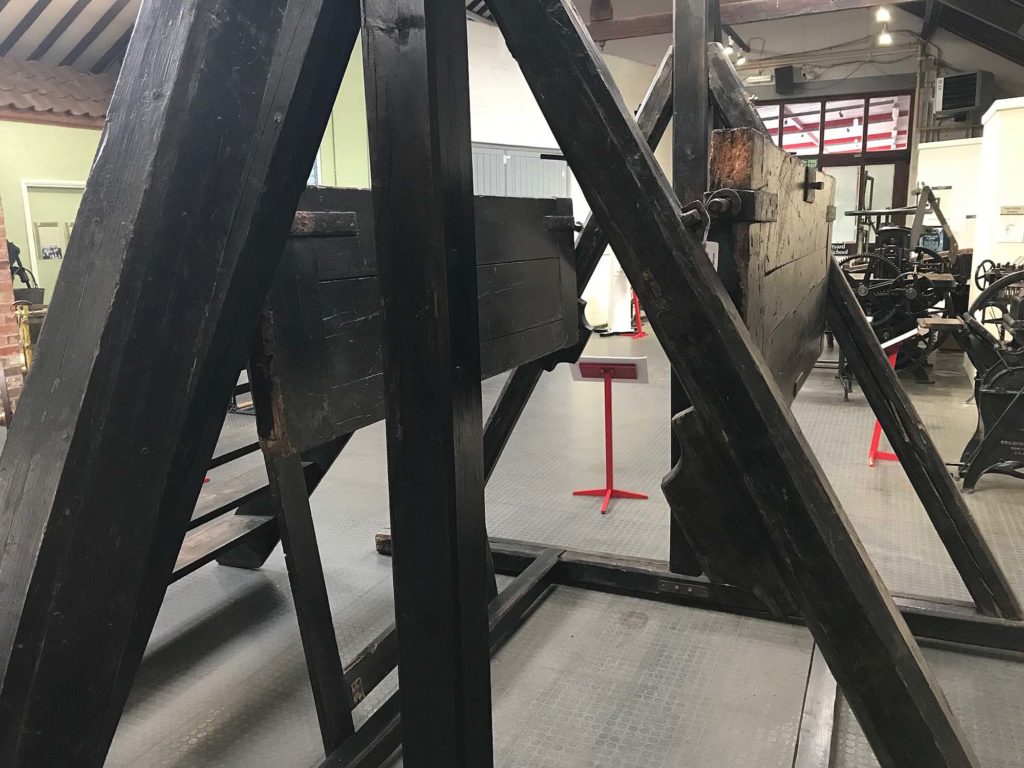 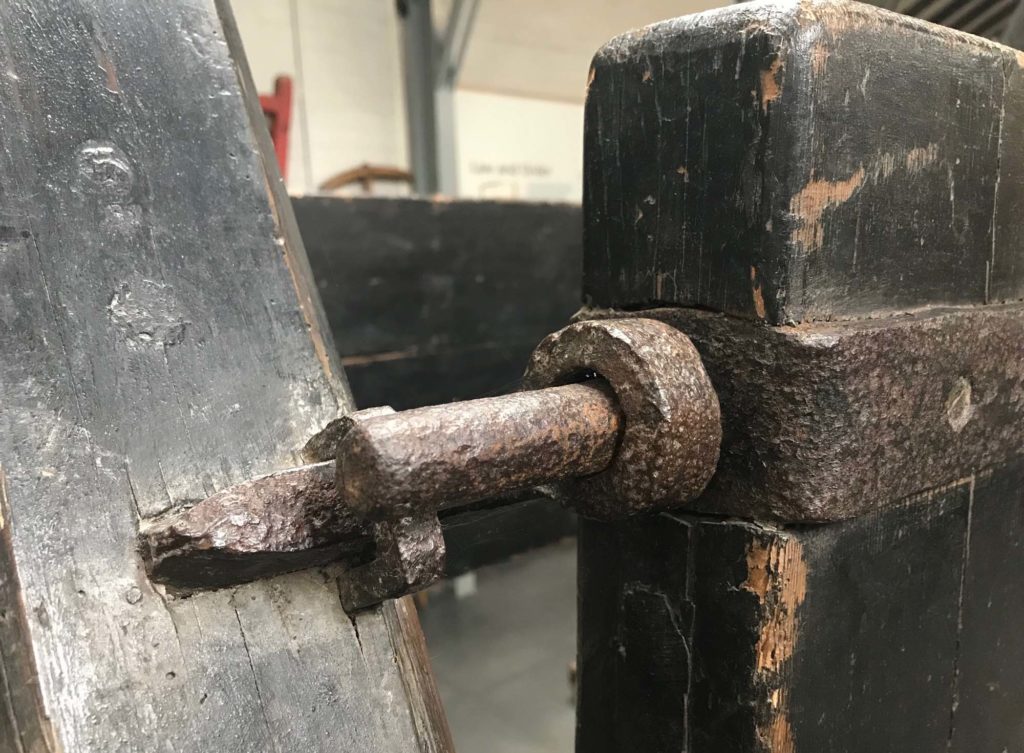 Later, when the museum put them back on permanent display, we asked the public what they felt about the gallows and overwhelmingly people were in favour of displaying them. They said: ‘it’s part of our history, let’s learn from it, let’s improve our society’. There were a few people who were very sensitive about their presence, but I would say the vast majority were in favour of us having them on display.

And that’s the way I feel about it. Yes, I look at them sometimes and think: ‘five men were put to death on that contraption’, but we have moved on, we don’t execute people in this way anymore, we don’t execute people in this country at all, but we can’t write things out of our past. Quite apart from their rarity, they’re part of our history and we can’t sanitise history – we have to take it warts and all.

The new drop gallows are on permanent display in the Poultry Hall at Rutland County Museum in Oakham.

Rutland County Museum is the perfect introduction to England's smallest county. The Museum is a guide to the history of Rutland and includes displays of local archaeology, history and an extensive rural life collection. The site itself is also remarkable as the Museum is set in the old riding school…