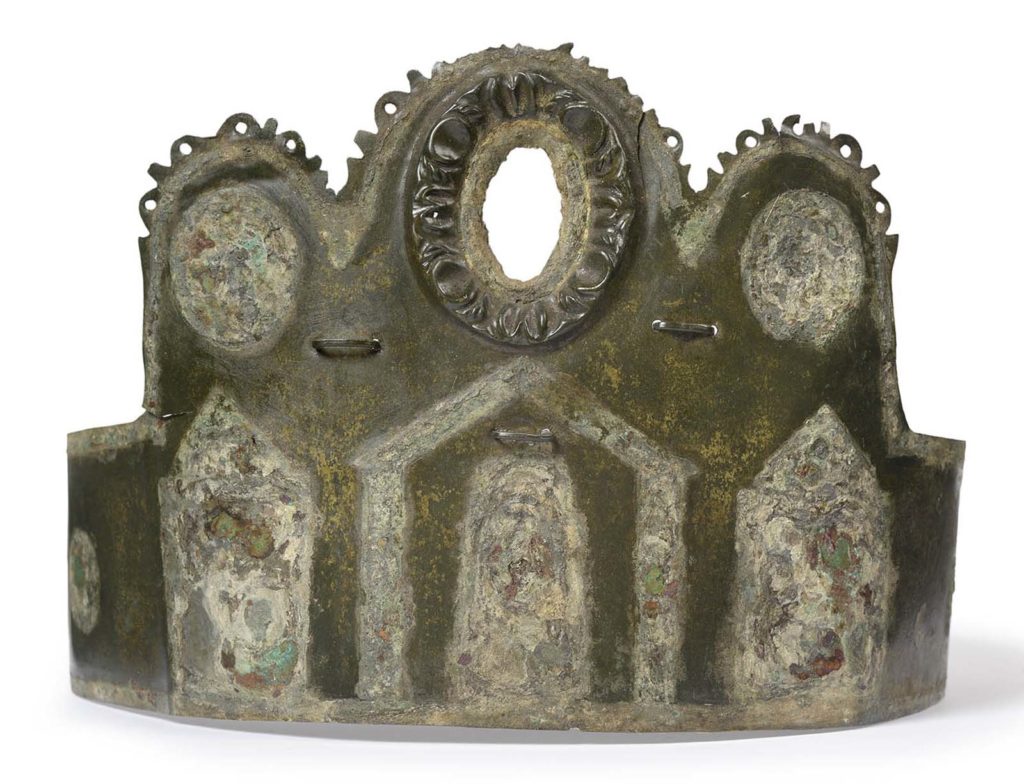 This crown is one of two found at Cavenham, Suffolk in 1925 and is believed to have been ritually buried. Although its use and what it represented is hard to interpret, most experts agree it is a Roman priest’s headdress.

The rare ancient object is being re-explored in the exhibition Adorn: Jewellery, the Human Story at Colchester Castle and will, for the first time, be displayed alongside a replica of what it may have looked like when it was worn by a Roman priest more than 1,600 years ago.

Its unusual design has prompted archaeologists to agree that it probably represents a fusion of Roman and Celtic religious practices. And, given its find location, a link to the Iceni Tribe of Boudicca fame is another possibility.

A far older crown found in a burial in Deal in Kent even implies a possible link with the enigmatic druids who were supposedly wiped out by the Roman invaders. Perhaps the Cavenham Crown is a lost link with this ancient religion?

Colchester Museums’ curators now believe the crown may date to the 4th century AD, adding to growing evidence of a pagan revival at a time when Christianity was dominant in Britain.

The crown would have originally dazzled: appearing golden and was probably adorned with metal feathers and glass or gems. Its front would have been decorated with Roman or ancient British gods, pictured in their temples.

Glynn Davis, Senior Curator for Colchester + Ipswich Museums Service, says: “This is an extraordinary object. It may not be as obviously beautiful as the other jewellery in the exhibition but the mystery behind its wearer and what it would have represented make it intriguing.

“Was it indeed worn by a Roman priest? And, if so, what power would this individual have held in ancient Roman society?”

The Adorn exhibition showcases over 200 objects exploring our fascination with jewellery from over 3000 years of history and features an array of archaeological treasures; including the Boss Hall Anglo Saxon Brooch, The Bronze Age Woodham Walter Hoard and various Roman artefacts including a Medusa medallion, satyr gemstones and moon bracelet.

Adorn – Jewellery: The Human Story is at Colchester Castle Museum from July 27 – February 16 2020 and is free after Castle admission.

A visit to Colchester Castle Museum takes you through 2000 years of some of the most important events in British history. Once capital of Roman Britain, Colchester has experienced devastation by Boudica (Boadicea), invasion by the Normans and siege during the English Civil War. Since the 16th century, the Castle…