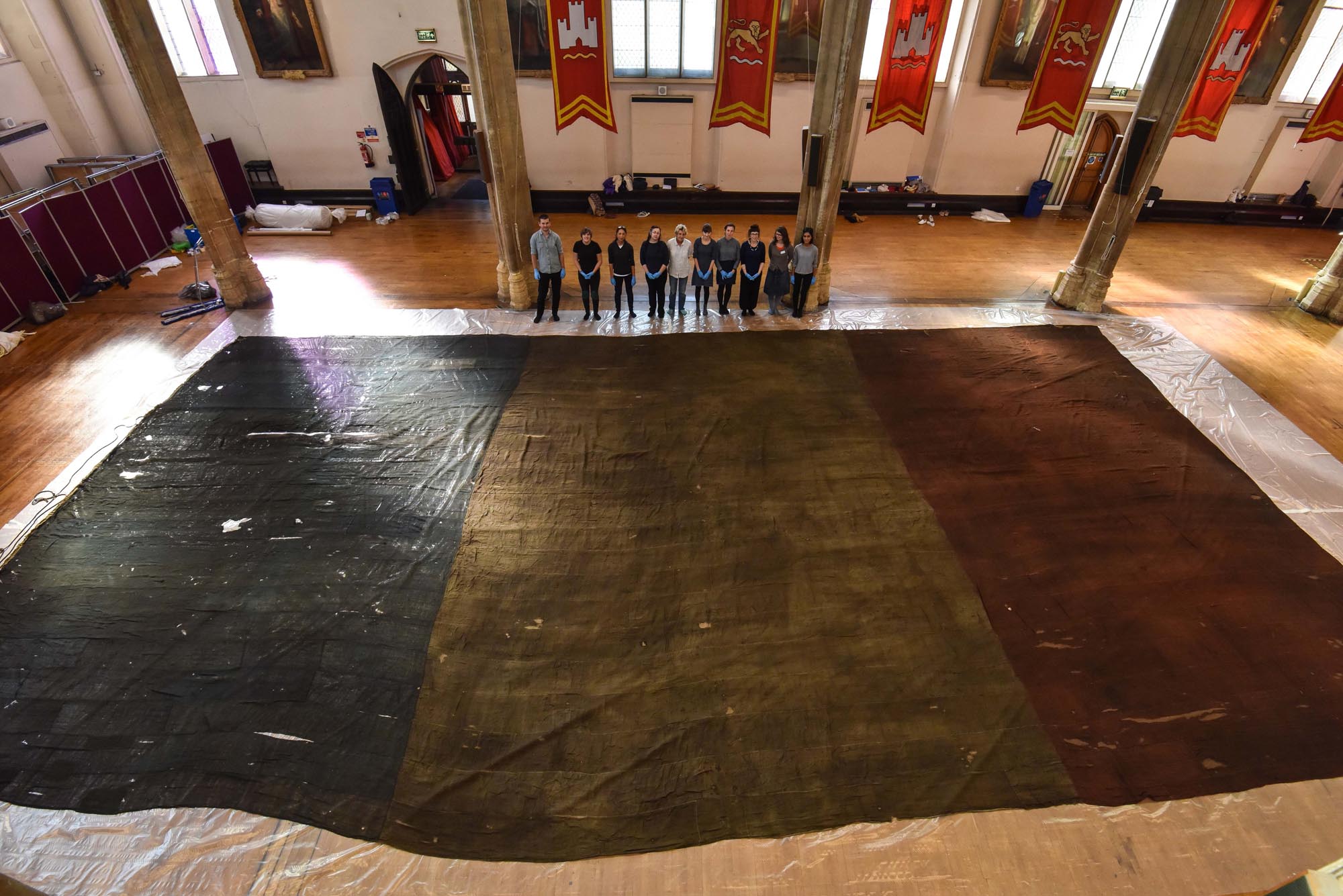 The Ensign of Le Généreux.

This vast Tricolour is a Napoleonic-era ensign captured from the French warship Le Généreux by Captain Sir Edward Berry in February 1800.

A remarkable survivor from the Trafalgar-era, when sea battles were fought in sailing wooden warships, the ensign measures 16 metres by 8.3 metres and was given as a gift to the city of Norwich by Captain Berry and Admiral Lord Nelson immediately after its capture. But due to its fragile nature it has not been on display for more than 100 years.

Norfolk Museum Service is now conserving the fragile flag and crowdfunding to raise just £5,000 towards the £40,000 cost of putting it back on display for a new Nelson-themed exhibition, Nelson and Norfolk, opening on July 29 at Norwich Castle.

The story of the ensign’s capture from Le Généreux is the stuff of naval legend. Le Généreux was one of only two ships of the line from the French fleet to escape the 1798 Battle of the Nile, the victory that sealed Nelson’s reputation as England’s greatest maritime hero.

A few days after the battle, the French ship succeeded in capturing the smaller British ship, HMS Leander, which was transporting Nelson’s flag captain, Edward Berry, carrying the dispatches from the Battle.

Berry had a reputation as a fighter and for a time was one of Nelson’s most trusted captains. The great admiral who had famously lost his right arm during the Battle of Santa Cruz de Tenerife in 1797, once referred to Berry as his “right hand”.

The Battle of the Nile, 1 August 1798, End of the Action, 1799 by Thomas Whitcombe
© National Maritime Museum, Greenwich, London

But on this occasion his fighting skills were no match for the larger French ship. The fierce encounter, in which Berry himself was wounded in his right arm by a piece of flying skull, ended in the British captain’s capture and he didn’t make it back to England until December 1789, by which time news of the Battle of the Nile had spread across the nation. When he returned to his native Norwich, Berry was welcomed as a hero.

Le Généreux, meanwhile, was still at large and went on to elude the British navy in the Mediterranean for a further 18 months until running into Captain Berry once again in February 1800.

This time Berry, in command of a larger ship, HMS Foudroyant, had the upper hand and succeeded in capturing Le Généreux. The French ship’s Tricolour Ensign was ‘struck’ – removed from the flagpole at the rear of the ship – indicating that she was no longer in battle.

The immediate dispatch of the Ensign after its capture to the City of Norwich by Captain Berry and Lord Nelson, who was born in Norfolk, reinforced their affection for the county and showed a keen awareness of the powerful role that gift-giving played in the creation of reputation and sustaining a legacy.

Duly placed on display in the medieval splendour of St Andrews’ Hall, it was draped around the west window of the friary as an emblem of Nelson’s esteem for his birth county.

It was then kept on display until 1897 when it was placed in Norwich Castle Keep for the 1905 Centenary of the Battle of Trafalgar. It has not been publicly displayed since then. 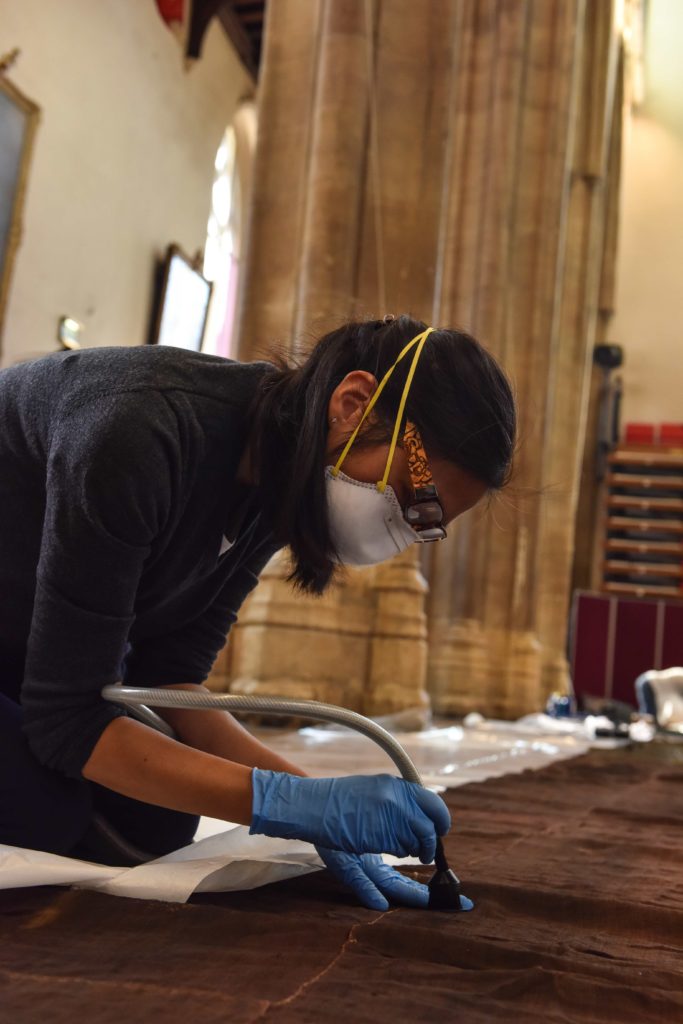 The Ensign was the second trophy sent home to Norwich. In February 1797, a mere 12 days after the Battle of Cape St Vincent, Nelson wrote to the Lord Mayor of Norwich offering the sword of Spanish Rear Admiral Winthuysen, which had been surrendered after the capture of the San Josef.

The sword will also be included in the exhibition Nelson & Norfolk together with other treasures from the period such as the black velvet drape from Nelson’s funeral car, the coat he wore at the Battle of the Nile and scraps of British ensign and sail cloth from the Battle of Trafalgar.

But it is the flag – dating to the era when national flags fluttered amidst the chaos and cannon smoke to identify friend and foe – that is the undisputed star object.

Experts believe the ensign to be one of the earliest Tricolours in existence.

A team of conservators and volunteers have been working round the clock to clean, dye and add a new backing in readiness for the new display. The ensign has survived its long period in storage remarkably well with the blue, white and red colours clearly visible and contemporaneous patches and repairs showing its eventful history.

The meticulous and careful cleaning has also revealed some exciting finds – including a nail hammered through the rope, which would have been used to ‘nail the colours to the mast’, fragments of wood, likely to be splinters from battle-damaged ships, and traces of gunpowder.

Experts also believe the ensign to be one of the earliest Tricolours in existence. The design of the Tricolour as we know it today with the order of colours from left to right running blue, white and red was officially adopted on 15th February 1794.

The ensign installed at that point is quite possibly the same one, which went on to be present in 1798 at the Battle of the Nile and was then captured by Captain Berry in February 1800. If so it could be the world’s oldest surviving Tricolour.

As for Berry, he went on to command HMS Agamemnon at the Battle of Trafalgar, which he survived – unlike his mentor Nelson. In 1814 bought a house in Norwich and by 1821 had attained the rank of Rear Admiral. He died at his residence in Bath in 1831.

The exhibition presents some of the most extraordinary and potent objects connected to Nelson, from his boyhood in Norfolk to his death at the Battle of Trafalgar in 1805. Take a closer look at some of the artefacts in the slider below:

Help get the flag back on display by donating to the Just Giving page
Nelson & Norfolk, Saturday July 29 2017 to Sunday October 1 2017 at Norwich Castle Museum & Art Gallery