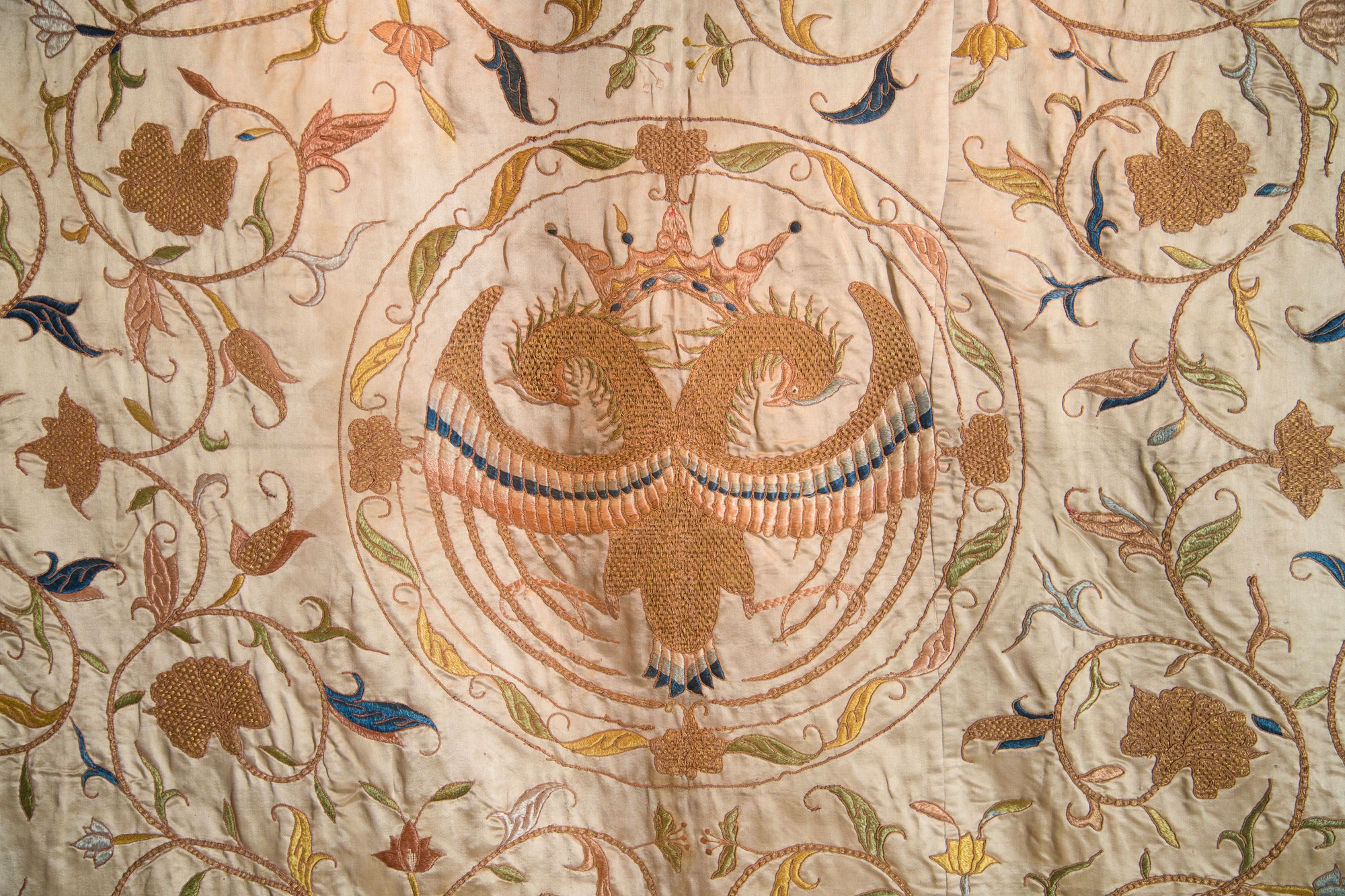 A 300-year-old bedspread, a gift from King James II to a loyal family, goes on display at Sizergh in Cumbria, England

When King James II of England went to bed in the 17th century, he probably snuggled up in the most sumptuous and lavish quilts, such as this magnificent satin bedspread with its mythical creatures picked out in gold thread.

It took seven National Trust staff three hours to unroll the 3m x 2.5m counterpane, which is thought to have originated from Goa in India, in preparation for its display as part of the medieval house’s new The Sizergh Silk Road: From Goa to Antwerp exhibition. 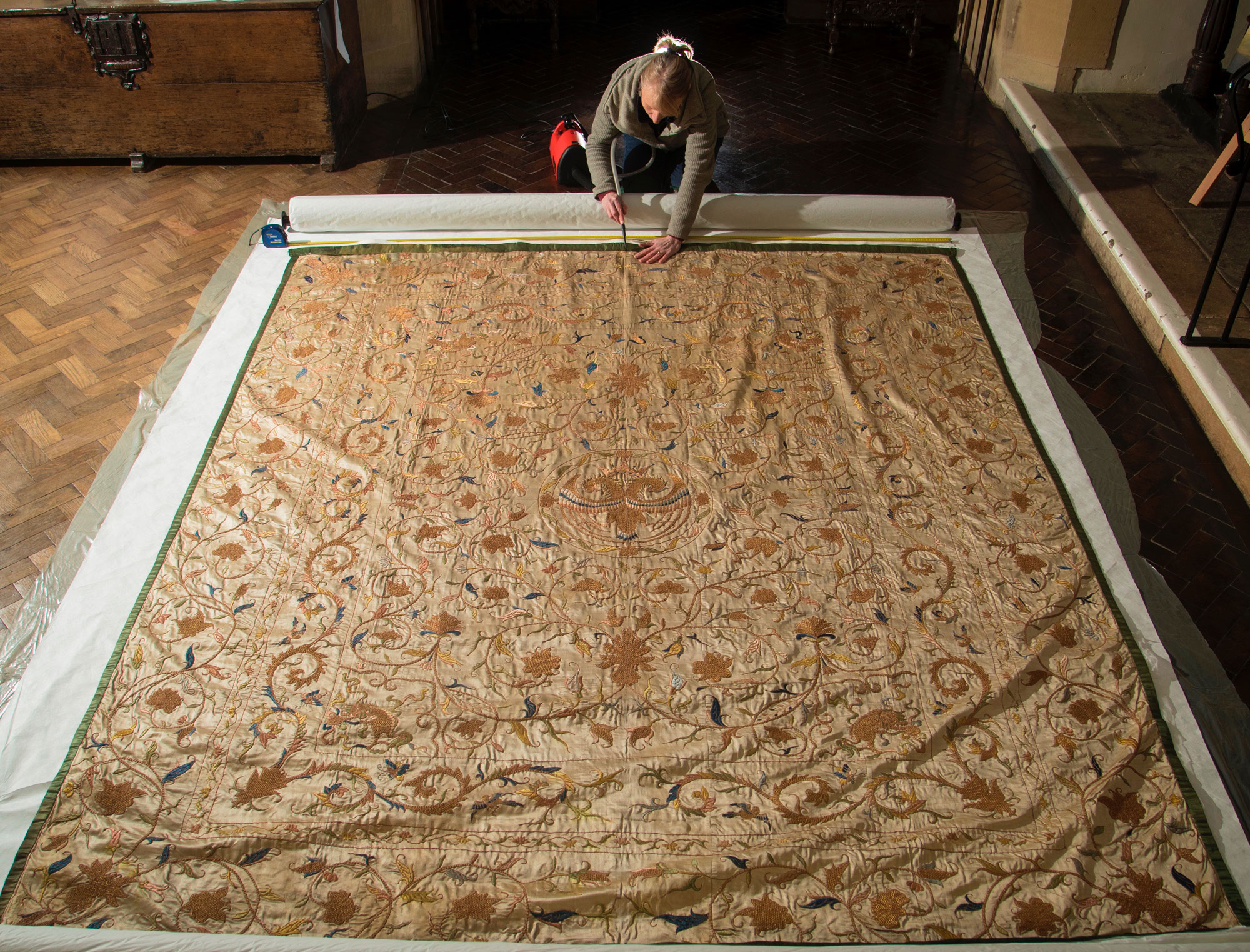 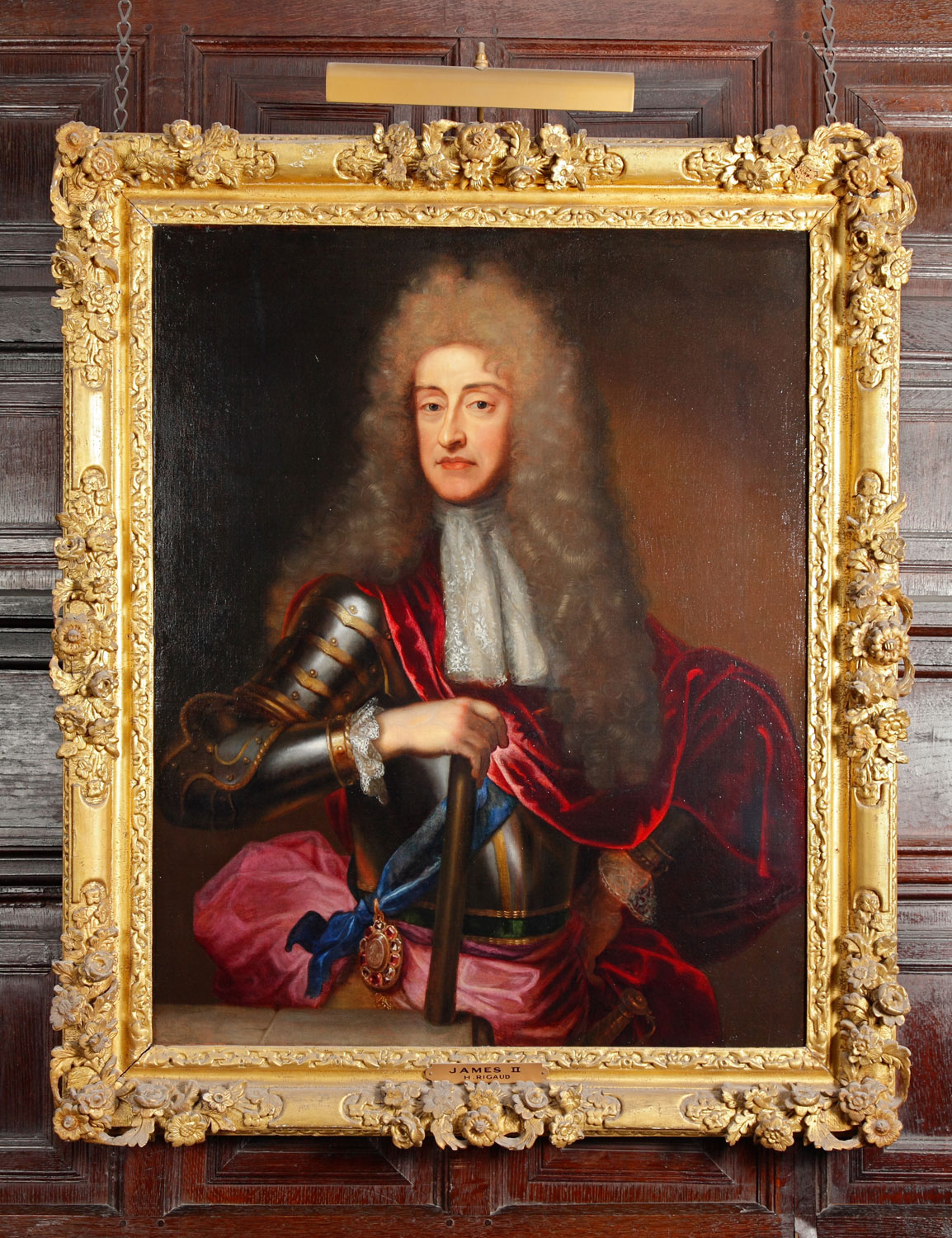 James II gifted the bedspread to some of his loyal supporters 300 hundred years ago and the rare artefact has been conserved by the National Trust for display for the first time in more than 30 years.

“The bedspread had been in storage for more than 30 years, so we didn’t know what to expect,” says Jane Clarke, House Steward at Sizergh. “We had to work incredibly slowly to support it and prevent any stretch or tension, which could cause irreparable damage to the fabric. Finally seeing it unrolled, its intricate details and colours still vibrant, was fabulous.”

The bedspread’s centrepiece is a double-headed eagle surrounded by flowers, butterflies and birds, while the corners feature unidentified creatures, possibly stylised leopards or lions. It also includes a number of different stitches and techniques including basket weave, ‘laid couching’ to outline motifs and satin stitch worked in unspun silk. 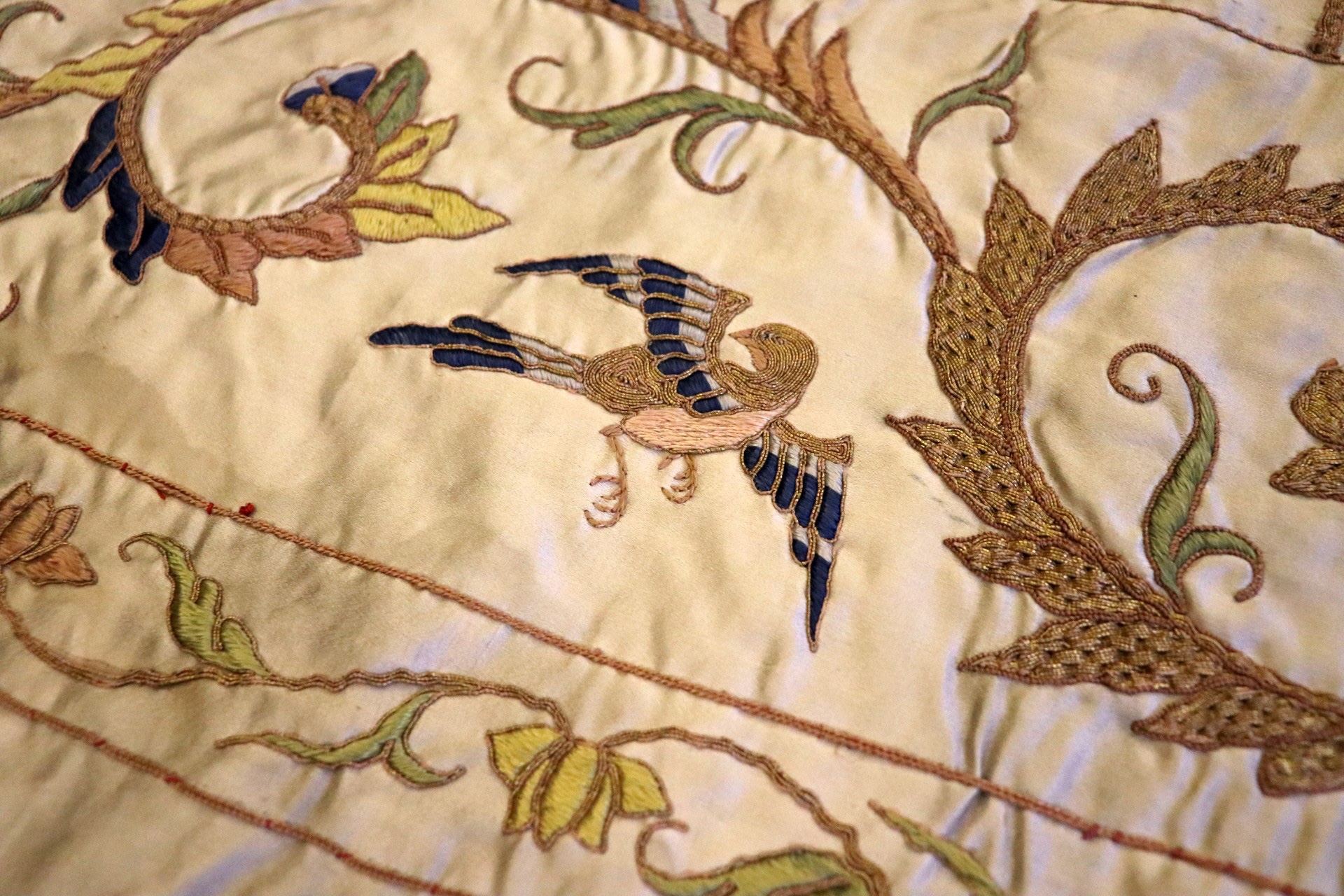 “There were some very beautiful textiles coming out of Goa, then a Portuguese colony, in the 17th century, and this is a particularly wonderful example with spectacular imagery,” adds Clarke. “Our best guess is that the eagle on it is a Hindu mythical beast, but if visitors know more, we would love to hear their ideas.”

The Indian bedspread was gifted to the Strickland family of Sizergh in the 1600s in thanks for their loyalty for accompanying the last Roman Catholic monarch of England, Scotland and Ireland into exile.

Sir Thomas and Winifred Strickland were prominent Catholic royalists and were considered close friends of the King and Queen. They eventually accompanied them into exile in France in 1688, with Lady Strickland serving as acting Governess to the Prince of Wales. Other gifts they received included a lock of the King’s hair and the Queen’s collection of Imari porcelain.

Over the coming months the exhibition will allow visitors to learn more about how the delicate fabric at Sizergh is cared for and see a specialist textile conservator working on the bedspread at selected times.

The house is also highlighting a set of five 17th century Flemish tapestries depicting Antony and Cleopatra. The wall hangings show Plutarch’s (and subsequently Shakespeare’s) famous stories and are the largest surviving weaving of this series in the world.

Later this year, the first tapestry in the set, ‘The Meeting of Antony and Cleopatra’, will travel to Belgium for urgent specialist treatment worth £77,000 to restore its colour and condition. Sizergh will be raising funds through raffle tickets and donations.

The house is open on Tuesday-Sunday at 12-4pm, from 16th March-27th October and is free to enter for National Trust members. The gardens, shop and café are open 7 days a week.

Medieval house extended in Elizabethan times, with handsome gardens. Originally built in the Middle Ages by the Strickland family, who still live here, this imposing house has an exceptional series of oak-panelled rooms culminating in the Inlaid Chamber. Portraits, fine furniture and ceramics accumulated over centuries by the family are…