A facial reconstruction expert spent four hours reworking the head of King Richard III, which was removed from display at the new Richard III Visitor Centre in Leicester after DNA testing at the city’s university suggested he would have had blond hair and blue eyes.

A Medieval Maiden from Edinburgh

A series of forensic reconstructions brought the medieval men, women and children found at a burial ground in Edinburgh eerily to life. This medieval female was found with several other women and children in a communal grave. It is unclear if her death and those buried with her were related to the plague or some other infectious disease.

Forensic artists interpreted examinations on the remains of almost 400 men, women and children from the South Leith Parish Church graveyard, which was excavated during preparation work for Edinburgh Trams in 2009. None of the graves were created after 1640, with the earliest dated to the 14th century and three-quarters of the burials being complete rather than fragmented.

Beachy Head Lady was assumed to be a third century European Roman until experts took a closer look. They found her to be a sub Saharan African living in the Eastbourne area. “Whether that means that she’s first generation we don’t know,” said Heritage Officer Jo Seaman. “She could possibly have been born in Africa and brought over here at a very young age, but it’s just as likely that she was born here.”

Archaeologists are still unsure about her social status. Her teeth and bones were both in good condition, but that doesn’t mean she was either of higher status or a favoured slave – it could be either.

A virtual sculpture of the face of Mary, Queen of Scots, made with craniofacial templates based on how she would have looked during her 16th century reign, gazed at visitors to the National Museum of Scotland’s 2014 show about the tumultuous life of the monarch.

No portrait records of Mary exist from the period, but Professor Caroline Wilkinson, from the University of Dundee’s Forensic and Medical Art Research Group says the “striking face” – viewable from several angles – is a reflection of the “enormous challenges” the queen faced while in power.

This reconstructed head of an early Neolithic man is based on the skeleton of an adult male excavated in 1863 from a long barrow at Winterbourne Stoke, Wiltshire. On display at the Stonehenge Visitor Centre with his upright skeleton beside him, he was born roughly 500 years before the circular ditch and banks, the first monument at Stonehenge, were built.

Skeletons preserved in such good condition from the early Neolithic period are very rare. Radiocarbon dating shows that the man died between 3630 and 3360BC. His teeth showed that he was born away from chalk areas, perhaps somewhere in south west Britain or west Wales, and moved to the chalk geology later in life.

The best-preserved 4,000-year-old skeleton in Britain, the Bronze Age Gristhorpe Man, was found in 1834 in a makeshift grave inside a coffin made out of a hollowed-out Yorkshire oak tree. The preserved skeleton, stained black by the tannic acid in the oak, was wrapped in an animal skin and accompanied by a range of grave goods including a bronze dagger blade with whalebone pommel, flints, and a bark vessel containing food residue.

In 2010 he spoke across the centuries after a CT scan on his skull – courtesy of Bradford Royal Infirmary – showed that he was in his early 60s, allowing experts to make this dramatic computerised recreation.

This tough looking character is in fact a Medieval Knight – a sword-swinging War of Independence warrior whose brutally executed skeleton was discovered buried in a forgotten chapel at Stirling Castle in the late 1990s.

Experts believe the very strong and fit nobleman with the physique of a professional rugby player, would have been trained since boyhood to handle heavy swords and other weapons. He met a violent end – his bludgeoned body was found in a mass grave of 10 skeletons thought to have been slaughtered in a siege during the Anglo-Scottish wars of the late 13th and early 14th centuries.

“You can look into the eyes of the crew,” promised staff as the remarkable New Mary Rose Museum opened at Portsmouth Historic Dockyard. Meeting this archer’s gaze as he stood next to his skeleton certainly offered a window into the past. Apparently the archer’s profession had ruined his shoulder joints so he “wouldn’t have been much use on the guns”.

But at 5 feet and 10 inches he was taller than many of the crew and well-built with particularly strong legs. Despite only being in his early 20s the middle of his spine was twisted – a feature often seen on skeletons found with archery equipment. One of his right finger bones showed grooves on the inside, forming a ridge, which could have been made by repeatedly pulling a longbow string.

This striking recreation of a young woman (age 26 – 35) is just one of several murder victims recovered from a mass burial found beneath an Edinburgh car park in 1975. The skeletons, dating to the 6th century, included two murdered warriors and at least two generations of the same family.

She is thought to have died between 430 and 550 AD and isotopic analysis reveals she grew up locally and spent her final years in and around Cramond, a royal stronghold believed to be the oldest occupied village in Scotland. Forensics also reveal poor teeth and an iron deficiency.

With kind permission of Rab Wilson

This life-sized model of Robert Burns’ head was reconstructed by forensic scientists, including Professor Caroline Wilkinson of Dundee University, in 2013 using a 3-D scan of a cast of the cranial part of Burns’ skull.

The jaw was missing so the experts used orthodontic techniques, surviving portraits and the Myers silhouette made during The Bard’s lifetime to create a balanced view from as many sources as possible. The resulting recreation revealed how large the bard’s head and eyes were – bigger than average. 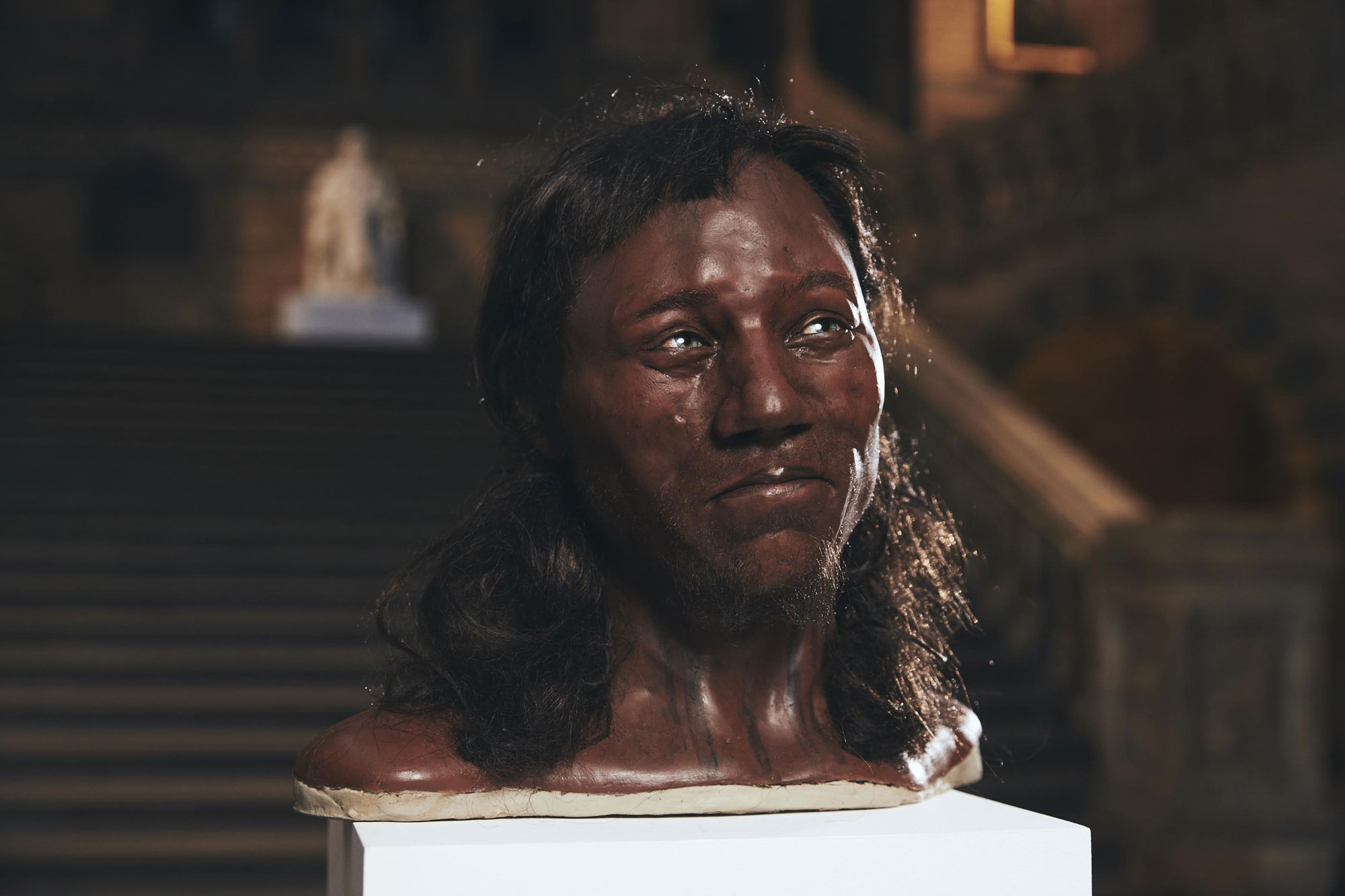 The oldest Briton to have their Genome sequenced, Cheddar Man lived 10,000 years ago; his skeleton was unearthed in a cave at Cheddar Gorge in 1903. Analysing the sequence gave valuable information about Cheddar Man’s appearance, and suggested that he would have had very dark skin, dark curly hair and blue eyes.

Using high-tech 3D scanning and printing technology, as well as DNA obtained from the Cheddar Man’s skull, the team working with the Natural History Museum’s ancient DNA lab were able to create the features of this ancient Briton, born 300 generations before us.

Brighton residents from the Ice Age to the Saxon era

These five models are reconstructions of early residents of Brighton & Hove, living from the Ice Age to the Saxon era. The forensically-accurate 3D reconstructions are based on the DNA of skeletons found in the local area, which are also on display alongside the models. The reconstructions demonstrate that people from a variety of different places have settled in Sussex over the past several thousand years.

The in-depth scientific analysis has revealed key features about the skeletons, including skin, eye and hair colour, while analysis of the bones alludes to the health and lifestyle of the individual, such as the oldest, Whitehawk Woman, who is believed to have died in childbirth, and Ditchling Road Man, who suffered malnutrition from a poor diet.