In 789 AD three longships set off from the Nordic coast, carrying with them the first Viking raiders to reach British shores. These early Vikings landed at Lindisfarne, where they sacked the Christian monastery, stole books and treasures and murdered the resident monks. From these brutal beginnings the Vikings went on to become an integral part of British society. These are the best places to marvel at Viking artefacts and discover the treasures, terrors and influence they had on Britain 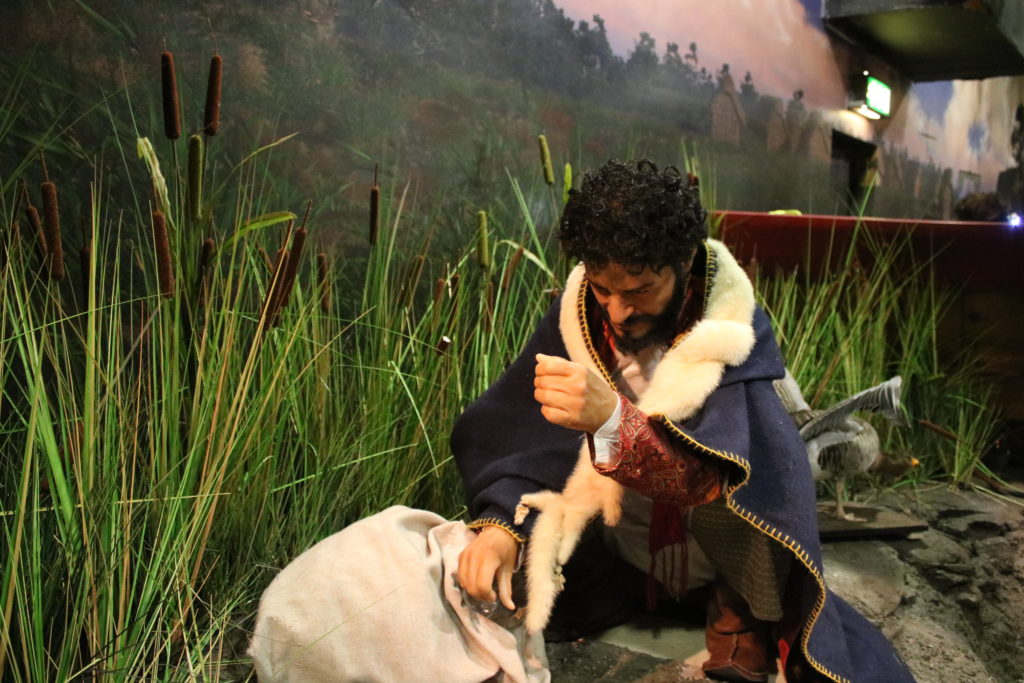 Jorvik Viking Centre is more than a museum; the animatronic Vikings pull you back in time while the smells and sights of eighth century Britain truly bring the history alive. The theme park-esque ride transports you through the daily life of Viking-age Europe, complete with hunters, traders, blacksmiths and fishermen.

Built on a key part of the Viking city of Jorvik, visitors can delve 6 metres underground to discover the remains of a Viking hearth and walls that made up the historic city. Through the clever use of touchscreen and projected films you can recreate the discovery of the Jorvik artefacts, much like the archaeologists of the 1970’s.

The Jorvik Artefact Gallery brings you back into the modern world, into a beautiful museum with some intriguing and enlightening artefacts.  Over 250,000 pottery pieces and 40,000 individual objects allows the York Archeological Trust to curate the perfect selection that both teaches and inspires and offers the perfect place for anyone with an interest in our Nordic ancestors.

House of Manannan
Isle of Man

Another delight for the senses, the House of Manannan makes use of reconstructions, characters, sights and smells to demonstrate how Celtic and Viking cultures merged together on this little island in the Irish Sea.

You can journey through the life-size reconstruction of a Celtic roundhouse to understand the gains and strains of island life. Or join the crew of the famous Viking longship Odin’s Raven, as you reimagine the perilous quests that were made across the rough North Sea.

Visitors can also uncover the stories behind the magnificent stone crosses that litter the island and learn how they represent a union of Viking and Celtic culture.

The Kingdom of Mann Gallery brings visitors into close contact with an inspired collection of Celtic and Viking artefacts, which shed light on the Island’s maritime past and the importance of the sea to its people. A fascinating insight into Manx cultural heritage.

The Dock Museum is a great all rounder, their collection stretches from hand axes, made during the Neolithic period (3500BC – 2000BC), right up to boardgames made in the 1970s. In our opinion however their most important collection stems from the Furness Hoard, a huge collection of Viking and Anglo-Saxon coins and artefacts discovered in 2011.

The Hoard is the largest collection of Viking treasure ever found in the area and tells us huge amounts about the trading and politics that went on at the time. Consisting of 92 silver coins and numerous ingots and arm-rings the hugely important archaeological find make this an important stop off for fans of the Viking period.

As well as the Hoard, the Museum is home to a number of other Viking artefacts including swords, weights and a spindle whorl, all of which illustrate the richness and complexity of Viking life. Younger explorers have the chance to try on a helmet and cloak replica for the complete Norse experience.

Home to one of the most important Viking discoveries ever made in Britain, the Vale of York Viking Hoard, Yorkshire Museum brings together a number of Viking and Anglo-Saxon artefacts to demonstrate the wealth and strength of Viking Britain.

The Hoard was discovered in North Yorkshire in 2007 by metal-detectorists David and Andrew Whelan. Contained within a gilded silver cup were a massive 617 coins as well as 67 silver and gold artefacts, including a rare gold arm-ring.

The value and magnitude of the find is expressed in the Museum’s halls and other complimentary artefacts, such as the Gilling Sword and the Coppergate Helmet, which emphasise the wealth and status of Jorvik and the wider Danelaw.

A current exhibition in 2017 brings together one of the most important collections of Viking artefacts ever seen. Viking: rediscover the Legend is a partnership with the British Museum, which means the stunning collections of Yorkshire Museum are displayed together with other significant hoards from across the country to offer a fresh perspective on how the Vikings shaped Britain.

If you want to immerse yourself in Viking daily life then this is the place to do it. The Ancient Technology Centre in Dorset is home to a 26-metre, bow sided Viking longhouse, constructed with traditional materials and techniques to provide a truly immersive experience.

Visitors have the chance to spend a day and night in the longhouse, abandoning their modern wears for Viking tunics, dresses and belts. Your day will be spent completing farm and house work including making fences, tending to animals and churning butter.

In the evening, a simple meal is prepared and Viking games, riddles and toys keep you entertained until it is time to unroll the sheepskin mats, close the leather windows and bunker down for a very Viking night’s sleep.

The learning centre teaches visitors about the techniques and technologies that went into ancient house building.

Scotland was a common landing ground for approaching Norse invaders and, as a result, has a hugely rich collection of Viking and Anglo-Saxon artefacts. The most famous and most beautiful of these is the recently discovered Galloway Hoard. An astonishing treasure trove of Viking artifacts that is only just beginning to offer up its secrets, National Museum Scotland is currently fundraising to buy and conserve it. Part of it currently on display at the museum and, if the funding bid goes to plan, the hoard will be making appearances at museums across the country.

Other Viking artefacts include the Hunterston Brooch, examples of the famous Lewis Chessmen and the St Ninian’s Isle Hoard – all of which hint at a highly developed trade system between the Vikings and the wider world.  The Galloway Hoard is on display until 1st October 2017. 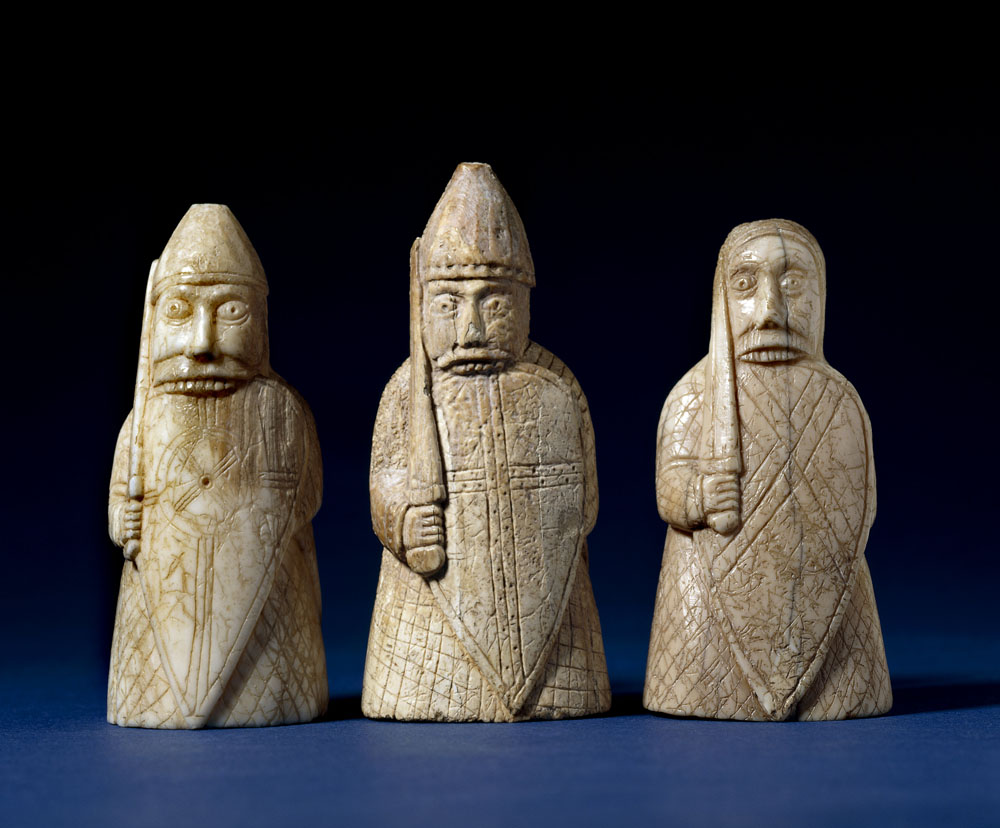 The British Museum is an obvious choice for those wishing to learn more about Viking life, and culture and for good reason; they have a vast collection of Viking objects although it is worth checking which are on display when you plan to visit.

Famously, the collection is home to the Lewis Chessmen, which tell the story of Viking world trade and are well worth a visit. The Chessmen attest to the strength of relations between the British Isles and the Nordic states around the first millennium AD, as well as offering a spotlight into medieval society, with different groups being represented in the pieces. The Rooks, shown above biting their shields, resemble Viking berserkers of Norse myth.

As well as these important Viking artefacts the collection also houses the Sutton Hoo helmet and longship which complement the Viking collections and allow visitors to compare the two distinct cultures that lived and battle side by side.

The journey across the tidal causeway to reach the Holy Island of Lindisfarne is enough to stir images of invading Viking ships and terrified, trapped monks. This was the site of the first recorded Viking raids on British soil and the beginning of the Viking invasion of Britain.

The Priory begins by telling the story of the Anglo-Saxon Monastery, built 1,400 years ago, before the invasion of the Vikings and the significance that the island already had. The site museum showcases artefacts from early monastery life such as the Lindisfarne Gospel as well as depictions of the Viking raid. Notable collection items include the grave markers in both letters and runes as well as one, known as the Viking Domesday Stone, which shows several men brandishing weapons.

This is an important stop for anyone on a pilgrimage of Viking heritage sites and the picturesque location makes it a memorable day out.