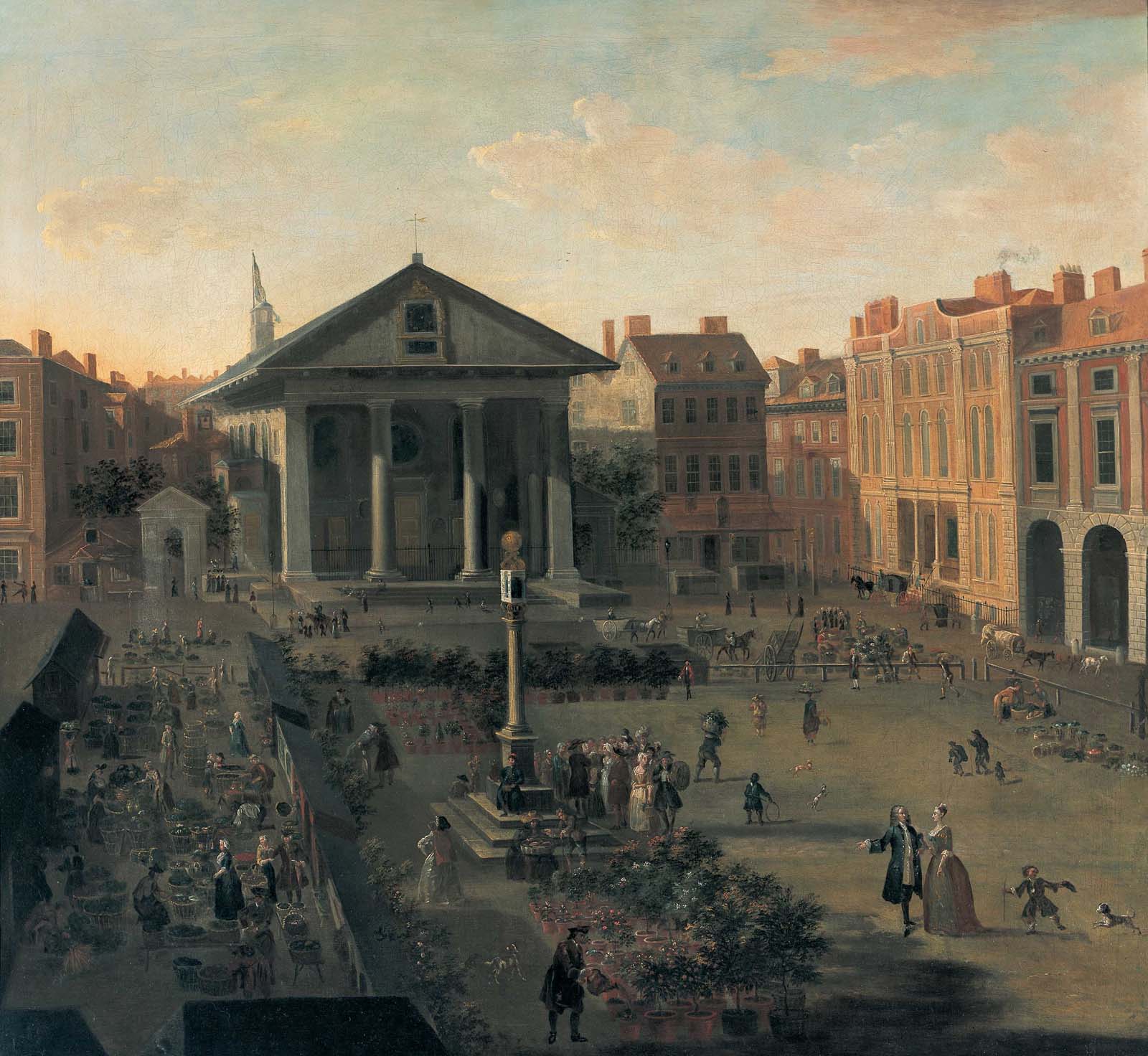 Libby Paterson, Exhibitions Manager, and Dr. Michael Bennett, Researcher at the Bank of England Museum on the beginnings of their work looking at Black Histories in the collection 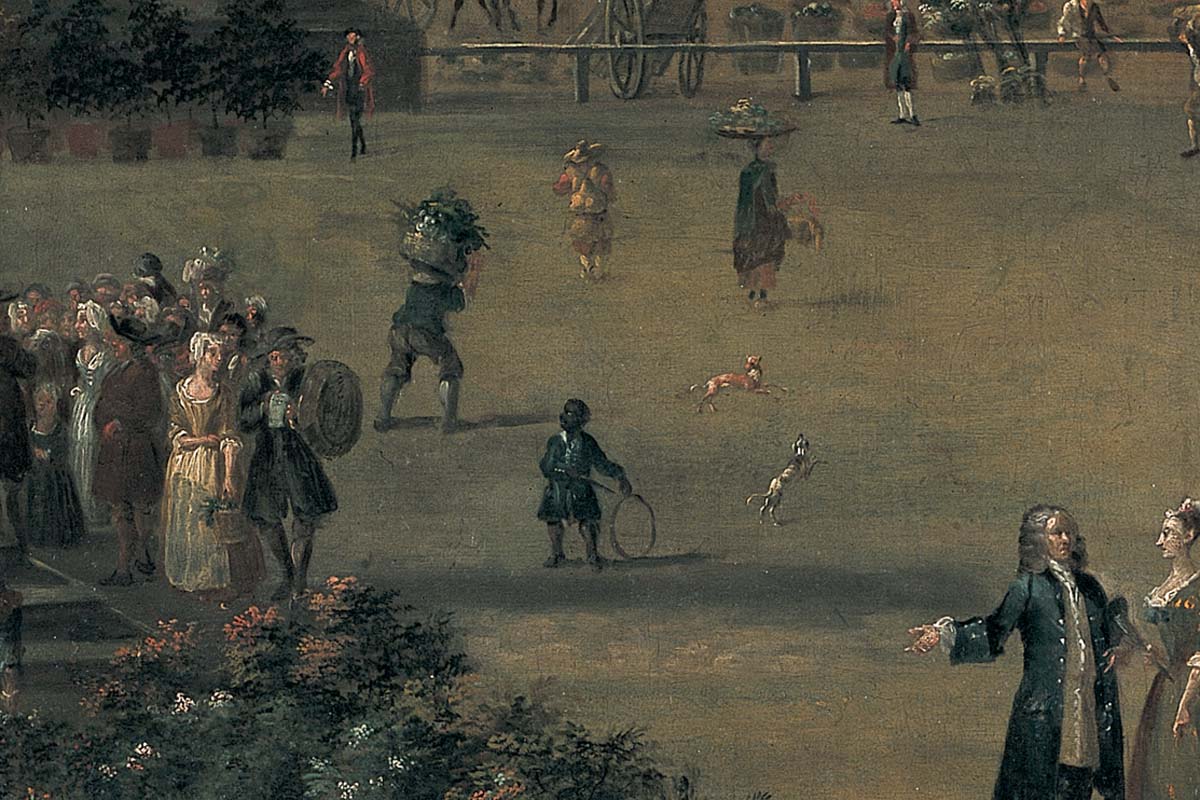 This painting of Covent Garden by the Dutch-born painter Jan Griffier I is part of our collection of oil paintings.

At the turn of the eighteenth century, Covent Garden was an outdoor market selling fruit, vegetables, flowers, and plants. Locally grown produce, along with goods imported from the Americas, Mediterranean, West Africa, and Asia would all have been sold here. The central square, designed by Inigo Jones in the 1630s, was lined by fashionable houses and St Paul’s Church.

Much like today, Covent Garden piazza was also a centre for street entertainment in the late seventeenth and early eighteenth centuries. For instance, the diarist Samuel Pepys marvelled at a marionette show performed by the Italian puppeteer Pietro Gimonde in May 1662.

If we take a closer look at Griffier’s painting, you can see an African or African-descended individual playing with a rolling hoop and stick in the central piazza of Covent Garden. Historians have demonstrated that there was a small but significant African and African-descended population in early modern England, likely numbering in the thousands.

Despite the persistence of transatlantic slavery, Black Britons increasingly became free citizens, often through acts of self-determination, such as running away from their enslavers. This painting of Covent Garden provides further evidence of a Black British presence in London dating back to the early eighteenth century. 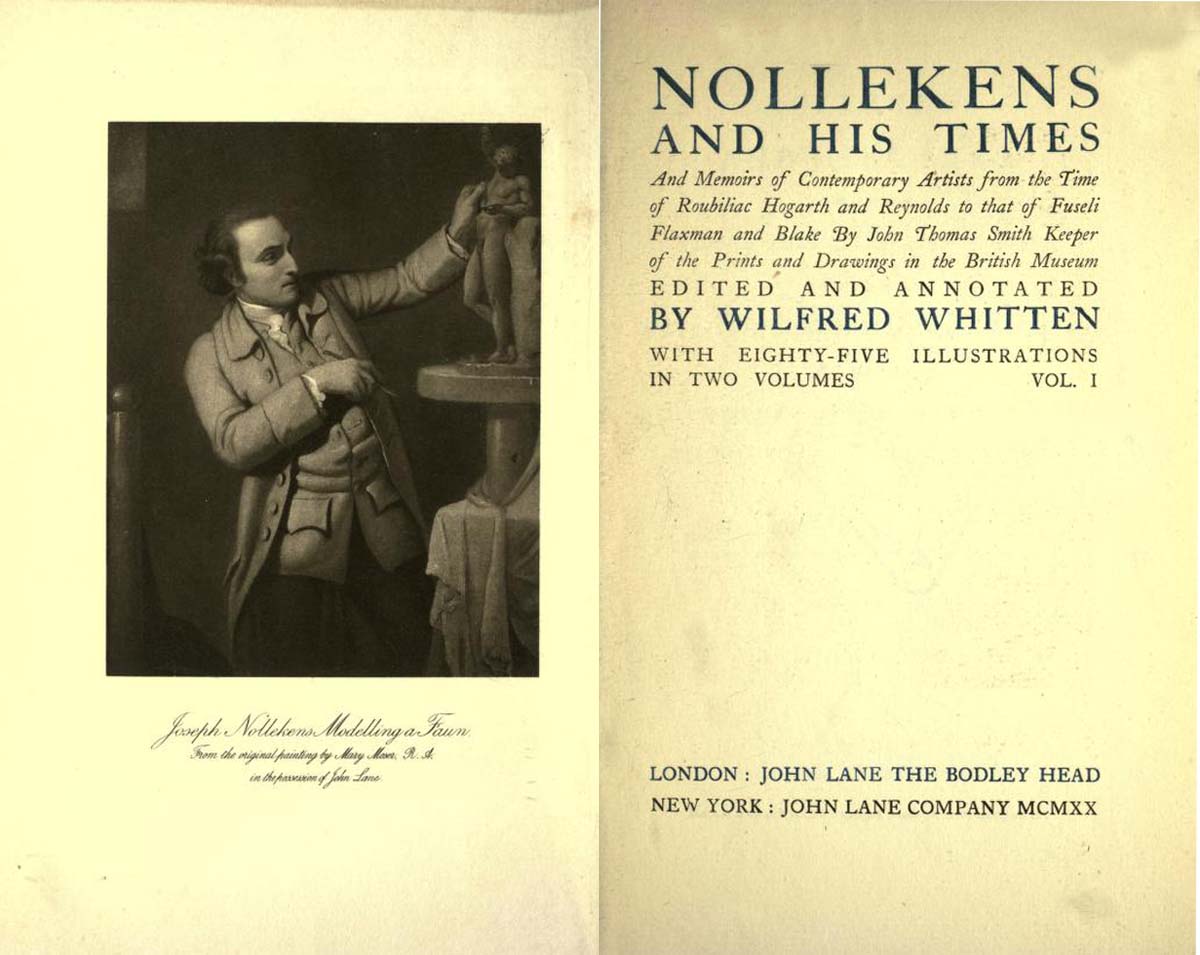 Nollekens and his time. An entertaining biography from the era of Hogarth and Blake contains some intriguing insights into the lives of eighteenth century Black Britons.

Our collection includes a number of busts by the sculptor, Joseph Nollekens. Nollekens is regarded as one of the best British sculptors of the late 18th century. What many people do not know is that Nollekens also offers a portal into eighteenth-century Black British history.

Elizabeth Rosina Clements, a Black maidservant, worked for Nollekens for many years and was well known amongst artistic circles, as well as with the shopkeepers of Oxford Market where she was a regular presence. When John Thomas Smith wrote a biography of Nollekens in 1828, he relied heavily on Elizabeth’s testimony.

The book became an important record of the late-eighteenth century art world. The warts-and-all account of Nollekens’ life gives a sense of Elizabeth’s playful yet astute character amidst the challenges she faced as a black woman in eighteenth-century London. 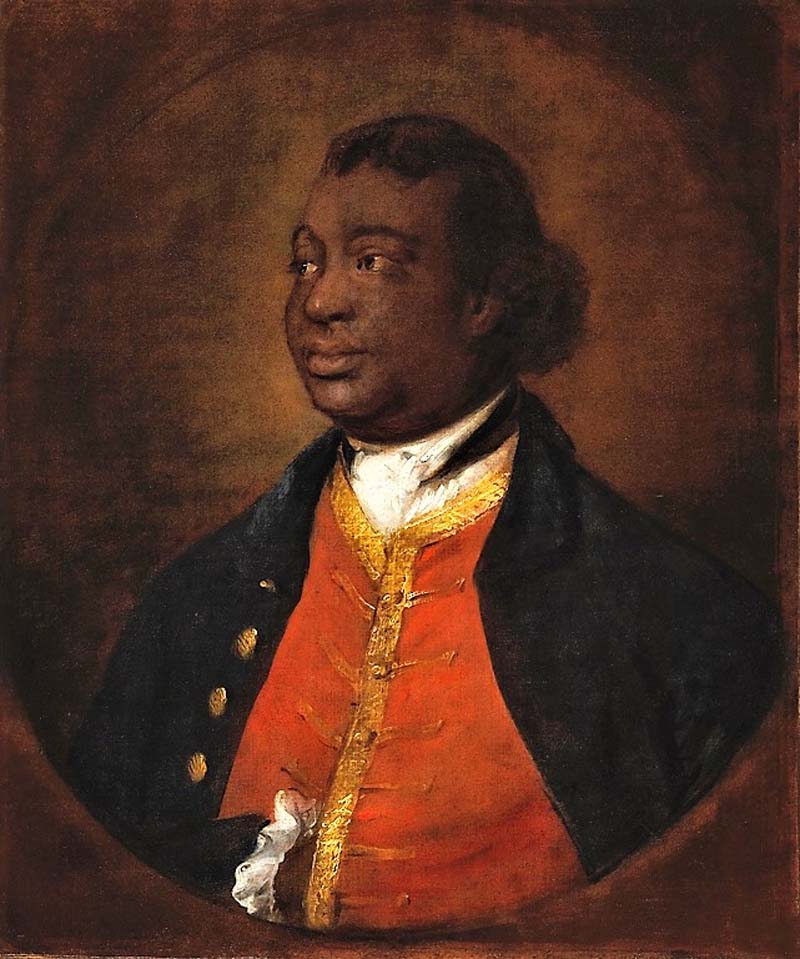 The biography also shows Nollekens’ friendship with Ignatius Sancho. Sancho was important figure in Black British history who was formerly enslaved and went on to become an acclaimed writer, and a key voice in the campaign to abolish the slave trade. As a male property-owner, Sancho had the right to vote. As such he was possibly the first Black Briton to vote in the UK, casting his ballot in the 1774 general election. 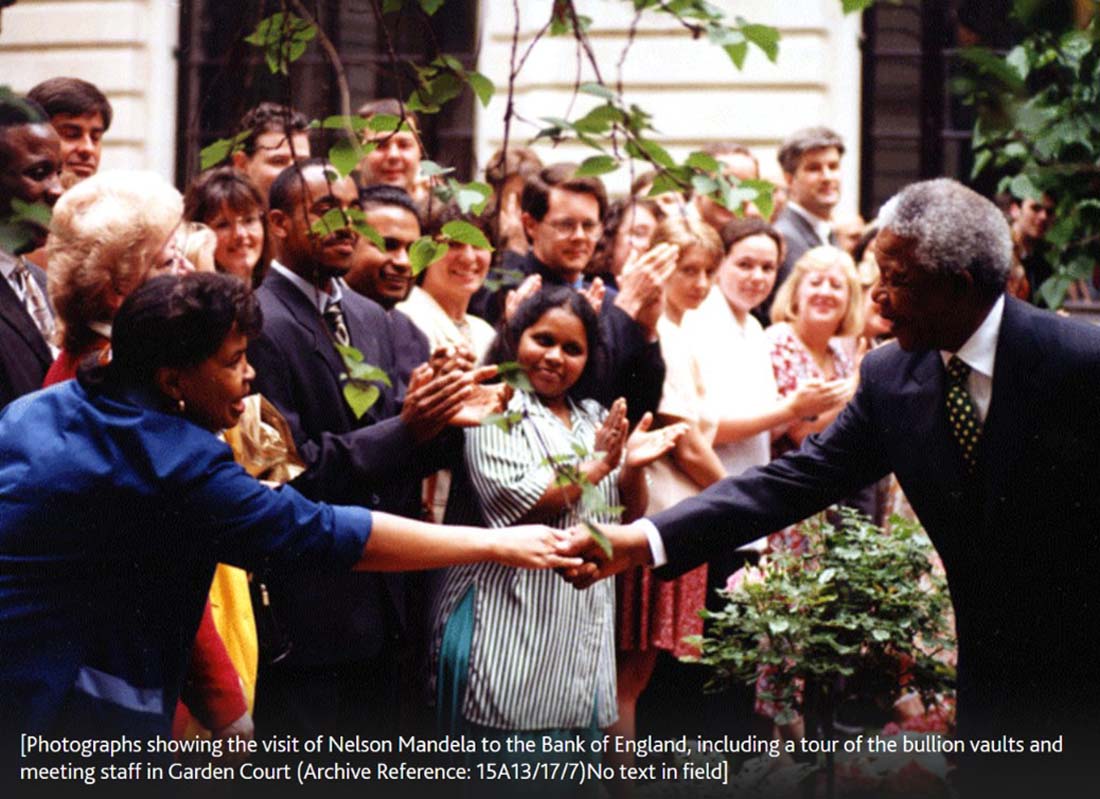 Mandela had joined the African National Congress (ANC) in 1944. From 1948 he was engaged in resistance against the ruling National Party’s apartheid policies, facing trial for treason as a result. Although Mandela was acquitted in 1961, the ANC had been banned in 1960 and so Mandela felt forced to resort to military tactics, forming a wing of the ANC to resist apartheid by any means called Umkhonto we Sizwe.

This led to Mandela’s arrest in 1962 and, although initially sentenced to five years, he was tried again as part of a wider group for plotting to overthrow the government by violence in 1963 where he was sentenced to life in prison.

Mandela’s statement at the 1963 trial gained international recognition for the anti-apartheid movement. Mandela became the most significant black leader in South Africa, and a symbol of resistance. When he was finally released in 1990, Mandela became president of the reinstated ANC in 1991. In 1994, he was elected as the first Black president of South Africa. Mandela continues to be remembered today for never compromising his political position, even when his personal freedom was at stake.

Mandela’s visit to the Bank of England, just six years after his release from prison and two years into his presidency of South Africa, marks a significant intersection between the Bank and Black revolutionary history that can serve as a potent reminder today.

As part of this work, it is planned that the Museum will reopen in the first half of 2022 with a public exhibition drawing on some of the findings of the research. The research will also enable other Museum content to be updated prior to reopening. The exhibition will, among other things, describe the role of former Governors and Directors who featured in portraits and busts that were removed from display in a private area of the Bank earlier this year. 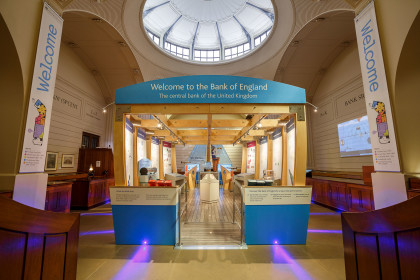 The Bank of England Museum tells the story of the Bank from its foundation in 1694 to its role in today's economy. Interactive programmes with graphics and video help explain its many and varied roles. Popular exhibits include a unique collection of banknotes and a genuine gold bar which may…