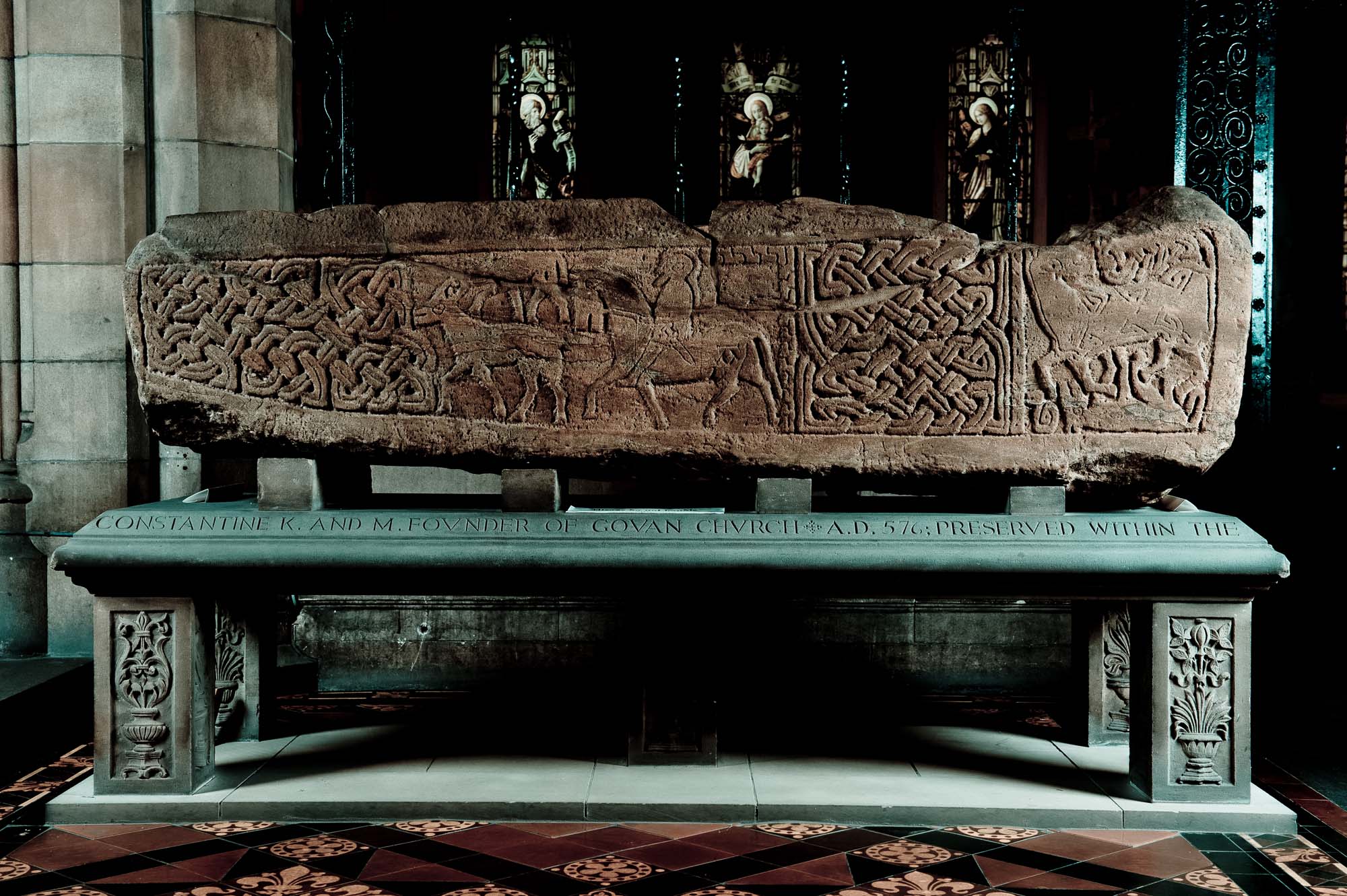 The stone sarcophagus of King Constantine I. © Govan Heritage Trust

Professor of Historical Archaeology at University of Glasgow, Stephen Driscoll, on the Govan Stones, a remarkable collection of early medieval sculpture on display in Govan Old Parish Church

All of the stones come from the churchyard of Govan Old and, as far as we know, the majority, which are the gravestones, were actually still in use until the modern period.

They were recycled from generation to generation and some of them actually have inscriptions, initials and dates, which shows they were still being used in the sixteenth to nineteenth centuries as gravestones for the local gentry.

But the main piece of sculpture, which is the sarcophagus, was found in 1855. It was discovered during grave digging full of soil, but with no bones or human remains inside.

It was a sensational discovery because it’s unique in Scotland and there is only one comparable example in Britain (Derbyshire). Because of its importance it was given prominence in the first comprehensive antiquarian corpus of Christian monuments; John Stuart’s 1856 Sculptured Stones of Scotland.

Following its discovery an enclosure to house it was built in the churchyard, but once the present church was completed in 1908 they actually brought the sarcophagus into the church where it would have originally been, more or less right in front of the altar – or in Scot’s terms, the Communion Table. 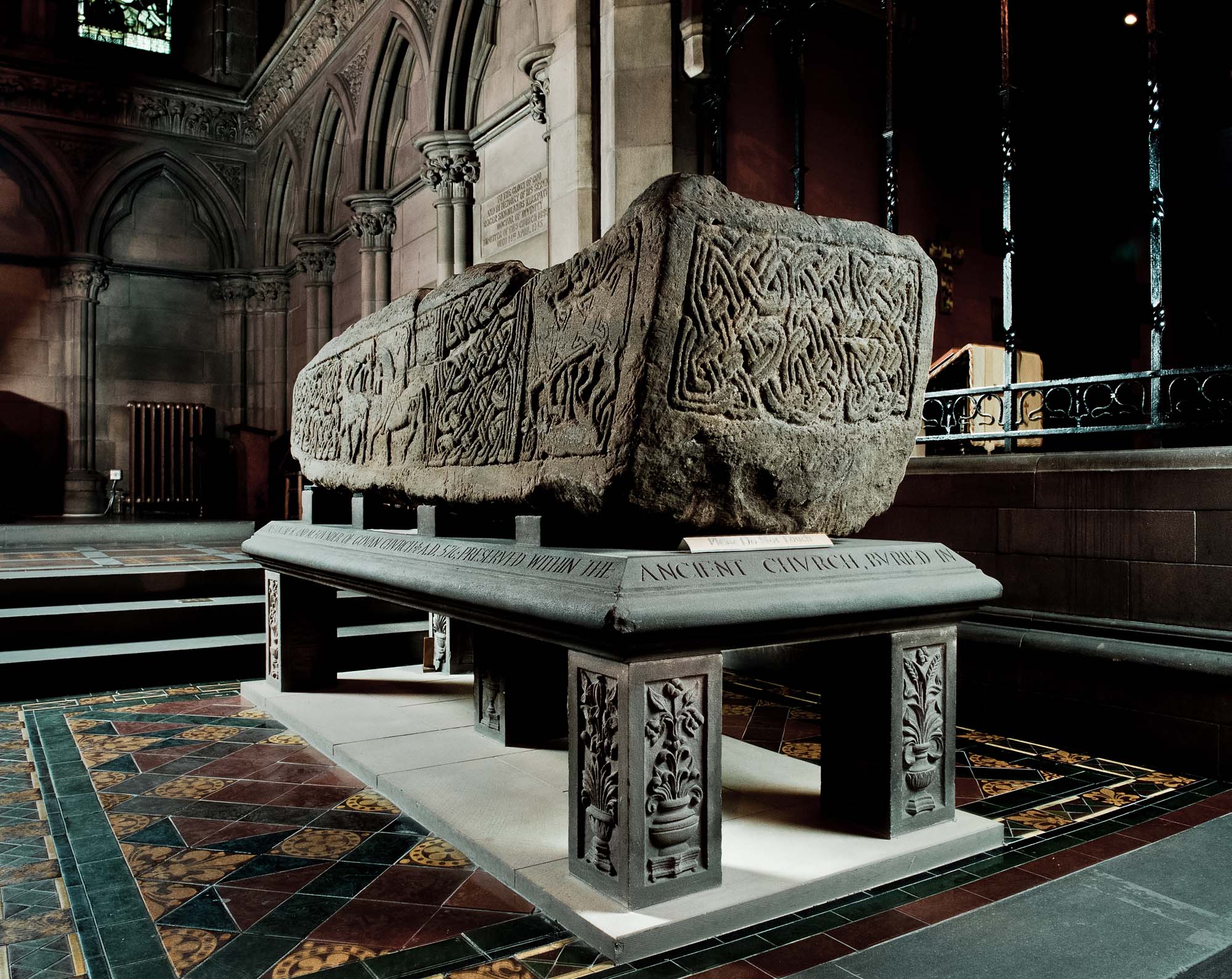 Another view of the stone sarcophagus of King Constantine. © Govan Heritage Trust 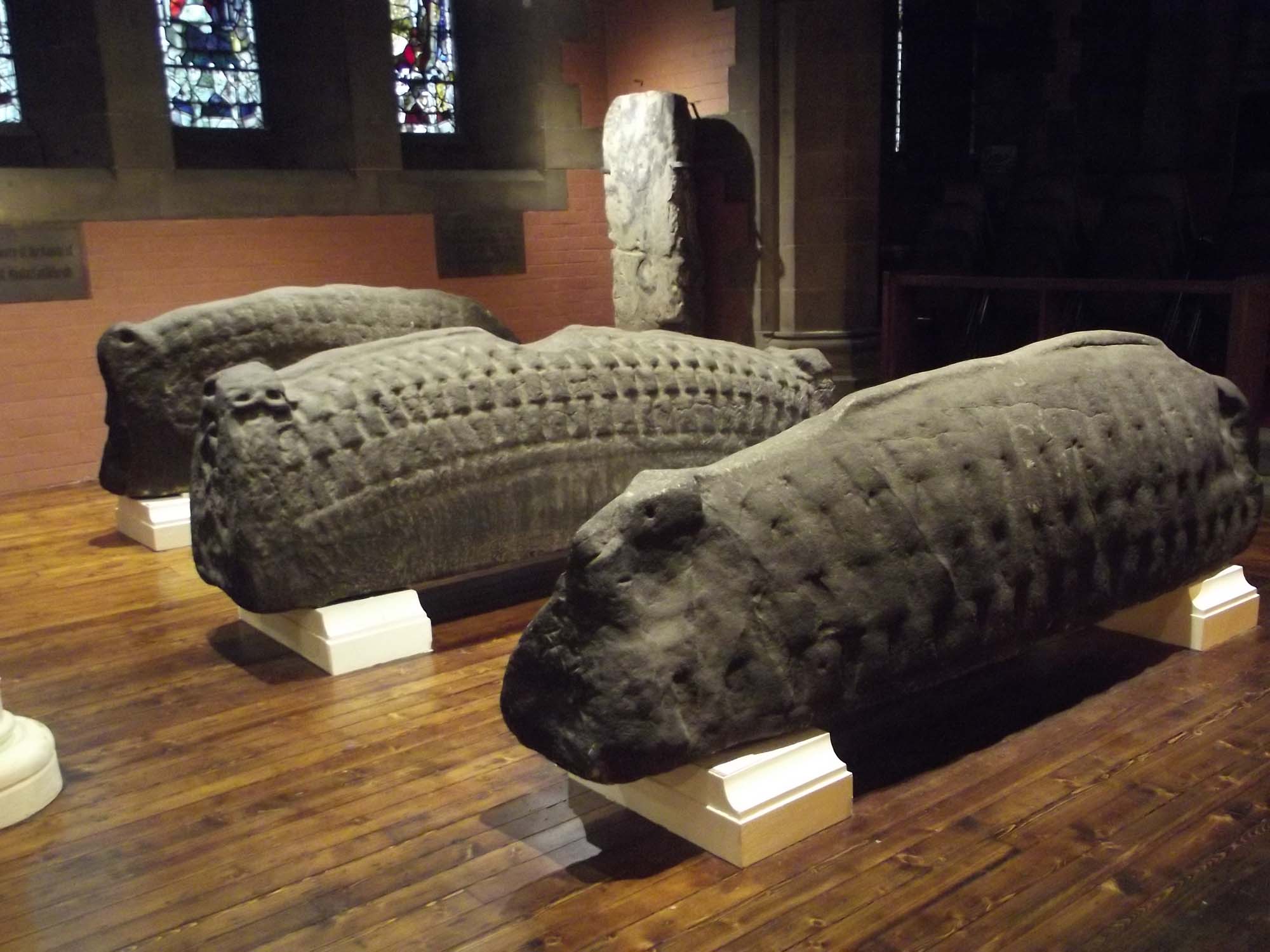 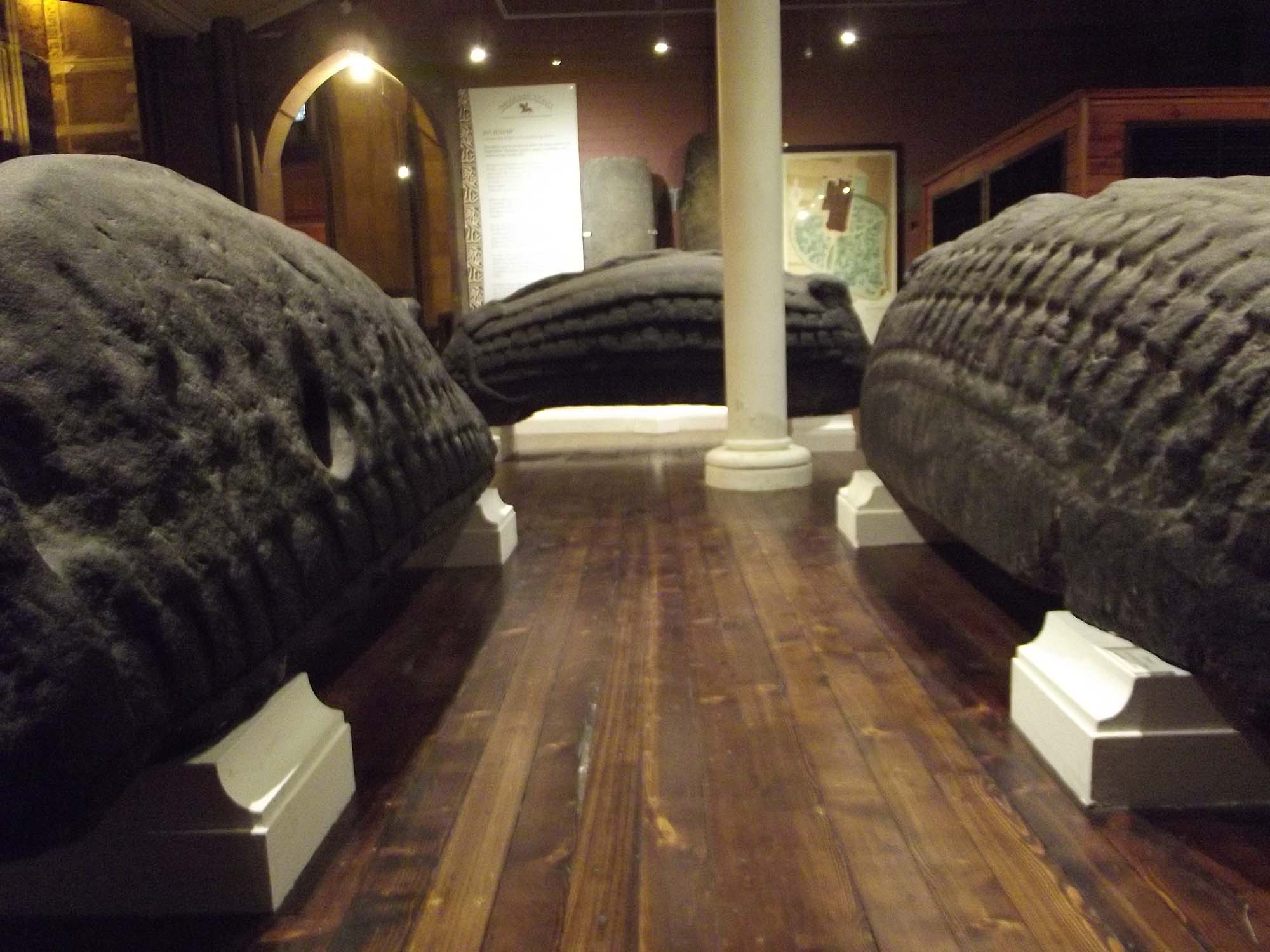 At this time the other stones were still outside being used, but during the 1920s they were gradually brought into the church where they were little-known outside the congregation. The most important move to make them more visible didn’t take place until the 1990s when the minister, Tom Davison Kelly, set up the Friends of Govan Old to make their great historical assets better known and more accessible. He’s the one that encouraged me to start excavating in the churchyard and got me involved the Govan Stones project.

The sarcophagus is monolithic; it’s made out of a block of local sandstone and is covered all over with Celtic ornament. We think it was a reliquary shrine that would have once held the bones of King Constantine I, not least because the dedication of the church is to Constantine, which is quite an unusual dedication in Scotland.

King Constantine I, known as ‘the martyr’, was killed in 876 fighting Vikings. His sister was married into the Strathclyde royal house and somehow the Britons of Strathclyde must have got their hands on his remains because he seems to have become a patron saint to the dynasty.

One of the really interesting things about the sarcophagus is its condition. Yes, it’s damaged but it’s not weathered. All the other stones, which have spent centuries outside, are pretty heavily worn but this is still very crisp because it has been inside a church until the Reformation. After the Reformation, Scotland did away with all the saints’ relics and there is some minor damage from it being dragged out of the church.

The decoration is a kind of abstract ornament, which is true of the majority of the decoration on all the sculpture, which features the interlaced patterns commonplace amongst Celtic art, particularly Christian Celtic art.

One strand of discussion is that this is a kind of contemplative, meditative kind of art that allows the observer to explore devotional thoughts. The other idea is that it’s protective in the sense that the netting and tangling forms a kind of protective barrier that keeps evil thoughts and beliefs at bay.

The main iconography on the sarcophagus features a mounted warrior in a hunting motif. He’s on his horse, he’s got a sword, there’s a deer and what looks like a hound.

It’s the kind of motif which is very common in early medieval art in Scotland, particularly amongst the Picts, and Constantine is actually the king of the Picts at the time of his death. So it looks like they’ve picked up on some motifs and represented the king as a kind of warrior in this very typical way. 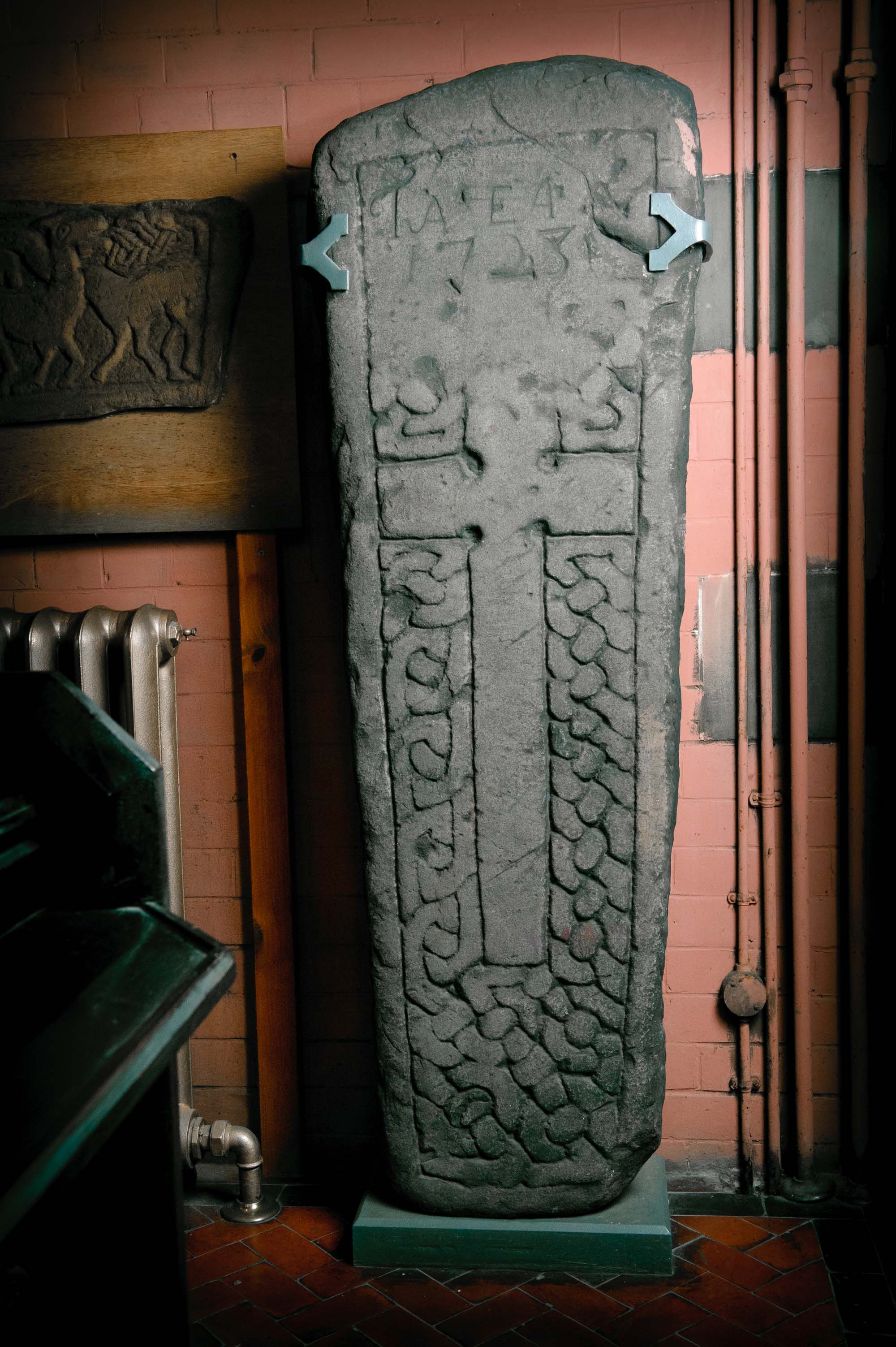 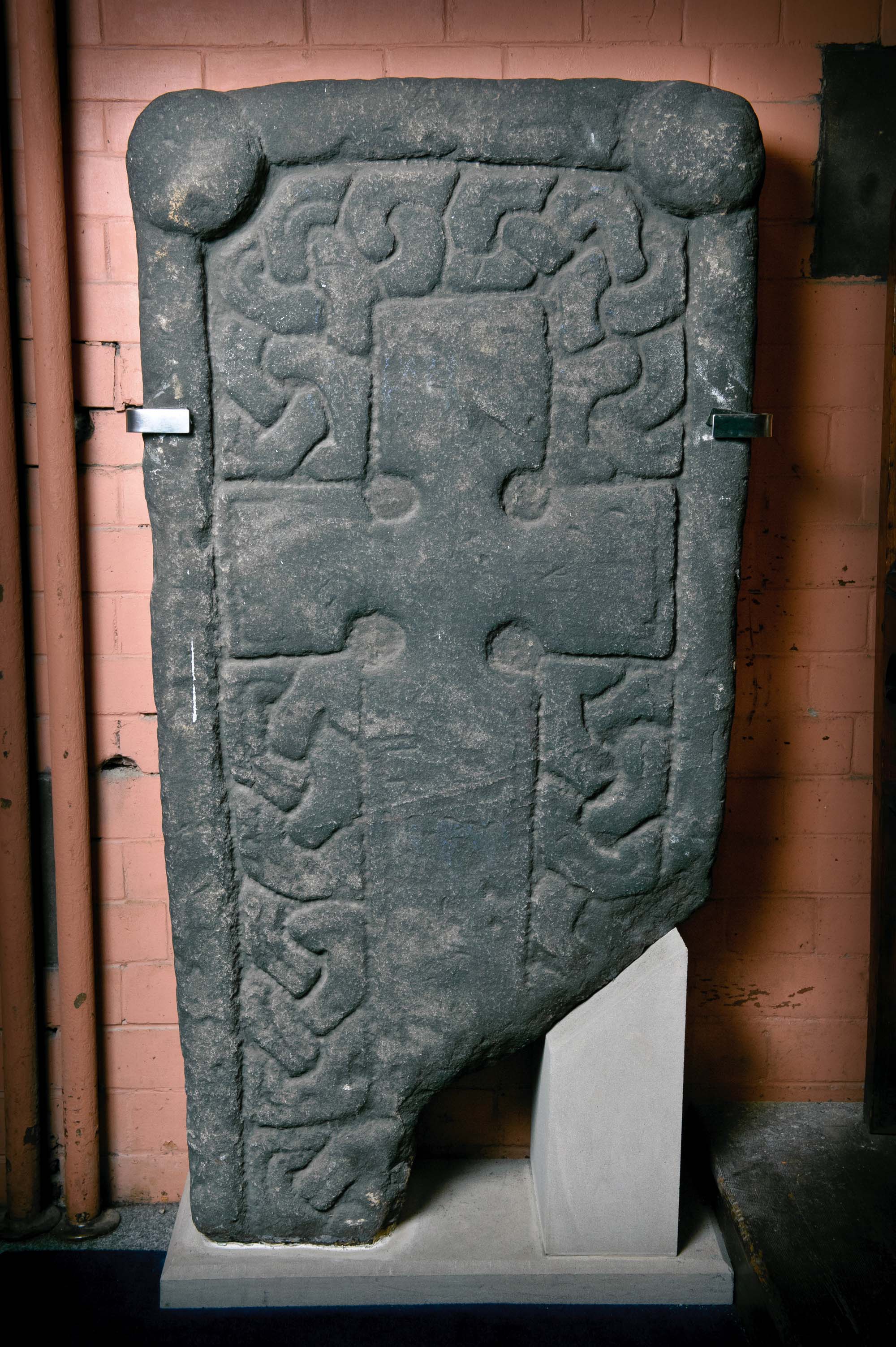 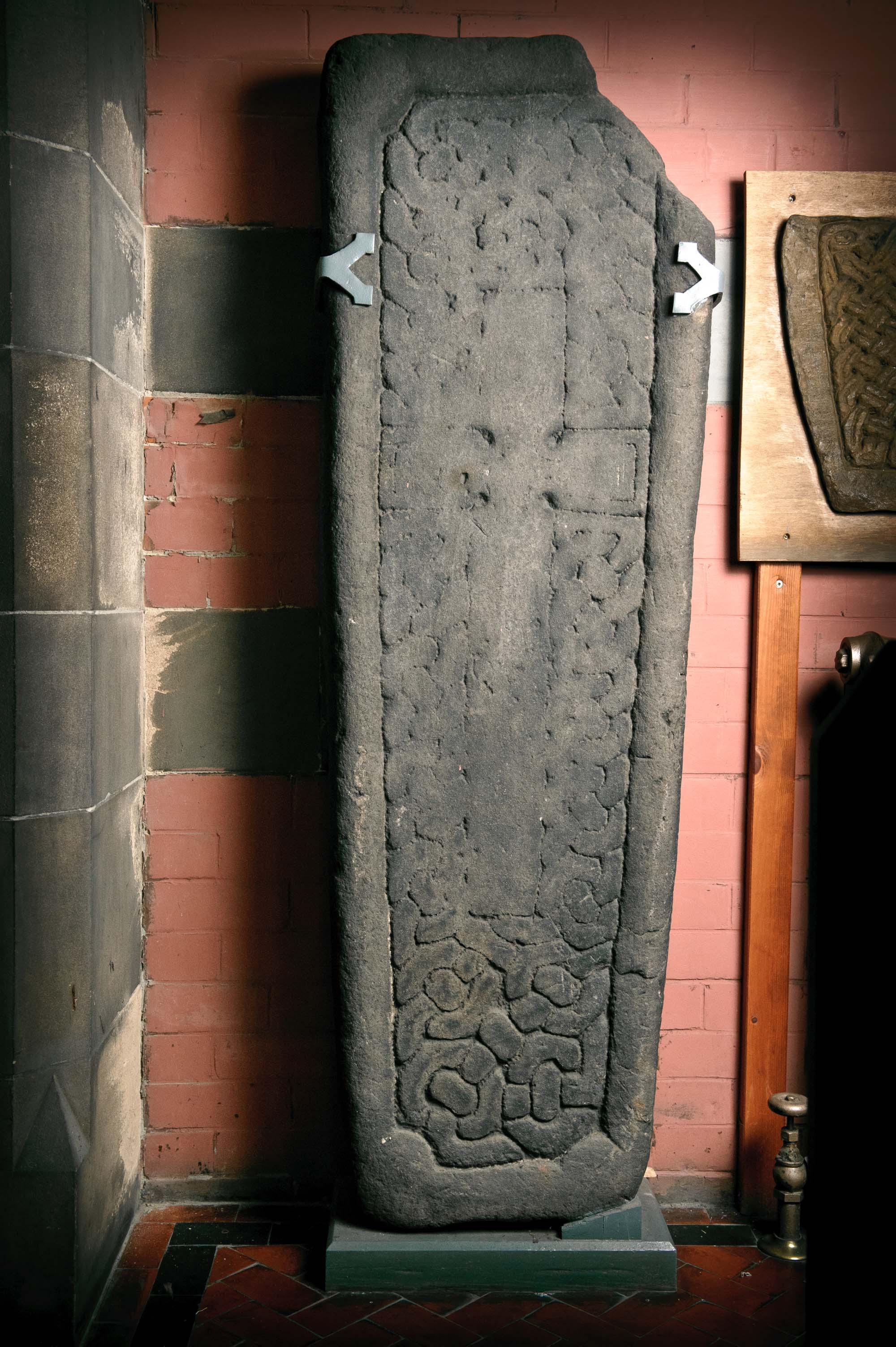 Most of the other monuments are gravestones; flat, recumbent stones with crosses on them, but five of them are a type of monument called Hogbacks.

These are really distinctive monuments which come into being in the latter part of the 9th century. We find them in Yorkshire, Cumbria and in the central parts of Scotland, but not in the far north.

The way the scholarship is going on now, and there’s quite a lot of work going on, is that this is actually a type of hybrid British and Norse monument reflecting new aristocratic groups who are trying to assert themselves by marrying into and displacing pre-existing political groups.

“These are the largest group of Hogbacks in Scotland – and by far the largest anywhere in Britain.”

Hogbacks are actually representations of buildings. There are clear roof tiles on them, presumably timber shingles, and four of them have distinctive bow-sided profiles with swelling sides and a gently arced roofline, like a Viking house or hall. They are called hogbacks because they superficially look like a boar in size and shape, but they’re not representations of animals.

When you look at them closely you see that they all have protective beasts carved at the ends, but there’s not much detail left so they look more dragon-like than anything else. These protective animals are something that you might expect to find as an ornament to a great hall, but the question remains; are we looking at a house of the dead? Or is it meant to be the representation of a chieftain’s hall? They could even be a representation of a church, because some of them look like reliquary shrine caskets with some of the ornamental detail certainly inspired by metal working.

All these possibilities are acceptable in the sense that some of the people buried in this churchyard would be members of the royal household. We cannot tell whether they were used by secular or clerical elites, but since we would expect the leading clerics to be closely related to the royal house, I do not see these things as being in conflict. The Govan Hogbacks are special because this is the largest group in Scotland and these are by far the largest anywhere in Britain. Some of them are about twice as big as some of the Yorkshire hogbacks making them big enough to cover a whole body.

The Hogbacks don’t have inscriptions but it looks like from where they were found in the graveyard that they were still being used to mark graves in post-medieval times, although how you would actually lift one of these things to get another body underneath is difficult to imagine. 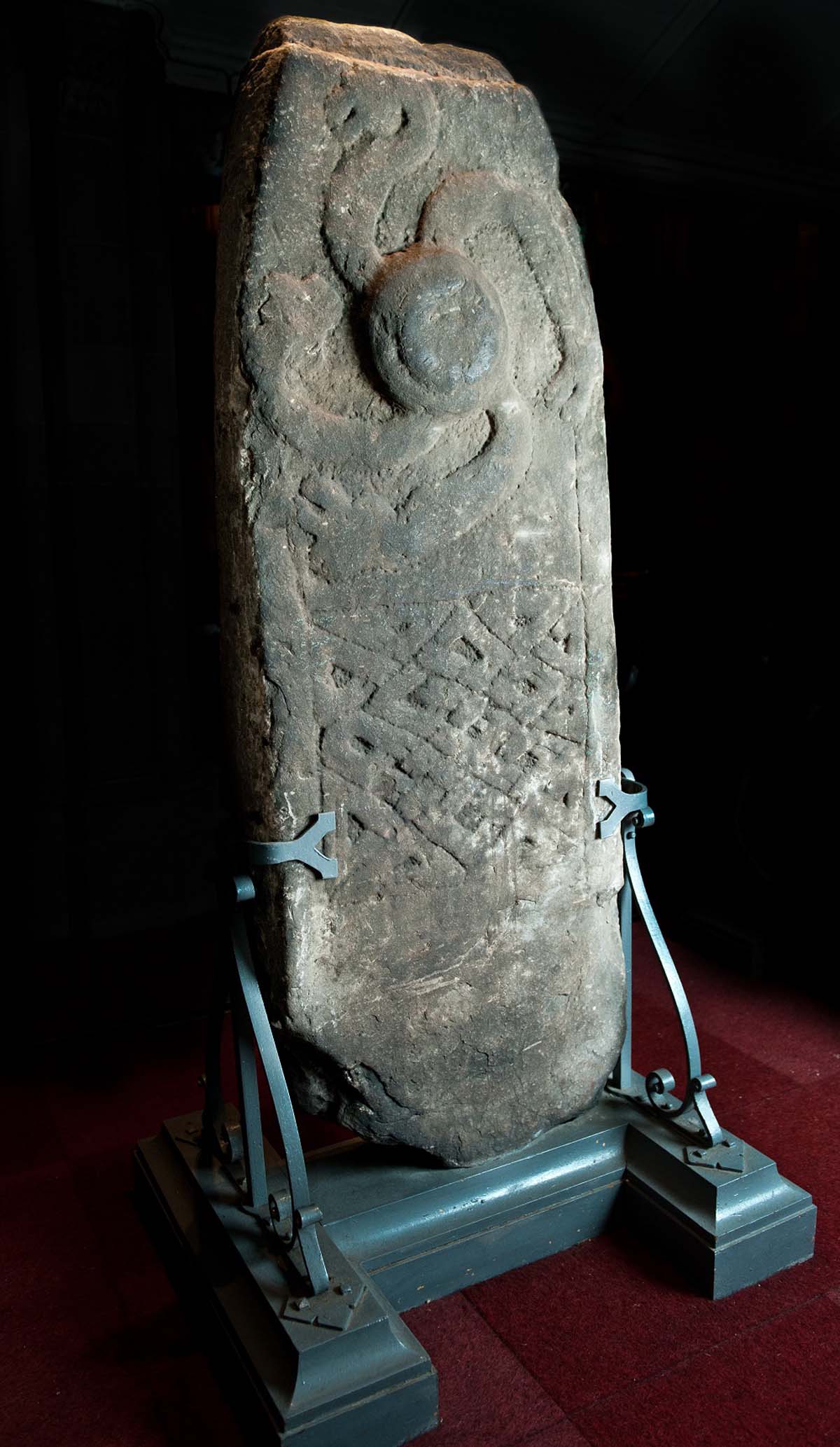 All the sculpture in Govan is local sandstone and the limited analysis that has been done indicates that all could easily have come from five or ten miles away or even closer. It’s the same stone which was being used to build Glasgow’s distinctive tenements into the nineteenth century.

The other recumbent gravestones, of which 31 are known, all have a common concept behind them, which is a big crucifix ornamented with interlace. Sometimes the crucifix is blank and the interlace is around it, sometimes it’s on the cross and sometimes it’s on both.

They’re about the size of a human – not quite two metres – so they would cover a body quite comfortably.

A current University of Glasgow/Glasgow School of Art research project is currently making 3D models of them with a view to analysing their sequence and tightening the chronology which is based on a rough and ready art historical reckoning. Our view is that the hogback stones are probably the earliest gravestones, maybe starting around AD 900 with some of them made after the year AD 1000 and we think the recumbent stones start to be made by the middle of the tenth century.

A new kingdom is born out of the post-Viking chaos

In terms of a church on the site I’ve got radiocarbon dates from burials sealed by a building (a church?) dating from 450 to 600. So there’s a burial ground (presumably with a church) here from the very beginnings of Christianity in the west of Scotland. I’m not saying it’s the first place, but it’s quite early on in the scheme of things and it’s an established place, long before the development of the sculpture.

But in terms of the political narrative, all of the sculpture dates from the period of the late ninth century to perhaps the very beginning of the twelfth century.

The late ninth century is the decisive point in the creation of the Kingdom of Strathclyde. In 870 the great British fortress and royal centre at Dumbarton was destroyed by the Vikings and within a generation or so we start to hear about a new kingdom called the Kingdom of Strathclyde. This kingdom seems to be born out of this post-Viking chaos and comes to dominate the south-west of Scotland until the twelfth century.

At that point the Kings of Scotland become very powerful, so they move in and take over, imposing a new diocese of Glasgow on the south-west of Scotland. They take the royal estates of Strathclyde and give them to the Bishop, who becomes a kind of ecclesiastical prince dominating most of southern Scotland. 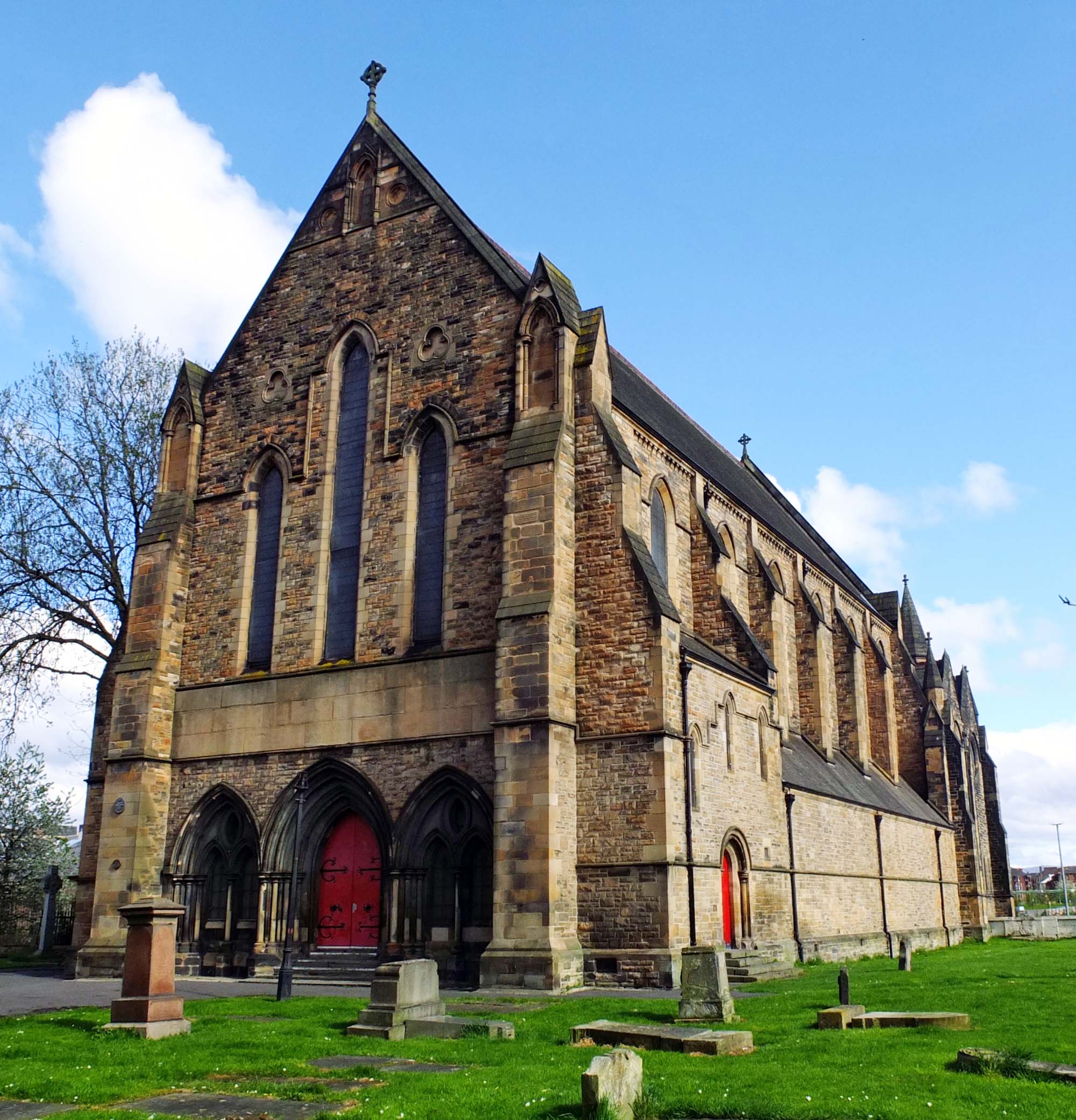 There be stones inside…. Govan Old Chuch © Govan Heritage Trust

And that’s the end of the King of Strathclyde and the end of Govan as a royal centre. Although its favourable situation and fertile lands ensure that it remains economically and politically important, from AD 1114 Glasgow Cathedral is the dominant authority in the region.

Today the Govan Heritage Trust has responsibility for the largest collection of early medieval sculpture in Scotland that’s not in state care, which I think makes this a very special visit.

The church opens for visitors between the April 1 and October 31, entry is free although donations are welcome. For more information see www.thegovanstones.org.uk

Visit the A-Listed Govan Old Church and discover the unique collection of early medieval stones carved in the 9th – 11th centuries to commemorate the power of those who ruled the Kingdom of Strathclyde. Explore the 31 monuments dating from this period which include beautifully carved crosses and cross shafts,…

5 comments on “Unlocking the medieval mystery of the Govan Stones”