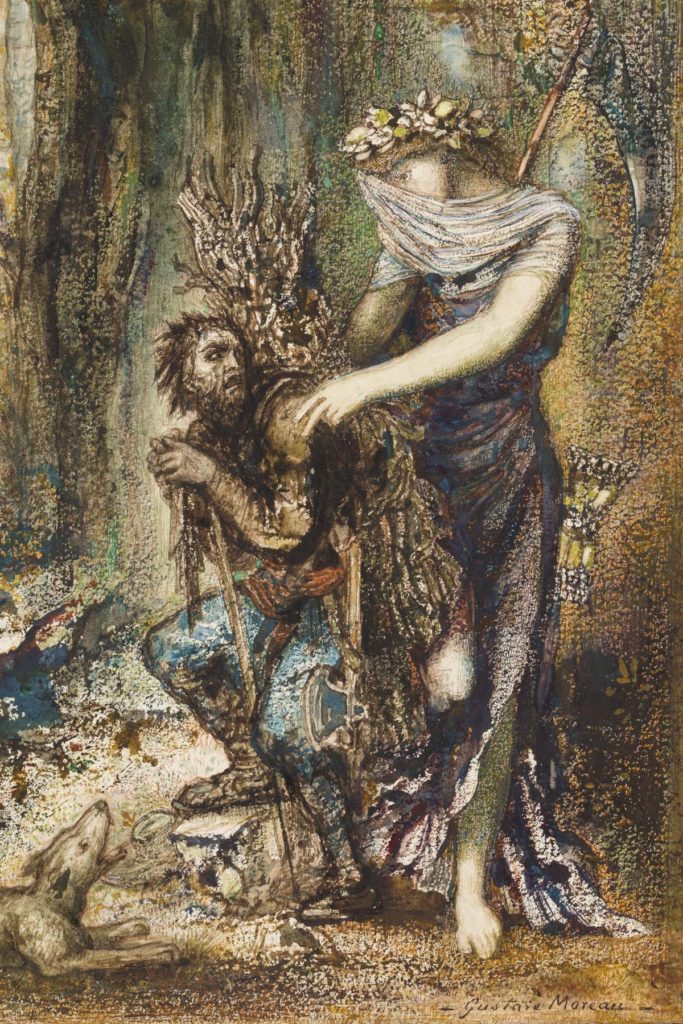 Unseen for over a century, these paintings show another side of the enigmatic Gustav Moreau in a rare appearance at Waddesdon Manor for summer 2021

Before attending the Ecole des Beaux Arts in Paris from 1846 to 1850 the young Gustave Moreau studied painting in Italy, and it’s the classical themes of Italian art – Greek myths and legends – that remained at the core of his art for much of the rest of his life.

Add to this a sense of mysticism, exoticism and a literary connection and it’s easy to see how Moreau is associated with the often difficult to separate symbolist and decadent movements in French art.

Effortlessly aesthetic and with a brilliantly honed sense of the symbolic – he was adopted as a kind of figurehead by the Symbolist poets, and even though he didn’t personally have the dandified degeneracy of the pre-eminent French poet of the era, Baudelaire, he is today widely regarded as one of the most brilliant, yet enigmatic artists of the French Symbolist movement.

Like Baudelaire, biographers point to a complex relationship with his mother, which may have influenced the depiction of the women in his paintings as inscrutable, powerful, sexual and sometimes treacherous, all of which seems to have made his art perfect fair for the more vaporous leanings of the later nineteenth century art world. 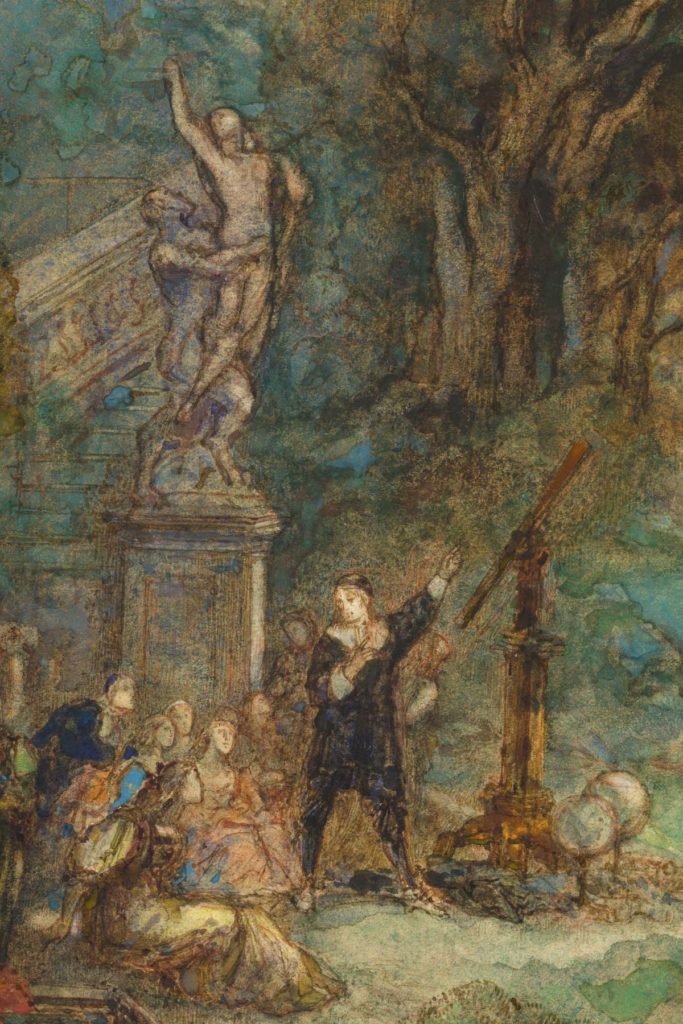 An animal in the moon (detail). Private collection. 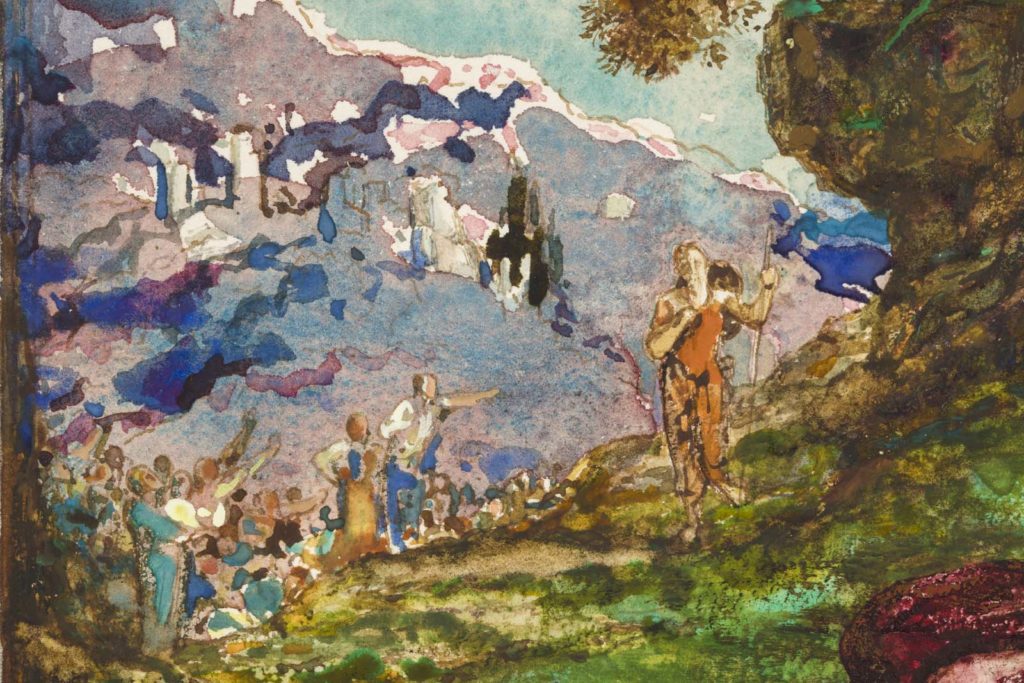 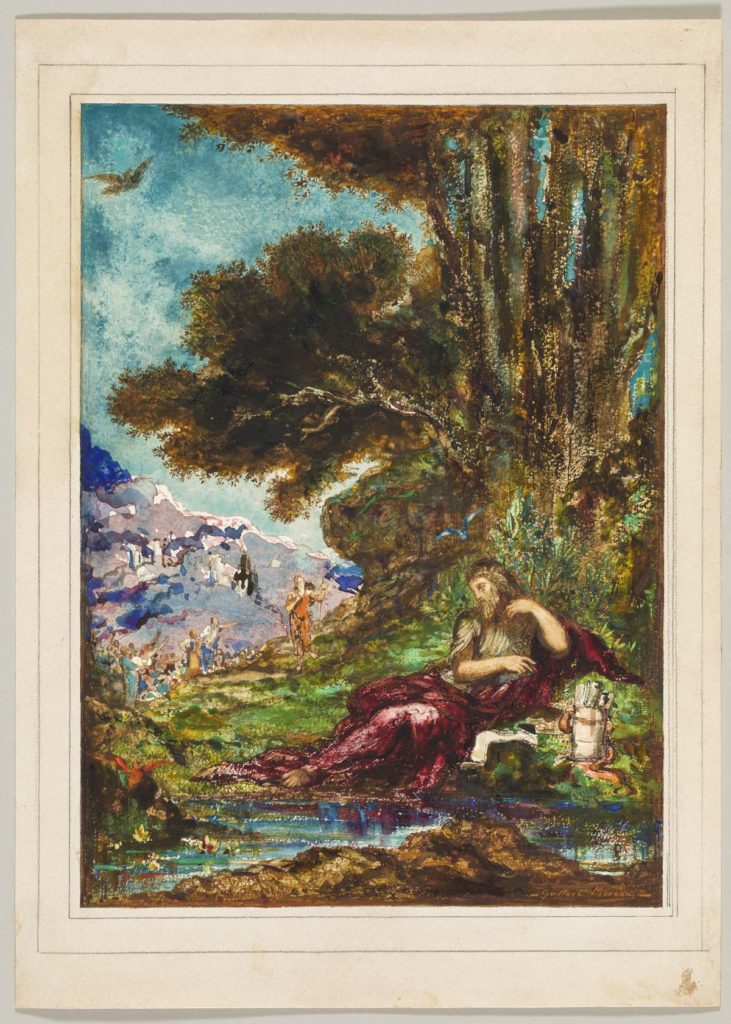 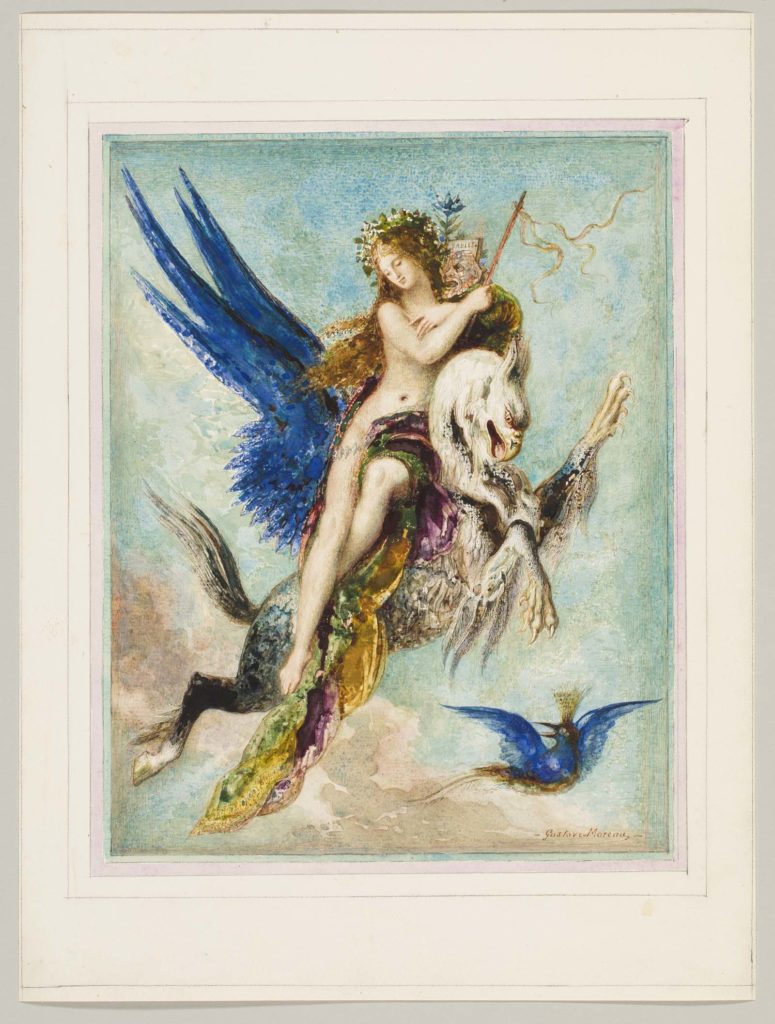 Yet he is still less well known in Britain than he deserves to be – especially given how his art’s supernatural and magical elements seem to offer a blend of Blake and the Pre-Raphaelites by way of the Impressionists.

But whereas the Pre-Raphaelites and their heirs transported Victorians back to a medieval world of idealised beauty, Moreau’s works offered a dream like timelessness – often with an underlying sense of horror.

He arrived on the Parisian artworld in 1864 when he showed Oedipus and the Sphinx at the Salon and, after an initial bumpy ride as Parisians accustomed themselves to his darker urges, his reputation grew thanks to paintings like the Apparition (1874 – 1876), which depicts the Biblical character Salome dancing before the floating head of John the Baptist, and is full of subconscious conflicts and themes of passion, love, eroticism and death.

This exhibition aims to re-awaken our passion for this master of symbolism and colour by cleverly expanding the typical Moreau subject matter, via a display of some of the most extraordinary works he ever made but which have not been seen by the public for over a century.

Moreau’s portfolio may be massive (he is reckoned to have produced thousands of canvasses) but it is these watercolours, which he produced to accompany the fables of La Fontaine, that are considered by many to be his most beautiful and which perfectly illustrate his masterful way of combining allegory and colour. 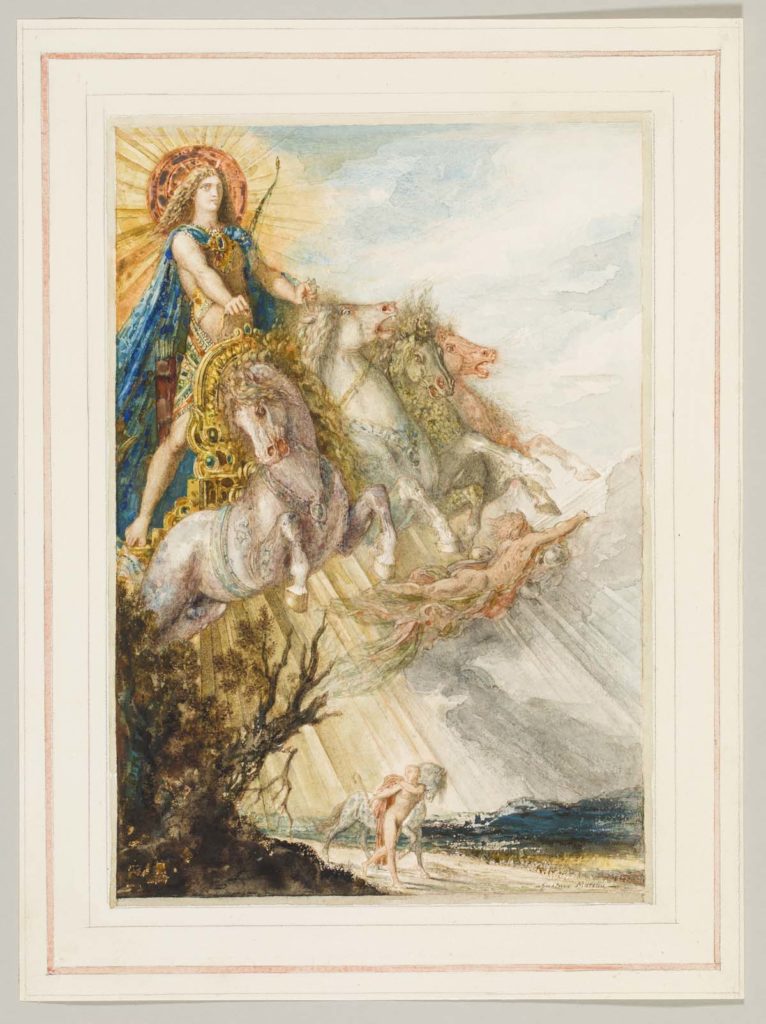 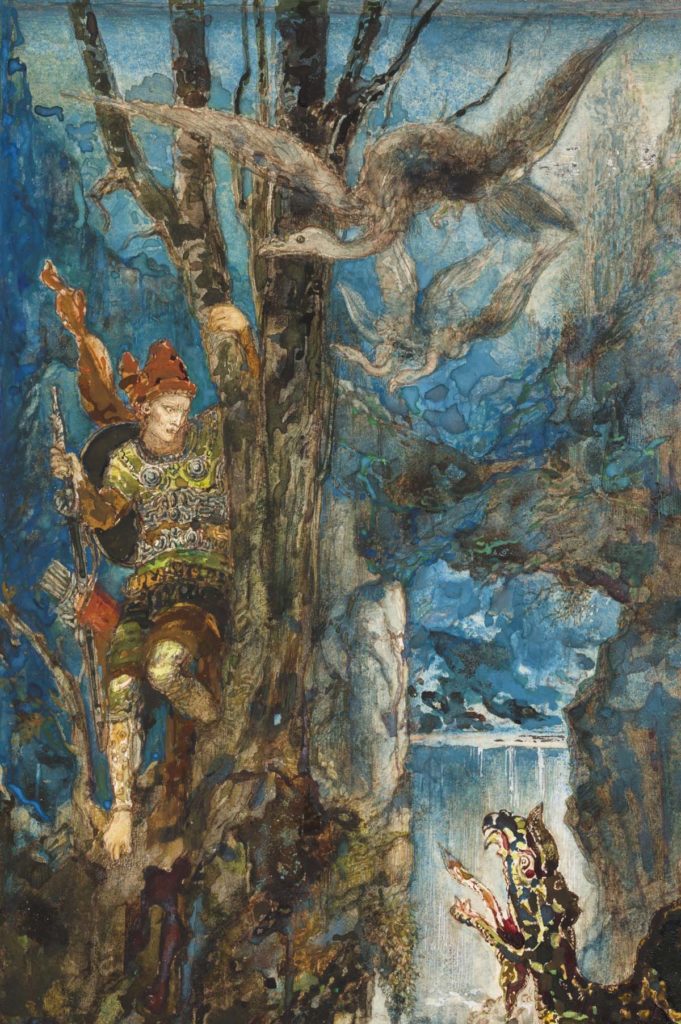 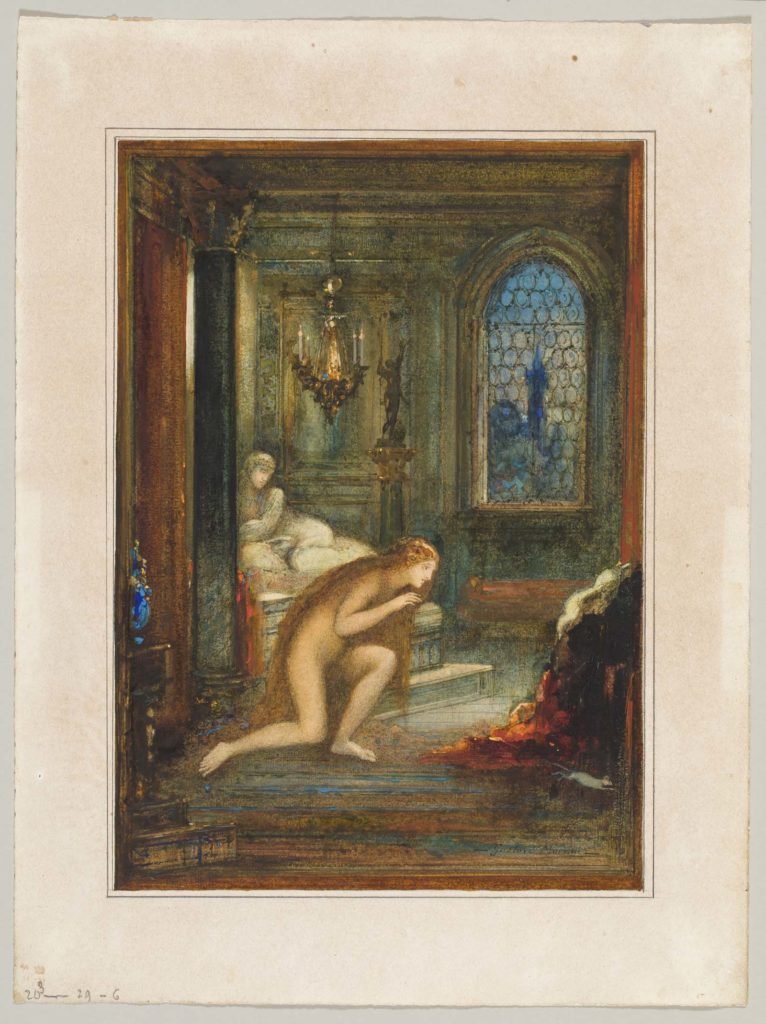 The cat transformed into a woman. Private collection. 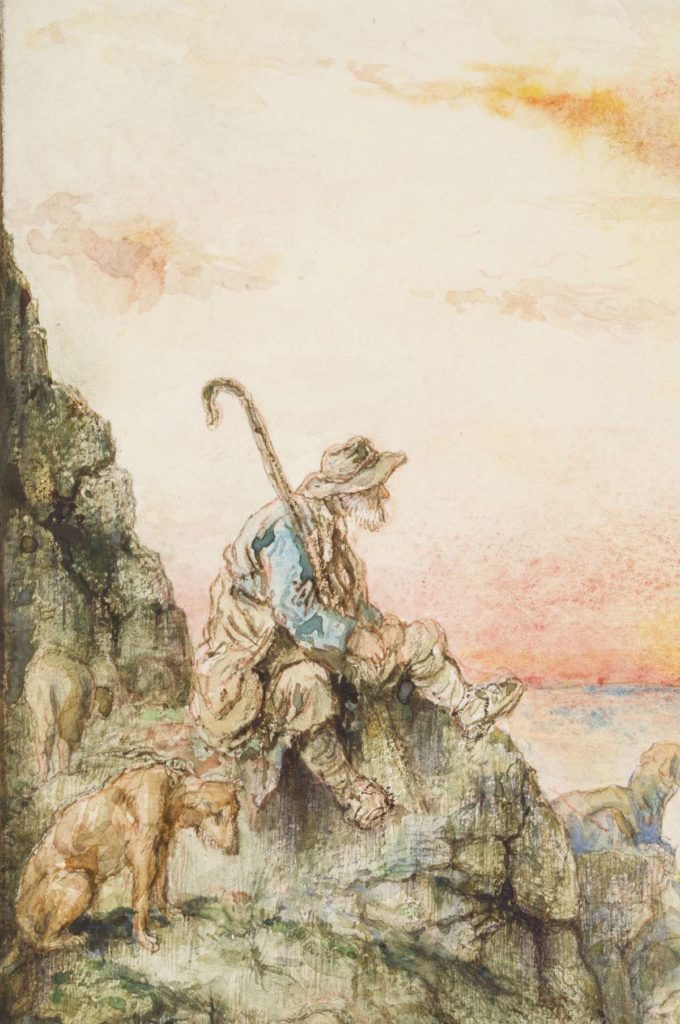 The shepherd and the sea (detail). Private collection.

In collaboration with Musée National Gustave Moreau, Paris, Waddesdon’s exhibition will reveal for the first time since 1906, 34 of these dreamlike watercolours, which were created by Moreau between 1879 and 1885, and are on loan from a private collection.

Part of a series, they were commissioned by the art collector Antony Roux, to illustrate La Fontaine’s 17th-century work (many of which derive from Aesop’s Fables).

Moreau made 64 works in total for the series, which subsequently entered a Rothschild collection; however, a significant proportion was lost during the Nazi era. The surviving works have not been publicly exhibited for 115 years and they have only ever been published in black and white.

Created at the height of the French 19th-century revival of watercolour, their variety of subject matter, technique and their colouristic effects, will be a revelation to visitors.

The Fables watercolours form the core of the display with additional loans from the Musée Gustave Moreau, where a version of this exhibition will open in February 2021.