Fancy dress takes a slightly awkward position within a costume collection. Dress can be exhibited to tell a multitude of stories but fancy dress is muddled, sometimes contradictory in its message; chosen to conceal rather than reveal identity, beyond the realms of status, era, fashion and, in many instances, taste.

Like costume for stage or screen, fancy dress generally has a number of condition issues working against its longevity. Made for showy effect rather than to withstand the test of time most (but not all) fancy dress costume is poorly constructed of hybrid, recycled materials for one-off use and, as a result, few examples remain in collections.

And so we are left with these isolated, incongruous objects. Rare but rarely shown because, for all their splendour, they were designed as a mask, to hide rather than reveal the wearer’s self.

The Scotney Queen of Hearts is one such enigma. The playing card dress was recently uncovered in the Scotney Castle costume collection, worn and accumulated by the Hussey family from the late eighteenth century until the house was left to the National Trust in 2006 (the garden was left to the Trust in the 1970s). 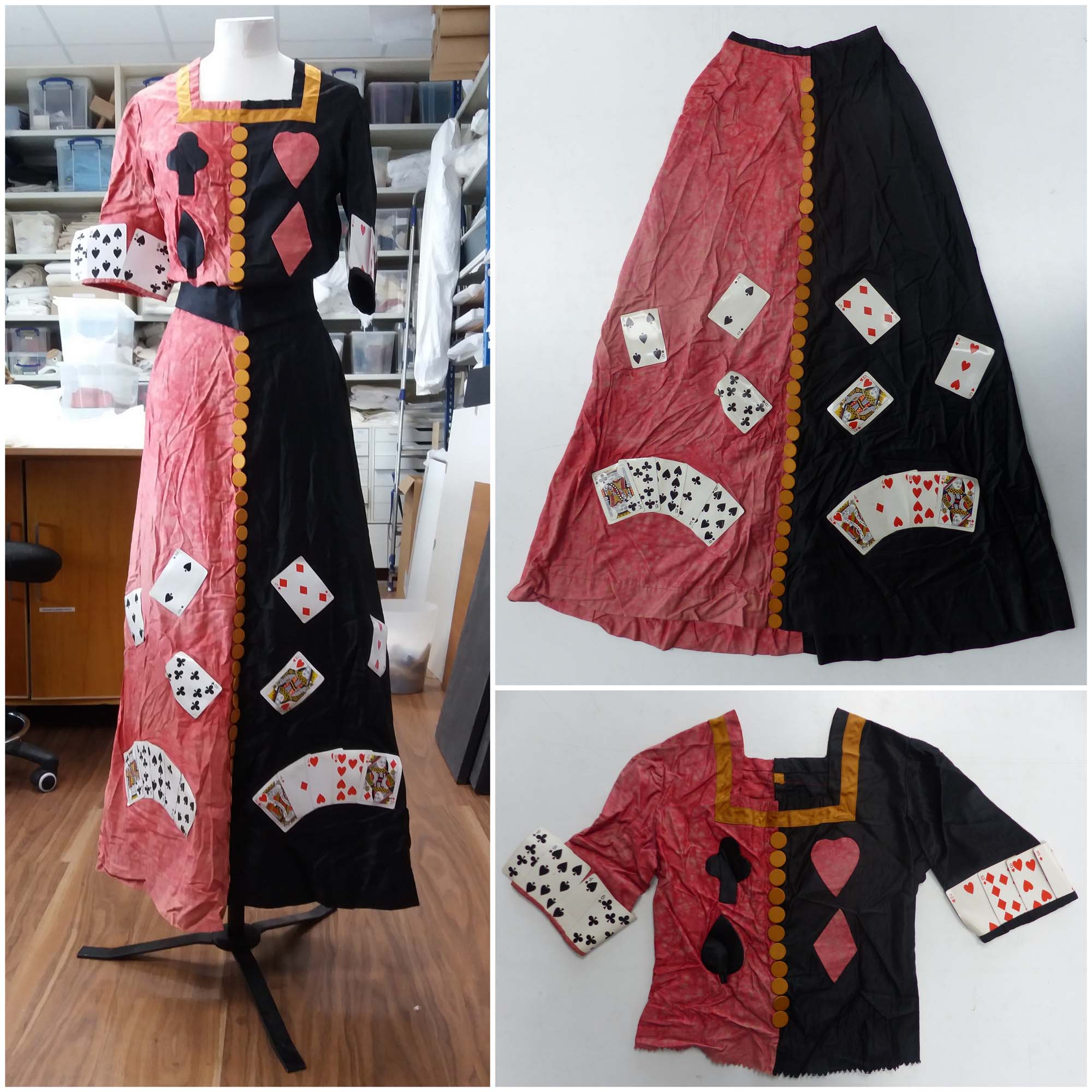 Like many collection store finds the garments’ accession predate accurate provenance documentation leading to speculation as to how this presumed early twentieth century set ended up in the archive.

Emma Long, the House Steward at Scotney notes that, “the costume was found in the attic in a box with a label ‘Fancy dress for village”. The bodice and skirt are rather small suggesting that the piece was made to be worn by a young adult, but Emma says that while there was a Victorian family at the Castle with the children being born between 1855 and 1865, “there have been no children at the property since then to correspond with the tentative dating of this garment”.

As a result, this costume has nestled, boxed in the store, clothed in mystery, until now.

For its winter exhibition ‘Inside the Collection’ Scotney Castle celebrates ten years of public access by delving into its own stores and the Queen of Hearts is finally taking to the stage. It came to the Zenzie Tinker Conservation studio in Brighton in August for treatment and mounting on a custom-made support.

The costume is unusual in that it comes complete with a full suite of accessories, including belt, crown, string of cards and hair nets, not to mention a set of luminous red silk stockings plus off-cuts of fabric. The skirt and bodice are embellished with playing cards, roughly stitched and adhered to the textile. Composite objects like this are particularly difficult to treat so paper and textile conservators worked together on the treatment of the playing card dress to ensure that neither card nor fabric was compromised. 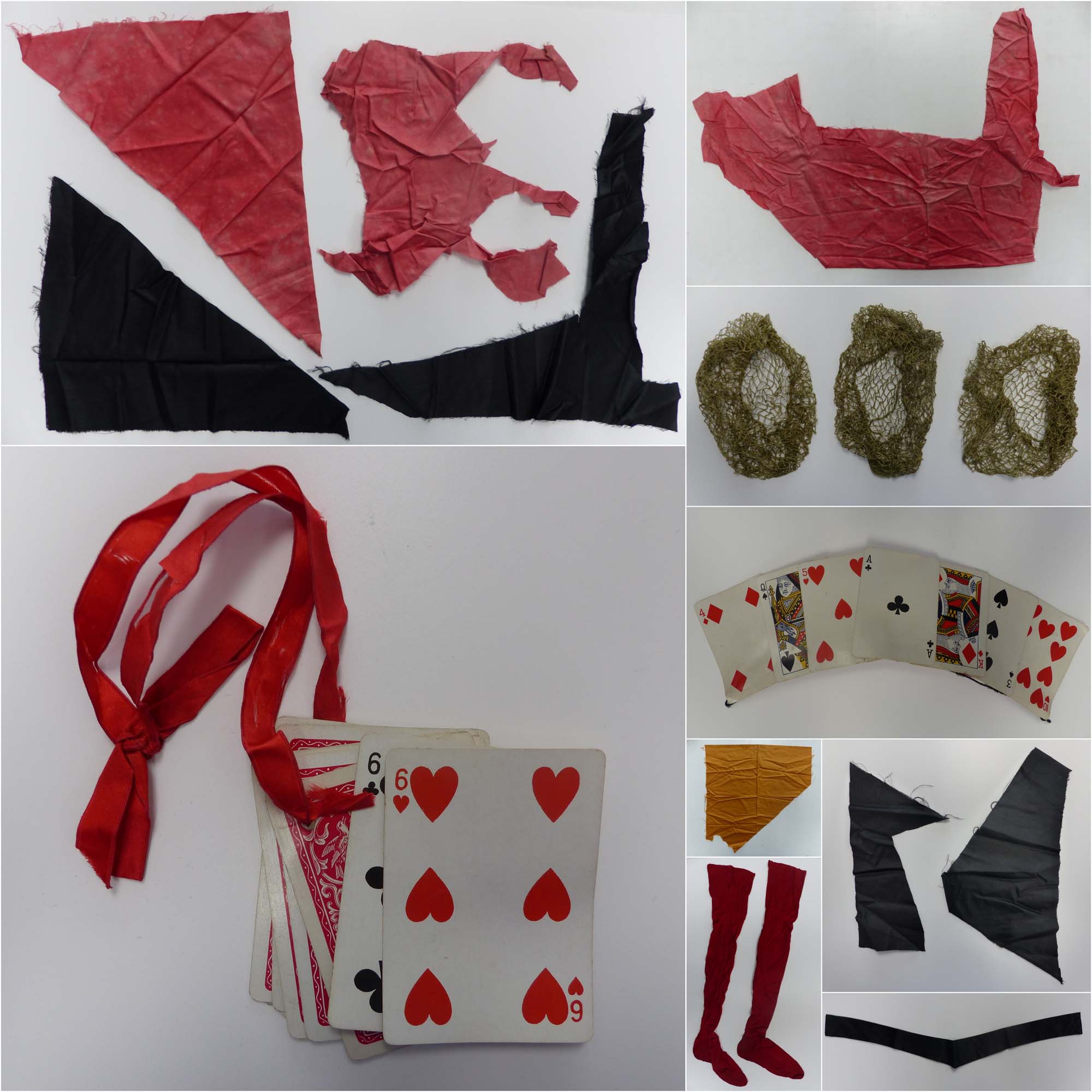 As well as the laminated playing cards the costume included metal hooks and eyes, stiffening wires, wooden buttons and some sort of buckram or stiffening fabric in the card motifs appliquéd to the bodice. The costume was in poor condition on arrival with evidence of pest activity, mottling to the fabric (likely due to damp storage conditions in the past) and severe creasing to both the cards and the textile. The adhesive holding the playing cards to the skirt had set the cards into solid, distorted shapes causing the costume to hang unevenly.

Camilla Close-Brooks, a textile conservator also trained in paper conservation, undertook the majority of the treatment while I focussed on the conservation mounting. Playing cards were reshaped using humidification techniques to introduce localised moisture, soften the adhesive and allow reshaping to take place.

The playing cards to the sleeves were held in place with stitching, making them less complicated, however one of the cards split almost in half and as mounting was underway simultaneously, the calico and polyester wadding arm supports fabricated for display were the logical solution for reshaping the cards to the sleeve cuffs around, setting them on a curve.

Treatment of the creased textiles required the application of a small amount of controlled heat in combination with a lightly dampened cloth to remove the tenacious crumpling. The damaged playing card was removed and repaired with Japanese tissue paper, Melinex® and an inert conservation adhesive. 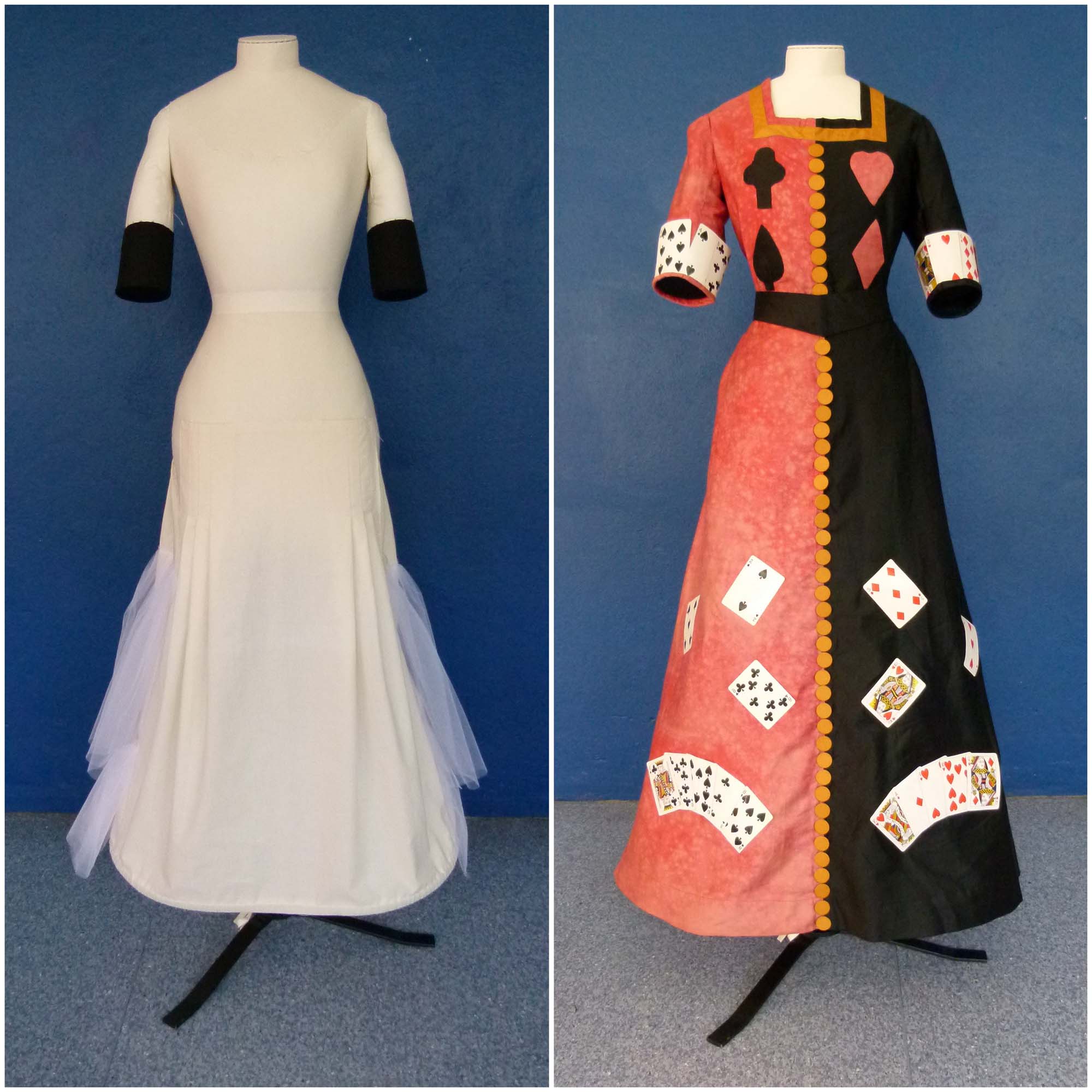 A stockman style mannequin was adapted to fit the costume; the torso was padded with polyester wadding covered in cotton jersey to create the sloping shoulders and slight S shape dictated by the Edwardian cut of the costume while the skirt was supported on a full underskirt of cotton calico and nylon net with a Rigiline® (polyester boning) hoop along the lower hem.

After a little deliberation it was decided to add a head onto the existing body of the mannequin so that the playing card crown could be displayed with the dress. A polystyrene head was cut down, sculpted and stitched into a matching cotton calico cover.

Costume and mannequin were returned to Scotney Castle for dressing where the garment is now on display in the dining room. There is no denying that the use of unconventional materials in the playing card costume, combined with its rough construction, complicated its conservation and mounting.

Such garments may have a frivolous facade but come with a complicated history of carefully concealed messages to tackle; difficult to gather, hard to research and certainly tricky to display. Fancy dress is, by its very nature, complex to read, and therefore translate. 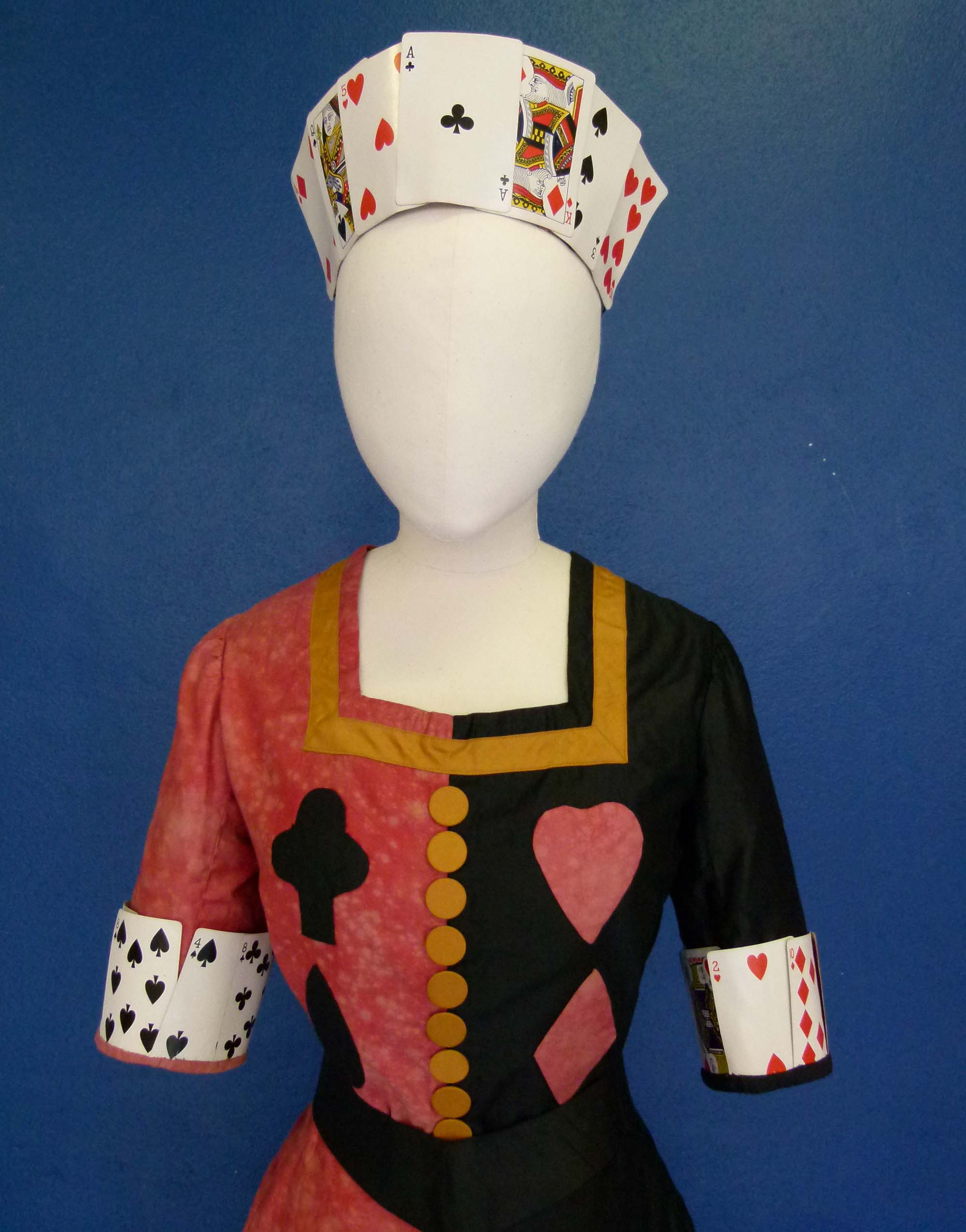 The space between what we can tell from looking at the object and the life of the person that wore it is vast and curators are understandably wary about presenting speculation in the absence of biographical data. However, the Scotney Queen of Hearts is testament to the fact that despite (or perhaps because of) its lack of associated material and odd allegiance with the rest of the collection, fancy dress has the unnerving power to transport us back and inspire the imagination like no other.

You can see the Playing Cards Fancy dress costume alongside other treasures in the Inside the Collection at Scotney Castle exhibition.

Find out more about the work of Zenzie Tinker Conservation at www.zenzietinker.co.uk

The moated 14th century castle and landscape of Scotney together make this one of England's most romantic places. Created in the 1830s by Edward Hussey who had the imagination to transform the medieval Scotney Castle from derelict dwelling to quaint ruin, thus forming the focus of his picturesque landscape garden,…