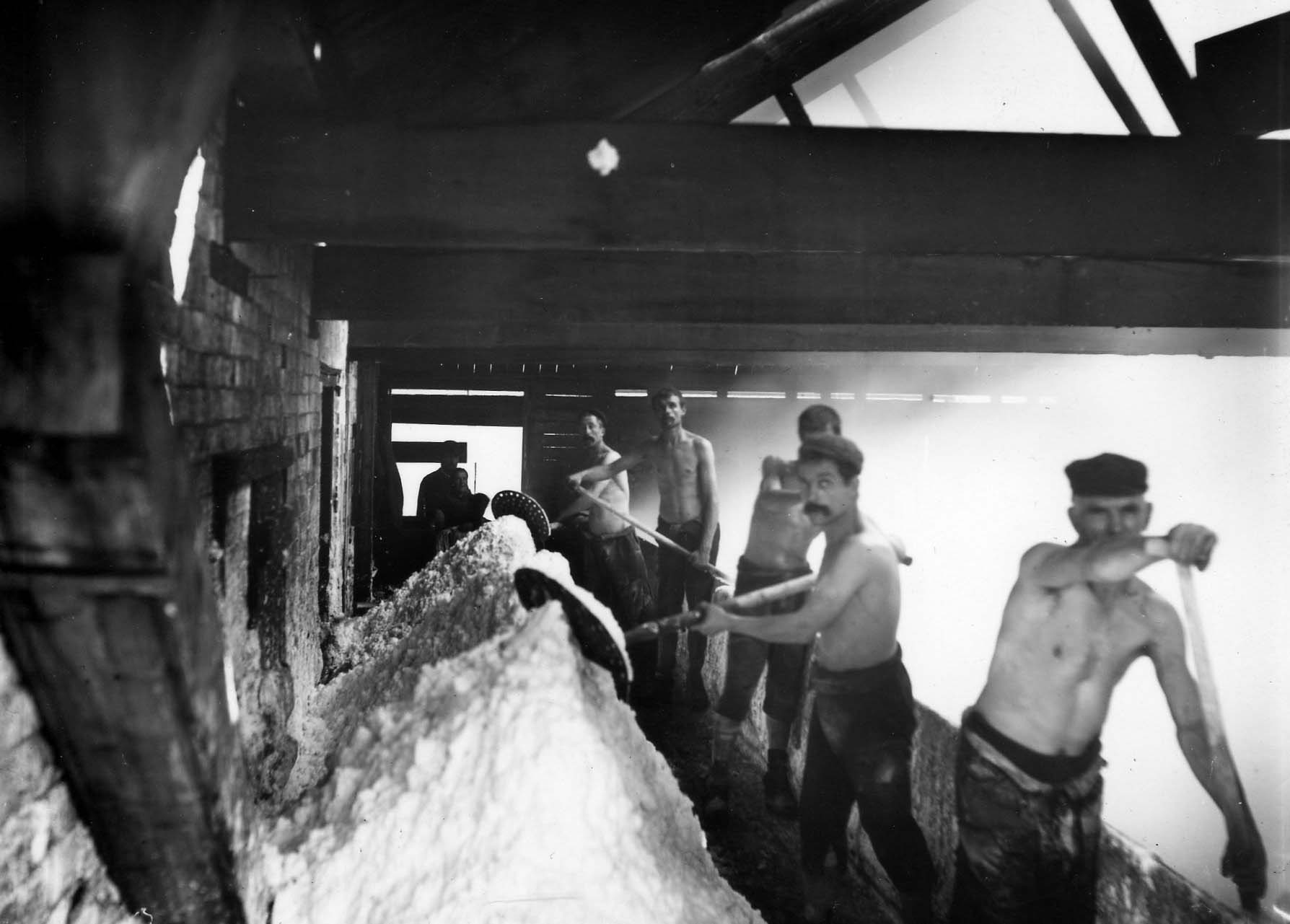 Lion Salt Works. Men work over a steaming, iron salt pan, full of brine heated by coal furnaces beneath, which boiled off the water to leave salt crystals that were raked to the sides. Circa early 20th century. Courtesy Lion Salt Works

Kate Harland, Senior Learning and Operations Officer for West Cheshire Museums, on the archive photographs held by the Lion Salt Works, which preserves the story of salt production in Cheshire

You would be excused for thinking that the archive picture above is in a salt mine, but if you take a closer look, you’ll see that white salt is being piled high in front of a steamy backdrop. Some of the images below show how the salt forms in the boiling brine pan and is scooped and drained using large sieves before being dried into cones or blocks for transportation.

Welcome to the highly ingenious process of open-pan, salt-making, which has taken place as an unbroken tradition in Cheshire since the time of the Romans.

The Lion Salt Works Museum, reopened in 2015 after a four-year £10m restoration, is the very last open-pan, salt-making site in the country (and one of the last four in the world) and charts the fascinating story and legacy of salt in the North-West, including its impact on the people, landscape and industry. 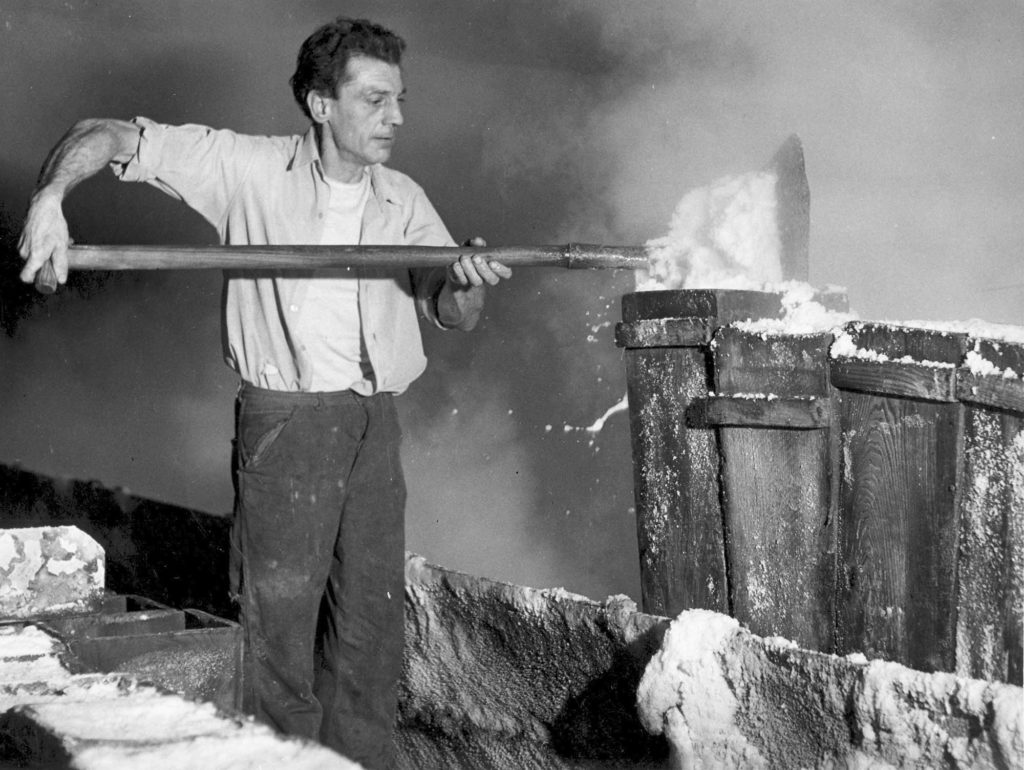 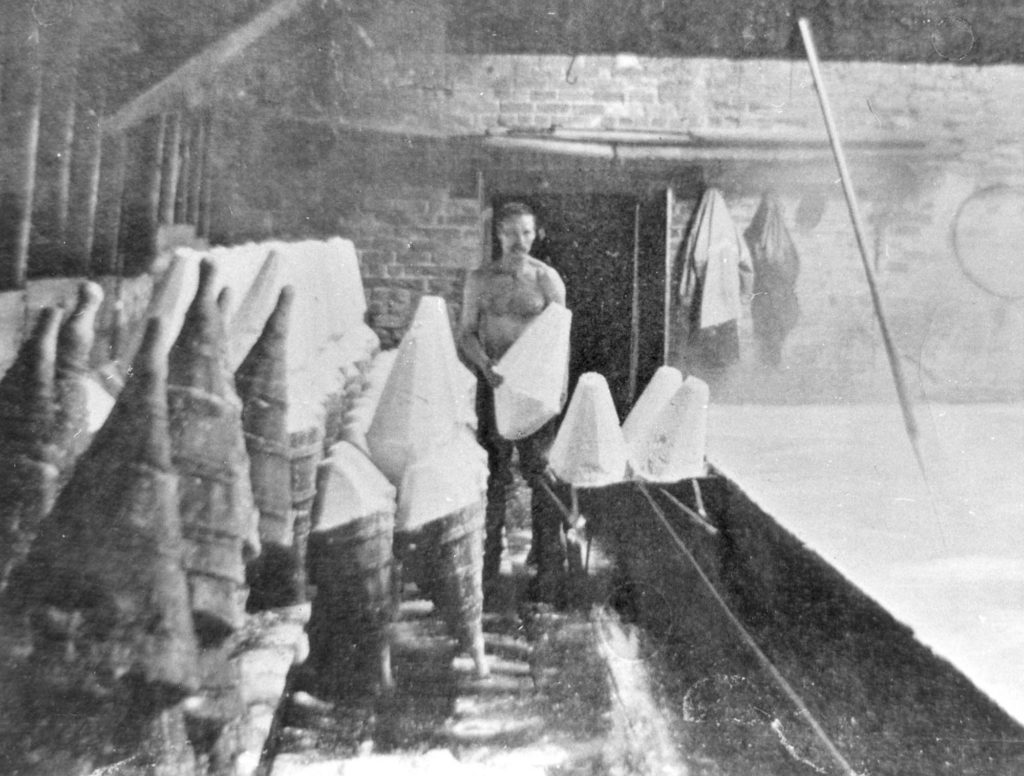 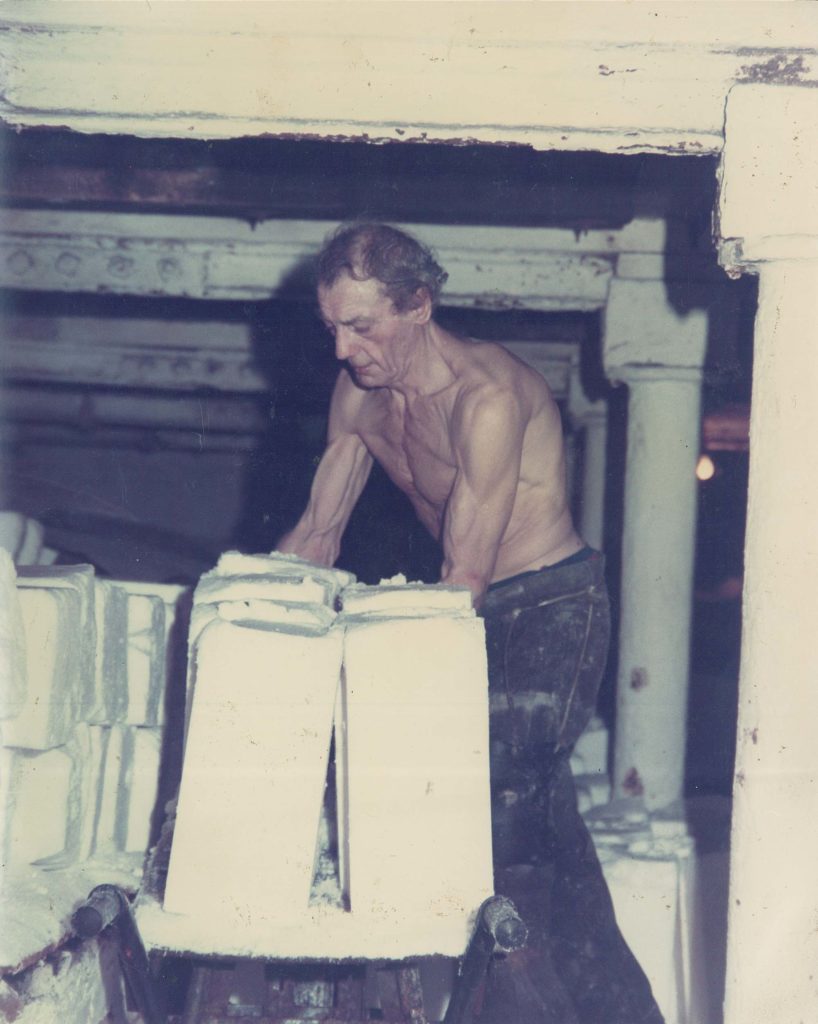 The salt is raked from the salt pan after the brine is heated, evaporates and crystals start to form. It is then scooped into salt ‘tubs’ which are left to drain in racks at the side of the pan. Once drained, the salt retains the form of the tub and can be tipped out and taken, on a barrow, to the ‘hottie’ next door.

The ‘hottie’ aka, the Stove House, contained the flues which ran horizontally from the hypocaust underneath the boiling pan. The damp blocks of salt would then be stacked on to the brick flues and dried over the course of a week to ten days.

The image above, probably taken in the 1970s, shows the salt worker moving the damp blocks from the barrow to the flue. His sinewy, muscular frame was normal for the men who worked in this over-heated, steamy, salty environment. 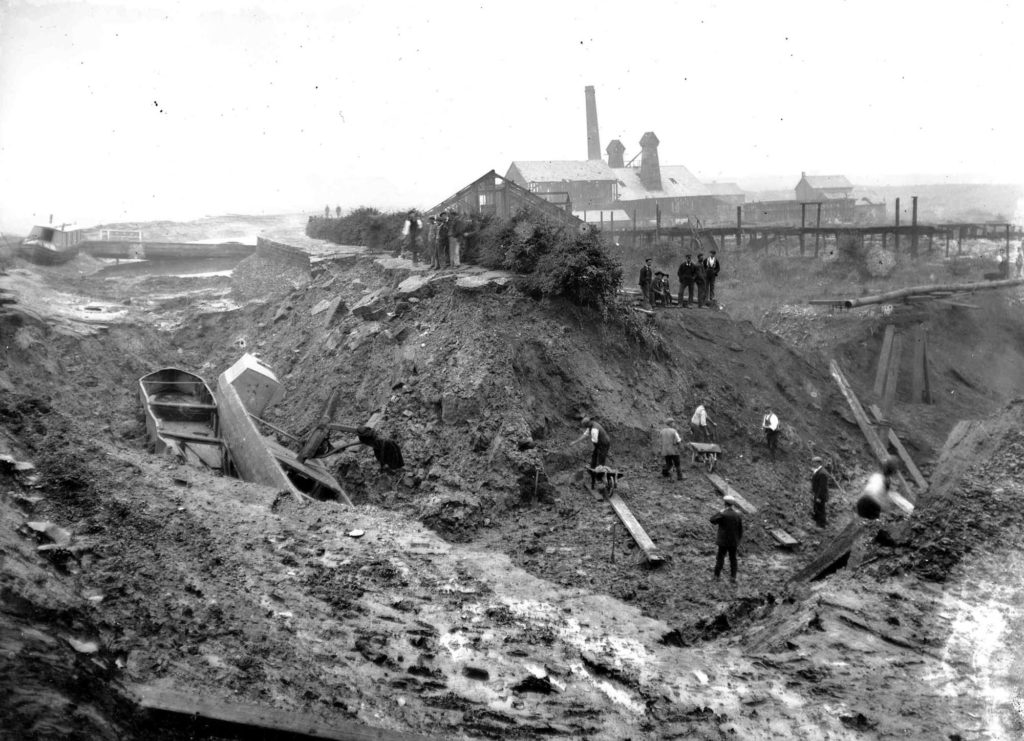 This dramatic picture taken near the Lion Salt Works shows what happened when in 1907 the bank of the Trent & Mersey Canal collapsed. If you look carefully, you realise the scale of the scene by looking at the half-buried boats on the left – but also that the clear-up is happening with wheelbarrows and shovels. 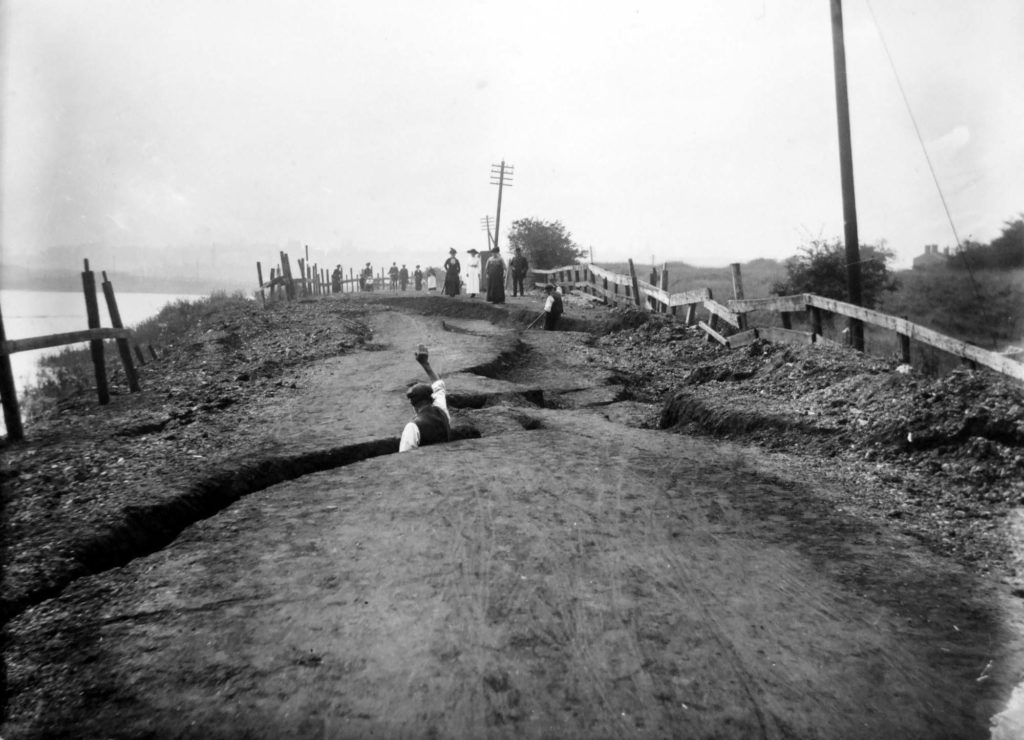 In the 18th century, Cheshire’s vast buried salt deposits were discovered and salt mining began on a large and highly competitive scale. Cheshire is still home to the country’s largest salt mine, but in the early days, miners were not aware of how much salt they could safely remove before subsidence and mine collapses occurred. The picture above shows the impact of subsidence on roads in Northwich.

But why dig when you can boil? Finding naturally-occurring brine pools in Cheshire, the Romans quickly realised that if they boiled the brine they would eventually get salt crystals. At the time, they wouldn’t have been aware that deep beneath the Cheshire plain were huge deposits of salt. 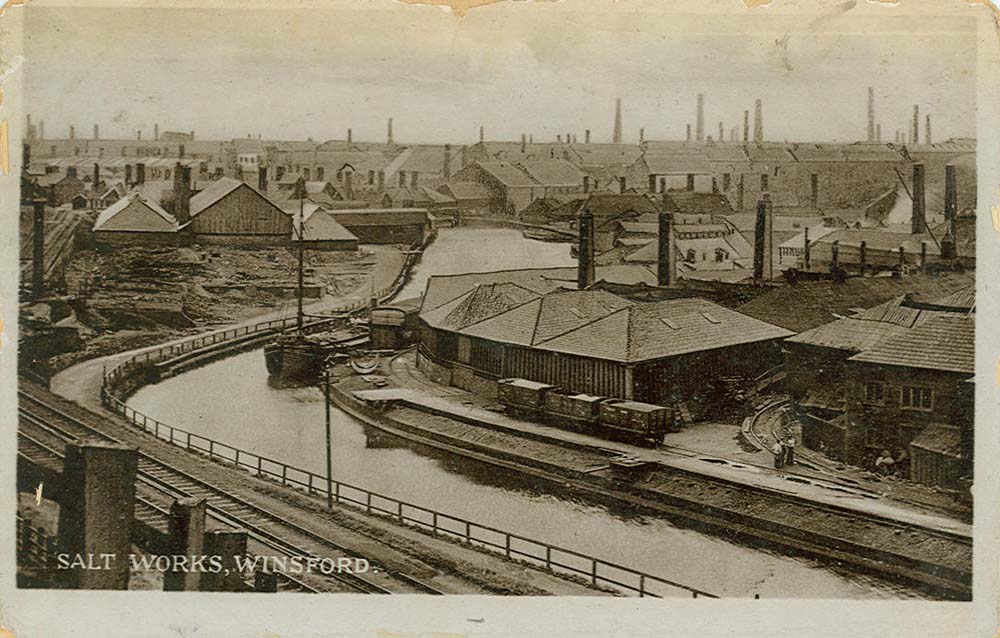 However, they knew that salt was vitally important to maintain a healthy body, which is why they allegedly paid their soldiers partly with salt (‘salary’ derives from the word, salt). We now know that salt is vital to life as well as being important in many manufacturing and chemical processes, which now abound in Cheshire.

Over the centuries, generations were quick to exploit this naturally-occurring bonanza. When technology allowed, brine was pumped out of the ground on a huge scale using steam engines. The roofs and chimneys in the image above demonstrate the extent of the open pan salt-making business in the region. 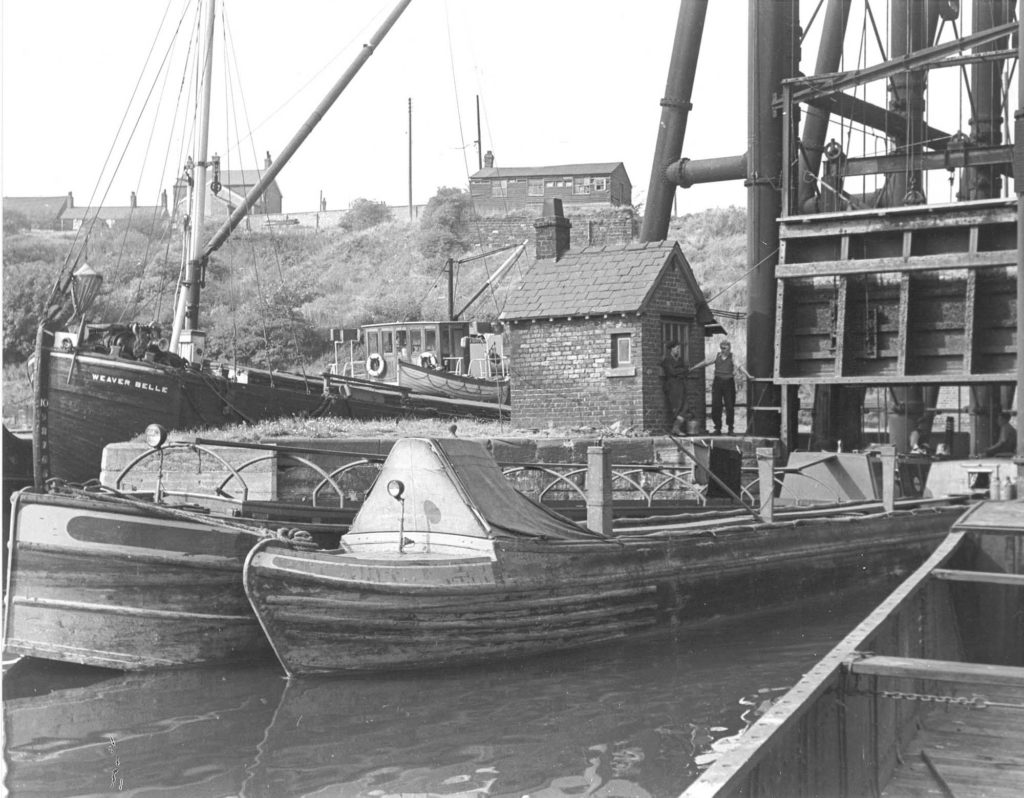 Barges at the Anderton Boat Lift on the Trent and Mersey Canal. Courtesy Lion Salt Works

In its heyday, Cheshire salt accounted for 96 per cent of all Britain’s salt and was later exported worldwide. One of the reasons the Trent and Mersey Canal was constructed was to allow the swift movement of salt to Liverpool (for which, salt was a founding industry). Salt later became an important part of the notorious ‘Triangular Trade’, acting as ballast on the outward journey and later successfully traded in Africa.

This picture shows some of the barges and narrowboats at the bottom of the Anderton Boat Lift, a two caisson lift lock near the village of Anderton, Cheshire, which provided 50-foot link between the River Weaver and the Trent and Mersey Canal, allowing the movement of this lucrative cargo to Liverpool. 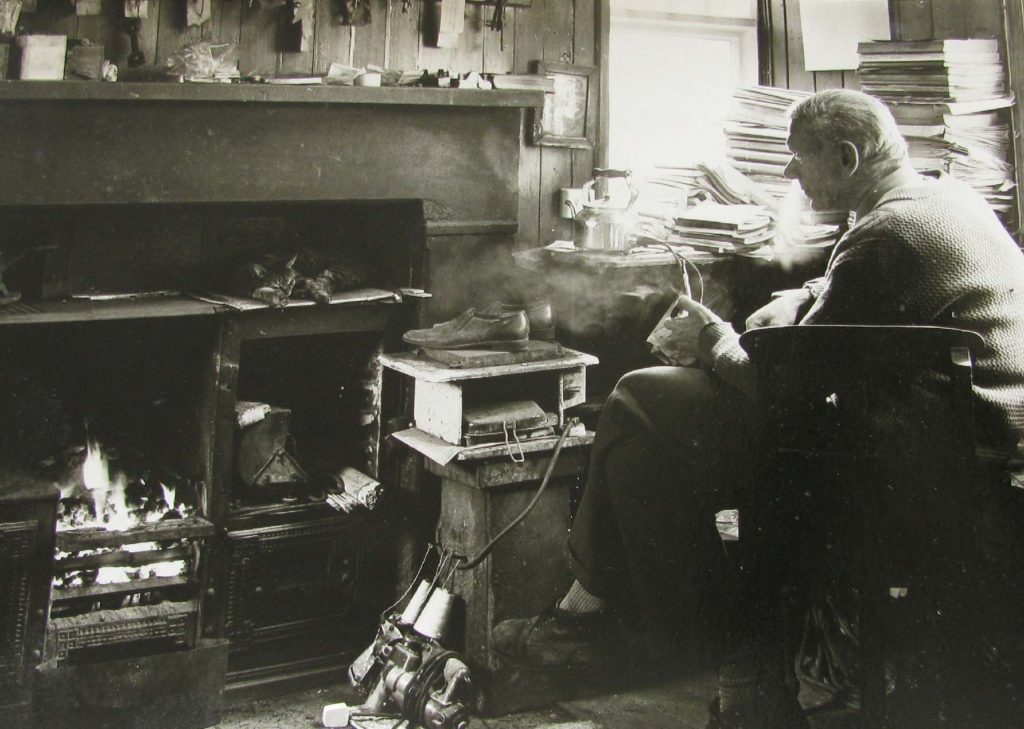 The Lion Salt Works Museum was the very last open-pan, salt-making site to close in 1986. It was run by six generations of the Thompson family and this wonderful picture shows the last owner, Henry Lloyd Thompson – and his cat – in his Manager’s Office. Even before it closed, the site’s importance was recognised and for more than thirty years, Trustees of the site worked tirelessly to preserve the site, finally succeeding with the help of Chester West & Chester Council and the National Lottery Fund.

In the first two years of opening, the site has won seven awards, including in 2016, the National Lottery’s ‘Best Heritage Project’ after a public vote. We like to think Henry Lloyd Thompson and his cat would have approved.

The Lion Salt Works is a restored historic open-pan salt making site, in the village of Marston, close to Northwich. The site lies adjacent to the Trent and Mersey Canal, close to Weaver Hall Museum and Workhouse, and the historic Anderton Boat Lift. This £10.23 million project opened in June…