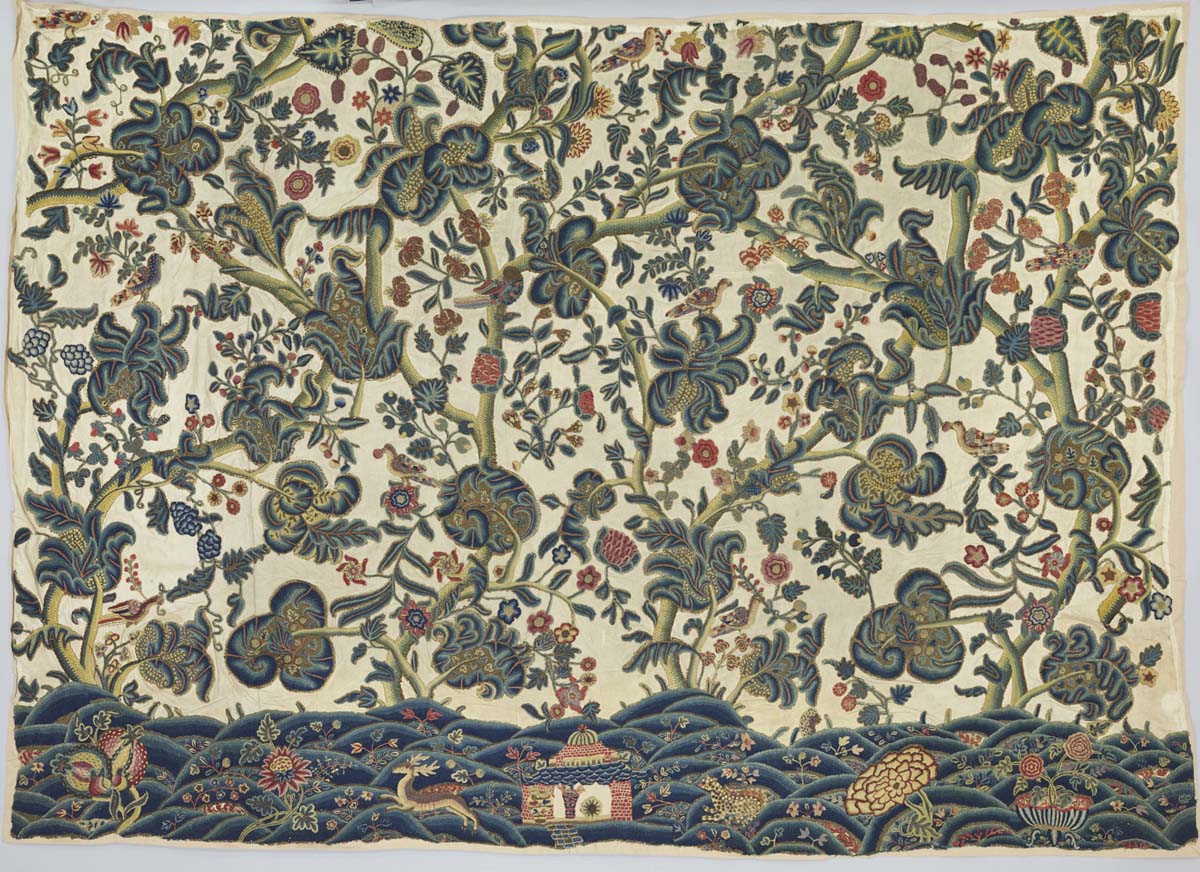 After 10 years of painstaking restoration, a set of 350-year-old embroideries has gone back on display at Birmingham’s Aston Hall

The embroidered hangings that adorn the 17th century bed in the King’s Chamber at the Jacobean mansion, Aston Hall in Birmingham, were the preserve of only the wealthiest families in the 17th century.

Made using a type of embroidery called crewel work, which was a much favoured style during the Jacobean period, the hangings comprise two curtains, pelmets and a bed covering that are fit for a king – albeit one beset by a devastating war.

Sir Thomas Holte (1571 – 14 December 1654) was the colourful English landowner who in the turbulent seventeenth century built and furnished the hall and who gave King Charles I lodging on his travels south in October 1642 during the outbreak of the English Civil Wars. Several days later Charles took part in the first set piece battle of the First English Civil War at Edge Hill.

The hall was later garrisoned by Royalist troops who defended it from the armies of the Parliament – whose bombardment can still be seen in a cannonball hole preserved in the hall’s central staircase. 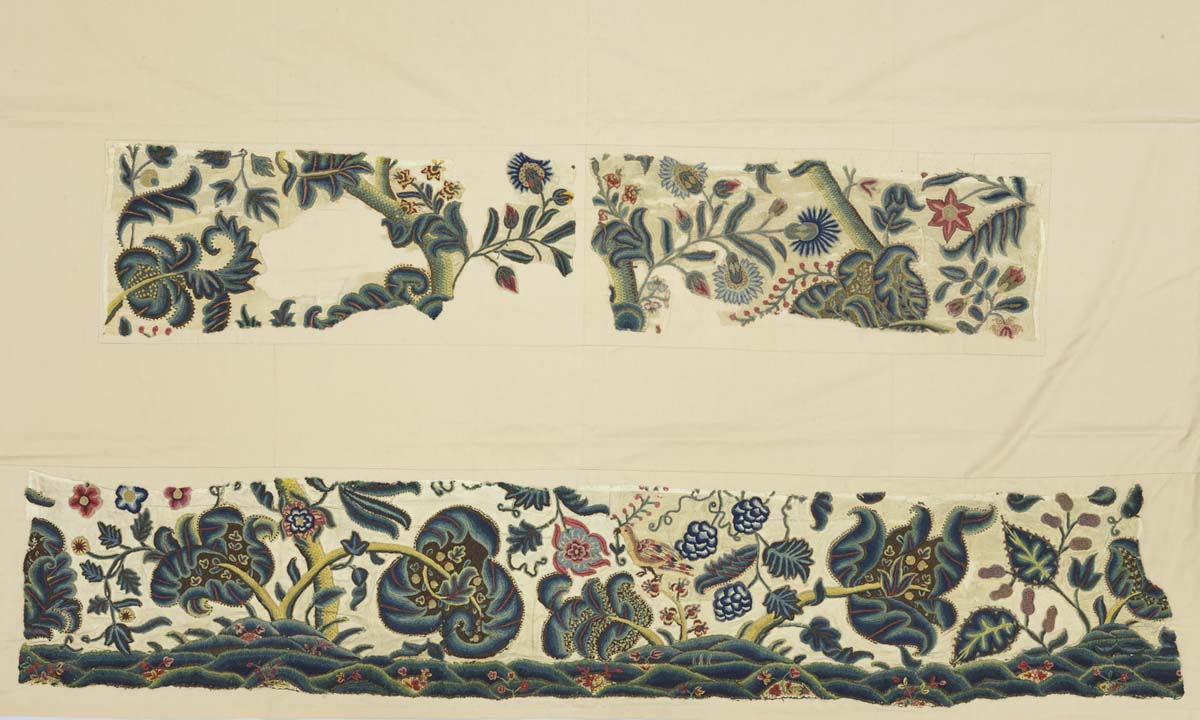 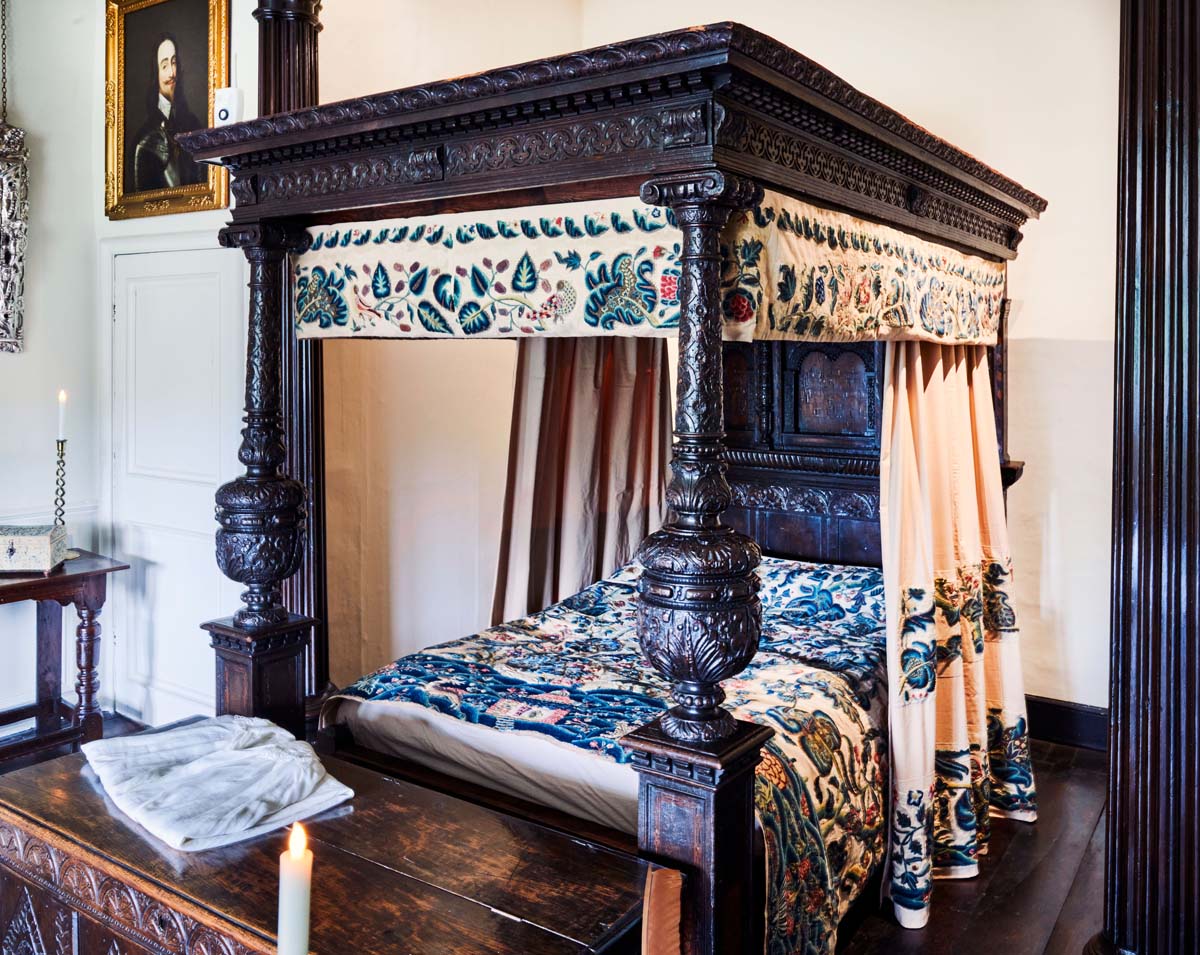 Aston Hall eventually capitulated, but despite the privations of the Civil War the house and its contents survived largely intact and eventually passed into the care of Birmingham Council and its Museum Trust. Today it is one of the city’s most iconic buildings offering a fascinating insight into the Jacobean period.

But over the centuries the bed hangings in the King’s Chamber had deteriorated, with the exquisite Tree of Life pattern, featuring flowers, birds, deer and a Chinese-style pavilion, in serious danger of being lost forever.

So, in 2009 the conservation team at Birmingham Museums enrolled the help of heritage volunteers from The Arts Society in Arden, Solihull and Friends of Birmingham Museum & Art Gallery to help with the lengthy but important restoration project.

The aim of the restoration project was to stabilise the hangings to prevent further damage – this involved delicate conservation cleaning, couching loose threads and stitches, repairing holes and weak areas and securing and piecing together incomplete sections on to new linen.

In all the project – utilising the skills of volunteers – took ten years to complete. 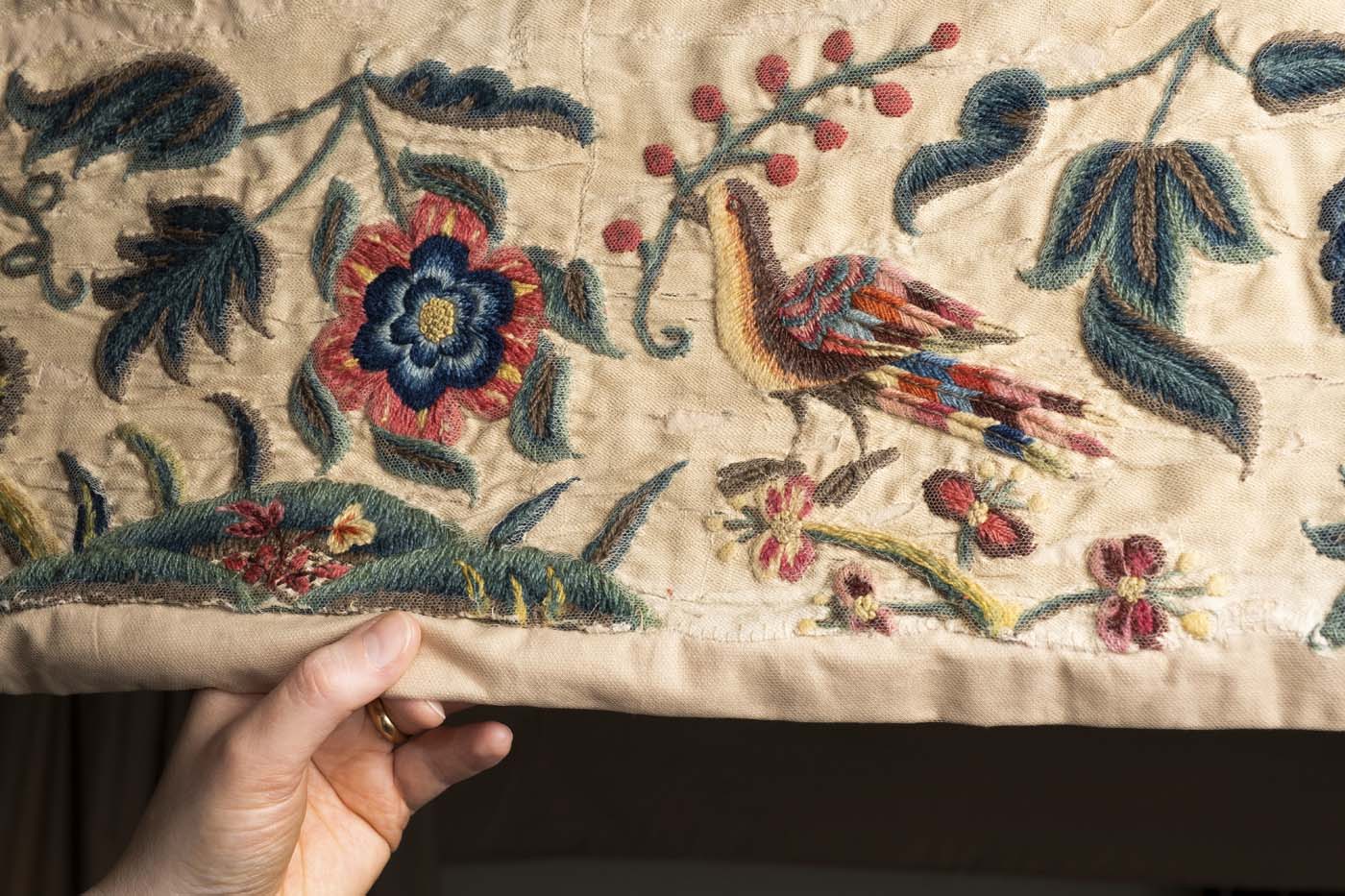 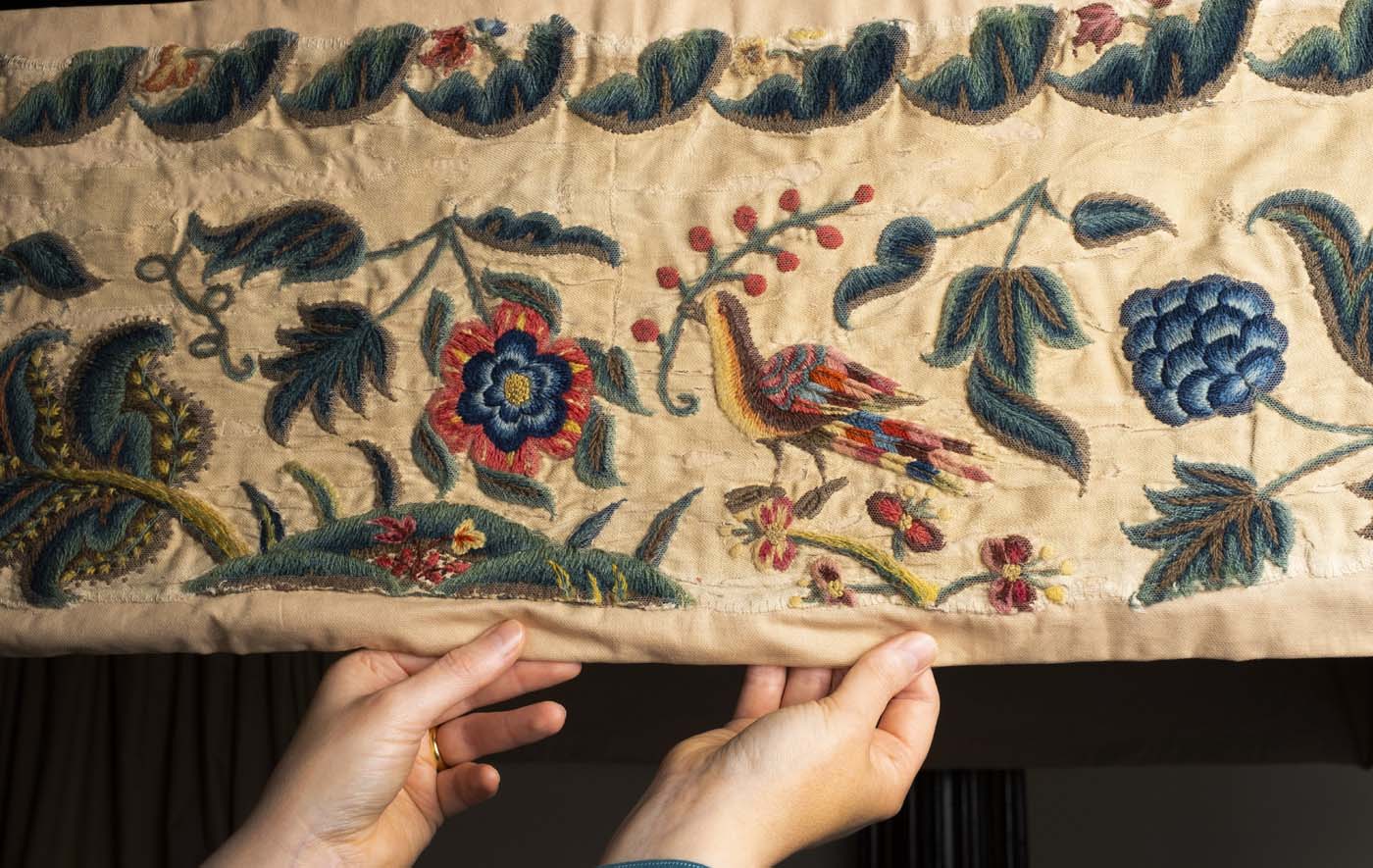 “It’s a major achievement welcoming these embroideries back on display at Aston Hall,” says Jane Thompson-Webb, the Conservation Team Leader at Birmingham Museums. “Before the start of the restoration project, they were very dirty, the colours were dull, and it was obvious that the embroideries were in a fragile state and at risk of being lost forever.”

The wool threads are coloured with natural dyes in shades of blue, green, yellow, orange, red and pink.

“They’ve been superbly restored thanks to our dedicated team of volunteers – with their hard-work these historic embroideries and their fabulous colours, intricate scenes and delicate details have been preserved for many more years to come.”

One of the last great homes to be built in the flamboyant Jacobean style, the mansion which was built between 1618 and 1635 for Sir Thomas Holte. In 1643 the house was badly damaged in an attack by Parliamentary troops. Scars left by cannon-shot can still be seen on its…