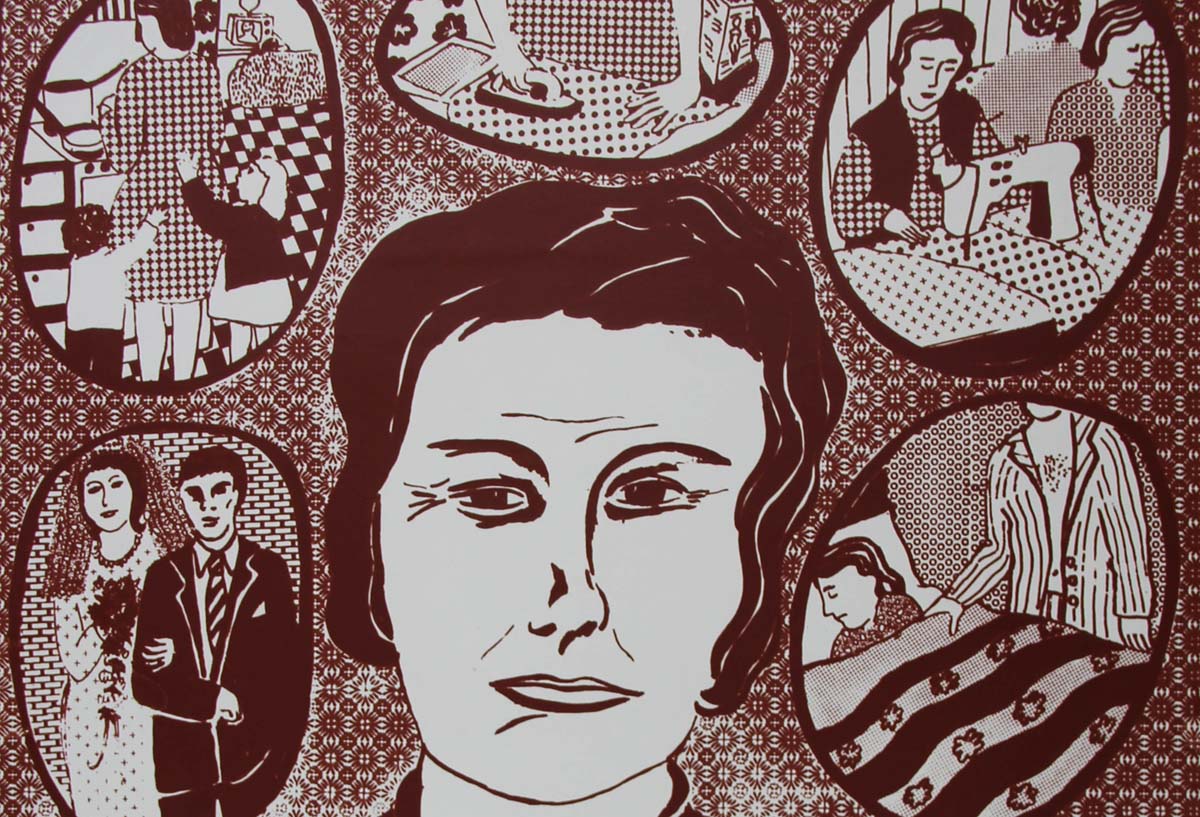 Sorcha Turnbull, volunteer at Glasgow Women’s Library on their poster collection and what it tells us about posters as protest

From protests, to promotion, to propaganda, posters have been used throughout history as a powerful instrument of mass communication. Glasgow Women’s Library (GWL) boasts a large collection of posters dedicated to women’s lives, struggles, achievements and fights for equality. It includes suffragette-era posters as well as modern day posters, those promoting LGBTQ+ rights and those advertising women’s events. Posters can be found from across the globe and promote events as low key as local, female only club nights to international sporting events.

GWL’s collection contains several posters from the See Red calendar 1977. The See Red Women’s Workshop was set up in 1974 in Camden, London with the aim of tackling sexism in the media, raising awareness of domestic violence and highlighting gender inequality in all sectors.

In an attempt to promote change and challenge inequality, the artists used a combination of striking images and bold humour in their calendar. The month of April reads: 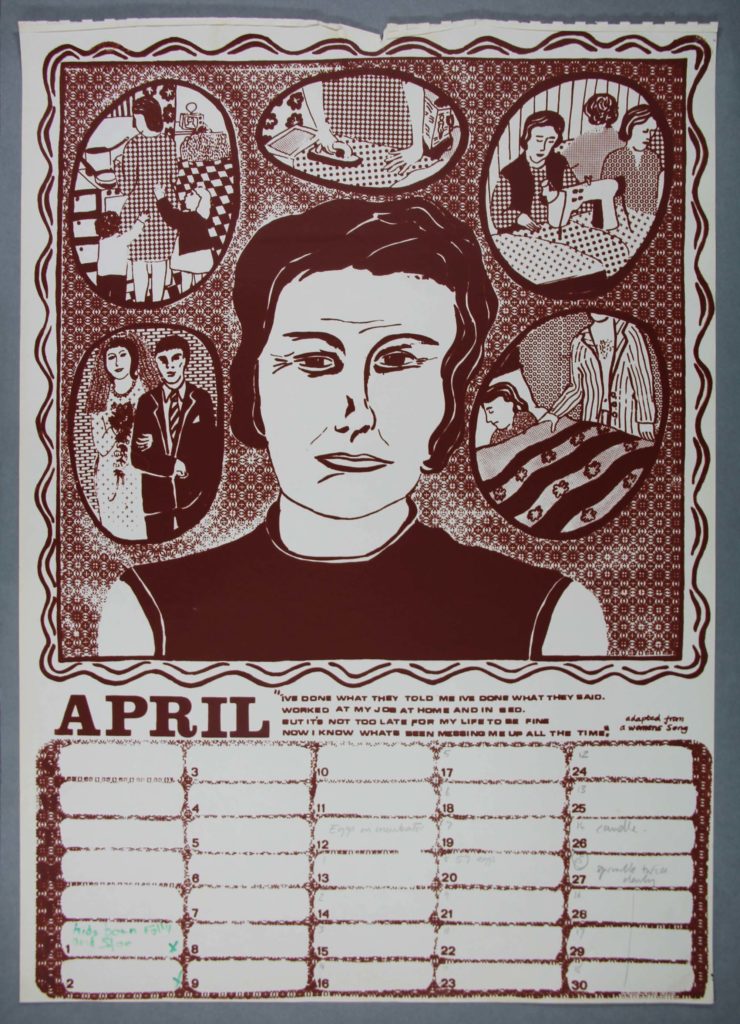 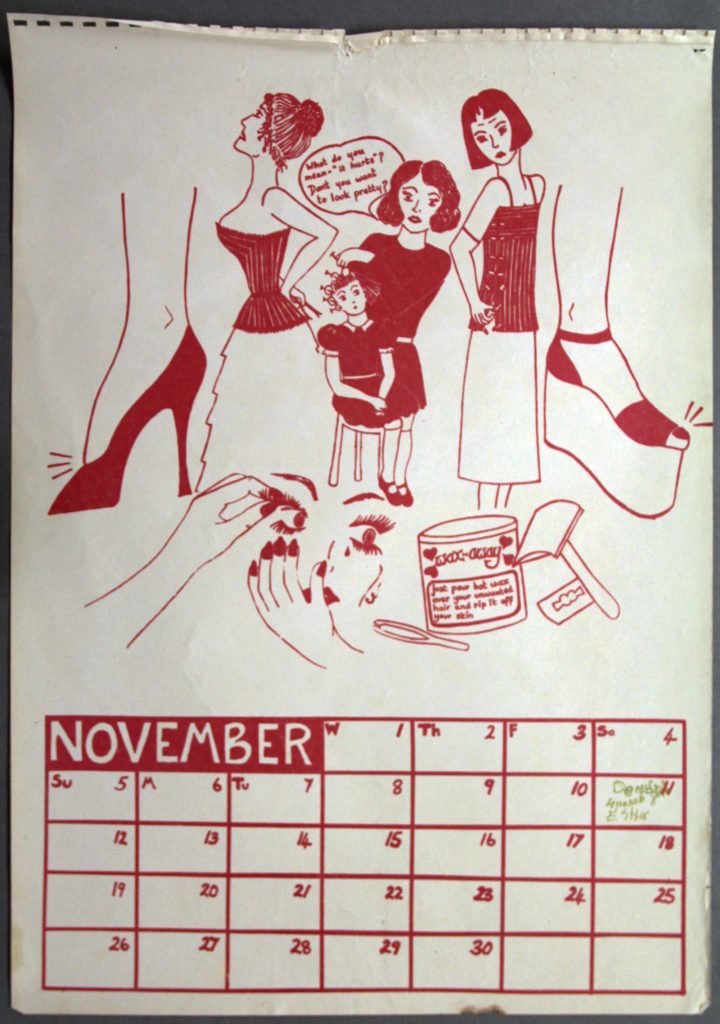 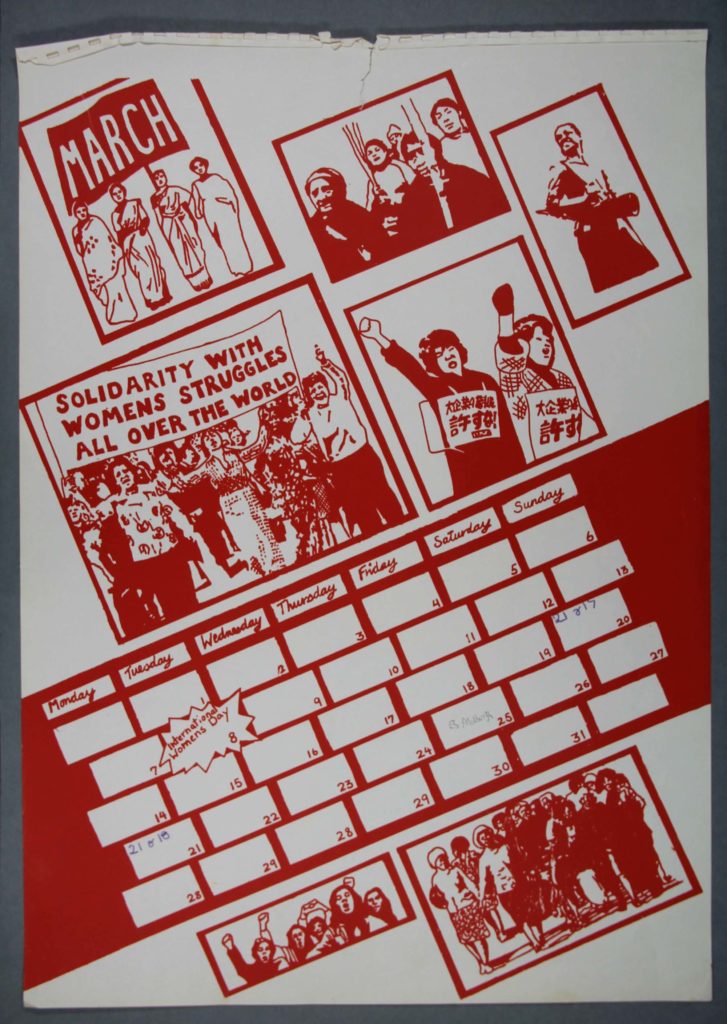 Pictured above this bold statement is a woman’s face surrounded by illustrations of the ‘traditional roles of women’ (sewing, childcare, marriage, cooking and ironing) which See Red challenged.

See Red’s commitment to political change, as well as social change, is illustrated in the month of March which is dedicated to their ‘solidarity with women’s struggles all over the world’.

Also included in the GWL’s collection are several posters by the feminist activist artist group Guerrilla Girls which was formed in New York City in 1985. Under the anonymous cover of gorilla masks, the Guerrilla Girls use their artistic vision and skill to protest discrimination and promote inclusion through posters, stickers, museum exhibitions, interventions and actions both in the U.S and worldwide.

My personal favourite Guerrilla Girls poster has, in bold black writing, ‘Do women have to be naked to get into the Met. Museum?’ plastered across the top. This exposed sexism within the art industry and was a response to the 1984 Museum of Modern Art, New York’s International Survey of Painting and Sculpture, in which less than 10% of work was from female artists.

Guerrilla Girls, Do Women Have To Be Naked To Get Into the Met. Museum? 1989. © courtesy www.guerrillagirls.com 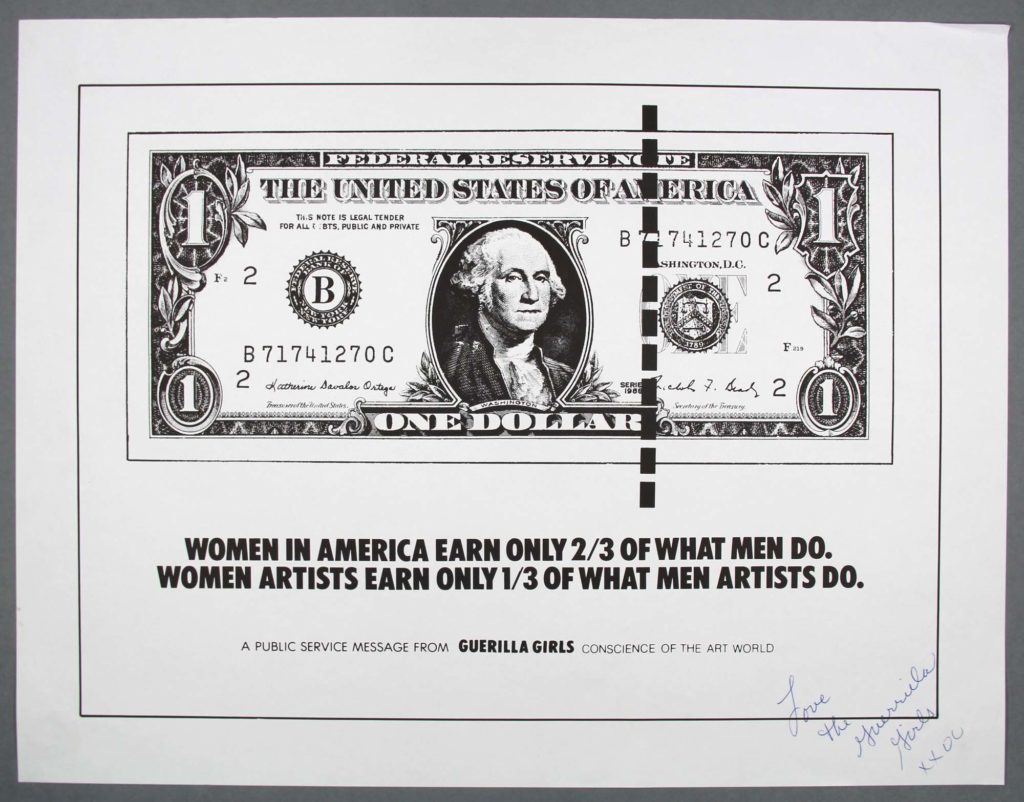 Women In America Earn Only 2/3 Of What Men Do, 1985. © courtesy www.guerrillagirls.com

The theme is continued in another of their well-known posters which reads:

The combination of these words and the image of a dollar note being divided into thirds, compares the already deeply unequal gender pay gap to the heightened inequality which exists within the art world.

In contrast to the Guerrilla Girls colourful, statement artwork, GWL is also host to a more subtle, yet equally as powerful, set of posters which illustrate the harsh reality of men’s violence against women. The posters, created by Scottish organisation Zero Tolerance, use powerful photography to raise awareness of violence against women and, consequently, to play an active role in fighting to eliminate this violence.

Although Zero Tolerance use the medium of poster very differently to the radical and bold Guerrilla Girls, they both serve the same purpose of raising awareness. Both sets of posters are evocative and use imagery to attract attention – perhaps this is the secret to the poster’s cornerstone role in protest. 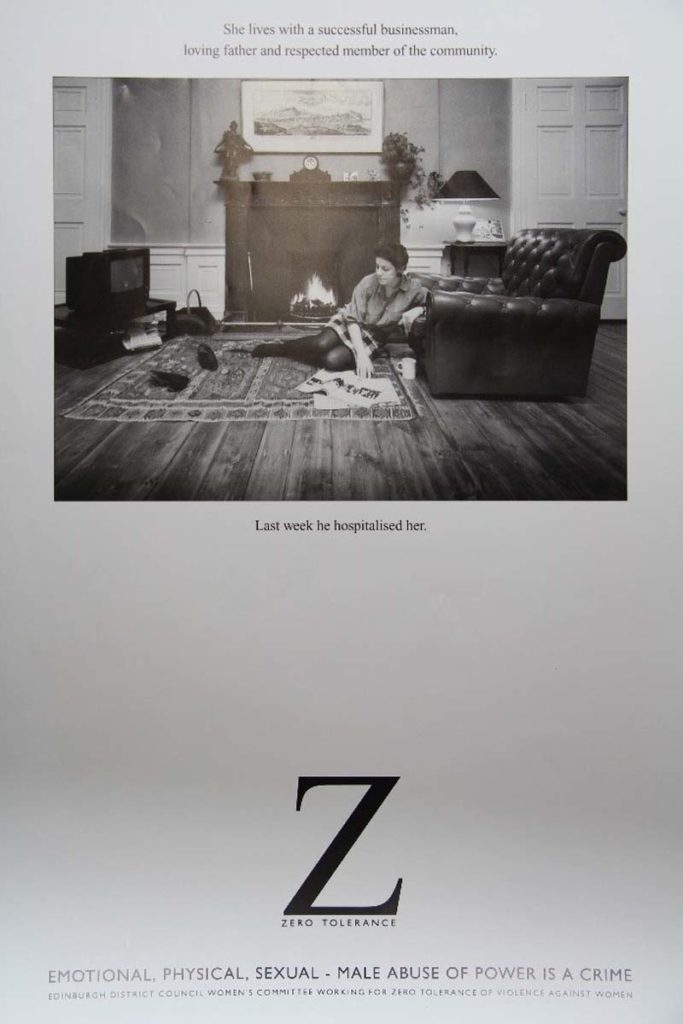 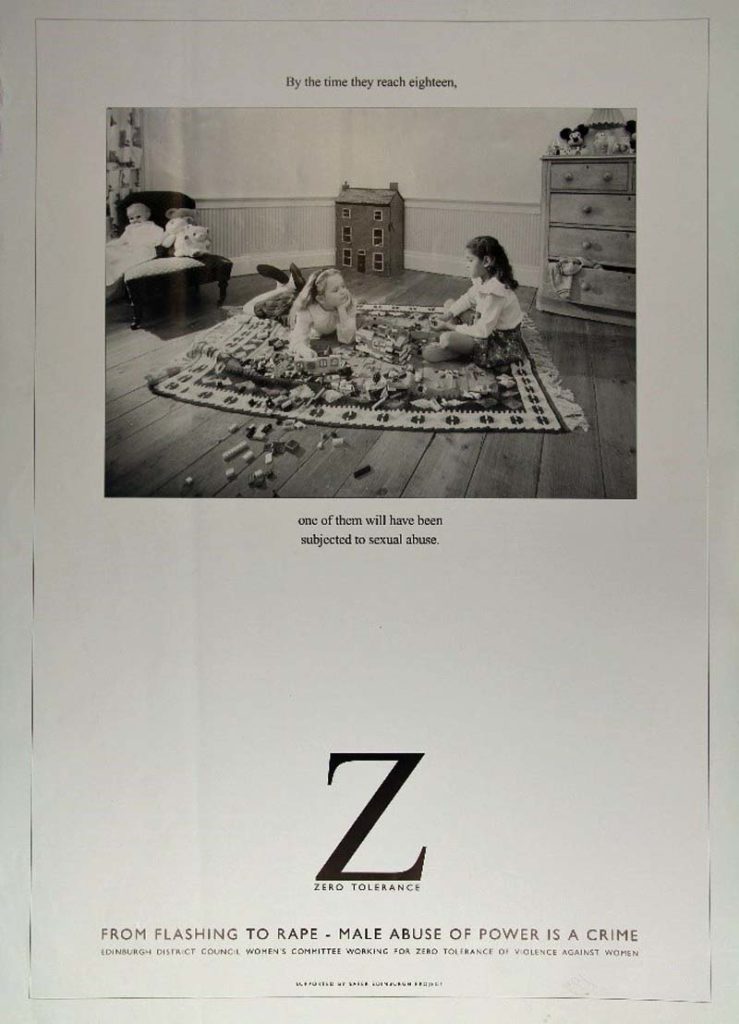 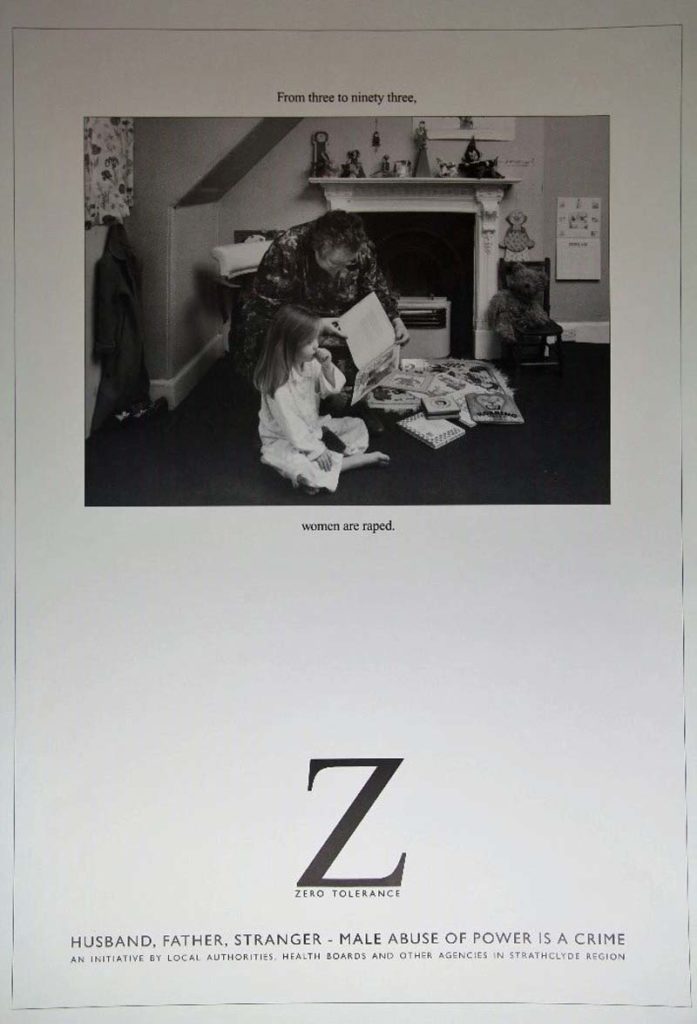 Another poster worth highlighting is from Iceland in 1987. It shows the faces of the 56 members of the Kvennalistinn (The Women’s List Party). The Kvennalistinn feminist political party played an active role in Icelandic politics from 1983 and held at least three parliamentary seats from 1983 until 1999. The significance of this poster in the collection lies in its demonstration of solidarity with feminist movements across the globe. 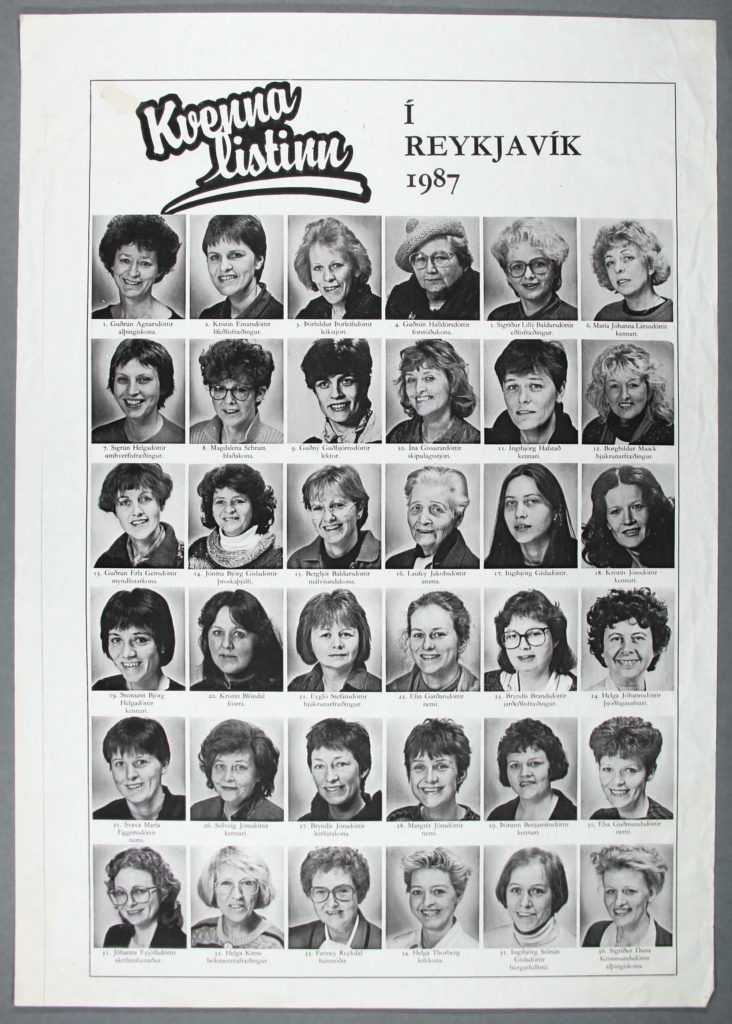 The 56 members of the Kvennalistinn (The Women’s List Party).

It is a popular claim that, in the last decade, social media has somewhat replaced the role which posters played in protest and social movement from the 60s onwards. Where posters were used for adverting new products and service, Facebook adverts are now common place. Twitter and other platforms are used as a powerful tool for protest as, once sent, a tweet can be read by millions.

Despite its critics, social media and the internet play a key role in the wide-reaching, international promotion of equality and human rights, but what can posters give us which technology can’t? Posters empower. Through reproduction and duplication, posters spread messages.

Powerful images on posters inspire and educate. Perhaps most importantly, posters act as a symbol, and successful posters can often be associated with particular movements and causes. Imagining the current anti-Trump protests, or Refugees Welcome campaign without posters is proof of their continuous relevance. Posters and protest continue to go hand in hand.

Glasgow Women's Library is a provider of information by and about women. It is a popular meeting place for women and its creative, supportive environment acts as a catalyst for projects, friendships and laughter.