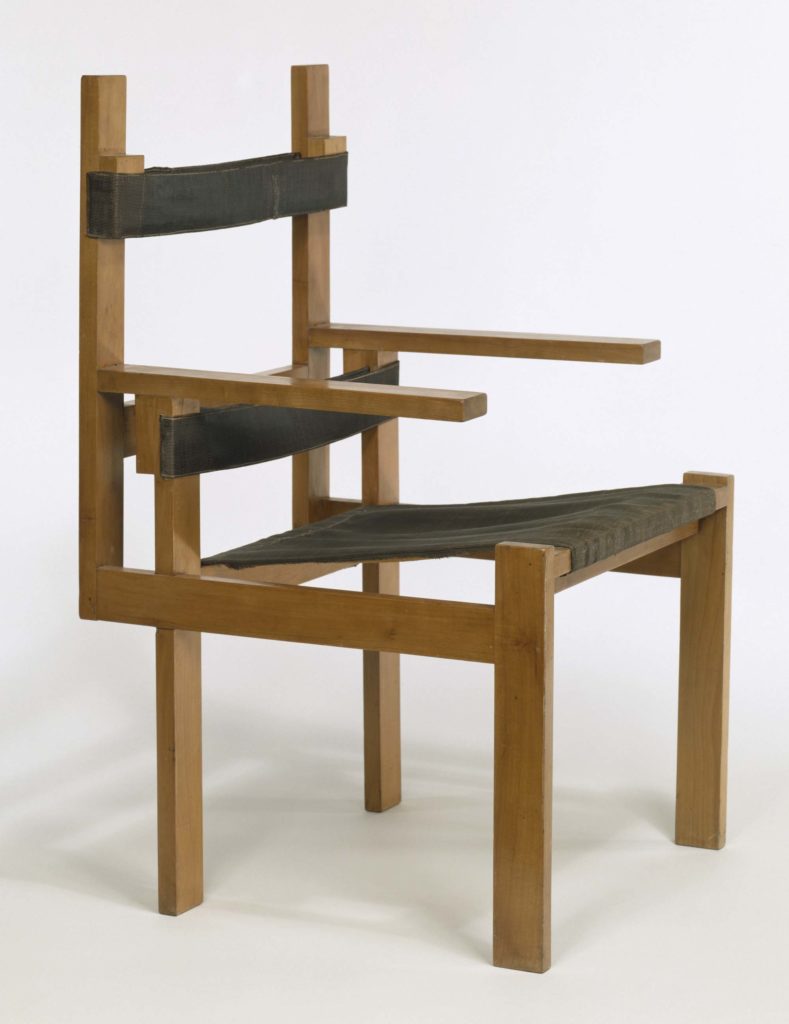 Can you see the Arts and Crafts influence? Marcel Breuer Armchair 1922 © Estate of Marcel Breuer / Victoria and Albert Museum, London

When you think of the Arts and Crafts movement and its influence on the art that came in its wake, the Bauhaus is not something that immediately springs to mind.

Yet William Morris’s enduring influence was recognised by Walter Gropius, founder of the Bauhaus, who in 1923 acknowledged the debt his school in Weimer Germany owed to ‘Ruskin and Morris of England’.

And when you really ponder it, it does make sense. The unity of fine art and craft, the integrity of design and manufacture and the central role of architecture in the ideals of Morris and the English Arts and Crafts movement are all key tenets of the groundbreaking art school established by Gropius in a quest for Gesamtkunstwerk, or the ‘complete work of art’.

The William Morris Gallery is exploring this unlikely union with an exhibition of ceramics, textiles, furniture, prints, watercolours and photographs created at the Bauhaus juxtaposed with objects produced by Morris and his circle.

Pioneers: William Morris and the Bauhaus is the first exhibition in the UK to fully explore this relationship and is timed to coincide with the centenary of the founding of the Bauhaus in 1919. It brings together over 60 objects from nine international and domestic lenders, some of which have never been displayed in the UK before.

In them you may even be able to trace the elusive transition from the rustic medievalism of Arts and Crafts to the organisational modernism of Bauhaus. 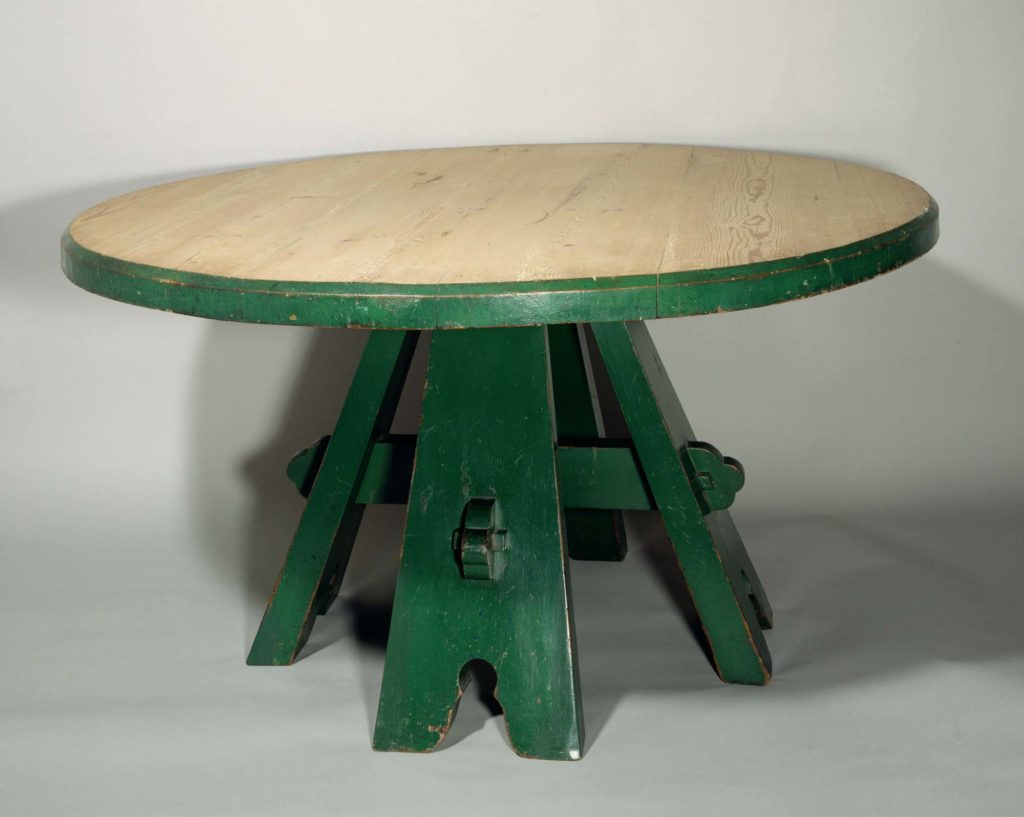 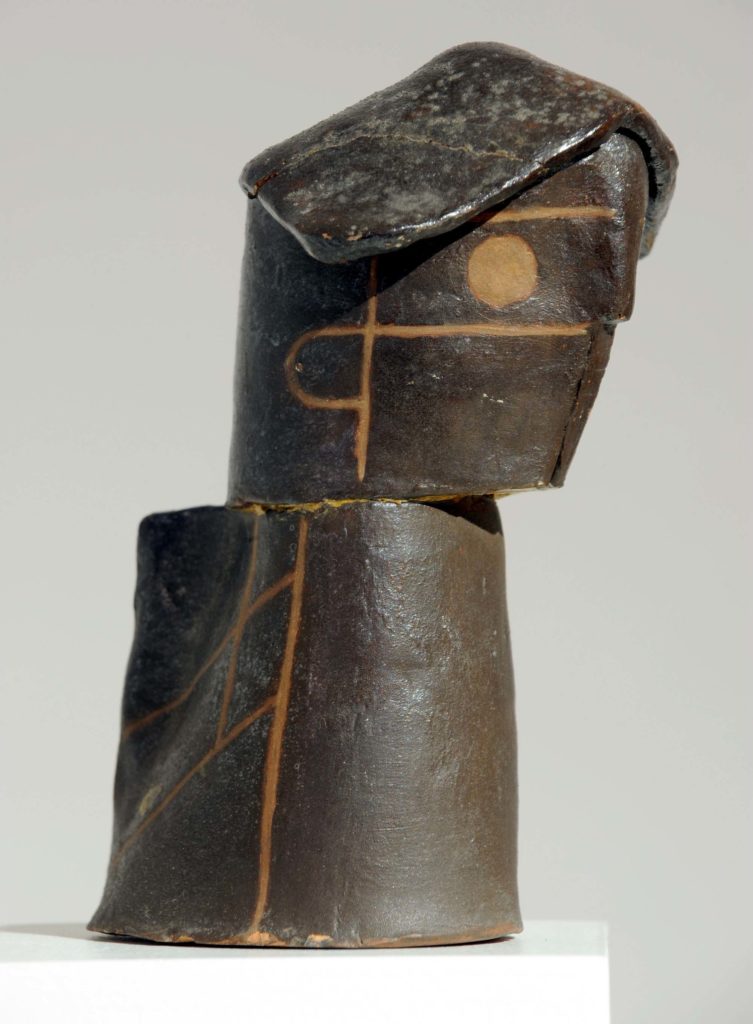 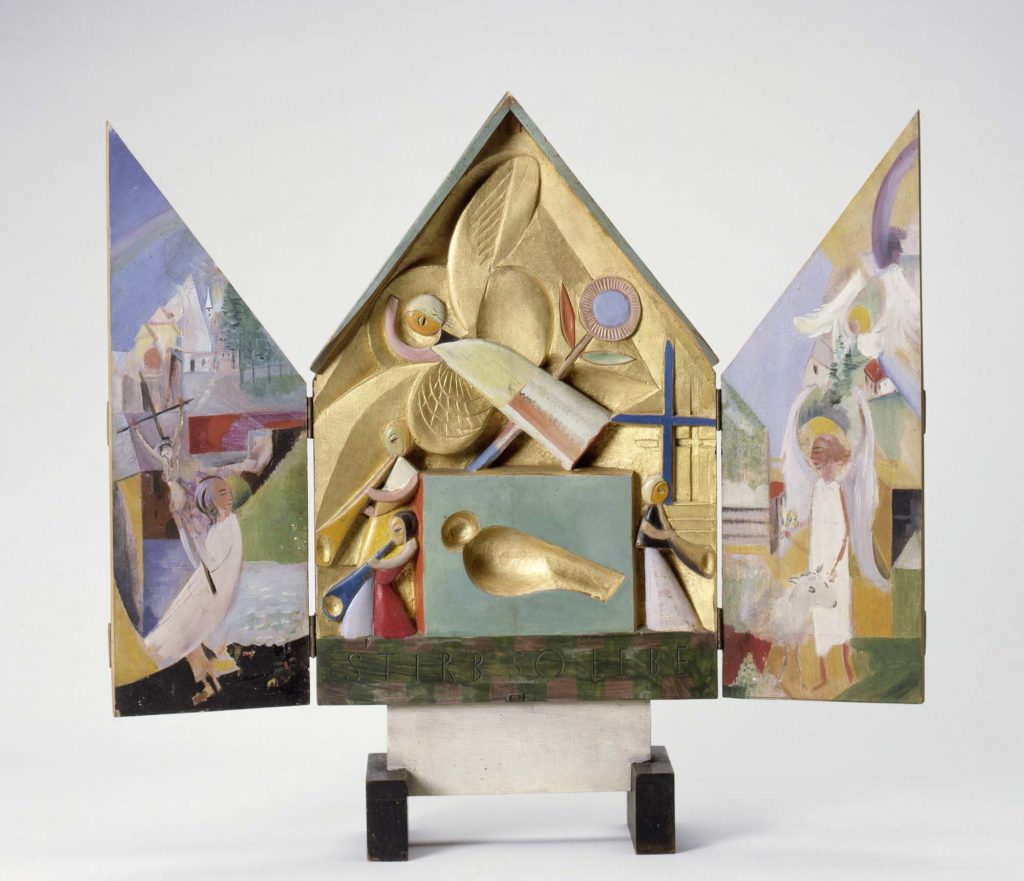 Take, for example, the wall hangings of William Morris, with their vines, doves and roses and the woven hangings of an artist like Benita Koch-Otte, who created textile artworks full of block-like, modernist forms. Both are displayed here and there’s a common geometry in both artworks. And in every work of art or stick of furniture influenced by Morris you will find a simplicity of design that arguably paved the way for the modernist aesthetic of the 20th century.

Morris’s belief that furniture should be composed of basic forms and easily manufactured by craftsmen without specialist training is demonstrated in a table he designed for his own use in the 1850s. This ‘honest’ construction is echoed in an armchair made by Marcel Breuer as a young student at the Bauhaus 70 years later. When the Bauhauslers subsequently moved from individually-produced objects to designing for industry, the principle of simplicity was retained. A chair by Erich Dieckmann was designed to be manufactured with inexpensive modular parts.

This concept of craftsmanship, sometimes overlooked in histories of the Bauhaus, is really at the centre of this exhibition, which focuses on the early years of the Bauhaus in its first iteration at Weimar between 1919 and 1925, when the experimental workshops included pottery, weaving and joinery.

“Like Morris, Gropius used the image of the medieval cathedral as the model for total architectural harmony”

Architecture also unites the two movements and the exhibition highlights the influential study of British domestic architecture by the German cultural attaché Hermann Muthesius, Das Englische Haus (1904), in which Morris’s Red House, designed by Morris’s friend Philip Webb and decorated with wall paintings and objects made by members of their circle, was celebrated as the first modern dwelling to be ‘conceived and built as a unified whole, inside and out’.

And like Morris, Gropius used the image of the medieval cathedral as the model for total architectural harmony, in which the fine and decorative arts were combined to create a unified whole. Prints by Lyonel Feininger reveal the continued significance of architectural motifs while photographs by Lucia Moholy Nagy document the purpose-designed accommodation built after the Bauhaus relocated to Dessau.

A sense of community underpinned Morris’s Arts and Crafts circle. Objects were often created collaboratively, such as tiles designed by Edward Burne-Jones and decorated by Lucy Faulkner, and used to furnish their surroundings, as with the glassware Philip Webb designed for Red House. The activities of the Bauhaus were similarly community-oriented; a photograph by Iwao Yamawaki shows Bauhaus students socialising in the cafeteria surrounded by stools designed by fellow student-turned-master Marcel Breuer. 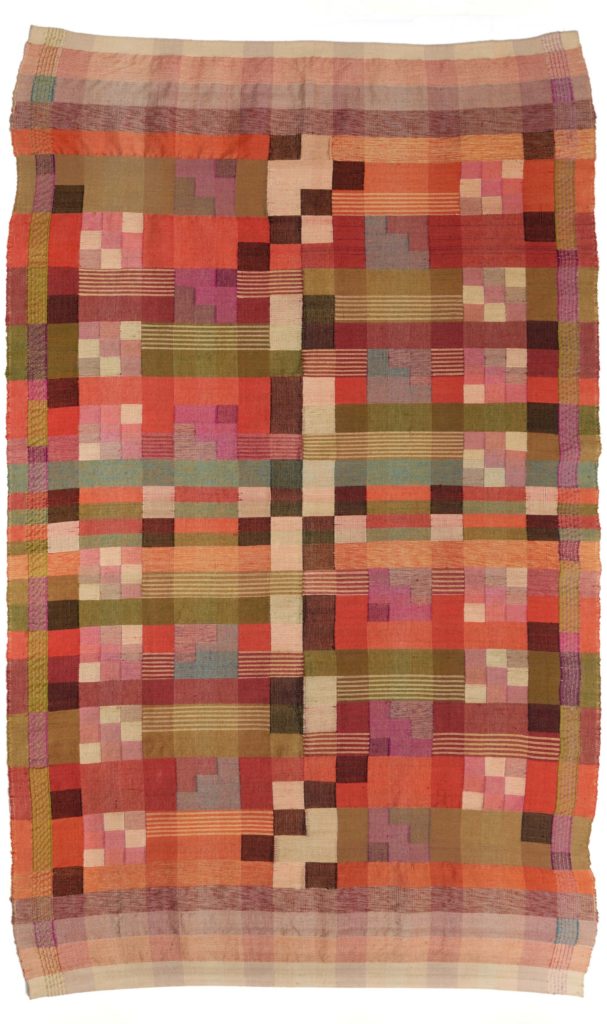 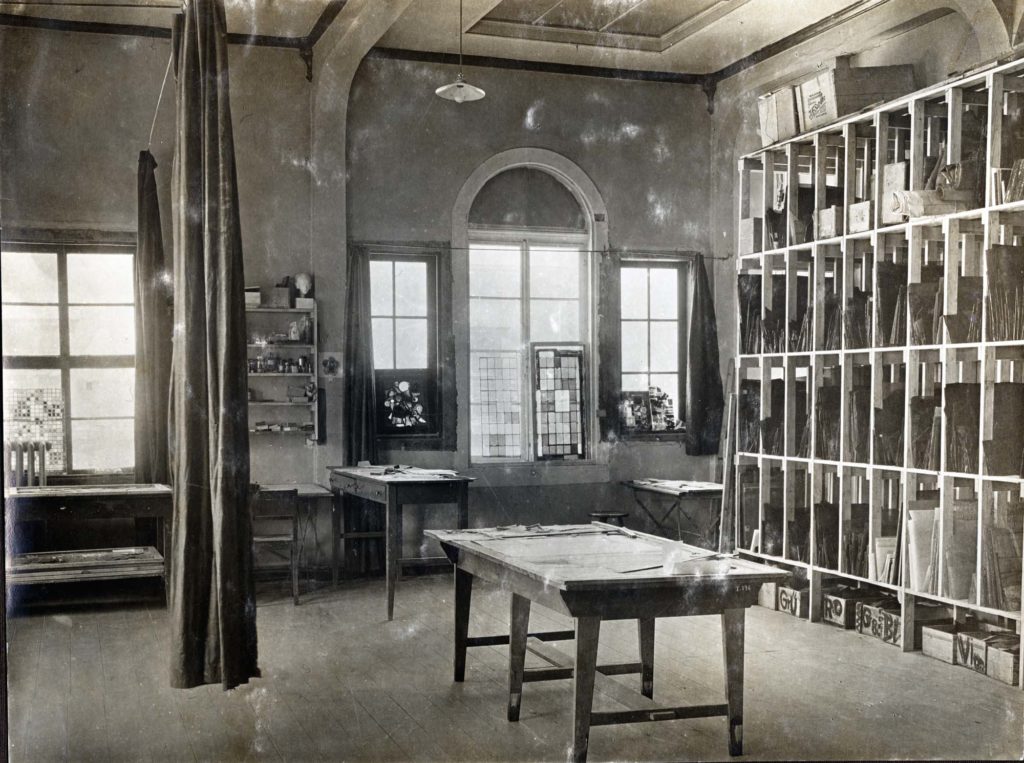 The devastation of the First World War gave the Bauhauslers the sense of being pioneers building a brand new world. Drawings by Gerhard Marcks, on loan from Gerhard Marcks Haus in Bremen, show how this feeling was intensified in the rustic surroundings of Dornberg, a small rural village in the outskirts of Weimar where the pottery workshop was based. Students and masters even dug their own clay while the objects they produced were often made in collaboration with the local master potter Max Krehan.

The sense of community extended to a desire to improve society for everyone; while Morris aspired to ‘art made by the people and for the people’ the Bauhaus ultimately looked towards machine production as a vehicle for the democratisation of design, paving the way for the famous Bauhaus ‘style’ that today dominates discussions of the school.

“Yet at its heart,” says curator Roisin Inglesby, “the Bauhaus was not an aesthetic, but a school that captured a diverse range of ideas and influences. The exhibition will shed light on these lesser-known stories, inviting visitors to explore connections with Morris’s objects and the philosophy that inspired them.”

Alongside the exhibition will be a display of three pieces by acclaimed London-based fashion designer Mary Katrantzou, which combine Bauhaus prints with patterns inspired by William Morris. Artist in Residence Nicholas Pankhurst is creating two large Bauhaus-inspired works that will be on display at the Gallery and at the nearby Walthamstow Wetlands.

The William Morris Gallery has launched a crowdfunding campaign to raise funds for the exhibition on Art Fund’s Art Happens site. The Gallery hopes to raise £15,000, which will go towards conservation, transport and installation. 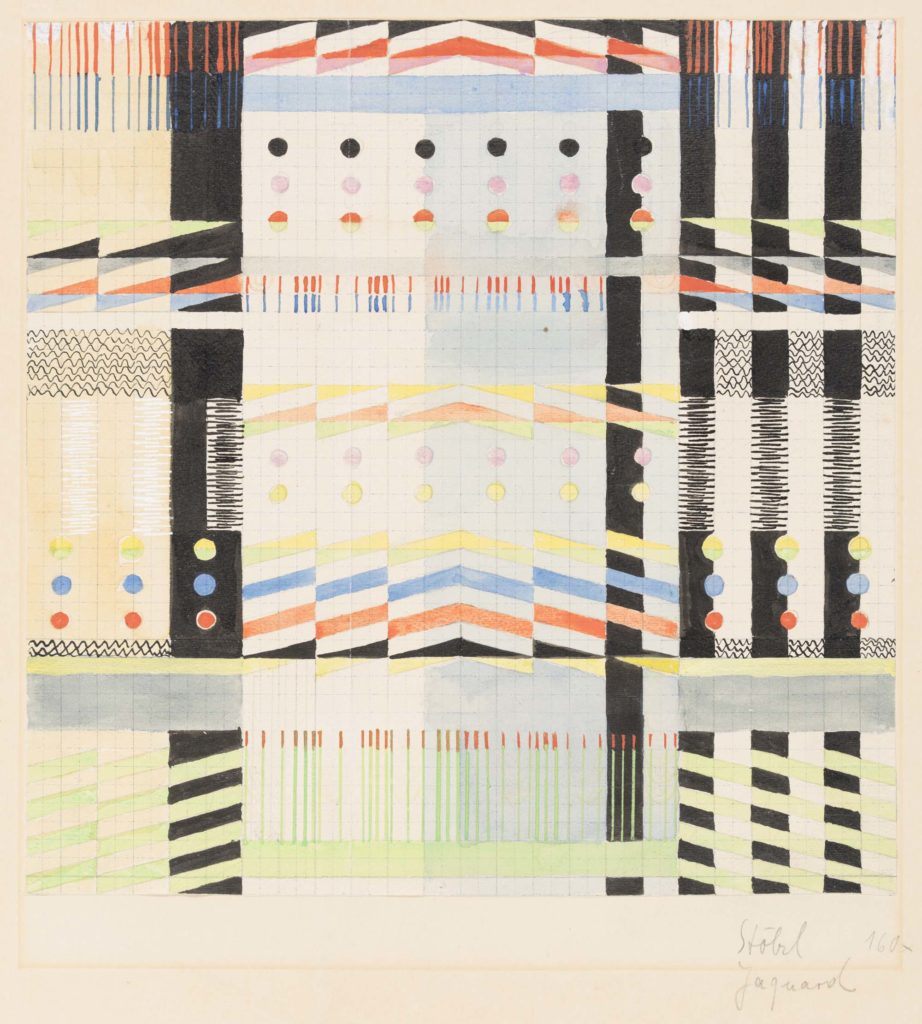