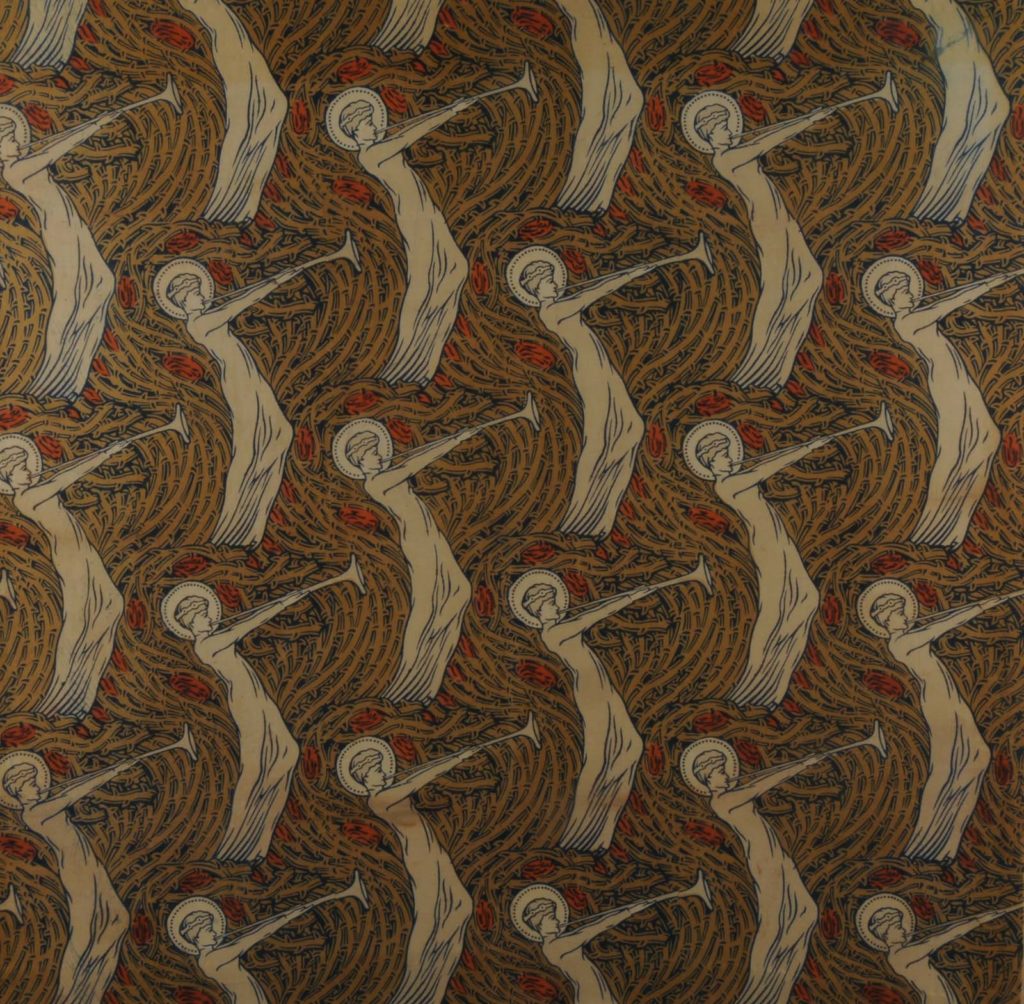 Founded in 1882, the Century Guild was a forum for designers and artisans to collaborate and sell work and, much like the Arts and Crafts Movement that it was part of, it spanned architecture, painting, furniture, sculpture, textiles, wallpaper and metalwork.

It was established by the architect and designer Arthur Heygate Mackmurdo (1851 – 1942), who later helped found the William Morris Gallery, and his assistant, Herbert Percy Horne (1864 – 1916), in close collaboration with designer Selwyn Image (1849 – 1930) and although other designers were attracted into their orbit, the three men remained their core members.

Together they aspired to elevate crafts to the status of art, integrate both art and crafts in domestic interiors, and democratise good design. Within The Reach of All: The Century Guild, is the first exhibition in 20 years to explore their pioneering aesthetics and lasting legacy.

The William Morris Gallery holds the world’s largest and most comprehensive collection of Century Guild works and the exhibition draws on this holding to explore not only the group’s key figures, but also how they influenced the development of Art Nouveau, 20th-century design and even modern arts publishing. 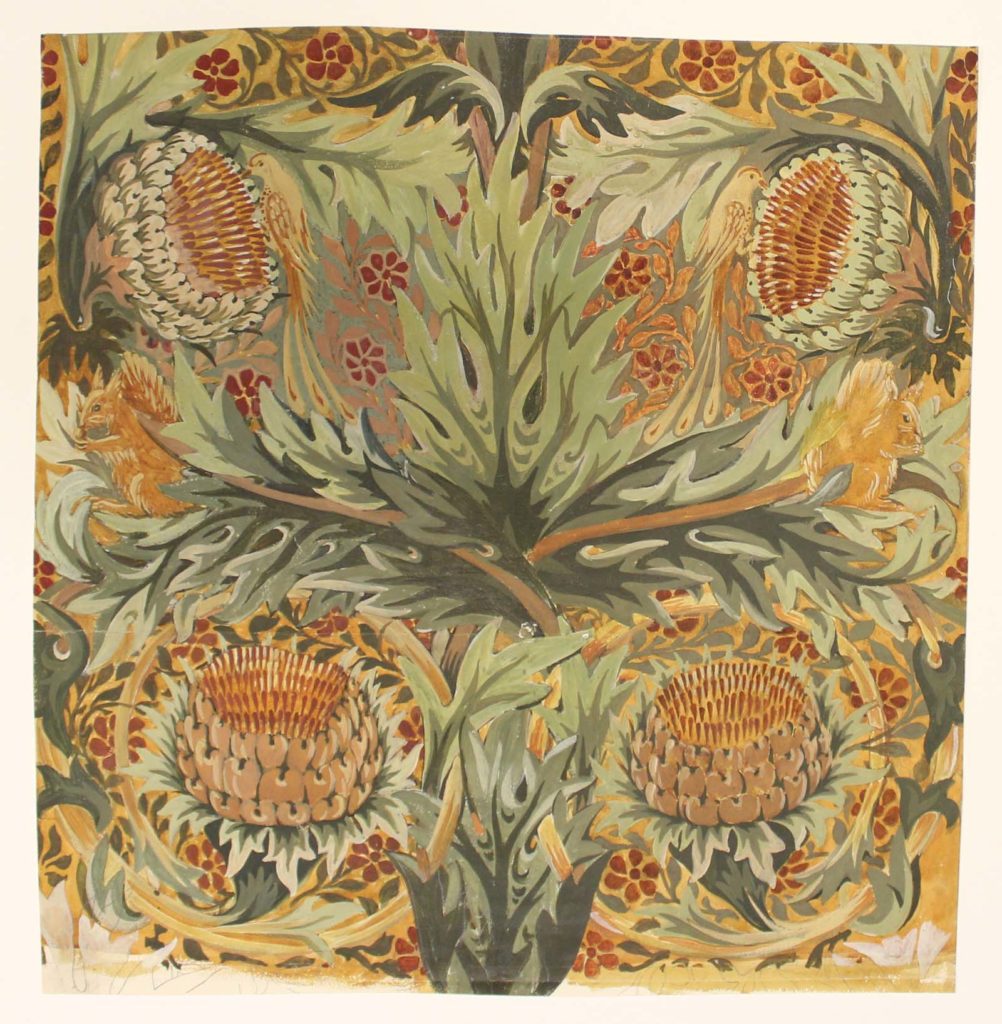 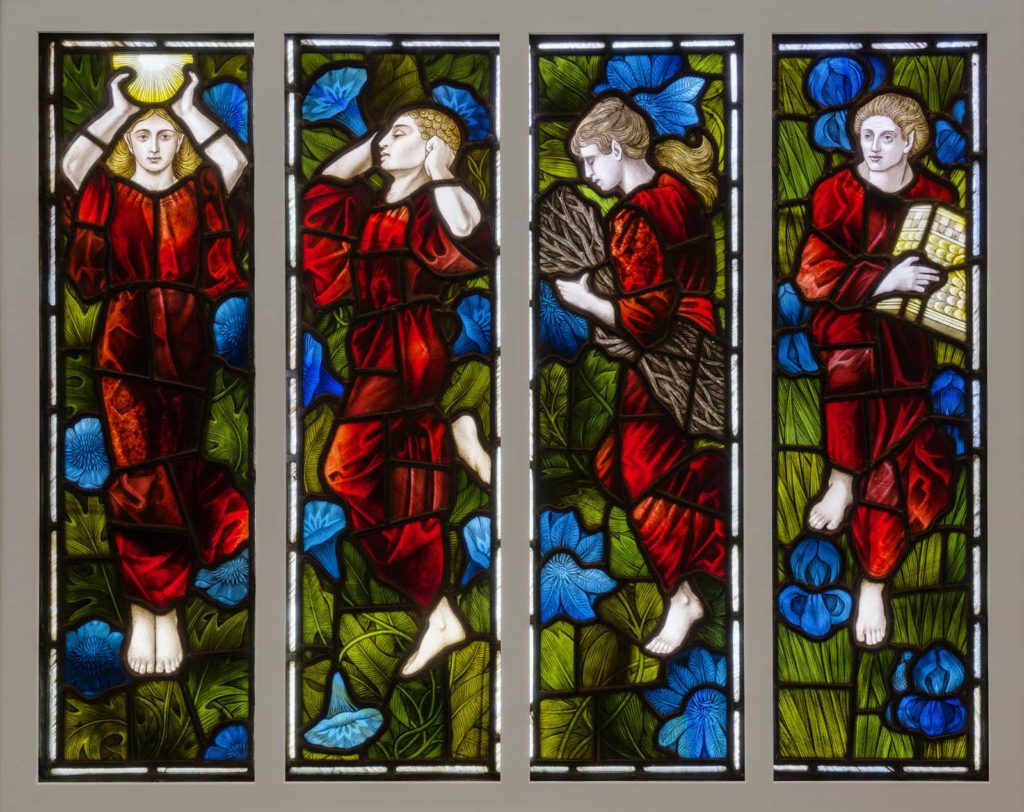 The latter was inspired by their innovative journal, the Century Guild Hobby Horse (1887 – 1892) which contributed to the popularisation of the British Arts and Crafts movement amongst a European audience, and perhaps more importantly, pioneered the integration of graphic art, design and illustration.

Readers of this aesthetic quarterly were treated to a sumptuous blend of graphic design and typography with accompanying sketches, plates, photographs, engravings, wood cuts, lithographs and reproduced paintings. There was also a wide range of topics beyond art and design, encompassing music and poetry, with contributions from revered contemporaries such as Edward Burne-Jones, May Morris, John Ruskin and Oscar Wilde.

Partly due to the success of Hobby Horse, the Guild’s designs and ideas became more widespread and influential, both in Britain and internationally, and Mackmurdo became one of the most significant figures in British design history. Today he is credited with popularising a number of innovative ideas with the British public, including community-focused architecture, modern interior design and building conservation.

With Morris as one of his associates, Mackmurdo and the Guild always followed a tradition of the revival of crafts, while simultaneously furthering the emphasis on aesthetics.

There are also similarities to be found in the way the Guild retained the social values and ideals set out by Morris and John Ruskin, and they also frequently incorporated motifs from the natural world into their designs, which evoked the sensation of nature but without directly imitating it. On display in the exhibition are wallpapers and textiles, intricately decorated with animals and flora such as peacocks, tulips and squirrels – one of Mackmurdo’s favourite motifs.

But the Century Guild also began to incorporate figures into their wallpaper and textile designs, which many see as foreshadowing the Art Nouveau movement. 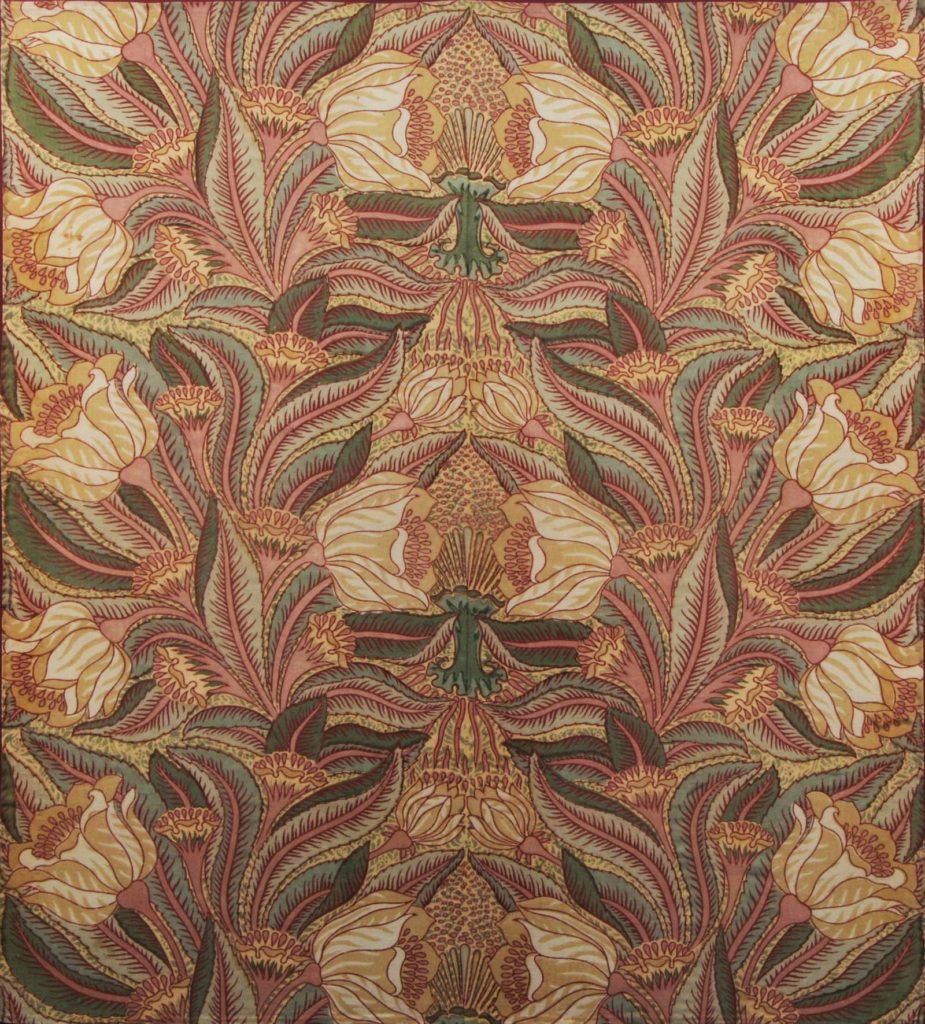 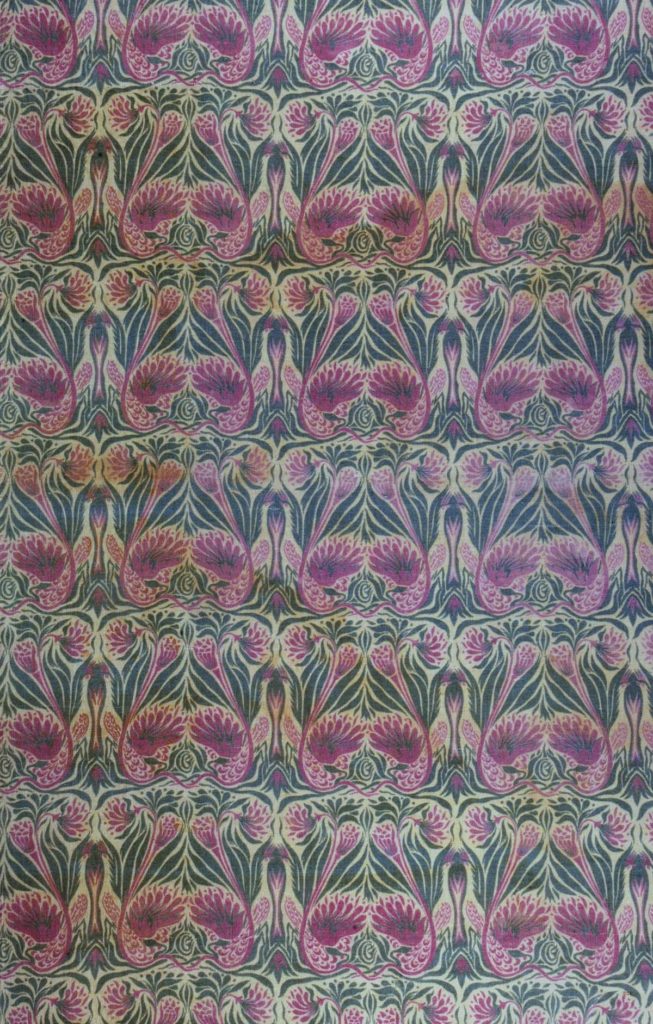 With a firm belief that all branches of art and design should be unified under the umbrella of architecture, Mackmurdo was also interested in the interplay between architectural structure and interior design, as demonstrated by the Guild’s decision to exhibit their projects as complete rooms.

This aesthetic harmony across media can be seen in the Guild’s furniture designs – most notably Mackmurdo’s mahogany chair (c.1882) which features wooden fretwork in organic twisting forms inspired by marine botany. Elsewhere their furniture favoured a simplicity of form that influenced their contemporaries Charles Rennie Mackintosh and Charles F.A. Voysey.

Also on display is a wooden settee (c.1886 – 87) created for Christian Socialist and anti-prudery campaigner Stewart Headlam, who helped pay Oscar Wilde’s bail during his first trial and later offered him his home as a refuge following his release from prison in 1897.

But it was their influence on the art and design that followed in their wake that marks them out as innovators – Mackmurdo’s architectural designs are even seen by some as early examples of Modernism, with function and usability integral elements of their design. This exhibition promises to remind us once again of their significance and how they were always more than just a fascinating part of the Arts and Crafts movement. 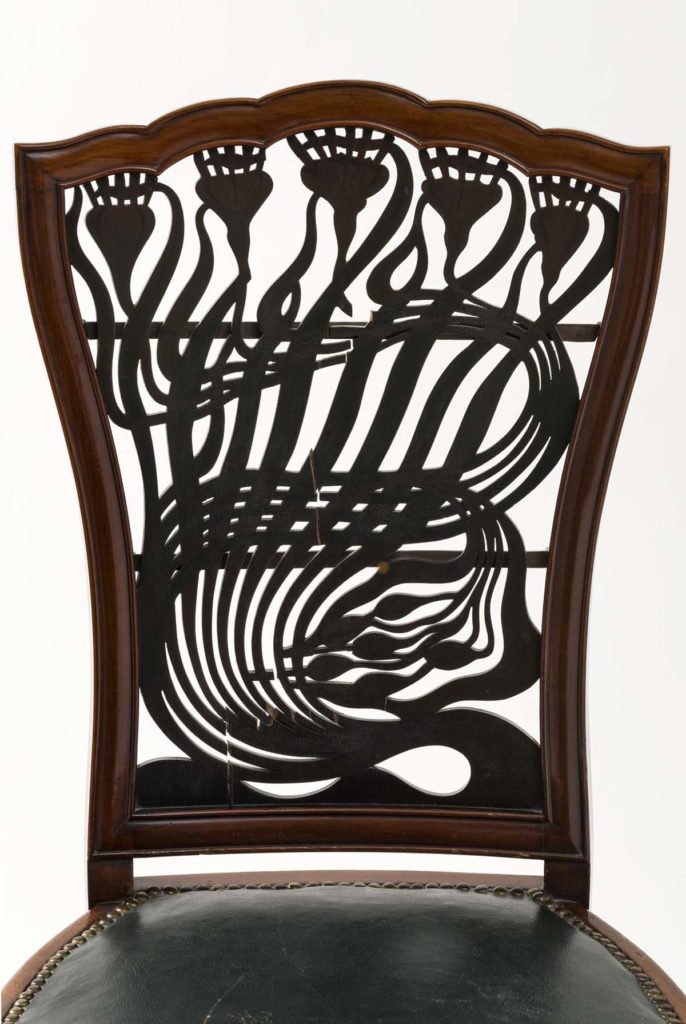 Within The Reach Of All: The Century Guild is at the William Morris Gallery from April 1 – 31 August 2021. Admission Free.

One comment on “William Morris Gallery celebrates the Century Guild”