From the end of the 18th century Poland underwent successive partitions dividing its territory between Russia, Austria and Prussia, resulting in the country disappearing from the map of Europe for 123 years. In the words of historian Norman Davies, Poland became “just an idea – a memory from the past or a hope for the future”.

Amidst this catastrophic decline the arts became a vital means to preserve an endangered cultural heritage while forging a new outward-looking identity.

The Young Poland (Młoda Polska) movement flourished between 1890 – 1918 in response to the country’s non-existence for almost a century and grew to vibrantly encompass the visual arts, literature, music and drama.

Many names that have since become bywords for Polish identity and creativity came to the fore in this period including the playwright, poet, painter and polymath Stanisław Wyspiański (1869 – 1907), painter Olga Boznańska, peasant poet Jan Kasprowicz and composers like Karol Szymanowski and Grzegorz Fitelberg.

However, to date little attention has been paid to the unprecedented rise and elevation in status of the applied and decorative arts and the revival of traditional crafts within this multi-faceted crusade to preserve Polish national identity. 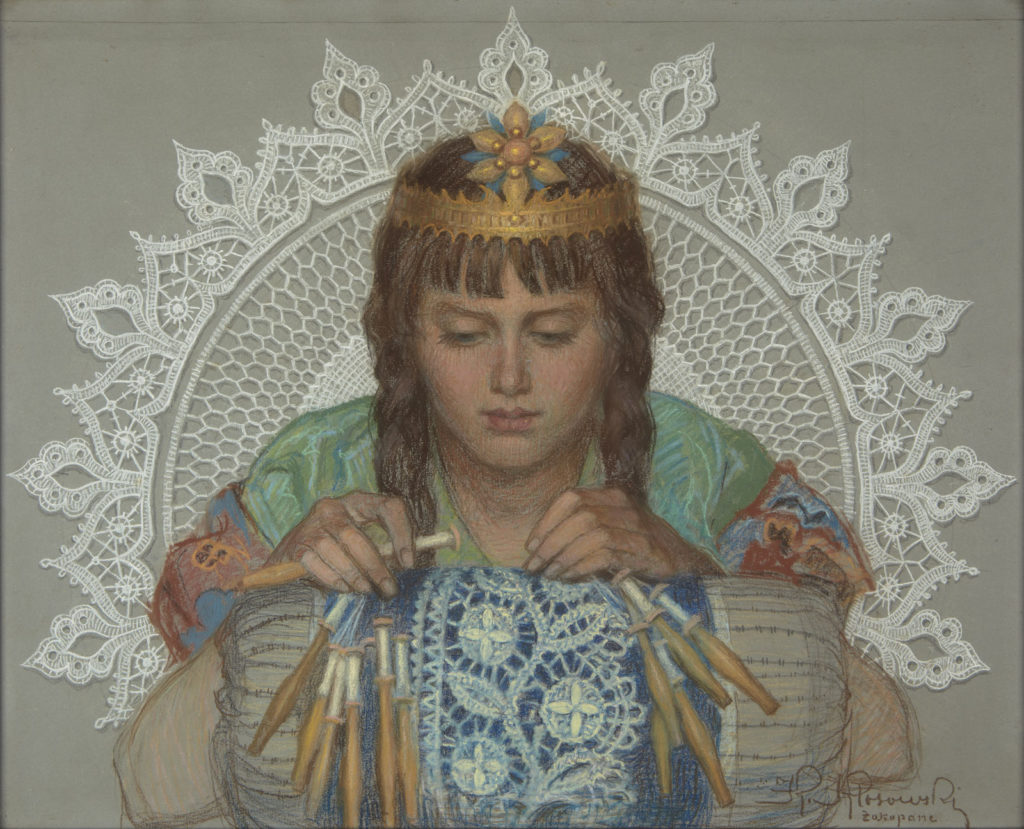 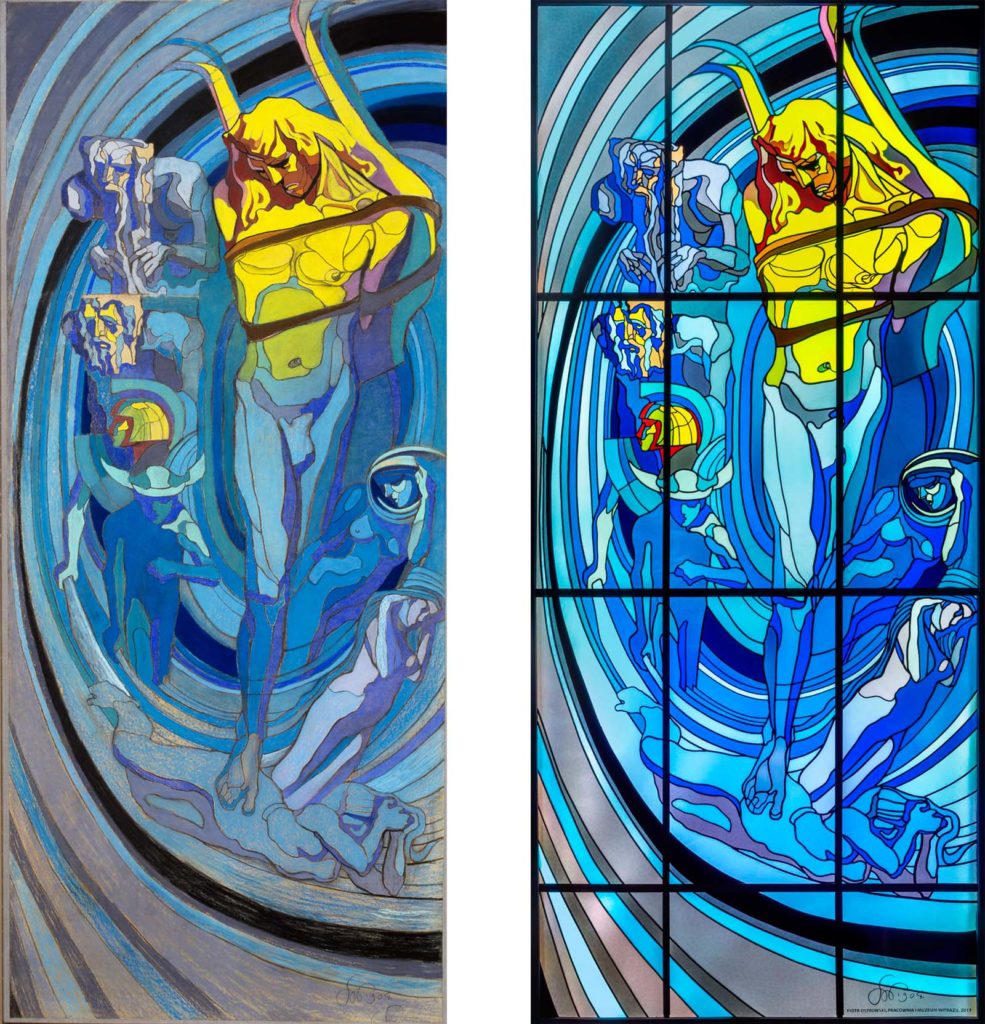 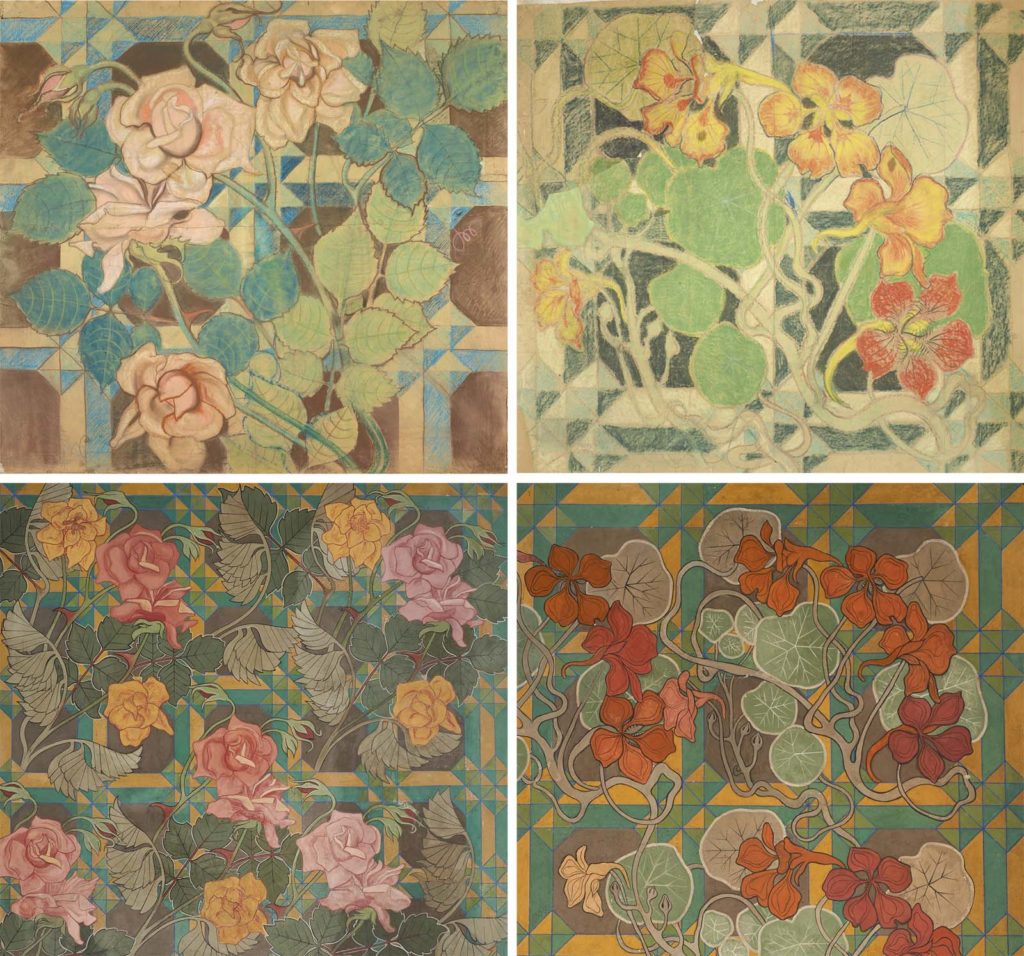 Stanisław Wyspiański. Detail of rose and nasturtium floral painted mural decoration in the chancel and transepts of the Franciscan Church: original designs in pastel on paper, and finished wall paintings. Image courtesy National Museum in Kraków and the Franciscan Church © NMK Photographic Department

At the William Morris Gallery they have been partnering with the National Museum in Kraków and the Polish Cultural Institute, London, for a major exhibition featuring a selection of works that naturally focus on the Arts and Crafts element of this flourishing artistic outpouring.

Spanning embroidered and woven textiles, furniture, stained glass, architectural models and drawings, woodcarvings, ceramics, paper cuttings, as well as paintings, illustrations and ideas, the exhibition is the first to position Young Poland as an Arts and Crafts movement.

The movement’s foremost figure was undoubtedly Wyspiański, who is often seen as the Polish counterpart to William Morris. And the two artists certainly shared a firm belief in the equality of fine and decorative arts.

Like Morris, Wyspiański boasted a prolific output that included decorative patterns, stage sets, textiles, furniture, stained glass, book arts and interior decoration – all of which are represented in the exhibition. And as befitted the age, the work of Wyspiański and his fellow Young Poland visual artists such as his collaborator and friend Józef Mehoffer, Henryk Uziembło and Wlastimil Hofman was heavily imbued with symbolism.

The paintings of Edward Burne-Jones were a major influence and inspired the imagery for Wyspiański’s stained-glass window Apollo: Copernicus’s Solar System (1905), which today seems to presage not just fine siècle symbolism but also the graphic novel and anime stylings of a century later. Alongside the original designs is craftsman Piotr Ostrowski’s contemporary recreation of the original glass window, which was destroyed during World War Two inside the Medical Society building in Kraków.

Kraków may have been the creative epicentre of Young Poland, but the movement also gave rise to the Zakopane Style of architecture and interior decoration, based on local construction, carving and embroidery traditions from the Tatra Mountains.

Stanisław Witkiewicz (1851 – 1915) was the style’s founder and main proponent, and examples of his work include his design for Koliba Villa (1892) as well as the architectural model of the most famous building created in the style, House under the Firs (1899), made for the 1900 Exposition Universelle in Paris to promote the Zakopane Style abroad.

While the Zakopane Style was developed before Witkiewicz became aware of John Ruskin and William Morris, he later said that his work had unknowingly fulfilled the theories of these British reformers. 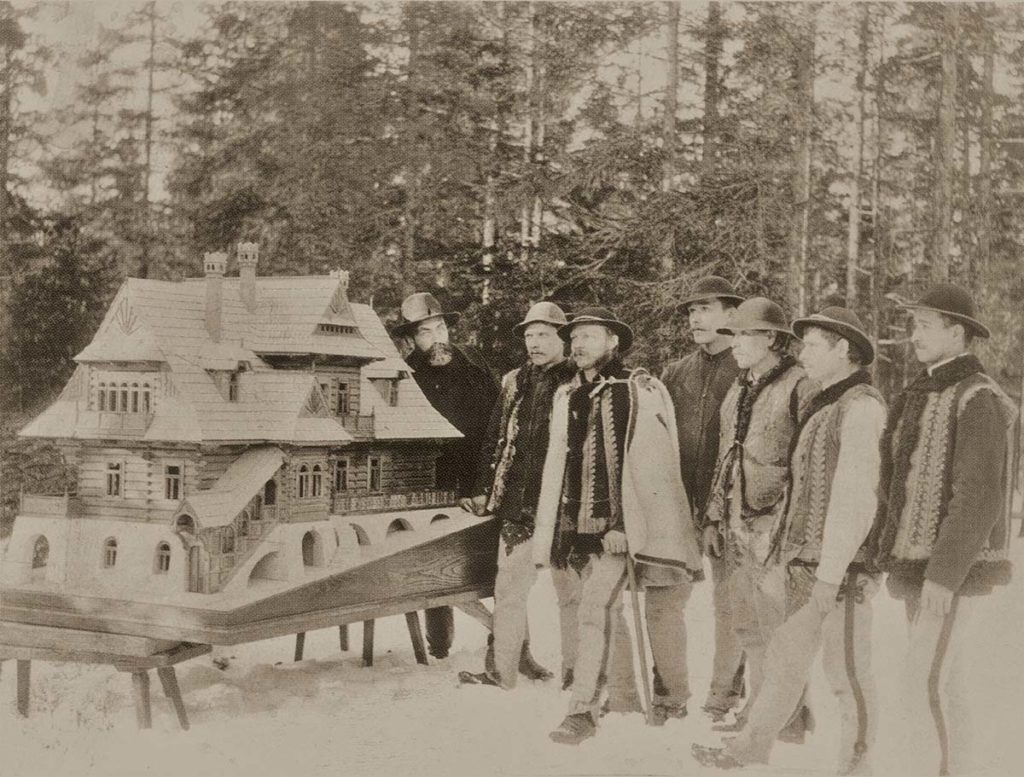 Photograph of Stanisław Witkiewicz (far left) and the makers of the House Under the Firs architectural model (1899). Image courtesy Tatra Museum 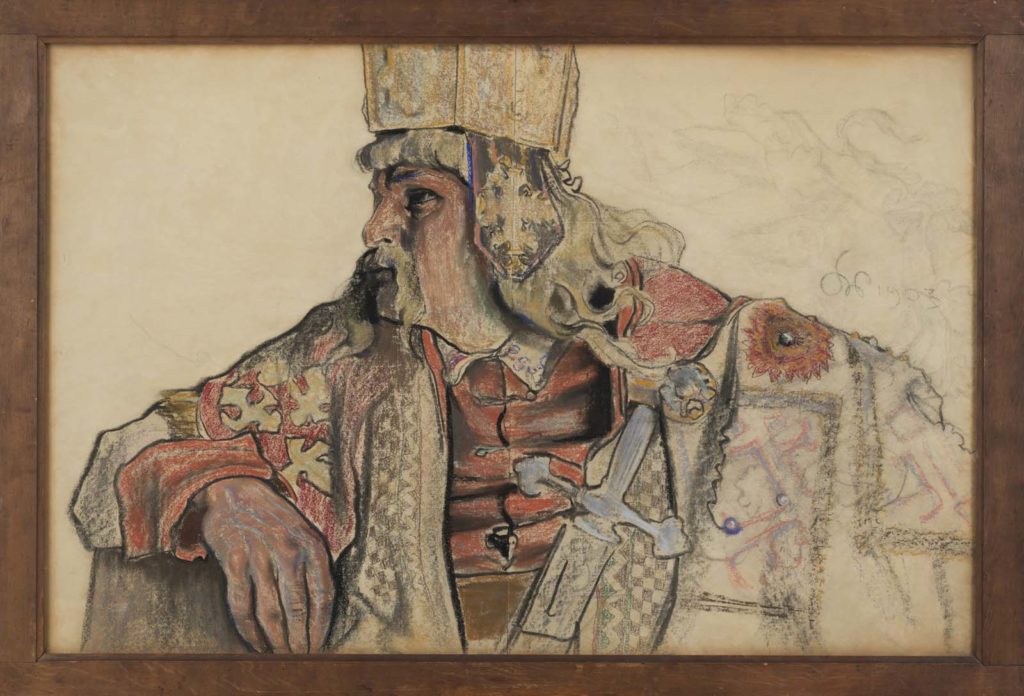 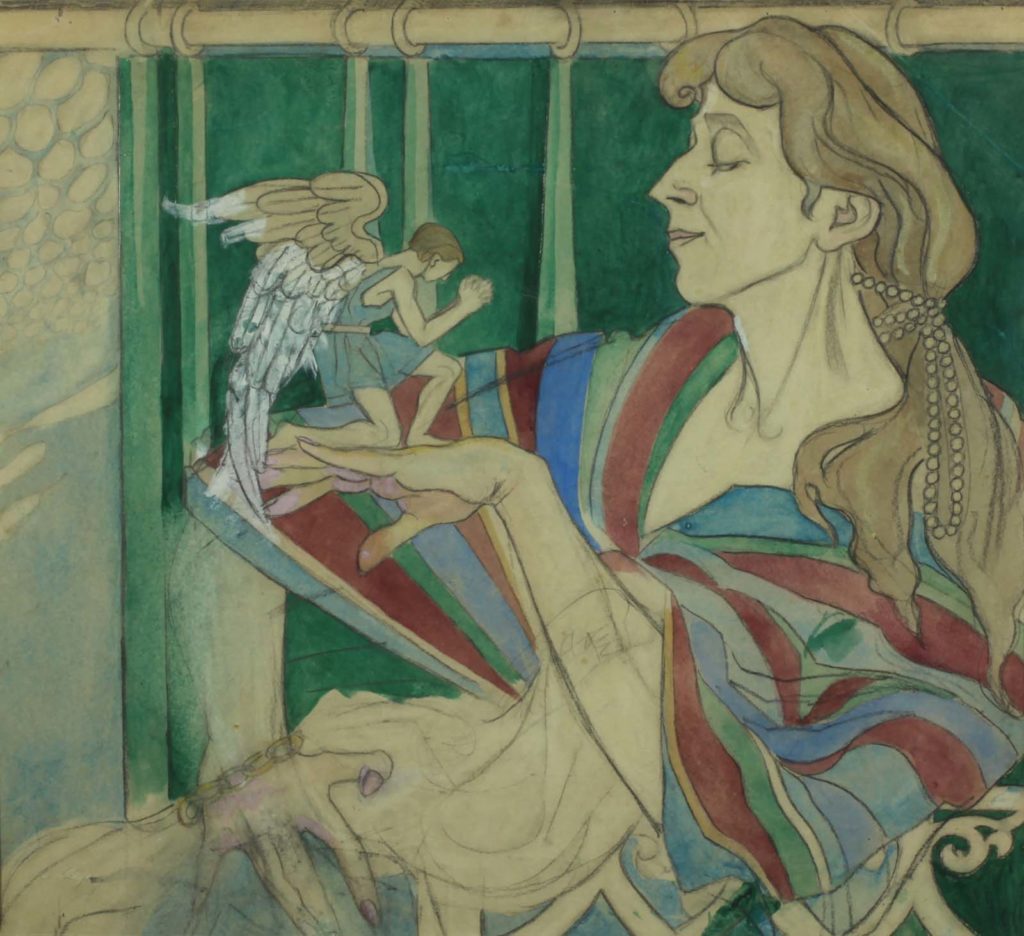 The work of another significant Zakopane-based artist introduces the man who was arguably the last proponent of the Young Poland aesthetic; artist Karol Kłosowski (1882 – 1971). A prolific sculptor and woodcarver, painter, textile and furniture designer and paper cutter he was also the creator of Zakopane’s Silent Villa (Willa Cicha), which he conceived as a total work of art – meticulously hand crafting every element of the villa over the course of 20 years.

On view here are his ornamental lace designs and paper cuttings (c.1908 – 1925) featuring squirrels, cockerels and grasshoppers, as well as his kilim wall hanging Highlander Highwaymen (after c.1910).

Visitors will also encounter the wondrous yet somehow overlooked paintings and illustrations of Maria Pawlikowska- Jasnorzewska (1891 – 1945) who is best known for her plays and the lyrical poetry for which she was dubbed the Polish Sappho.

Her bold and intimate watercolours feature fantastical and macabre elements inspired by gender dynamics and Polish folk traditions such as Fairytale (1914) and Jan Pawlikowski in a Cosmic Setting (c.1918) which is a portrait of her second husband forming part of a series depicting him amongst planets on a cosmic scale. Her Self-Portrait with an Elf (c.1920) is a portrait of the artist towering over her husband.

The exhibition closes by looking at works produced by the Kraków Workshops (1913 – 1926), a commercial cooperative of architects, craftsmen and artisans who sought to synthesise traditional craft with modern techniques. The group were influenced by the writings of Włodzimierz Konieczny who argued that there was no art other than that which was necessary, echoing Morris’s own maxim that ‘nothing can be a work of art which is not useful’.

They produced everything from interior furnishings to entire outfits including shawls and headscarves. On display are ornate leather book bindings and children’s toys designed by Zofia Stryjeńska (1918) and the strangely familiar swirling floral designs printed in batik including Norbert Okołowicz’s silk scarf (1913).

The art and artists of the Young Poland movement may be relatively unknown to British audiences, but as visitors to this exhibition will discover, the parallels to the British Arts and Crafts movement and the ideals of William Morris are unmissable. 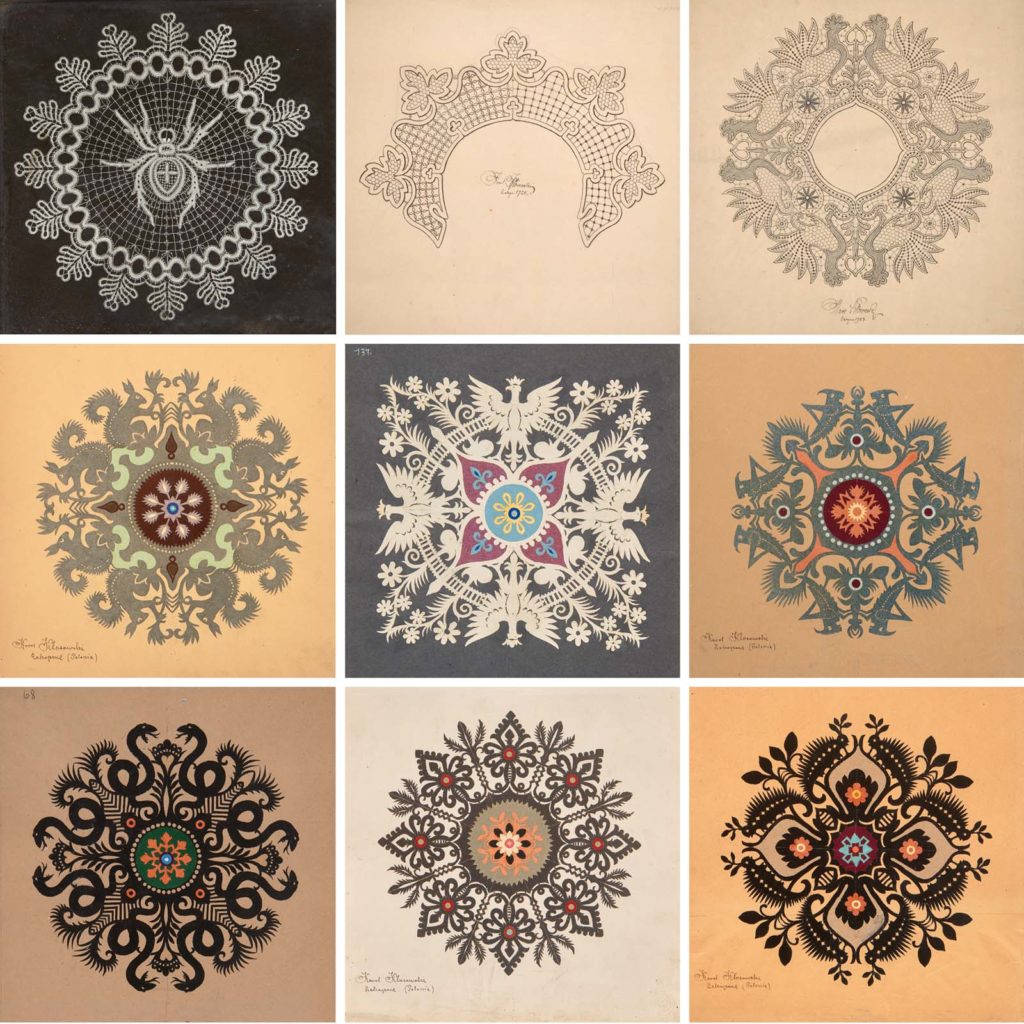 Explore the exhibition online at www.youngpolandartsandcrafts.org.uk