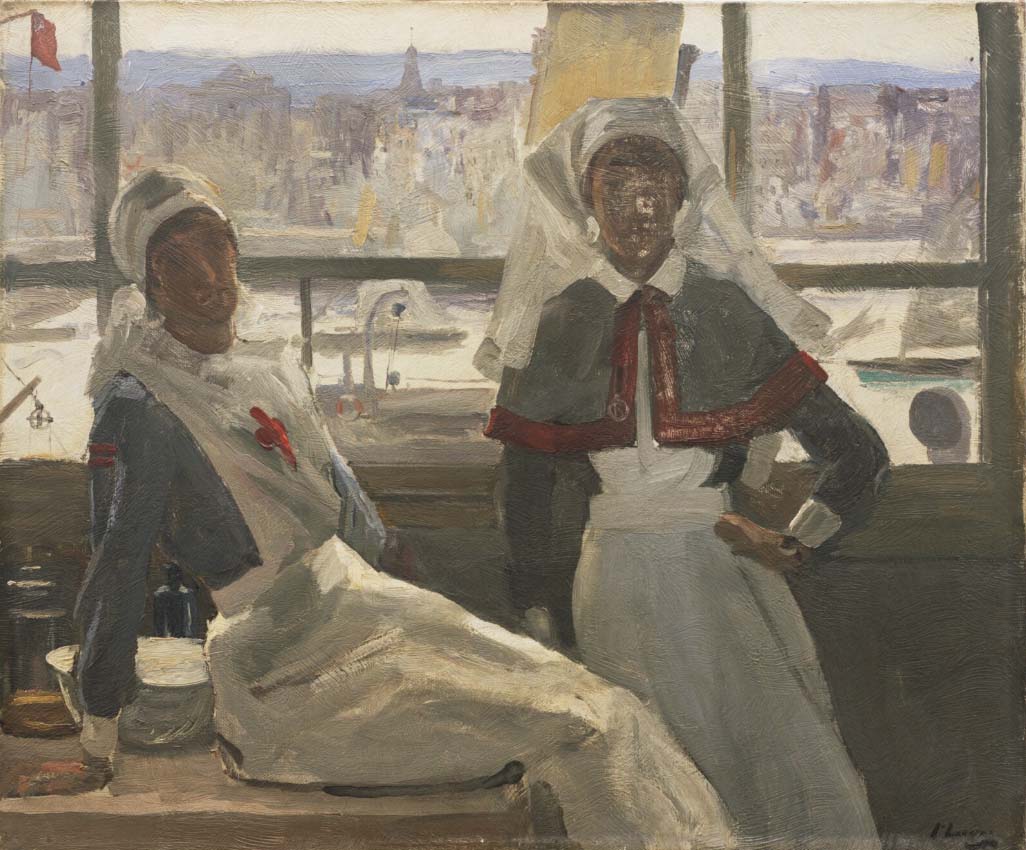 The Imperial War Museum is marking the final year of the centenary of the end of the First World War in 1918 – and the year that saw some women finally granted the vote in Britain – with a timely exploration of women’s working lives during the First World War.

WomensWork100 is a series of partnerships, public events, film screenings and a vibrant public-facing digital programme that takes its name from the museum’s Women’s Work Collection, the creation of which is closely linked with the establishment of IWM itself in 1917.

Almost immediately after the museum’s creation, plans were put in place to ensure the role of women would be recognised and recorded. Against a backdrop of the campaign for female suffrage, the IWM formed the Women’s Work Sub-Committee and tasked it with collecting material that recorded women working in new roles.

Today the vast collection they amassed comprises an unparalleled assemblage of art, models, documents, uniforms, badges, books, photographs and all kinds of memorabilia reflecting the breadth of women’s roles in every type of wartime activity or experience.

“The Women’s Work Sub-committee’s wanted to create a museum that would be a place of record and a memorial to all the different types of work and activities that had gone on during the war,” says IWM Librarian and Women’s Work Collection Specialist, Sarah Paterson. “The work that women had done was such a major change and an innovation – the war effort couldn’t really have been successfully completed without them, so the committee’s role was to document, record and collect examples of all the different activities that women had been involved with.” 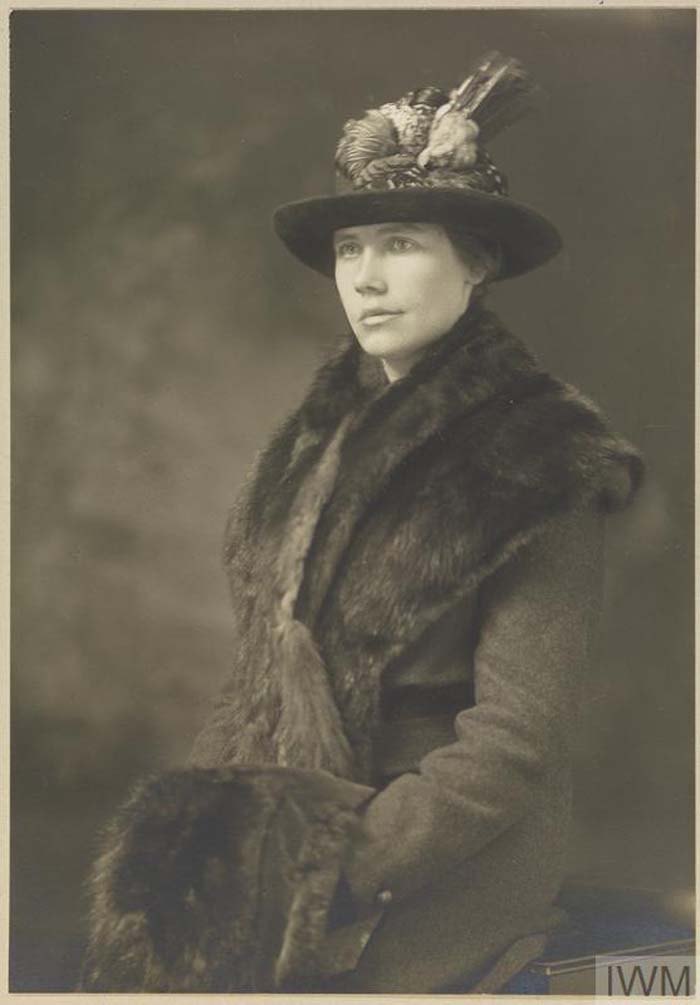 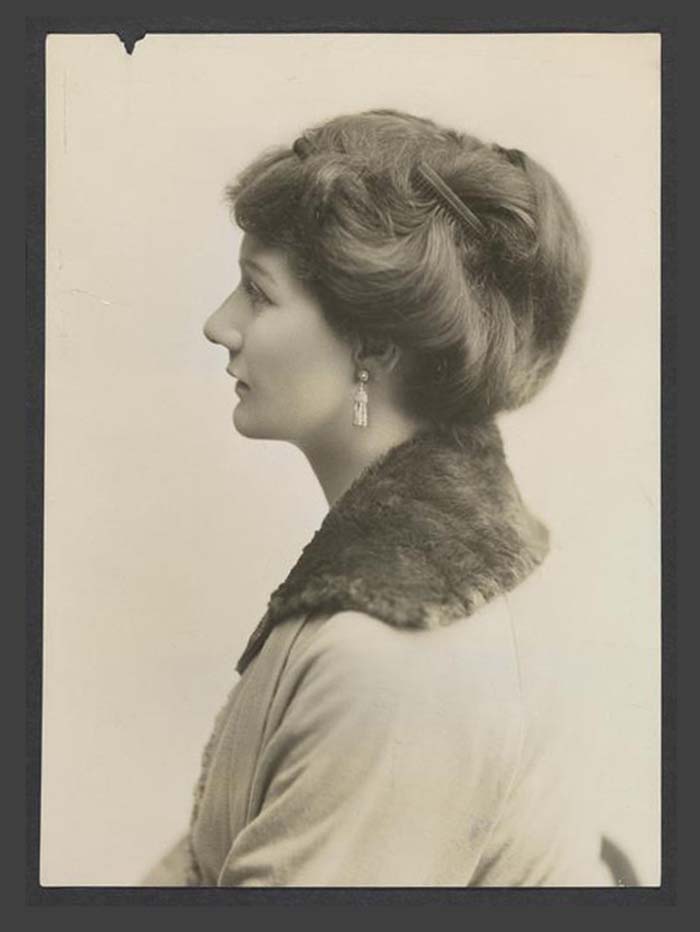 On April 4 1917, Agnes Ethel Conway, the 34-year-old daughter of Sir Martin Conway, IWM’s first Director-General, was invited to join the newly set up Committee as its honorary secretary. Conway had worked with wounded Belgian soldiers from the start of the war and she was joined by chairman Lady Priscilla Norman who with her husband had also taken a hospital out to France in the autumn of 1914.

They began their task of collecting and recording at “the peak of women’s work during the war,” says Paterson. “When we think about the First World War we often think about it as all of one piece. But if we’d been living through it we wouldn’t have seen it like that.

“In 1914 women were very much working in a domestic nurturing role, and there’s lots of charitable fund-raising going on and lots of nursing. But as the war progresses and as more men go off to the Front, there’s an ever increasing demand for manpower, women are having to step into some of the roles that men are undertaking and in 1915 they really start working in munitions factories in a big way, which is concentrated when conscription comes in, in 1916.

“Then in March 1917 with the creation of the Women’s Army Auxiliary Corps, we’ve actually got women starting to serve with the armed forces. Women go off to France in uniform for the first time, which was a major development in the role of women serving in the War and the first time the government was mass-producing a uniform and issuing it to women.”

One of the first tasks the Women’s Work Sub-committee undertook was a search for uniforms and 69 examples were acquired during the initial period of collecting. The variety and quality of these demonstrated the more exclusive origins of the women’s war effort at the start of the war, but later examples included clothing produced on an industrial scale. 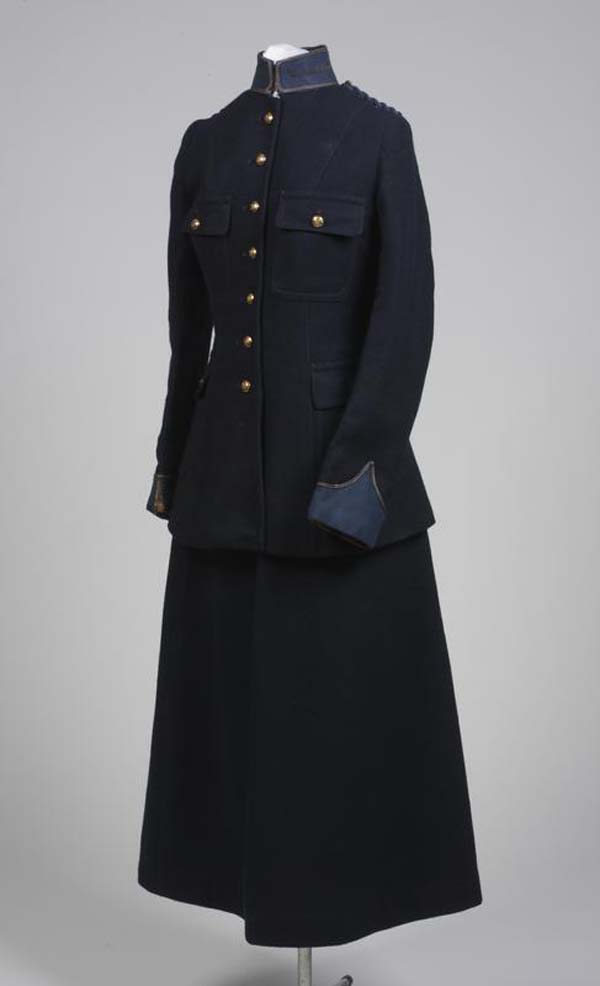 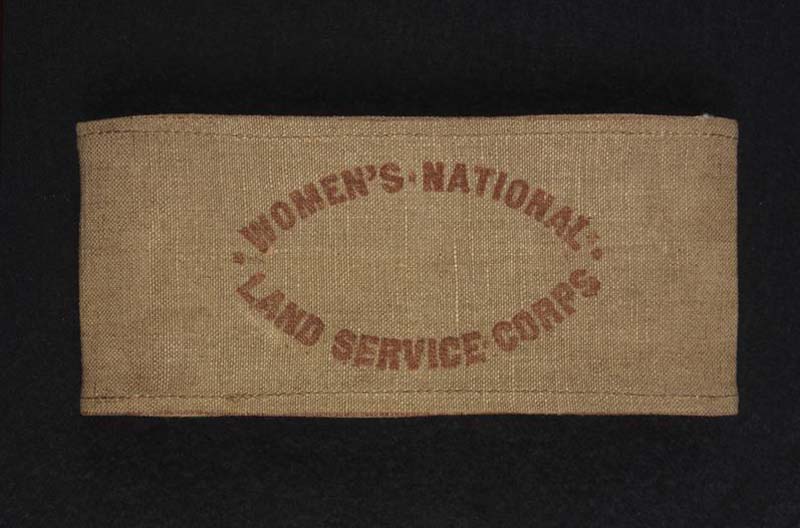 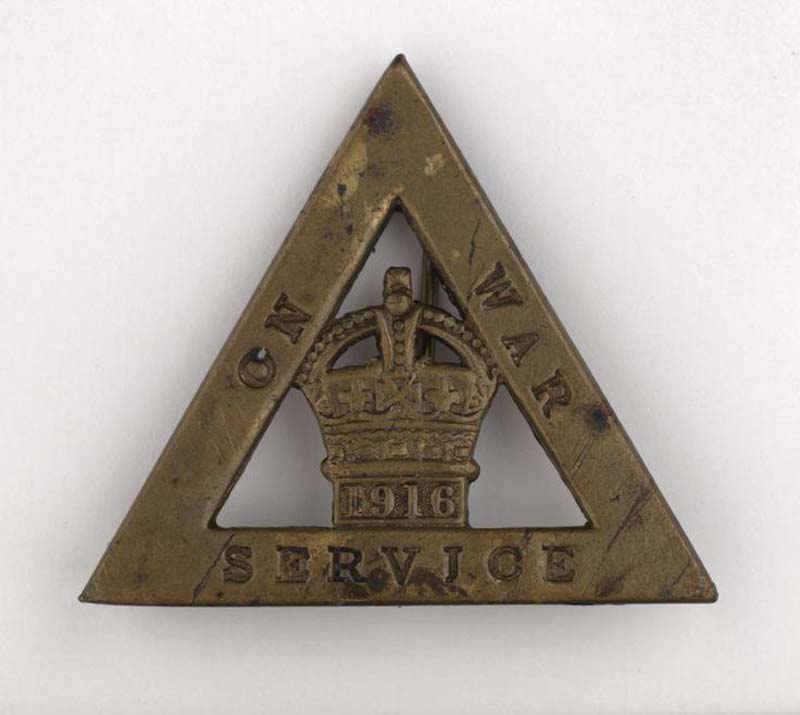 “Many of the women’s uniforms were initially worn by upper and middle class women, who formed their own organisations to assist the war effort in a voluntary way,” says Paterson. “Some of them would have been produced in very small numbers, but if you were walking down the street between 1914 and 1918 you would see people dressed in all manner of outfits that showed exactly what they were doing for the war effort. They were a visual shorthand for what was going on.

“We also had the thousands of ‘munitionettes’ in munitions factories who were dressed in protective clothing, which wasn’t a uniform as such, but they became instantly recognisable.”

Badges were also something that helped identify the roles women – and men – were undertaking during the war, and the collection includes many examples of the badges that proliferated. One of the most ubiquitous was the On-War Service triangular badge, which was worn by women.

“If a woman was working in a munitions factory, she changed into her munitions outfit when she went into the changing house. When she left the factory at the end of the day she would be in her own civilian clothes again and there would be nothing — apart from perhaps a slightly yellow complexion — to mark her out and show what she had been doing. The triangular On-War Service badge was issued so that people could instantly see that they’re doing their bit for the war effort.”

As well as uniforms and badges, the Committee was keen to acquire images of women working in their various roles and they appointed Victoria Monkhouse, the first British female Official War Artist, to begin drawing women in substitution labour roles in 1918. The society painter, Sir John Lavery, was also persuaded to take part (for half of his normal fee) and he set to work on a series of paintings of women at work – both at home and overseas.

Norfolk woman Olive Edis, a member of the Royal Photographic Society, was then commissioned in October 1918 to take photographs of women in France and Belgium and her pioneering work offers a fascinating insight into the role of women working and serving in France and Belgium, but the collection also contains a moving archive of photographs of women who died during the war and also women who were decorated. 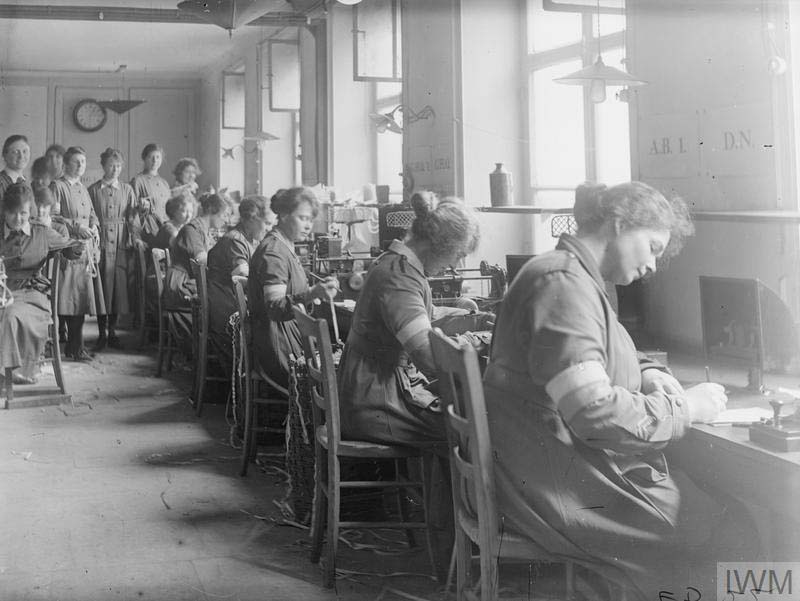 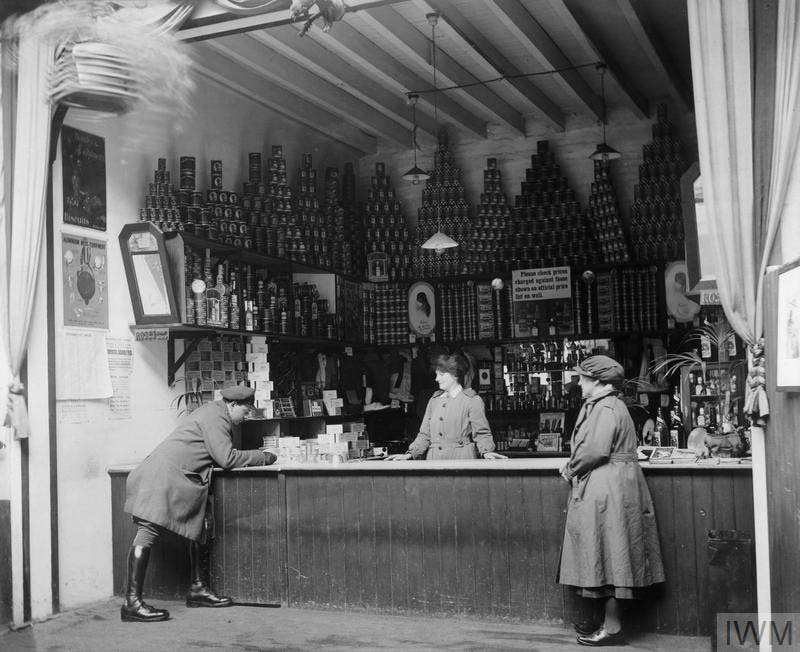 Olive Edis, The well stocked shelves of the Officers Expeditionary Force Canteen in Le Havre with a member of the Queen Mary’s Army Auxiliary Corps (QMAAC) behind the counter and another colleague and a young lieutenant in front. © IWM (Q 8106)

Many of the latter have been digitised and shared via Lives of the First World War, the IWM’s innovative crowd sourcing website allowing members of the public to add their own images, share their family stories, find records and add known facts about the eight million people who served during the conflict.

Other items include examples of the many books and pamphlets that were produced by organisations and the government. By 1918 legislation including the Defence of the Realm Act was setting out guidelines for the well-being of women who are working in dangerous factory environments and it drove an abundance of books and pamphlets.

There is also a sizeable collection of ephemera relating to the various roles of women from the period.

“One of the things I really like is a collecting box for the Scottish Women’s Hospitals,” says Paterson. “I think we tend to forget just how instrumental women would have been in charitable fundraising right from the start of the First World War.”

The Scottish Women’s Hospitals were staffed entirely by women; women doctors, women administrators, women surgeons, women orderlies and nurses. Many of them were suffragists and Dr Elsie Inglis, the doctor who lead the programme and who was the face of Scottish Women’s Hospitals, offered her services to the War Office in 1914, She was famously told: “my good woman, go home and sit still.”

“Interestingly if she had offered her services in 1916, I think the reaction would have been very different because they hadn’t appreciated what the demand for man and woman power was going to be,” adds Paterson, but she didn’t go home and sit still, what she did was offer her services to the Allies who bit her hand off. A Scottish Women’s Hospital was set up in Royaumont in the autumn of 1914 for the French, and then the Serbians also asked for help, and the Scottish Women’s Hospitals duly obliged.”

The fragile old cardboard collecting box, which is on display in the IWM’s First World War galleries, reminds us that Scottish Women’s Hospitals were entirely funded by voluntary donations at home in Britain. 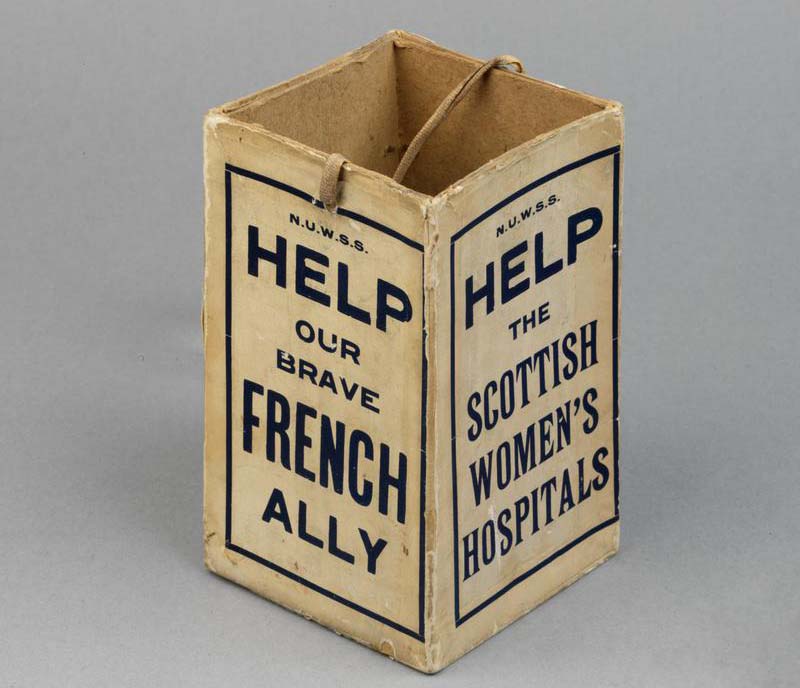 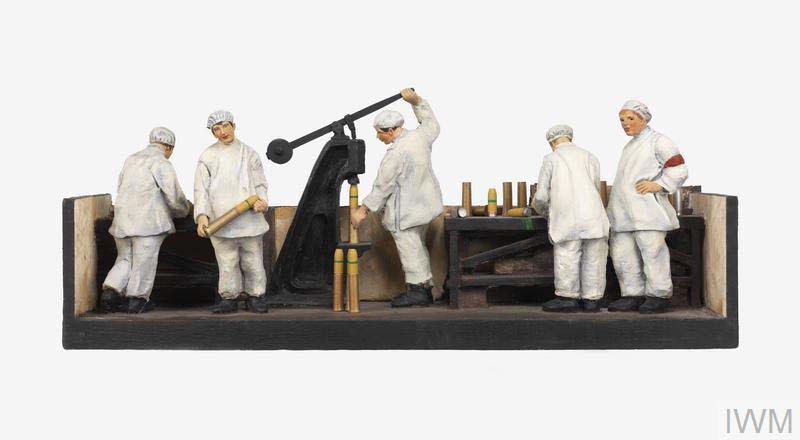 Diorama of women munition workers at the Shell and Cartridge Factory, Hayes, was made by Mrs Meredith Williams in May 1919. The model was subsequently badly damaged during the Second World War, being repaired in 1952. © IWM (MOD 158) 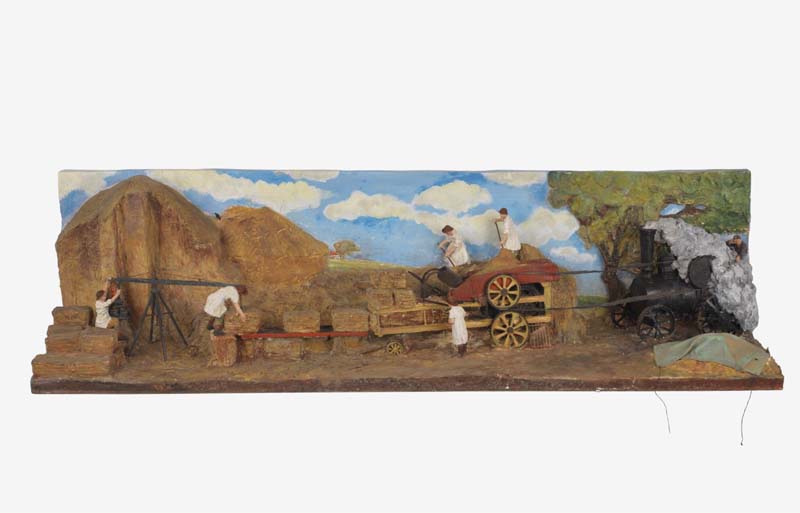 Hay Baling Industrial Workers of the Women’s Forage Corps, RASC, numbering approximately 6,500 substituted soldiers 1915-1919 in all classes of work connected with the distribution of forage to the Army. Made by Mrs Meredith Williams in May 1919. © IWM (MOD 53).

One of the most intriguing and sadly overlooked set of objects in the collection resulted from the Women’s Work Sub-committee’s desire to find new and innovative ways of showing the vitally important work women were doing, which they did by commissioning a series of detailed, three dimensional scale models.

“They took an enormous amount of time and trouble thinking about which scenarios they were going to use,” says Paterson of these fascinating female dioramas. “I like to think of them as a sort of digital media of the 1920s – because they are showing the work in a three dimensional, colourful way that you don’t get from photographs.”

Twenty five of the models were eventually produced covering everything from timber felling, hay bailing, the stacking of tank chains and filling artillery shells to female surgeons in field operating theatres, concert parties, X-ray ambulance drivers and even a woman leading a blinded soldier from St Dunstan’s Hospital.

“They might look rather charmingly old-fashioned,” adds Paterson, “but they were definitely cutting edge at the time. They were regarded as being really important in getting across the story of the role of women during the war.”

And in November 1918, when the war came to a dramatic halt, such visual records were vital. “The committee were collecting very much to have a record of what women have been doing because very suddenly it all came to an end and women are going back into their box again – they’re expected to resume their normal domestic roles.”

The role of women and the story of their working lives in the First World War is now accepted as a pivotal event in the long journey towards female suffrage – and more active roles for women in the larger economic, cultural, and political life of Britain and the rest of the world. That struggle may continue but the Women’s Work Collection is one of the best ways of understanding it.

Find out more about the Women’s Work Programme including events, exhibitions and resources at www.1914.org/womenswork100/

The Women’s Work Collection is now digitised and can be looked at free of charge in IWM London in the Explore History Centre or by appointment in the Research Room. Many of the items acquired by the Women’s Work Sub-Committee, such as photographs, paintings and uniforms are now dispersed throughout IWM’s collections.

IWM is marking the centenary of the First World War by leading a four year programme of cultural activities across the world. For more information visit www.1914.org

IWM London tells the stories of those whose lives have been shaped by war through the depth, breadth and impact of our Galleries, displays and events. Explore the First World War Galleries and iconic Atrium; find out what life was like at home during the Second World War in A…