During 450 missions flown out of Duxford, 128 pilots of the 78th were killed.

Huie was one of the lucky ones; he survived the war whilst amassing more than 200 hours of combat flying, during which he destroyed five and a half aircraft and flew 61 missions.

But like his colleagues, the margin between life and death was slim. On his very first mission (December 29 1944) in his first aircraft, Etta Jeanne, he narrowly escaped death when an engine fire forced a bail out into the frigid waters of the North Sea. He was rescued after another aircraft pilot spotted him in the water.

A doctor later told him that had he been in the water for five minutes longer, he would have died.

The deeds of the airman, who is now 90 years old, are being marked as IWM Duxford unveils its newly restored P-51 Mustang fighter in the paint scheme and livery of Huie’s second plane the Etta Jane II. Both of Huie’s P-51 Mustangs were named after his younger sister. 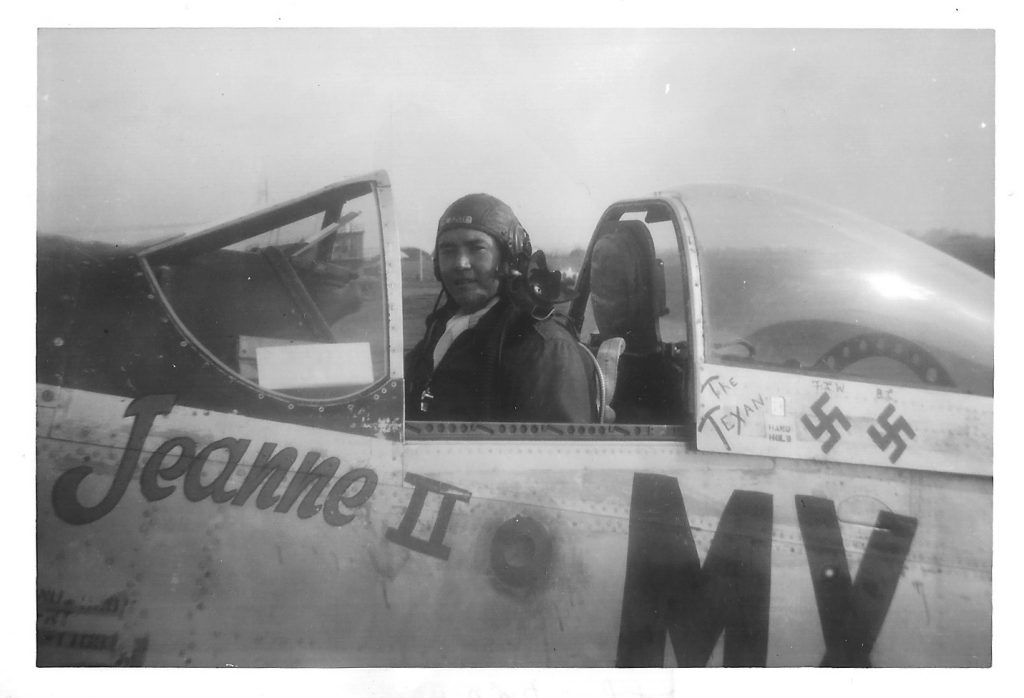 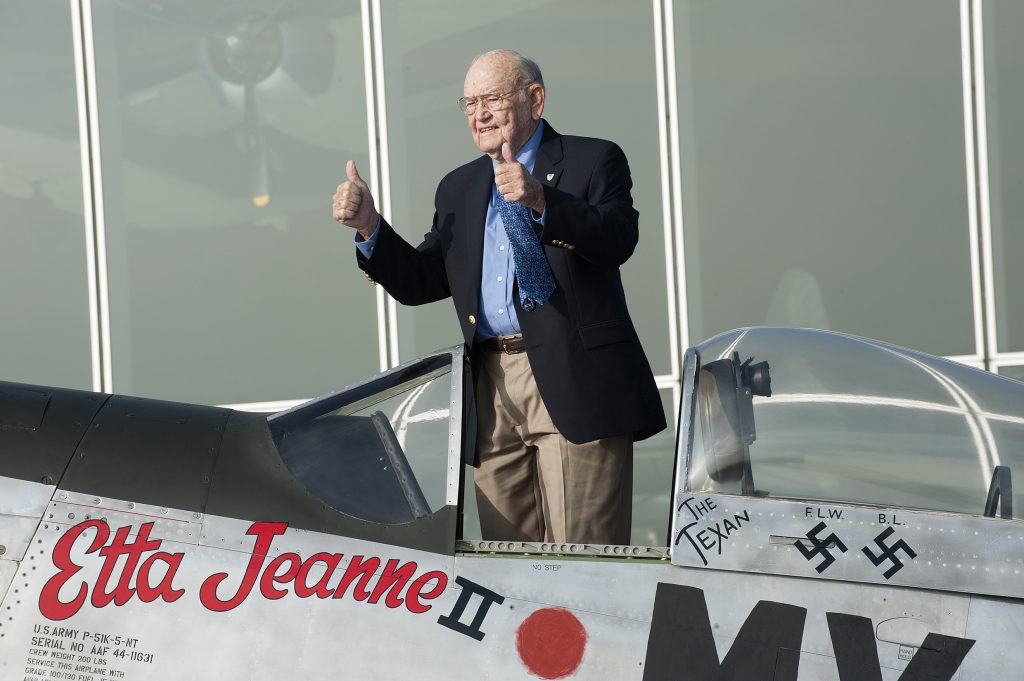 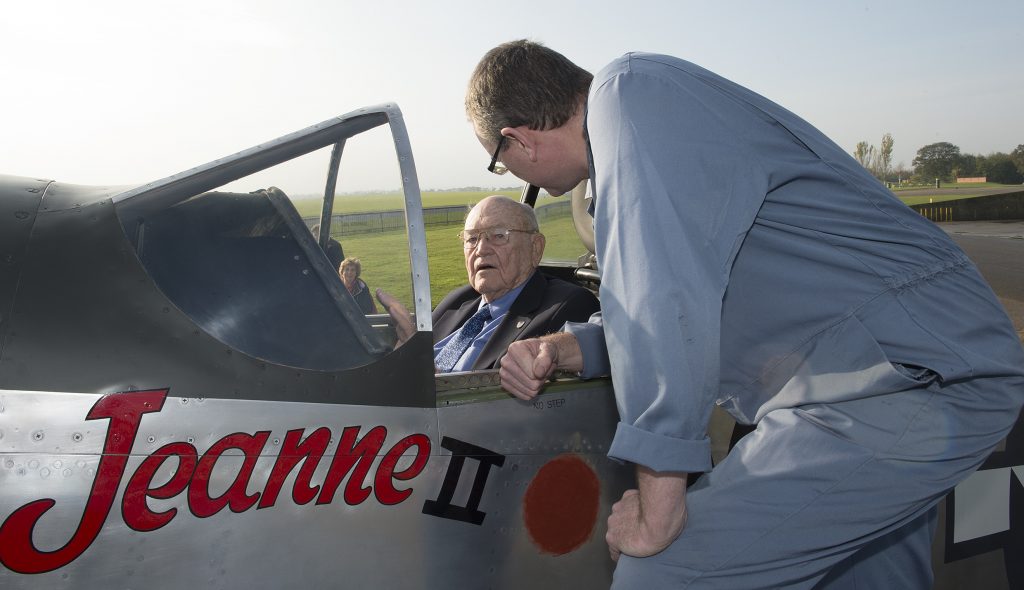 Huie caught up with the conservation team at IWM Duxford. Copyright IWM

Last week Huie made the trip to the museum for the unveiling of the fighter – the oldest preserved P-51 in the world – and to meet the IWM team behind its conservation.

“I never thought I would get to see this – it is heartwarming,” said the veteran, describing their work as “amazing” and “unbelievable”,

“When I think of all the hard work that has happened to put it in the condition it’s in, it’s amazing. I never dreamt I’d see it.”

A regular visitor to IWM Duxford, his old wartime base, Huie added: “I always enjoy coming back…I particularly enjoy visiting the Officers’ Mess, I have a lot of fond memories of being there. We had a guy who played the piano at night and we did some singing. We weren’t very good singers!

“I enjoy visiting the squadron facilities, where, when we weren’t flying, we’d read tech orders or play cards. Our squadron was based right next to the briefing room, it was a good feeling to go there again.”

The P-51 Mustang will form the centrepiece for Huie’s story, told as part of the new interpretation in the American Air Museum, when it reopens in 2016.

Having received the Mustang following the redevelopment of IWM London – where it had been painted, lacquered and suspended from the main atrium – the conservation team at Duxford carefully stripped back the aircraft, conserved it and painted it authentically to show it as it would have been during wartime. 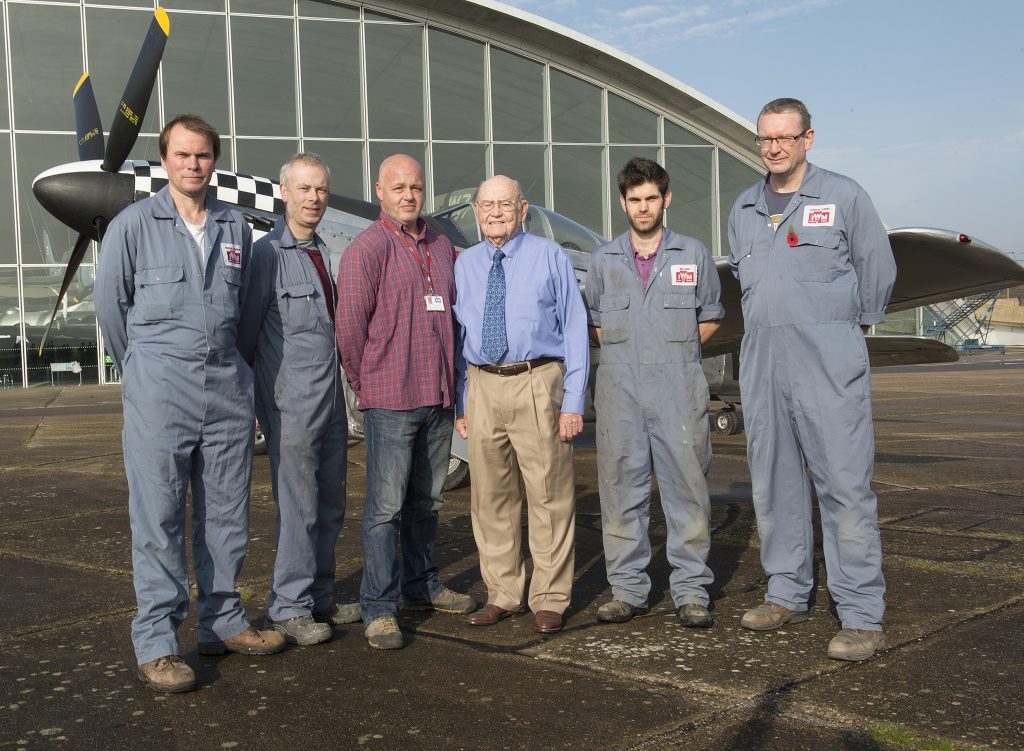 Huie with the conservation team at IWM Duxford. Copyright IWM

“We have further developed our museological standards and have striven to display the aircraft as it would have been when in service at Duxford during the Second World War”, explained Conservation Manager Chris Knapp.

“This better reflects the conditions that the men and women, who took care of the aircraft, worked under during wartime, rather than presenting the aircraft in concourse condition.”

The redevelopment of the American Air Museum is part of IWM Duxford’s aim to help people relate the objects in the museum’s collection to their own lives and to the world in which they live.

The refresh is also designed to help tell the story of the co-operative relationship between the United States and the United Kingdom, which was forged in the east of England during the first and second world wars and how it has shaped the modern world ever since.

In the meantime, Huie’s story can be explored on the new American Air Museum website, which was launched at the beginning of October 2014.

The new site is a digital record of the memories and stories of the men and women of the US Army Air Forces (USAAF) who found themselves serving their country from somewhere in England during the Second World War.

Find out more at www.americanairmuseum.com

IWM Duxford is Europe’s largest air museum with over 300 aircraft and objects on display. Get up close to Spitfires and Hurricanes; see a portion of the original Wright Brother plane; walk through Concorde, feel dwarfed by the size of a B-52 and stand in awe of Europe’s only SR-71…